If you’re lucky enough to be heading to Québec City and you’re considering a stay at the city’s classic Château Frontenac, check out these tips before you book!

Considering a stay at the historic Château Frontenac? 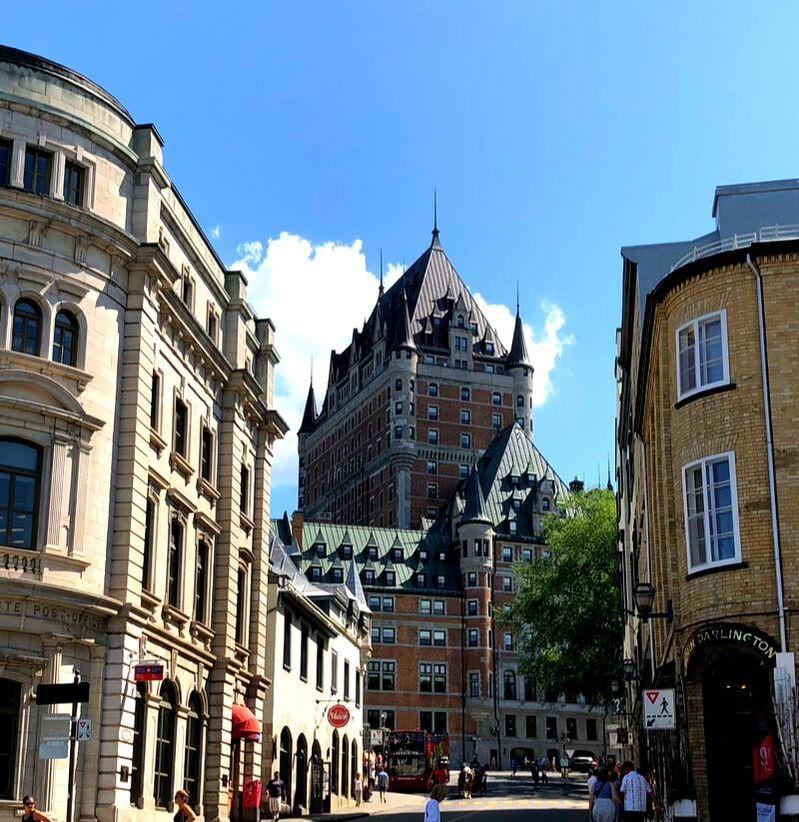 View of the Château Frontenac from the shopping district

The stunning ChâteauFrontenac recently celebrated its 125th anniversary. Since the turn of the 20th century, the Château has been standing guard over the gorgeous Québec City.

​Originally built as a railway hotel by the Canadian Pacific Railway and modeled on a Loire Valley chateau, the Château Frontenac was meant to house travelers as they traversed the wide expanses of the Canadian landscape, and, of course, to encourage them to use the Canadian Pacific Railway to get there! There are several of these hotels across Canada (one of my ultimate travel dreams is to visit them all). If you’re a fan of Murdoch Mysteries, the Château Frontenac truly feels like it popped straight out of an episode.

The Château Frontenac has been expanded many times, even as recently as 1993. The resulting construction is a stunning behemoth – complete with hundreds of guest rooms, shops, restaurants, and views that can’t beaten!
For 5 reasons you’ll love Quebec City, check out the full post!

Château Frontenac: Getting There 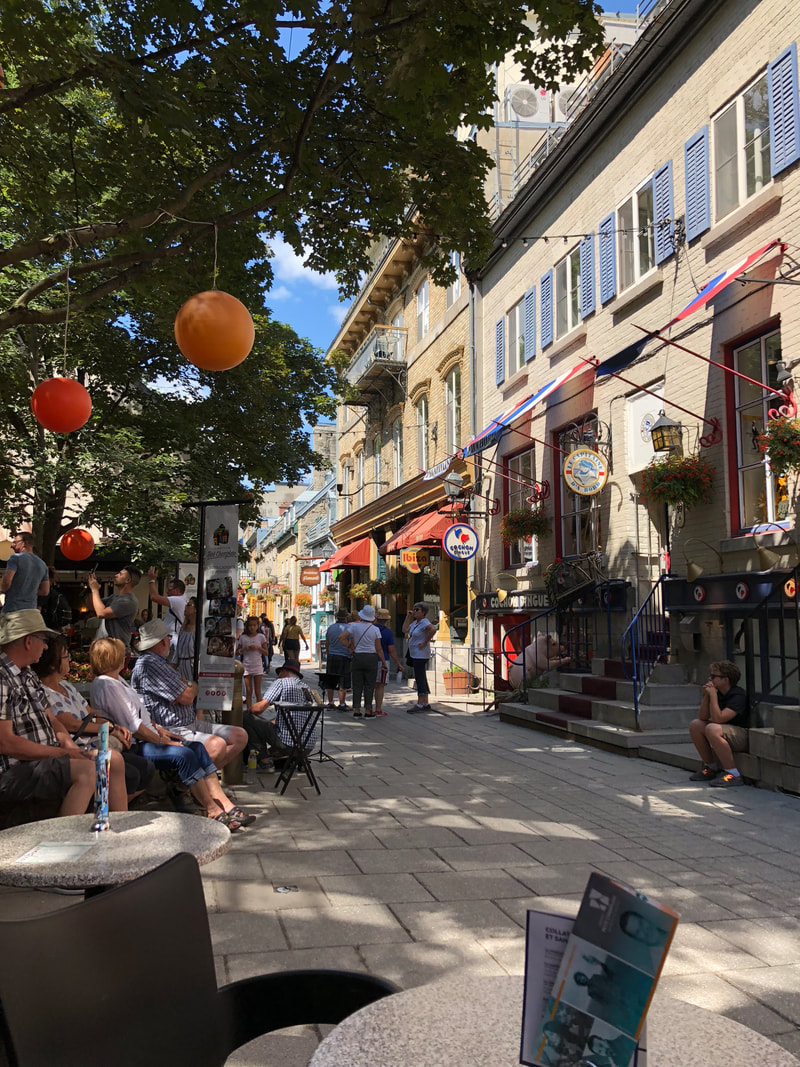 Château Frontenac is conveniently located in the middle of the “tourist” district in Québec City – more on that later. We actually arrived by *train* from Montréal (which, incidentally I highly recommend), so we hopped in a cab from the train station, which took us up the hill to Château Frontenac. If you’ll be arriving/departing via plane, Québec City’s Jean Lesage International Airport is about a half an hour’s drive away.
Chateau Frontenac: Location

Québec City itself is a phenomenal tourist destination. It’s a taste of Europe, without crossing the ocean. With the Old Town covering a stunning bluff over the St. Lawerence River, you’ll find plenty to do, walking the streets and visiting the shops and restaurants, in both the Upper and Lower portions of Vieux Québec.

The Château Frontenac itself is in the Upper Town – which is easily accessed by the Funicular, if you aren’t feeling up to the trek up the “Break Neck Stairs,” which connect the Upper and Lower Town. But, it’s worth taking the stairs down, at least, if you can! We walked up and down the vast majority of the time, aside from a joy ride on the Funicular. Honestly, the stairs just aren’t that bad.

Restaurant on the Petit Champlain

A couple restaurants we liked in and around Vieux Québec, in addition to those at the Château Frontenac:

Taverne Louise (Lower Town – out by the water) 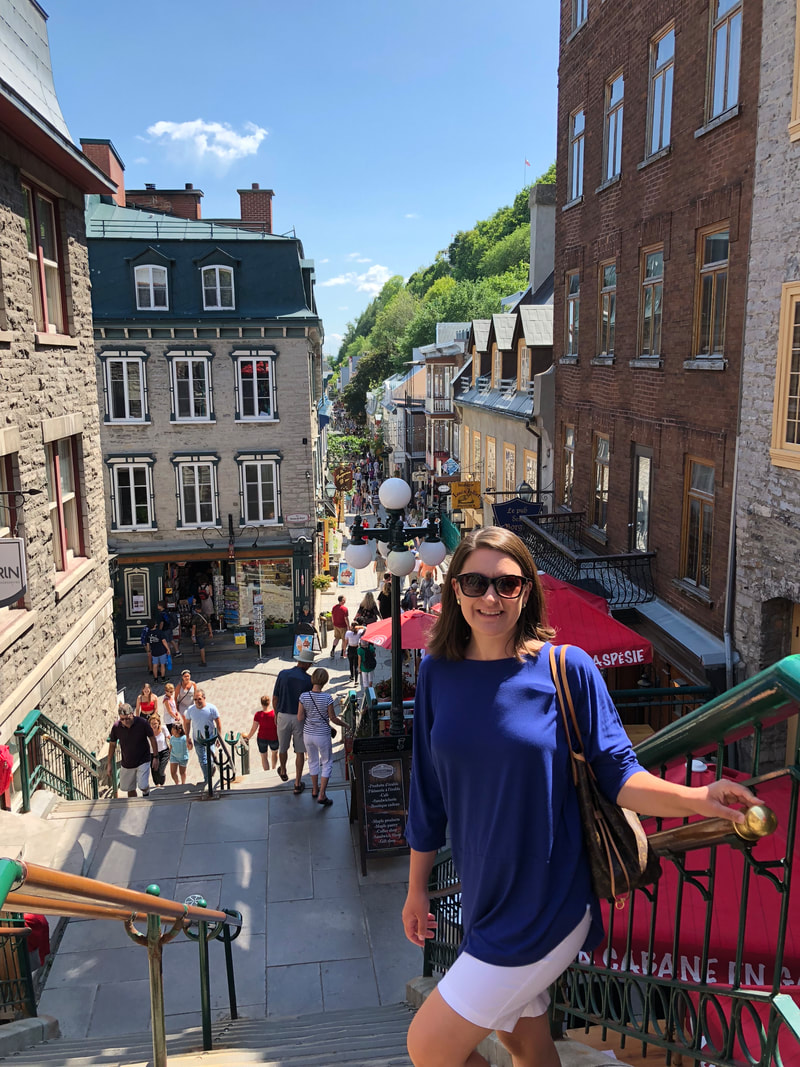 The Château Frontenac is the highlight of the town – the pinnacle of the bluff, on the Dufferin Terrace (seen below), a sprawling boardwalk, named for Lord Dufferin, the third Governor General of Canada, who persuaded the citizens to save the old city walls and Château Frontenac, ultimately leading to Old Quebec becoming a UNESCO World Heritage site. 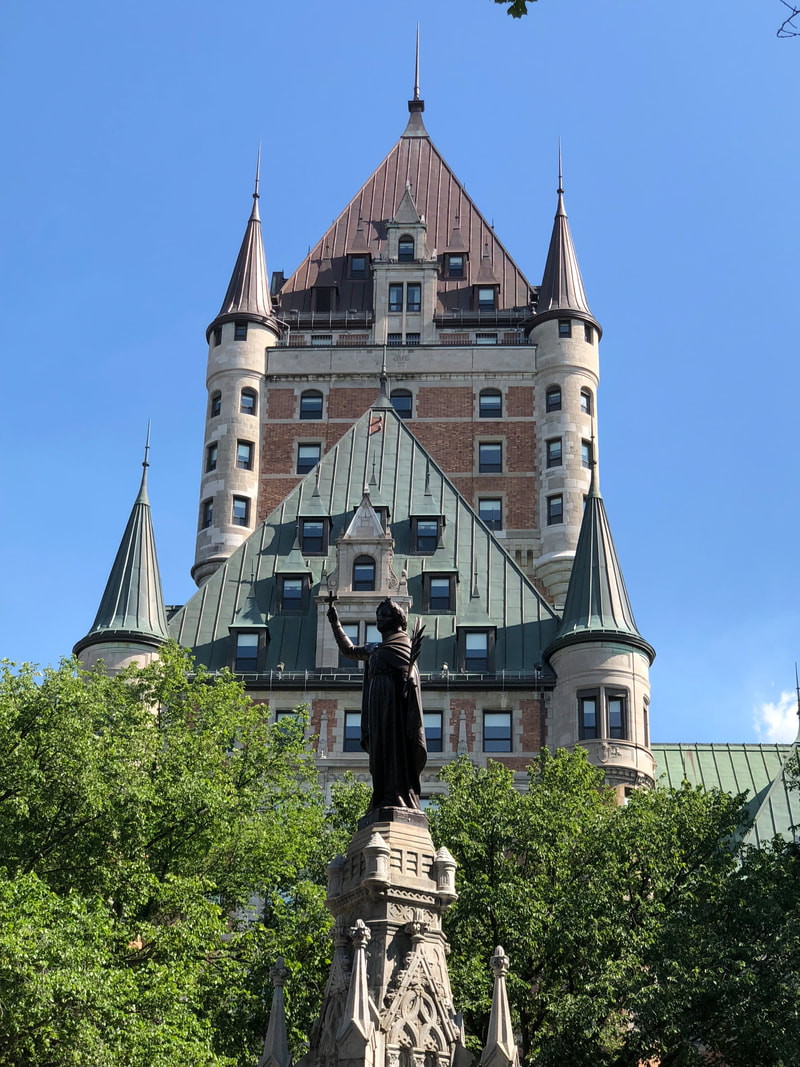 Is the Château Frontenac crowded?

Even if you don’t end up staying at the Château Frontenac, you’ll certainly be stopping by, just to look, or for a drink or dinner at its lovely bars and restaurants, as the Château absolutely dominates the Upper Town. That said, one of the main “complaints” I read about while selecting the hotel does have some basis in fact.

​The Château Frontenac is positively crawling with tourists, popping into the lobby, the Starbucks, and throughout the basement areas (of which there are many, including a number of displays). If you’re visiting Québec City in the height of summer, like us, this likely won’t bother you as, let’s be honest, you weren’t expecting a quiet retreat! But, I do understand that some guests feel like they can’t get any respite from the tourist grind, even in their own hotel. 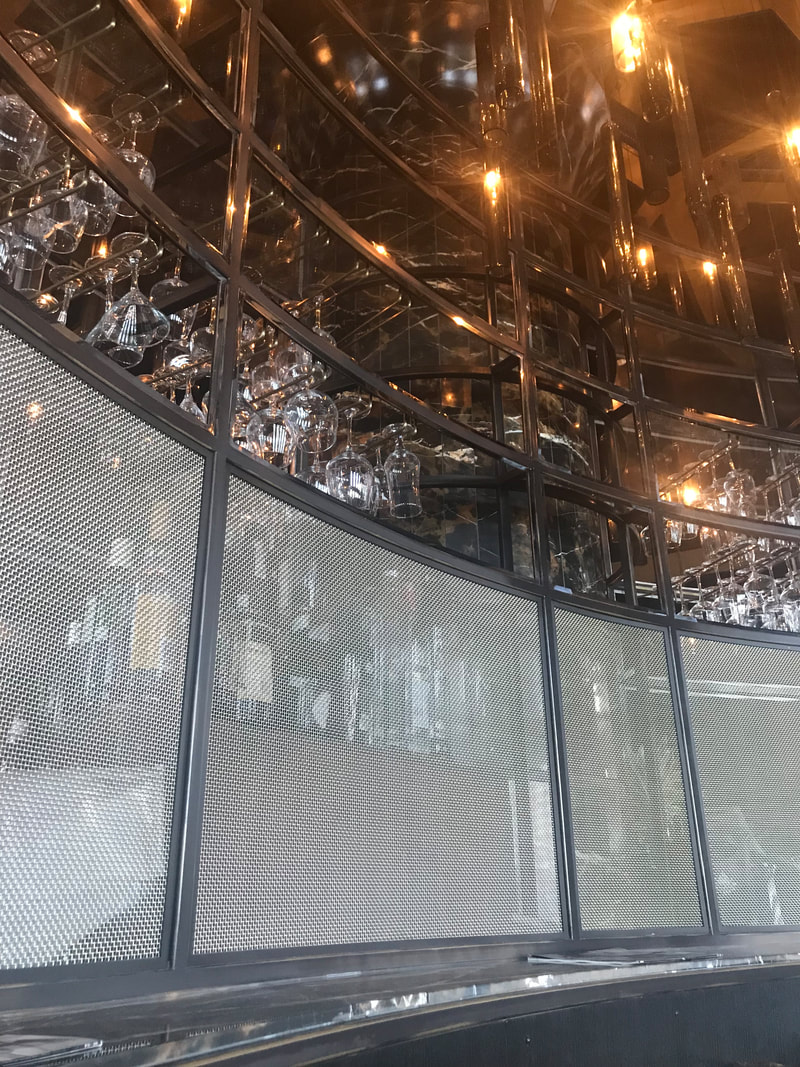 The Château, being basically a city unto itself, has a number of restaurants: Champlain Restaurant, the most formal of the restaurants – you’ll want a reservation!; 1608 Wine & Cheese Bar, the incredible bar with stunning views of the St. Lawrence River (the easiest to drop by, even if you aren’t staying at the Château); Bistro Le Sam, Champlain’s less formal counterpart; and Place Dufferin (breakfast in the lower level), in addition to a (very crowded) Starbucks right on the Dufferin Terrace.
We stopped by 1608 several times – check out this gorgeous gin and tonic! Personally, we enjoyed exploring the city’s restaurant offerings, but having a drink per evening in 1608. It’s good people watching, the drinks are amazing, and the views are even better!

Like I said, even if you aren’t staying here, definitely come in for a drink! And if you are staying here, I wouldn’t plan to eat all your meals at the hotel, as the restaurants are quite high-end/packed in the high season.

The Château Frontenac is absolutely massive, with a large variety of room types and sizes, many of which are differentiated based on the views they offer. And, of course, be warned, they don’t all have stunning views of the water. In fact, many of the rooms have internal views, even at the higher price points, which I did find a bit surprising. 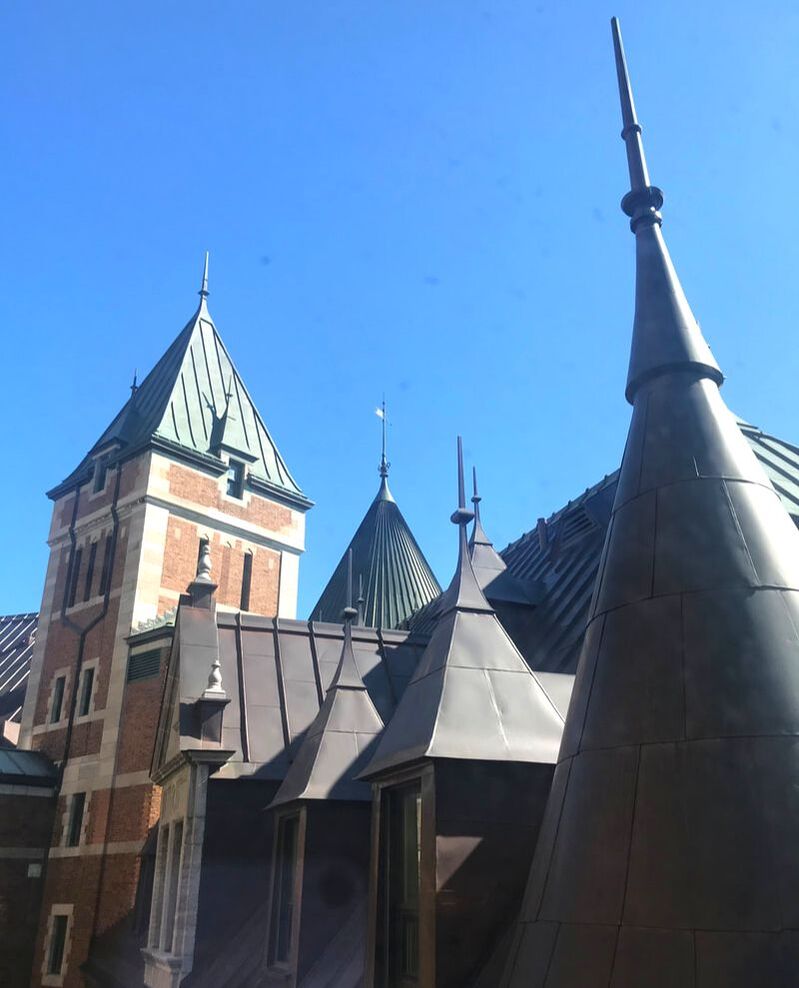 We opted for the Deluxe King – which had plenty of space, a nice view of the interior of the hotel, and a marble bathroom. We actually had our own little turret in the corner, which I found endlessly exciting. That said, this is an old, and popular, hotel, and, for North America, the room was not large for the price.

And yes, I’ll acknowledge that my European friends will think the rooms are insanely large – but things are big out here and people are accustomed to desks and sofas, even in basic hotel rooms 😉

Is there a language barrier in Québec City?

If your French language skills have escaped you, never fear! The Château Frontenac staff speak English and you won’t have a problem finding your way around the town, using English. You may encounter some issues with random, more obscure vocabulary words (I helped an American guest order “oatmeal” at the Starbucks in the Château), but thank goodness for smart phones! If even better, you want to practice your rusty French skills, the Quebecois are unfailingly kind, and will let you try it out.

​If you are looking parler français, do tell them you’d like to practice though, or else they’ll sense your struggle and immediately switch to English, thinking they’re making you feel more comfortable by abandoning French. 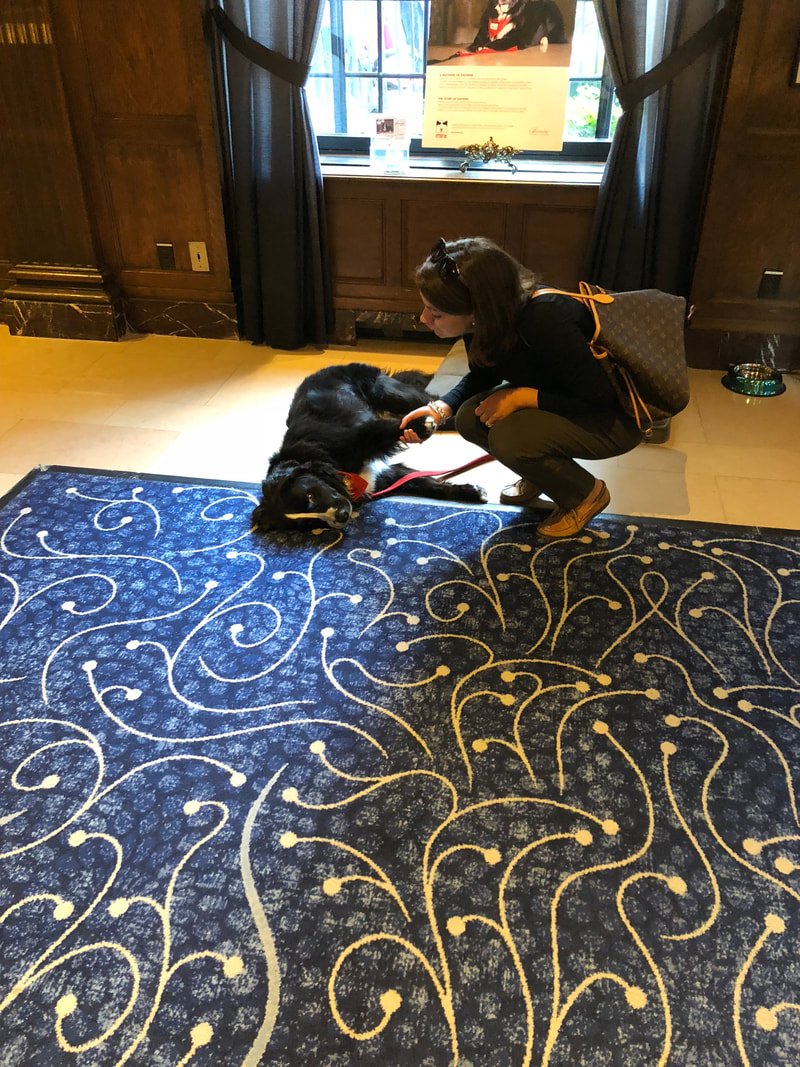 And, you’ll be greeted at Château Frontenac by the official hotel greeter, Daphne, who is extraordinarily welcoming (and sleepy).

​Her English and French are excellent. Her ability to stay awake? Not so much.