Australia is home to hundreds of incredible beaches, but what you may not know is that this country is also home to some of the greatest mountains – and some of the most magnificent views – in the world. From snow-covered summits – yes, there are some parts of Australia that are cold enough for snow – to dense forests and waterfalls, Culture Trip encourages you to enjoy and respect these mountains. Remember to take many photos, but only leave your footprints behind you. 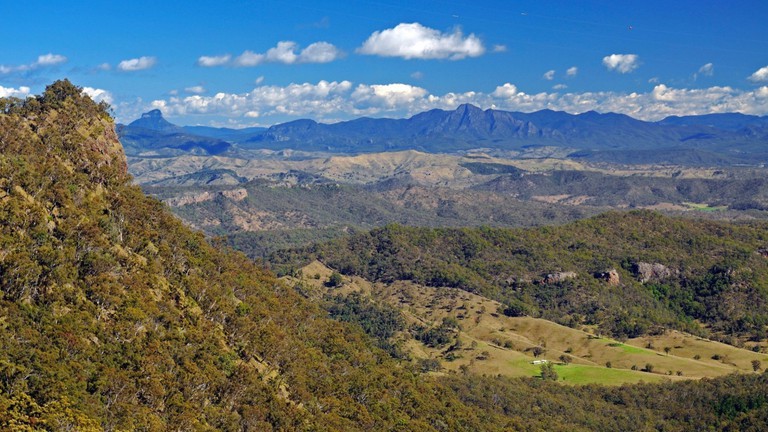 Discover the remote areas of the famous Gold Coast, where lush rainforests and ancient trees thrive and spectacular views are more than expected. In the western end of Lamington National Park a chain of mountains are found – known as the Green Mountains – in an area called O’Reilly. As you wander through the forests, creeks and waterfalls you can’t not become one with nature as you’re surrounded by the popping calls from the mountain frogs, and the sights of the regent bowerbirds, leaf-tailed geckos and the rufous scrub-birds. Whether you want to take an easy stroll around the base of the mountains or take a full-day hike to the summits, there are walks catering for all levels, ranging from 1.2km (0.75mi) to 24km (15mi) in length. For those who take the plunge and hike to the top you will be met with dramatic views across the Gold Coast, Southeast Queensland and the northern parts of NSW. Only a one-hour drive from Brisbane, be sure to head there in the cooler months between April and October for an adventure like no other.

Not far from the Queensland-NSW border lies the fifth-highest mountain in Queensland, and a popular destination for bushwalkers and campers alike. Said to be one of the most impressive parts within the Scenic Rim Region (and forming part of the McPherson Range), Mount Barney offers a variety of bushwalking routes that only the experienced should take; even the maintained tracks around the base of the mountain are still quite steep, with rock-scrambling skills required. Surrounded by many other mountains – including Mount May, Mount Ernest, Mount Ballow, Mount Maroon and Mount Lindesay – the Mount Barney National Park was established in 1947 to protect the peak and the traditionally significant land for local Aboriginal people. Home to many rare animals and plant species, a journey through the national park can’t be missed. 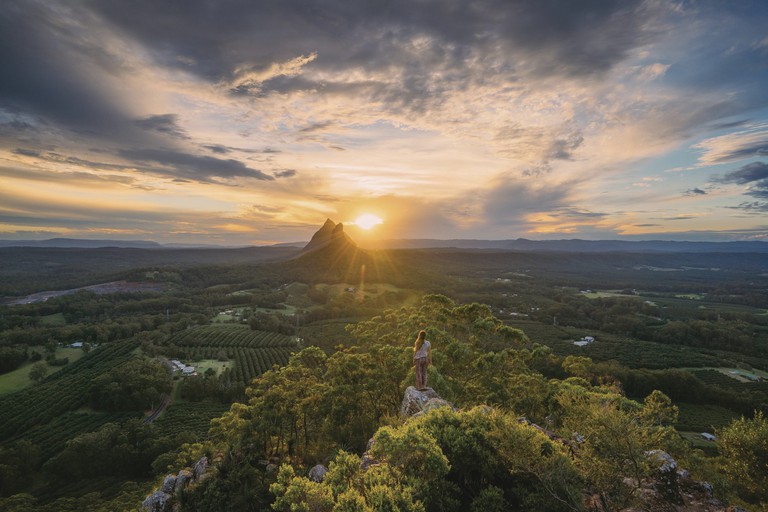 Forming a landscape of national significance that offers sweeping views, and located on the Sunshine Coast, is a group of 11 hills that are collectively known as the Glass House Mountains. Just over an hour’s drive north of Brisbane are the remnants of the volcanic activity that occurred 25-27 million years ago, which were added to the Australian National Heritage List in 2006. These impressive formations are culturally significant to the Gubbi Gubbi people – the traditional owners – as a special meeting place for ceremonies and trading between the Aboriginal people. Further, these hills are a part of the Aboriginal legend of a family: the most identifiable hill (Mount Tibrogargan) is the father; the highest hill (Mount Beerwah) is the pregnant mother; and the other mountains are their sons and daughters. Although all offer unobstructed views, only Mounts Tibrogargan and Ngungun are open to the public with walking tracks ranging from easy to very challenging.

Informally known as The Snowies, the Snowy Mountains are the highest mountain range in Australia, forming a part of the Australian Alps in the southeast area of NSW. Located within this collection of mountains is the highest peak on the Australian mainland, Mount Kosciuszko, standing 2,228m (7310ft) above sea level. Mount Kosciuszko was declared a World Biosphere Reserve by UNESCO in 1997, giving this year-round “nature and adventure playground” international significance. Although a distinct snow experience from early June to early October is on offer, the weather here can be extremely unpredictable. For those wanting to soak in the magnificent views on offer in the warmer months, you can enjoy the popular 18.6-km (11.5-mi) summer trek that takes six to eight hours to complete from Charlotte Pass. With a picturesque stop at Snowy River for a picnic, this will be a hike to remember. 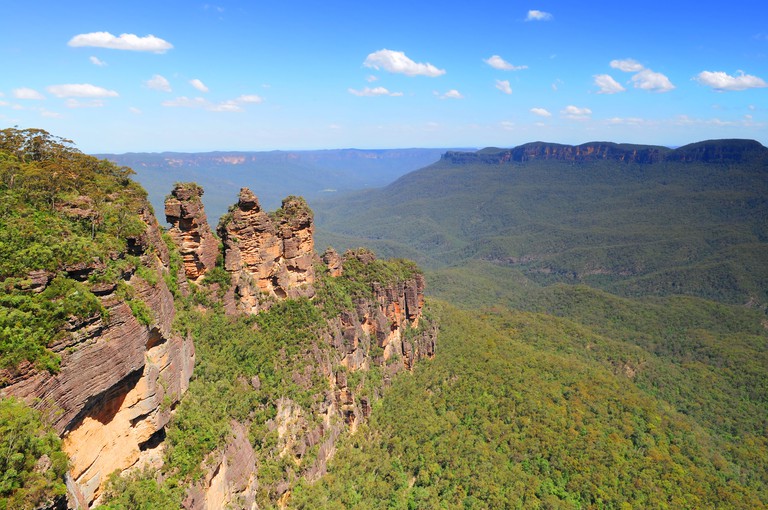 One of Australia’s most spectacular natural parks and a perfect holiday for families, adventure seekers and nature lovers alike is a trip to the Blue Mountains National Park. About a one-hour drive to the west of Sydney lies steep cliffs, waterfalls, eucalyptus forests, bushwalking trails, underground rivers within the mountains and the ancient caverns of the Jenolan Caves. With UNESCO World Heritage status, the dramatic scenery accessible from lookout points across the Blue Mountains are unlike any other; as the mountains are covered in a slate-covered haze from “fine mist of oil exuded by huge eucalyptus” throughout the region. From the popular Echo Point, the historic Three Sisters sandstone rock formation can be seen, while a magical picnic can be enjoyed at the ethereal Wentworth Falls. Standing up to 1,215m (3,986ft) above sea level, these mountains have plenty to offer for all visitors. 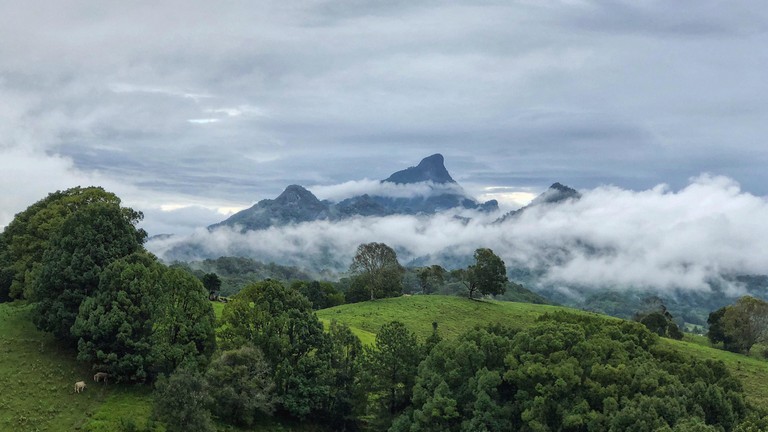 Be among the first people in Australia to see the start of a new day as the sun rises over the famous natural landmark of the Tweed Range, in the Northern Rivers Region of NSW. Holding a dual name – named Mt Warning by Captain Cook, and Wollumbin (meaning cloud catcher) by the Aboriginal community – this mountain is the first place on the Australian mainland that is touched by the morning sun every day. Offering a jaw-dropping 360-degree view of one of the largest ancient calderas found in the world, alongside coastal views from Byron Bay to the Gold Coast. However, under the Bundjalung law only certain people who are believed to respect the heritage of this land are granted access to climb Wollumbin within the Wollumbin National Park. Surrounded by falls and dams, and many bird species, insects, lizards, plants and fungi, the steep 8.8-km (5.5-mi) return trip is well worth the touch of the morning sun.

Whoever said it doesn’t snow in Australia has clearly never travelled to some of the country’s most popular – and incredible – ski resorts. Known as the highest ski resort in Victoria, and located within the Victorian Alps of the Great Dividing Range, is the infamous Mount Hotham, offering accommodation in a luxury alpine village for those wanting to enjoy the snow season (early June to late September) 1,861m (6,106ft) above sea level. With a range of snow sports available across 320ha (791 acres) of ski terrain for all abilities, you can enjoy the chill of winter by skiing, snowboarding, cross-country skiing, tobogganing, dog sled tours and snowmobile rides. Featuring a spectacular sunset across the snow and over 20 bars and restaurants to enjoy a hot chocolate – your winter escape choice shouldn’t be too hard. 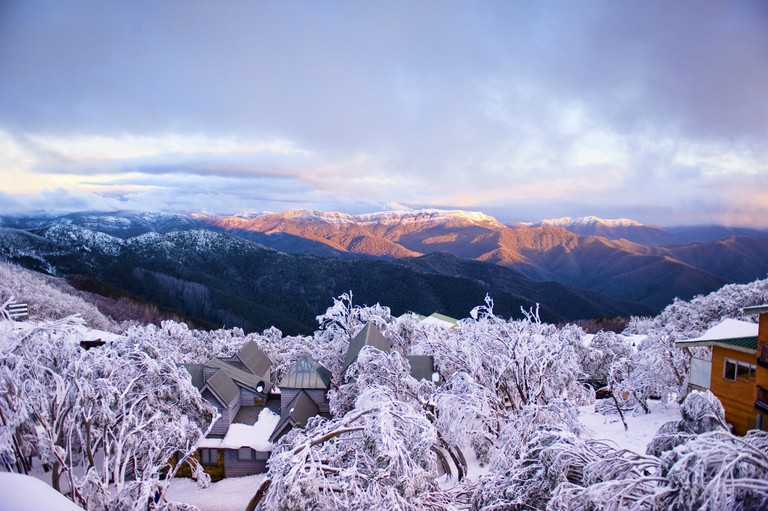 Another of Australia’s popular snow destinations is the most accessible major snow resort at Mount Buller. With over 300ha (741 acres) of terrain appealing to all levels from beginners to ultra cross course – and even tobogganing – snow enthusiasts from across the nation and around the world are sure to have this summit on their bucket list. A three-hour drive from Melbourne, and a height of 1,780m (5840ft), Mount Buller offers skiers and snowboarders a spectacular view of the town below as they descend the snowy slopes. So, grab your snow boots, and plenty of warm clothes and head to the snow without having to fly to the northern hemisphere.

Close to Mount Hotham lies the second-highest mountain in Victoria. Mount Feathertop is a member of the Australian Alps, and is located within the Alpine National Park. It rises to 1,922m (6,306ft) above sea level, and is usual covered with snow between June and September. Although this mountain offers spectacular skiing in winter, the summit becomes rather picturesque in the summertime. Along the popular 11-km (7-mi) Razorback Trail, which takes roughly four hours one way, a view across the surrounding mountains and valleys that make up Northeastern Victoria can be seen, and shouldn’t be missed. However, do be wary that Mount Feathertop has very steep summit slopes, unlike the rounded summit dome of the majority of Australia’s summits. 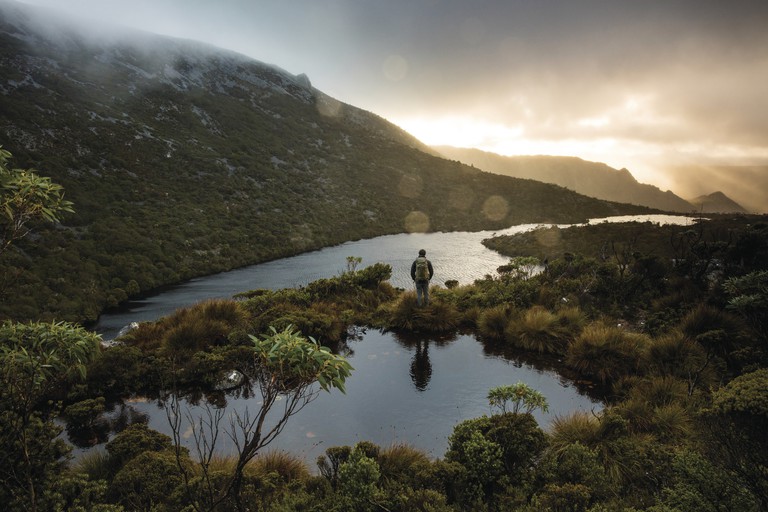 One of the most popular natural areas in Tasmania’s Central Highlands Region is the dramatic Cradle Mountain, situated in the northern end of the Cradle Mountain-Lake St Clair National Park. Standing at 1,545m (5,069ft) in height, this “jewel of the park” is part of the Tasmanian Wilderness World Heritage Area: offering a wild landscape full of ancient rainforests, fragrant eucalypt forests and alpine meadows – home to many wildlife species including the Tasmanian devil, echidnas, quolls, platypus and several bird species. Cradle Mountain offers the chance to discover the richness and beauty of nature in one place, with the world-famous Overland Track – Australia’s premier alpine walk, travelling across 65km (40mi) of the finest mountain terrain in six days. If you want to enjoy this unique walk it is recommended that you book in advance during the warmer months. However, if you’d rather enjoy a different perspective, you can take the phenomenal two-hour walk around Dove Lake at the base of the mountain. Magical doesn’t even begin to cover it.

Although snow is much more common along the East Coast of Australia, Bluff Knoll is one of only a few places that experience regular snowfall within Western Australia. Standing at 1,099m (3,606ft) above sea level, Bluff Knoll is the highest peak in the Stirling Range located in the Great Southern Region of Western Australia. Featuring soaring cliffs and misty moods, the 6-km (3.73-mi) round trip walk to the top is the most popular choice in the Stirling Range. Taking you down to a creek before heading uphill through the eucalypt woodland, grass trees and banksia that line the lower slopes, and further upwards, this area is home to more plant species than the entirety of the British Isles; with over 80 varieties said to only be found here. Also known as Pualaar Miial (great many-faced hill) by the local Aboriginal people from the Koreng and Qaaniyan tribes, and Bular Mial (many eyes) by the indigenous Nyoongar people, this peak is a popular day trip for locals and tourists alike. 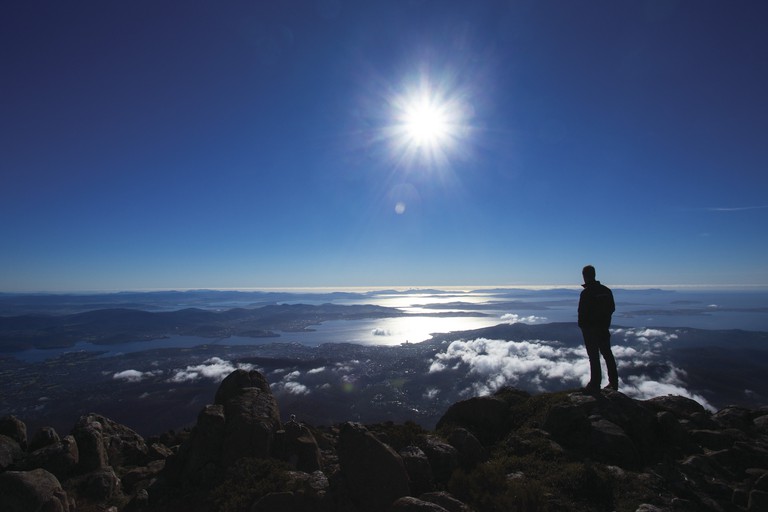 Connecting to the urban landscape of Hobart, and offering magnificent views of the city and surrounding areas, is Wellington Park. Within this protected reserve lies Mount Wellington – known as Kunanyi by the Palawa people, surviving descendants of the original indigenous Tasmanians – which stands at 1,271m (4,170ft), and towers over the city alongside other mountains: Sleeping Beauty, Collins Cap and Cathedral Rock. This summit is often covered in snow, even in the summertime, and offers a wealth of wilderness just a 20-minute drive from the city. Whether you want to take on one of the historic walking tracks or enjoy a horseback or mountain-bike journey through the park, there are 500 native plant species to be discovered. Due to the chilly weather conditions within this park, be sure to check the forecast before heading out.

Five Ways To Enjoy Your Time in Cairns, Queensland, Australia