Set on the southernmost tip of Hawaii’s Big Island, the picturesque area of Papakolea on Mahana Bay is home to one of the only green beaches in the world. 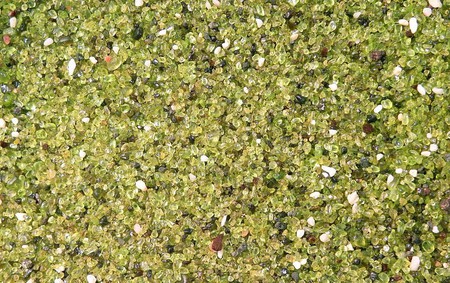 Just beneath Mauna Loa, the largest volcano in the world, centuries of activity created quite the spectacle. From afar, Papakolea looks as if it’s covered by a large amount of moss against a gray cliffside. Upon closer inspection, you’ll find tiny beads of green sprinkled across the sand, along with black and white stones from lava and coral.

The bay is evidence of what used to be a large cinder cone called ‘Pu’u o Mahana’ formed by eruptions from Mauna Loa. These eruptions brought many minerals and stones to the surface, including the semi-precious stone olivine.

Sometimes known as the “Hawaiian Diamond” or “Tears of Pele“, these stones made their way from the erupting volcano to the shoreline, their density preventing them from being washed out to sea.

As the last eruption was over 10,000 years ago, the supply of olivine is slowly running out, either being washed away or broken down by the sea. This is all the more reason for people to catch the natural wonder while it’s still around. 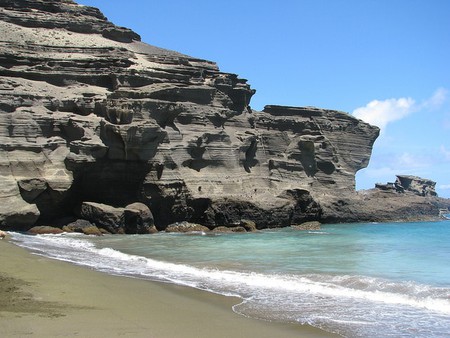 The journey across pasturelands to Papakolea is not for the faint of heart, as it’s about two-and-a-half miles on foot to get there. The walk itself is rewarding, as little gems of ancient Hawaiian artifacts and structures can be observed along the way. There are remnants of ancient heiau, or temples, that are not to be missed. It’s believed that this is where the first voyagers arrived when they discovered Hawaii.

Though the area is a trek to get to, there is a high chance you’ll have the beach to yourself. It’s wise to make the trip in the morning as the sun is stronger and winds pick up in the afternoon. The water on this beach is dangerous and unpredictable and should be approached with caution. The undertow is known to be strong, though people still swim when the water is calmer.

How to get there 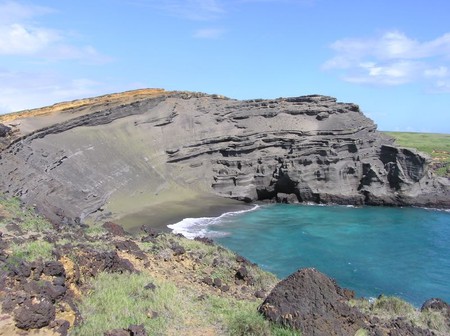 From Highway 11, you’ll find South Point Road in between mile markers 69 and 70. About eight miles down the road, there will be a sign for Green Sand Beach where you’ll find a parking lot. Locals linger here often, attempting to charge tourists for parking and offering rides to the beach on 4 wheelers. This is illegal as driving is not allowed on the property and parking is free for everyone.

Head towards the ocean and take the dirt road to the left. The ocean should be on your right. It’s difficult to get lost as long as you keep the coastline. There are metal stairs that make their way down the side of the slippery cliff and onto the glistening green beach.

Keep in mind – the sun is unforgiving and there is no shade, so prepare accordingly. Bring enough water, sunscreen, and a bag for trash. And remember, as is the rule in most of Hawaii, it is illegal to take the sand from the beach, lest you want to incur the wrath of goddess Pele.

Stunning One-Eyed Cat Who Loves Swimming And Surfing In Hawaii