Some villages look like they were born from rocks and stones, where nature and man become one. Others remind one of the nativity scenes and still others bear witness to landscapes and characteristics of bygone days.

There are many villages to discover in Portugal, and each one will surprise and charm you in its own unique way. It isn’t easy to decide which are the most beautiful, but here is a taste of some of them. 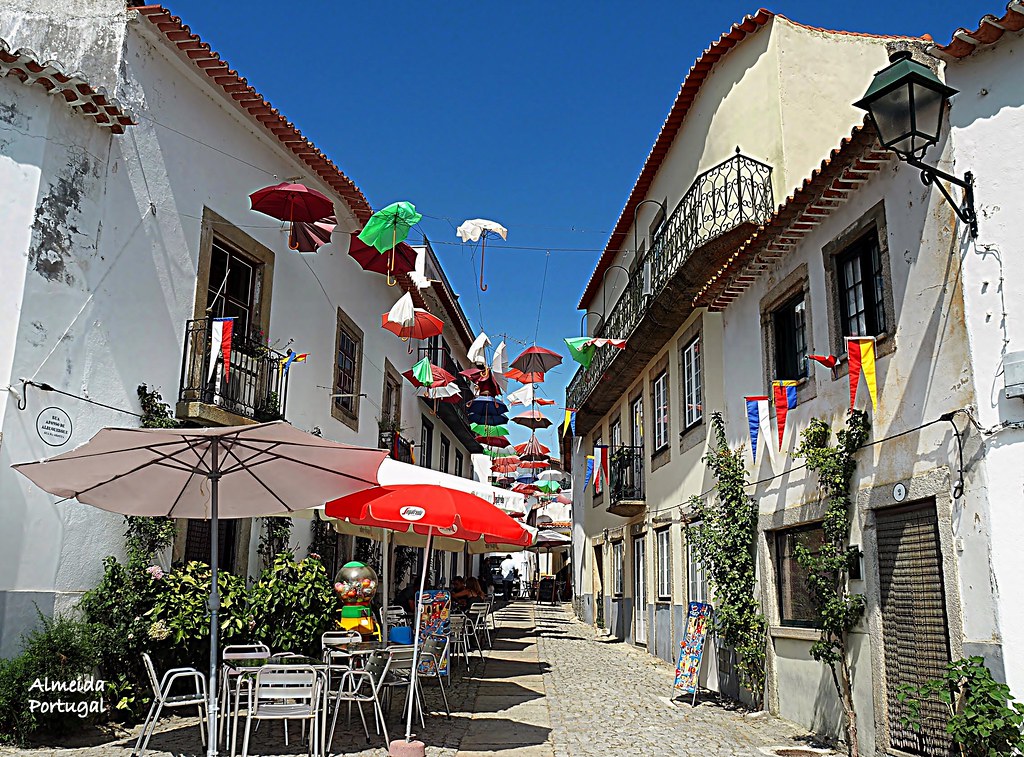 Surrounded by a star-shaped stone wall, Almeida was once one of the most important points in Portugal’s lines of defence, and is now considered one of Portugal’s 12 historic villages.

Overlooking the Côa river, Almeida has many spots which are worth a visit, such as the Gothic castle or the bomb-proof military barracks which were used as shelter during the Seven Year War (1756-1763).

Situated in Cova da Beira, Belmonte is one of Portugal’s 12 historic villages and enjoys a wide view over the eastern slope of the Estrela Mountain. This is, indeed, where its name comes from. Belo Monte, as in Beautiful Mountain.

It is often mentioned as the birth place of Pedro Álvares Cabral — the navigator who commanded the second fleet to India in 1500, during which Brazil was officially discovered — and is also known for its important Jewish community.

The Castle of Belmonte, located at the height of the village, dates from the XIII Century and is one of its main calling cards.

This mostly medieval village has two sets of fortified walls, the Citadel and the Barbican. It used to be a strategic point in the line of defence against the Kingdom of Spain and is therefore also considered one of Portugal’s 12 historic villages.

Beside its large walls, Castelo Mendo still maintains its traditional houses with Manueline-style windows and large verandas. Don’t forget to visit the castle or aim for the medieval fair. 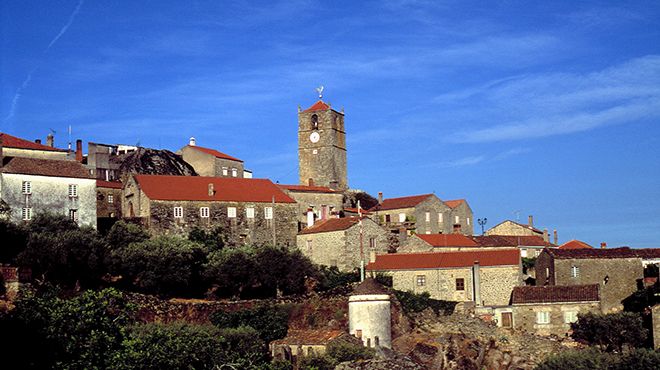 Dressed in tones of green and grey, Castelo Novo is located on the slope of the Gardunha Hill and is one of Portugal’s 12 historic villages.

Its many lordly manors, spread out over a rocky landscape and surrounded by abundant vegetation, make Castelo Novo a must on your tour route. If you do make it there, don’t forget to visit the castle, located at the top of the village, or the river beach.

Located in the district of Guarda, Castelo Rodrigo still maintains some of its medieval characteristics, which is why it is one of Portugal’s 12 historic villages.

Surrounded by fortified walls, the village includes many points of interest, such as the castle, the medieval cistern, the Portas do Sol (one of its main gates) and the ruins of the Cristóvão de Moura Palace. 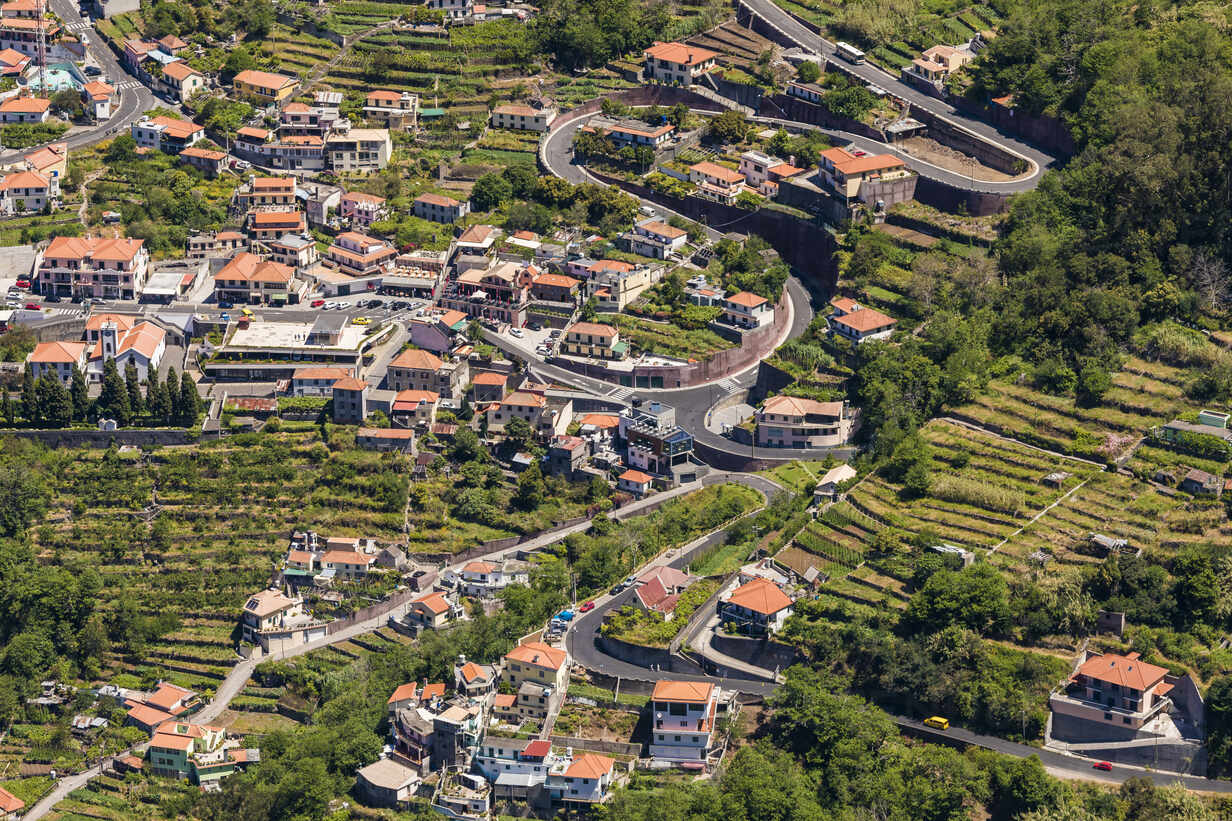 The village of Curral das Freiras sits right in the middle of a volcano crater, surrounded by the lush high mountains of the Madeira Island.

Over the years its almost secret location made it a perfect hideout – not only for the nuns of the convent of Santa Clara, who fled pirate attacks in the XVI Century, but also for runaway slaves and criminals.

One of its main calling cards are the trails which cross the mountains and which in times past were used by residents to reach the capital, Funchal. The long way down to the centre of the village is an extraordinary experience and, once at the bottom, gives you a panoramic view of the island.

The village of Dornes was founded in a peninsula in the middle of the Zêzere River, and a bird’s eye view quickly shows that it is one of the most beautiful in Portugal.

Named one of the seven wonders of Portugal in the category of “riverside villages”, Dornes is famous for its Pentagonal Templar Tower, the first of its kind to be built in Portugal.

If you make it over, take the opportunity to go for a dive or a boat ride in the waters of the Castelo de Bode dam.

One of the main attractions of the island of São Jorge, in the Azores, this village was elected one of the wonders of Portugal. Fajã dos Cubres is a natural beauty, with a unique lagoon system, as well as classified and protected landscapes and fauna.

Its attractions include the traditional houses and settlements, the Nossa Senhora de Lourdes hermitage, which dates from 1908, the waters of which are considered miraculous by the locals. 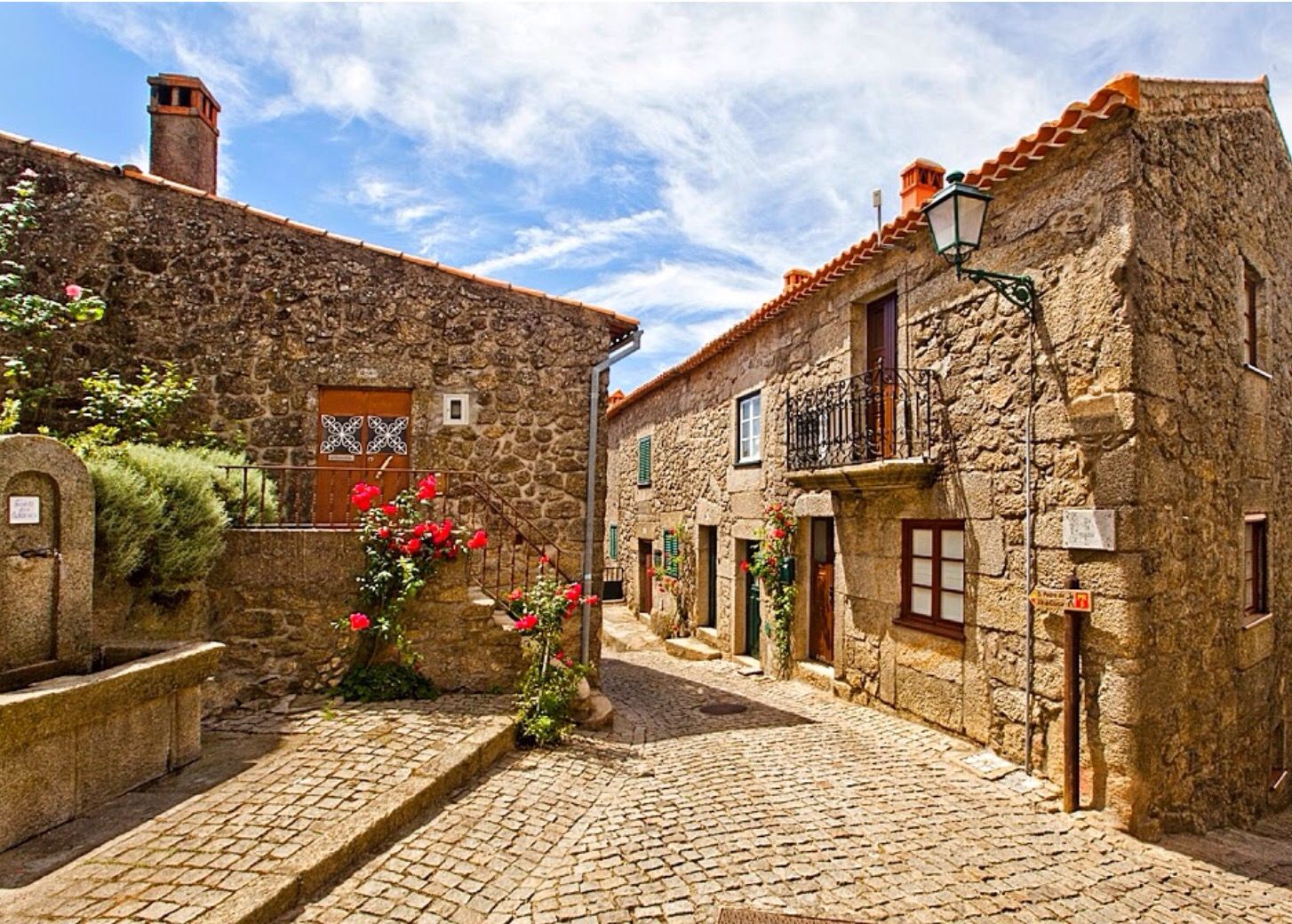 The many ruins which can be found among the olive groves make Idanha-a-Velha a life-size museum and also got it into Portugal’s 12 historic villages list.

Among its many attractions, the renaissance mother church, the XVII Century pillory and the ruins of the Templar’s tower, which includes traces of the Roman, “Reconquista” and Middle Ages eras, stand out. 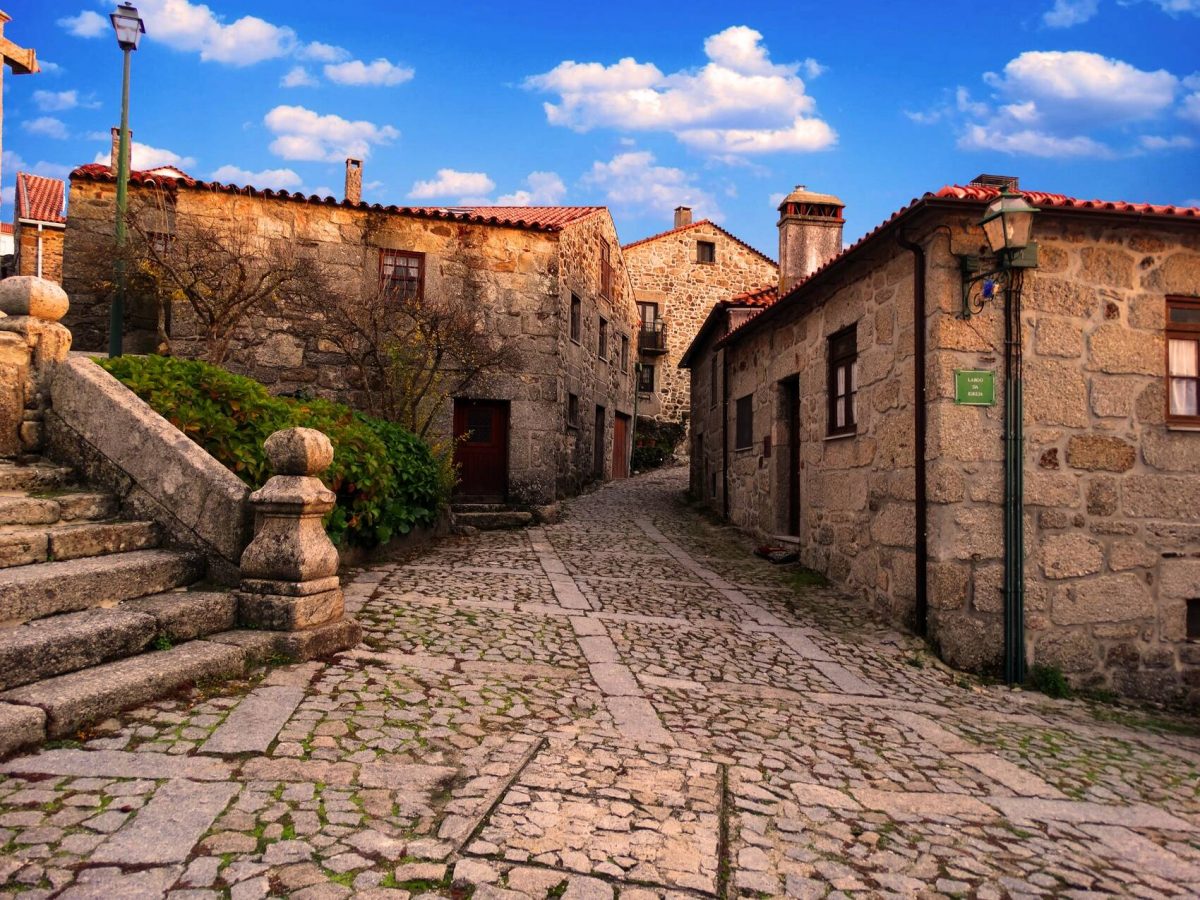 A walk through the streets of this village is a trip through time, in the fresh breeze of the Vale do Mondego. Linhares da Beira is one of Portugal’s 12 historic villages, due to its great architectural and artistic heritage, which dates back to the medieval period.

The castle, at a height of 800 meters, was built during the reign of D. Dinis, in the XIII Century, and is the village’s main calling card. Once you’re up there, stop a while to look out over the plains which surround the village.

Marialva is one of Portugal’s 12 historic villages and stands on a hill, overlooking the knolls and cliffs of the surrounding granitic and mountainous landscape.

As soon as you enter the village you’ll be overcome by the feeling of being in a historic setting, with streets that lead to the walled citadel. Don’t miss out on the chance to go within the walls and visit the square, the keep and the church of Santiago. 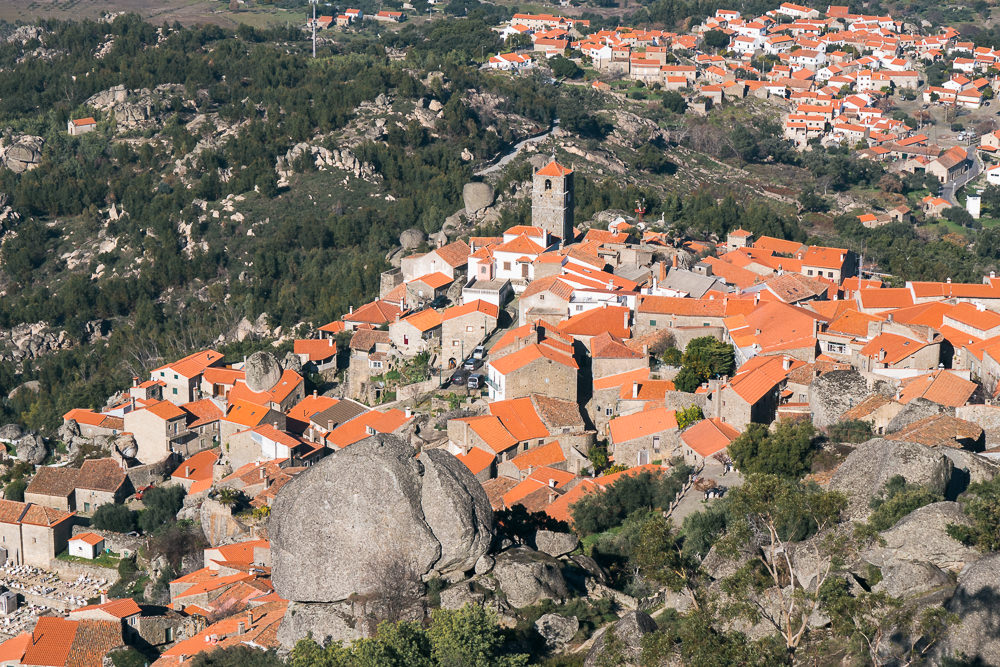 If we had to name one village where man and nature are as one, it would be Monsanto. Hewn out of the rocky hillside, here the houses are rocks and the rocks are houses. Odd? Not in Monsanto, where the locals used boulders as walls or even as roofs for their homes.

Tranquil, enchanting and located in the Beira Baixa region, this is certainly one of the most beautiful villages in Portugal. Indeed, in 1938 it was even voted the most Portuguese village in Portugal. 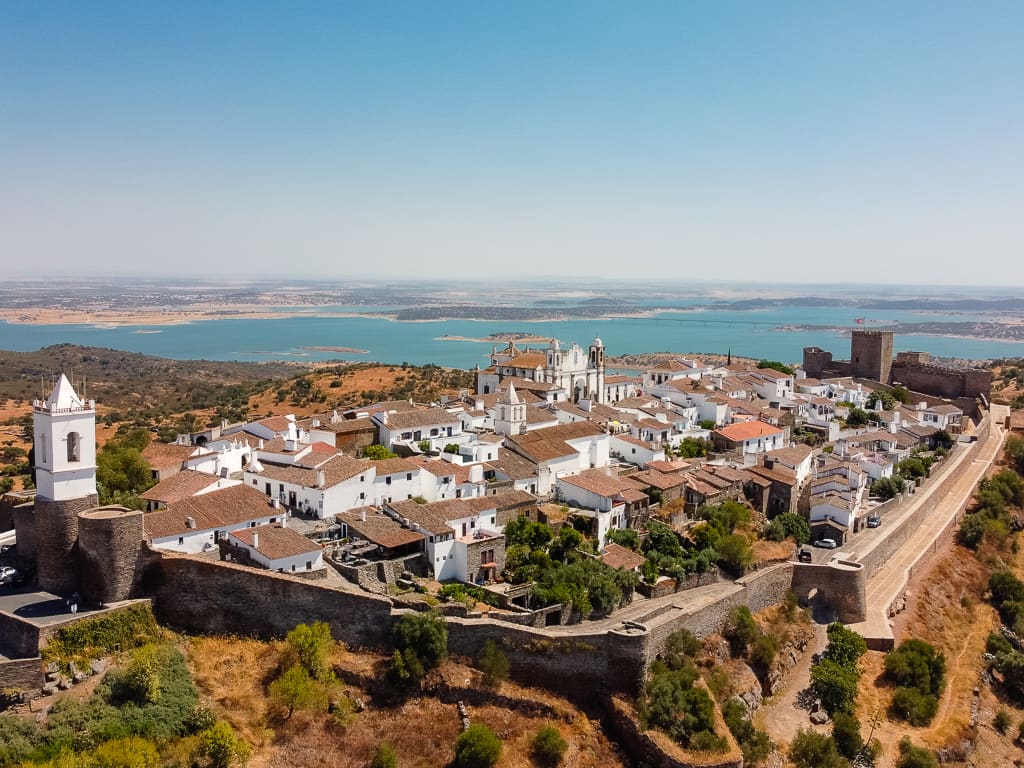 Situated on a hilltop, commanding a view over the Guadiana river, the white houses, cobbled streets and 150 monuments in Monsaraz tell a story that is over 5000 years old.

If you visit this location, which was elected one of the seven wonders of Portugal in the “Monument Villages” category, make sure to visit the imposing castle, which for centuries watched over the border with Castille. 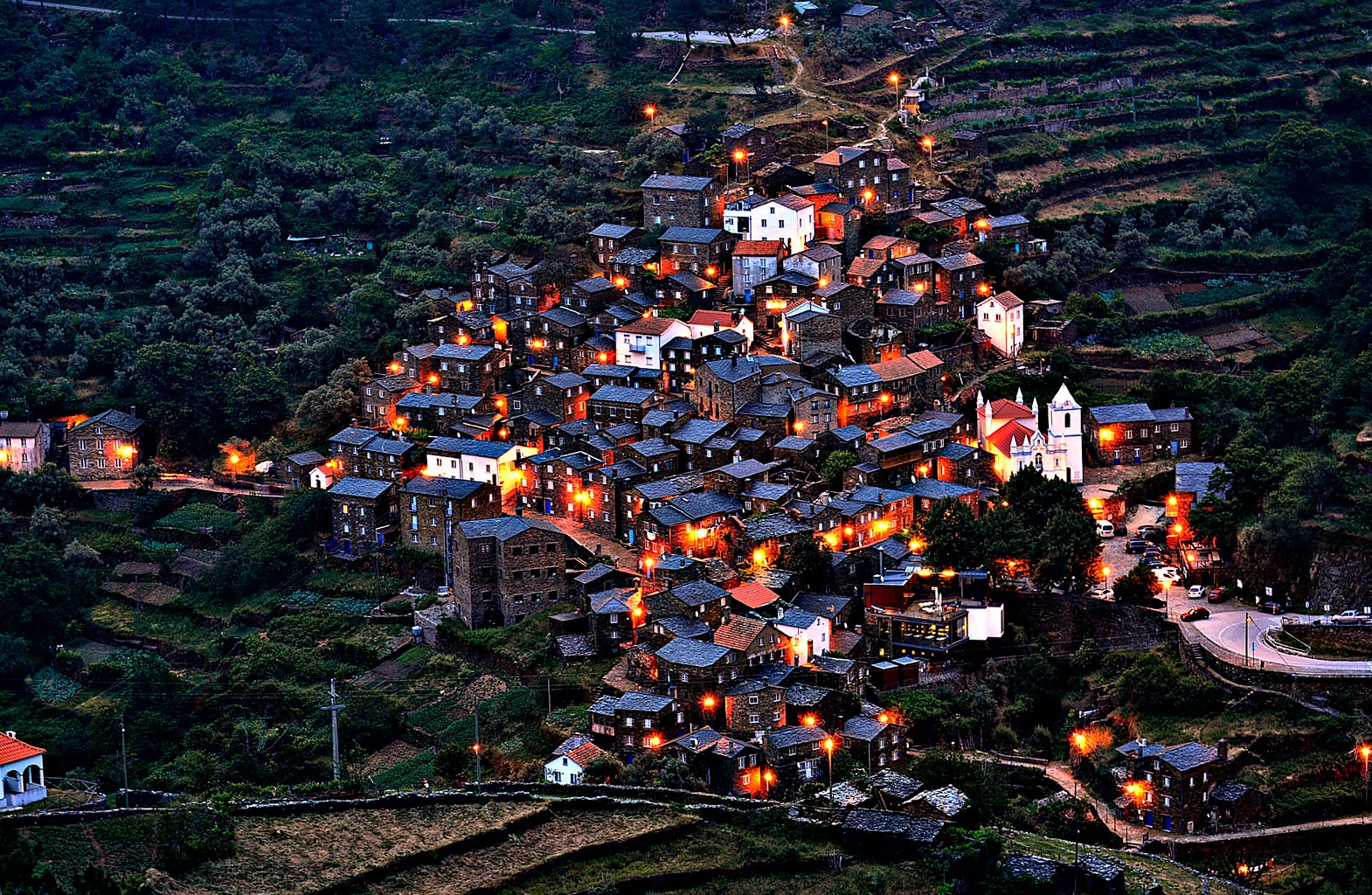 One of the most beautiful villages in Portugal is located in the Açor hill, in the council of Arganil.

The houses, made of shale and slate and with blue doors and windows, deck the hillside, making the whole thing look like a nativity scene, an image which is only confirmed by the street lights at night.

Its beauty earned it a place in the seven wonders of Portugal, in the “Remote Villages” category. Pride of place in this blue and shale landscape, goes to the mother church, with its cylindrical towers, which dates back to the XVII Century.

Rio de Onor is special. Located in the Northeast of the Trás-os-Montes region, it is part of the Montesinho Nature Reserve, and is divided between Portugal and Spain. Rio de Onor on the Portuguese side, and Rihonor de Castilla on the Spanish.

This is a community village, where the inhabitants share the oven, the mill and their land. Years of life in common between people from both sides of the border led to the birth of the Rionorese dialect. The rural administration is led by two stewards, appointed by family representatives. If you visit, don’t forget to cross the Roman bridge which crosses the river that gave the village its name.

Rio de Onor was named one of the seven wonders in the “Protected Area Villages”.

The green terraces where the locals plant their crops and graze their cattle has earned it the nickname of “Little Portuguese Tibet”. One look at Sistelo is enough to understand that this is one of the most beautiful villages in Portugal. In 2018 the village’s cultural landscape was classified as a national monument.

Sistelo was built next to the Vez river, in the Peneda-Gerês National Park. Don’t miss out on the chance to visit the Castle where the Viscount of Sistelo lived in the XIX Century. For a unique view over the region, go to the Chã da Armada belvedere.

This is one of the seven wonders of Portugal in the “Rural Villages” category.

At a height of 760 metres, Sortelha is a granite village with typically medieval streets and alleys. It is one of the oldest and most beautiful of Portugal’s historic villages, where little has changed over the past 500 years.

With its medieval graves, the Manueline pillory and the renaissance church, a stroll through the streets of Sortelha, in the shadow of the XIII Century Castle, is like travelling through time.

Located on a plateau, with a view over the vast territory between the Estrela Mountain and the Douro Valley, Trancoso enjoys one of those views in which you can just lose yourself.

It is one of Portugal’s 12 historic villages and you can enjoy traveling back to the Middle Ages by visiting the imposing castle and the surrounding walls.

Why Every Traveler Should Visit This Epic Island in The Azores