But all is not what it seems as every single elephant is an orphan and one of the 101 rescued by the Nairobi-based David Sheldrick Wildlife Trust since 2001.

Many of their mothers have been k.i.l.led by poachers or fallen victim to angry farmers. One baby, Ndotto, had to be rescued after getting mixed up with livestock owned by Samburu herders and following them home to their village. 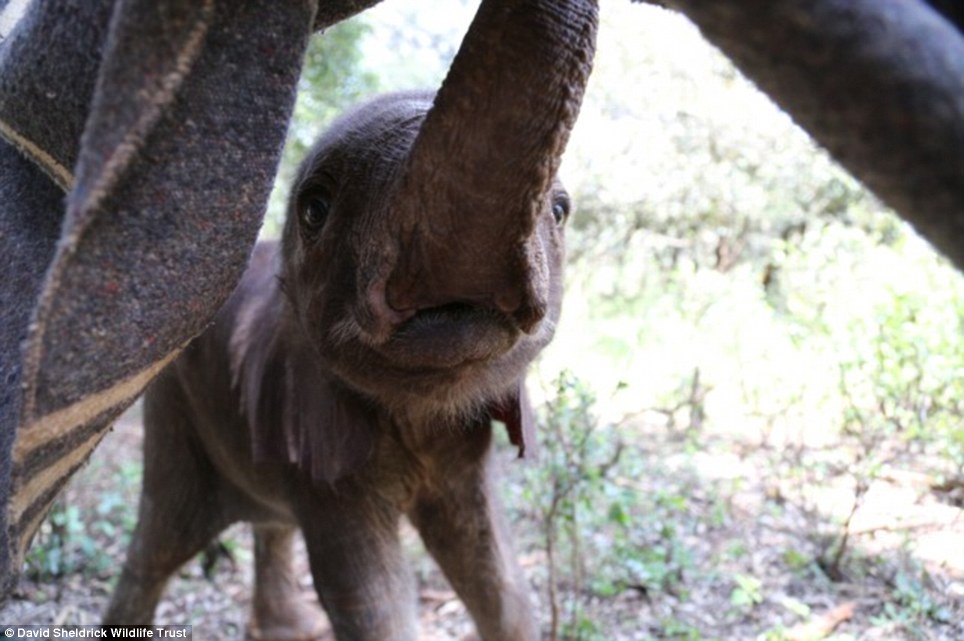 Adorable: Baby elephant Kamok peeps out at the camera from beneath her comfort blanket. The youngest elephants have blankets to remind them of their mothers 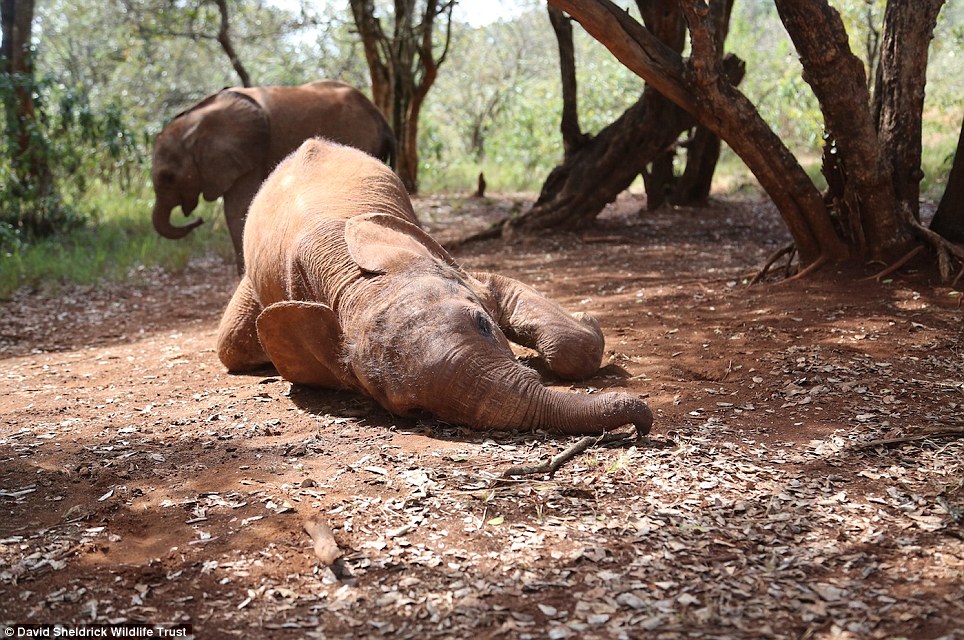 And relax! Baby Kaur flops out on the ground as she prepares to take a break. The youngest orphans often take naps throughout the day 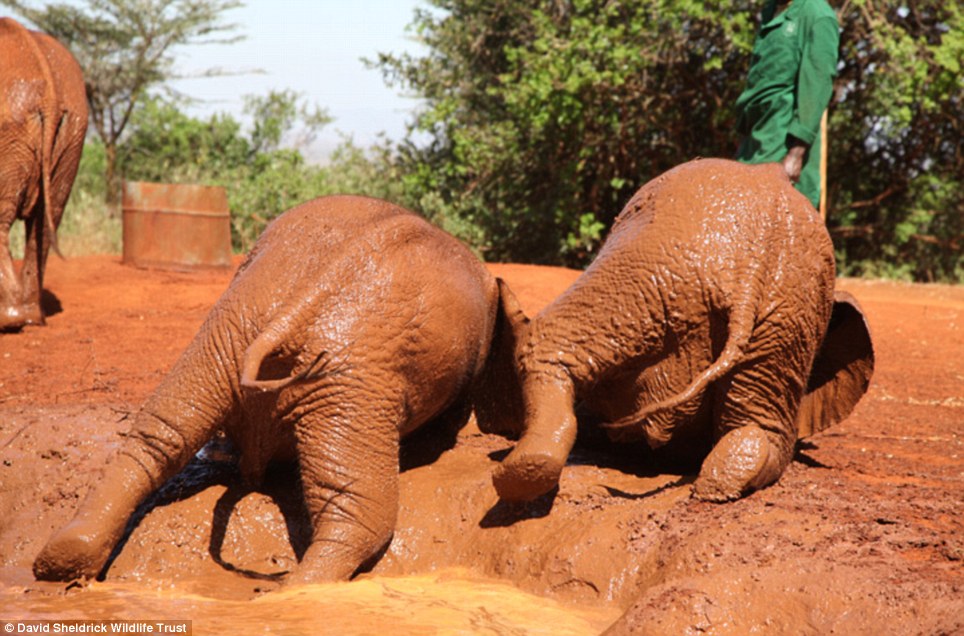 Sleepy: A pair of adorable baby elephants conk out in their mud pool during a day of play at the David Sheldrick Wildlife Trust’s Nairobi nursery 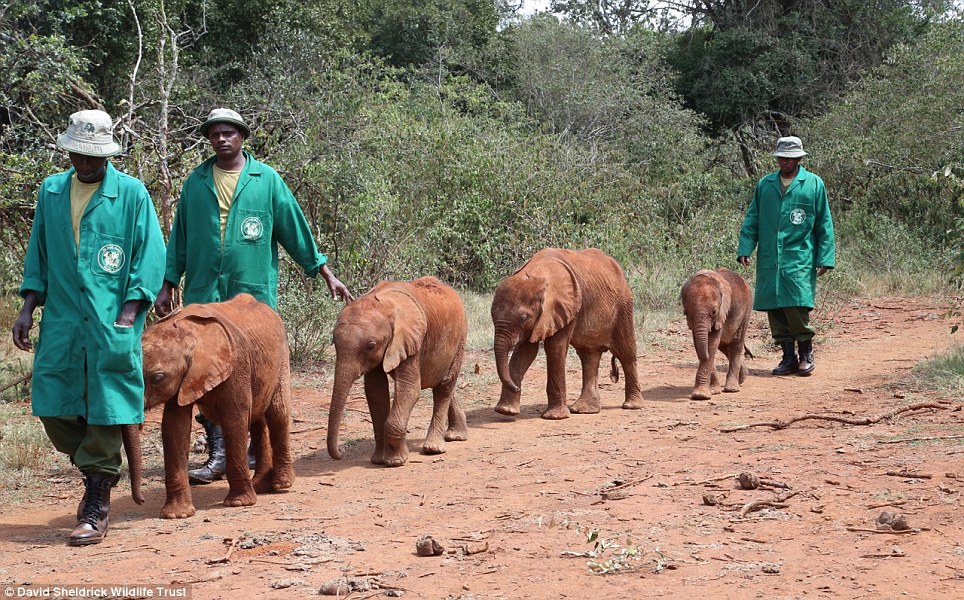 Family day out: Ashaka, Kamok, Kauro, and Mbegu are taken out into the bush in Nairobi National Park for a day of play with their human surrogate parents 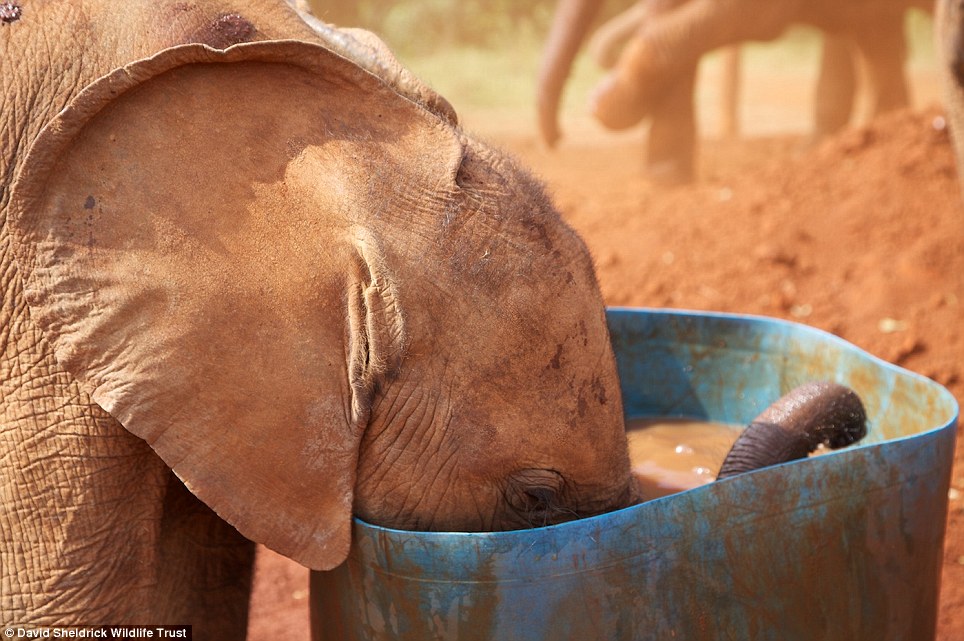 Thirsty work: Baby Ashaka is given a lesson in how her trunk works. Adult elephants would usually do this but for orphans like Ashaka, humans have to step in

Released to mark World Elephant Day, the snaps reveal that each pint-sized pachyderm has his or her own personality, quirks, and traits and can be playful, shy, or boisterous.

Among the shyer babies is seven-week-old Mbegu, who was rescued after being attacked with stones and spears by villagers, furious after a local woman was k.i.ll.ed by an adult elephant.

During the fracas that ensued, Mbegu was separated from her herd and was only saved after a group of rangers from the Naibunga Conservancy placed themselves between the enraged crowd and the calf. 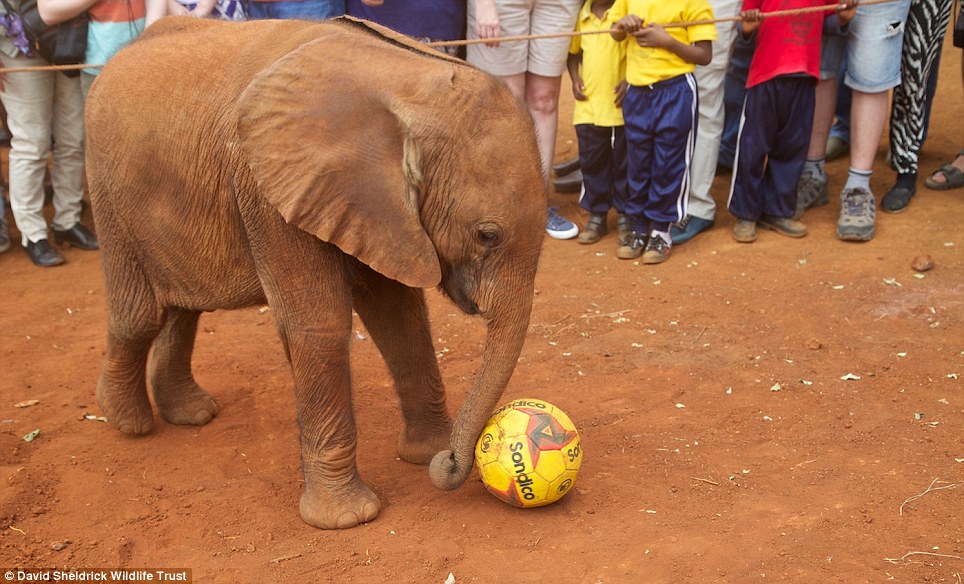 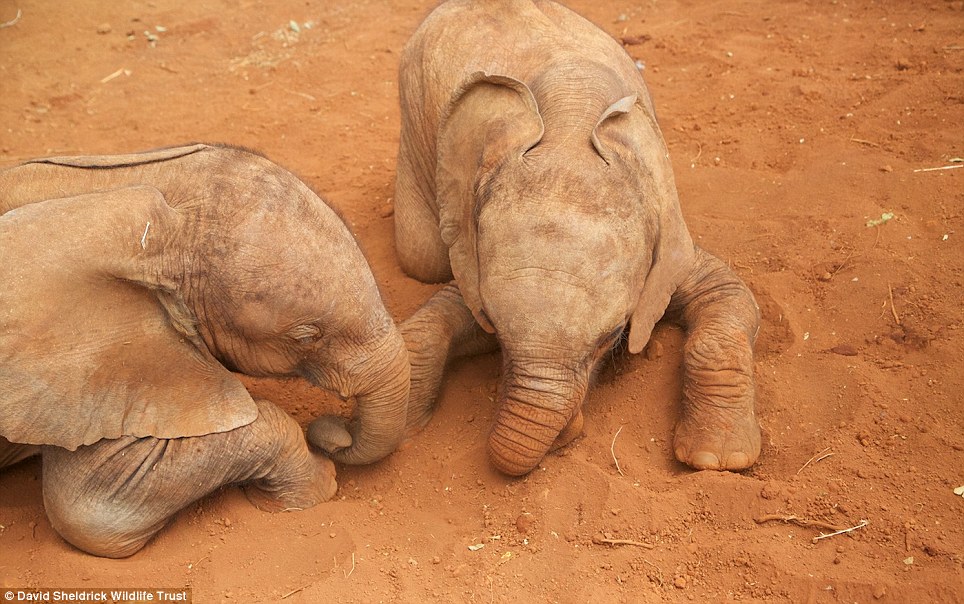 Close: Ashaka and Kamok cuddle up in the sand under the watchful eye of their surrogate parents at the David Sheldrick Wildlife Trust nursery in Nairobi National Park 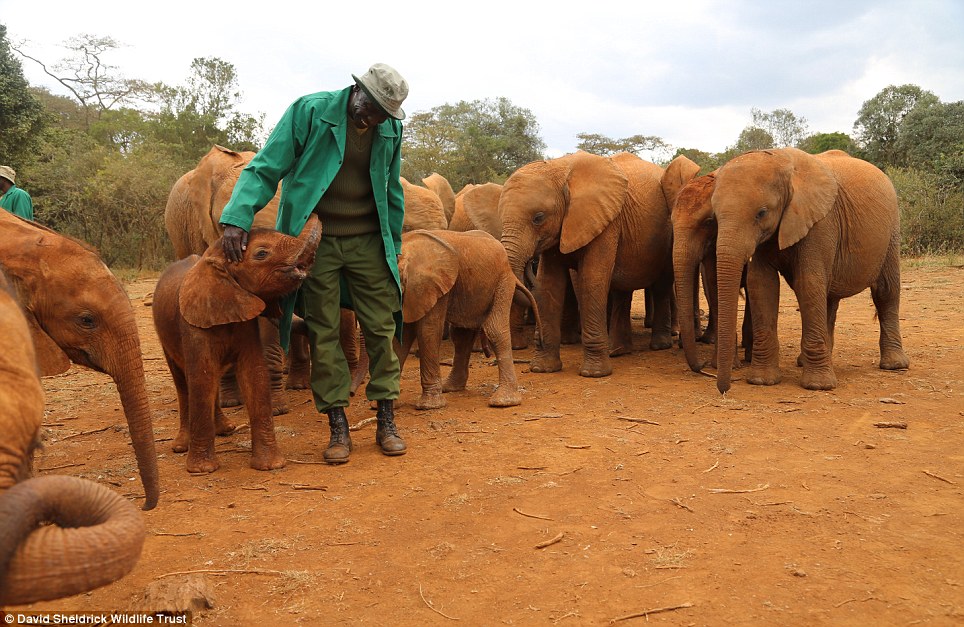 A cuddle with my dad! One of the youngest elephants at the orphanage snuggles up to his keeper. The smallest orphans often seek comfort this way 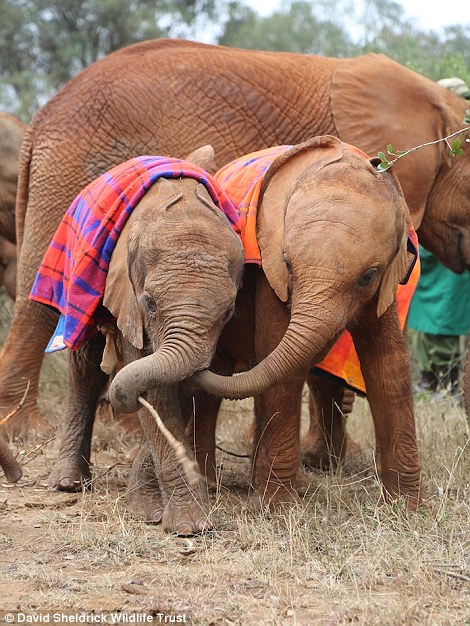 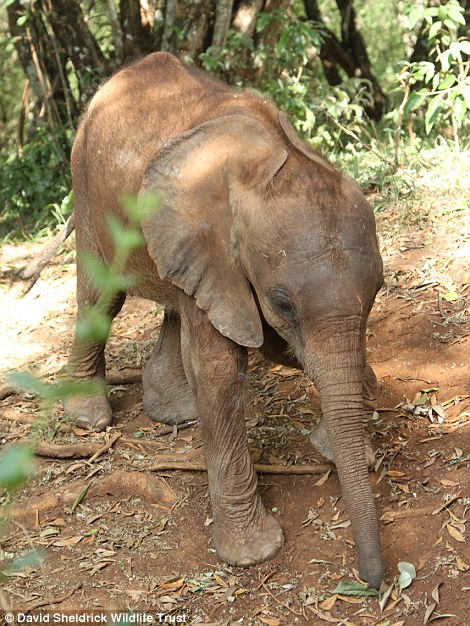 Sharing is caring! Baby Ashaka (left) fends off an attempt to pinch her stick while little Kamok (right) is a bit wobbly as she attempts to navigate a downhill slope 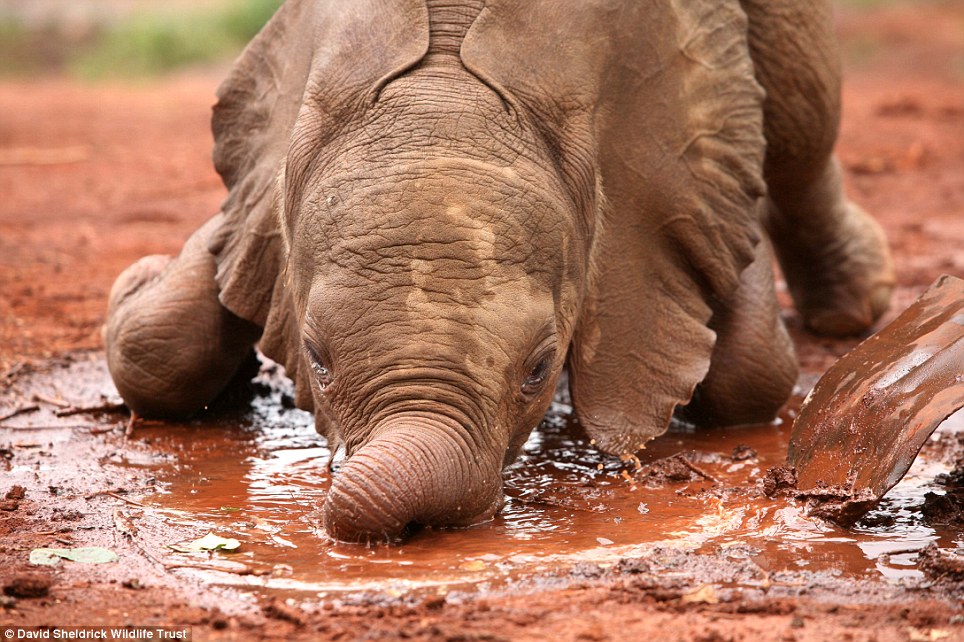 Messy boy! Baby elephant Kudup hasn’t quite got the hang of using his trunk to drink and ends up with his face in the mud 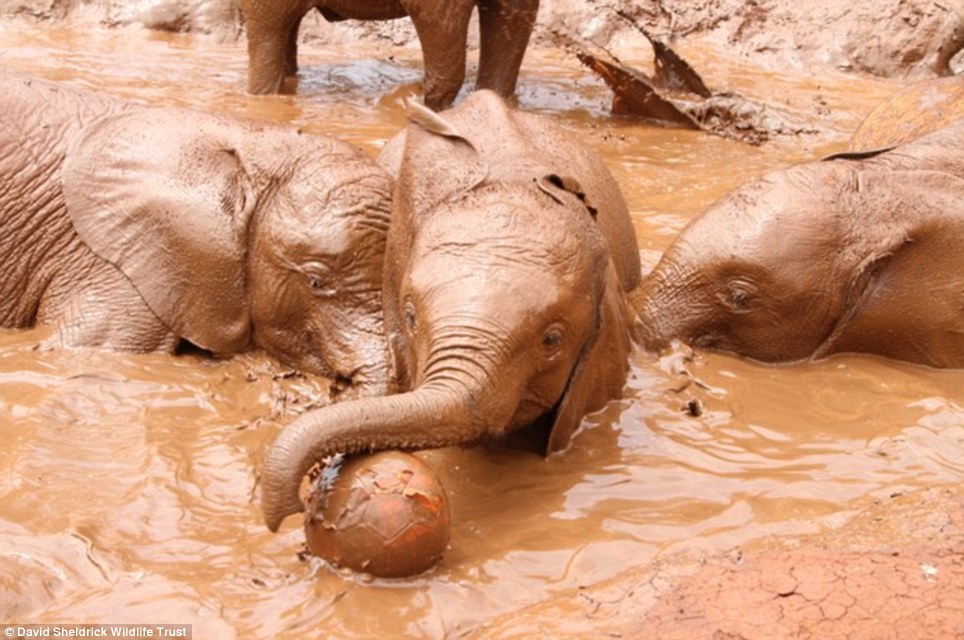 Bend it like Beckham! Baby elephants Lemoyian, Aruba, and Barsilinga indulge in a very muddy game of football in Nairobi National Park 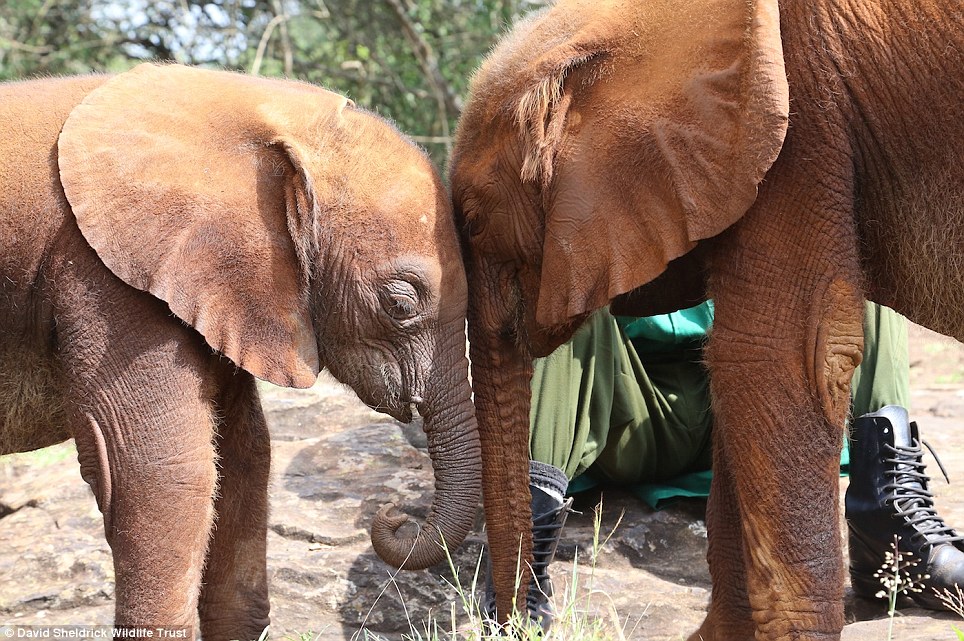 Orphan: Baby Mbegu (left) stands with her friend Kauro. She was rescued from a horde of angry villagers by a group of rangers who protected her

Taken to the charity’s elephant orphanage in Nairobi National Park, the little calf has now recovered from her ordeal and will grow up in the care of human keepers until she is old enough to return to the wild.

‘Each orphan has their own tragic rescue story but their struggle of survival and zest for life is infectious,’ says Rob Brandford, director of the David Sheldrick Wildlife Trust. ‘Mbegu was rescued at a very young age so she has really taken to her carers and loves to suck their fingers for comfort.’

With Mbegu in Nairobi National Park is Barsilinga, who had a tragic start to life after his mother was shot by poachers. Terribly injured, the female elephant had to be put to sleep, while her calf was taken to the orphanage.

‘Sadly, Africa’s elephants are under threat from poachers for their ivory,’ adds Brandford. Nevertheless, when he is old enough, Barsilinga and his best friend Kithaka will be re-homed in Tsavo National Park.

For now, though, his days, much like those of a human child, are a whirlwind of play, cuddles, and bottle feed. ‘Each of the elephants rescued and in the care of the David Sheldrick Wildlife Trust has been orphaned,’ says Brandford.

‘But they now have a new herd in the form of our unusual human-elephant family.’ 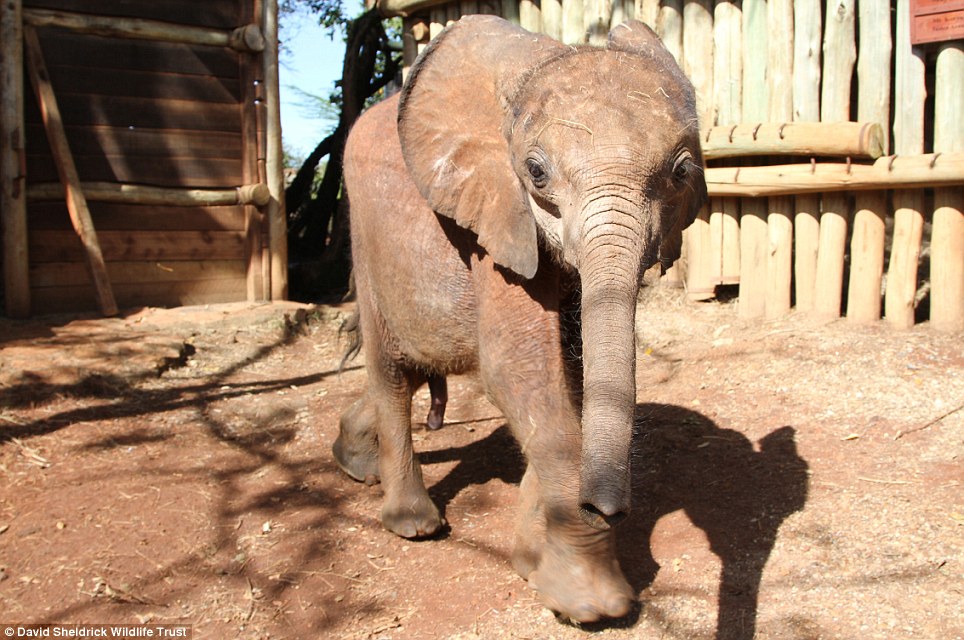 Tiny: Little Tundani is one of the smallest elephants at the David Sheldrick Wildlife Trust’s Nairobi National Park orphanage 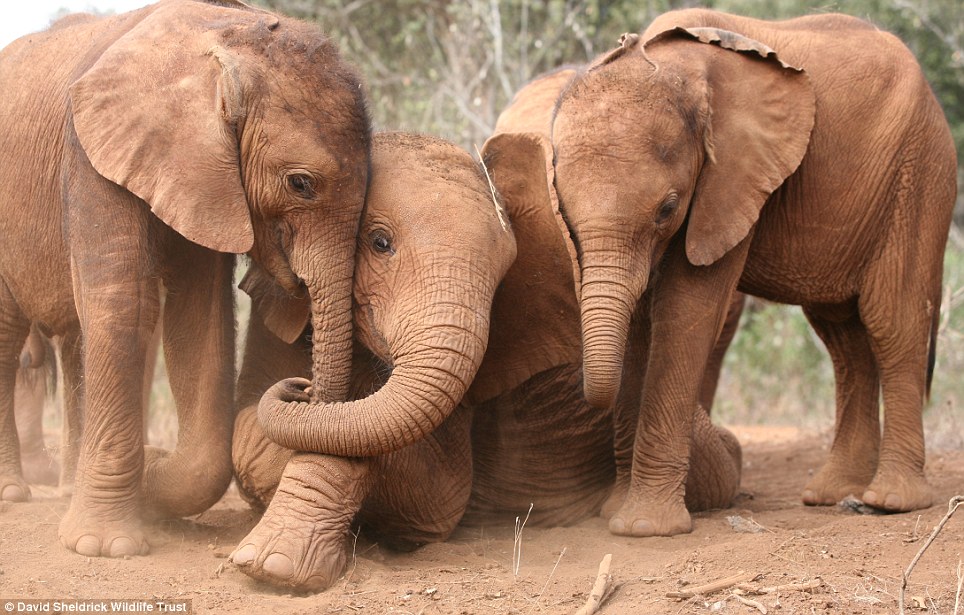 Best friends: Suguta, Kibo and Nhan like to spend their days playing together and will eventually live as a herd in Tsavo National Park when they grow up 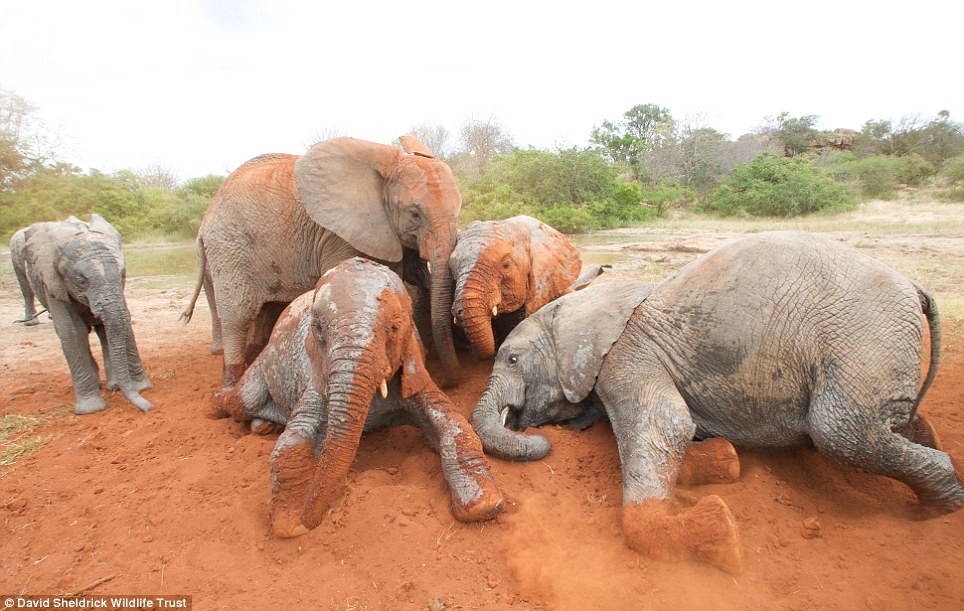 Playtime: Older orphans at the David Sheldrick Wildlife Trust’s Ithumba orphanage get a lesson on how to live life in the wild 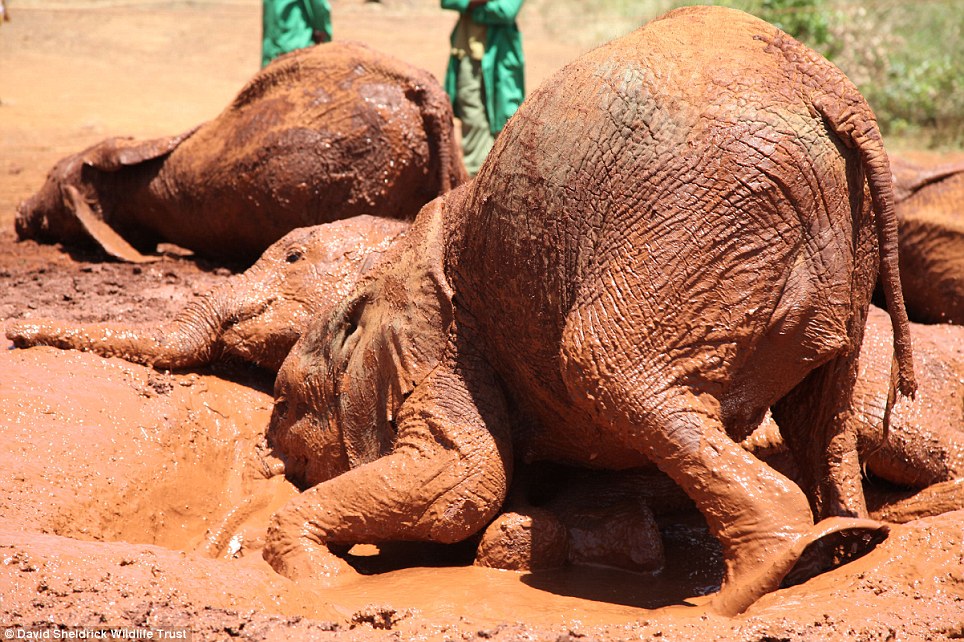 Time to get up! Playful Cities attempts to lever her somnolent friend Kainuk out of a muddy pool for a game but without success 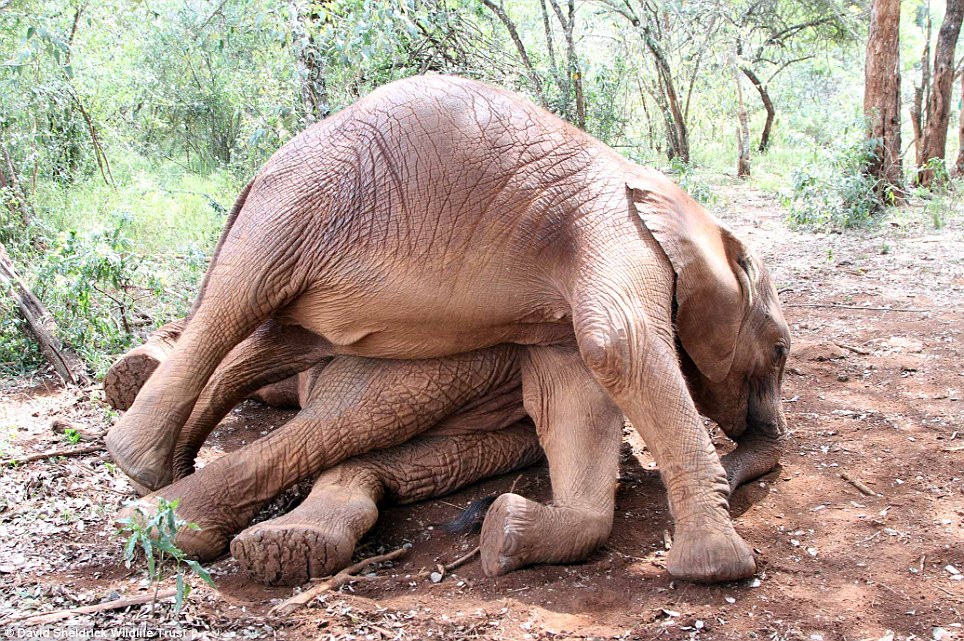 Pile up! Adorable baby elephants Naipoki and Mutara indulge in a spot of heavyweight wrestling during playtime in the David Sheldrick Wildlife Trust’s Nairobi nursery 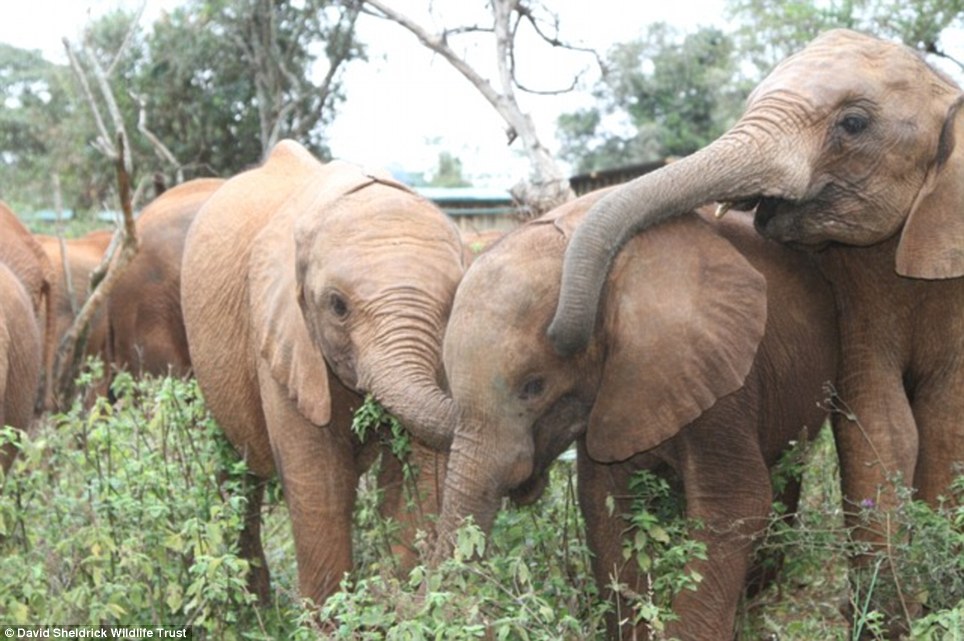 Cuddle: Naipoki, Vuria, and Kihara indulge in some mutual back-scratching as they relax in the beautiful Nairobi National Park in Kenya 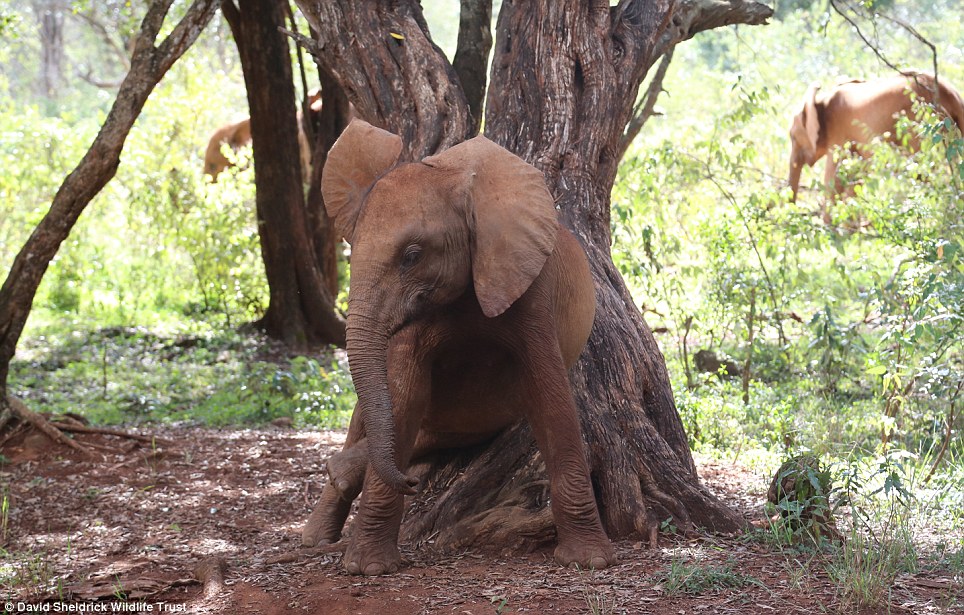 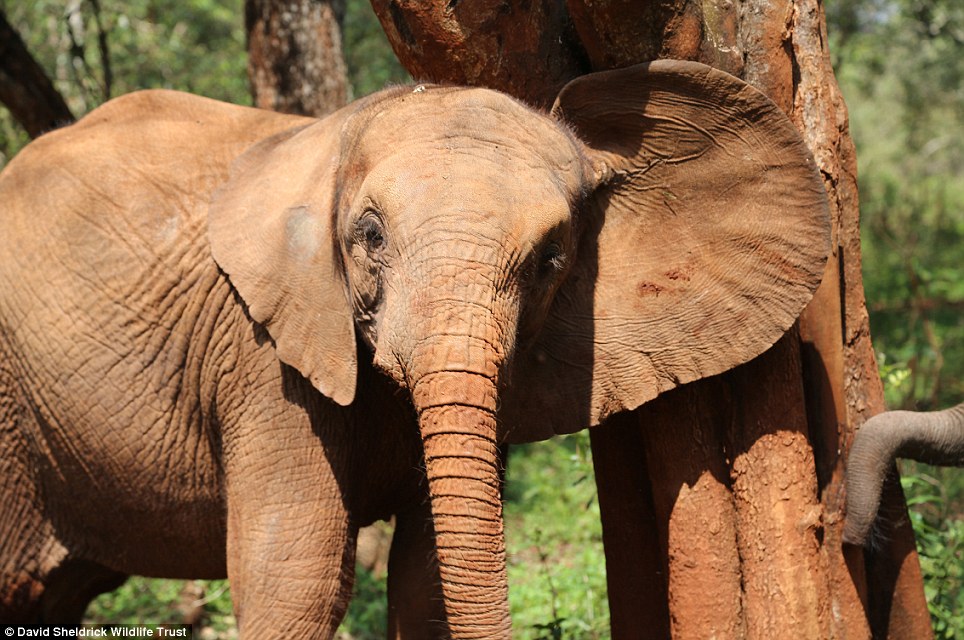