When we think of windmills, we ultimately think of the Netherlands. Other countries are also home to windmills, but the Netherlands seems to have become famous for its use of windmills: to not only harness the power of the wind but to also change the landscape and grind grain. The sheer volume that exists in this small country is astounding.

We probably all know what a windmill is, but to clarify, they are large mills with sails that catch the wind. The energy created by the turning of the sails is used to drain land, extract groundwater or grind grain. Today, modern windmills, called wind turbines – those large metal mills with three sails – are used to generate electricity.

When were they discovered?

The Persians are said to be the inventors of the first windmill in 500 to 900 AD, and many believe that the mill design spread back to Europe via the crusades. However, it is also possible that the windmill was invented at a later stage in Europe, as the Persian and European designs differed greatly.

Windmills are said to have appeared in the Netherlands as early as 1200 AD. These windmills would have been used to grind grains.

What kinds were there?

The earliest windmills in Europe were called post-mills, due to their structure. This type of windmill sat on a post; often in a tripod structure, and you could turn the whole structure to face the wind by using a long beam attached to the body of the mill. The body of this windmill contained all of the milling machinery.

In order to drain wetlands in the Netherlands, the post-mill design was changed to accommodate a hollow post, which sat under the body and contained the drive shaft.

Windmills continued to grow larger and around 1526, the hollow post-mill was replaced with an octagonal smock mill, which gets its name from the dress-like costume it resembles. On smock mills, only the top part, the cap, revolves to take advantage of the wind.

Smock mills allowed for permanent structures to be built, which would house the mill. These were later developed into tower mills, which have a much rounder structure, as those building the mills were not restricted to using timber with straight sides. 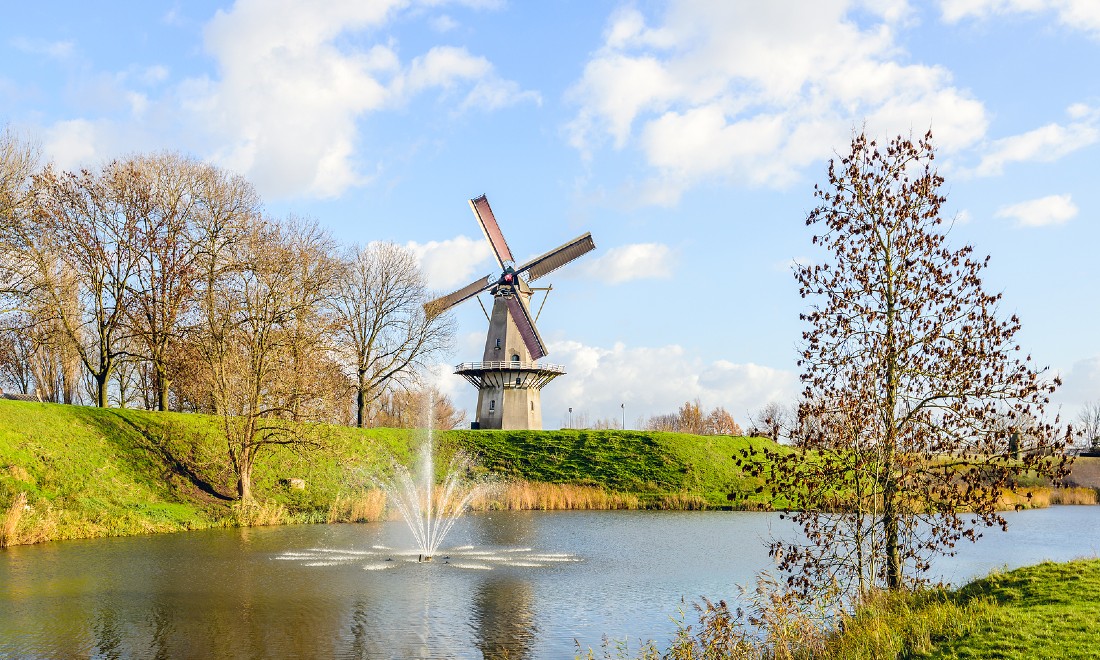 What were they used for?

The windmill allowed land, which would previously have flooded often or have been under water altogether, to be reclaimed and inhabited. We owe the landscape we have today in the Netherlands to them.

In the 16th century, windmills were also used for the production of anything that needed shredding, mixing or pounding to make it into a viable product. The paper on which the American Declaration of Independence was printed was produced at the Zaanstreek paper mills.

There were mills for everything; from mustard and cocoa to oil and wood. The sawmills played a pretty important role in the shipbuilding industry, allowing the Netherlands to become a great sea-faring power in the 17th century Dutch Golden Age.

How many were there?

In the 19th century, there were around 9.000 windmills, with 900 in the Zaan district alone. Nowadays, fewer and fewer windmills are being used, but around 1.200 still exist; a large number are situated in the province of South Holland.

Kinderdijk has the most windmills situated in one place in the world and is also listed on the UNESCO world heritage list. These windmills are used to drain the polder and are a typical example of the Netherlands’ innovative water management systems.

Windmills were also used to convey important messages to the public, such as a death or a wedding. The sails were used to warn of Nazi attacks during World War II.

Of all the areas with windmills in the Netherlands, the Zaan district was considered the first industrial area in the world with windmills running virtually day and night to process goods.

6 Reasons Why You Should Take A Day Trip To Haarlem