A higher standard of living: Swiss cities, houses, and food are all top quality. Crime is very low, so you’d feel pretty safe roaming around in the middle of the night all alone. There’re no beggars on street, and everybody around you looks very well off, it’s surreal. You can drink from any public water fountain in the city, and all public places are kept really clean. There’re many reasons why Zurich consistently fares as one of the top 3 cities in the world to live in. Mercer Quality of Living Survey. Higher pay and lower taxes: Swiss wages are pretty high. If you’re a waiter, you get paid a minimum of 20 CHF per hour. If you’re an engineer or a banker, your salary is better off than your US colleagues. On top of that, the taxes are relatively lower. Swiss Tax Calculator.

Amazing public transportation/travel opportunities: You’re right in the middle of Europe. From Zurich, Germany is an hour away, France and Italy are 2. Everything else is a few hours by flight. The trains are all on time, and the transportation both intra-city and inter-city is very good. You can pinpoint any remote location and reach there solely by public transportation. Switzerland is also part of the Schengen treaty, even though it’s not part of the European Union. That means, citizens of visa-deprived countries (like India / China) can roam around freely in the EU if they’re living/working in Switzerland.

Better work-life balance, and emphasis on sports: People work to live there. 8-5 culture is the norm, and people don’t work in the evenings or weekends. This applies not only to office-going folks but also to general stores/shopping malls, etc. Minus the bars, the entire city of Zurich closes at 7 pm on weekdays and opens only until 4 pm on Saturday (Thanks for correction: Thierry Blancpain). Nothing is open on Sundays. Everybody I knew was doing at least 2 sports on a regular basis, which also explains why Swiss are so fit. Almost free education even during undergrad studies: As opposed to the US, where an undergrad can cost you a mortgage and your parents have to save their entire lives for, the best of Swiss universities charge only ~500 CHF per semester, regardless of nationality. This includes world-renowned universities like ETH Zurich, and EPFL Lausanne, and is true even for master studies. ETH – Rektorat – Semestergebühren/-beiträge.

Clean smog-free air / beautiful mountains and landscape: Swissreally cares about the environment. Air conditioners are frowned upon, if not entirely forbidden. Even when summer brought 32 degrees Celsius (~90F), we had to make do with fans both at home and at the office. Ah, the horror! But well, it’s good for the environment, and summer doesn’t last that long. Another good example is the Gotthard Rail tunnel that the Swiss are building to cut down on the number of trucks between. 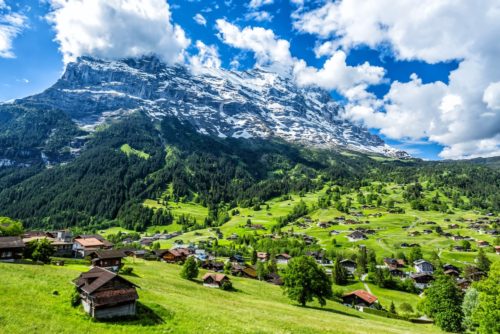 Food / Chocolate / Beer / Wine: The best Swiss chocolate isn’t sold at airports worldwide (I’m looking at you Lindt). In Switzerland, you get to eat Sprüngli, which IIRC, has its main branch in Paradeplatz in Zürich, right in front of Credit Suisse and UBS headquarters, and isn’t available outside the country. In Switzerland, you can find a good selection of Italian, French and German food as well. And you wouldn’t be complaining about beer and wine. Swiss chocolate.