Our visit to Quebec was hosted by Tourisme Quebec, Tourisme Charlevoix, and Quebec City Tourism. All opinions are our own and are based on our experiences.

A North American treasure, Quebec offers culture, history, and cuisine that’ll make you feel like you’re in Europe. Where else in North America can you experience terrain resembling the French countryside, walk along charming European-style shopping streets, and sit down to a traditional British afternoon tea? 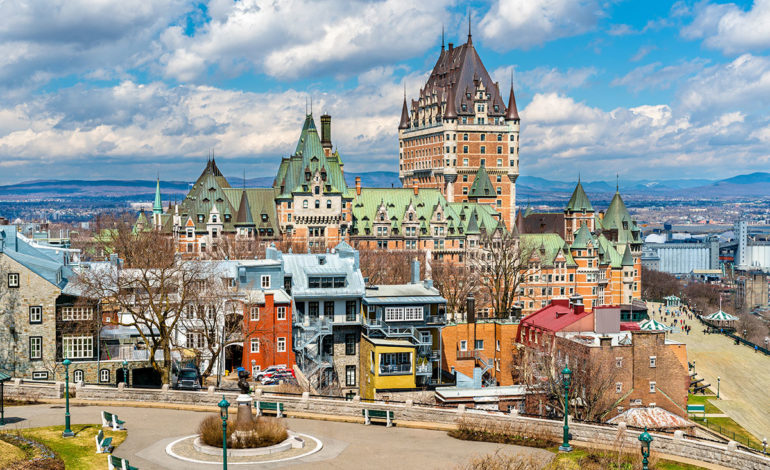 Here are some of the best ways to experience Europe in Quebec.

1. Tour A Chateau Or Manoir

The Fairmont Le Chateau Frontenac is a Quebec City icon and the most photographed hotel in the world. On a promontory with lovely views of the Saint Lawrence River, the chateau oozes old-world European charm blended with modern North American amenities. The hotel rests on the Saint-Louis Forts and Chateaux National Historic Site, which was the official residence and seat of French and British governors for more than two centuries.

Another picturesque property, the Fairmont Le Manoir Richelieu is located near the lovely village of La Malbaie in the scenic Charlevoix region. Tucked away amidst mountains and forests, Le Manoir also has gorgeous views of the Saint Lawrence River. Enjoy the view over the bluff, play golf on the expansive course, or have a cocktail or afternoon repast in this historic French-style castle, and you’ll feel like you’re on a luxurious European vacation.

Wherever you go in Quebec, you will find charming shopping streets resembling the ones in Europe. In Quebec City, wander down Rue du Tresor, a outdoor gallery reminiscent of the Place du Tertre in the Montmartre quarter of Paris. Rue Saint-Jean is lined with delightful boutiques, specialty food shops, apparel stores, and souvenir vendors. Quartier Petit Champlain is North America’s oldest shopping district, dating back to the 17th century. Its cobblestone walking streets are lined with artisanal shops, art galleries, restaurants, and historic homes.

Montreal’s famous Sainte-Catherine Street offers shopping, people-watching, dining, and entertainment. While English shops and department stores can be found on the west end of the street, well-known French brands set up shop on the east end. The entire area is full of delightful boutiques, international and Canadian stores, shopping malls, restaurants, bars, theaters, cinemas, and more, with the ambience of a modern European shopping zone.

3. Immerse Yourself In Quebec’s Old City

The fortified city of Old Quebec is a UNESCO World Heritage site well worth exploring. Walk around and survey the walls and gates that encircle the Old City. They were built some 400 years ago by the French for protection. The Place-Royale is the first place in North America the French settled. It’s the location where Samuel de Champlain resided when he first arrived and is also home to Notre-Dame-des-Victoires, the oldest stone church in North America.

The Old Port is another wonderful place to get a feel for the connection between Quebec and Europe. Plenty of small shops, sidewalk cafes, and art galleries fill the port area with activity. Rue Saint-Paul, originally home to warehouses and wholesalers, is now a busy shopping street and antiques district with antiques dealers, art galleries, and art deco accessories shops galore.

The charming region of Charlevoix offers another European-style experience in the province. Charlevoix sits between the Saint Lawrence River and the Laurentian Mountains, with beautiful views in every direction. Rolling hills, small farms, and villages dot the land. The Saint Lawrence River offers opportunities for sailing and even whale watching.

Baie-Saint-Paul is a great place to start. This delightful town has a main street loaded with galleries, boutiques, restaurants, and shops with handcrafted local products. You’ll likely stay at a gite or an auberge, very much like a French country inn. Take a drive through the beautiful countryside to La Malbaie, a vacation resort town favored by the English and Scottish upper crust. This small and beautiful once hosted the G7 summit, though most visitors come for the gorgeous scenery and year-round activities.

While Quebec’s European character reminds us of France, we also discovered a significant bit of Britain here, too. One fantastic place to visit is the beloved Montmorency Falls Park, where General James Wolfe’s British troops camped before embarking on the famous Battle of the Plains of Abraham. The stunning waterfall is nearly 250 feet high, and the park is a lovely place to explore the natural beauty of Quebec. History buffs will enjoy visiting Manoir Montmorency, once called Kent House after Queen Victoria’s father, the Duke of Kent. Enjoy a lavish Sunday brunch or grab a pub meal and pint at Pub Kent House.

A taste of the French countryside awaits at the Ile d’Orleans, where a few hundred French families made their home in the 1700s. You’ll feel like you’ve stepped back in time to rural France when you see the charming heritage homes that dot the land. We were delighted by the many artisan outlets and farm stands around the island, and we tried many delicious local products.

You can take a bus tour or drive around the Ile d’Orleans to get a feel for this birthplace of French North America. Over 600 historic buildings have been restored to preserve the history of the French founding families of the area.

Foodies will love the gastronomic bounty of the island. Stop at a cider house, pick up some fresh cheese, and enjoy seasonal fruit, tasty wine, and delicious chocolate from friendly producers across the island. Even better, pick up some goodies and have a countryside picnic while looking out at the Saint Lawrence River.

7. Stop By The Cathedral Of The Holy Trinity

It’s fascinating to see both French and British history come to life in Quebec’s many churches. One of the most important British churches is the Cathedral of the Holy Trinity, the first Anglican cathedral to be built outside the British Isles. Constructed in the early 1800s, it was designed by British artillery officers who modeled it after the famous church of Saint Martin-in-the-Fields in London.

Inside, we enjoyed The King’s Gift exhibit featuring a gorgeous silver Communion service given to the cathedral by King George III. The cathedral is also home to a rare English chamber organ built in 1790. And the stunning stained glass windows, many of them created in London, cast a lovely light on the many monuments to British officers, nobles, and blue bloods.

From bistros to boulangeries, French cuisine infuses Quebec with European flavor. No matter where you are in Quebec, you’ll find delicious dining and exceptional ambience. Whether you fancy traditional French haute cuisine, modern French fare, or French-inspired Canadian food, you’ll find it in Quebec.

Restaurant Bonaparte is located in Old Montreal near Pointe-a-Calliere. You can enjoy traditional French culinary favorites or indulge in a glorious degustation menu, a six-course tasting menu with a little bit of everything.

Les Labours in Baie-Saint-Paul takes the farm-fresh country French tradition and puts it in the center of the action. The kitchen is open on all sides, and diners can sit at tables or at the four-sided counter that surrounds the chef and his team. We talked with the chef about his cooking philosophy and favorite ingredients as he prepared seasonal dishes inches away. The menu changes with the seasons, and the kitchen team uses fruits, vegetables, and herbs grown in the restaurant garden as well as those from responsible local producers.

For a unique experience of culinary excellence, head to Chez Boulay Boreal. The French chefs’ years of culinary training and their passion for ingredients procured from the boreal forests of the northern territories result in a stunning display of inventive cuisine. We enjoyed a whimsical meal featuring new tastes like the delicious cloudberry.

On a trip to Britain, you would want to enjoy the sumptuous experience of an afternoon tea. Montreal takes on a British accent with its wonderful teatime options. The Cardinal Tea Room resembles a refined English study of the 1920s. Period furniture and antique china enhance the authentic menu, which includes classic scones with clotted cream, cucumber sandwiches, deviled eggs, and teas for every taste.

The Queen Elizabeth Hotel Fairmont’s Roselys is another great spot for a proper British afternoon tea. The menu offers some updated classic teatime treats and as well as a “royal tea” that includes a flute of champagne.

The tea experience at the Palm Court of the Ritz-Carlton is an elegant celebration of the British tradition, with delightful finger sandwiches and pastries made by one of Canada’s most celebrated pastry chefs.

For a magical journey that feels delightfully European, visit Quebec. You’ll enjoy the feeling of being transported to Europe without ever leaving North America.

BY SUE REDDEL AND DIANA LASKARIS

9 Cool Things to do in Vancouver, Canada

1 thought on “9 Ways To Experience Europe In Quebec, Canada”