You simply cannot know how much you need to visit Vienna until you actually visit Vienna. While the capital of Austria often takes a back seat to capitals like London, Paris, and Rome, Vienna can certainly hold its own, and then some. Baroque architecture and imperial palaces bring the city’s artistic and musical past to life, and their grandeur and opulence wrap the streetscapes in old-world magic. The coffeehouse culture and fantastic cuisine add a modern touch. Add to that the convergence of classic art with avant-garde masterpieces, and it’s easy to see that this Eastern European capital on the Danube River is a city for all times. It’s also a city for all seasons: The best part about Vienna is that it thrives year-round. From the outdoor summer festivals to the sparkling Christmas markets, there is no wrong time to visit Vienna.

Most visitors to Vienna will hit the major sites, many of which center on the powerful Habsburg dynasty whose members called the city home for more than 600 years. The palace complex houses the famous Hofburg Chapel, where the Vienna Boys Choir still sings; the Spanish Riding School; and the Kaiserappartements, the imperial apartments where the royal family once lived. There’s also the Schönbrunn Palace, the Belvedere Palace, and more, all of which served as residences for emperors. While these sites are absolutely worth a visit, there is another side of Vienna that is a bit more offbeat — a side where hidden gems are waiting to be discovered.

Here are some facets of the less-visited side of Vienna that you won’t want to miss. 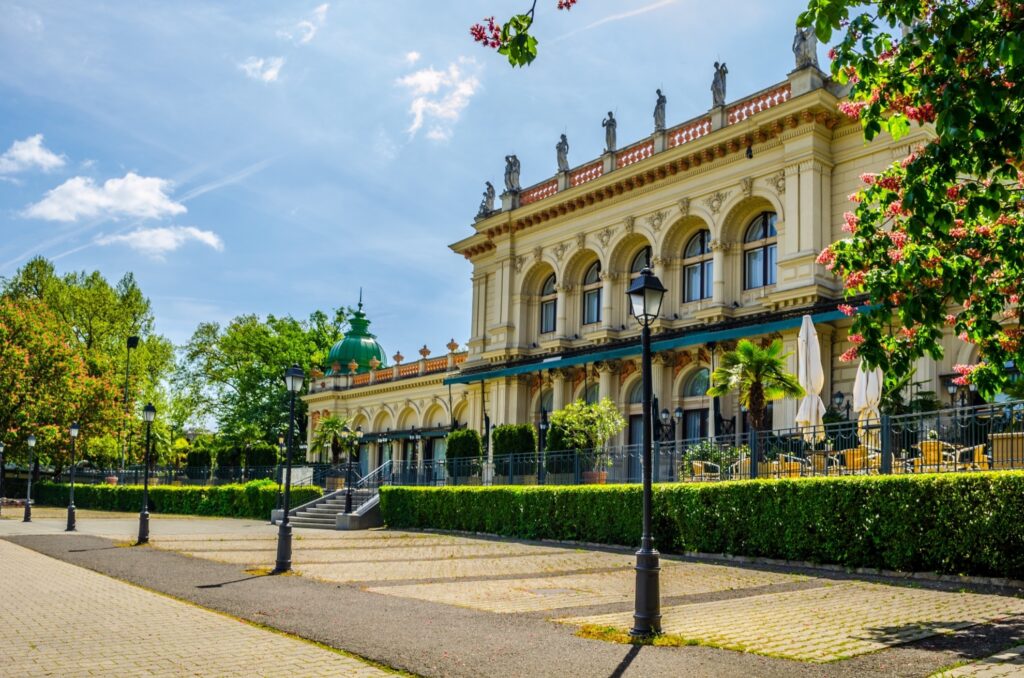 You simply can’t travel to Vienna without experiencing the monumental classical compositions that came out of the city. But while everyone else is listening to the Vienna Philharmonic, visitors in the know can experience the sounds of Mozart and Strauss — minus the crowds — at the Kursalon Vienna in City Park. According to Gianetta Palmer, a Europe writer for CarInsuranceComparison.com, you can enjoy live music by a string ensemble while dancers take to the floor in the traditional Viennese waltz. Even the 19th-century Italian Renaissance-style building is a feast for the senses.

The concert series is a great add-on for riverboat cruisers who are headed down the Danube, especially during the Christmas season. Tickets start at 45 euros. The VIP category includes a glass of Prosecco in addition to premium seating.

You know that junk drawer that everyone has? Yes, that drawer. Now imagine a museum full of the contents. You’re envisioning Supersense, a cabinet of curiosities that takes collectors back to the analog age. Supersense, located in the Second District in a former neo-Gothic mansion, is a museum of analog antiques where you’ll find typewriters, pinball machines, old telephones, and more. There’s even a DIY section where you can record 90 seconds of vinyl in a studio made out of an elevator, or play pinball on a machine that is hooked up to a Polaroid camera that snaps a picture with every new high score. There’s a printing press that can make postcards and business cards, and there’s a collection of vintage guitars and synthesizers. The coffee shop next door is a great place to grab a slice of cake and a cup of Joe. 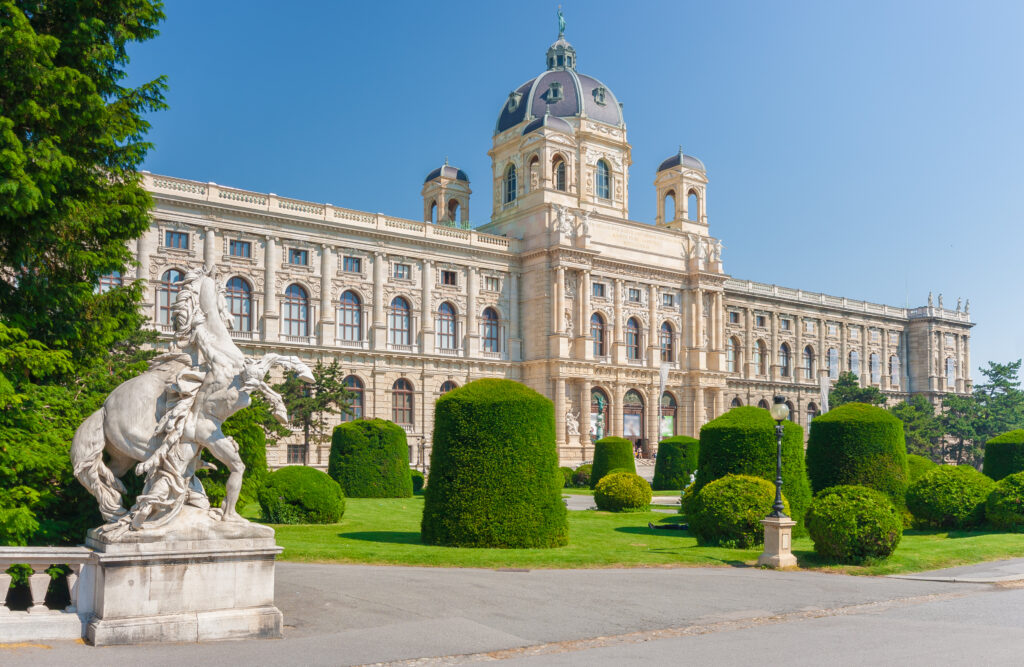 Housed in one of the oldest insane asylums in the world, Vienna’s Narrenturm Museum is certainly an odd find. The Narrenturm, or “Fools’ Tower,” is a circular, looming structure that today houses the city’s museum of pathology and anatomy. Not for the faint of heart, the museum’s collection includes oddities like syphilitic skulls, graphic wax displays of untreated diseases, taxidermied monkeys, and some other grotesque items. The Collection of Anatomical Pathology in the Narrenturm is part of the Natural History Museum of Vienna. Admission to the museum costs approximately 2 euros.

Vienna may be known for its connection to some of the world’s most famous musicians — Mozart, Schubert, Haydn, and more — but there is a musical tradition in Vienna that extends far beyond the classics. Jazz and blues thrive in Vienna as well, though the scene is not quite as aboveground as the city’s other musical landscapes. Porgy & Bess is one of the best places in the city (and, frankly, one of the best places in Europe) to steal away for a night of jazz and blues. Tucked away in the First District, this alternative club takes visitors back to the smoky, hazy heyday of jazz and blues. There is even an art space that features photography exhibits, sculptures, and paintings. 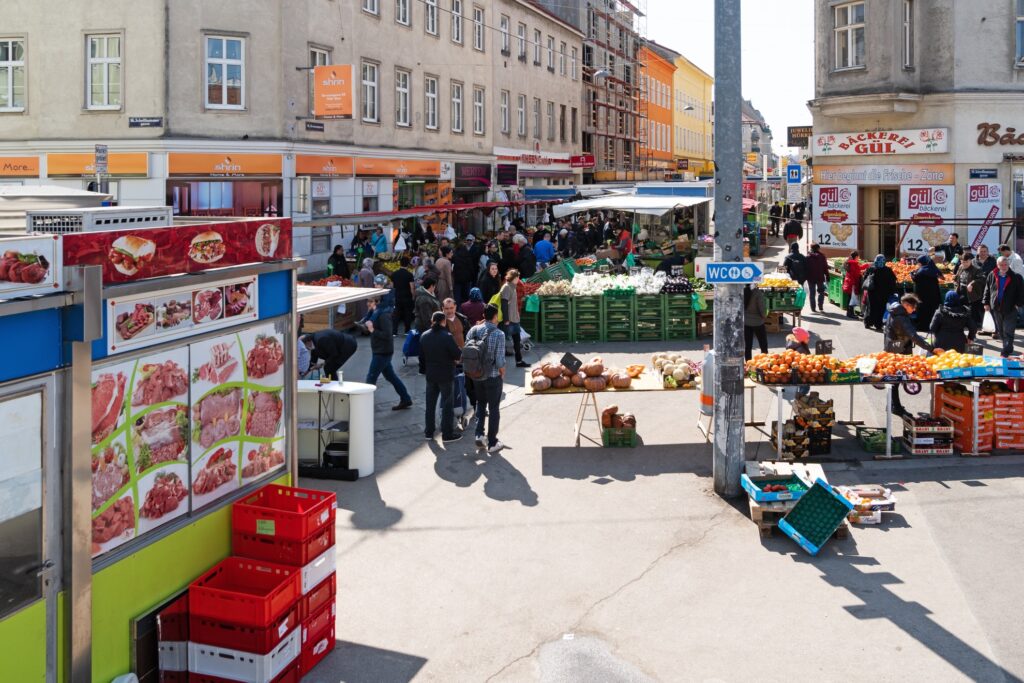 Taste the very best of Vienna (and tuck into a massive slice of local life in the process) at the city’s vibrant Brunnenmarkt. Located in Yppenplatz Square, one of the trendier neighborhoods in the city, Vienna’s largest street market features more than 170 stalls that buzz with activity, local vendors, residents, and tourists alike. You’ll find all kinds of produce, cheese, fish, and spices. The market is particularly popular for its fresh, authentic, and affordable Turkish cuisine, and many meals can be had for less than 4 euros. Artists have also set up shop around the market, turning the experience into a multisensory affair. Nearby are dozens of popular restaurants and wine bars. A quick snack can easily become an all-day eating, drinking, and shopping extravaganza.

6. Cemetery For The Nameless 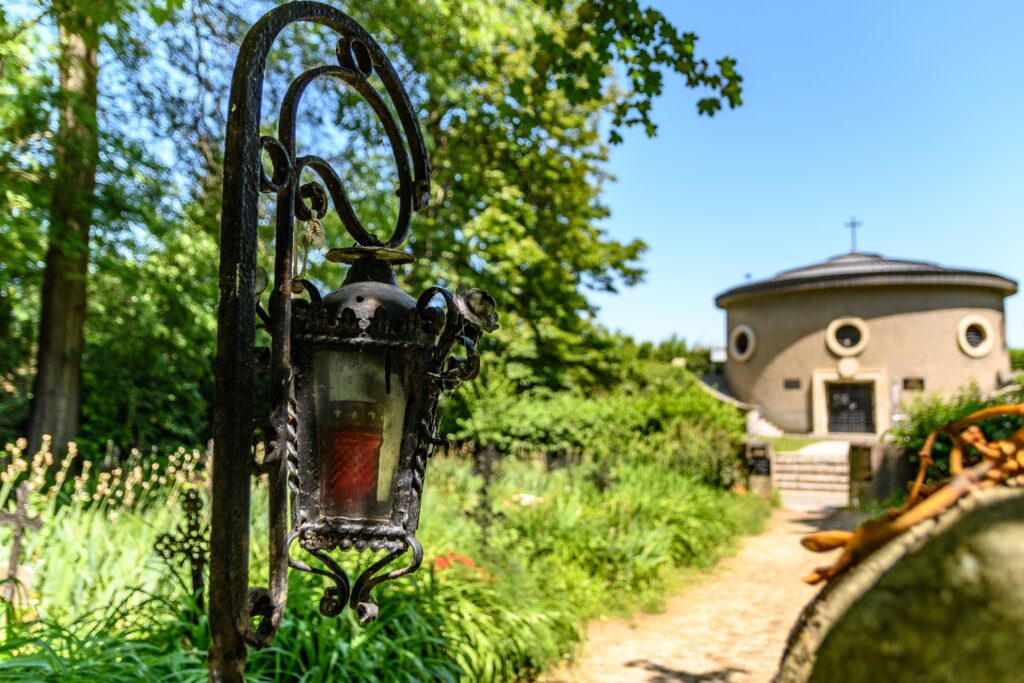 Originally opened in the late 19th century, the Cemetery for the Nameless is the final r.e.s.t.i.n.g place for people whose circumstances did not allow for a proper funeral, including s.u.i.c.i.d.e v.i.c.t.i.m.s and unknown people recovered from the Danube River between 1840 and 1940. The mood is somber, but with threads of hope, as the purpose of the cemetery was to provide a place for the forgotten to r.e.s.t in peace. Most graves are marked by black crosses with silver crucifixes. Every year on All Saints’ Day, local fishermen honor the unknown d.e.a.d with a small ceremony on the Danube.

Foodies will fawn over the traditional Austrian dishes served up at Gasthaus Quell. The restaurant is an authentic beisl, or small tavern, to tuck into the tastes of Vienna. With its wood-paneled interior, chandeliers, and old-world hearth, you’ll feel as if you’ve stepped back in time. The menu items are what you’d expect from a traditional Austrian kitchen, from schnitzel and goulash to sausages and more. The staff is known for being incredibly warm and welcoming. 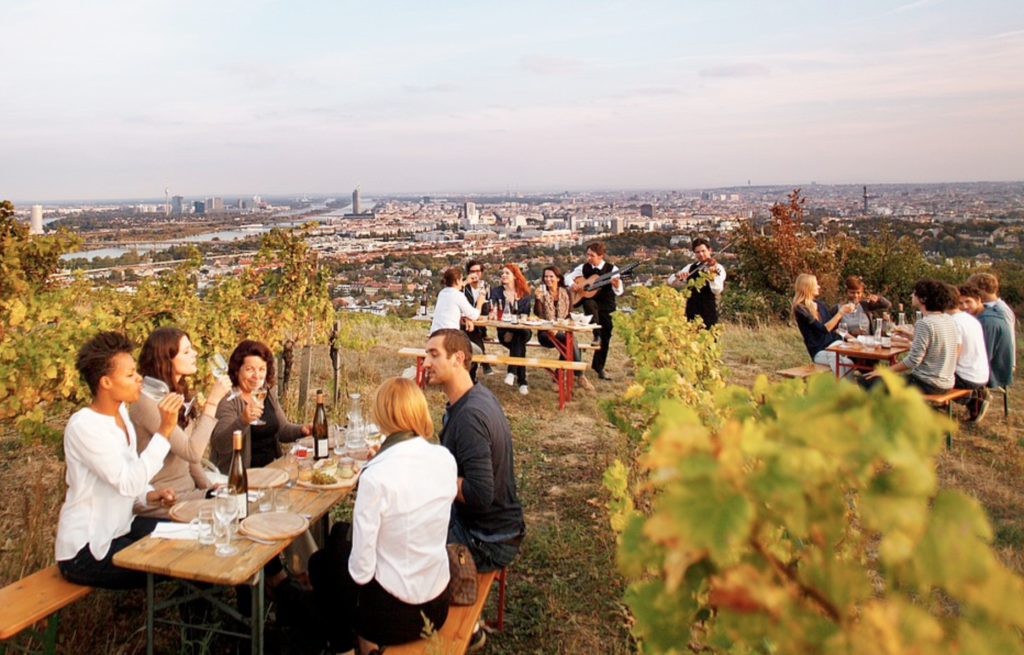 Did you know that Austria has a rich wine heritage? It’s true. Austrian wine — particularly its white varietals like riesling and grüner veltliner — is some of the best in Europe. Vienna’s winemaking tradition dates back centuries, and wine taverns are still popular throughout the city. Today, there are about 1,730 acres of vineyards in the Vienna area. Head to the hills surrounding the city to discover taverns and cellars that offer wine tastings.

Vienna has its own wine trail as well, which leads from Neustift am Walde to Nussdorf. Along the way, you’ll pass through Sievering, Cobenzl, and Grinzing, all notable locations in the Viennese wine and heuriger tavern traditions. Enjoy the delicious local wine while drinking in the equally delicious views of the surrounding countryside. 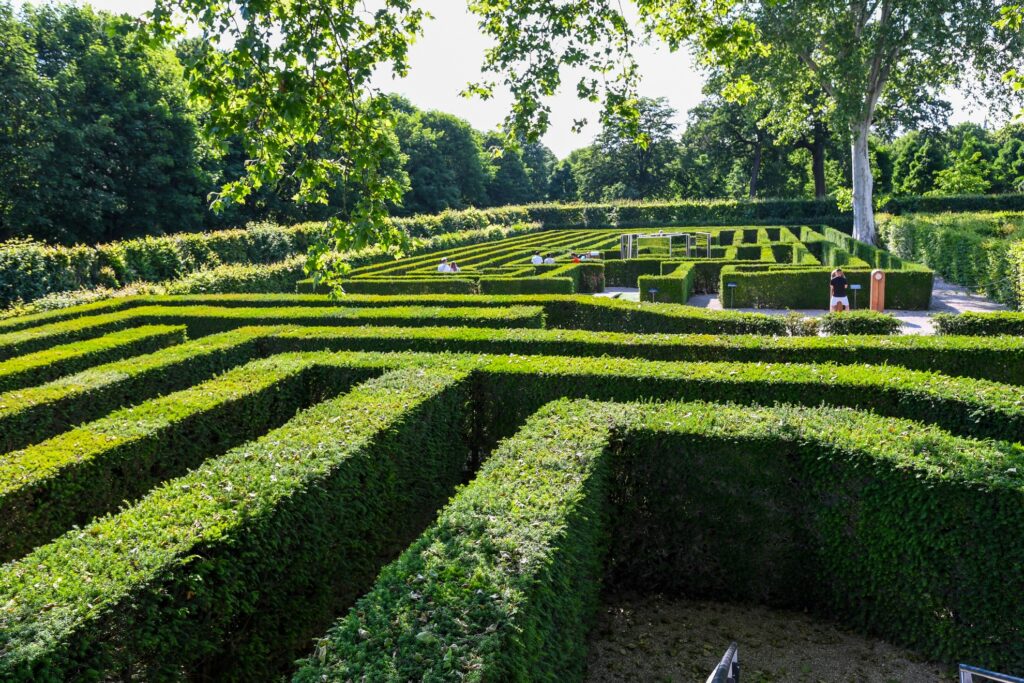 No doubt one of Vienna’s most iconic attractions is Schönbrunn Palace, the insanely ornate and over-the-top hunting lodge and summer palace of the Habsburgs. But while most visitors are roaming the decadent rooms, head to the outdoor section, especially the Irrgarten, or “Lost Garden,” a quirky topiary maze. The original maze was taken down in the 19th century, allegedly because members of high society were meeting within its walls for frisky business. But the maze was rebuilt in the 1990s using the plans for the original 17th-century maze. It’s absolutely worth the time to find your way out. Bring your own breadcrumbs… just in case.

10 things to know about Graz – UNESCO City of Design