Packed into nine small islands, the Azores archipelago in the middle of the Atlantic Ocean boasts a geographical diversity bursting with natural wonders.

Sometimes referred to as the “Hawaii of Europe,” the Azores Islands are a dream come true for nature lovers and outdoors enthusiasts. Thank the volcanoes—they’re the reason behind it all. Just bear in mind that the saying “If you don’t like the weather now, just wait a few minutes” is 100% true in the Azores, where even the souvenir T-shirts and magnets reflect this ambivalence of weather patterns. You may experience dazzling sunshine, strong winds, thick fog and torrential rain all in the span of an hour, or less, so plan your outdoor excursions carefully. 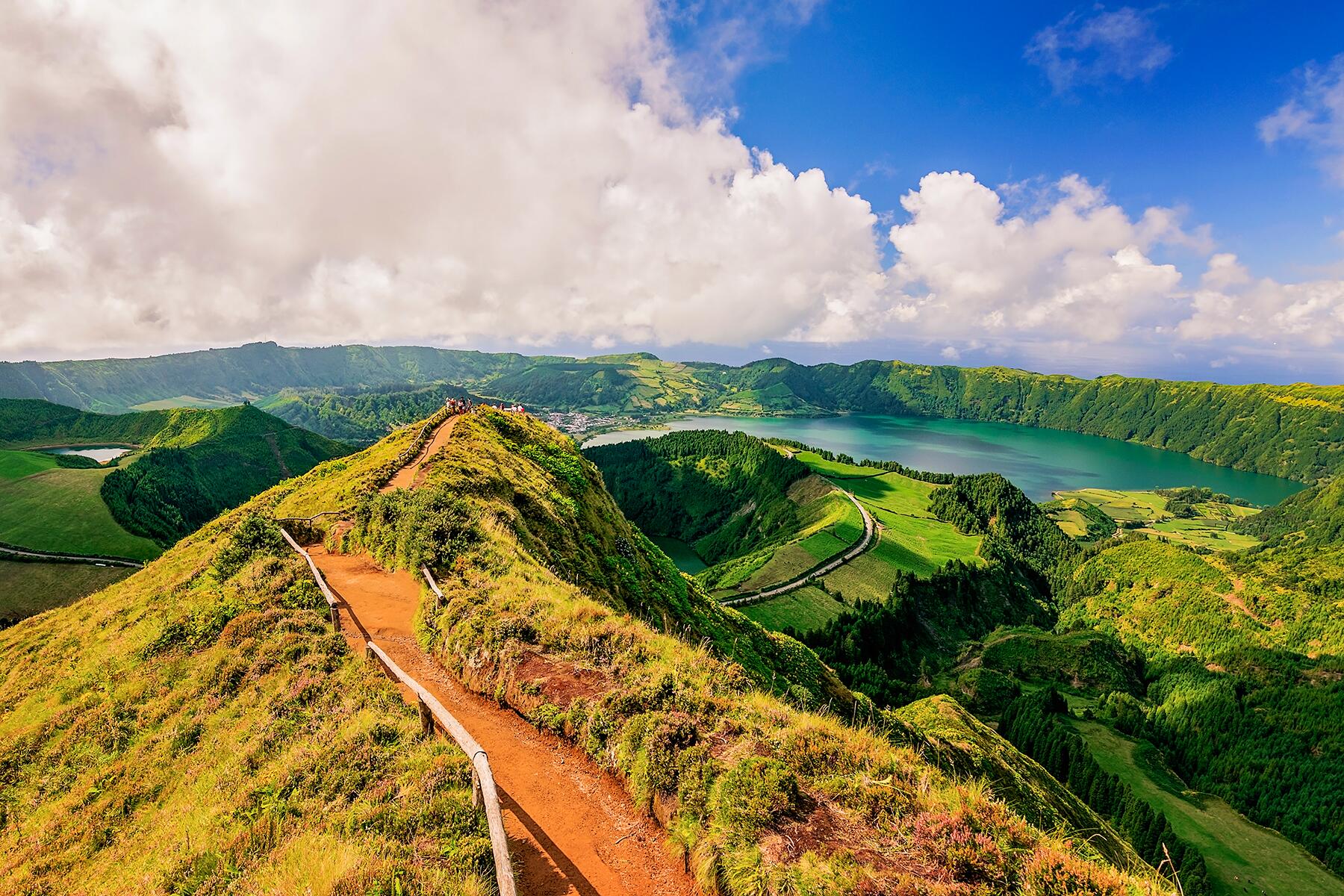 Once upon a time, there lived a princess with beautiful, emerald-colored eyes. The princess fell in love with a poor, blue-eyed shepherd boy, but her father, the king, had no intention of allowing such a marriage to take place. As they parted forever, the young, heartbroken lovers wept profusely, each filling up a volcanic crater with their tears (or so the story goes…). Today, these hypnotic lakes are known as Lagoa Azul (Blue Lake) and Lagoa Verde (Green Lake), located in the valley town of Sete Cidades. Besides telling people that you’ve seen one of the 7 Natural Wonders of Portugal, you’ll also have a jaw-dropping background for a selfie. 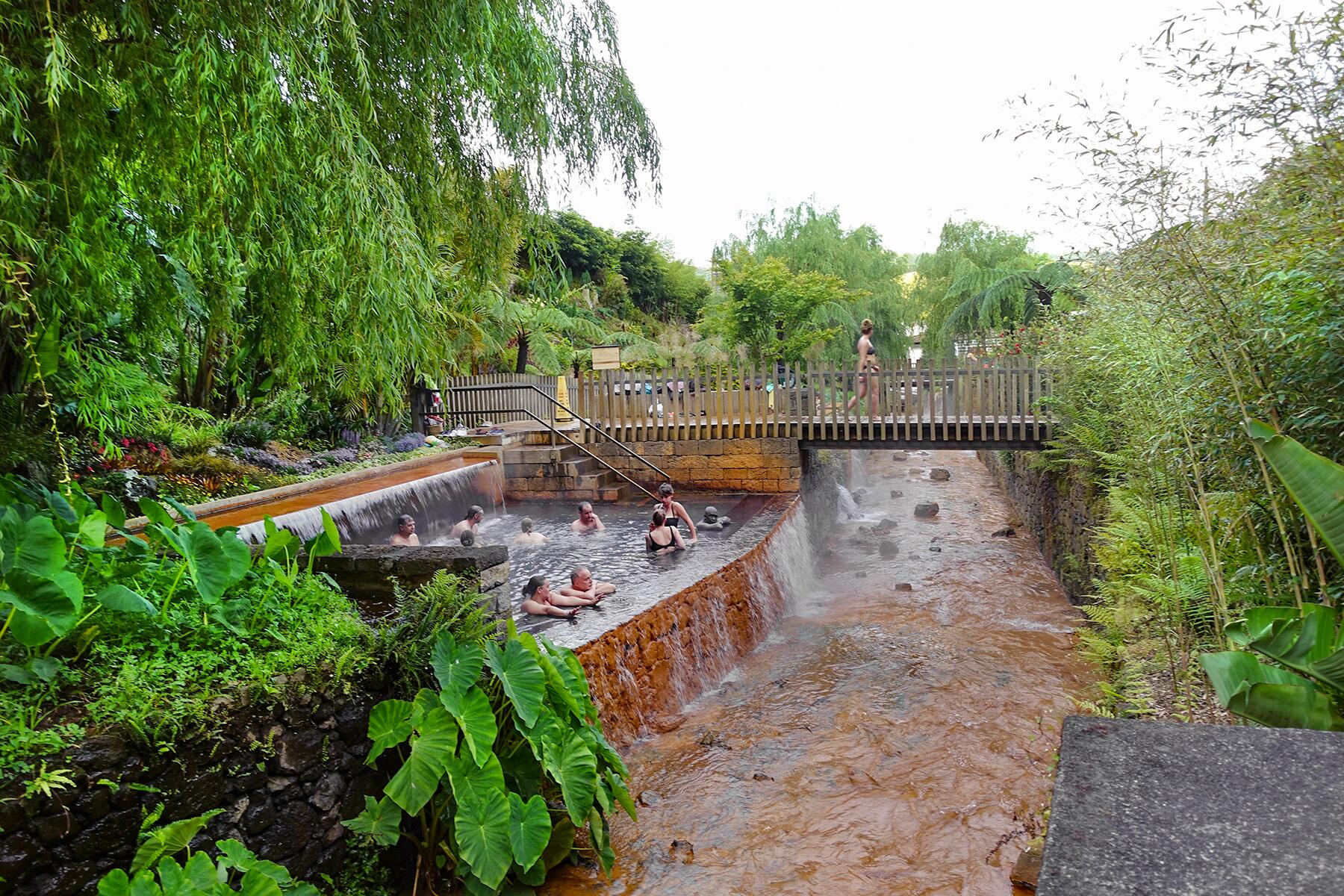 Surrounded by tropical foliage and bright flowers, you can slip into the soul-soothing, iron-rich waters of the volcanic hot springs at Poça da Dona Beija in the town of Furnas, just a half-hour drive from Ponta Delgada. You’ll know you’re approaching Furnas from the strong scent of its sulfur springs. Each of the five, deep-orange-colored thermal pools offers different depths and temperatures (and are named accordingly), so you can pick and choose depending on your mood. Just be sure to rinse out your bathing suit afterward if you don’t want it to turn orange. Another volcanic feature of Furnas are the vents in the ground (fumaroles) releasing geothermal steam, which is harnessed by locals to cook a stew known as “cozido das Furnas.” 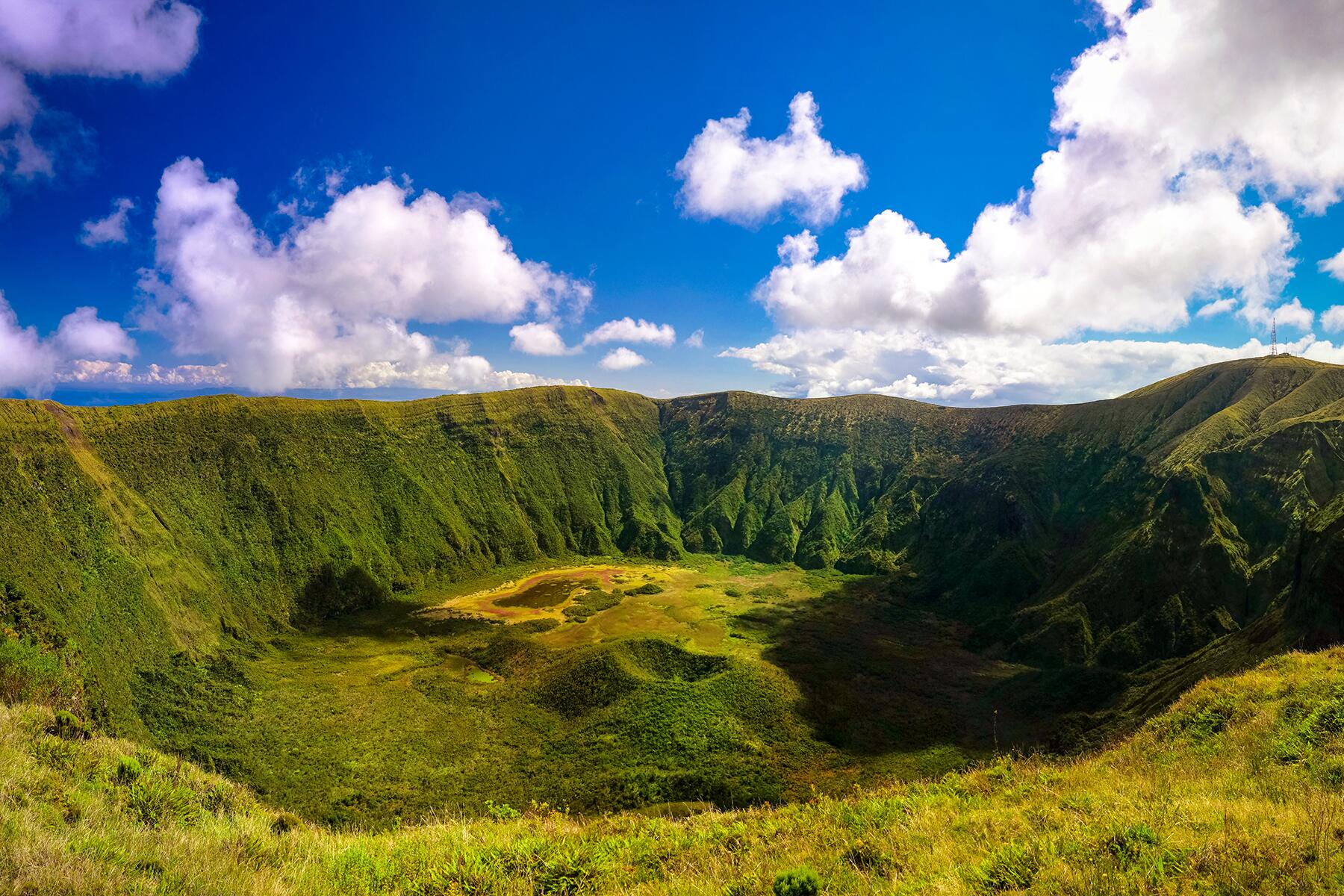 A short ferry ride from Pico or São Jorge, Faial Island offers you the thrilling opportunity to stare down into the 1,300-foot depths of a volcanic cone known as Caldeira do Faial. (To make sense of the unique geography of the Azores, be sure to visit the nearby Capelinhos Volcano Interpretation Center.) Because it’s protected as a natural reserve, you’ll need to hire a guide to trek down into the caldeira. But there’s a hiking trail to take you around the perimeter of this 1.25 mi-wide caldeira for epic ocean views. Bonus for plant lovers: Caldeira do Faial is home to the rarest orchid in all of Europe. 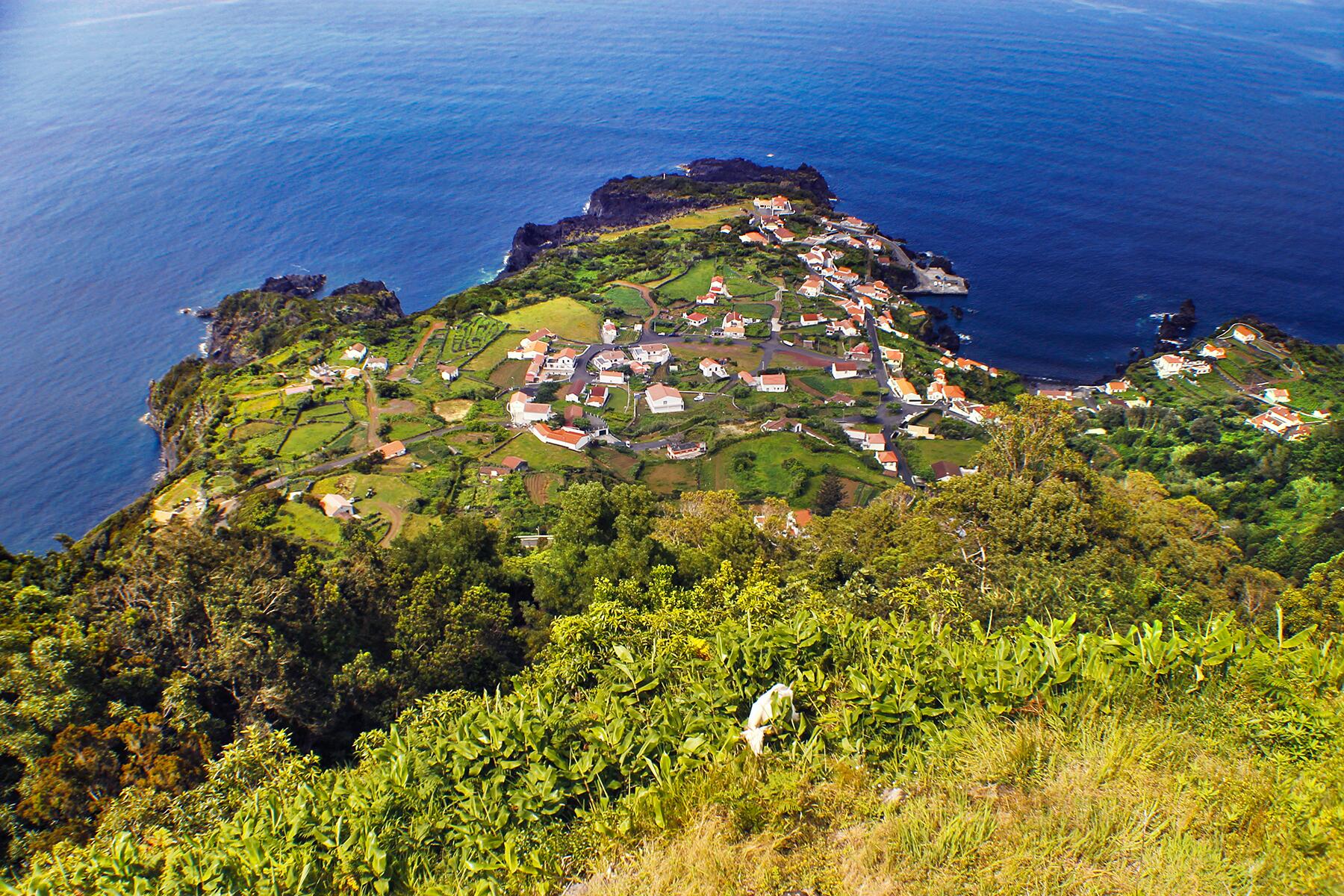 As you leisurely circle the island by car, you’ll look out into the infinite ocean. Staring up at the moody clouds, you hope it won’t rain again. But when you finally look down from atop a grandiose cliff, you will discover yet another Azorean secret. Known as fajãs, these bright, green plains (sometimes populated with homes) stretch out to the water and have been formed from landslides and lava flowing out to meet the ocean. There are over 50 fajãs scattered throughout the narrow, 94 square miles that make up São Jorge Island, but one the most majestic and well-known is Fajã da Caldeira do Santo Cristo, which is also known for its clams. You can get a taste of these famous mollusks at the Restaurante Fornos de Lava.

But taking photos from far away isn’t enough you need to get to know these lush, life-filled fajãs with an invigorating hike. Even with shorter hikes, you can encounter two of them, Fajã dos Vimes and Fajã da Fragueira in 1.5 hours, or Fajã do Mero, Fajã Penedia and Fajã Pontas in 3 hours by following the Norte Pequeno loop. Serious adventurers can scope out fajãs across half the island with an overnight hiking trip via the 41.5 km-long trail known as the Great Route of São Jorge. 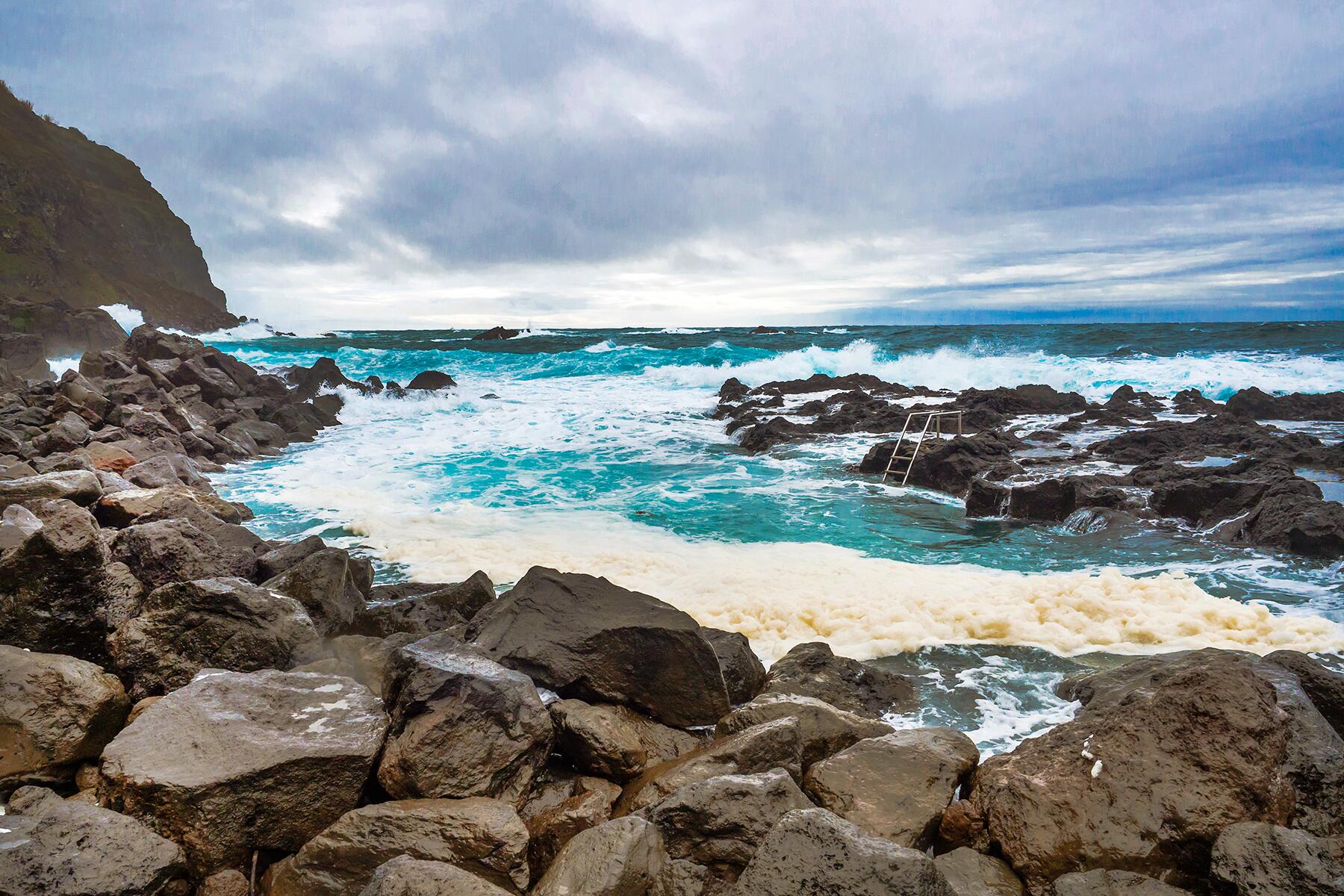 At mid-morning, by a tiny inlet on the western coast of São Miguel, you’ll find clothes, bags, and shoes shed across the rocky shore of Ponta da Ferraria. That’s because locals and savvy tourists of all ages are lowering themselves carefully into the very warm natural pool that only the low tide reveals. It’s the blending of chilly mid-Atlantic waters with the bubbling, sulfurous hot spring originating from a volcanic vent in the ocean floor that creates this magical hot tub experience. 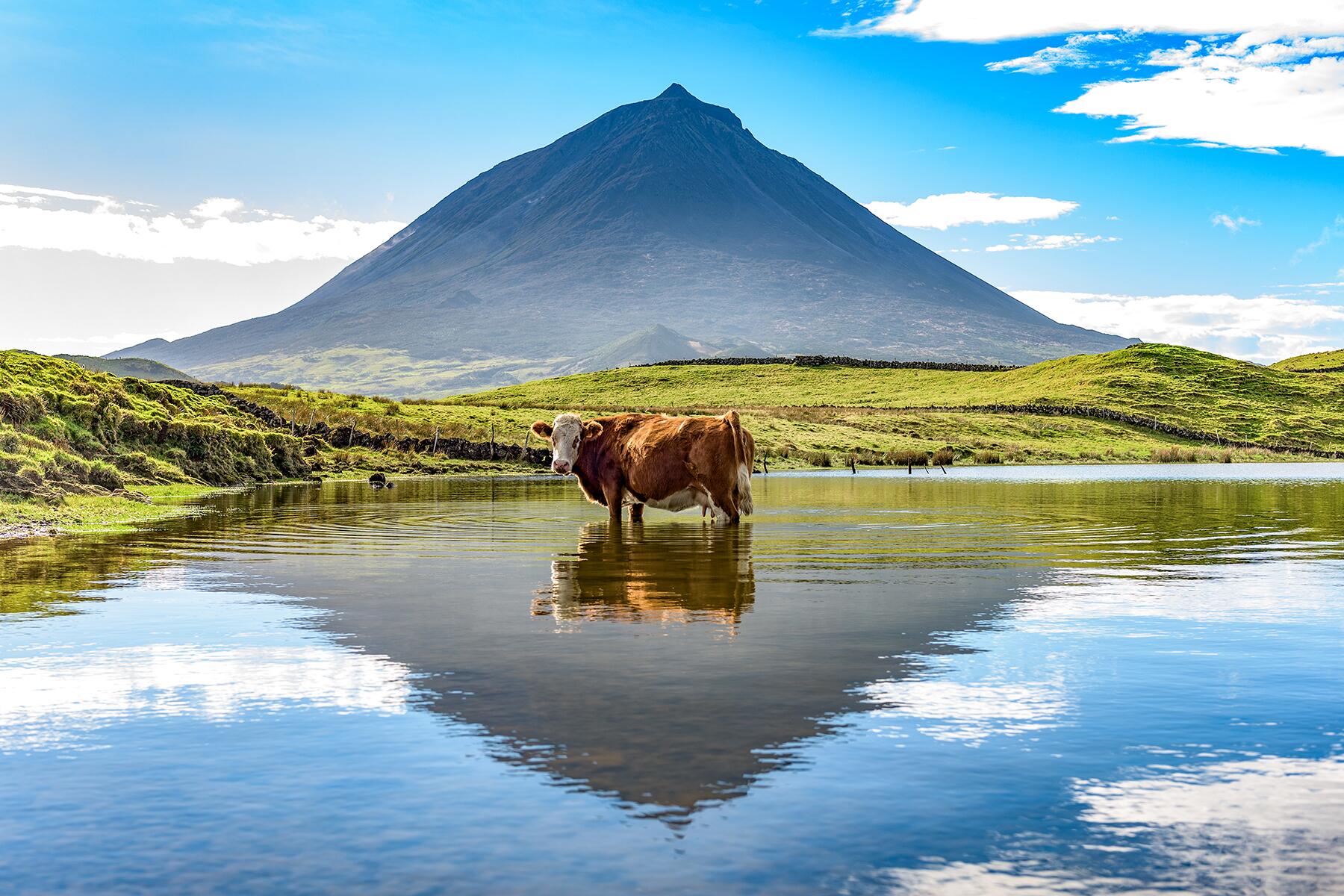 From the nearby islands of São Jorge and Faial, the mighty Pico Mountain (a dormant volcano) of Pico Island is always visible, whether it sits like a ghost behind frequent fog or storm clouds, or when its purple silhouette stands out hazily against the fiery drama or pastel smudge of a sunset. With a height of 2,351 meters, Montanha do Pico wins for highest point in the Azores, tallest mountain in all of Portugal, and third tallest mountain in the Atlantic. The climb to the summit is not for beginners, but you can pay to join a guided hike. There’s also a fee of 20 euros for the permit to access the summit, even if you do not use a guide. For the “Pico light” experience, there are several hiking trails of various difficulty levels to take you around the mountain at a lower height. 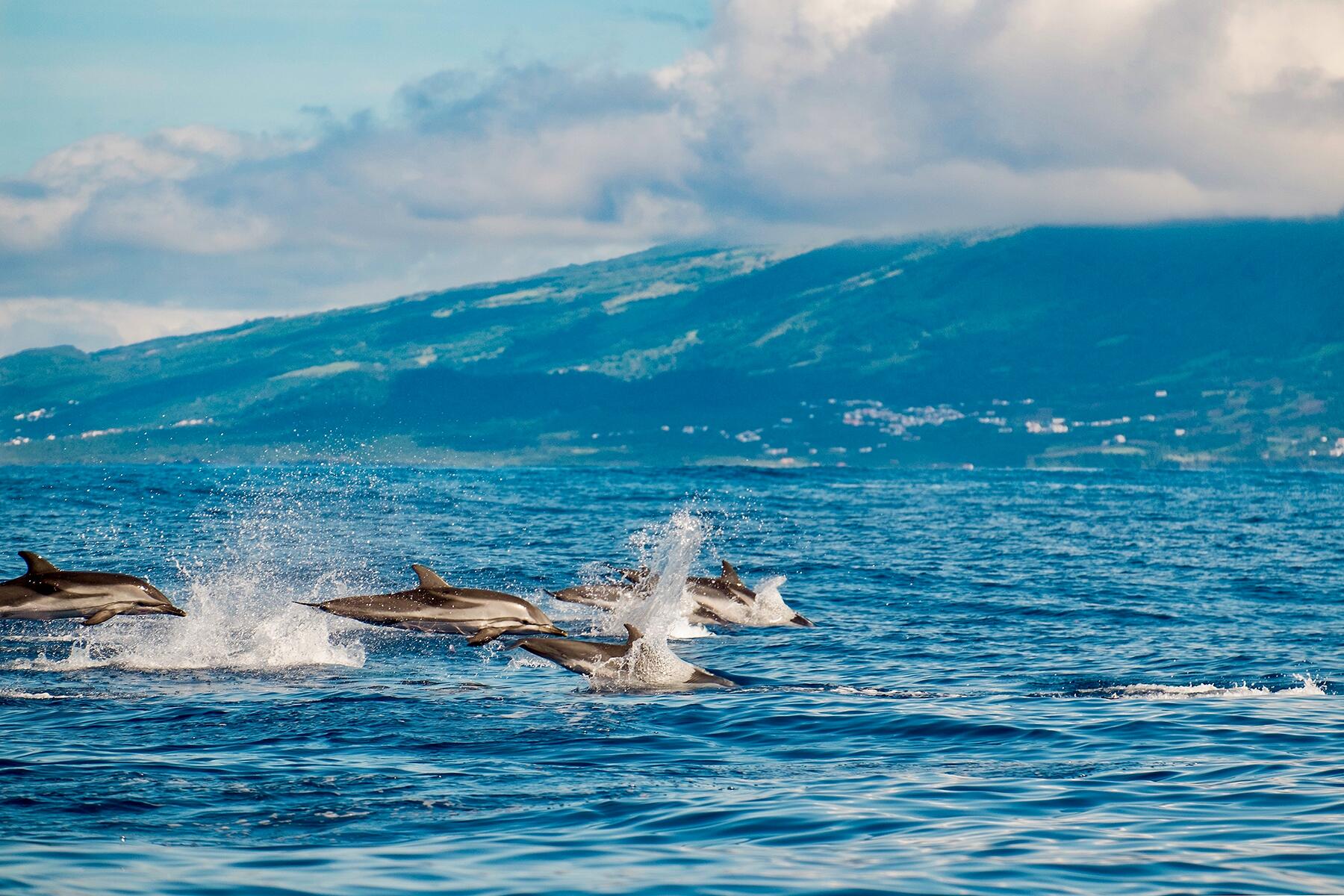 Far away from continental coasts, over 27 species of whales and dolphins choose to pass through the Azores Islands from April to October as part of their migration to and from northern feeding grounds. Although the type of whales seen depends on the month, the most frequent sightings include the sperm whale, fin whale, blue whale, and, sometimes, the humpback whale. Explore one of the world’s largest whale sanctuaries with a wide range of boat tour companies based in Lajes de Pico Harbor. To make sure you get your money’s worth, these companies have the help of marine biologists onboard and professional spotters (vigias). 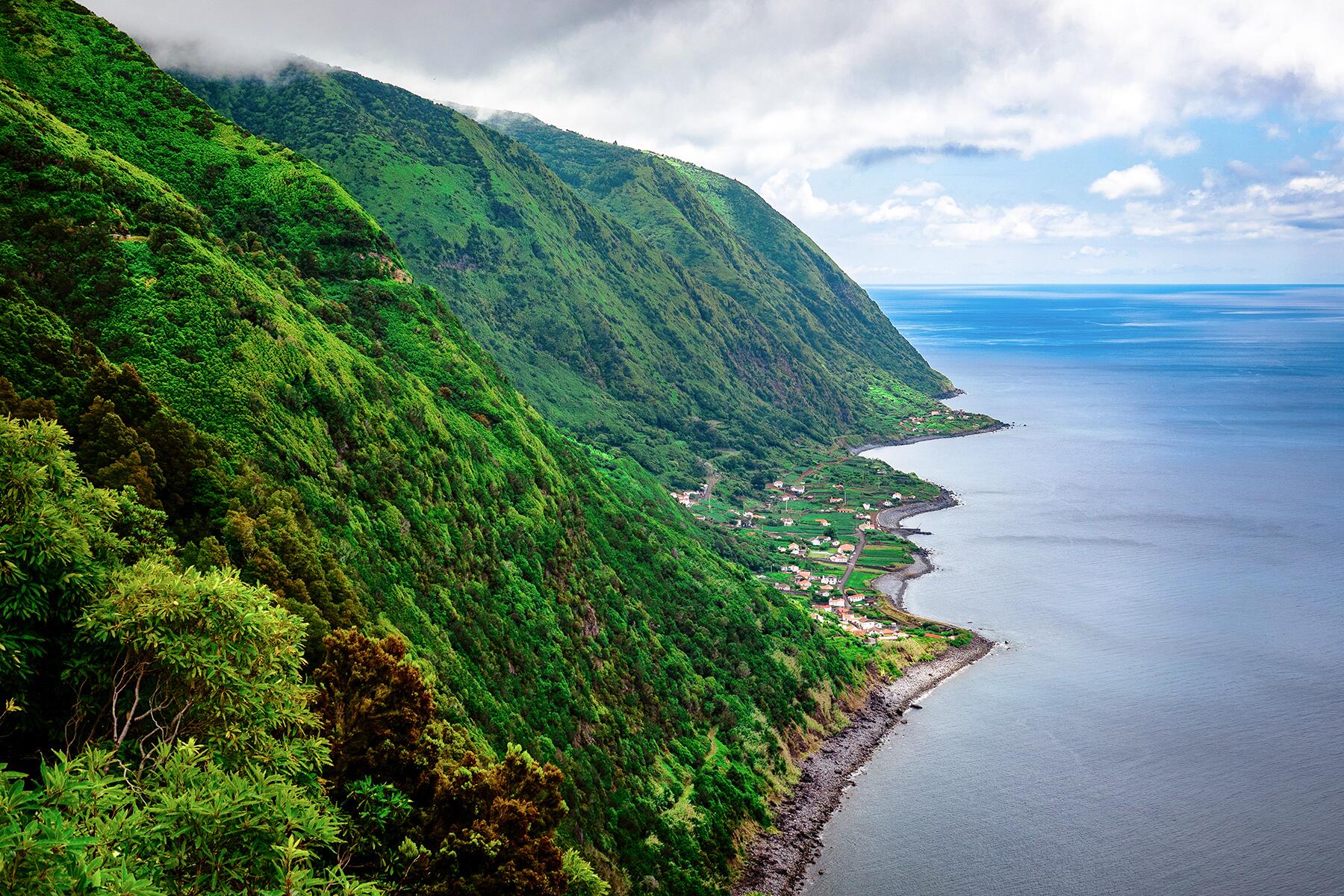 Not only is Cafe Nunes one of the most remotely located cafes in the whole world, it also comes with its own coffee plantation, which just happens to be the only one in Europe. São Jorge’s special microclimate nurtures the growth of these coffee beans in the Fajã dos Vimes, which are planted behind the home of Manuel Nunes and his family. The plantation is said to have been in the family since Manuel’s great grandfather emigrated from Brazil to São Jorge Island with a bag of beans. After Mr. Nunes or his wife Alzira guides you around the plantation and production area, hang out inside the small cafe to sip a cup of Azorean coffee, and buy some of these rare beans to take home with you (only 100 to 150 kg of beans are produced each year).