Castles, enchanted forests, coal, and cathedrals sound like the makings of a fairy tale, and, in a way, that’s exactly what a road trip through northwest and central Germany is like. In a landscape that inspired so many myths and legends, it’s fitting to try to seek out the truth behind them all. Using a few UNESCO World Heritage Sites as your guide, you can bask in the same sunlight as Charlemagne once did in his Palatine Chapel, walk atop the treetops in one of the world’s oldest — and most enchanting — forests, and gaze upon Hercules himself. Whether you follow this list from west to east, or east to west, we think you’ll agree: Germany truly is a land full of wonders. 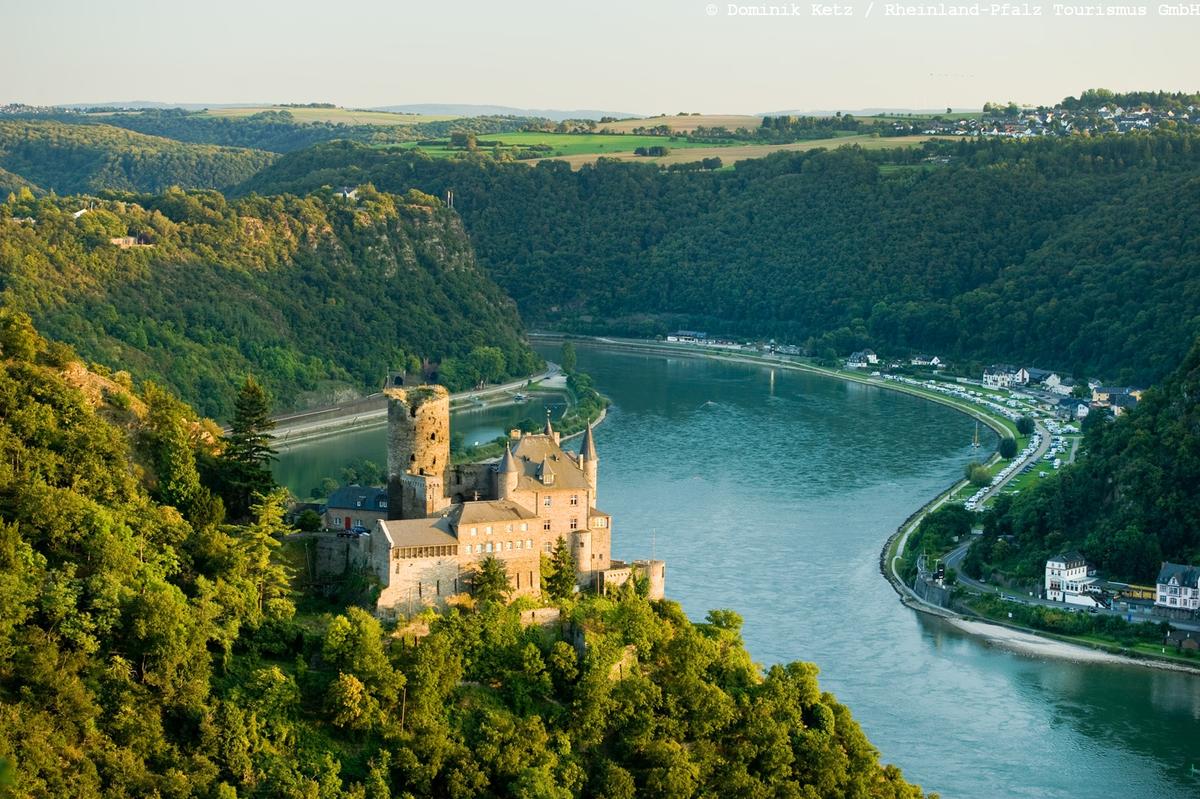 Scenic valley vistas and stunning castles can be found across Germany, but nowhere more so than the Upper Middle Rhine Valley. This 65-kilometer swath of land is a UNESCO World Heritage Site and is conveniently just northwest of the Frankfurt Airport, making for a great starting point on any adventure. Set the tone for your magical trip with the Koblenz cable car to see stellar panoramic views of the valley. After you take in the city’s grandeur, explore Marksburg Castle. This storybook castle overlooking the Rhine is the only knight’s castle still standing along the Rhine River and is open for 50-minute tours daily. For more medieval exploration, look no further than the town of Oberwesel, where its vaults house 2,000 years of viticulture history. You can take a guided tour through more protected cultural land — and sample some of the finest wines in Europe. After all, Rhine Valley is a wine (and castle) country.

Walk in the Steps of a Giant in Aachen 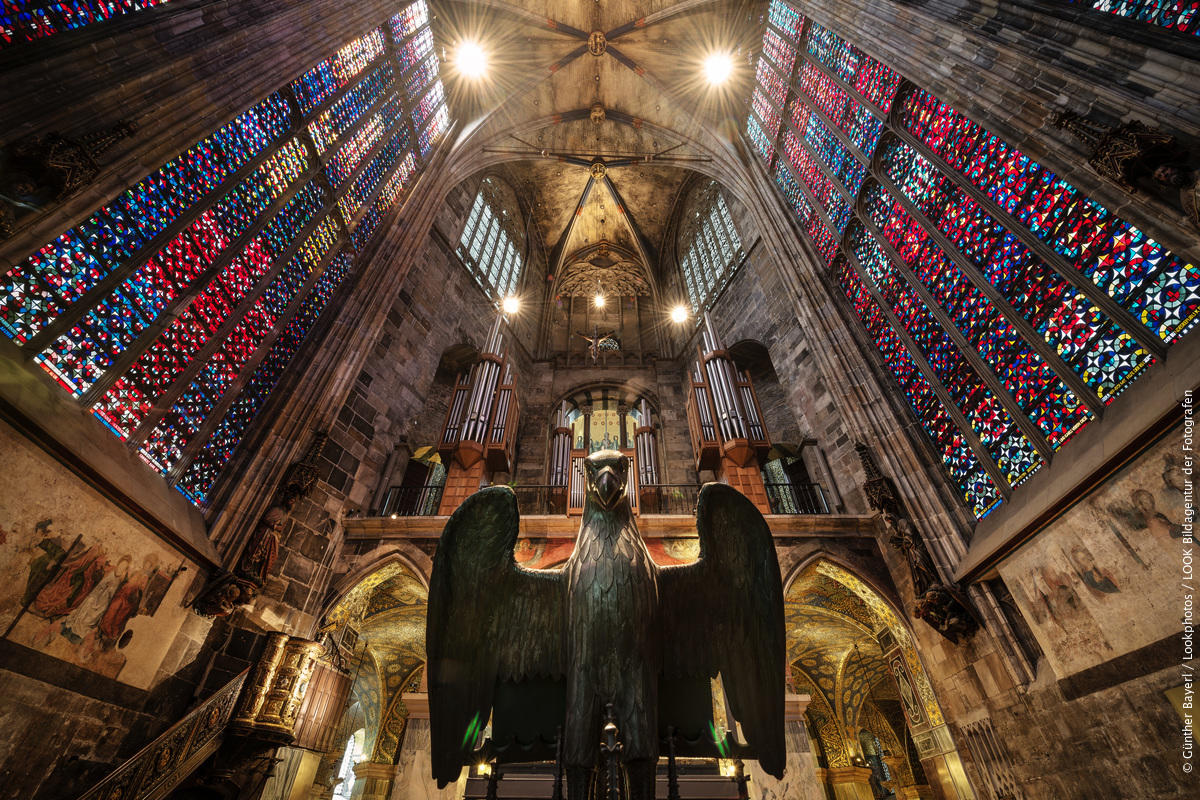 You will encounter the Palatine Chapel of Emperor Charlemagne in Aachen. Just under a two-hour drive from Oberwesel, the city is home to the iconic Aachen Cathedral, which houses the Palatine Chapel. Charlemagne, the Father of Europe, designed the chapel. Noted as one of Germany’s (and the world’s) most important cultural sites, Aachen Cathedral was Germany’s very first UNESCO World Heritage Site. From Italian- and Greek-inspired marble columns to Carolingian bronze gates, you’ll find exceptional artistry in the architecture here. Deeper within the cathedral are treasured items such as a reliquary-bust of Charlemagne known as the cross of Lothar and a marble sarcophagus (yes, Egypt isn’t the sole home of sarcophagi) decorated with a relief of the Abduction of Proserpine which once contained the body of Charlemagne. We recommend taking a guided tour for the best information on these prized relics. For those Charlemagne idolizers, check out the Centre Charlemagne for a full museum dedicated to the city with a lot of information on the king from the early Middle Ages — you’ll truly feel like you’re walking in the steps of a giant.

Make Belief You’re Royalty at the Castles at Brühl

After walking in the steps of the great Charlemagne himself, explore the well-manicured gardens and the halls of the Castles of Augustusburg and Falkenlust in Brühl — and pretend you’re royalty yourself. Hardly more than a taxi ride away, the Castles at Brühl are just over 50 minutes from Aachen. The castles and landscaping are prime examples of 18th century Rococo architecture, and you can practically feel the luxury and opulence of it all when waltzing through the marble and stucco finishes that cover the space. It’s worth noting that Augustusburg Palace, which was once home to the prince-archbishops of Cologne, is available by guided tour only. The Falkenlust hunting lodge, meanwhile, can be explored at your own pace and audio guides are available.

Discover Germany’s Past in the Zollverein Coal Mine 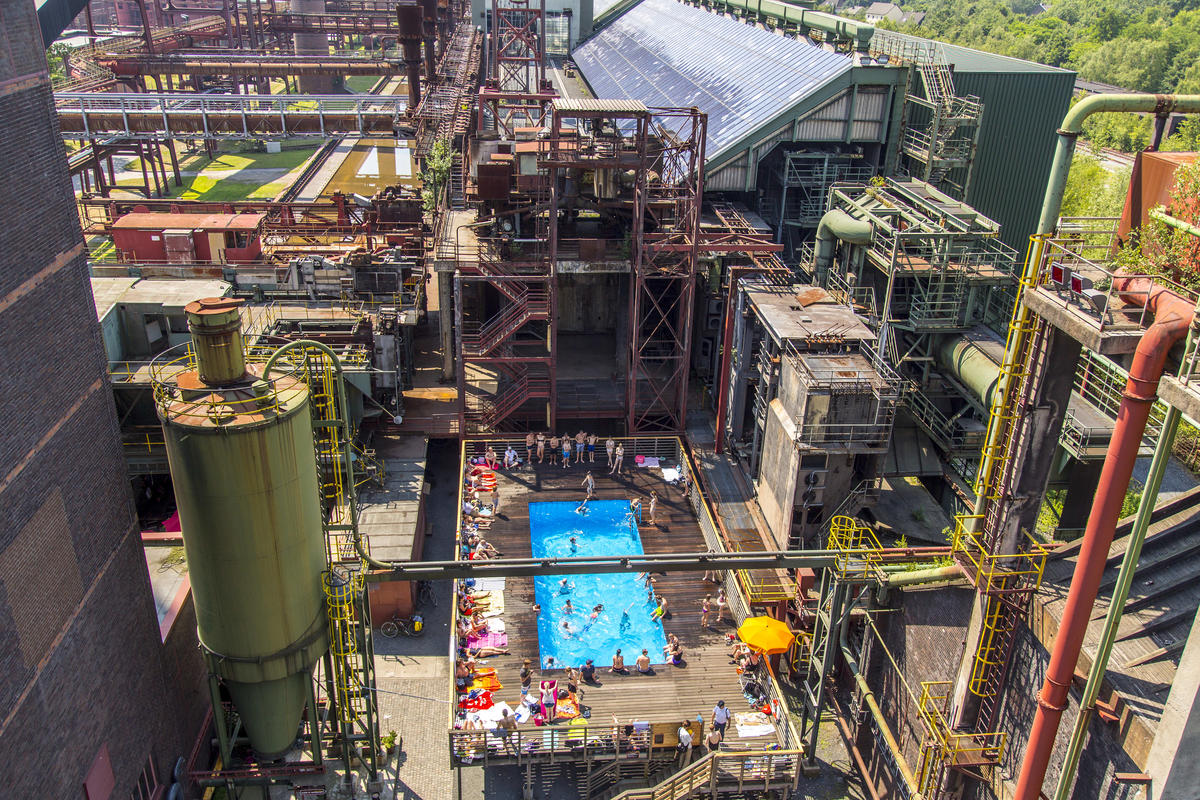 This UNESCO World Heritage Site is unique in that it captures the build-up and eventual downfall of the coal industry in Germany. Once a site of massive economic production, architecturally speaking, the mine complex showcases Germany’s transition from Expressionism to Cubism and Functionalism and it’s considered the most beautiful coal mine in the world. No longer in use, you can experience a tour of coal and the lives of the miners and stop by the Ruhr Museum, which combines the natural and cultural history of the area entrenched in economic tradition. During the summers, you can also check out the free on-site pool, concert series, and specialty festivals.

A Garden Fit for a God in Kassel 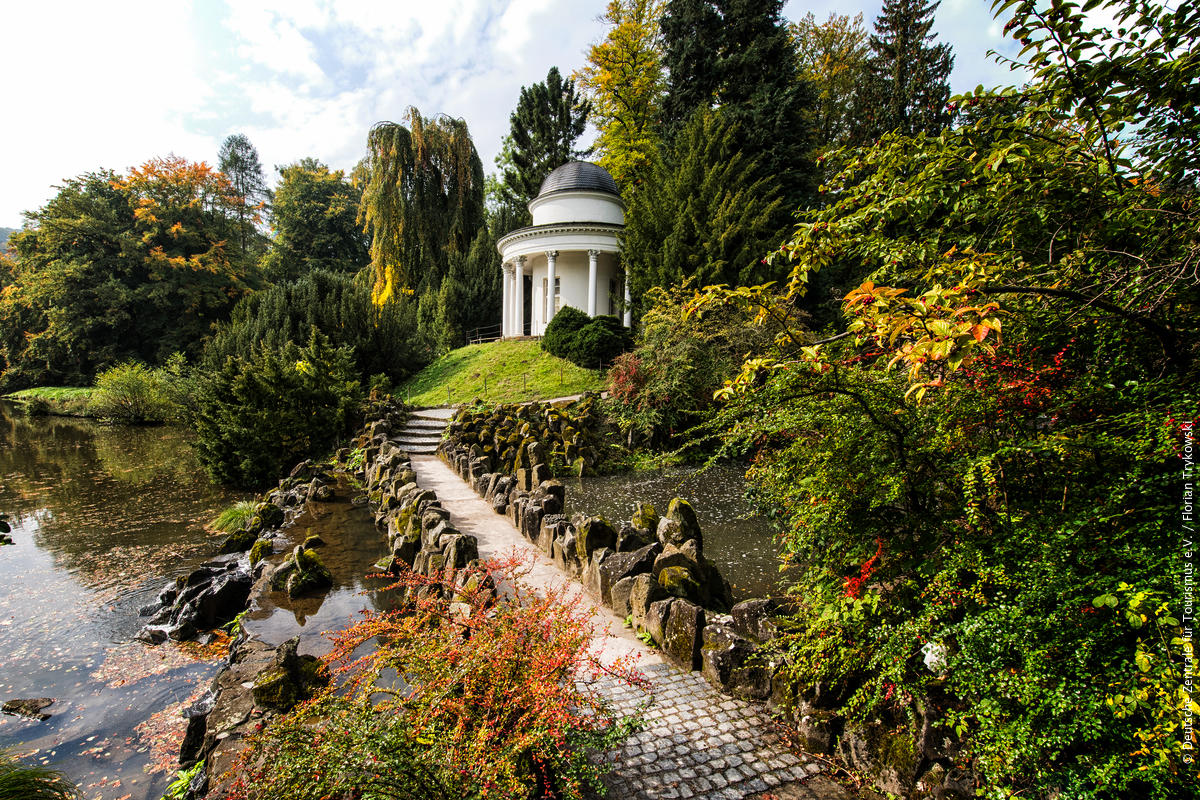 Venture two more hours east for the sixth of this nine-stop road trip to Kassel to see a true god among men. Just on the limits of Kassel is Wilhelmshöhe Park, where you’ll see the Hercules Monument. Best viewed from the river, the Hercules Monument is considered to be one of the most important landmarks in the entire city. That’s not the only thing waiting to be discovered within the park, though. Venture farther and you’ll discover some of the finest examples of Baroque and Romantic architecture of Wilhelmshöhe Castle alongside the manicured and impeccably groomed lawns. Guided tours are available, and running with the fairy tale theme of this road trip, the Wilhelmshöhe Castle is open for exploration Tuesday-Sunday.

Time Travel Is Possible in Höxter 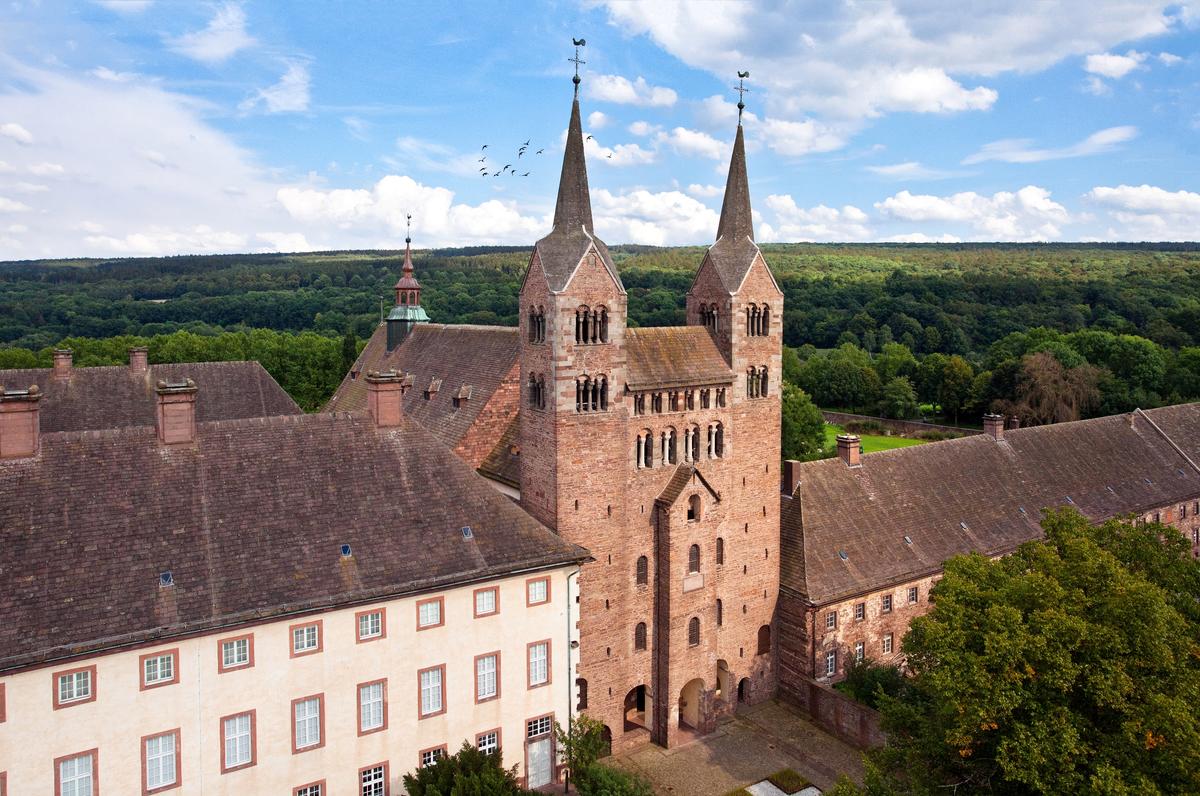 An hour north of Kassel is a rural monastery called the Imperial Abbey of Corvey — and it will make you believe time travel is possible. Located alongside the Weser River, the monastery was once one of the most influential and most important Benedictine monasteries of the Middle Ages, and its square central building is actually the oldest west work that currently stands intact. History buffs should book a guided tour, which will walk you through the Carolingian period, to the early modern era, to the fall of secularization, and the redesigning in Biedermeier style. Who says time travel isn’t possible?

Check Out the Kicks in Fagus Factory 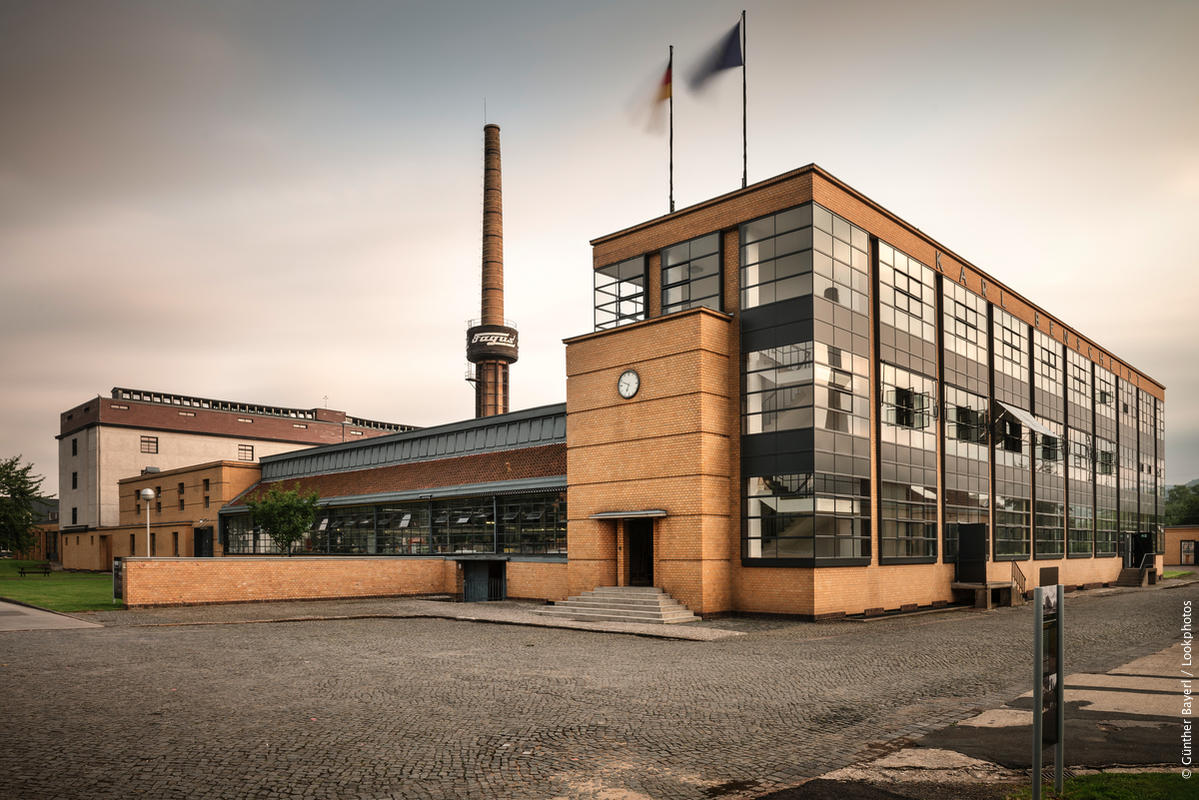 If we had to guess where Cinderella’s Fairy Godmother commissioned those glass slippers, we’d wager the Fagus Factory had a hand in it. A short drive northwest of Höxter is the next stop on the road trip, where the Fagus Factory sits in Alfeld. The 10-building complex and UNESCO World Heritage Site have been around since the early 1900s. It earned UNESCO World Heritage site accolades, though, for its architectural design, which foreshadowed the modernist movement. The factory is considered the first truly modernist structure in the world and is somewhat of a playground for anyone interested in functionalist architecture, European economic history, and industrialization.

Tip Toe Among Mighty Trees in the Beech Forests 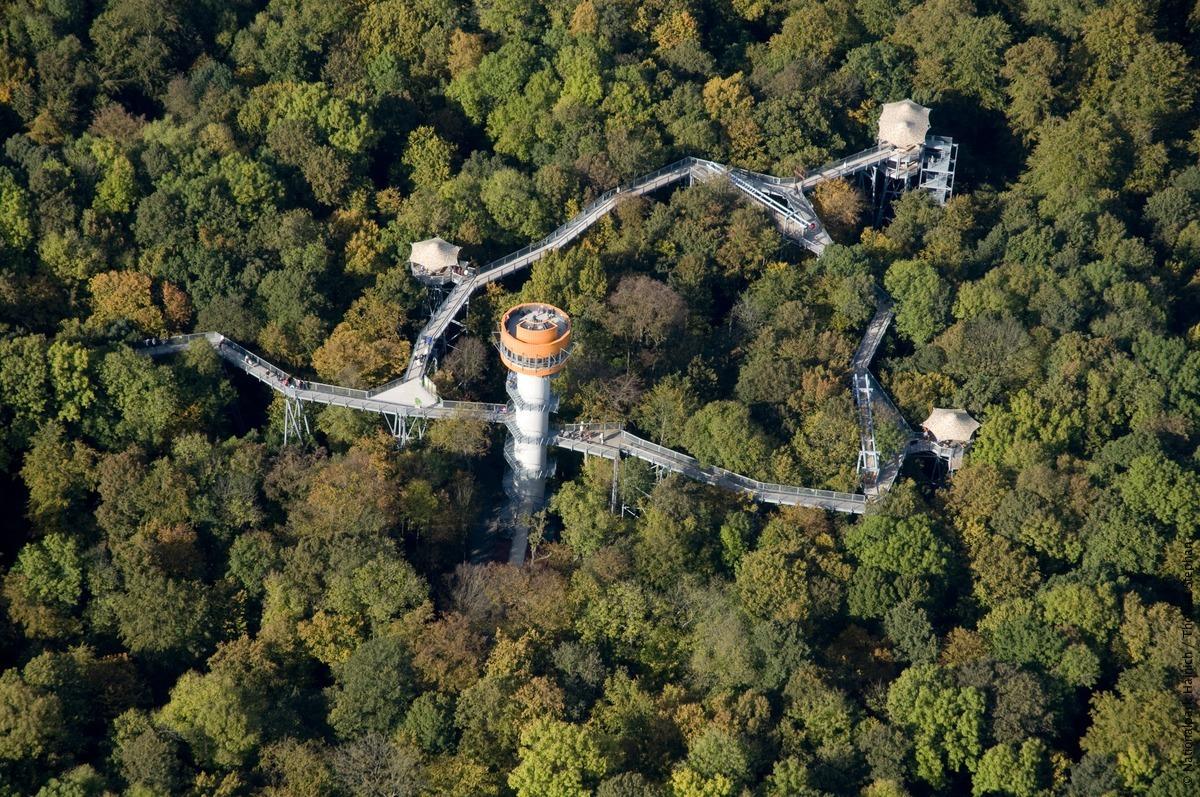 We’ve saved the most enchanting stop of your grand German road trip for last. European beech trees have been expanding in reach since the last Ice Age, a testament to the trees’ ability to withstand the change in climate and geography over thousands of years. The magical Beech Forests look like something out of Game of Thrones, and if you mosey on down to the Hainich National Park you can take in the area’s prime attraction: the canopy walk. The canopy walk is a fun network of easily accessible walkways far up among the tops of the highest trees in Hainich. Tiptoe amongst mighty trees (literally), and you’ll start to feel like you’re truly up in the sky. Bats, butterflies, woodpeckers, and wild cats are among the critters you can spot — or hear — from up high. For those planning on returning home out-of-country, the Hainich National Park puts you smack dab in the middle of Germany with Frankfurt International Airport just a two-hour drive away.