Are you craving some Hawaiian history and culture? Then you’re going to love this island! The Big Island is a fascinating place with many gems of living history. From beautiful Hulihe’e Palace to the Pu’uhonua o Hōnaunau National Historical Park, Petroglyph preserves, and ancient battle sites, there are many opportunities to get outside the typical tourist narrative and take a deep dive into the real story. Here is a list of some of the most significant Hawaiian historic and cultural sites around the Big Island. 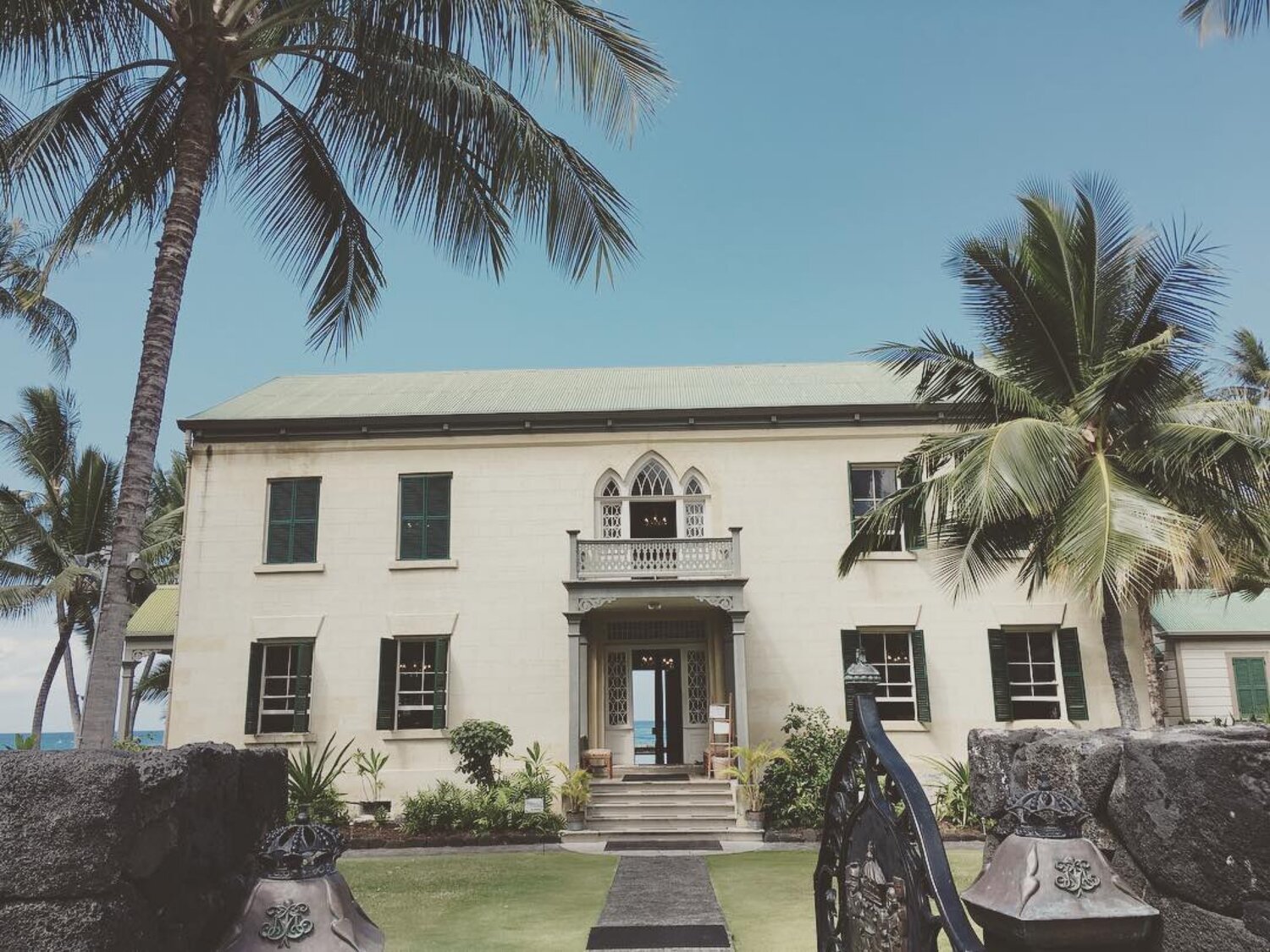 This elegant palace sits on Ali’i Drive next to the Kailua pier. Originally built as a summer residence for Hawaiian Royalty, Hulihe’e Palace was restored and preserved by the Daughters of Hawaii in the early 20th century and designated as a National Historic site in 1973. Today, it serves as a museum showcasing Victorian artifacts from the era of King Kalākaua and Queen Kapi‘olani, featuring beautiful koa wood furniture, portraits, Kapa, feather work, Hawaiian quilts, and artifacts from Hawai‘i’s royal past. Make sure to set aside a solid hour to look at everything! Across the street is the Mokuaikaua Church, Hawaii’s oldest Christian church, founded by missionaries in 1820. Palace admission is $10/$8 HI resident. 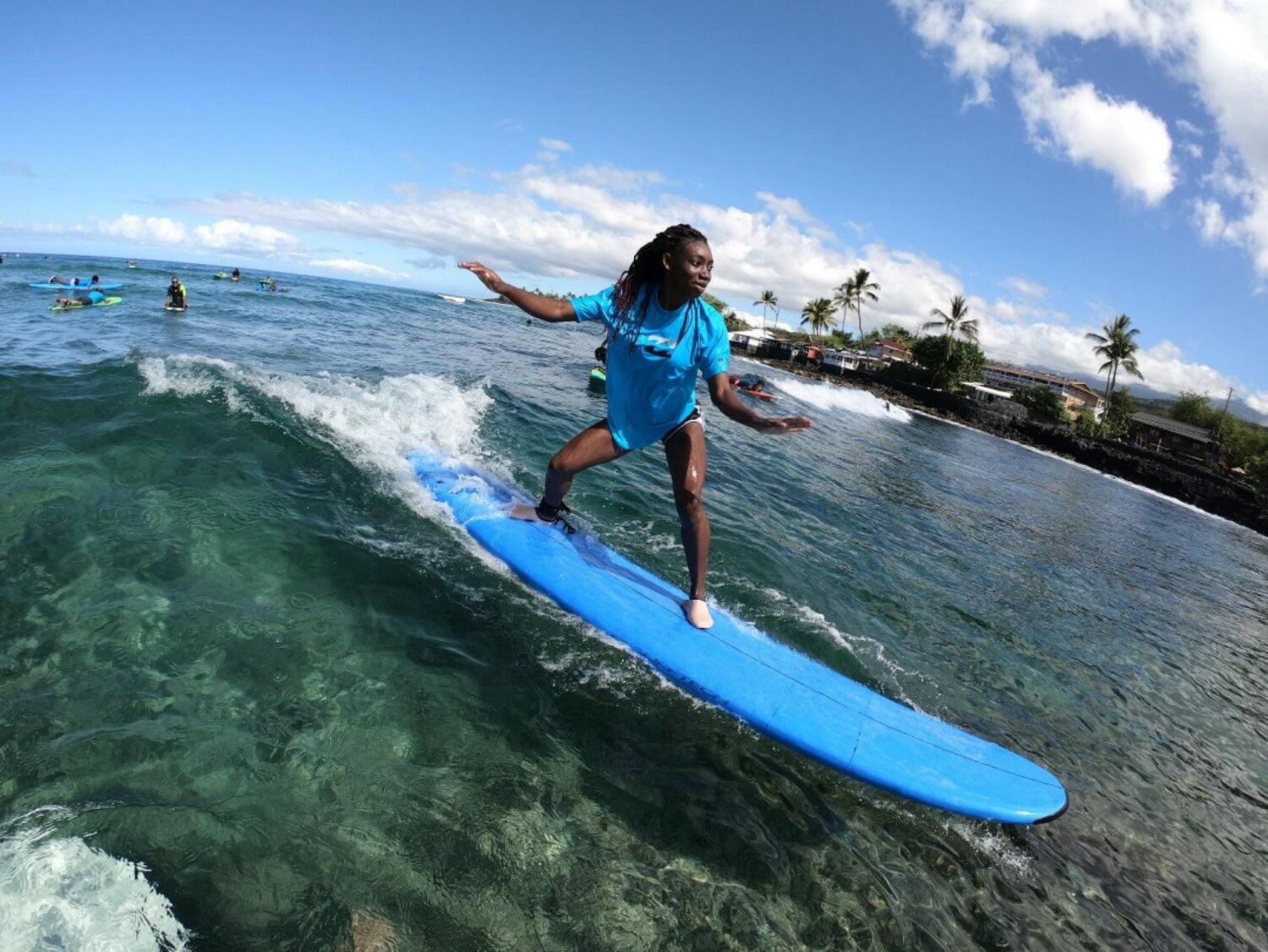 A historical surf spot Kahalu’u is the site of Kuʻemanu Heiau (ancient temple) which was used to pray for good surf and to observe surfers. You can see the remains of the Heiau next to the little blue church. DO NOT walk on or touch the Heiau. Today, Kahalu’u Bay is still enjoyed by surfers and is a great place to take a surf lesson, as highlighted in our previous blog on surfing in Kona. The Kahalu’u Keauhou area was home to Hawaiian royalty during the 18th and 19th centuries. King Kamehameha III was born in neighboring Keauhou Bay. The site is marked by a plaque by the Keauhou bay boat launch. 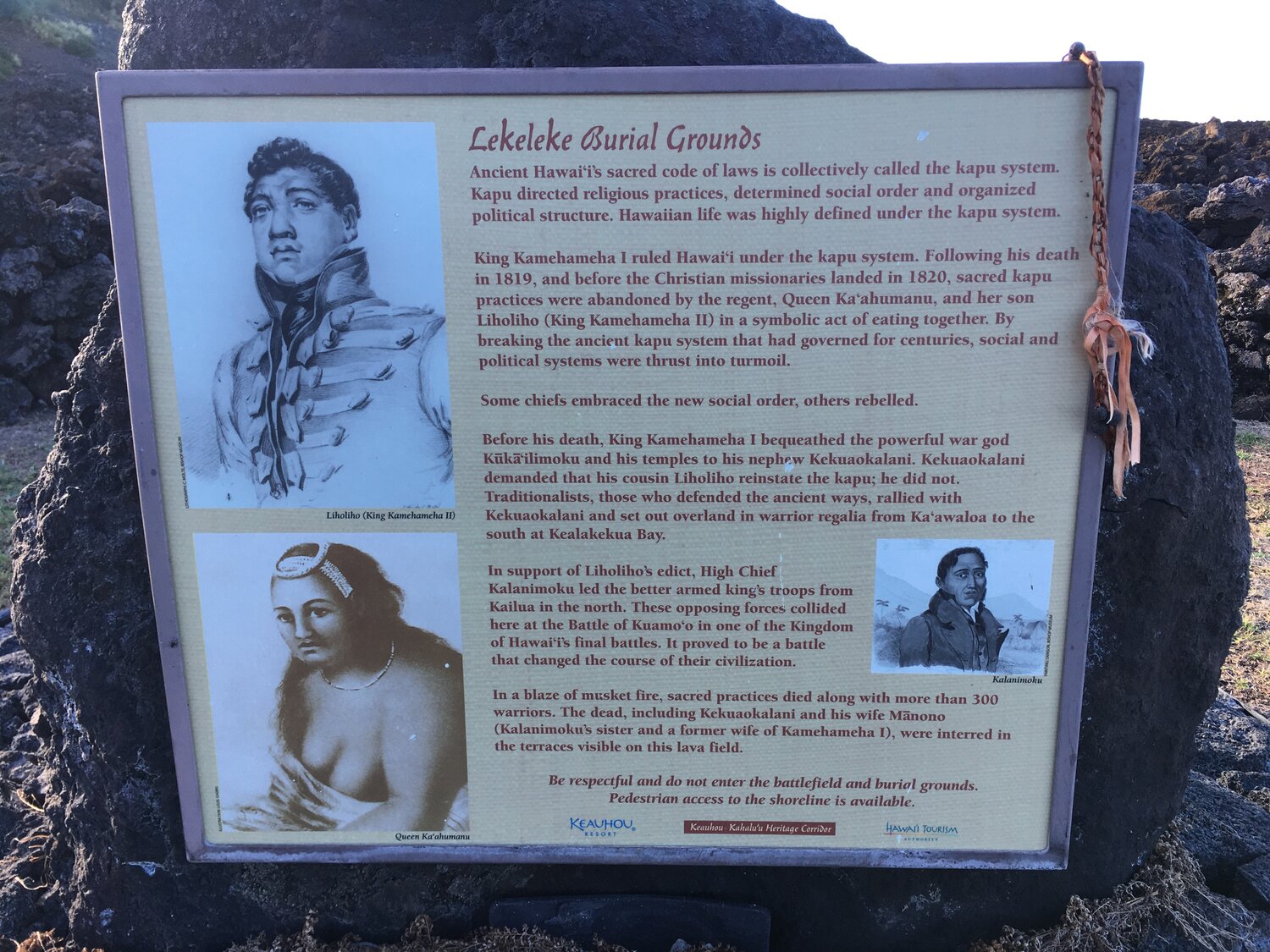 A short drive south from Keauhou Bay is the site of the Battle of Kuamo’o, fought in December 1819. It was the last and bloodiest battle fought in Kona between Hawaiians armed with Western guns. The fight, in a nutshell, was over keeping the traditional Kapu system and ancient Hawaiian religious beliefs or abolishing it. After Kamehameha, I’s death in May 1819, his son and successor Kamehameha II, who was just 22 years old at the time, was influenced to abolish the Kapu system by powerful older advisors like Queen Kaʻahumanu. Many people were outraged at this act, including his cousin, Kekuaokalani, who decided to lead an armed rebellion against him.

Kekuaokalani and his group of rebels fought against high chief Kalanimoku who was selected by Liholiho to lead the royal army. Kalanimoku had a cannon mounted on his canoe and was ultimately able to outpower Kekuaokalani and his forces with it in the second battle. More than 300 warriors were killed on both sides including Kekuaokalani and his wife Manono, who fought alongside him. The warriors are buried in the terraced lava rock hills above the Lekeleke memorial plaque. In 1820, the first missionaries arrived to settle in Kona aboard the Thaddeus, bringing a new God with them that would alter the course of Kona’s culture and history. 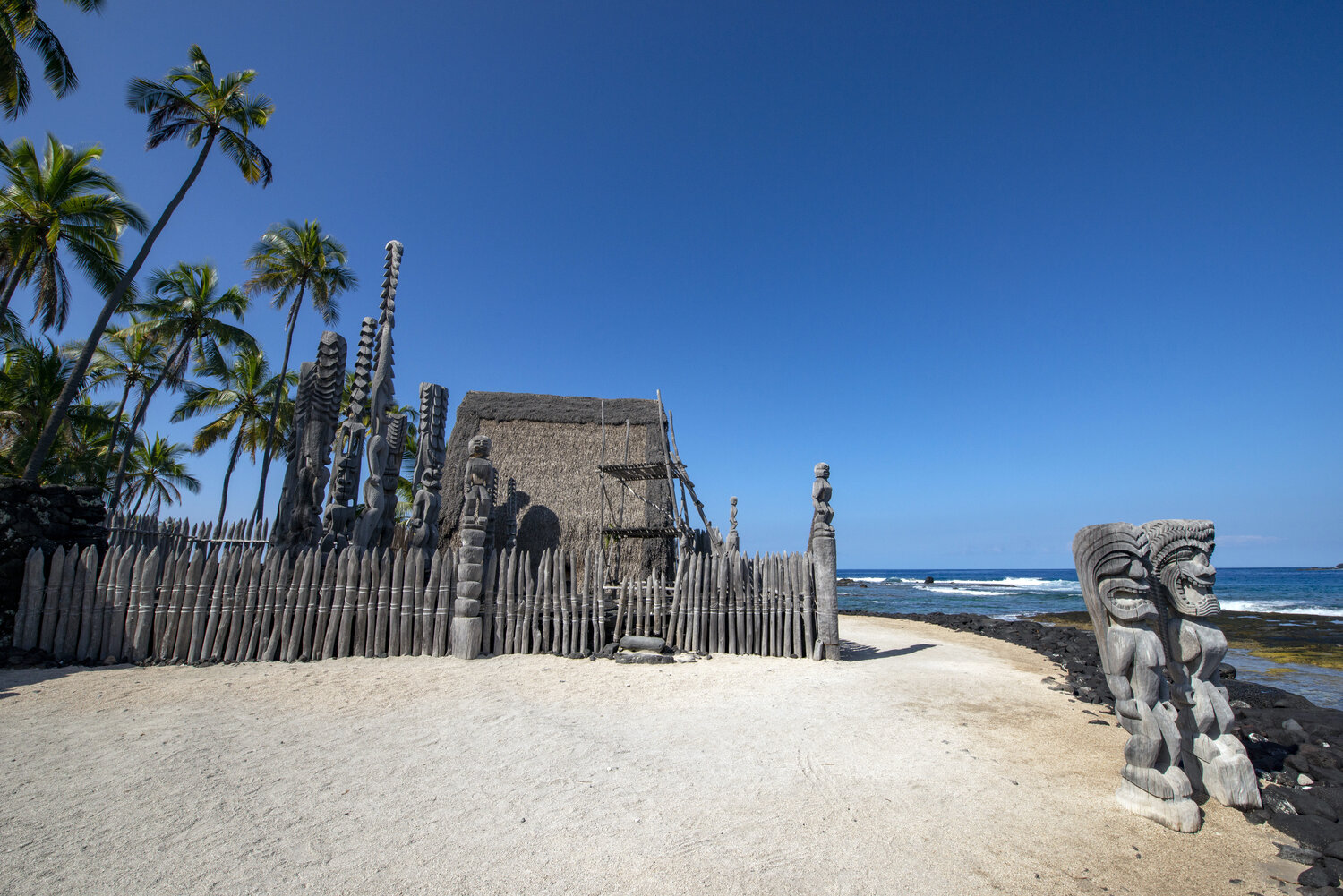 The only preserved Pu’uhonua in the Hawaiian Islands, this site is an incredible window into ancient Hawaii’s cultural and spiritual traditions. Under the Kapu system of ancient Hawaii, there were no prisons. Breaking a law was punishable by death. The only recourse was to run (or swim) for your life to the nearest Pu’uhonua (place of refuge). If you made it, you would be pardoned by a high priest and allowed to return home. Each district had a Pu’uhonua. In times of war, they were considered ‘off limits’ and used to shelter children and the elderly.

The Pu’uhonua o Hōnaunau was restored and designated as a National Historical Park in 1961. You can tour the grounds and check out the gift shop and book store at the Visitors Center – hours are 8:30 – 4:30. Entrance fees are $15 per car or $7 to walk or bike in. You can learn more about the Pu’uhonua o Hōnaunau and visit here. 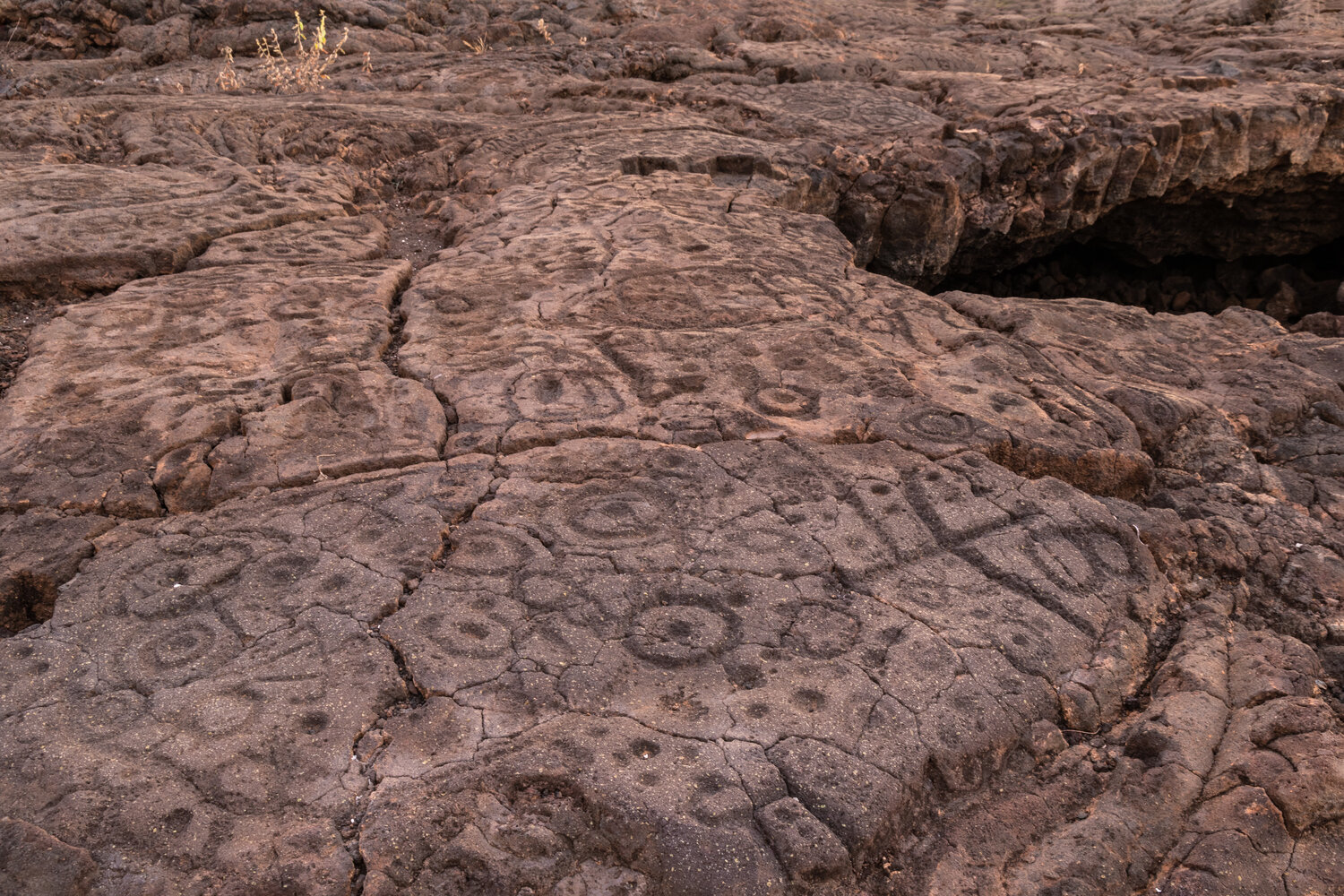 There are three different locations where you can see a large display of Hawaiian petroglyphs on the Big Island. Called “k’i’i pohaku“, or images in stone by Hawaiians, these carvings date as far back as the 16th century. Closest to Kona, there is the Waikoloa Petroglyph preserve and bit further north is the Puakō Petroglyph preserve. Within Hawaii Volcanoes National Park, there is the Pu’u Loa Petroglyph field near the bottom of scenic Chain of Craters Road. This article on Love Big Island’s website has more information on these three sites and the significance of petroglyphs. 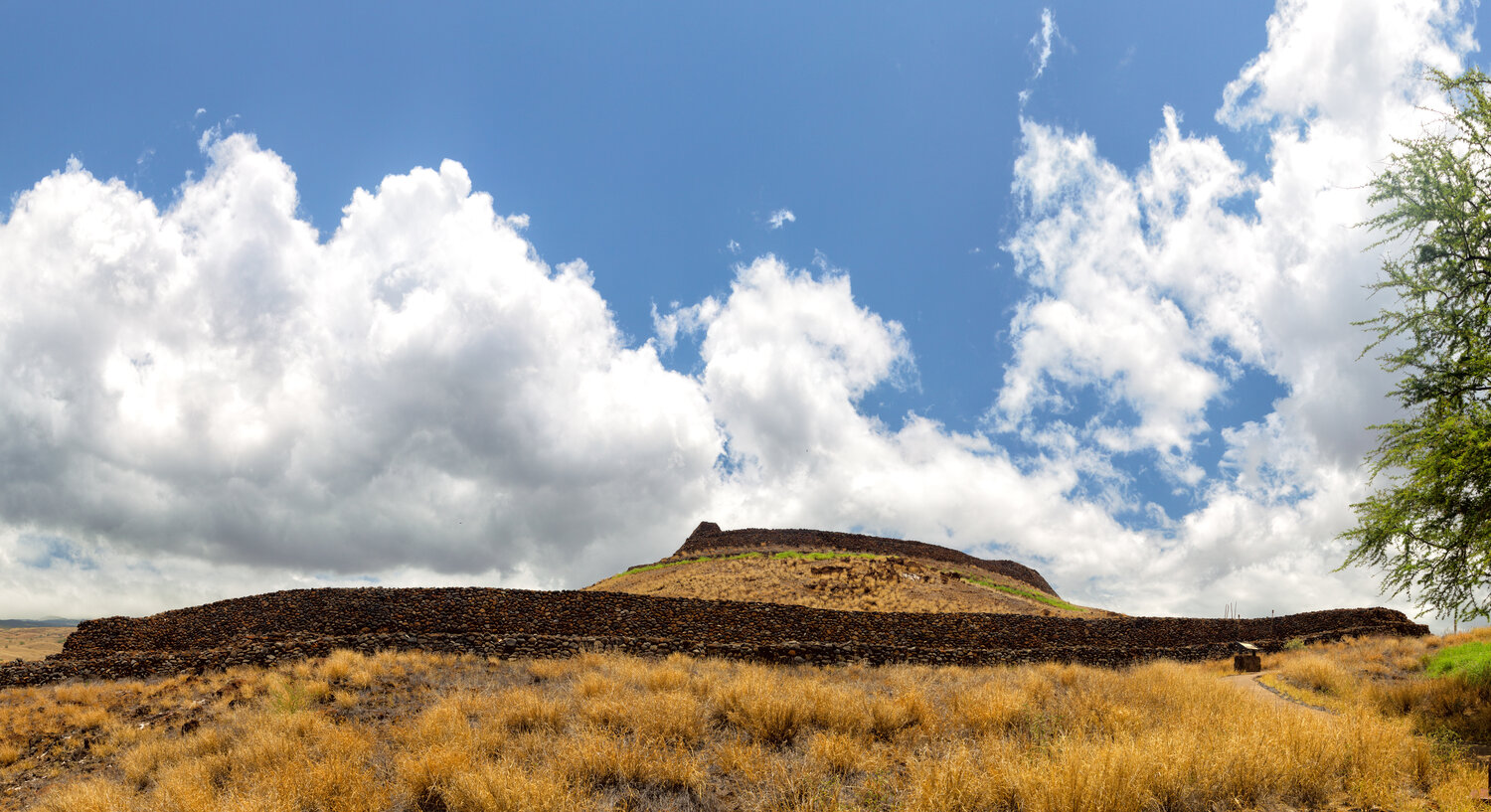 The last ancient Hawaiian temple to be built, Pu’ukohola Heiau was built by King Kamehameha I between 1790 and 1791 to gain favor with Kūkaʻilimoku (Kū), the god of war. The temple was constructed by hand and used stones from Pololū Valley that were transported by a human chain. If you visit Pololū Valley, (highly recommended), you will appreciate how great a feat this was! This is a sacred site and you are not permitted to enter or touch the Heiau. 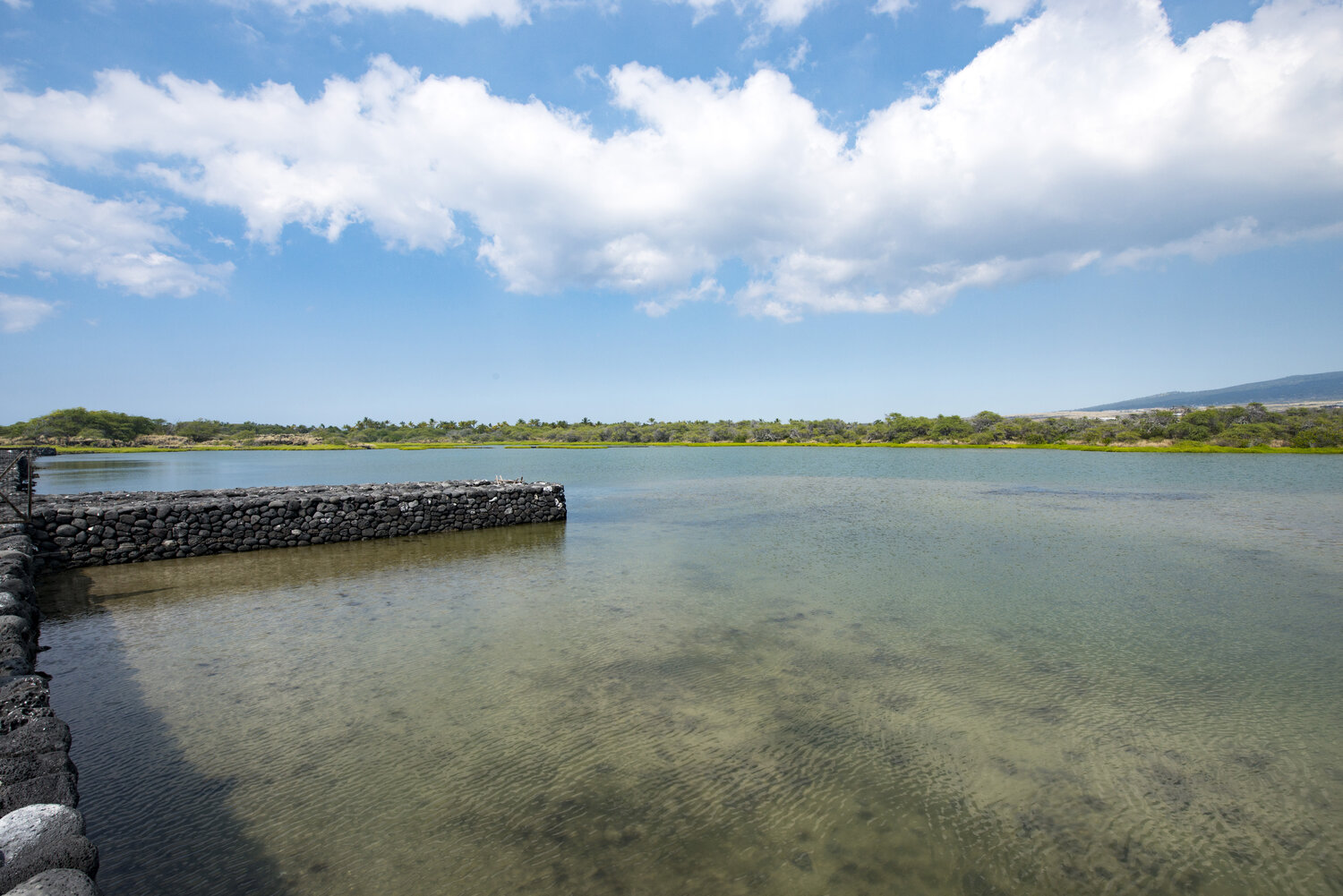 Located north of Kailua-Kona next to the Honokōhau Harbor, this beachfront park is set on the grounds of what was once an ancient Hawaiian settlement – the Honokōhau Settlement. There is a Heiau on the south side of the beach, a reconstructed thatch-roofed Hālau, and several historic fishponds and traps built by hand.

Fishponds constructed using dry rock masonry were used to trap fish and raise them for food, helping to prevent ocean overfishing. They are one of the great engineering feats of Hawaiians. The remains of the ‘Ai’opio Fishtrap can be seen directly south of the Hālau. You can hike north along the coast to reach the Kaloko Fishpond and Aimakapa Fishpond. 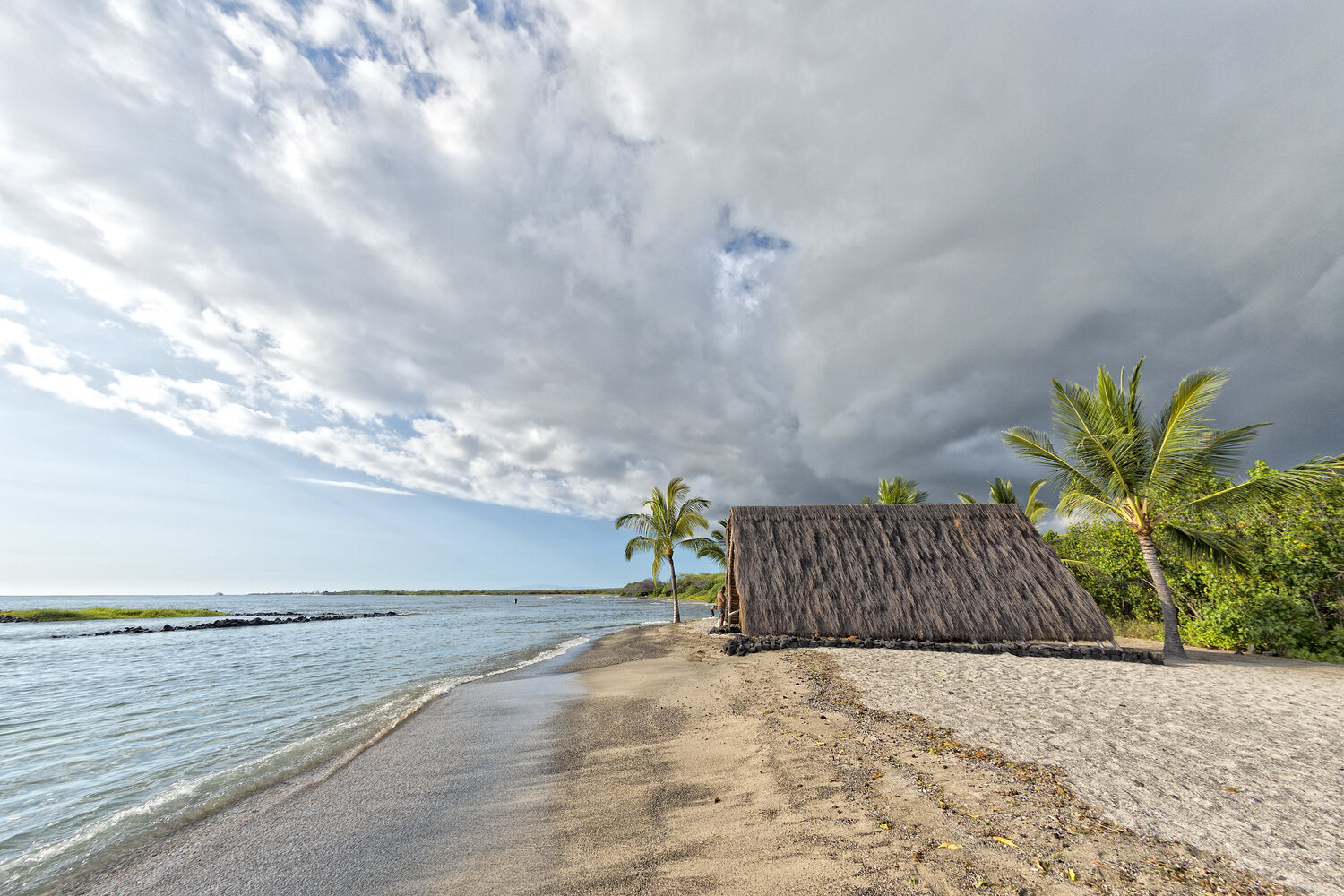 The coastal trail is part of the Ala Kahakai Trail, a 175-mile corridor that networks a number of culturally and historically significant places around the Big Island. It traverses through hundreds of ancient Hawaiian settlement sites and over 200 ahupua’a (traditional sea to mountain land divisions). Talk about walking in history’s footsteps!

The park and visitor center can be accessed off Queen Ka’ahumanu Highway, or (our preference) by turning onto the entrance road for the Honokohau Harbor and baring right. Park near the Sailing Club all the way at the back of the parking lot (you’ll see dry-docked sailboats) There is a trailhead on the right-hand side that takes you straight to the beach and the Hālau. Turtles can often be spotted resting onshore here. This is a lovely beach for swimming and relaxing as well.

Built by New England missionaries Sarah and David Lyman in 1839, the Lyman House and museum offer an interesting look into Hawaii’s past. According to the museum website – The Lyman Museum building, next door to the Mission House, was constructed in 1971 and houses a superb collection of artifacts and natural history exhibits as well as special exhibitions, archives, and a gift shop. Visitors touring the two facilities can see the old Mission House and life as it was 150 years ago, as well as immersive exhibits on many aspects of Hawaiian natural history and culture…a rare and well-rounded view of the real Hawai`i. Hours are 10:00 am – 4:30 pm daily, Monday through Saturday. Admission is $10 adults / $8 HI residents.

Hawaii Nightlife: Best Places On The Island To Get Tipsy On The Refreshing Tiki Cocktails