While the entire country is dotted with castles and plenty of magical landscapes, to really experience the true royalty of Germany, a trip to Bavaria is a must. Think storybook castles, overlooking the cobblestoned streets of the villages below, so beautiful that you’ll think you’ve jumped right out of the pages of your favourite childhood fairytales.

While there are hundreds of historic castles that decorate the Bavarian countryside, we’ve managed to narrow down to a list of the top 7 stunning Bavarian castles that can’t be missed on your next trip to Germany! 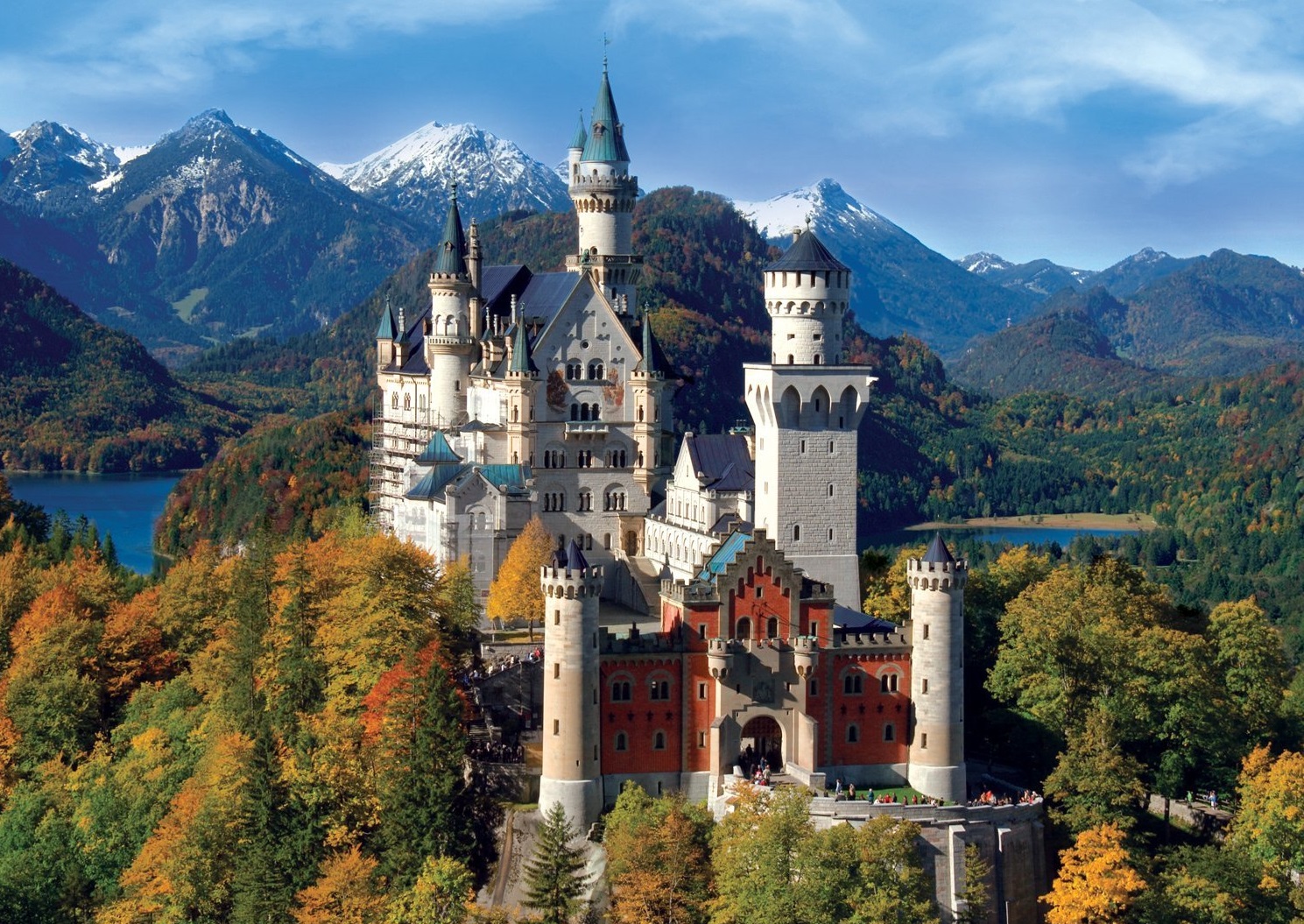 Re-live all of your Disney-inspired childhood fantasies at Neuschwanstein Castle. Perched atop a rugged hill in southwest Bavaria, this castle was the dream of King Ludwig II, who almost sent the entire country into bankruptcy trying to build the castle.

Upon first sight of what has been nicknamed the most beautiful castle in the world, you’ll immediately understand why it is also the most visited castle in the world. Oozing with fairytale romance, Neuschwanstein Castle is said to be the inspiration for Walt Disney’s Sleeping Beauty castle.

While the exterior of the castle, set against a majestic Bavarian Alps backdrop might have your jaw permanently struck open in awe, you can also step inside on a tour… just expect to be continually bowled over by the castle’s beauty. The interiors remain decorated with original furniture dating back to the 19th century, as well as extravagant ornamentation.

You can visit Schloss Neuschwanstein – the most beautiful Bavarian castle – on Trafalgar’s ‘Best of Germany’ tour, where you’ll tread in the footsteps of the shy King Ludwig II, as well as discover the magical Black Forest countryside that surrounds his fantastical retreat. 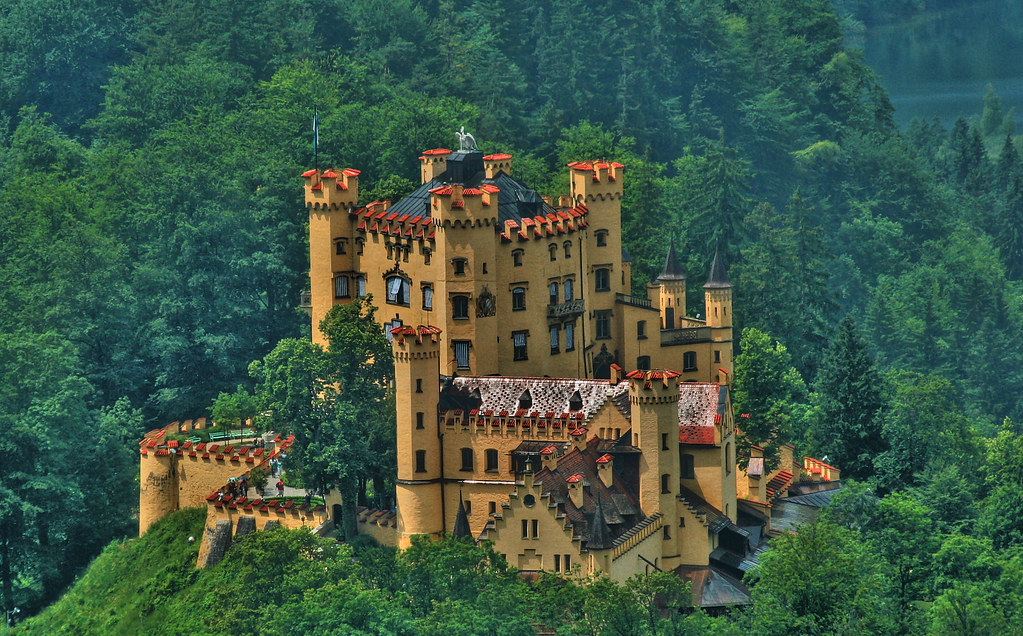 Despite being overshadowed by its uber glamorous neighbour, Neuschwanstein, a visit to the quaint 19th-century palace, Hohenschwangau Castle should not be missed!

Situated on a hilltop beneath Neuschwanstein, Hohenschwangau Castle was built by King Ludwig II’s father, King Maximilian II of Bavaria. While Neuschwanstein Castle was never used, Hoheschwangau was inhabited and was actually the childhood home of Ludwig II.

Just like it’s bigger neighbour, you can also visit Hohenschwangau and tour inside the castle, as well as wander through the impressive castle grounds that offer beautiful views of the village below. 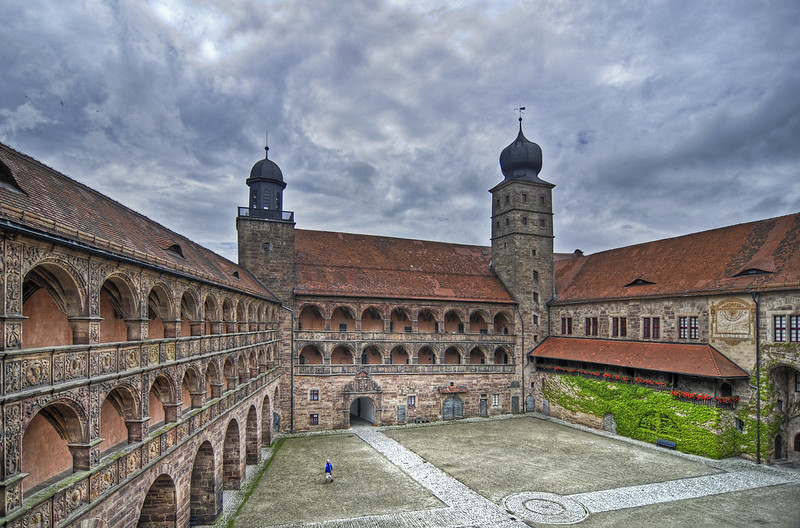 Located in the city of Kulmbach and perched high above the streets below is Plassenburg Castle, one of the best Bavarian castles and by far, one of the most impressive castles in Germany.

The castle was first mentioned in 1135, and has become well known and popular for its extensive collection of more than 300,000 tin soldiers and figurines, which are all set up in historic battle scenes that date back from prehistory to the 20th century.

Similar to most of the Bavarian castles that decorate southern Germany, Plassenburg Castle also has extraordinary views of the city below that can be enjoyed from the castle walls. 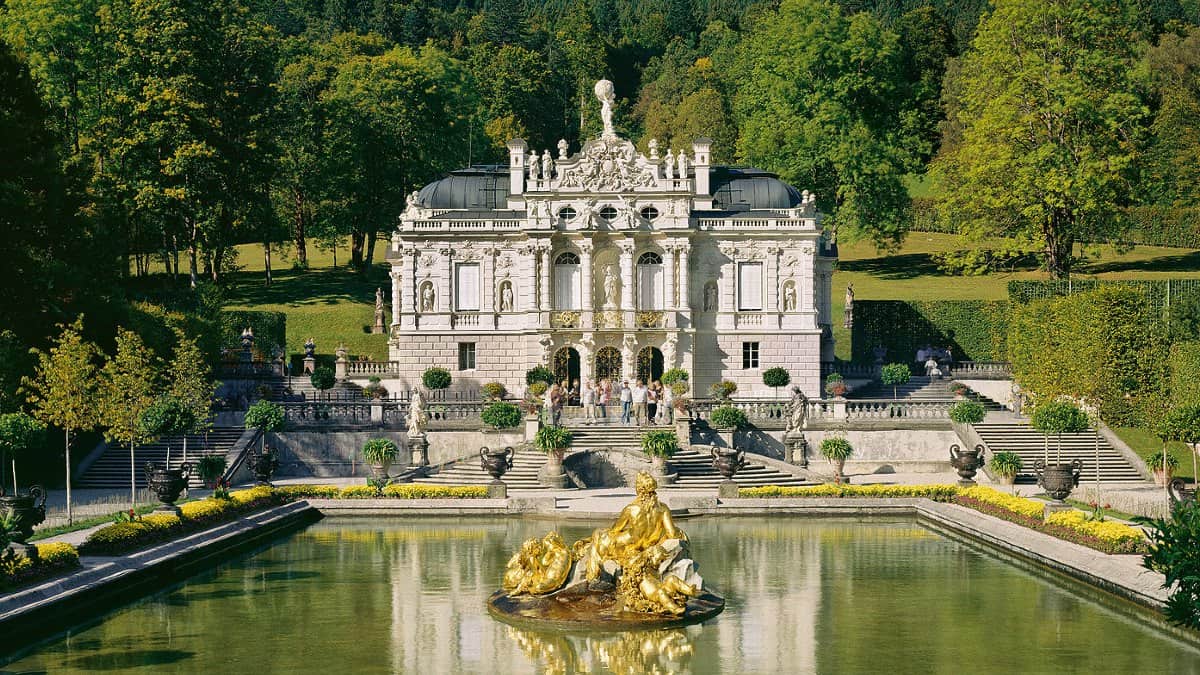 Situated in southwest Bavaria near the village of Ettal is Linderhof Palace, the smallest of three palaces built by King Ludwig II and the only castle that he actually lived to see completed.

Nicknamed ‘Little Versailles’, the architecture of Linderhof Palace is said to be heavily influenced by the French castles of the 19th century.

Upon embarking on a tour of the palace you can enjoy the Rococo interiors, which feature numerous pieces of opulent furniture, furnishings and embellishments. Also, be sure not to skip a tour of the palace gardens, which come scattered with beautiful water fountains and symmetric lawns.

Once a gothic masterpiece, the ruins of Heidelberg Castle, which sit atop a rocky outcrop above the now-University town of Heidelberg, encountered some turbulent times since the castle’s conception.

The earliest structure was built in the early 14th century, however, was burned by the French army in 1689. Then, following reconstruction, the castle was struck by lightning three times during the mid-18th century and further demolished in the 18th century as the red bricks were used to build new houses in the town.

Unlike many other German castles, Heidelberg Castle never regained its original glory, and still to this day remains in partial ruin. However, these ruins are amongst the most important Renaissance structures in the country, highlighting different periods of German architecture.

You can visit Heidelberg Castle on Trafalgar’s ‘Best of Germany’ tour, where you’ll spend time wandering around the Baroque-style Old Town of Heidelberg, with its bustling market squares and colourful facades – the perfect destination for a spot of last minute shopping! 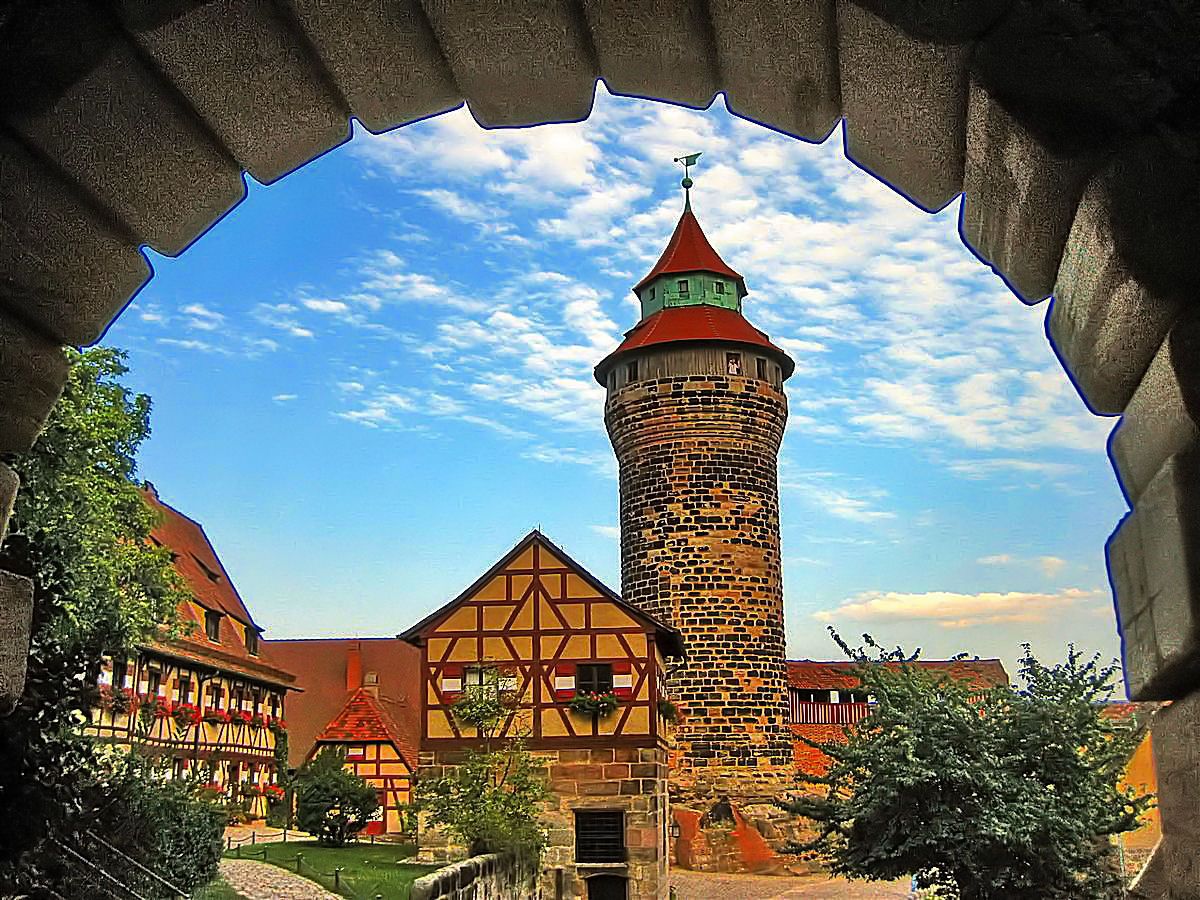 Whilst not as opulent as some of the other castles that dot the Bavarian landscape, Nuremberg Castle more than makes up for that in history.

Made up of a group of medieval fortified buildings that loom over the old town of Nuremberg, the castle is considered one of Europe’s most fierce medieval fortifications.

Dating back to the early 1000’s, the city of Nuremberg has been considered one of the most important cities in the region throughout several periods in history. Most notable of which was during the Holy Roman Empire, where each Emperor resided in the castle during their reign, earning the castle the title of the Imperial Castle.

Fast Forward to today, post several restoration works following severe bombings during World War II, Nuremberg Castle consists of three main sections. The most historically significant is the ‘Kaiserburg’, with the remainder of the castle now being used for municipal buildings, including a youth hostel…a chance to sleep in a Bavarian castle! 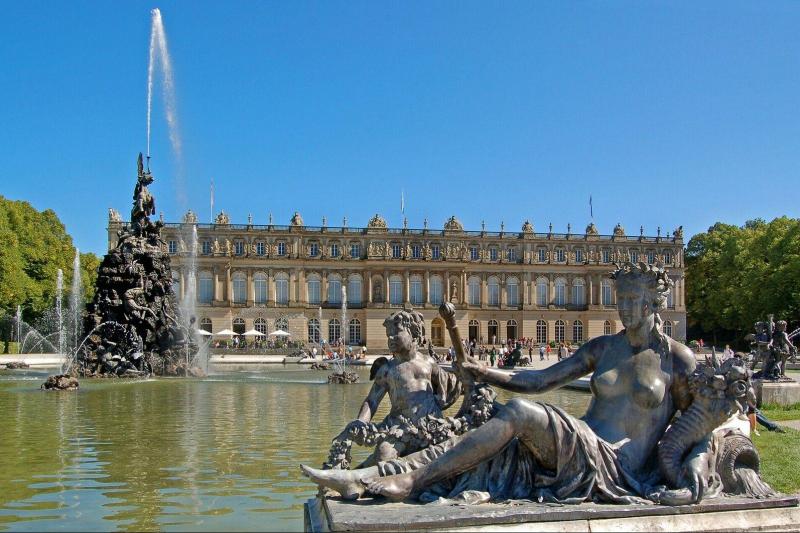 Located about 60km southeast of Munich is the lavish Herrenchiemsee Castle; the product of King Ludwig II’s wish to have his own version of the Versailles Palace in Germany.

While its location standing on an island in Lake Chiemsee is pretty incredible (the Palace is only accessible by boat), there is little that can prepare you for the beauty and splendor of the opulent castle interiors. Decorated with sparkling golden decor, a porcelain collection, endless artworks and sprawling gardens that are to die for, visiting this beautiful Bavarian castle will transport you to a world you’d only imagined existed within the pages of fairy tales.

While visiting the Palace, which is also known as one of the most picturesque Bavarian castles, it’s also worth exploring the island, which is home to the historical Augustinian Monastery, which houses a museum and two art galleries, as well as beautiful parklands.

7 Naturalscapes To Escape In Germany