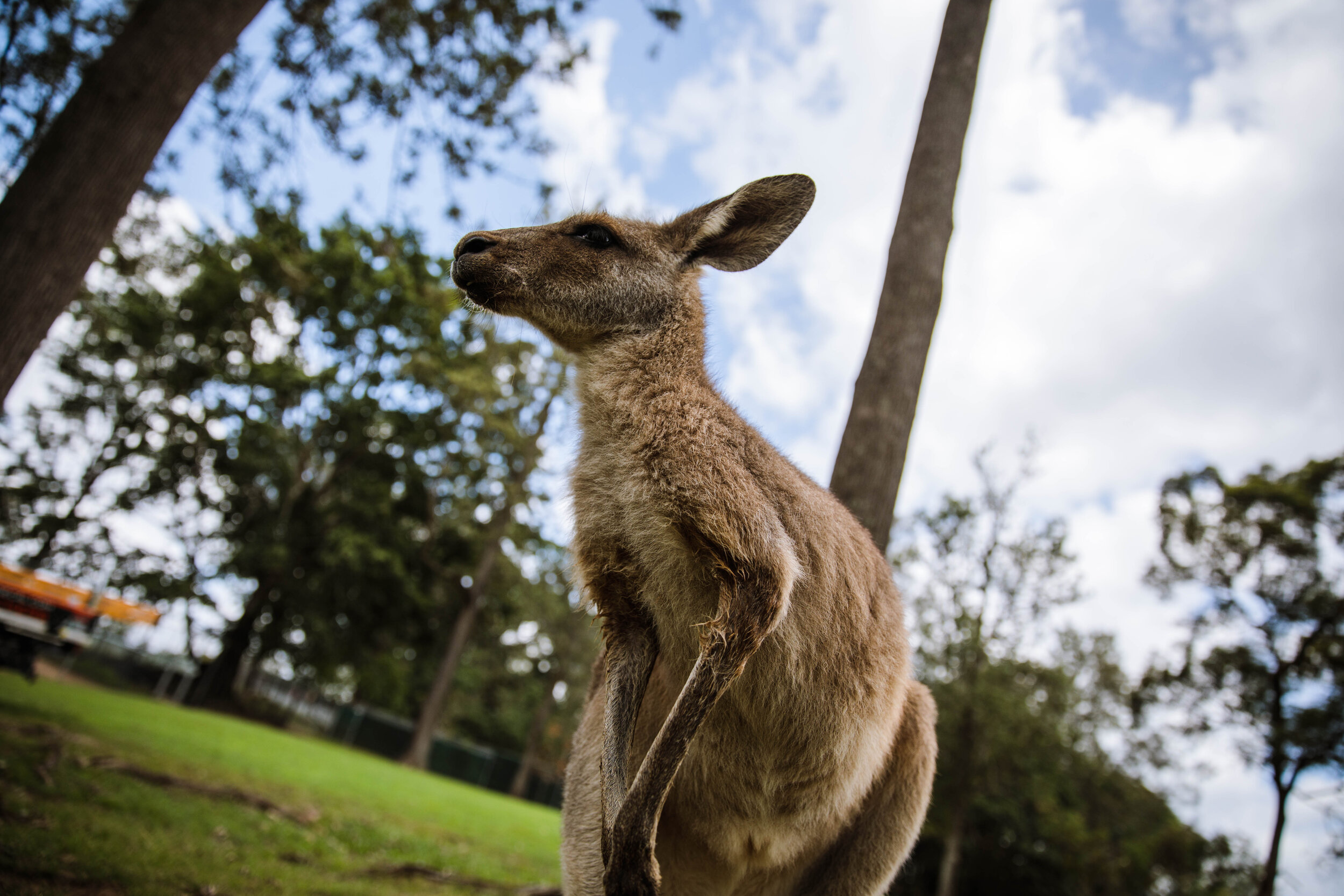 A comfortable hopping speed of a kangaroo is around 21-26km per hour, however they can move up to 71km per hour over shorter distances. That’s faster than a racehorse!

Kangaroos use their large feet and powerful hind legs to jump up to 9 metres long in one single leap! They have small front legs and a long strong muscular tail, which helps them balance while jumping. 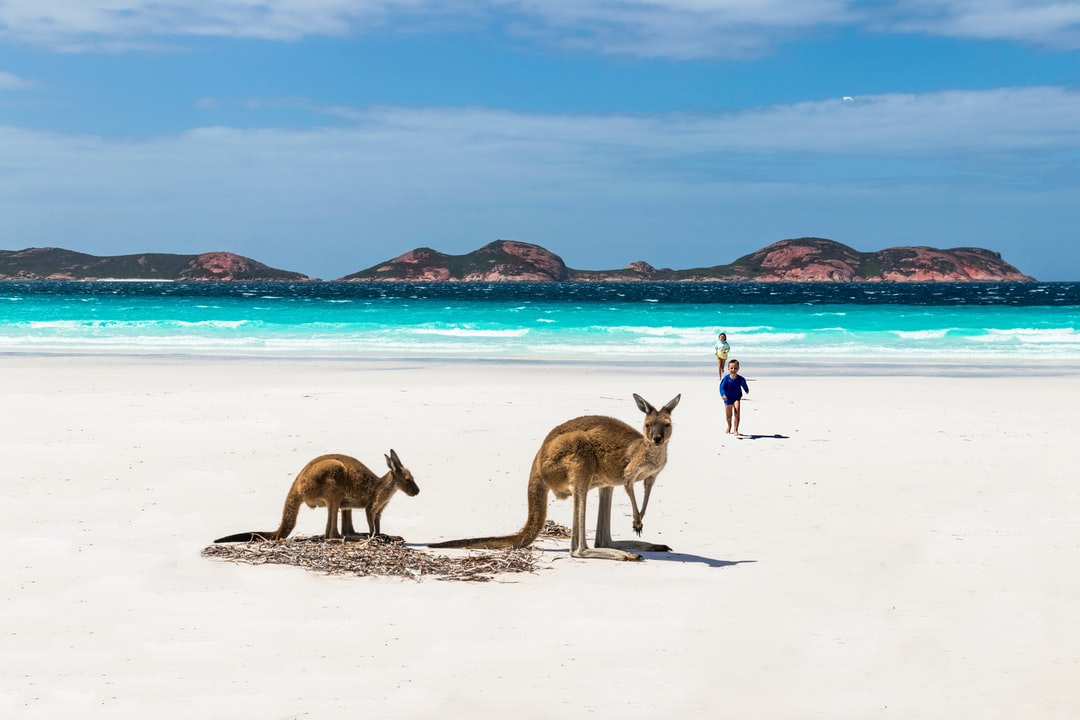 Kangaroos can swim and normally do so to cross rivers or defend themselves and avoid predators. They keep their heads above the water to breathe and paddle with their legs, which move independently in the water. They use their tail to propel through the water and can even use their front paws to drown pursuers.

Kangaroos also have excellent hearing and can swivel their ears in all directions to pick up sounds. They have good eyesight but only respond to moving objects. Kangaroos like to chew on grasses, herbs and shrubs. Because of their grazing habits, kangaroos have developed special teeth. Their incisors (front teeth) can chop grass close to the ground, while their molars chop and grind the grass.

Kangaroos need very little water to survive and are capable of going for months without drinking at all. Kangaroos normally rest in the shade during the day and come out late in the afternoon or evening to eat when it is cooler. Kangaroos are a popular Australian animal. They are so important that they feature on the Australian coat of Arms, postage stamps and even our 50 cent and $1 coins.

They are also used by some of our well-known organisations including Qantas and the Royal Australian Air Force.

5. Kangaroos have many names 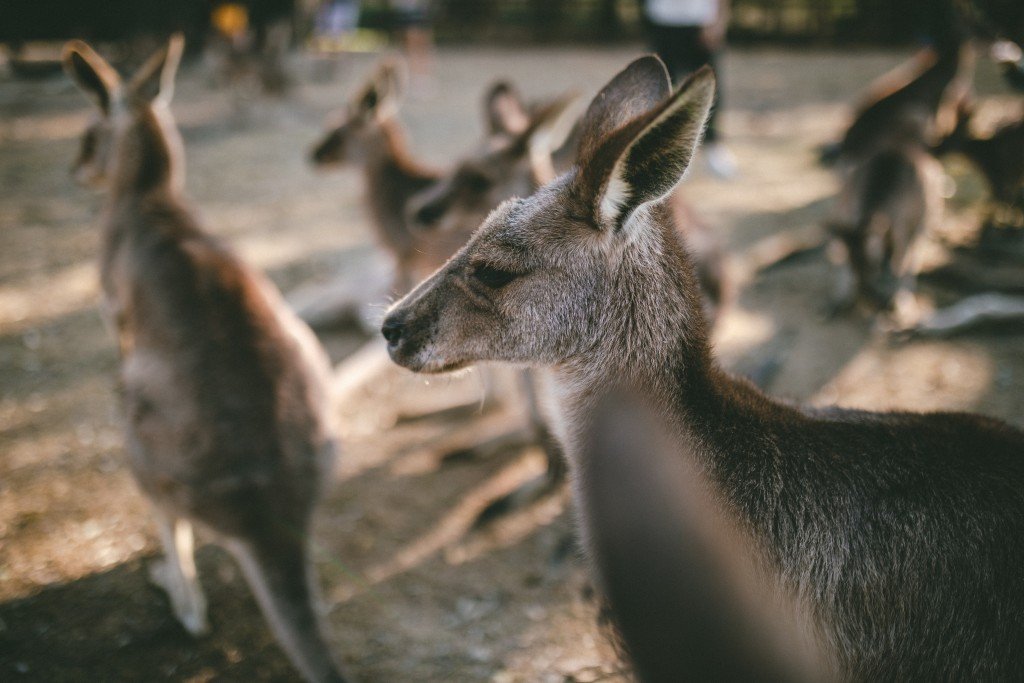 There are four different types of kangaroo species including the Red, Eastern Grey, Western Grey and Antilopine kangaroo.

A group of kangaroos is called a mob, troop or court.

A newborn joey is only about 2.5cm long, that’s about the size of a grape! Once born, they travel through their mother’s thick fur to the safety of the pouch.

After a few months its eyes open and it’s able to look out of the pouch at the world around their mother. After several months the youngster emerges from the pouch for short trips and to nibble on some grass. By the time the joey is about 8 months old it is able to leave the pouch and stand on its own.

Males will often fight each other for dominance or win a mate. Balancing on their tail, they lean back and punch and kick out, trying to knock their opponent off balance. They sometimes wrestle too. Big claws on their feet and huge muscles in their legs ensure that the kick is painful and damaging. Male kangaroos have thickened skin around their bellies to protect themselves from these powerful kicks.

Male kangaroos learn to fight by training when they are young. At first with their mum and later with other young males.