With ocean vistas and a backdrop of mountains behind skyscrapers, the city of Vancouver on Canada’s west coast is stunningly beautiful. Vancouver is not a budget destination, but fortunately, there are a number of free things to do, many of which feature those magnificent views.

Although Stanley Park is located just minutes from downtown Vancouver, its forested walks feel miles away from the city, offering a quiet refuge as you walk among centuries-old Western red cedars, Western hemlocks, moss-covered bigleaf maples, and towering Douglas firs.

You may want to hunt for the oldest trees, known as “monument trees.” The Hollow Tree, the remaining stump of a 700 to 800-year-old Western red cedar, is one of the park’s most well-known landmarks and a popular spot for photographs with visitors posing inside its cavity. Gardens in the park feature rhododendrons, roses, and an arboretum that pays homage to William Shakespeare. Surrounded on three sides by water, the 1001-acre park has swimming beaches and seawall coastal paths. The area was originally home to Burrard, Musqueam, and Squamish First Nations people. Nine totem poles at Brockton Point in the park recognize that history and are a popular attraction. The Point is also home to the Brockton Point Lighthouse, built-in 1914, and views of Burrard Inlet and Lions Gate Bridge. Other landmarks in the park include Siwash Rock, a 32 million-year-old rock outcropping. Monuments and sculptures throughout the park commemorate people and events in history. Maps on the Stanley Park website can help you design your own self-guided tour of the park.

2. Walk, Jog, or Cycle the Seawall 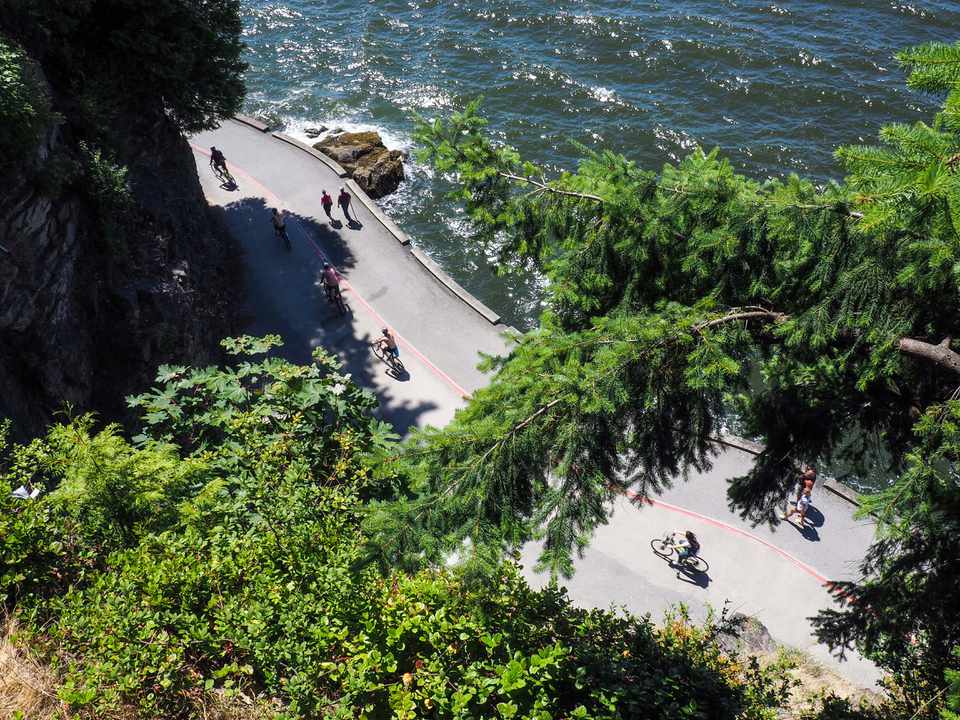 Following the Vancouver Seawall around the city’s waterfront is one of the best ways to see Vancouver. The 17.5 miles (28 kilometers) paved pathway offers views of the mountains, sandy beaches, rocky shores dotted with driftwood, and Vancouver’s impressive downtown skyline. The mostly flat path runs along the perimeter of Stanley Park and through popular tourist areas, including English Bay, Olympic Village, Granville Island, and Kitsilano Beach. The wide pathway is divided into two sections: one for walkers and joggers and another for cyclists and inline skaters. Follow the signs to stay on the correct side of the path.

Gastown, Vancouver’s oldest neighborhood, dates to the 1860s. Today, Victorian buildings along cobblestone streets house trendy restaurants and bars as well as galleries and boutiques that make for fun browsing. Gain a glimpse into the city’s history as you stop to read the plaques on the heritage buildings in this National Historic Site. A statue of Gassy Jack Deighton, the man who started the area when he opened a saloon in 1867, sits at the end of Water Street. It’s said he received the nickname of “Gassy Jack” because of his tall tales and incessant talking.

The steam clock on Water Street is a popular Gastown attraction and a favorite spot for photographs. Although it looks antique, the clock is relatively new. It was built in 1977. Every quarter-hour the steam-powered clock sounds the Westminster chimes.

4. Picnic and Play on Kitslano Beach 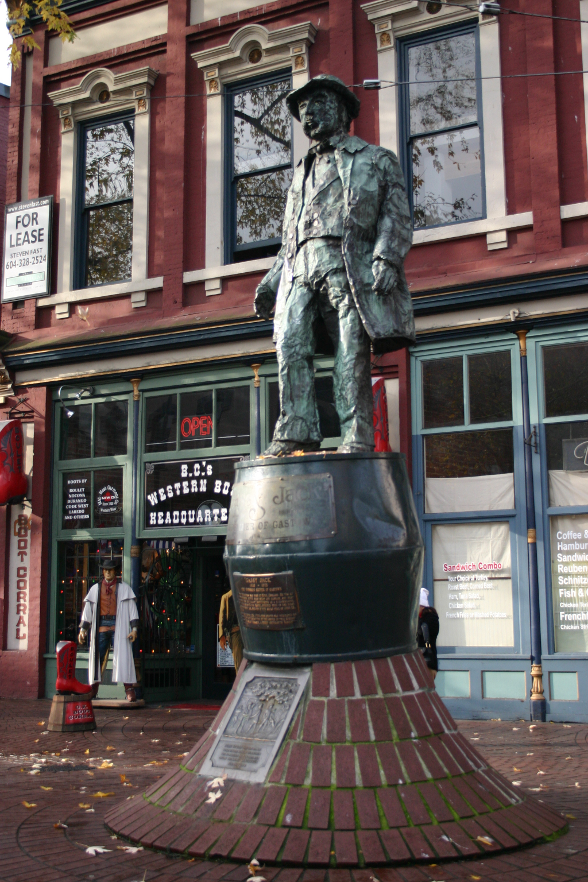 Facing onto English Bay, Kitsilano Beach is one of the most popular beaches in Vancouver. Kits Beach, as it is known to the locals, has a long stretch of sandy beach where you can rest, read or play beach volleyball and grass patches above the tide line where you can throw a Frisbee or spread out a picnic lunch.

You’ll find public art throughout Vancouver: in parks and public spaces, on street corners, in transit shelters, on walls and fences, and in community gardens. The most famous installations include Douglas Coupland’s Digital Orca sculpture near the cruise ship terminal, Myfanwy MacLeod’s 18-foot The Birds at Olympic Village plaza, and The Inukshuk in English Bay. But there are many other pieces.

The city’s public art program and the non-profit Vancouver Biennale organization regularly sponsor new works. The Vancouver Mural Festival runs from late June to mid-August and each year features approximately 50 new murals in the Mount Pleasant and False Creek Flats neighborhoods. The websites of all three organizations contain maps to help you hunt for the art.

A former industrial site, Granville Island today is a hub for cultural activity, artisans, food lovers, and shoppers in search of the unique. It is no longer an island. In 1950, when more space was needed for the warehouses, mills and factories on this man-made island, the back channel in False Creek was filled in. 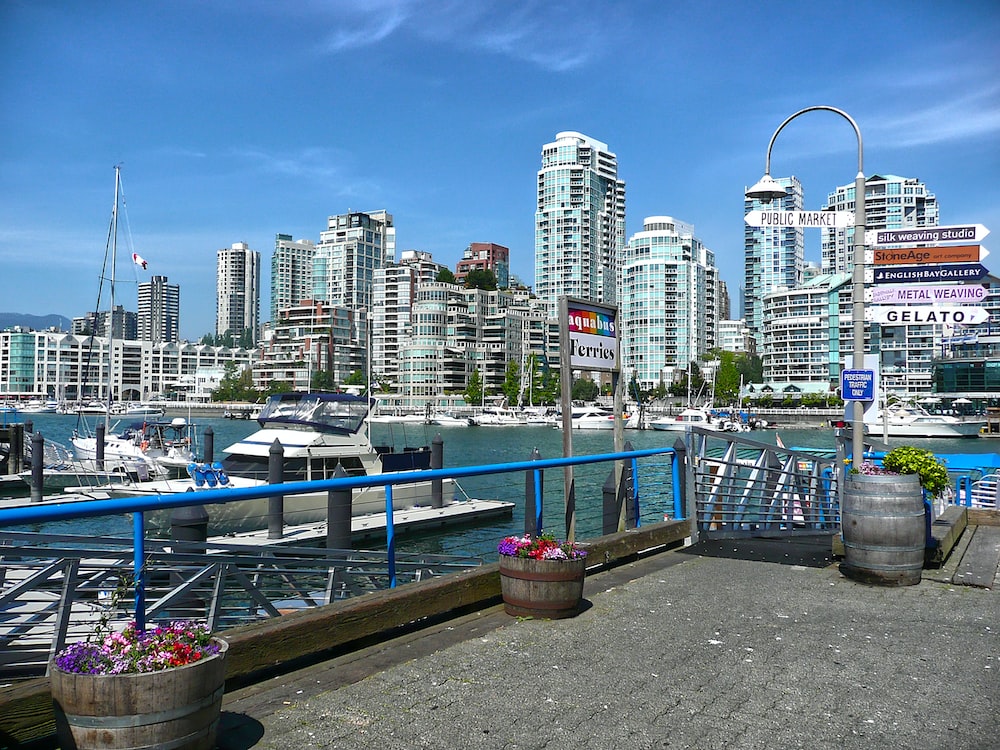 Today, remodeled warehouses house craftsmen and artists. You can talk to artists and see them at work. Stalls and shops inside the indoor Public Market are overflowing with a wide variety of food, produce and handcrafted products. In other spaces on the island, you’ll find galleries, unique boutiques, and a variety of restaurants. Street entertainers can be found in various locations on the island.

If you haven’t yet tired of Vancouver’s spectacular skyline, you can enjoy more views from the Island’s boardwalk.

The views themselves are almost worth the whole trip to Vancouver, the jewel of Canada’s West coast. And when you’re done with the city, it may not be a bad idea to drive into the Rocky Mountains themselves. You’re not too far from Whistler, another of Canada’s most famous places.

6 Most beautiful regions of Canada