Desolation Sound is a Pacific North West hidden jewel for boaters. Located 95 miles north of Vancouver, British Columbia past the Sunshine Coast, and at the tip of the Strait of Georgia, the area’s deepwater coves and mountainous fjords are a magical backdrop for sail and motorboaters as well as kayakers. Minimal tidal exchange in the sound contributes to exceptionally warm ocean waters, and the numerous freshwater lakes ashore, some with tropical-like white sand and aqua blue water, simply add to the attraction. 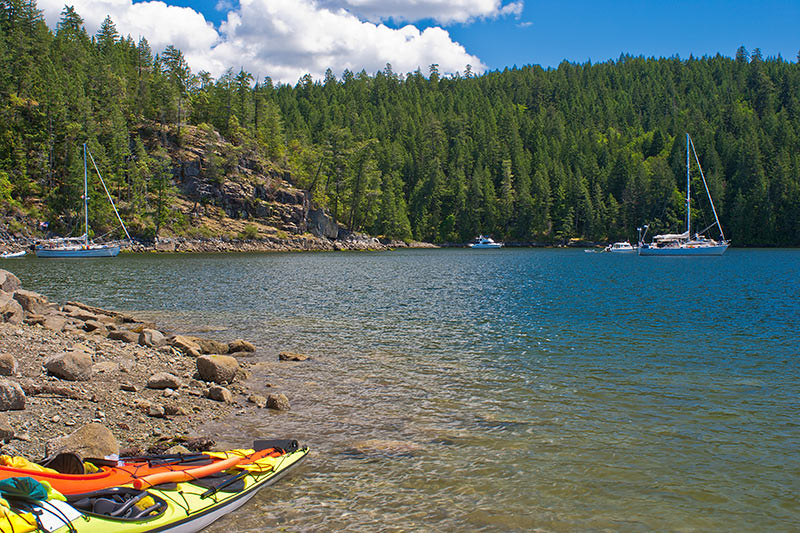 Our group of seven chose to spend one magical week aboard a 45-foot Bavaria yacht. When the pandemic threatened international travel in 2020 and shut down the Canada-U.S. border, we were forced to recreate closer to home. But calling beautiful British Columbia home, and with a past history of chartering sailboats, we were able to take advantage of a last-minute cancelation, courtesy of an American party unable to cross the border. Scoring the premier yacht in the charter fleet for our week in early August was a bonus.

Savary Island, just short of the entrance to Desolation Sound, looks to have been plucked from the tropics rather than the wilderness of Canada. It is a popular afternoon anchorage for an ocean swim or row to the sandy shore.

Whether you want to fulfill a high seas fantasy at the helm of a sailboat or prefer to experience the magic of being at sea with a hired skipper, there are ways to access this ultimate cruising area without owning a boat — and amazing experiences to be had while you’re in the area.

Will it be a bareboat charter or hired skipper? The answer depends on your experience. Charter companies will require a resume of boating and sailing experience, including coastal navigation and marine radio certification. Be prepared to document proof of competence, complete a navigation quiz, and demonstrate your abilities during an on-the-water boat check-out prior to departure. Having a crew with boating experience onboard is preferred for yachts greater than 40 feet. You can also hire a certified skipper for the entire charter. Additional fees will apply. Most skippers are fun-loving and amicable with holiday groups. Note that you will need to accommodate their sleeping arrangements.

There are numerous must-see destinations in Desolation Sound. This is far from an exhaustive list, but it’s a great place to start.

British explorer Captain George Vancouver first visited Teakerne Arm in 1792 while mapping the area. At the time, he was less than impressed with the remoteness of the area, which now seems laughable as people savor the seclusion and soaring peaks rising from deep fjords, particularly striking within Teakerne Arm. For those who enjoy hiking and swimming, no visit is complete without trekking to and swimming in Cassel Lake above the cliff, and then frolicking in the cascading waterfall below.

Prideaux Haven is undoubtedly one of the most scenic anchorages in Desolation Sound. This well-protected harbor has enough arms and interconnecting caves and passageways to accommodate many boats and still offer space while presenting endless corners for kayaking or exploring by dinghy or SUP.

Roscoe Bay is restricted by tides, but visiting by dinghy or timing it as an overnight stay will give you access to Black Lake, and a short hike to bare rocks ideal for sunbathing or diving into the warm, freshwater.

Refuge Cove on Cortes Island is the major supply center for yachts visiting Desolation Sound. Fuel, water, and provisions make it a popular stop. The General Store is also a great place to secure a copy of The Curve of Time by M. Wylie Blanchet – the true story of a young widowed mother cruising coastal British Columbia with her five young children in a 25-foot sailboat during the summer of 1926. Reading the book as you explore the same waters is an immersive experience.

While good winds are likely to make sailing from Comox to Desolation Sound and back exciting, light winds within the Sound are likely, making fishing, prawning, kayaking, swimming, hiking, stand-up paddleboarding, whale watching, and oyster and mussel harvesting all viable activities. Provided you have secured a fishing license and there are no shellfish warnings, a dinner from the sea to reward your efforts is absolutely possible! So is whale watching. We spotted several orcas rounding Spitsbury Point as we approached Cortes Island.

The setting sun at anchor is a daily reward, but a full moon reflecting over the water at night is a bonus for those who plan their charter with the lunar cycle in mind.

Half the fun of cruising is the company you share it with! Our crew was game for adventure and took theme nights seriously, allowing for Mexican, Hawaiian, Italian, Western, and Pirate Night to dictate not only food and drinks but also attire. We kicked it off with the pirate theme our first evening in Cortes Bay, complete with sabering several bottles of champagne!

5. Experiencing The Sound In Season

July and August offer the warmest, most stable weather but can be busy with the summer holidays. September, a fringe alternative, offers quieter anchorages and lakes still warmed from the heat of the summer. Since wildfires have plagued British Columbia, Washington, Oregon, and Canada the last couple of summers, the possibility of smoke as a threat is a consideration. Typically, August is more susceptible.

6. Get Excited About Your Itinerary

There are many ways to enjoy Desolation Sound. This was our route:

Day 7: Henry Bay and return to Comox Harbor, 1 hour in the morning

All charter boats are equipped with PFDs (personal floatation devices). Being on the water, even in the hot summer, can be cool, as can mornings and evenings. It’s best to pack something warm. Bring rain gear with the hope of never needing it. Charters come with basic linens and towels, but having a few extras for fresh and saltwater swimming is nice.

The Desolation Sound cruising guide by Peter Vassilopoulos is a great resource for not only planning but also interpreting the history of the area. The Dreamspeaker Cruising Guide to Desolation Sound and the Discovery Islands is another respected resource. The Boaters Blue Pages and Marine Guide by Pacific Yachting are indispensable directories of marine services.

When it comes to picking an outfitter, we highly recommend Desolation Sound Yacht Charters out of Comox. All boats come with charts on board, and most newer yachts have electronic navigation, but if you want to mark up a chart and plot courses, you’re best to bring your own.

When sailing, non-greasy food, made easy to eat on the go, is key. But nothing beats fresh oysters shucked off the back of the boat or a fresh catch of salmon. Even if you’re not an angler, you can buy direct from fishing boats in Comox Harbor prior to departure. Boats typically have portable barbecues, cooktops with smaller ovens, and more limited refrigeration, so consider that when meal planning.

Bringing charging blocks for cell phones is a good backup to the yachts charging system, especially since you will be on anchor without shore power most nights. A fishing license is a must if you plan to harvest from the sea. Learn more on this Fisheries and Oceans of Canada page.

Ginger tea or sea sickness bands are good things to have on hand for the crew, and sunglasses, sunhat, and sunscreen are a must for the intense reflection off the water. Non-marking white-sole deck shoes will ensure you leave no trace, and frozen water in jugs to keep food cold turns into extra drinking water after it thaws rather than a sloppy mess from an ice block. Canned drinks are always better than bottles to avoid breakage.