With its flat land and close-together towns, the Netherlands is a real cycling nation. But there are more kinds of bicycles than the traditional model you are probably used to. Many special bicycle types are more popular in the Netherlands than in most other countries.

Once in a while, you will see an interesting contraption whizz by on the bicycle path, that can look like anything from an oversized cigar with a human head sticking out of it, to a set of bicycles that was taken apart and soldered together as one.

What kinds of bikes are there, and what sets them apart from the good old standard two-wheeler? Here are five special kinds of bicycle you might come across: 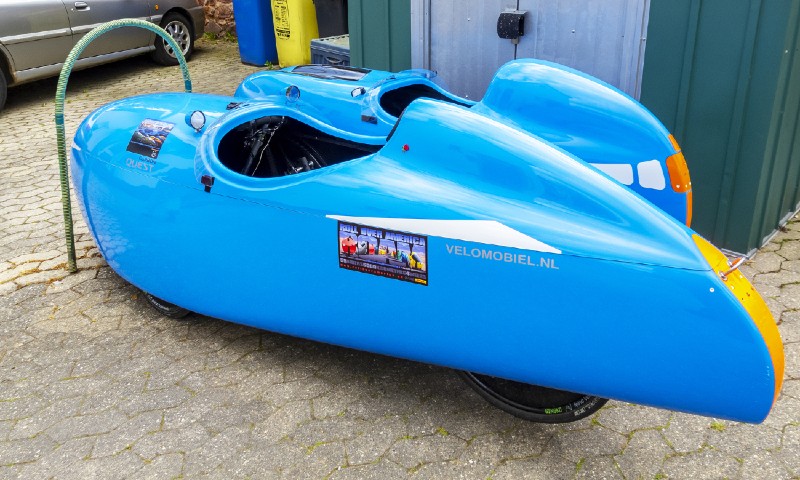 The recumbent bike lets the rider lie back, rather than sit upright while cycling. This way, their weight is distributed over a larger area of the body, which is ergonomically more comfortable on longer trips.

With enough training, this system also allows for faster propulsion as it is more aerodynamic. However, most people decide against getting one because purchase and upkeep are expensive. Also, you don’t have the freedom of movement and visibility of a normal bike, since you are stretched out and low to the ground.

There are various kinds of recumbents. One of the most curious ones you may see is the velomobile. This bike is encased by a shell with a smooth cigar-like shape, with an opening in the top for the cyclist. The basic inside model is often a trike, a three-wheeled recumbent.

On a more whimsical note, the shell of the velomobile is also a perfect surface for brightly coloured decorations and ads. 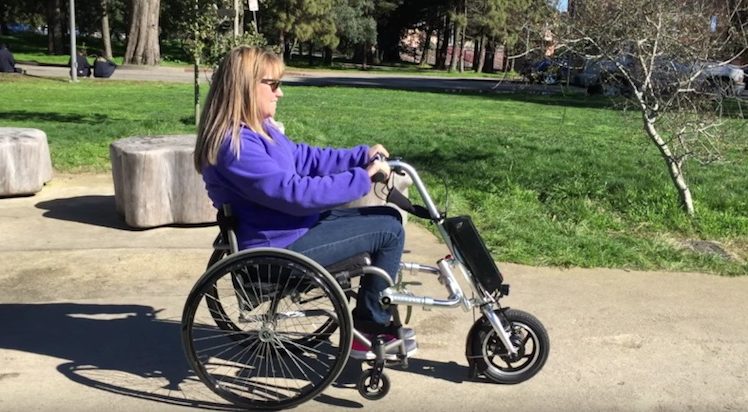 If one person in a travelling duo is physically unable to pedal, the wheelchair bike might be a solution. The front of the bicycle is a wheelchair or allows for a wheelchair to be attached, so the cyclist can wheel a person forward as much as they would on foot.

The wheelchair bike allows for the people riding it to interact socially, and it offers a way to negotiate a long distance in an environmentally friendly way.

The bike can also often get much closer to the entrance of the destination than a car, making it easier for two people to travel without help from others. 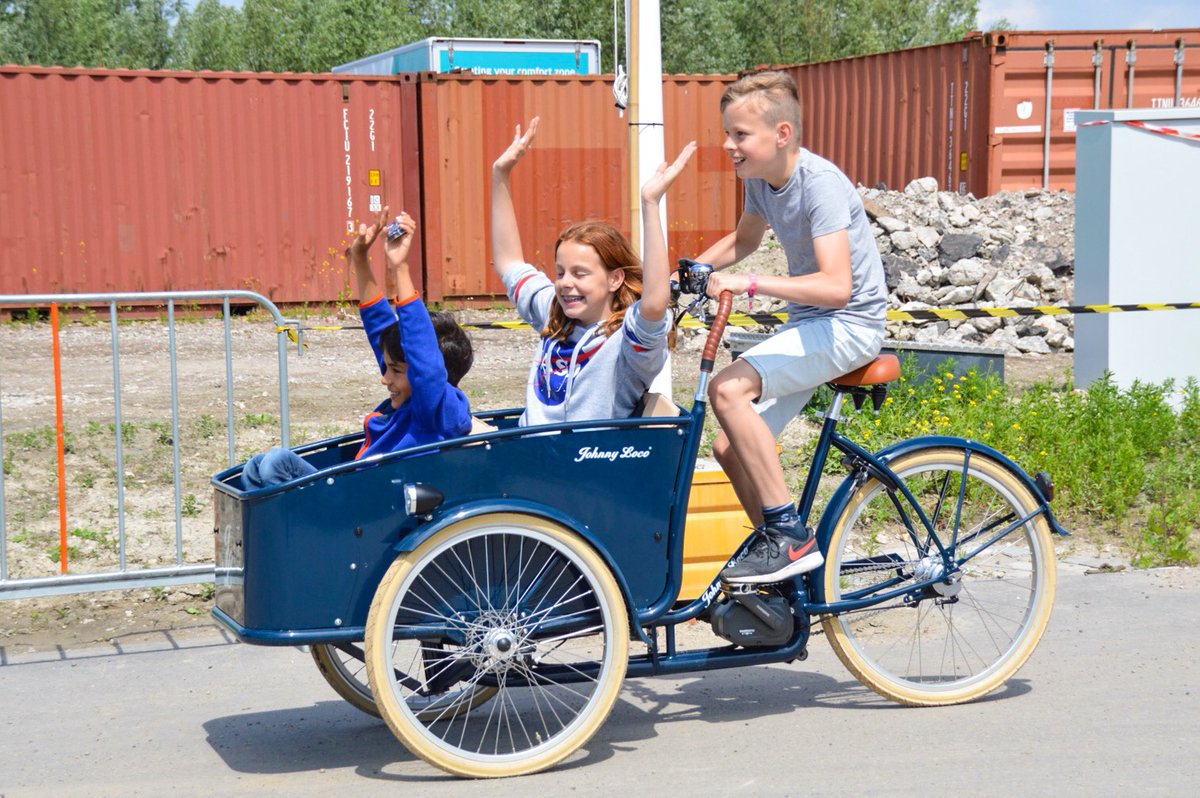 A cargo bike, also known as a freight bicycle (or bakfiets in Dutch), is a bicycle especially designed to transport cargo. It looks like a normal bike at the back, but its front has a large open case placed between the handlebars and the wheel.

The added surface allows for users to fill the case with cargo, and still mount and propel the bike with ease. It won’t easily topple over, and a special mechanism reduces the strain of the cargo’s weight while cycling.

The cargo bike used to be mainly for professional deliveries, for instance by bakers and grocers.

These days, the cargo bike is often used by young parents, as it allows for the easy transporting of groceries and young children for short distances, without a car.

The cargo bike is sometimes seen as a symbol of the ultimate middle-class lifestyle in the Netherlands. 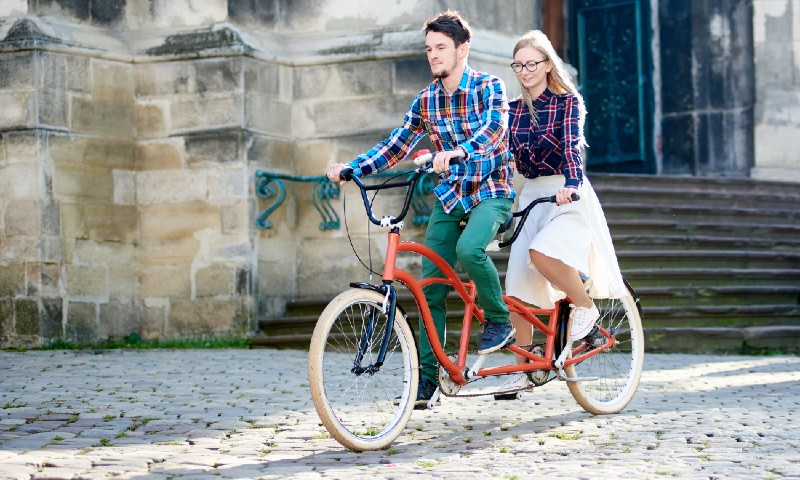 Tandem bikes are made to be driven by two people (and sometimes more), usually placed behind each other. The person in front is called the captain, while the person at the rear is called the stoker.

Originally, tandems were created by literally soldering two regular bike frames together. Today, the designs have been improved to allow for proper sturdiness in the construction’s longer frame.

The combined propulsion on a tandem bike makes it less taxing for two people to drive long distances together. Also, it lets people with differences in their stamina cycle together without one person falling behind.

The tandem is perfect for undertaking a cycling trip with someone who has trouble cycling independently, such as a person with a physical disability.

The duo bike, or side-by-side tandem, is even more reliable for riding together without having to worry about balance. The seats are next to each other, rather than behind each other, and the frame has three wheels. Many know the frustration of pedalling furiously uphill against the wind, and suddenly seeing another cyclist overtake them with apparent ease. This person might be riding an e-bike or electric bike.

The e-bike has a small motor that propels the bike, often in combination with the traditional pedalling. If the motor only functions as a support to one’s physical efforts, the e-bike can also be called a pedelec, as a combination of pedal and electric.

E-bikes are zero-emission vehicles and are more environmentally friendly than motorcycles or cars. They also allow senior citizens and other people who have trouble moving about to cycle while conserving force and stamina and minimising stress on the knee and hip joints.

The past few years have seen a huge surge in the sales of e-bikes in the Netherlands and Belgium, especially among younger people.

Although some special bicycles may be perfect for certain situations, the everyday traditional bicycle is undefeated in general popularity.

There are various types of normal bicycle as well, such as the manageable granny bike (omafiets), which is perfect for city use thanks to its strong frame and absence of fragile brake cables.

The Essential Guide to Madurodam, the Hague’s Mini Netherlands