Hogmanay is Scotland’s New Year’s celebration. But did you know that it’s a three to five day blast with a bunch of weird and wild, ancient traditions?

As Christmas festivities wind down all over the United Kingdom, the really spectacular Hogmanay parties in Scotland are just getting underway.

Why this big national party is called Hogmanay is anybody’s guess. The word itself has been around since at least 1604 when it first appeared in written records. But many of the traditions are much older.

Scotland.Org, the Scottish government’s online gateway to everything you ever wanted to know about visiting, working or living in Scotland, suggests it could be old Norman French from hoguinan (a New Year’s gift). Another French derivation could be Homme est né meaning man is born. But they also guess it’s a variation of the Gaelic og maidne (new morning), the Flemish hoog min dag (great love day) or, at a stretch, the Anglo Saxon haleg monath (holy month).

You get the picture. If even the Scots don’t know the origin of the word for one of their most flamboyant celebrations, we’re not likely to find out either. None of that, of course, affects the enormous public New Year’s events (the biggest and most famous in Edinburgh) that light up cities and towns all over the country.

And, alongside the celebrations, street festivals, entertainment and wild – occasionally terrifying – fire festivals, people still practice rituals and traditions that go back for hundreds – maybe thousands – of years. Here are five you may not have heard of before. 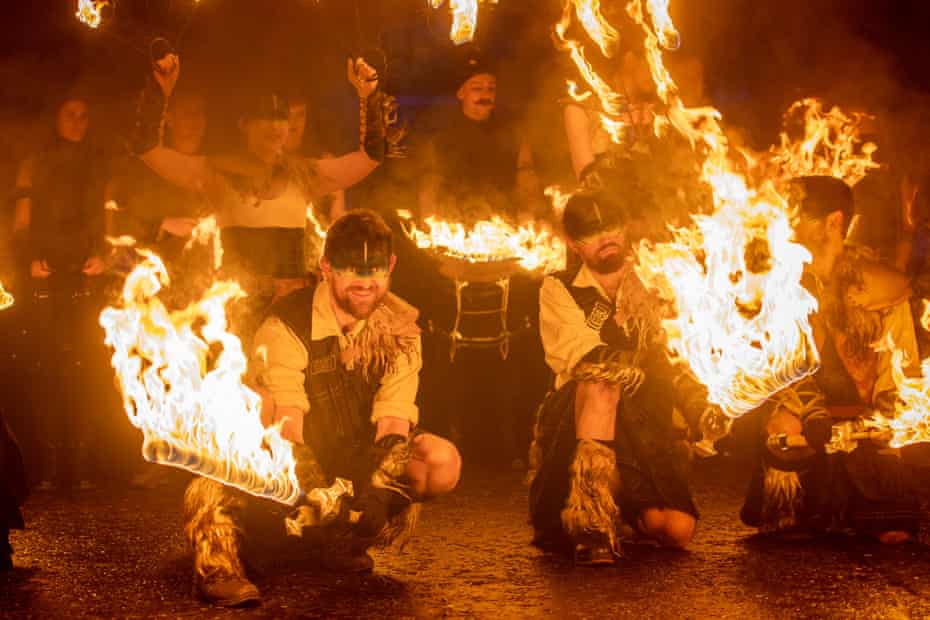 Besides concerts, street parties, fireworks and more earthbound fire spectaculars, as well as consumption of one of Scotland’s most famous products, Scotch whisky, a number of very ancient traditions associated with Hogmanay in Scotland can still be found in smaller communities and private celebrations:

Like the annual spring cleaning in some communities or the ritual cleaning of the kitchen for the Jewish festival of Passover, families traditionally did a major cleanup to ready the house for the New Year. Sweeping out the fireplace was very important and there was a skill in reading the ashes, the way some people read tea leaves. Another part of the annual clean-up, that probably is more remembered than observed these days, was paying off all outstanding debts before the stroke of midnight. After the big cleanup, at a time of year when fire plays such a huge part in celebrations, it’s only natural to bring a bit of it into the freshened house. And of course, soap and water and dustpans don’t really deal with all those folk from the invisible realms. So someone goes from room to room carrying a smoking juniper branch to discourage evil spirits and chase away disease. 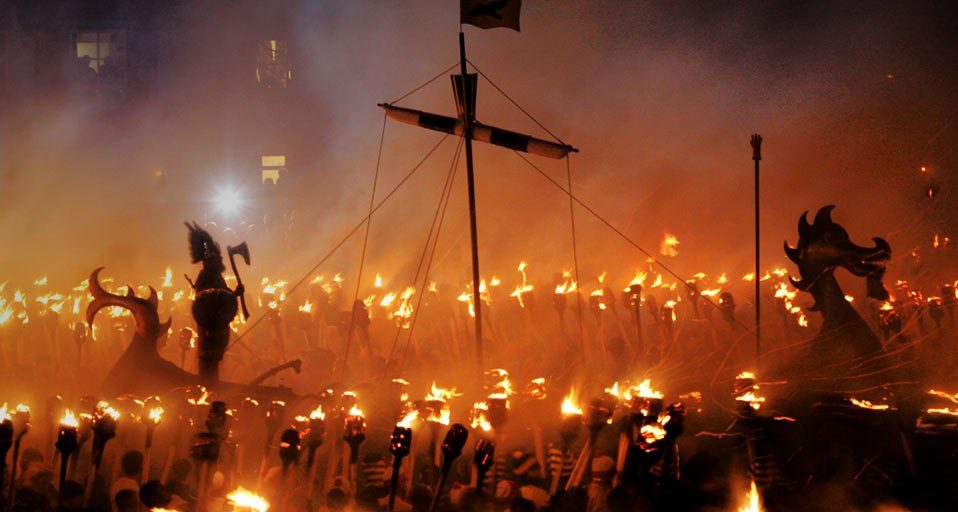 After the stroke of midnight, neighbors visit each other, bearing traditional symbolic gifts such as shortbread or black bun, a kind of fruit cake. The visitor, in turn, is offered a small whisky—a wee dram. It’s called “first footing” as the first person to enter a house in the New Year, the first foot, is said to bring luck for the whole year to come. 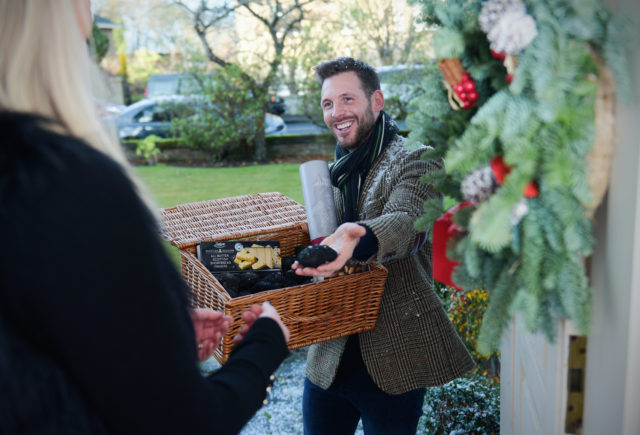 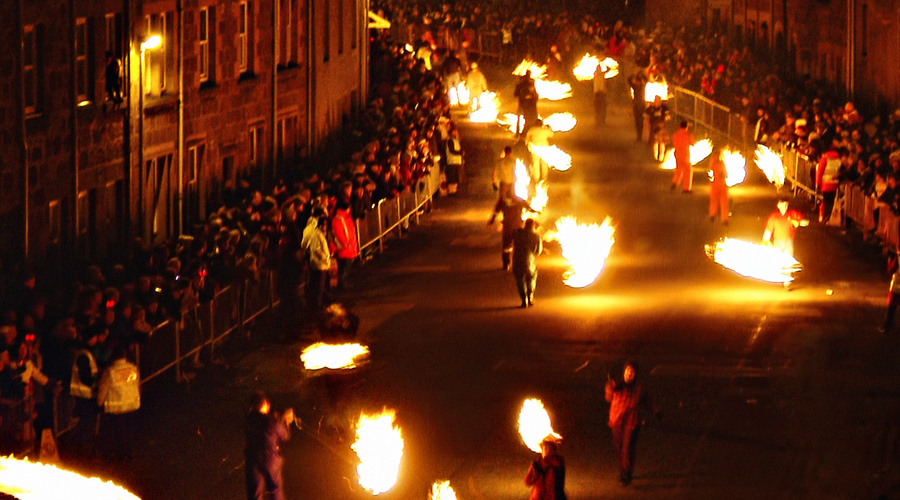 Scotland’s fire festivals at Hogmanay and later in January may have pagan or Viking origins. The use of fire to purify and drive away evil spirits is an ancient idea. Fire is at the center of Hogmanay celebrations in Stonehaven, Comrie and Biggar and has recently become an element in Edinburgh’s Hogmanay celebration.

The Singing of Auld Lang Syne

All over the world, people sing Robert Burns’ version of this traditional Scottish air. How it became the New Year’s song is something of a mystery. At Edinburgh’s Hogmanay, people join hands for what is reputed to be the world’s biggest Auld Lang Syne.

The Saining of the House

This is a very old rural tradition that involved blessing the house and livestock with holy water from a local stream. Although it had nearly died out, in recent years it has experienced a revival. After the blessing with water, the woman of the house was supposed to go from room to room with a smoldering juniper branch, filling the house with purifying smoke (there’s that smoldering juniper branch again). Of course, this being a Scottish celebration, traditional mayhem was sure to follow. Once everyone in the household was coughing and choking from the smoke, the windows would be thrown open and reviving drams (or two or three) of whisky would be passed around. 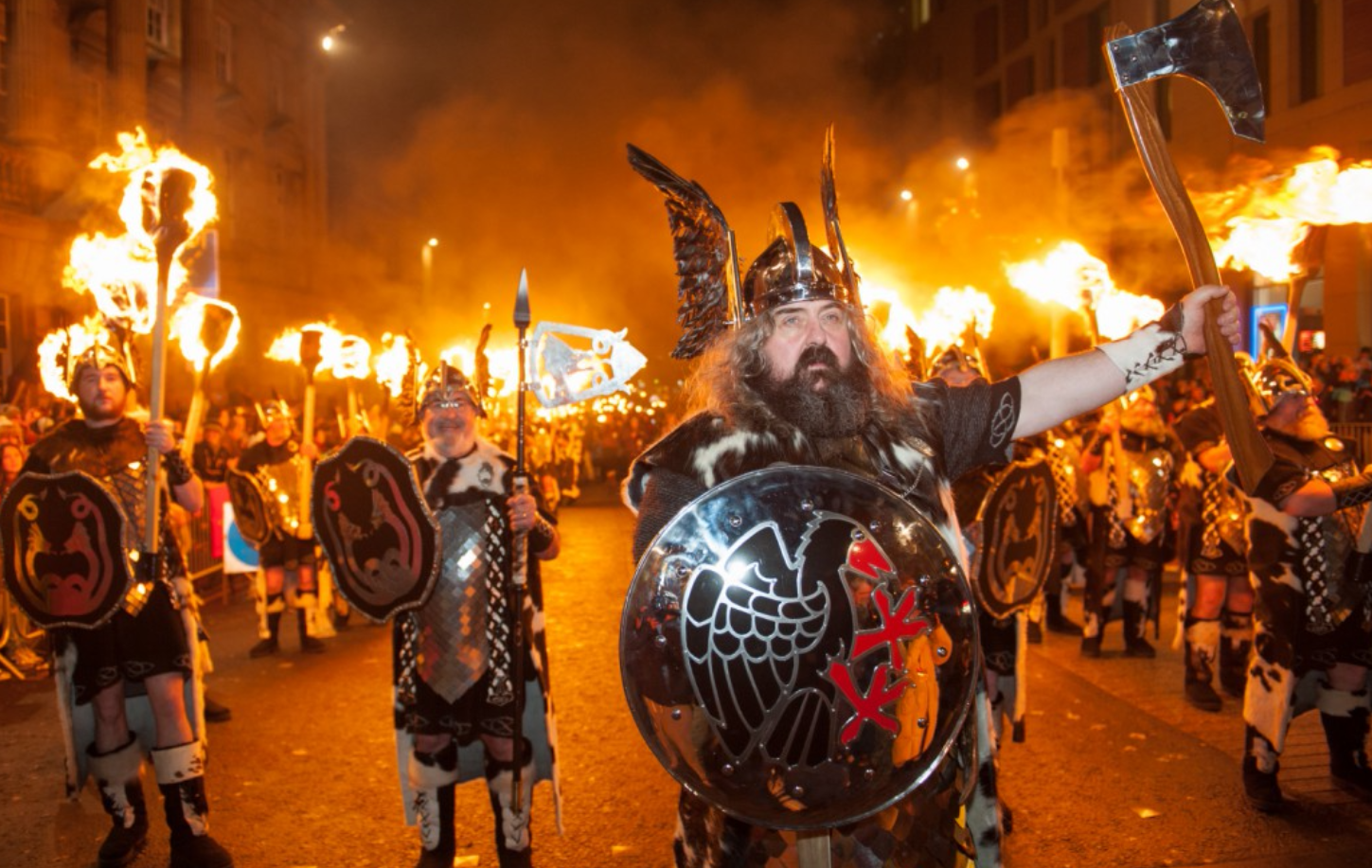 Why is Hogmanay so important to the Scots

Although some of these traditions are ancient, Hogmanay celebrations were elevated in importance after the banning of Christmas in the 16th and 17th centuries. Under Oliver Cromwell, Parliament banned Christmas celebrations in 1647. The ban was lifted after Cromwell’s downfall in 1660. But in Scotland, the stricter Scottish Presbyterian Church had been discouraging Christmas celebrations – as having no basis in the Bible, from as early as 1583. After the Cromwellian ban was lifted elsewhere, Christmas festivities continued to be discouraged in Scotland. In fact, Christmas remained a normal working day in Scotland until 1958 and Boxing Day did not become a National Holiday until much later.

But the impulse to party, to exchange gifts, and to put the products of Scotland’s famous distilleries to good use, could not be repressed. In effect, Hogmanay became Scotland’s main outlet for the mid-winter impulse to chase away the darkness with light, warmth and festivities well-oiled with plenty of uisge baugh, also known as the water of life and, you guessed it, whisky.

The Best Pubs In Glasgow, Scotland