There’s a reason that Oahu, Hawaii is known as the definition of paradise. The tropical weather and iconic beaches combined with the rich Hawaiian culture make it seem like it’s own little world out in the Pacific. A Hawaiian getaway is unlike any other beach vacation. Known as the Aloha State, the spirit of aloha is what makes Hawaii so magical.

While tourists should participate in standard tourist faire, such as a traditional luau or a stroll up Diamond Head, consider adding some lesser known items to your itinerary in Oahu. Venture away from tourist hotspots like Waikiki and experience local life. After visiting the island countless times to see my family, I’ve compiled a list of some of my favorite activities that you can only do in Oahu. Here are five must-have experiences for your next visit to Oahu!

Head to Lanikai Beach while it’s still dark to experience what I believe is the best way to start a day — with a Hawaiian sunrise. Walk along the water or sit on the shore and watch the colors come out and dance along the clear blues of the ocean.

You’ll see members of the local canoe club taking their canoes out and paddle boarders heading out into the waves. I recommend staying until the sun is fully overhead in order to appreciate the way the colors change. Sitting on the beach and looking up at the sky, I always find it easier to re-focus my thoughts and feel a true sense of relaxation. 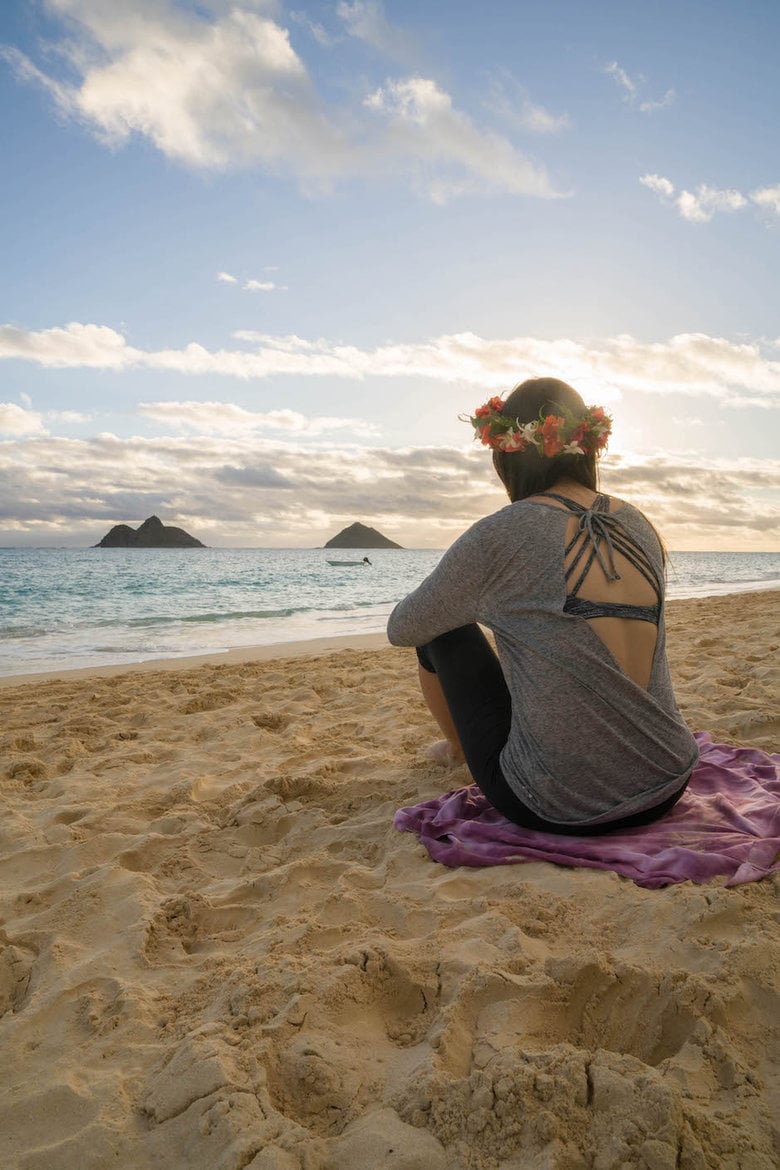 Lanikai Beach is located in Kailua, a town on the east side of Oahu. While you’re in the area, check out a popular hike known as “Pillboxes” where you’ll be rewarded with panoramic views of the shoreline and Kailua town.

The hike is relatively short (about 1 hour depending how far you choose to go) and leads you to abandoned Pillboxes, previously used by the military but now used by hikers to sit and enjoy the scenery. 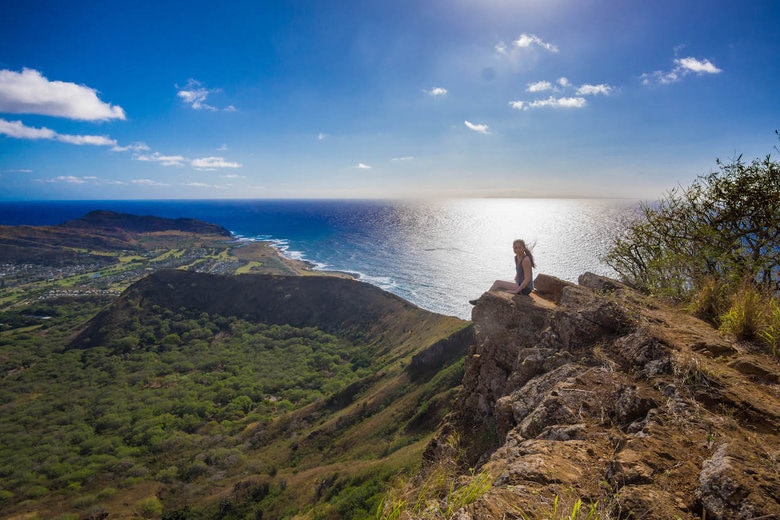 If you’re feeling hungry for breakfast, head over to Agnes Bakery for malasadas, a Portuguese fried pastry, and other baked goods. For a more sit-down breakfast experience, head to Cinnamons Cafe. This spot has reasonable prices and is famous for pancakes that come in flavors like guava or red velvet. 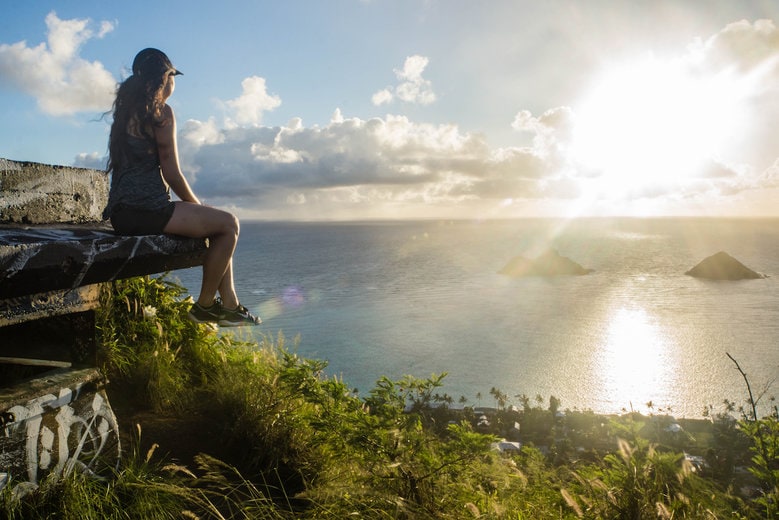 2) SUNBATHE WITH SEA TURTLES ON THE NORTH SHORE

Stop at Laniakea Beach on Oahu’s North Shore and you’re likely to see a few sea turtles swimming in the reef and sunning on the shore. Fondly known as Honu, Hawaiian sea turtles are thought to be a symbol of wisdom. Watching these magnificent creatures is an unforgettable experience. Swimming with them is magical.

Honu are an endangered species so volunteers patrol the beach to make sure visitors don’t get too close. Be respectful and keep your distance from these creatures to ensure their health and the species’ future. Honu are best seen in the summer months when the surf is low. 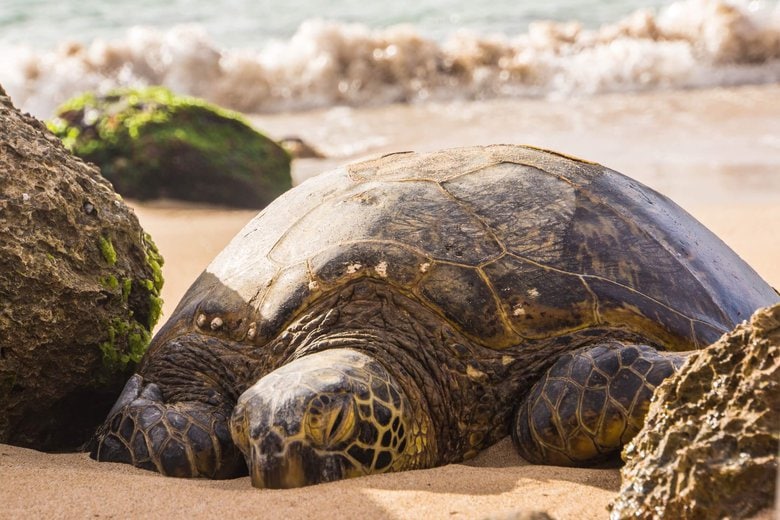 From Laniakea Beach, head down to Sunset Beach which is located just off Kamehameha Highway just after the Banzai Pipeline and Waimea Bay. The beach is famous for the high surf in the winter, where waves can reach 15-30 feet. However, the waves are calm during summer months. You can also book a room at the nearby Turtle Bay Resort if you want to stay close by! 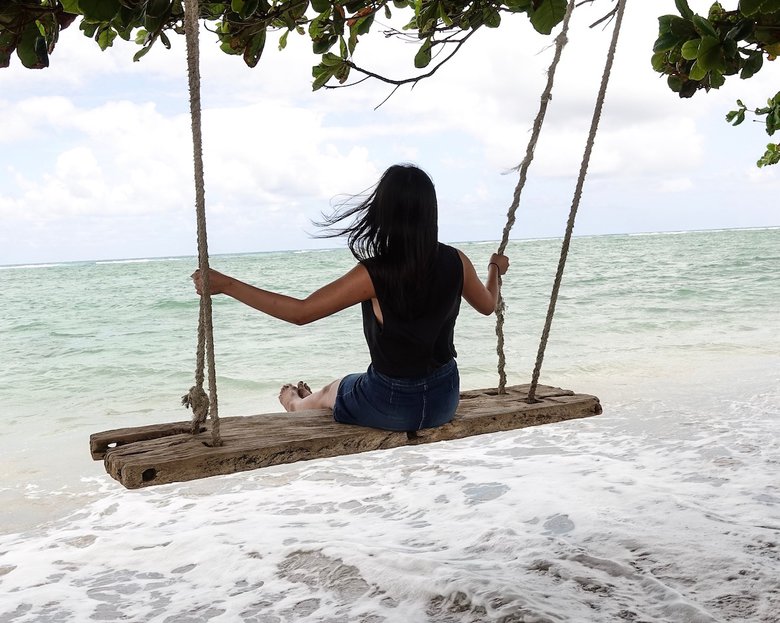 Essentially a staircase straight up a mountainside, Koko Head is the ultimate “leg-day” workout. The trail is the remains of an abandoned railroad track built during World War II. While it’s a relatively short hike (1.8 miles), there is a sharp incline and a 1092 foot elevation, so don’t mistake this for a casual stroll.

At the top, you’ll be rewarded with panoramic views of Honolulu. On one side, you’ll have incredible ocean views and on the other, you can see Koko Head Crater. It is easy for me to spend at least 30 minutes at the top admiring the view. The trail is busiest in the morning and on the weekends. The path offers almost no shade, so I recommend going in the morning or evening and bringing sufficient water. If you go for sunset, you will need a flashlight in order to navigate your way back down the stairs. 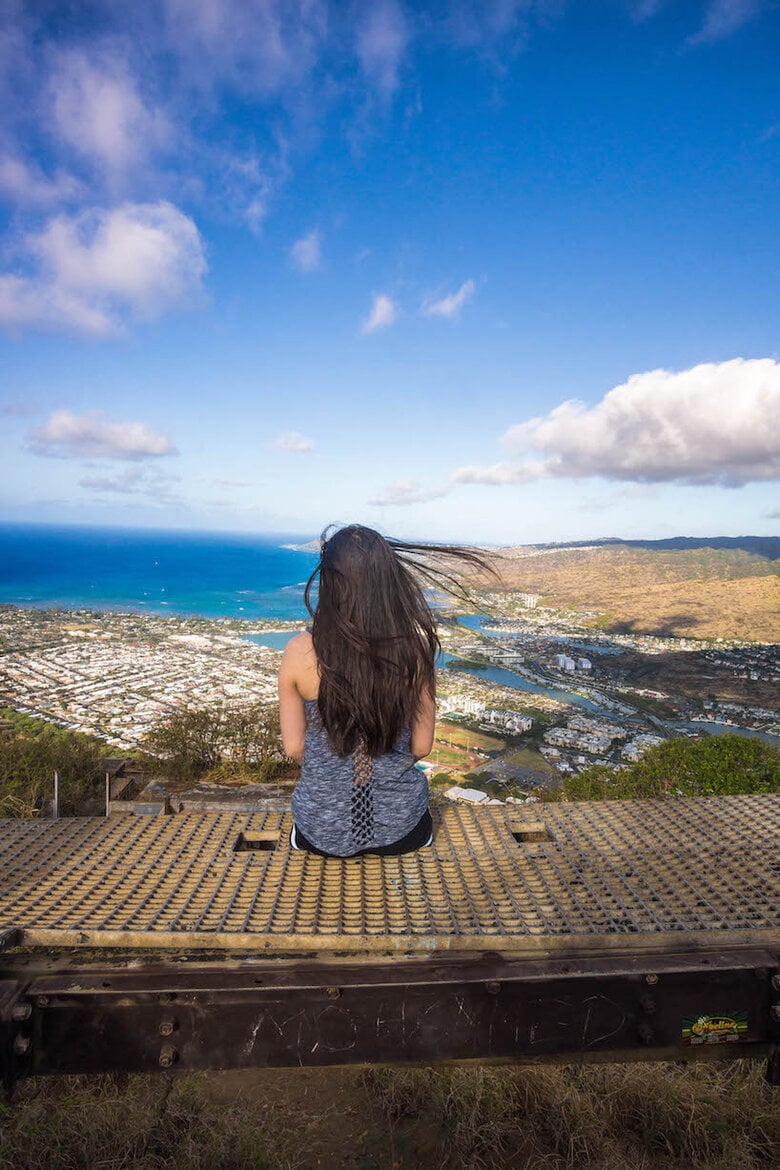 4) SNACK ON A HAWAIIAN SHAVE ICE

Not to be called a “snow cone,” Hawaiian shave ice is an art. You need a perfect combination of soft ice and flavorful syrup. They’re best enjoyed after a day at the beach with your hair still wet and sand stuck between your toes. My favorite is Island Snow Hawaii located in Kailua, but Matsumoto’s Shave Ice on the North Shore of Oahu draws locals and tourists from around the world.

When ordering, you can pick from ice cream or sweetened azuki beans (Japanese red beans cooked with sugar and water) that will be placed at the bottom of your cup before the ice. Don’t be afraid to try out unfamiliar syrup flavors like Li Hing Mui (dried plum that gives a sweet, sour, and salty flavor) or POG (passion orange guava). Personally, my favorite is a shave ice with vanilla ice cream and pineapple, guava, and coconut syrup! 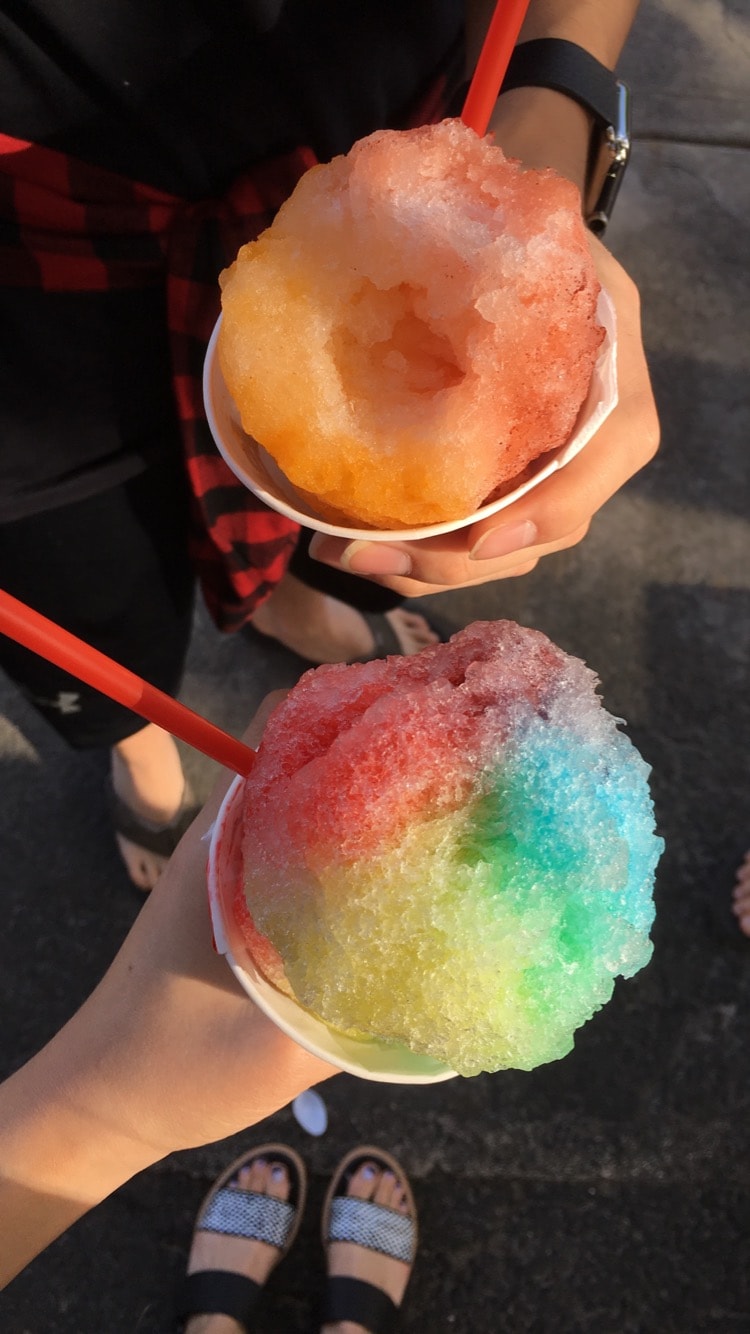 5) DRIVE DOWN THE NU’UANU PALI DRIVE

Instead of taking the Pali Highway (Route 61), take a detour down the Nu’uanu Pali Drive. The lesser used route is one of Oahu’s most scenic drives despite the lack of ocean views. This road is covered overhead by dense jungle, and you’ll feel as though you’re driving through a tunnel of trees. The road is perfect for photos, so people often pull over to the side of the road and hop out to snap a few shots. Be sure to roll down the windows and turn to the local Hawaiian music station 105.1 FM as you take a drive down the Nu’uanu Pali Drive. 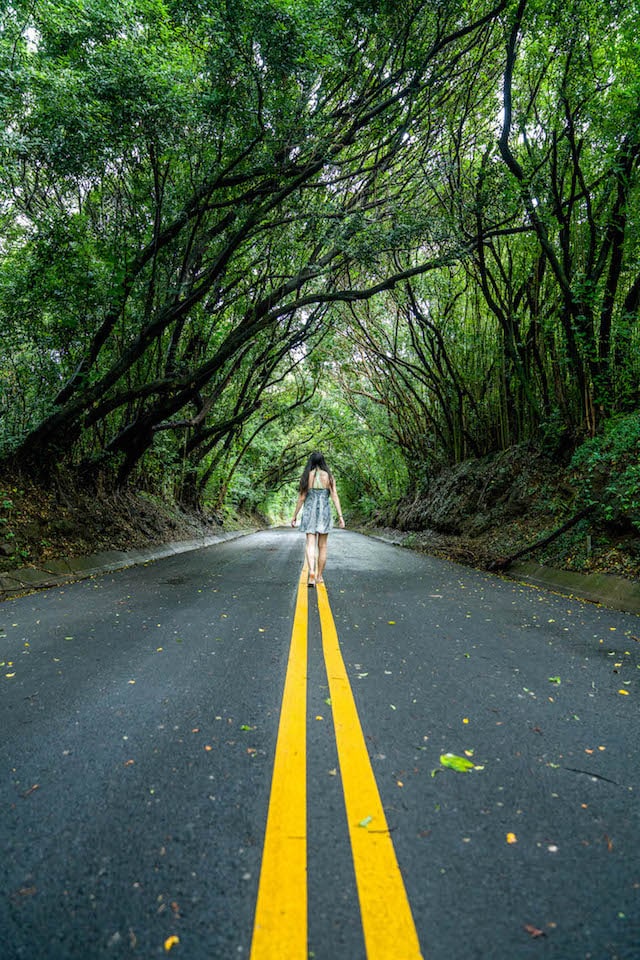 Oahu’s beauty is something that everyone can appreciate. From the traditional beach paradise views to lesser known local treasures, the island is sure to impress even the most well-travelled individual. If you have some extra time in your itinerary, check out some of my suggestions for an unforgettable Hawaiian experience. Aloha!

The 5 Most Famous Surfers from Hawaii

Fall in Love All Over Again at Sweetheart Rock

The Oahu, Hawaii Travel Guide for the Adventurer