During my whirlwind tour of Central Europe, I admit I was looking forward to Zurich the least. But the mix of modern and old sold me on this beautiful city.

Zurich is located in the north-central part of Switzerland, nestled on the tip of Lake Zurich. It is the largest city in Switzerland and offers the busiest airport and train station in the entire country. Zurich is somewhat a financial hub with one of the biggest financial centres in the world. 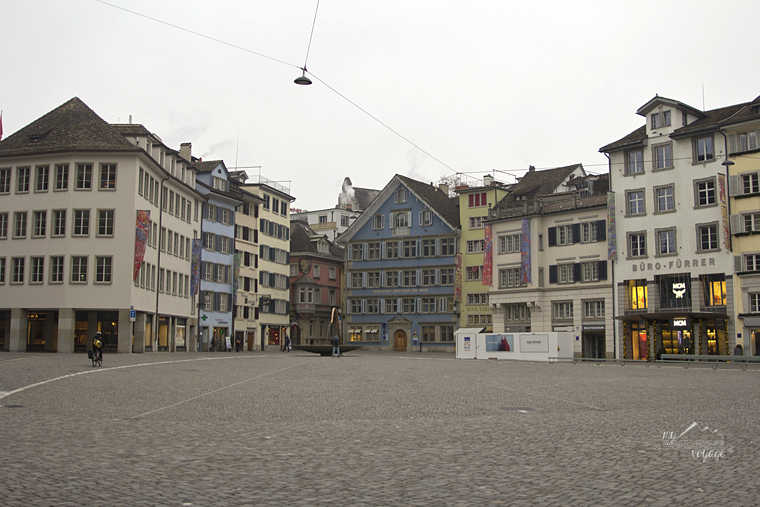 I stayed outside of the old town and took the train into the downtown. I have never been more impressed with a transit system in my life. Not only were the trains and trams on time, but the system was easy to understand! What a marvellous invention!

The fog had rolled in as soon as I entered Switzerland and didn’t clear until I headed back into Germany. I missed out on seeing the Alps up close and seeing Lake Zurich, but the chilly fog didn’t stop me from exploring this incredible city.

Here are five things you have to do while visiting Zurich, Switzerland.

Eating fondue in Switzerland is an obvious choice, I mean it is a traditional Swiss dish of delicious melted cheese served in a warm pot with bread. There are many fondue restaurants in the city. I went to Walliserkeller right in the old town. There you can dine in small ski lifts while you moan and groan over the amazing fondue. 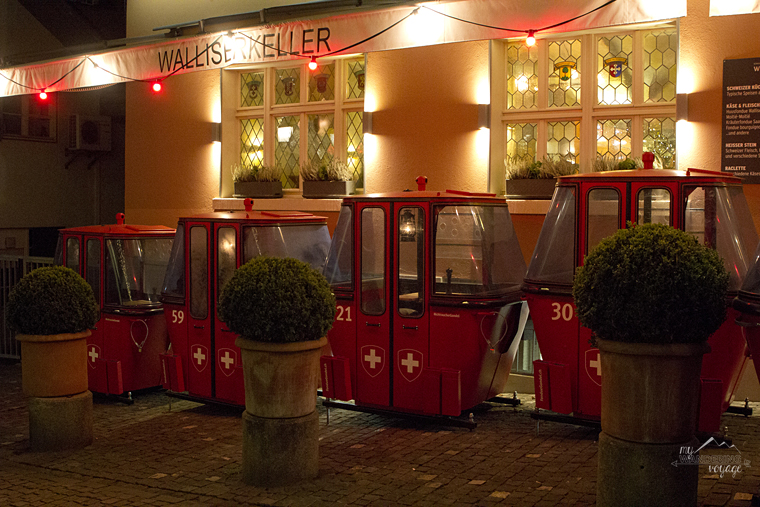 Fondue isn’t cheap, but go ahead and splurge on this delicacy to you can say you did it!

Check out the waterfront at night 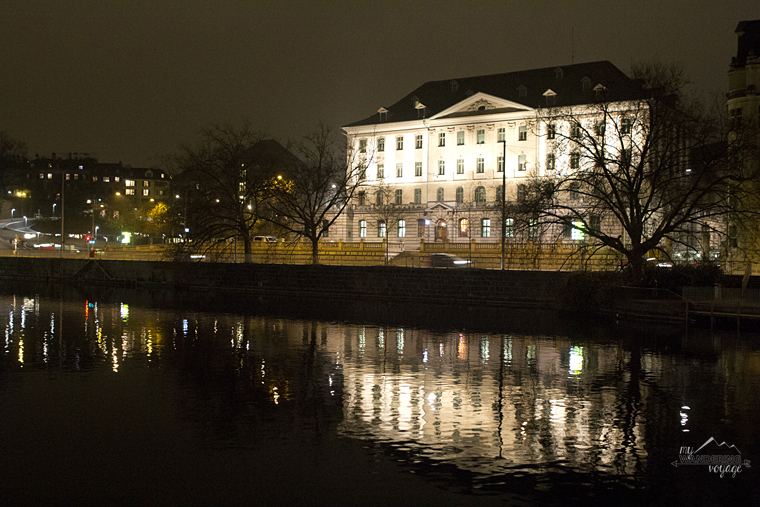 I think any old European city can look beautiful during the day, I mean just look at the architecture. Buildings that are older than dust, yet still stand. We do not have this in Canada, which makes it just that much more special.

Zurich sits on Lake Zurich. The river that feeds into that lake cuts the city in half, growing wider the closer to the lake it gets. The historic area of Zurich sits at the mouth of the river. At night, the lights of the city glitter in the quiet reflection of the water, giving the impression that the city is larger than it is. 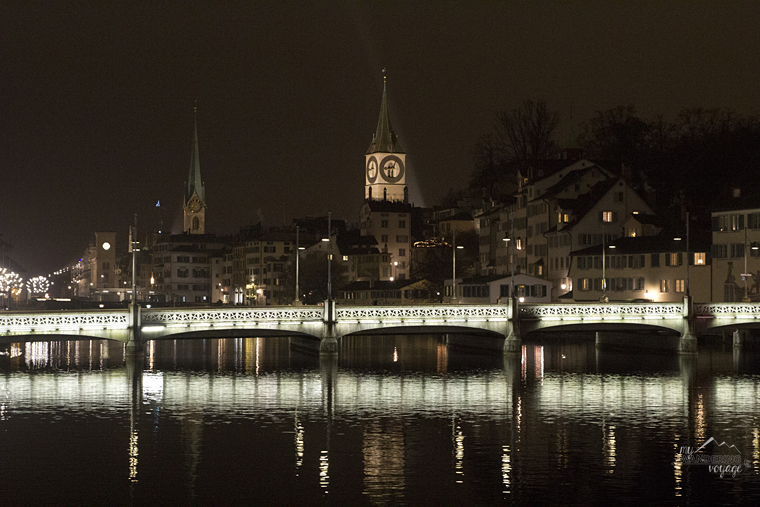 Take a stroll (you can do a giant loop) along the waterfront of the old town at night and see the twinkling lights yourself.

From the Bahnhofbrucke you can see the lights of the Giacometti-Halle, St Peter’s Church, Fraumunster Church and Rathaus. 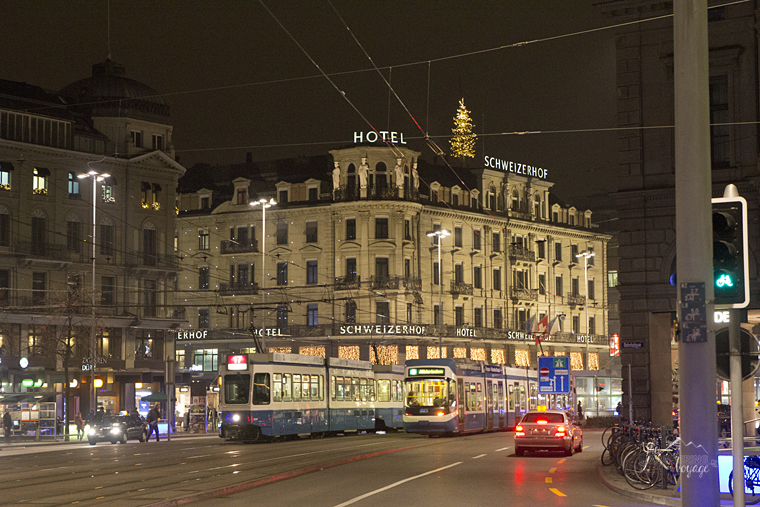 As I have already mentioned, I was *hella* impressed with Zurich’s tram system. At every stop, there was a map, a clock, and a chart. It was the easiest tram system I have ever experienced. We didn’t have a lot of time in Zurich, so we used the system to get where we wanted to go quickly.

As someone who grew up in a town without public transit, having an easy system while travelling is important to me.

While I understand photographer’s frustrations of trying to photograph the beautiful buildings of Zurich but having tramlines cut through the picture, there is a clear need for public transit. 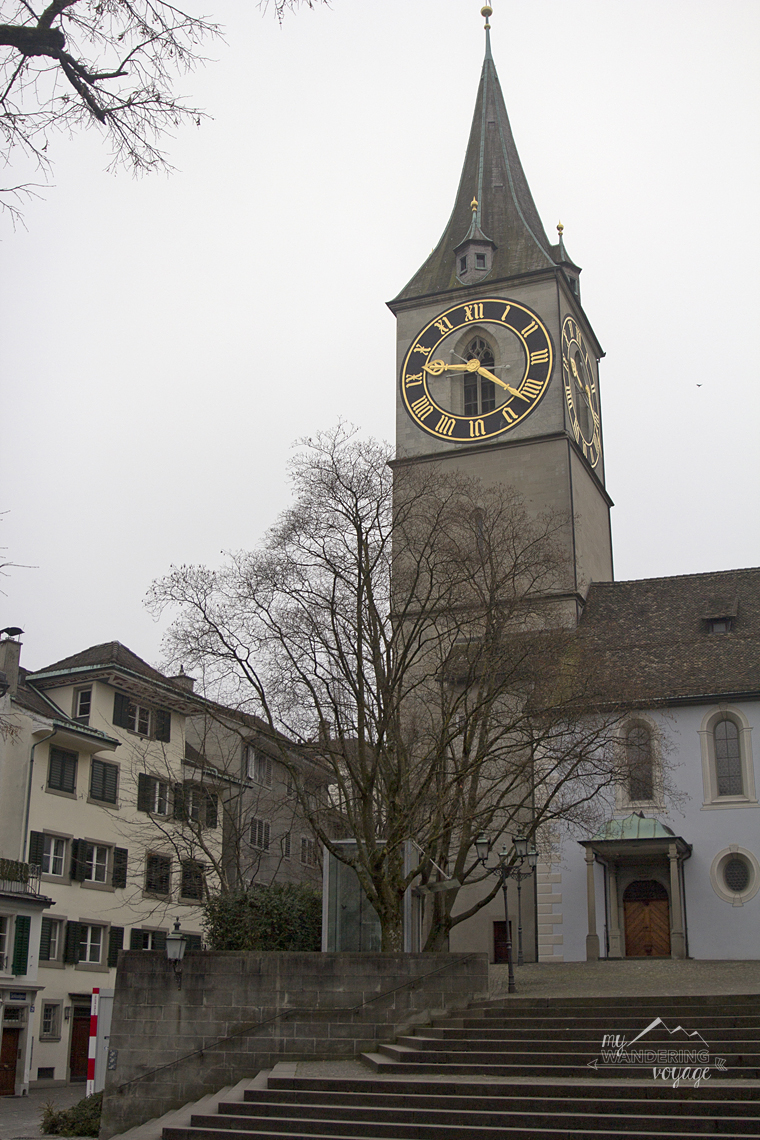 Standing on any of the bridges that pass over Limmat River, you can easily see the clock towers of each of the churches in Zurich. Finding them is a different matter. Standing tall over the surrounding buildings, St. Peter’s Church is home to the largest clock face in all of Europe. It measures 8.6 metres across. 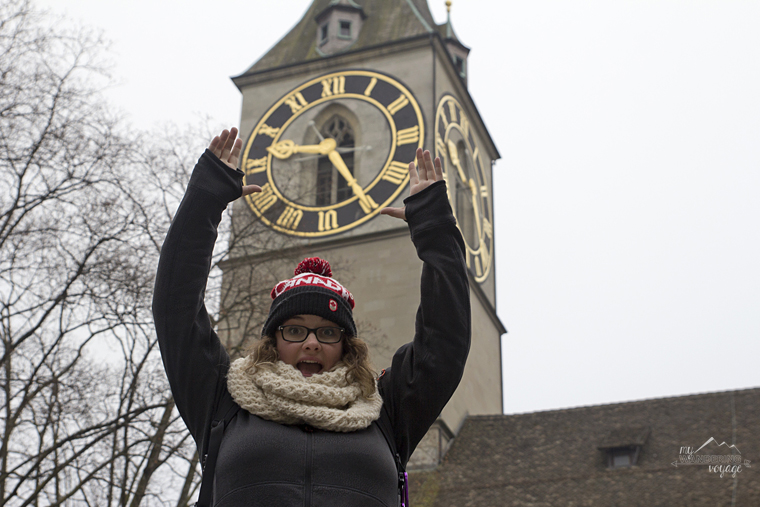 Try out an optical illusion and hold all of time in your hands as I did! 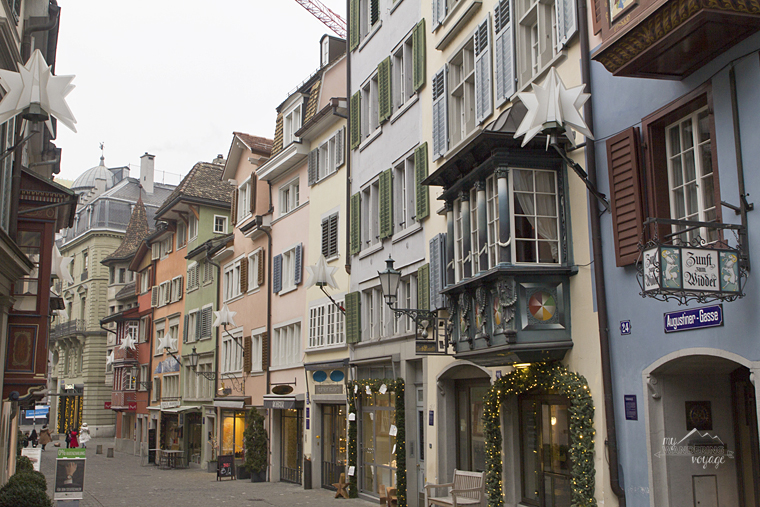 There’s a certain art to the streets of Zurich. In Lindenhof district and the opposite Old Town, streets twist and turn and curve, so you end up lost among the old buildings.

I love walking along these streets, and stumbling upon hidden treasures, like Munsterhof and Circus Conelli. 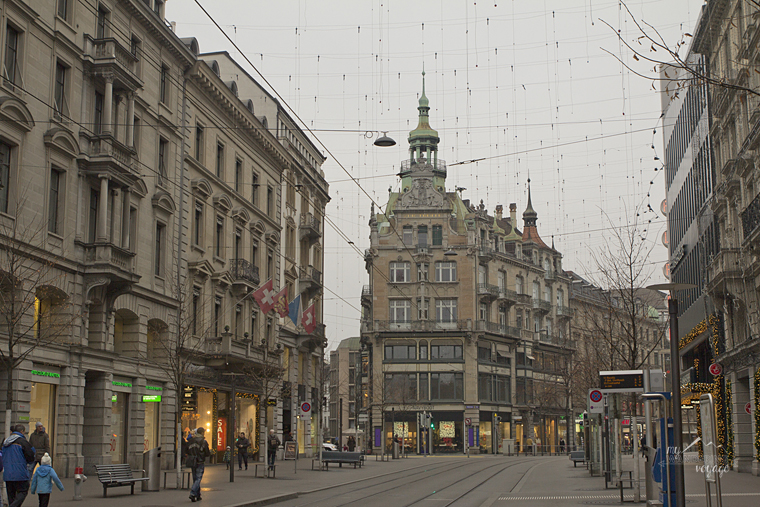 Even walking along famous roadways such as Bahnhofstrasse, an attractive promenade with expensive shops, can be relaxing.

What’s one thing you want to do if you visit Zurich, Switzerland?

Why you should date a Swiss?

10 Most Beautiful Castles in Switzerland