New Zealand is a beautiful country, but you have to travel to the north and the south to get the most out of your trip there!

One of the most underrated destinations in the world, New Zealand caters to every kind of traveler. Whether you want to walk through the magnificent natural landscape, hike to the top of iconic volcanos, visit movie sets, or participate in thrilling water sports, this unique country has you covered.

The North Island of New Zealand is home to major cities like Auckland and Wellington, while the South boasts locations such as Christchurch and Queenstown. In between the cities and towns, there are endless sights to see, attractions to visit, and adventures to embark on. Check out these 5 amazing things to do on New Zealand’s South Island, and 5 on the North Island. 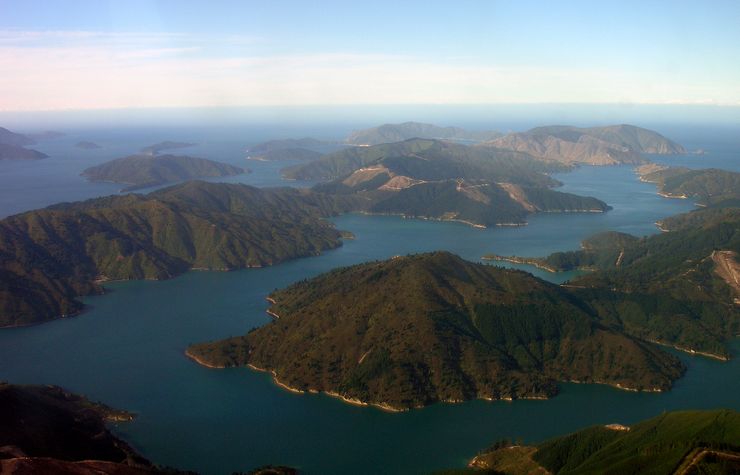 One of the most stunning sights you’ll ever see, not just in New Zealand but in the world, is the beauty of the Marlborough Sounds. Spanning out nearly 933 miles, the coastline is a historic site that boasts a number of spectacular islands. If there’s one place that you’ll want to have your camera ready, it’s here.

It’s up to you how you travel through the Sounds. You can walk or cycle along the Queen Charlotte Track from Ship Cove, kayak along the coast, or take a cruise through the hauntingly beautiful waters.

9. North Island: Get To Know Whakaari 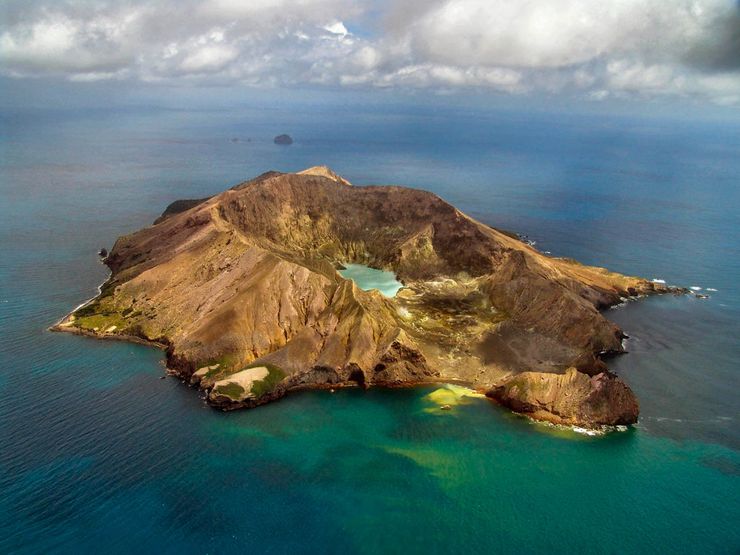 While on the North Island, you have to take some time out to see Whakaari, otherwise known as the White Island. The active volcano is located in the Bay of Plenty and emerged through the volcanic activity that has been taking place for over 150,000 years.

A truly otherworldly landmark, Whakaari should be on your bucket list if you’re visiting the North Island. Witness the bubbling mud, Sulphur deposits, and a lake of steaming acid that looks like it came straight out of a mystical land. This is definitely a sight not to be missed! 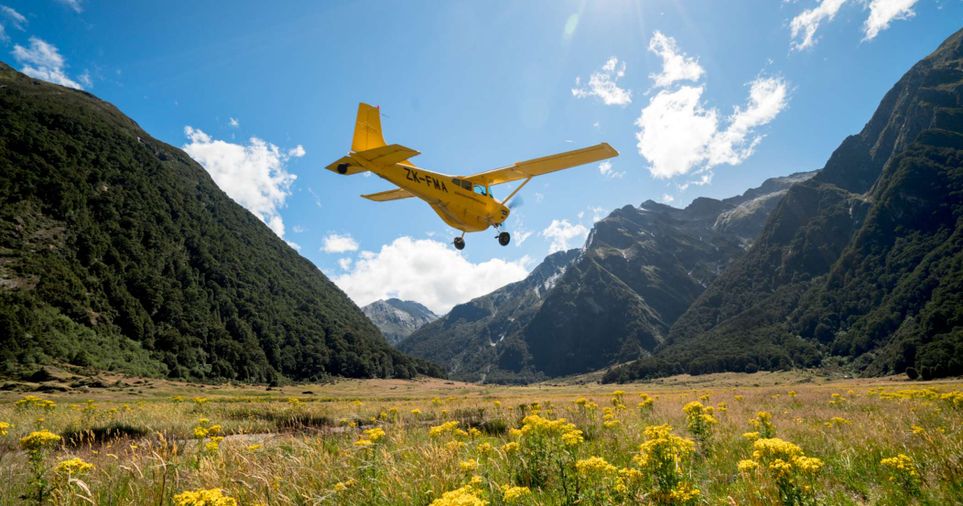 The wilderness of New Zealand is a phenomenal sight.

One of the best places to witness the beauty of this country is in Mount Aspiring National Park on the South Island. Here you’ll find mountains, peaceful rivers, still lakes, and rugged glaciers.

The park boasts more than enough activities to keep any outdoor enthusiast satisfied. Spend your time in the park jet boating, hiking, or simply walking around and taking in the wonder around you. You could easily spend hours in this stunning natural landscape, Wi-Fi or no Wi-Fi. 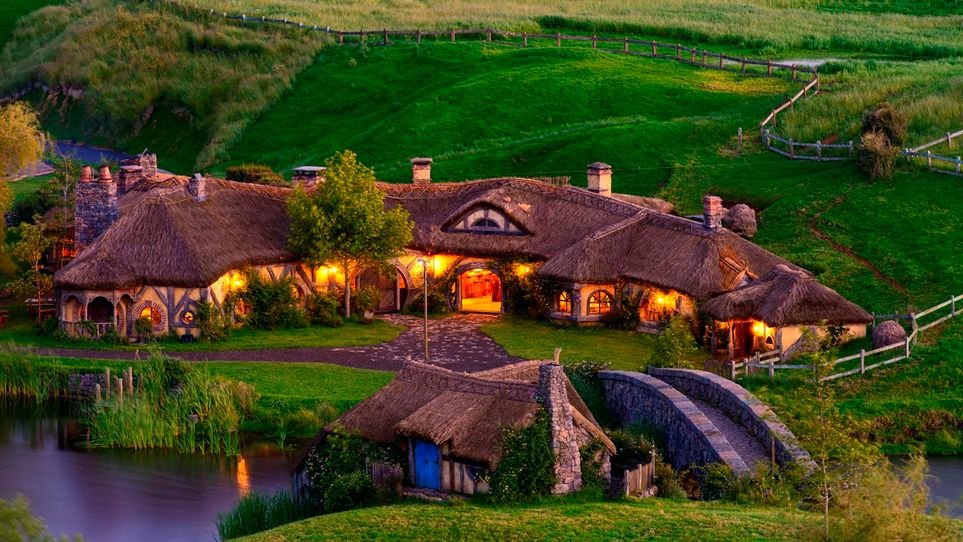 New Zealand couldn’t be further from Hollywood, but that doesn’t mean it’s free from the magic of show business. The Waikato countryside on the North Island was actually the setting for many of the scenes in The Lord of the Rings and The Hobbit.

Explore the countryside yourself, or take a tour of the Hobbiton movie set. You’ll get to see the party Tree, hobbit holes, and even the Green Dragon Inn, where you can also kick back with a pint of Southfarling ale. This is a must for any fan of the franchise! 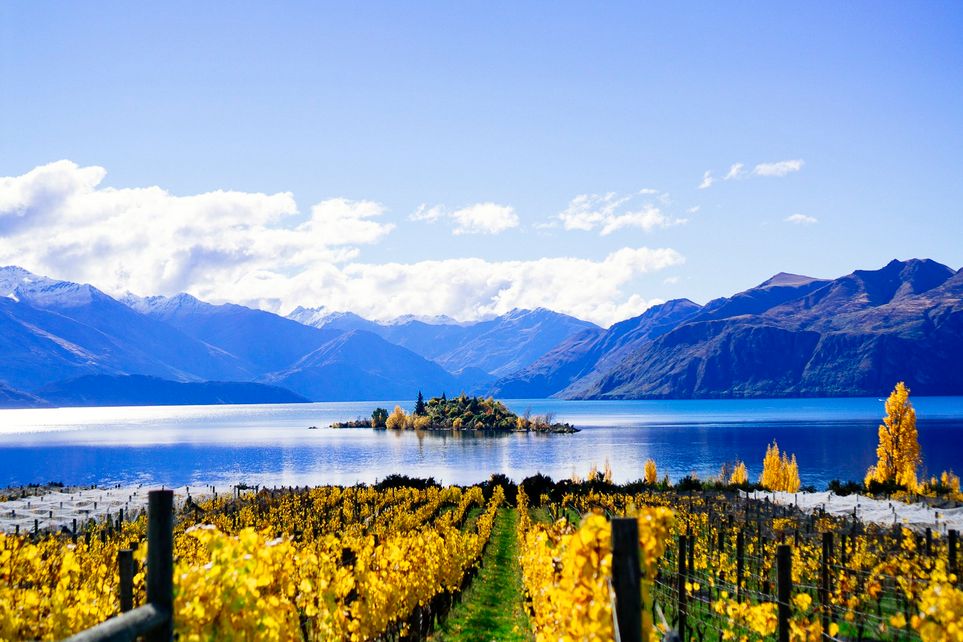 The South Island is home to some of the most exquisite wineries in the world. The vineyards in Central Otago, in particular, are well-known for their contributions of Pinot Noir to the world. While in the area, visit the wineries, learn about the process from the wine-makers, and spend an afternoon tasting what’s on offer.

5. North Island: Get Muddy In Rotorua 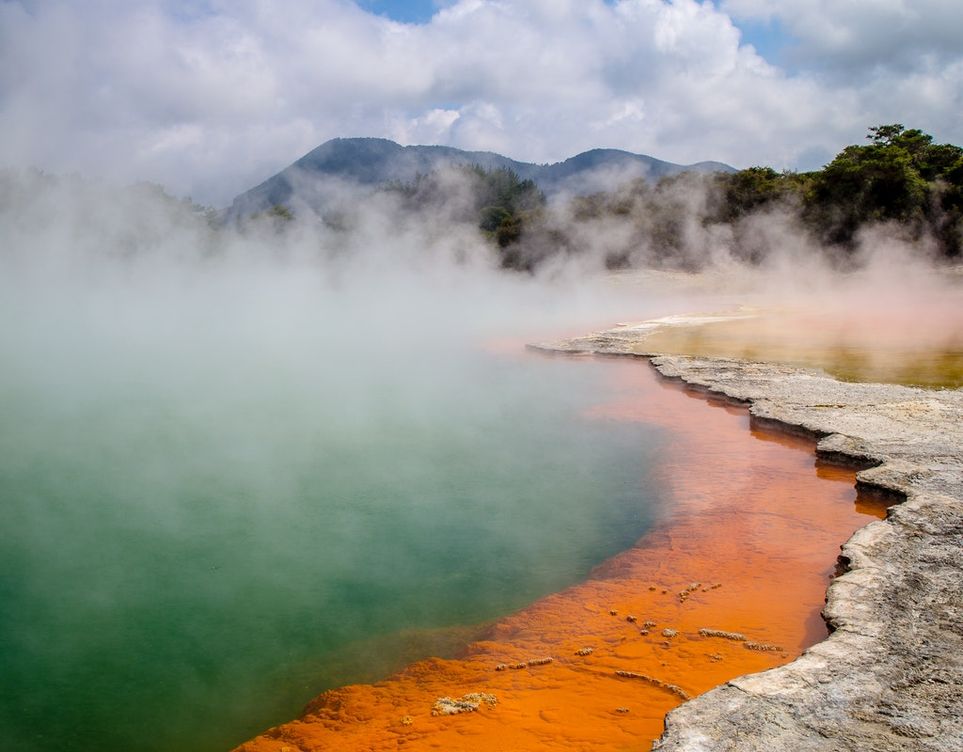 The wonders of Rotorua on the North Island are second to none. The volcanic landscape here is distinct in Oceana and boasts plenty of fascinating phenomena. While in Rotorua, you’ll get to witness bubbling pools of mud, the Pohutu Geyser, and the interesting silica terraces.

If you love to explore nature’s marvels, be sure to also check out Waimangu and its prehistoric landscape, along with the Champagne Pool and chasms of Wai O Tapu. Rotorua is also home to a Maori cultural center, which will showcase the food, traditions, and performances of the native people of New Zealand. 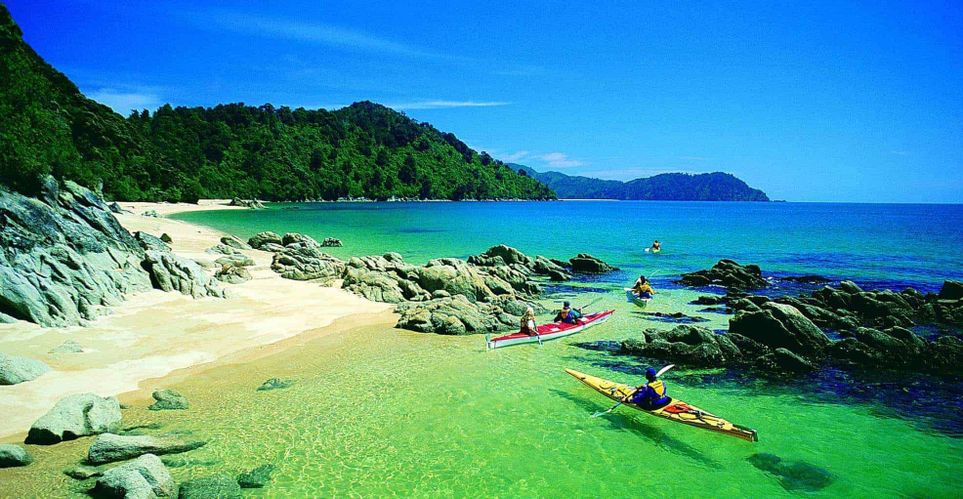 If there’s one thing New Zealand’s certainly not short of, it’s national parks. While on the South Island, pay a visit to the fantastic Abel Tasman National Park which boasts plenty of walking trails through untouched natural landscape. The coastal track in the park will take you along the beach where you’ll pass native flora and limestone cliffs.

The park is home to several sheltered bays, which are ideal for sailing or kayaking. Keep your eyes open for dolphins and seals who regularly visit the nearby waters of the park. 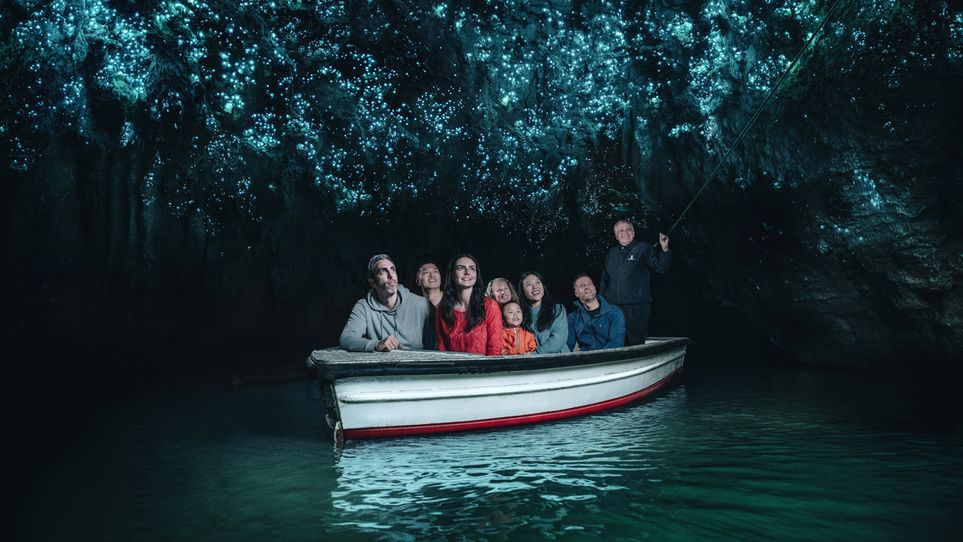 There are some truly magnificent caves in the world, but the Waitomo Caves on New Zealand’s North Island are among the very best. The network of underground caves will make you feel like you’ve landed on another planet. The stalactites, stalagmites, and glowworms in the walls and roofs of the caves are breathtaking to witness

You can take a guided tour of the caves, by boat or on foot. There is also a Black Water Rafting trip on offer, which is an adventurous way to explore the underground waterways. 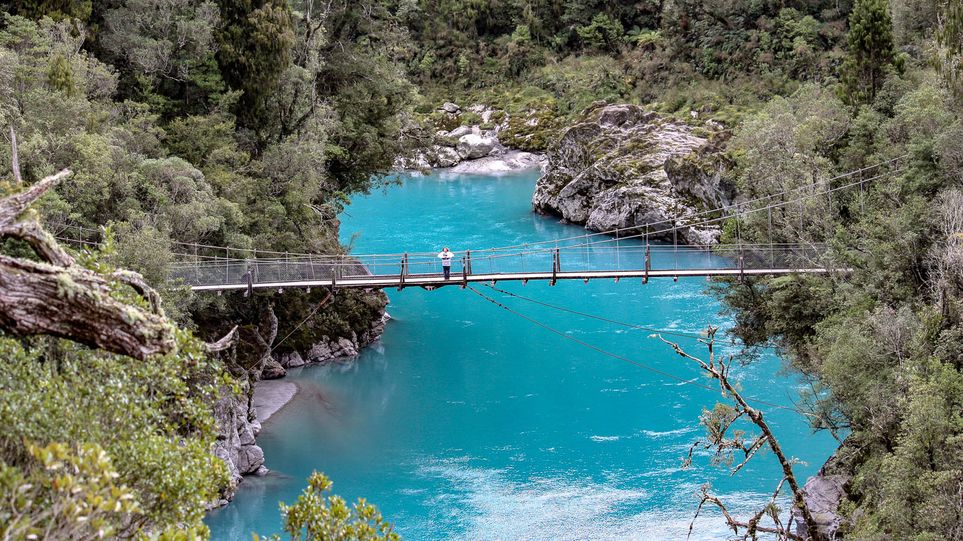 Nature lovers have to add Hokitika Gorge to their bucket list while in New Zealand. Situated on the South Island, this gorge is as marvelous in real life as it is in photos. And you’ll certainly want to come away from the gorge with lots of those since this is one sight that’ll be sure to impress your family and friends.

The gorge is close to the town of Hokitika, which is full of historic buildings and charming art galleries. Be sure to visit the Cool Little Town, as it’s known to locals, along with the world-famous gorge. 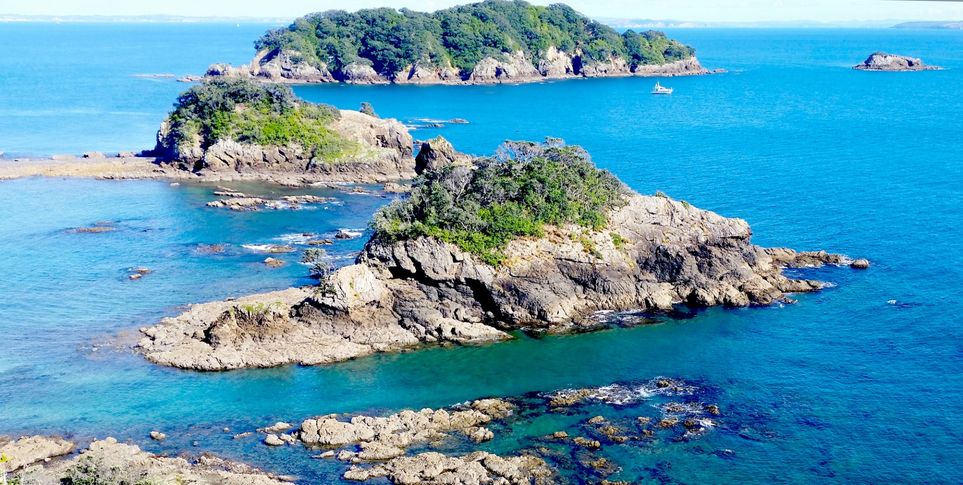 New Zealand is surrounded by gorgeous waters and picturesque offshore islands. One of the most beautiful gulfs in the Hauraki Gulf, which you’ll see from the major city of Auckland. The gulf, most of which is part of Hauraki Gulf Marine Park, is the perfect place for sailing, kayaking, cruising, and even bird-watching.

You won’t regret island-hopping here since there are around 50 islands to see. Visit places like the Tiritiri Matangi bird sanctuary. Check into the Waiheke Island for a spot of fine dining, after enjoying the summit views of the Rangitoto volcano.

10 Best Things To Do In Hokitika, NZ

What to do in Wellington New Zealand: Bee Hive to Cuba Street