Moving to Switzerland? Then why not learn a little more about your new home country with our 30 surprising facts about Switzerland.

What do you really know about Switzerland? Nestled in the heart of Europe, this compact little country has an interesting – and neutral – history. If you’re relocating there, then why not discover more about this sparkling alpine nation with this list of our favorite Swiss facts. From nuclear bunkers to soaring mountains, here are 30 informative and interesting truths about Switzerland that might just surprise you.

1. Switzerland has a few different names… 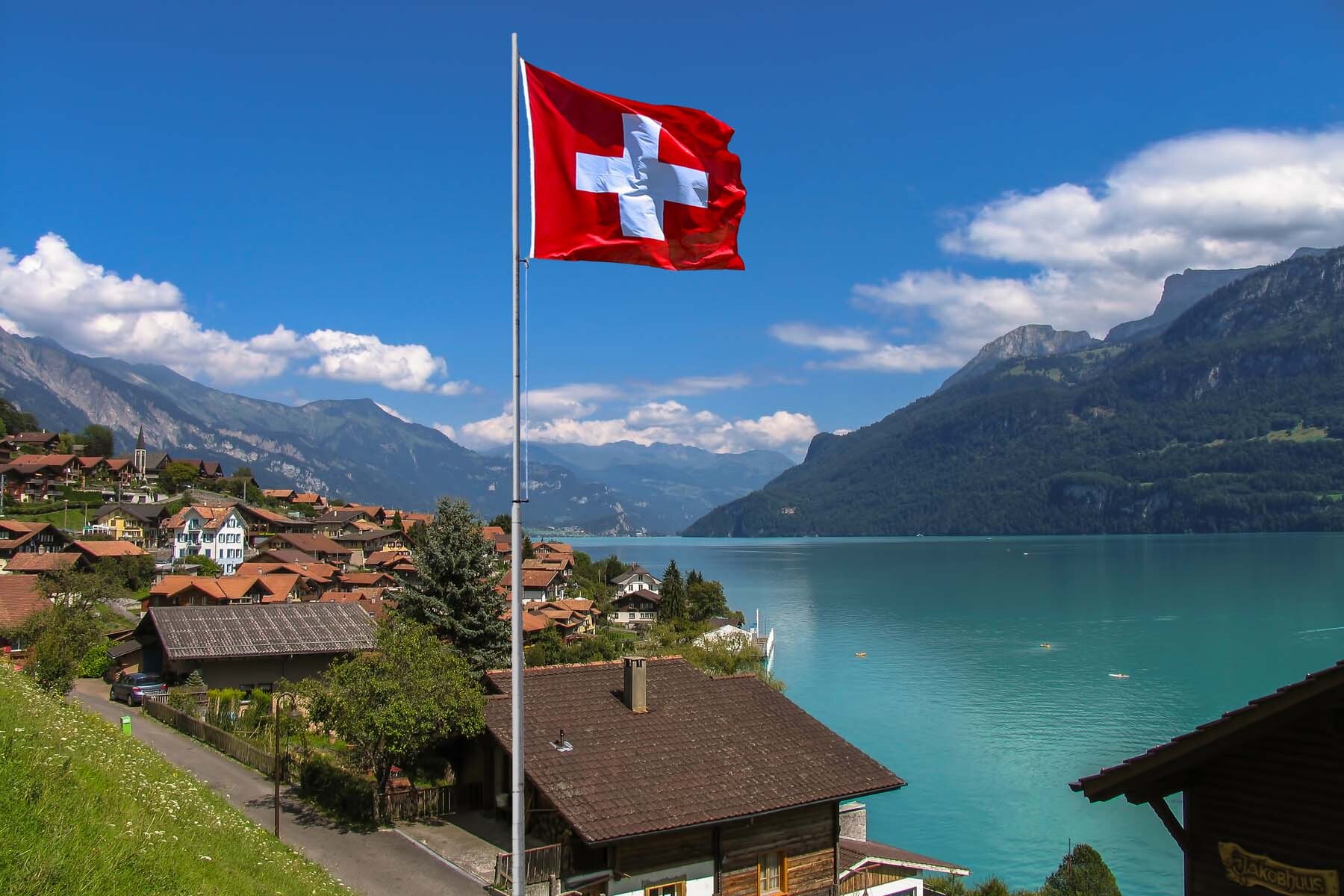 The English name for Switzerland unsurprisingly means “Land of the Switzer”, which is an old name for the Swiss people. However, there are actually a few other names that you will see dotted throughout the country. This includes La Suisse in French and Die Schweiz in Germany. You will often see its Latin name Confoederatio Helvetica used, too. This is also abbreviated to .ch in Switzerland’s internet code domain.

2. … and an unusually square flag

The Swiss flag is among the most iconic in the world: the simple white cross on a red background. You’ll see it throughout the country, on official buildings, and during sports events. However, there’s one noticeable difference between the Swiss flag and others. It’s square, and entirely unique among sovereign states, apart from tiny Vatican City.

3. Switzerland is a country of towering mountains…

With much of the country covered by the Alps, Switzerland is one of the highest countries in Europe. In total, there are precisely 208 Swiss mountains that stretch up past 3,000 meters. These include the legendary Matterhorn, which can be seen on bars of the famous Swiss chocolate brand, Toblerone. Want to explore more iconic Swiss foods? Then check out our delicious guide. You can always count on a beautiful, pristine lake to add a touch of magic to any photograph. And if you happen to live in Switzerland, then you certainly have your fair share to choose from. In fact, the country is home to more than 7,000 lakes. While Lake Geneva, which lies to the west, is undoubtedly the most famous, you won’t have any trouble finding your own private lagoon if you venture into the great Swiss countryside.

Switzerland is entirely landlocked, meaning that it has no coastline. Instead, the country is bordered by five countries: France, Germany, Austria, Liechtenstein, and Italy. However, southern Switzerland enjoys a largely Mediterranean climate. So should you be in need of some last-minute sea breezes, the Italian coastline is less than 200km from the Swiss border.

You’ll probably know that Switzerland was neutral during WWII, but this neutrality goes back even further than that. After centuries of continental conflict, European powers decided that they liked the idea of Switzerland as a neutral buffer. And in 1815, this neutrality was sealed at the Congress of Vienna. To this day, Switzerland remains the oldest neutral nation in the world. 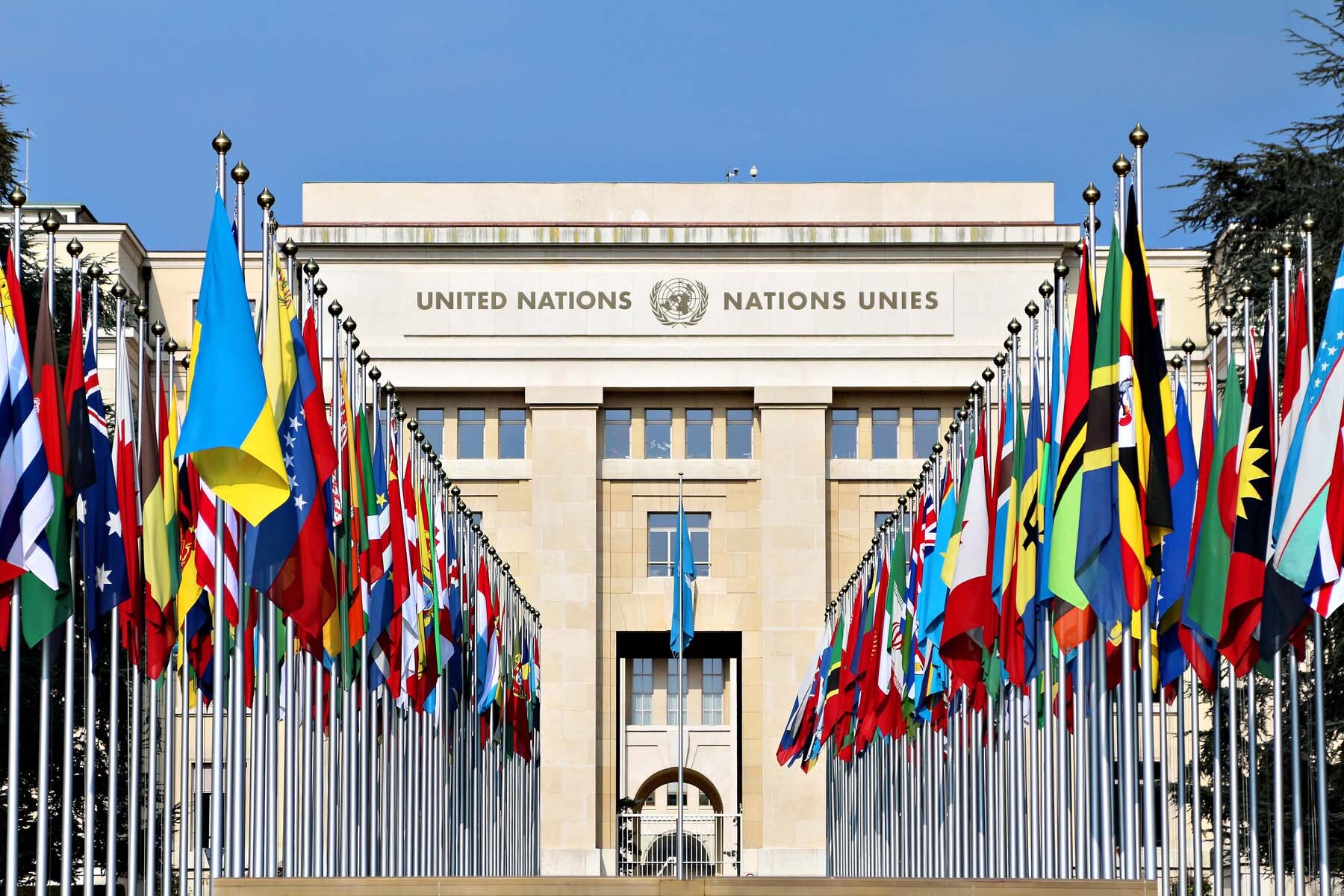 It’s not just global conflicts in which Switzerland remains neutral. Despite its location in central Europe, the country is neither a member of the European Union or the European Economic Area. Unlike many of its neighbors, it’s also not a member of NATO and didn’t join the United Nations until 2002.

8. Switzerland is well-prepared for conflict…

Considering the tempestuous nature of European history, it’s probably a good idea to be prepared for the worst. Well, the Swiss have done just that. One of its defense strategies is to load every main access point into the country with explosives. Around 3,000 bridges, roads, and railway lines along the Swiss border are primed to blow at a moment’s notice!

Switzerland is also well-prepared for nuclear conflict. So well-prepared, in fact, that the entire country is equipped – by law – with nuclear bunkers. Many rural homes have their own bunkers, but communal ones also exist. You’ll knowingly spot some of these bunkers when exploring, as many have entrances that are disguised as quaint country cottages. 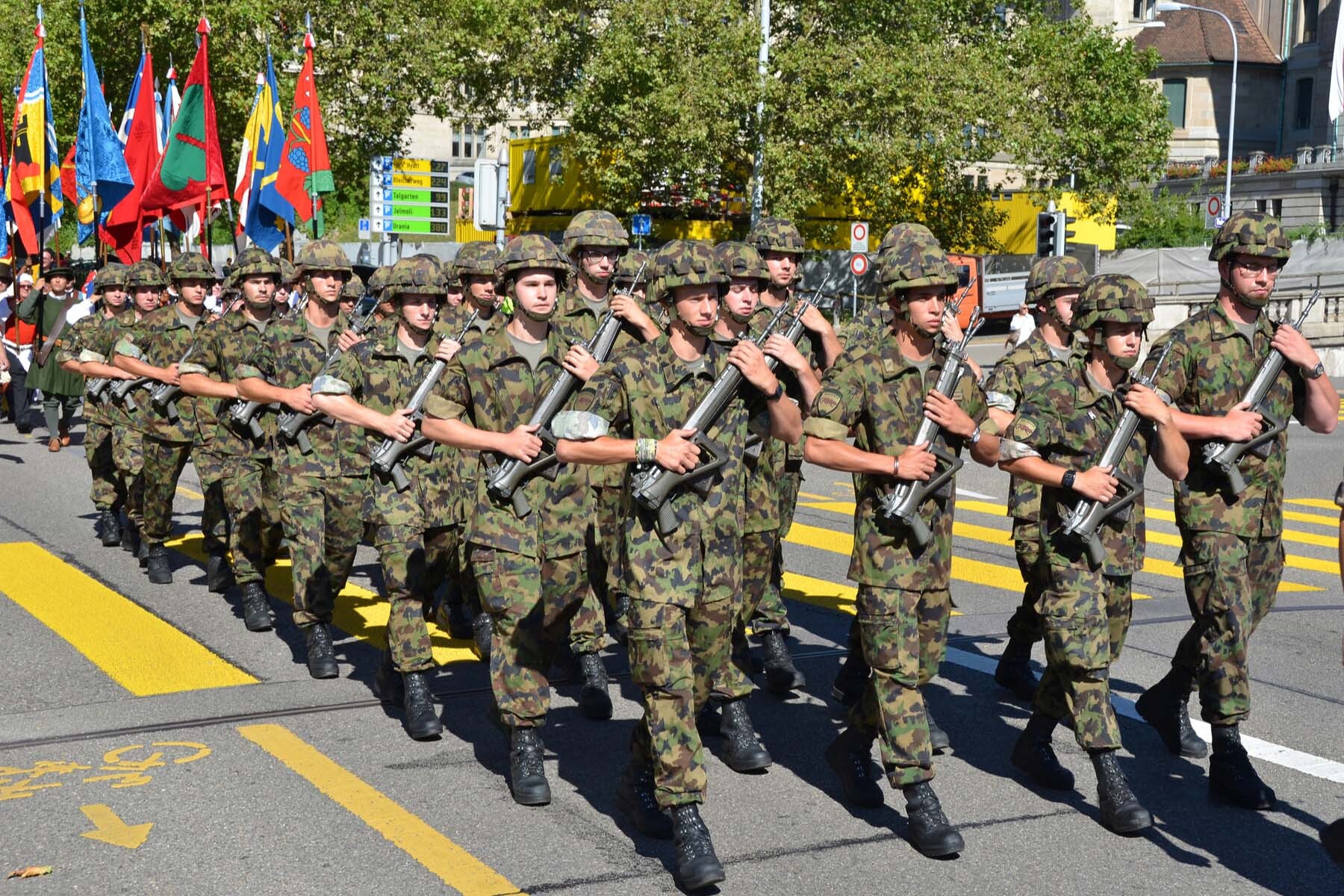 Switzerland is one of the last remaining countries in western Europe to have compulsory military services. To this day, all male Swiss citizens over the age of 18 are expected to serve in the Swiss army, with regular “refresher courses” continuing until the age of 44. Military training camps are therefore a common sight across Switzerland. Female citizens can also choose to volunteer.

One of our most surprising Switzerland facts is that the country has one of the highest gun ownership rates in the world. However, don’t let that put you off moving to this alpine gem because Switzerland regularly records low crime rates. In reality, much of this gun ownership stems from military service, and personal are expected to take their rifles home – albeit unloaded.

12. Switzerland has a rich sporting history…

Despite its relatively small size, Switzerland has definitely punched above its weight on the global stage. In football, the country hosted the European Championships (with Austria) in 2008 and the World Cup back in 1954, when it reached the quarter-finals. However, you may be more interested to learn about traditional alpine sports, such as Schwingen (Swiss wrestling).

13. … especially when the mercury drops

As you might expect from this mountainous land, the Swiss really excel in winter sports. Many see skiing as the national sport, and the country hosts plenty of winter sports championships. The resort of St Moritz has hosted the Winter Olympics twice (1928 and 1948, respectively), with the Swiss Olympic team regularly returning home from the games with medals.

14. Switzerland is home to the world’s largest machine…

Switzerland has a long and celebrated history when it comes to science and engineering. Therefore, it should probably come as no surprise that it’s the home of the famous Large Hadron Collider. Built by the European Organization for Nuclear Research (CERN), the world’s largest high-energy particle collider sits inside a 27km-long tunnel near the Swiss city of Geneva.

Coming in at a staggering 57km in length, Switzerland’s Gotthard Tunnel is the longest tunnel in the world. Located 2.3km beneath the Alps, the tunnel was built to strengthen rail connections between the north and south of the country. The tunnel took 17 years to complete, and cost an eye-watering €11 billion.

16. It’s also the home of relativity…

Although German by birth, it was while living in the Swiss capital, Bern, that Albert Einstein developed the world’s most famous equation, E=mc2. In fact, the physicist spent several years living in Switzerland. He spent many of them as a patent clerk, before taking a role as a lecturer at the nearby University of Bern. 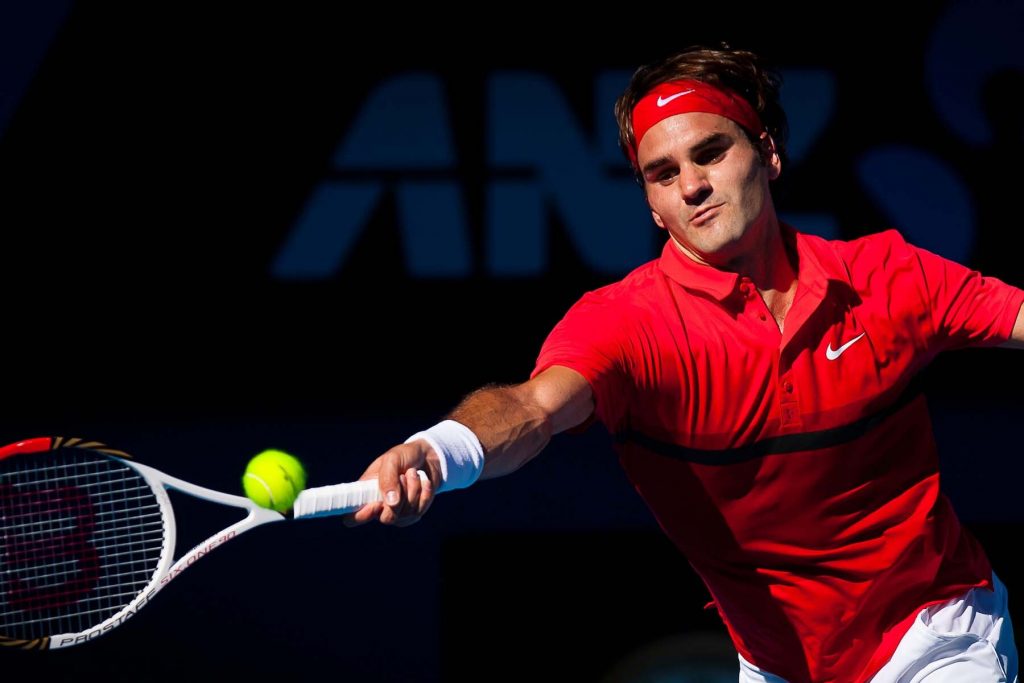 You probably know the popular Swiss army knife. This versatile tool is loved throughout the world and NASA even sends them into space. However, did you know that the first Swiss army knives weren’t actually made in Switzerland? That’s right. One of our favorite Switzerland facts is that they were originally produced just over the border in southern Germany.

For a small country, Switzerland certainly aces it on the tennis court. The alpine nation has brought the world Martina Hingis, Stanislas Wawrinka, and, of course, Roger Federer. Hingis was just 16 when she won the first of her 25 Grand Slam titles, while Federer has notched up a record 20 Grand Slam singles titles. Now, how’s that for some smashing Switzerland facts!

The Swiss Confederation consists of 26 regions, called cantons. These cantons can vary significantly depending on their culture and geography, and you’ll be surprised at just how different they can be. The most populated canton is Zürich, while the least populated is Appenzell Innerrhoden. This canton can be found to the east of the country. That’s right, Switzerland has four official languages: German, French, Italian, and Romansch. The most widely-spoken language is Swiss German, a dialect of standard German. French is largely spoken in the west of the country, while Italian is the prominent language in the south. However, you’ll find that English is widely spoken, particularly among young Swiss people.

Switzerland was one of the last European countries to allow women to vote on a federal level. However, the tiny canton of Appenzell Innerrhoden didn’t let women vote on a local level until 1991 when it was forced to change its archaic laws by the Federal Supreme Court of Switzerland. Perhaps unsurprisingly, gender equality in the country still lags behind that of its neighbors. 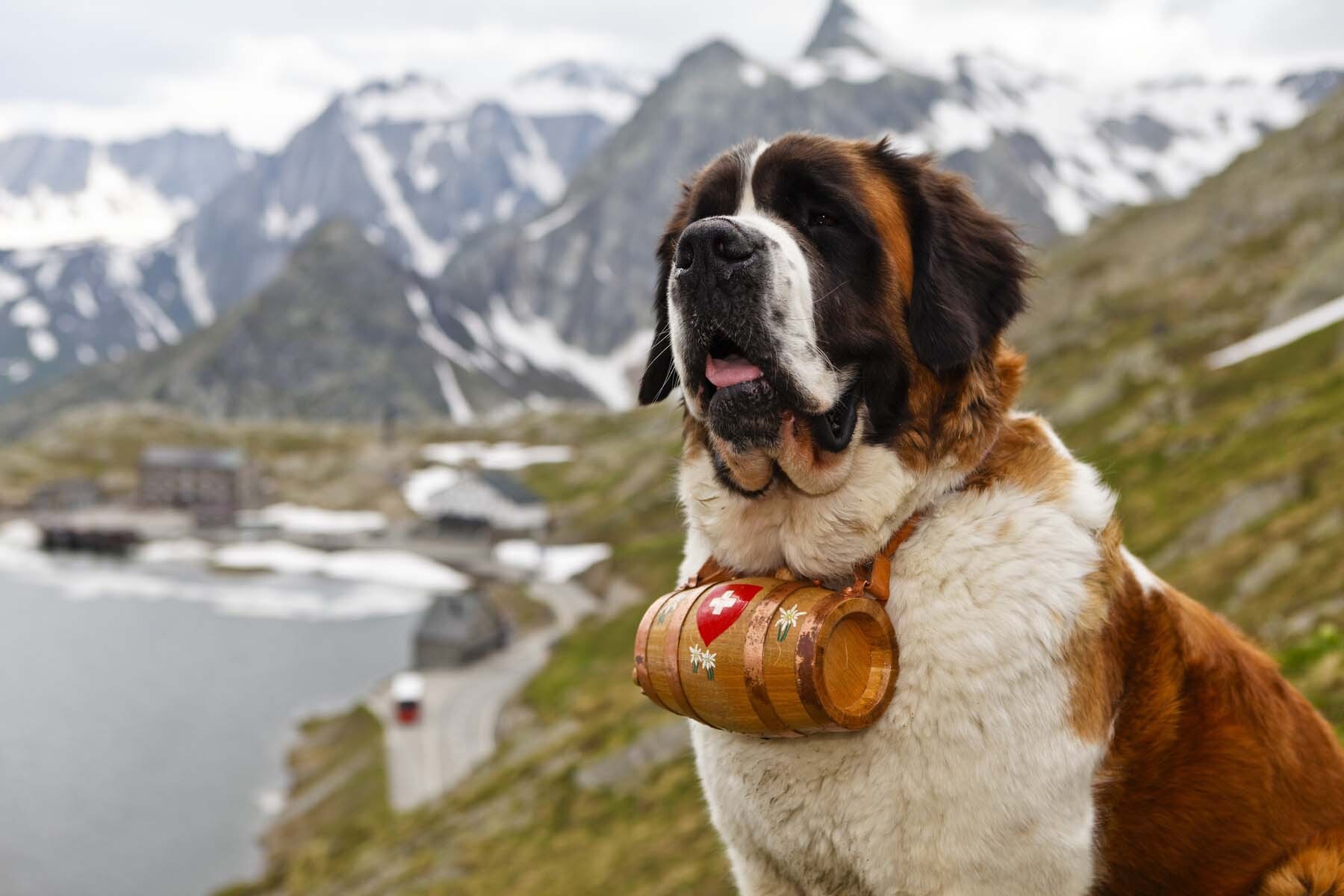 Switzerland has some of the most stringent animal ownership laws in Europe. For example, it is illegal to keep just one social animal, such as a guinea pig, mouse, or fish because keeping these alone is deemed animal abuse. Amazingly, pet-renting services also exist in case one of a pair dies and the owner wants to avoid entering a pet-buying cycle to abide by the pairing law.

Swiss laws also prohibit giving your child a name that could damage their future interests. This includes giving them brand names and place names, as well as biblical names derived from unsavory characters, such as Judas or Cain. For more information about bringing up kids in Switzerland, read our complete guide to Swiss parenting.

24. Sundays are a big deal in Switzerland…

If you live in Switzerland, then don’t expect to get too much done on a Sunday, as many everyday activities are actually prohibited by law. This includes mowing the lawn, doing any noisy DIY, and even hanging out your laundry. And it’s not just Sundays that are protected. Another of our favorite Switzerland facts is that making too much noise between 22:00 and 06:00 is also forbidden during the week. 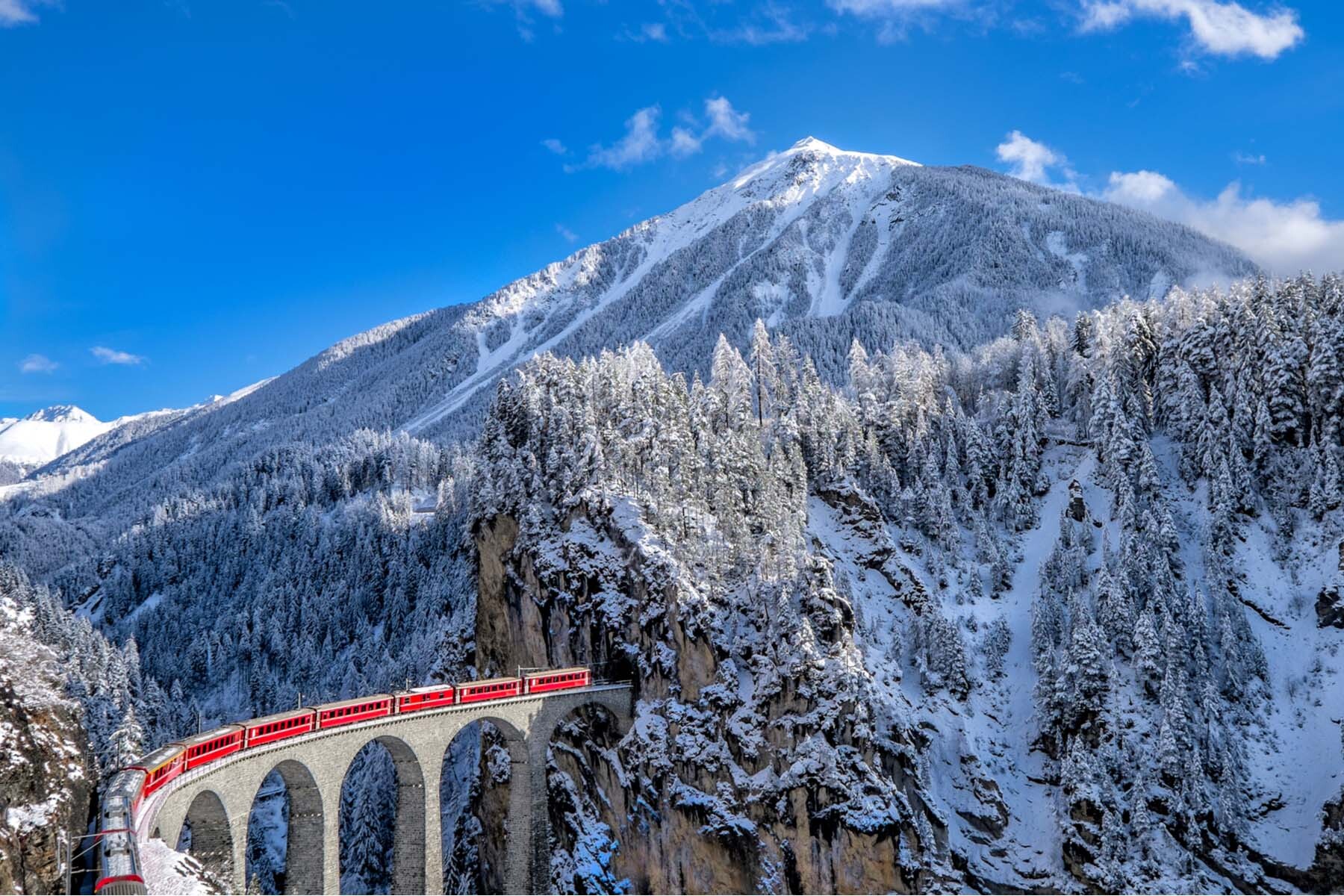 With so many picturesque lakes dotted throughout Switzerland, you might not be surprised to discover that the Swiss love their hydroelectric dams. Around 60% of Switzerland’s energy production comes from these stunning feats of engineering. So if you’re looking to connect to these green energy sources, then be sure to read our guide on connecting to Swiss utilities.

If you’re a fan of riding the rails, then you’ll soon come to love just how dependable the Swiss train system is. In fact, Swiss trains are among the most efficient – and well-patronized – in Europe. However, all this efficiency comes at a price. Find out what you could be paying with our guide to public transport in Switzerland.

Ready for breathtaking landscapes to slide past your window with every journey? Then you’re in luck because Swiss train routes are some of the most scenic in the world. Make sure you check out the journey up to Jungfraujoch, Europe’s highest station which sits at an eye-watering 3,454 meters above sea level. There, you can lap up spectacular views from a popular observatory and enjoy plenty of mountain fun.

28. The Swiss love their chocolate… 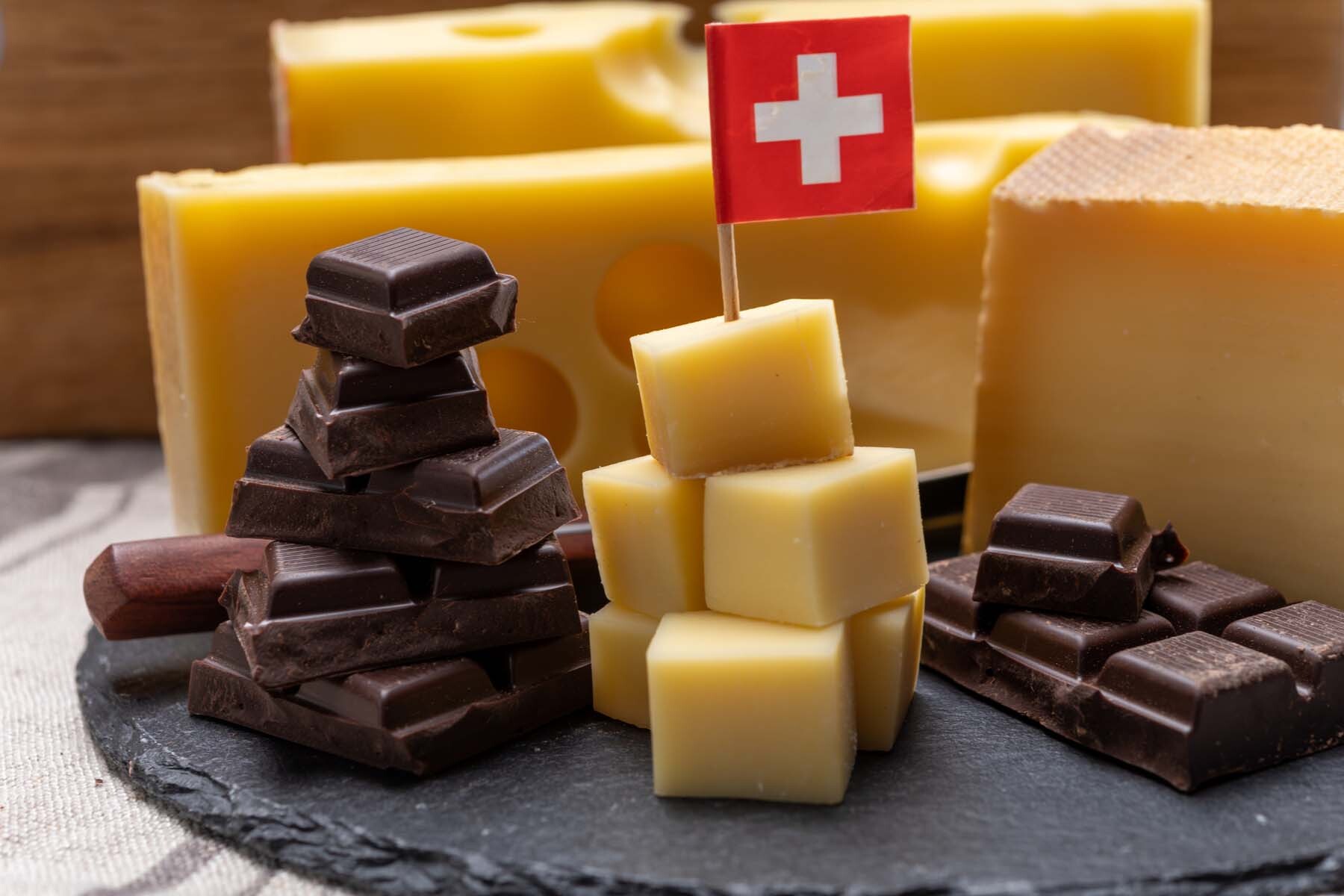 Now, here’s a delicious fact about Switzerland. As every chocolate-lover knows, the Swiss produce some of the world’s best chocolate. In fact, chocolate is a major Swiss export, with over 122,000 tonnes of the stuff heading abroad in 2018 alone. However, the locals also love their chocolate, which is why they have spent centuries perfecting the intricate art of the chocolatier.

Our list of fun Switzerland facts wouldn’t be complete without mentioning cheese. The Swiss love their cheese; from hearty slices of Emmentaler and Appenzeller tucked into sandwiches to the rich, creamy goodness of the iconic cheese fondue. So if you’re looking to impress friends and family alike, then why not bring the magic of fondue home with our guide.

If you’re considering moving to Switzerland, then you shouldn’t need to think about it for too long. After all, Swiss cities like Zurich and Geneva regularly appear near the top of “most liveable cities” lists, thanks to their high quality of life, low crime rates, and fresh mountain air. And if that isn’t enough to persuade you, then why not check out our guide to the 10 best places to visit in Switzerland?

10 Off The Beaten Path In Switzerland For Solitude Seekers

The 13 Prettiest Towns in Switzerland

1 thought on “30 surprising facts about Switzerland”