Little landlocked Austria is known for its breathtaking Alpine scenery, rich history and oodles (and strudels!) of culture. There’s so much to learn about the rise and fall of the Austrian-Hungarian Empire, Austria’s role in the World Wars, as well as how the country produced so many great classical composers! It is always interesting to learn facts about countries you will visit such as Facts about Canada and Fact about Italy.

From Baroque architecture to tasty wiener schnitzel, the bustle of Vienna to the flowing waters of the Danube, a turbulent history to a neutral and peaceful present – here are 28 fun facts about Austria to know before your trip. It comes from the Germanic word “Austro,” or Old High German Ostarrîchi, which meant the “eastern realm.”

Austria opted into the European Union in 1995 (and adopted the Euro as its currency in 1999), but not the North Atlantic Treaty Organization, which maintains foreign relations with non-member countries around the world.

Other EU member states that chose not to join NATO are Finland, Ireland, Malta, and Sweden. Instead, they joined the Partnership for Peace programme to avoid alignment with military alliances.

This is a compulsory six-month course of training that all male citizens of Austria between the ages of 17 and 51 must complete by law.

Austria recycles around 63% of its waste, which is one of the highest percentages on the continent.

Austria has a strong work ethic, as evidenced in the average workweek: 45 hours. This is the longest work week of any European country. 6. Enjoy your Austrian cup of coffee at 3 pm…

Coffee houses are important staples of Austrian culture, where people meet for business or socializing. Austria’s relationship with coffee started around the 17th century, when the Turks retreated from the land, leaving behind their coffee beans.

The daily “jause” coffee break takes place at 3 pm and consists of a cup of Joe, plus a cake or pastry.

7. …Or head to the Heuriger for something stronger

The Heuriger is another popular gathering place for Austrians. It’s a kind of wine tavern where people come to talk and drink. Buffets of hot and cold food are usually served, plates of which you can nibble at as you enjoy your wine and the good company. 9. Vienna is home to the oldest zoo in the world.

Tiergarten Schönbrunn (Animal Garden) was founded in 1752 and started out life as an imperial menagerie (a collection of captive animals kept on display). Today, the zoo focuses on science and conservation, though some of the original Baroque-era buildings are still used.

The Austrian National Library, situated in Vienna, is considered one of the world’s major libraries. The building dates back to 1726, but some of the tomes date back to the 14th century.

Well, technically Josef Madersperger is one of many “inventors” of the sewing machine, having worked on several versions to try and emulate hand sewing. His efforts were unsuccessful, but his designs helped pave the way for improvements, which resulted in the sewing machine we know and use today.

The waltz dance was created in the suburbs of Vienna during the 17th century and caused a lot of controversy in high society, due to the closeness of the dancers and the shameless whirling movements!

Austrian entrepreneur Dietrich Mateschitz was first inspired to create an energy drink when he tasted an existing energy drink named Krating Daeng, from Thailand. He changed the ingredients to appease the Western tongue and Red Bull was born… or perhaps, stolen.

Krating Daeng also means “red bull/bovine animal” and both logos feature the red bull and a yellow sun. Today, Red Bull is the most popular energy drink consumed in the world and “Red Bull gives you wings” is one of the most recognizable slogans. The famous bodybuilder, Hollywood actor and former governor of California, Arnold Schwarzenegger was born in the small village of Thal, in the Austrian state of Styria. He moved to the United States in 1968, at the age of 21. He spoke little English, but his accent is now mimicked all over the globe.

Born in Vienna in 1956, Christopher Waltz (unrelated to the Austrian invention of the same name… supposedly), is a German-Austrian actor and director. He’s most famous for his breakout role as an SS officer in Quentin Tarantino’s Inglourious Basterds and as Blofeld in the James Bond movie, Spectre.

The founder of the famous Porsche sports car brand was born in northern Bohemia in 1875, which at the time was part of Austria-Hungary, but today is part of the Czech Republic.

Born in Freiberg, Moravia (which was part of the Austrian Empire at the time, but is now part of the Czech Republic), Freud was a famous neurologist and noted as the founding father of psychoanalysis. Today, you can visit his house and office in Vienna.

Austria has a reputation for producing world-class classical composers, including Wolfgang Mozart, Johann Strauss, Joseph Haydn, Franz Liszt, and Franz Schubert. There must be something inspiring about all that Alpine scenery.

Possibly the second-most-famous Wolfgang in the world after the aforementioned Mozart, Austrian Puck is one of the highest-earning chefs in the world. He was born in the town of Sankt Veit an der Glan in the Austrian state of Carinthia, in 1949, and moved to the United States when he was 24.

Sadly not one Austrian to be proud of, Hitler was born in Braunau am Inn in Austria in 1889. He later relocated to Germany in 1913. 22. Oetzi the frozen Stone Age man was discovered in Austria

Encased in a glacier in Austria’s Oetz Valley, it’s estimated that Oetzi died around 5,300 years ago at the age of 46. He is one of the best-preserved Stone Age men in the world.

23. Austria was once the greatest power in Europe

Austria was the center of the Austro-Hungarian Empire and was the most influential European power in the 17th and 18th centuries. However, Austria was reduced to a small republic after its defeat in World War I in 1918 (to a size similar to the US state of Maine), which caused decades of turbulence.

Austria was a free and independent nation after 1918 but was incorporated into Nazi Germany during the Second World W.a.r, in 1938. The country regained independence on 26th October 1955 and has celebrated the date ever since, swearing itself to a neutral position moving forward. 26. Austria is big on protecting its nature

One-third of Austria’s forests are protected for conservation.

27. The largest ice cave in the world is found in Austria

Stretching for over 26 miles, the Werfen cave holds the title of being the biggest ice cave on the planet.

28. Austria is on the route of the Danube

Austria’s most major river is the Danube, which is also the second-longest river in Europe (after the Volga in Russia), flowing over 2,880 kilometers from Germany to the Black Sea.

The Danube holds the record for the river that flows through the most countries: Austria, Bulgaria, Croatia, Germany, Hungary, Moldova, Romania, Serbia, Slovakia, and Ukraine.

Although Austria is a relatively small country, it shares its borders with eight others: Switzerland, Slovakia, Slovenia, the Czech Republic, Hungary, Italy, Liechtenstein, and Germany.

30. Austria is home to one of the oldest amusement parks in the world

Wurstelprater can be found in the Viennese district of Leopoldstadt and dates back to the Austrian Empire, opening in 1766. The most famous attraction is the Wiener Riesenrad, which is a Ferris wheel. 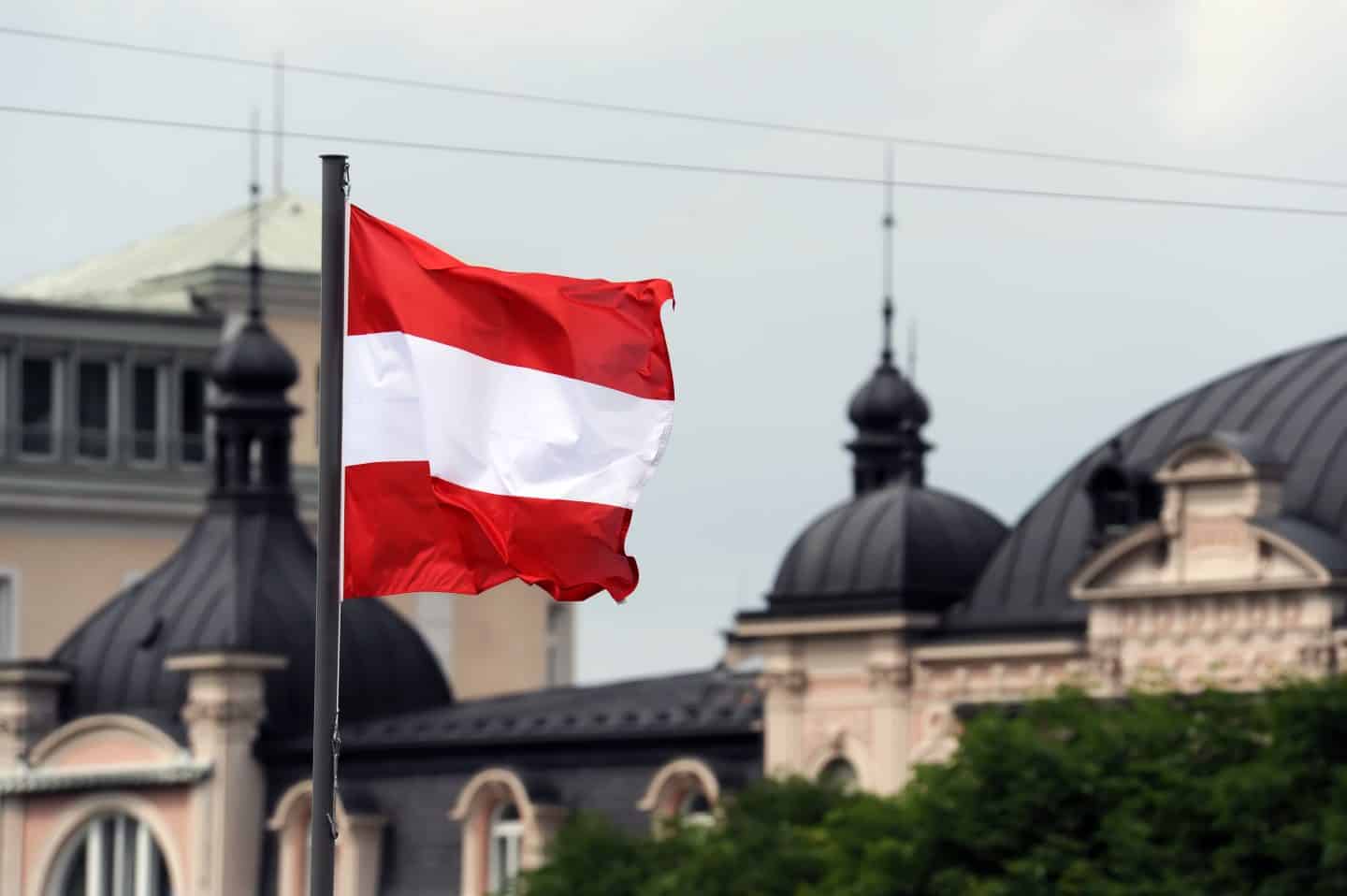 31. The Austrian flag is one of the oldest flags in the world.

It’s also one of the most unique. When citizens fly the flag, you’ll see the three horizontal stripes of red, white and red. However, when the flag is flown by the government, they use a version with an eagle and a coat of arms in the center. 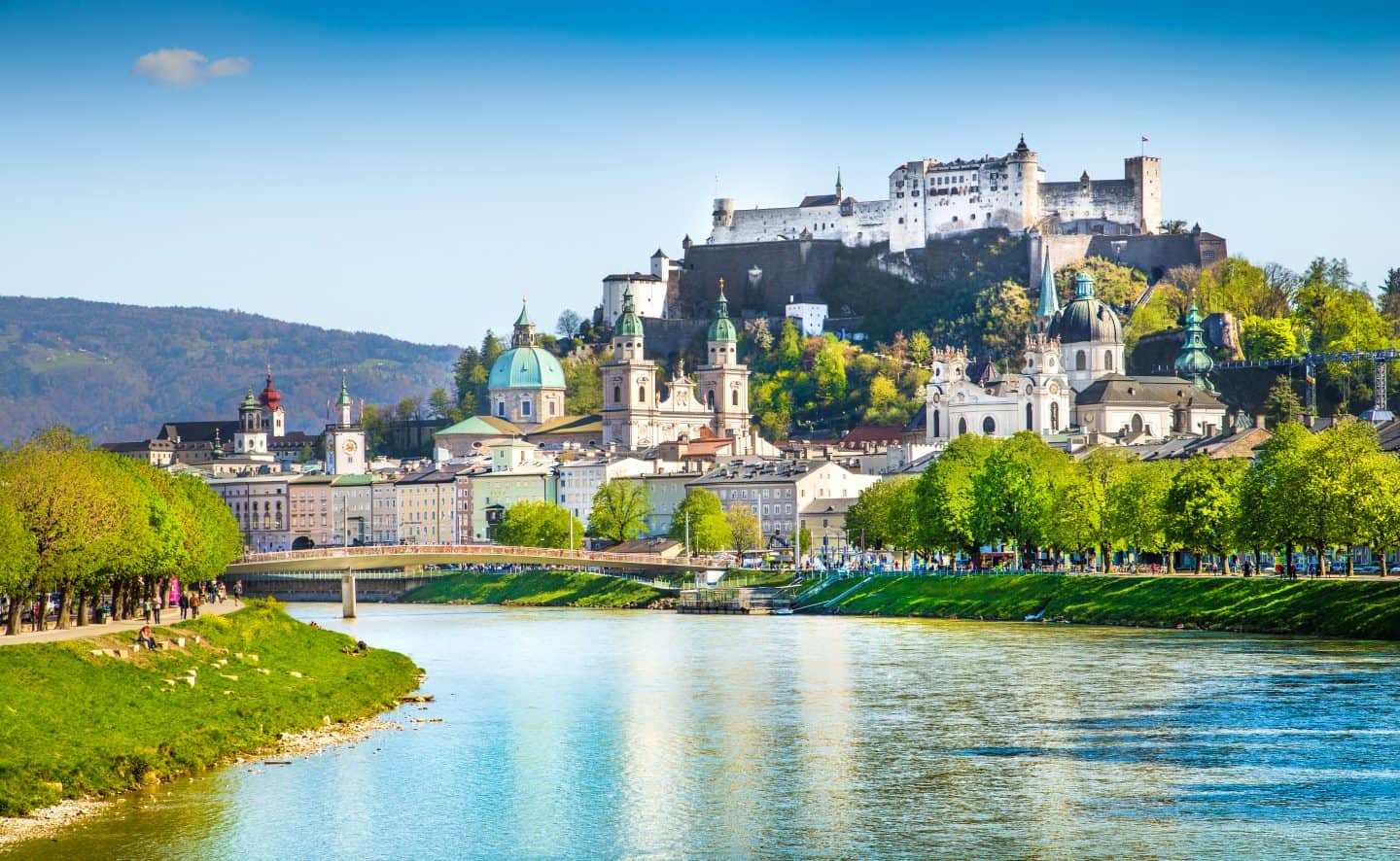 Facts About Austria: The Biggest Cities in Austria 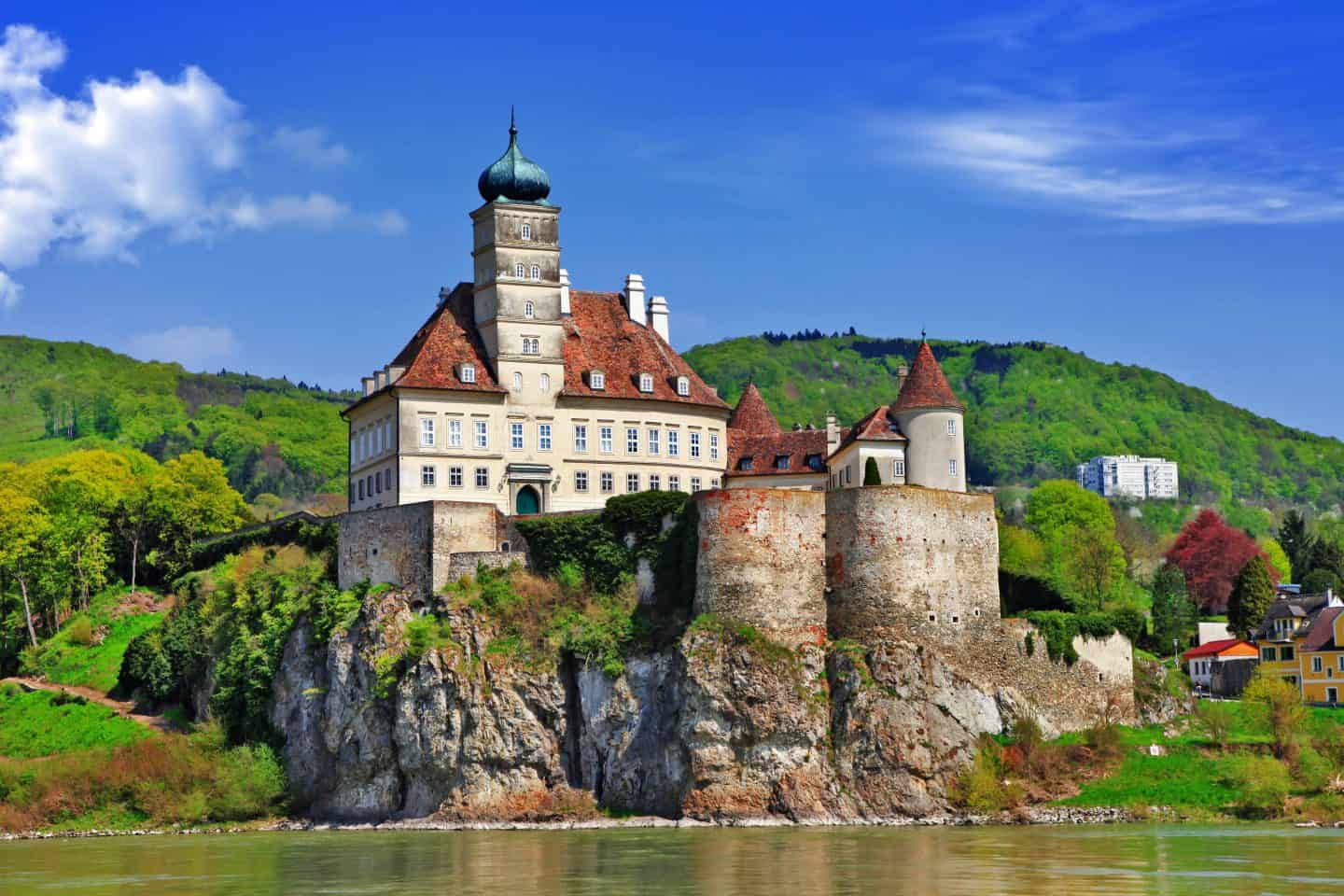 33. The official language of Austria is Austrian German

Most Austrians speak Austrian German, with the exception of some elderly residents who live in rural areas. However, many other languages are spoken in the country.

Alemannic dialects are spoken in the west, as well as northern Switzerland, and can be very difficult for other people to understand, even though they stem from German.

Other minority languages spoken in Austria include Turkish (2.3%), Burgenland Croatian (2.5%), Hungarian (only around 1,000 speakers, despite the important historical and cultural link between Austria and Hungary), Serbian (2.2%), Slovene (0.3%), as well as English, French and Italian as foreign languages. 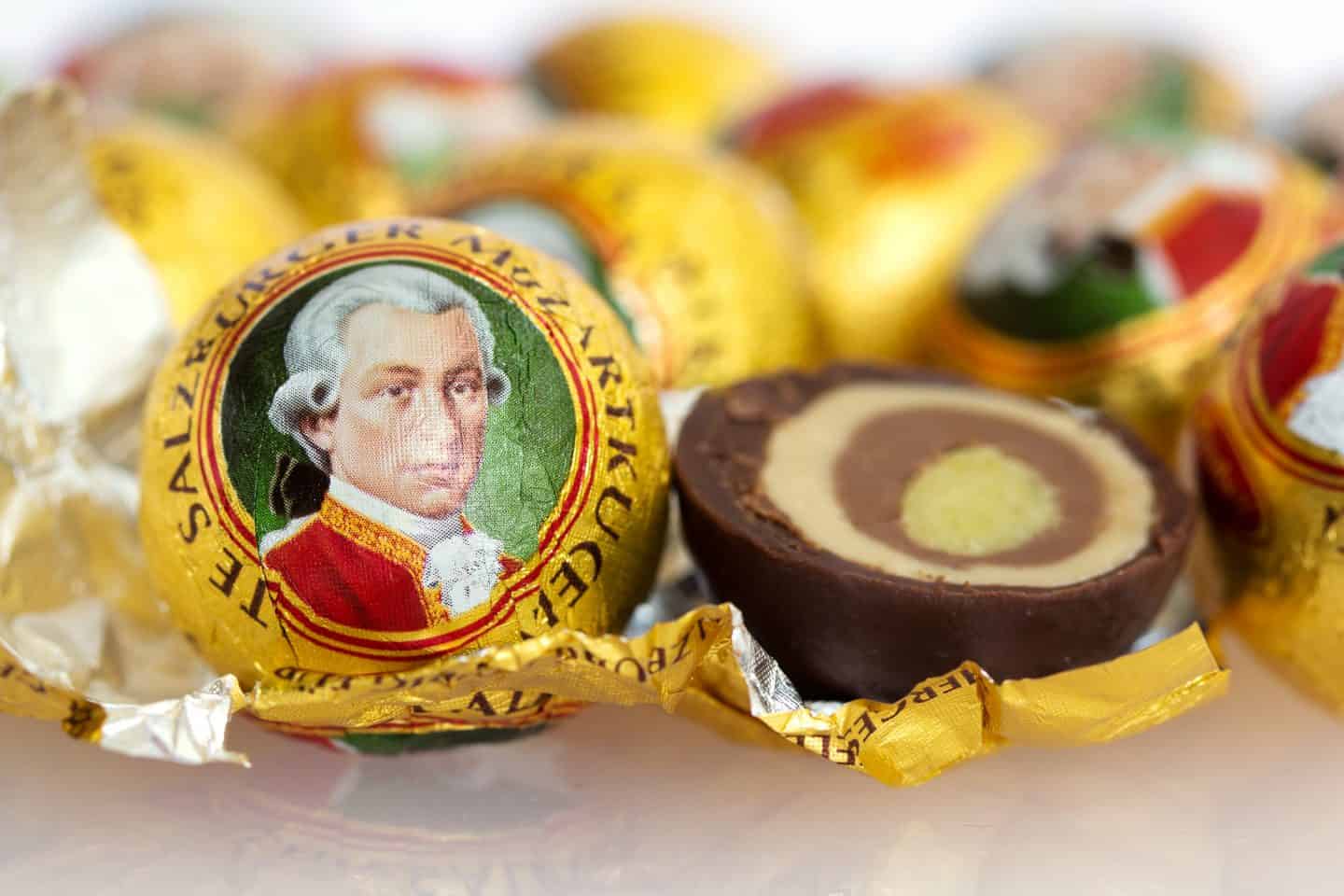 34. You can eat Mozart chocolate in Austria

Austrians are so proud of their greatest export, Wolfgang Mozart’s incredible music, that they created a type of high-quality chocolate in his honor.

Yes, you read that correctly. When you’re toasting your glass, make sure you maintain strong eye contact. If you don’t, Austrians believe it’s bad luck and you could suffer up to seven years of bad s.e.x as a result! 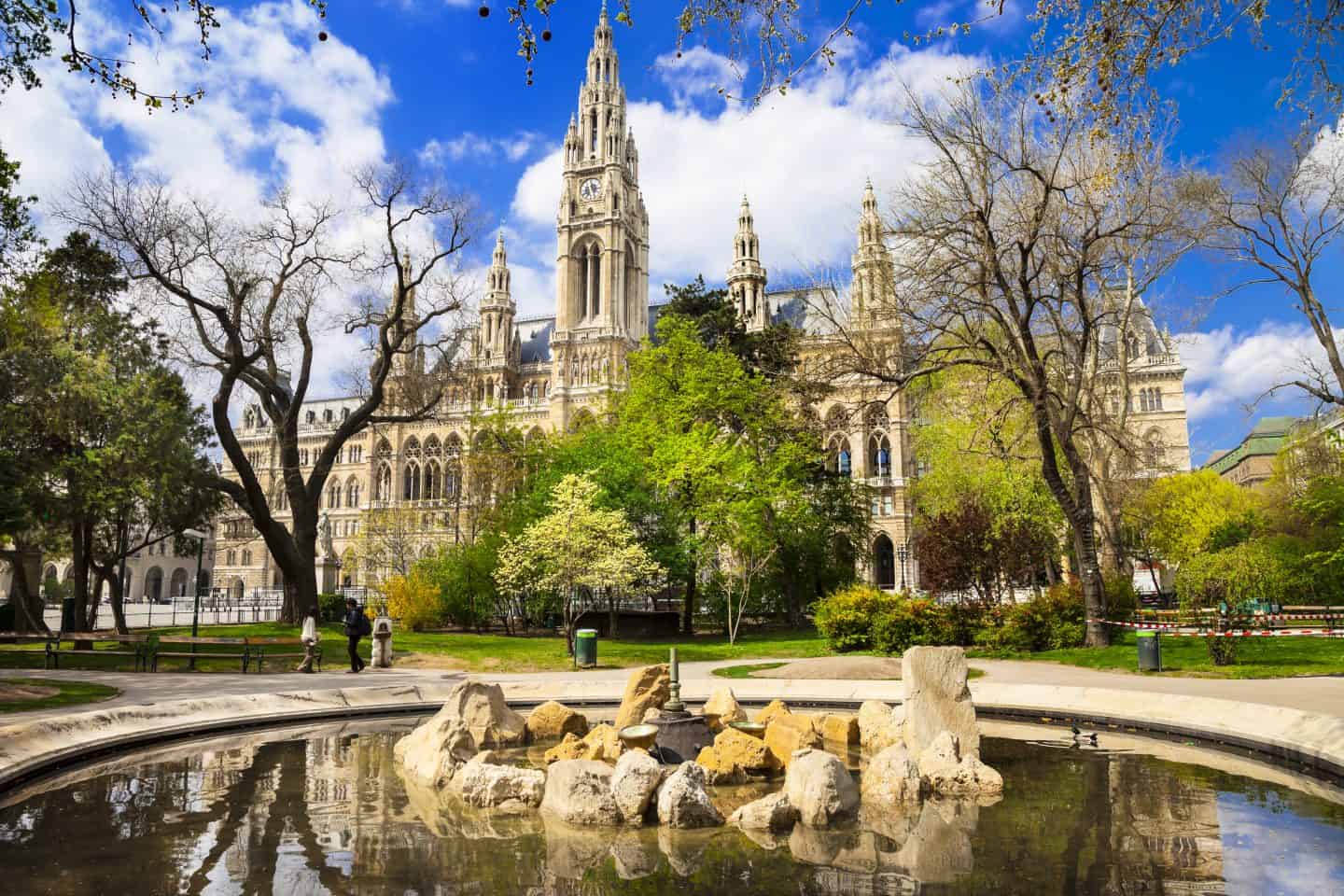 Any fun facts about Austria missing from the list above? Or are there any Austrian facts you just read that shocked you or made you laugh? Let us know your favorite interesting fact about Austria in the comments below and enjoy your trip to Europe!

This post is part of a series of fun facts about a destination. These posts are research-based but if you have found an error or would like to add a fact, please let me know at dianashealthyliving [at] gmail.com. Thanks!

Austrian Food: Mouth-watering dishes that are a must in Austria!