Simply put, Hawaii in the 1960s was the place to be. The newest addition to the US, Hawaii fascinated Americans with its tropical temperatures, crystal blue waters, and rich culture.

Naturally, vacationers flocked to the state, as did many celebrities and politicians. Elvis Presley gave the island a popularity boost after filming “Blue Hawaii” in 1961, and as surf culture began to take the nation by storm, so did the state.
Keep scrolling to see some classic photos of Hawaii during its ’60s heyday.

Hawaii was granted statehood in 1959, and vacationers began to flock. 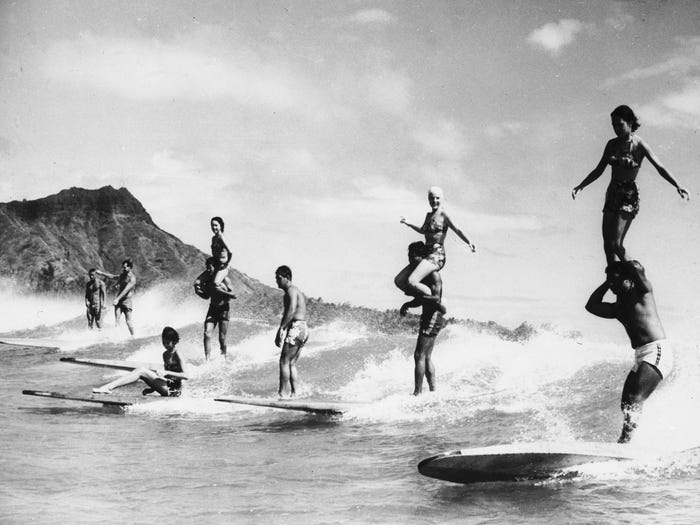 Hawaii became a tourist hub in the 1960s and people flocked to the new and exotic state for vacation. According to the Smithsonian, “travel boomed in the subsequent decades” following World War II, especially “thanks to lower prices, new routes, more efficient aircraft.”

Americans romanticized Hawaii and all it had to offer. 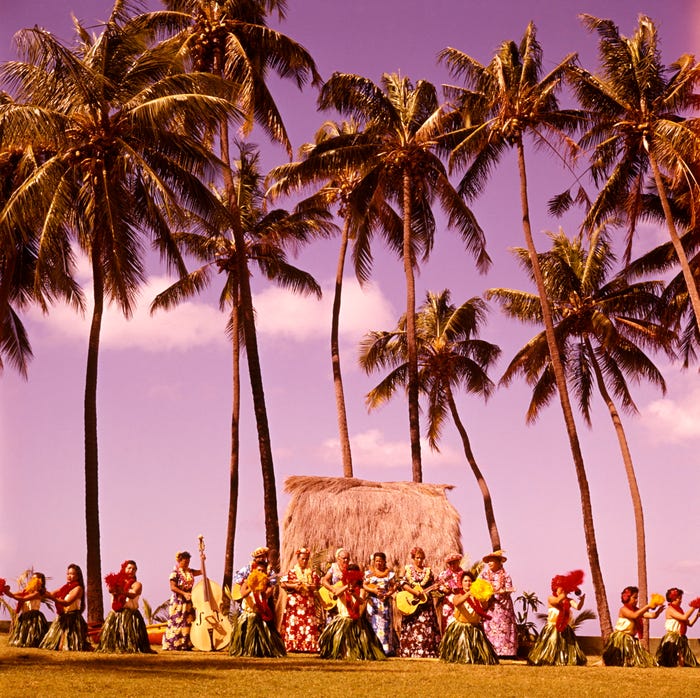 According to Huff Post, throughout the decade “a romanticized idea of Hawaii spread like wildfire, complete with tiki torches, bright aloha shirts and beautiful, tanned hula dancers.”

And surfing was the activity du jour. 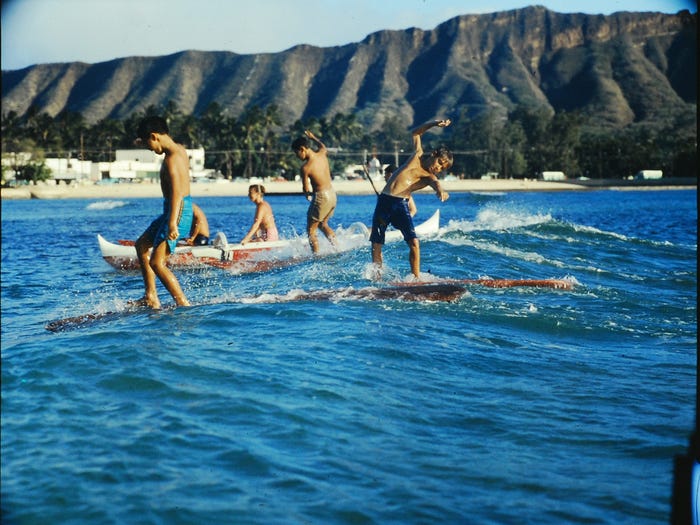 Surfing has ancient Polynesian roots, but many Americans were unaware of the sport until the ’60s. The surf culture explosion of the decade had a lot to do with the Beach Boys’ 1962 hit “Surfin’ Safari.”

This couple decided to brave the waves of Waikiki in 1962. 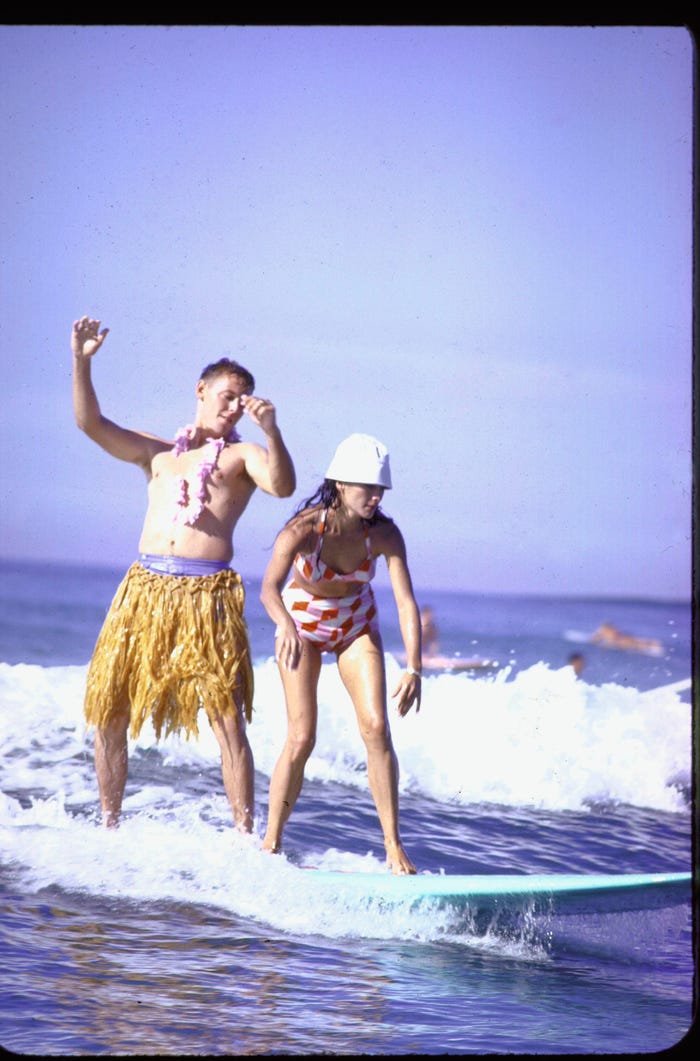 The clear waters of Oahu made for ideal surfing conditions. 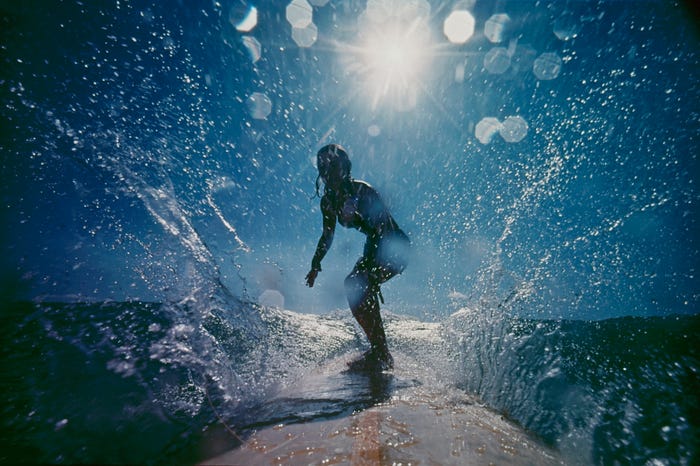 To this day, the surfing in Waikiki is world-renowned, and the beach even offers lessons. 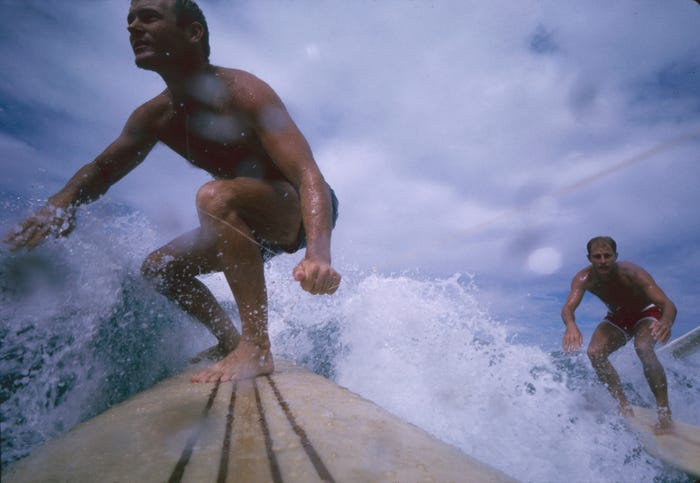 Since the beach waters are super gentle, surfing is easy to learn along the coast of Oahu.

Pearl Harbor was also a big draw for tourists. 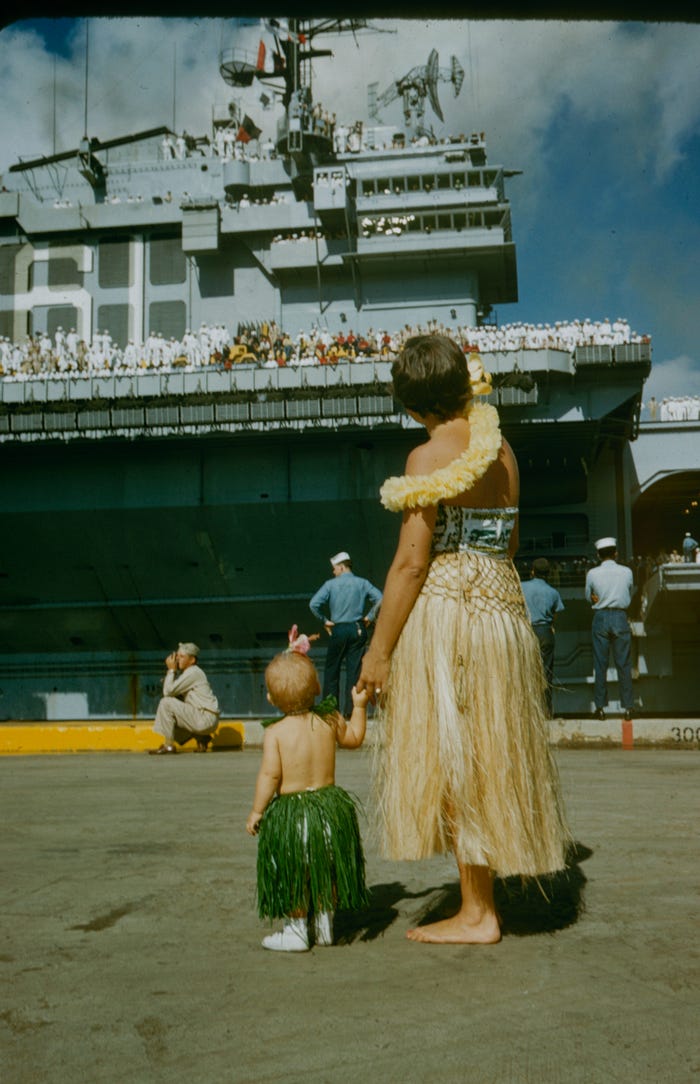 You can still tour the historic site today.

Hawaii was beloved for its natural beauty and exotic vegetation. 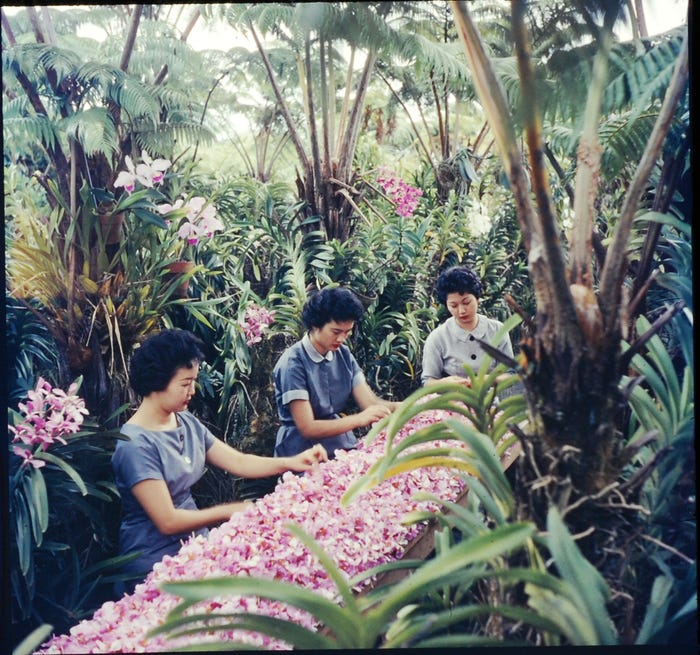 It’s also an island with a rich history. 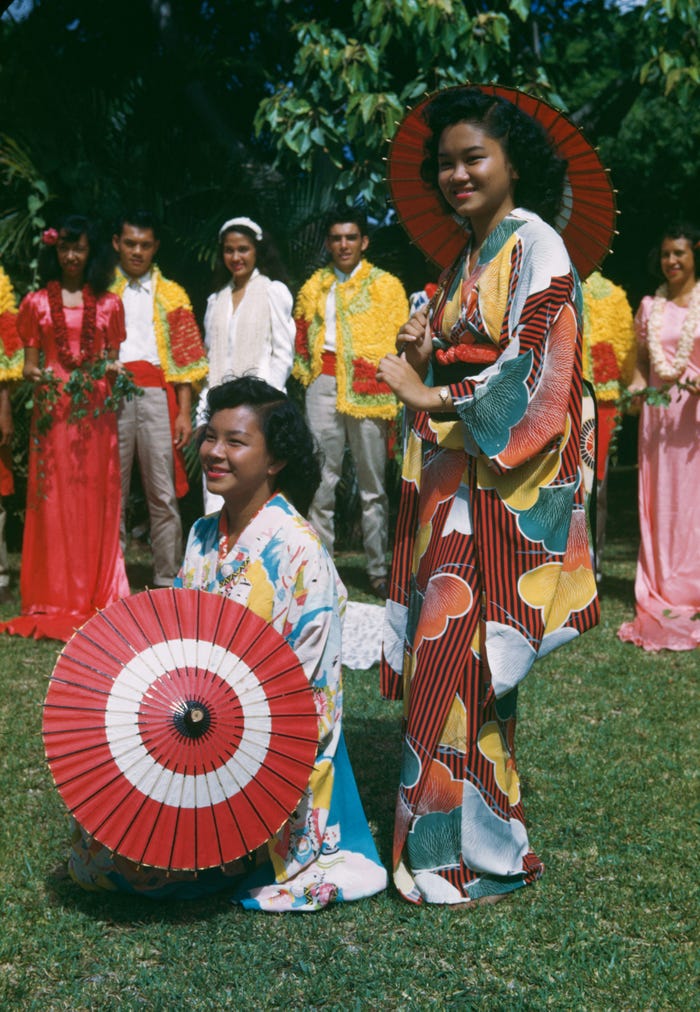 To honor the history of the island, Hawaii has celebrated Aloha Week since 1946. In 1991, Aloha Week became Aloha Festivals — a statewide celebration with over 100,000 attendees on the island of Oahu. Here, two women are pictured at Aloha Festivals in Hawaii circa 1960.

The views from Waikiki Beach were stunningly blue. 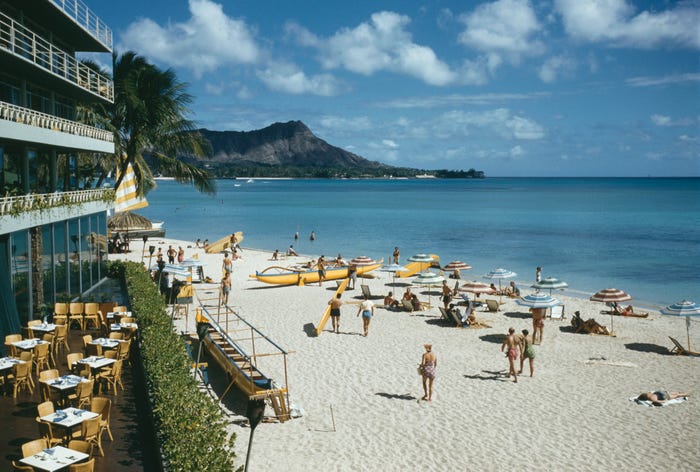 Sunbathing (shown above) is still a popular activity.

Elvis Presley also drew attention to the state after filming “Blue Hawaii” in 1961. 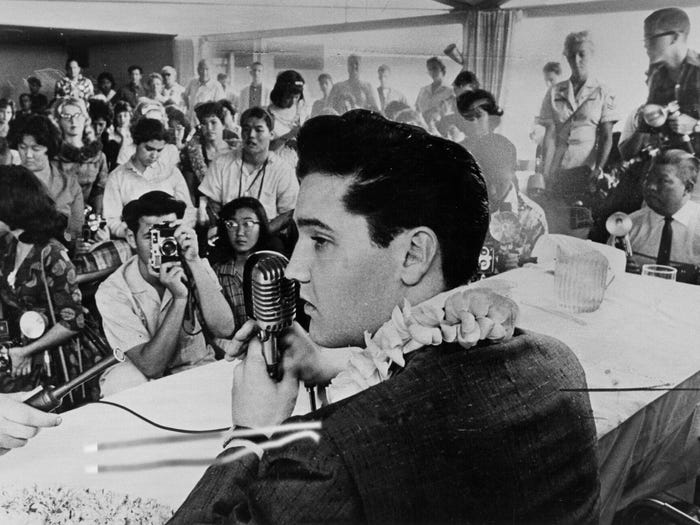 The King of rock ‘n’ roll was also largely responsible for the Hawaiian zeitgeist of the 1960s. Elvis Presley filmed the popular film “Blue Hawaii” on the islands of Oahu and Kauai in 1961, and it quickly became one of the superstar’s most successful forays in film. The soundtrack went Gold in 1961, and features the now-standard “Can’t Help Falling In Love.”

Other stars, like Don Ho, came out of Hawaii. 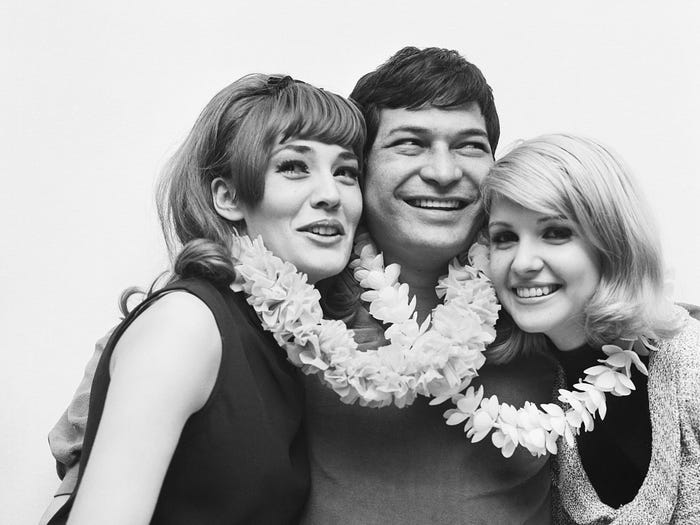 Don Ho was one of Hawaii’s most popular entertainers with a string of successful albums in the 1960s. Ho had fans worldwide and made many TV appearances throughout the decade.

The Beach Boys took their surf inspiration to its source in 1967. 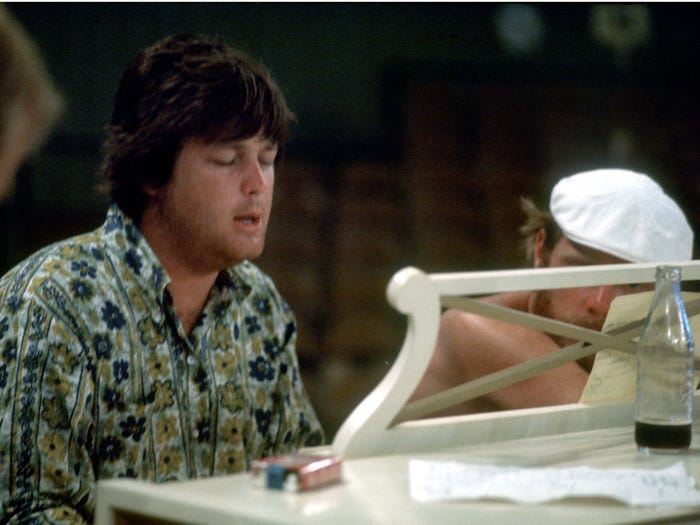 Here, the legendary band is rehearsing for a performance at the Honolulu International Center.

Visitors loved to soak up the local culture — including hula dancing. 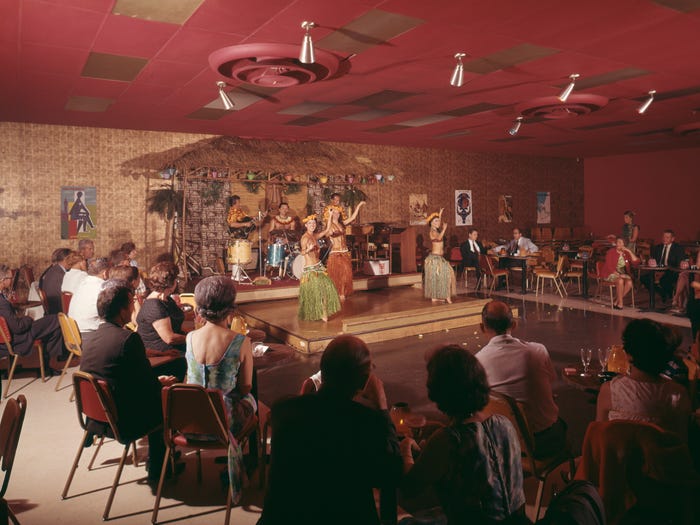 Guests at the Hawaiian Village Resort in 1960 are watching a traditional hula dance in the hotel’s lounge. 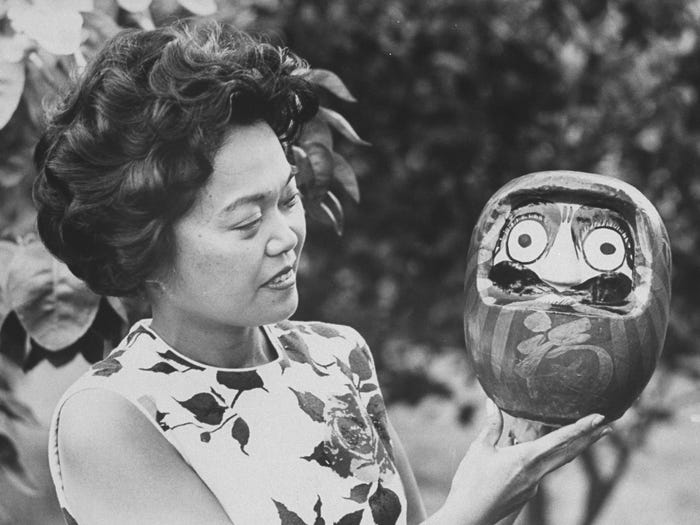 Hawaiian Patsy Takemoto Mink made history when she was elected to the House of Representatives in 1964: she became the first woman of color elected, and the first Asian-American congresswoman. 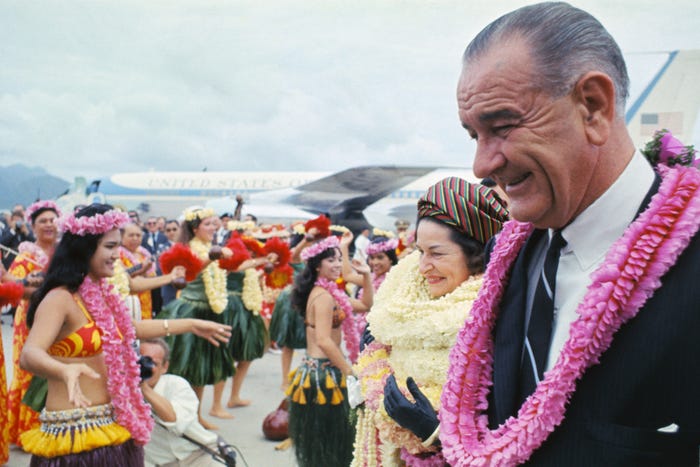 President Lyndon Johnson and his wife, Lady Bird, in Hawaii in 1966. Bettmann/Contributor/Getty Images

President Lyndon Johnson arrived on the island in October 1966, and he and his wife were greeted with leis.

Airport welcomes were customary, and they still are. 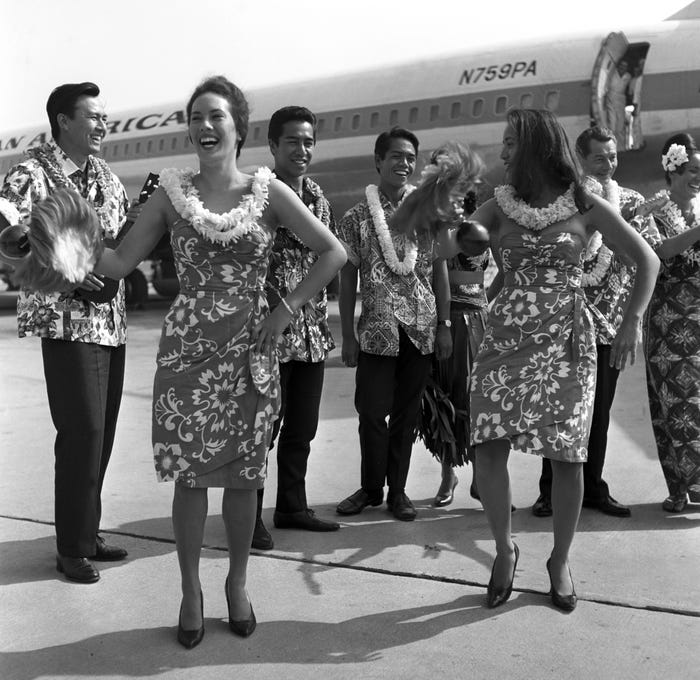 Dancers Rose Marie Alvaro and Priscilla Leggett showed their skills — and colorful dresses — on the tarmac in 1964. 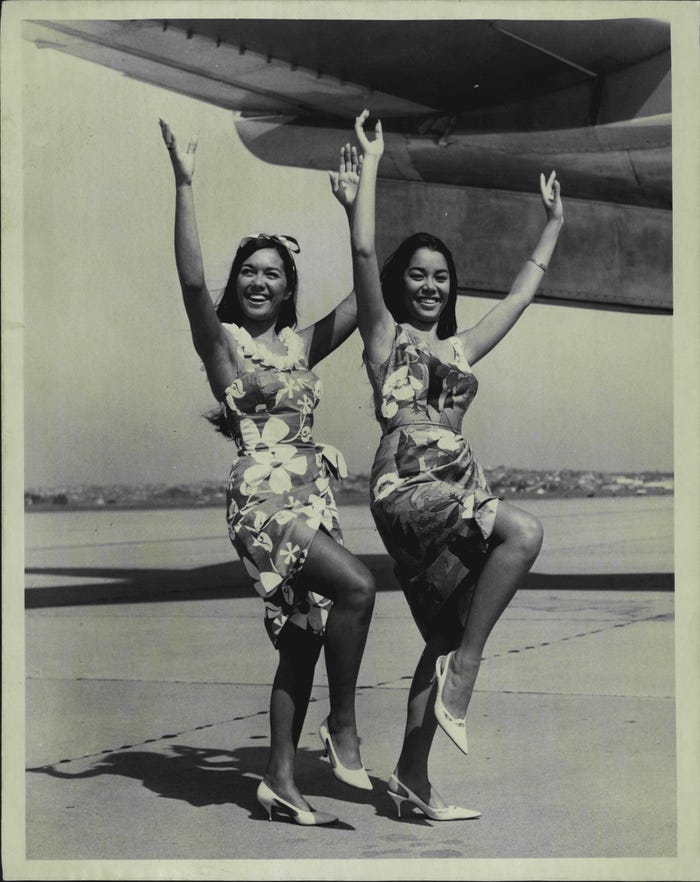 Alvaro also appeared in an episode of Hawaii Five-O. 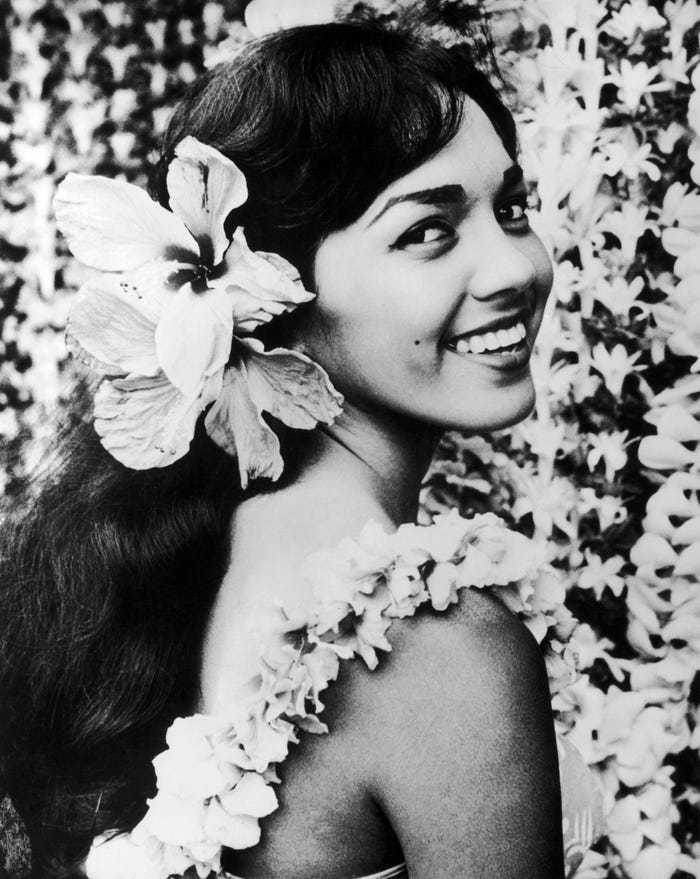 She was a poster girl for the Hawaii Visitors Bureau. 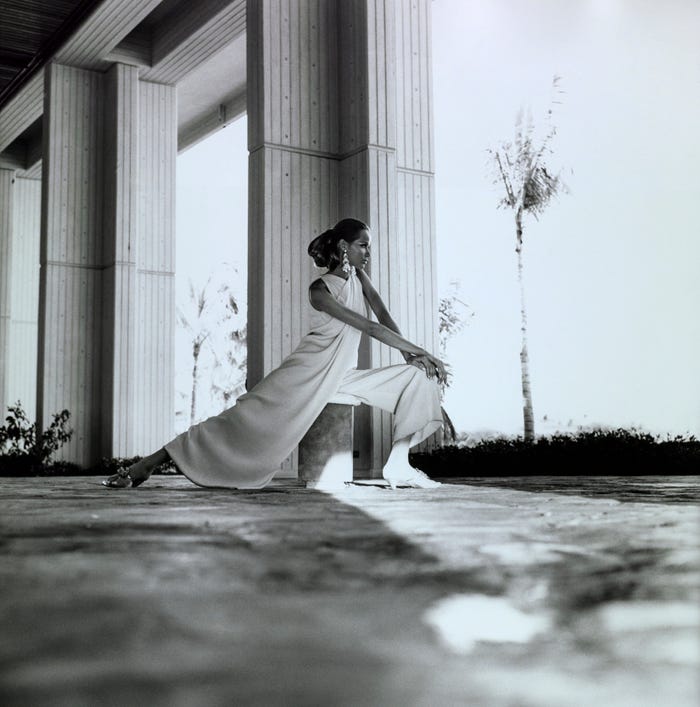 The beach provided a stunning backdrop for photographs. 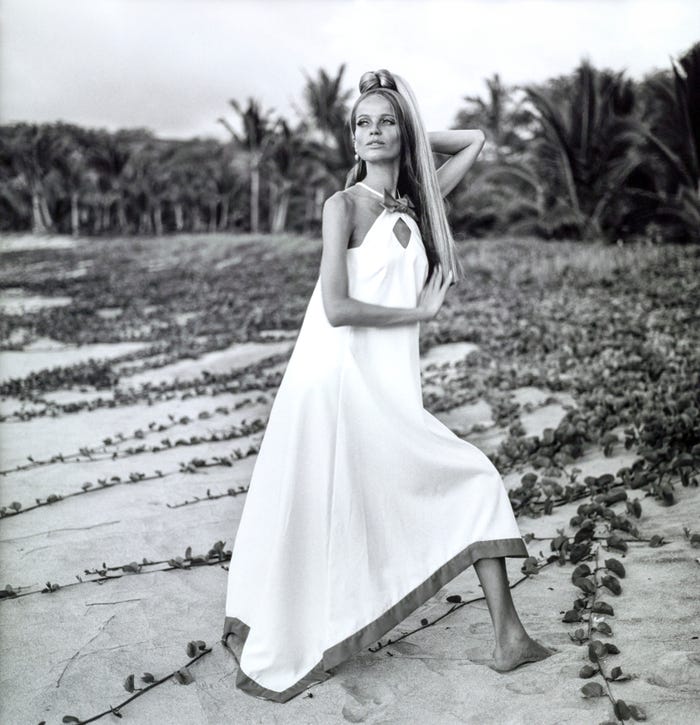 Hawaii even inspired the fashion itself. 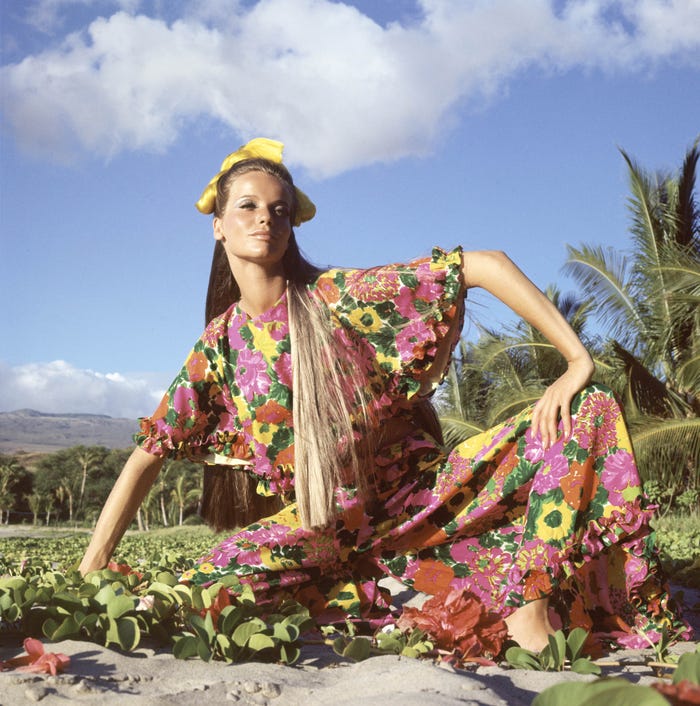 In this photo, Veruschka von Lehndorff sports a sarong pajama set designed by Sun Fashions of Hawaii in 1966.

At the end of the day, nothing beats Hawaii’s unique charm. 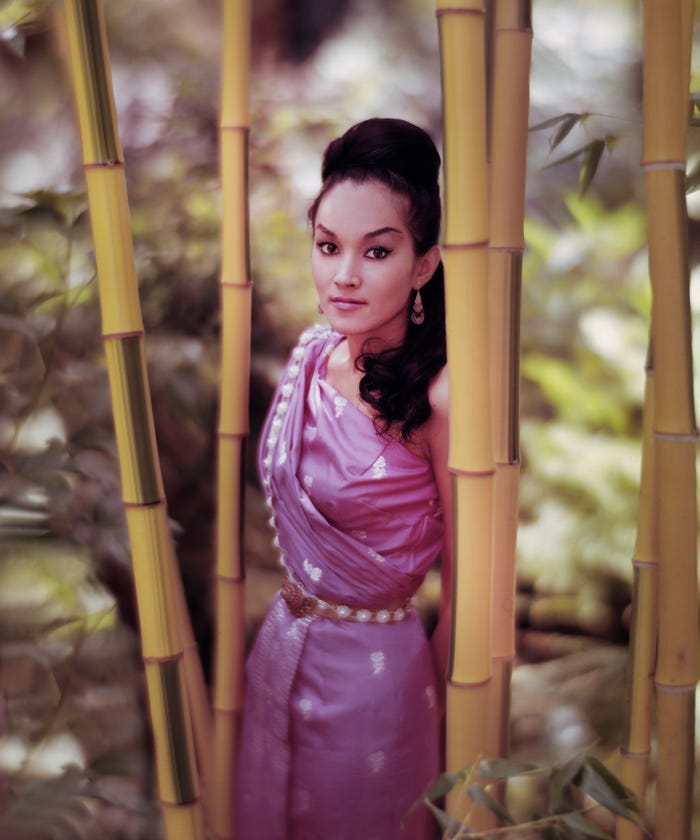