Tulip fields, Amsterdam, and beautiful waterworks are what the Dutch are well-known for. However, there’s more to the Netherlands than walking the streets of Amsterdam and taking a tour of the museums here—there’s more to it than these, and that is why Holland is one of the happiest countries in the world. Not only is there an abundance of tourist destinations, but there are also many hidden gems in the Netherlands.

Here is a list of the hidden gems in the Netherlands that you should definitely visit when you’re here. Off the beaten path, you go, and you’re in for incredible discoveries that will make you appreciate more this side of the world. Are you ready to discover all the offbeat places in the Netherlands? If San Francisco has the Alcatraz island, so is the Netherlands. Pampus is in the IJmeer near Amsterdam, which has a similar structure as San Francisco’s Alcatraz, which is also set on an island. The island is a UNESCO World Heritage site, which was once a part of the Defense Line of Amsterdam. In the 19th century, as part of the Defense Line of Amsterdam, the island had two colossal cannons on the ramparts. It used to defend the city by flooding.

Even before the island was built as a part of the Defense Line, the sandbank played a pivotal role in Dutch’s history as it is where trading ships would anchor.

Now, the fortress island is a tourist attraction. If you’re in Amsterdam in May, you might want to catch the Pirate Week in Pampus. Additionally, there is an annual kite festival in June on the island. Take pleasure in over 180 kites on the beach. Located in the far north-east of the Netherlands, you will find the mysterious polders of Groningen. Make sure you try to get here during the early morning because the fog will make you feel like you’re in a different world. When the fog clears, you will see a beautiful landscape with Dutch windmills. It’s a fairytale.

Located in Jordaan, Amsterdam, it’s difficult to see these tiny houses (more like dollhouses!), but they do exist! The houses are hidden within the crack next to the number 54 on Westerstraat. These houses are in-between two houses. The reason behind the houses placed in-between two houses is to make a statement when the courtyard located behind the building was removed to make way for more homes. In the middle of a forest clearing in Apeldoorn sits an old radio station. Radio Kootwij was built in 1923 to emit radio frequencies between the Netherlands and Indonesia. However, after five years, the building was abandoned. You can enter the building and learn how radio broadcast was done back in the days. While you’re here, you have a chance to explore the forest and sand dunes that surround the building. Have you ever been to a star-shaped fortress? In the Netherlands, you will. Witness beautiful engineering that is frozen in time at the Bourtange in Groningen. Today, the fortress has a rural village. You can spend the night inside its fortifications as well for the whole experience. Don’t worry, though—the area has been updated to provide guests a comfortable stay. The fortress was built to control the trade routes between Germany and Groningen.

PosbankHave you ever been to a star-shaped fortress? In the Netherlands, you will. Witness beautiful engineering that is frozen in time at the Bourtange in Groningen. Today, the fortress has a rural village. You can spend the night inside its fortifications as well for the whole experience. Don’t worry, though—the area has been updated to provide guests a comfortable stay. The fortress was built to control the trade routes between Germany and Groningen. See heather in the province of Gelderland, which is located in the East of Netherlands. Heather are beautiful flowering plants that are similar to France’s lavender fields. The Heather in the Netherlands only bloom twice a year starting in July. Here lies the Veluwezoom national park where you will find heather as well as beautiful forests you can explore.

So, if you have already seen the tulips fields, or you missed it, you can still take pleasure in seeing the heather. This is great if you want something different as the heather fields are truly a spectacular view.

The Caves Of Mount St. Peter 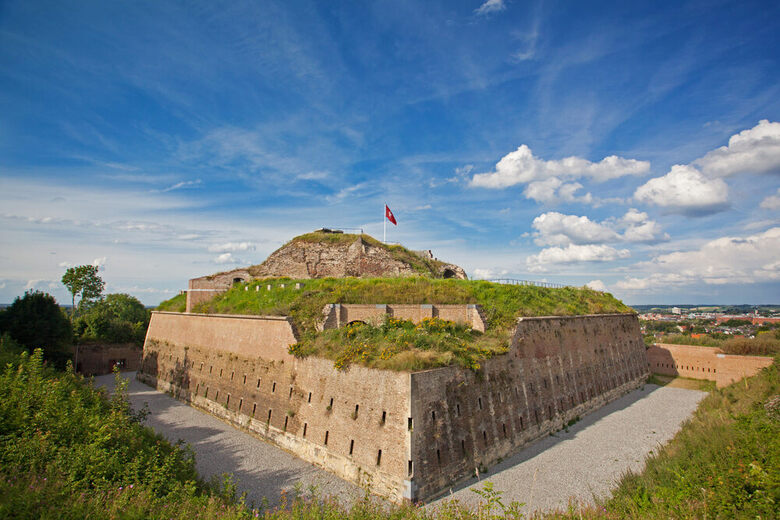 Go underground and explore the human-made caves beneath Mount St. Peter in Maastricht. Originally, they were built to extract valuable material, and they also served as a shelter to locals during wartime. These winding, underground caves are all accessible, and you will also come across a World W.a.r II-era bunker and some ancient mines. This beautiful castle is near Utrecht and was inherited by the Rothschild family in the late 1800s. If you’re a fan of castles or you want to see a real castle while you’re in Holland, this is definitely one you shouldn’t miss.

During the mid-20th century, the castle served as a “playground” for the royals as well as the affluent. Elizabeth Taylor used to come to the castle. Everybody knows the beautiful Versailles, but here in the Netherlands, you will find something similar at the Palace Het Loo. The 300-year old palace has been home to royals with a beautiful interior as well.

You can find the palace in Apeldoorn and it is now a beautiful museum. Here you can see, aside from the magnificent garden, coach stables and a collection of antique cars. You will also learn more about the history of the Dutch royal family here.

It is not only in Amsterdam where you can witness the work of Van Gogh. In Eindhoven, hop on a bike and go through the Van Gogh cycling path that lights up to display The Starry Night. It’s a different experience that you won’t get anywhere else in the world.

Glistening pebbles are ingrained into the concrete. They absorb light during the day and emit color at night. The town is meaningful for Van Gogh as he lived here for a few years and used it as a backdrop for his paintings. You can also walk on the path if you don’t feel like riding a bike. You probably have seen a lot of photos when you search for the Netherlands of a village on a canal where people need to take a boat to get from one place to another. That is the village of Giethoorn. The village is two hours from Amsterdam and is part of the Weeribben-Wieden National Park. Considered ‘The Venice of the North’, the village looks and feels like something out of a storybook. Ride the canals and see the beautiful thatched-roof farmhouses that sit on the canals.

Have you ever thought of getting buzzed with alcohol inside a monastery? You can do that here in North Brabant. de Koningshoeven Brouwerij brews beers that are managed by an order of monks. Indeed, the brewery is located inside an active monastery, but you can sample the beers at the taproom or you can dive into the Trappist history by taking a tour. Go to Henschotermeer and find the inland lake, which is surrounded by beaches and lush greenery. This is the perfect place to go to if you want to take some time at the beach. You can also find a little island in the middle of the lake that is connected by a small bridge. If you are coming from Amsterdam, this is near the city, which is perfect for a day trip. Everyone knows that Egypt has its pyramids, but so do the Dutch. Also known as the Pyramid of Austerlitz, the 36-meter high mound of earth was built in 1804 by Napoleon and is located in Woudenberg. The pyramid was modeled after the Egyptian pyramids.

The pyramid was built in less than a month but it slowly collapsed over the years until major renovation took place on its 200th anniversary. Consider this one of the strangest structures in the Netherlands as it’s planted with grass and topped with a stone obelisk. Still, the views from the top are magnificent. There are five trails you can hike, while there are three you can bike along.

The pyramid was built by King William I to serve as a monument to the Battle of Waterloo where Napoleon was defeated, while the mound marks the spot where his son was injured. Today the Pyramid serves as a national monument. If you haven’t appreciated a quay before, you will when you get to this city. A quay is a built-up bank of a harbor or dock where ships can moor. Popular for its location, which is situated along the banks of De Waal river, there are a lot of things you can do here, such as biking, walking, exploring the museums, and many more. It’s a lively city where you can fully immerse yourself in Dutch culture. Aside from exploring the city center, it’s also a great place for shopping. Only a couple of minutes away from Amsterdam, here you can see the most beautiful windmills. There are also small shops that sell stroopwafels, a wafer cookie that is made from thin layers of baked dough combined with a caramel filling, which is a must-try when you’re in the Netherlands. You will also find almost every kind of cheese here, and while you’re at it, don’t forget to visit the famous local houses, some of which serve as museums. The impressive city gate will welcome you in, which is a grand invitation that you shouldn’t pass up when you’re in this part of the world. Located in the province of Utrecht, this is a well-preserved medieval center that features narrow canals and small bridges that lead to houses. This is where you will find one of the tallest medieval church towers in the country—and you can climb it, too! Are you a fan of Mondriaan, a Dutch painter famous for his Broadway Boogie Woogie? You can visit his house here, which is now a museum. Hoorn is a quiet city that is not popular with tourists and definitely a hidden gem. The small streets and alleyways add to its charm and the marvelous architecture will certainly catch your eye. The Westfries Museum offers a VR experience that will take you back into what the city looked like a hundred years ago.

As you can see, the country is more than its canals, museums, and Catholic churches. Dig deeper and you will discover marvelous sites to see and hidden gems in the Netherlands. Holland has a lot to offer, and it’s ripe for exploration. Dive into its rich culture and you will be amazed at some of the wonders of the world that you can only find here.

By: Ask The Dutch Guy/ moyermemoirs.com

How To Explore Amsterdam With Kids

1 thought on “18 Gorgeous Hidden Gems In The Netherlands”