When most people who are planning on or contemplating a trip to the Netherlands think about Amsterdam, aka “The Dam,” two things inevitably come to mind before anything else: the city’s infamous Red Light District and legal greens, unless clogs and windmills are more your speed. Conversely, Amsterdam souvenirs might never come to mind, at least not the kind you can take home. However, Amsterdam is a treasure trove of souvenirs, the kind you can take on the plane or ship home. Amsterdam souvenirs range from the historic and artistic to the edible and potable, and everything in between.

Once you get past, or bypass altogether, the Red Light District and “green” cafes and start searching for souvenirs from Amsterdam, your thoughts will surely drift to the city’s intricate network of canals, and rest assured there are rivers of canal-themed souvenirs to fish out of Amsterdam’s numerous souvenir shops. Is chocolate your drug of choice? Maybe it’s cheese? If so, Amsterdam’s got the goods. Amsterdam has a long history as a centre for cheese that dates back centuries, and as for chocolate, Amsterdam serves up some of the finest in the country that is uniquely Dutch.

Depending on your tastes and lifestyle, the Netherlands’ most famous and infamous city can seem like the netherworld. If you do choose to partake in Amsterdam’s more mind-bending activities that can leave you wondering where you are, a uniquely Amsterdam souvenir can still make your trip memorable. Keep in mind that Amsterdam is renowned for antiques, old prints and books and maps, which can particularly be found in the Prinsengracht, Lijnbaansgracht and Hazenstraat areas. Souvenirs from Amsterdam can include those for more mature audiences, but also those that are more wholesome and even sacred, which make perfect gifts for family and friends or keepsakes for the visitor to always remind you of this venerated, historic, culturally rich city — one of the most beautiful in all of Europe.

Visitors and locals alike dream of one day owning one of the numerous canal houses of Amsterdam, the “Venice of the North,” that line the city’s waterways. If you can’t afford one of these dream homes yet, you can still take one home with you in the form of a miniature canal house that will fit on the mantle of your current home. Miniature canal houses re-create Amsterdam’s most beautiful and iconic canal homes. Canal-themed souvenirs also include refrigerator magnets, postcards, puzzles, posters, T-shirts, coasters, mugs and more featuring pictures of the canals and historic canal houses

Amsterdam is famous for many things, and gouda cheese is one of its greatest claims to fame. Cheese shops in Amsterdam are as ubiquitous as marijuana cafes, so the cheese-loving tourist will be in heaven, especially if you have the munchies. Perhaps the most beloved gouda is made by Old Amsterdam, renowned for its matured, full-bodied gouda, one of the most famous cheeses in the world. Amsterdam is also home to exceptional edams and farmhouse cheese.

There are cheese shops in almost every neighbourhood in Amsterdam but some of the best include the Old Amsterdam Cheese Store, Amsterdam Cheese Company, Kaashuis Tromp and the Amsterdam Cheese Museum, which mostly sells cheese but has a small museum where you can learn about the history of cheese making and see the most expensive cheese slicer in the world. It is also a great place to buy cheese-related souvenirs. 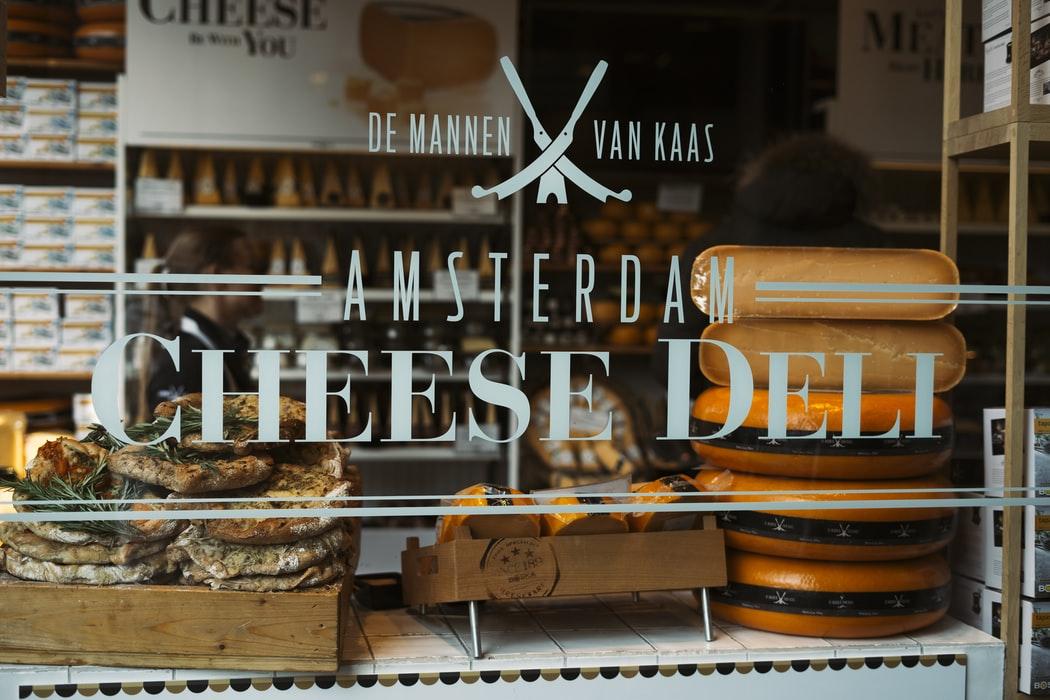 You’ll need a cheese slicer to go with all that gouda and other Dutch cheeses you take home. One particular slicer is the ideal Amsterdam souvenir for the cheese connoisseur — a guillotine cheese slicer, which, as you can surmise, looks like a guillotine, but is used for chopping cheese and not heads. The sharpest is the Guillotine of Reypenaer, which is specifically designed to cut thin slices of cheese. Other cheese-related souvenirs you can find in Amsterdam include Delft Blue Windmill knife sets cheese graters.

Another world-class Amsterdam edible is Puccini Chocolate Bonbons, from Puccini Bomboni, of which there are numerous varieties, and all hand-made. Chocoholics will be glad to know that Puccini Bomboni, the city’s most celebrated chocolaterie, has three different central Amsterdam locations. The calorie-conscious chocoholic might prefer ArtiChoc, which avoids using sugar as much as possible and specializes in fine chocolates made in-house with local fruits, nuts and cream. Amsterdam also boasts a host of other artisanal chocolatiers, has an annual chocolate festival and even a chocolate museum, Cacaomuseum, where you can find delectable Amsterdam souvenirs. 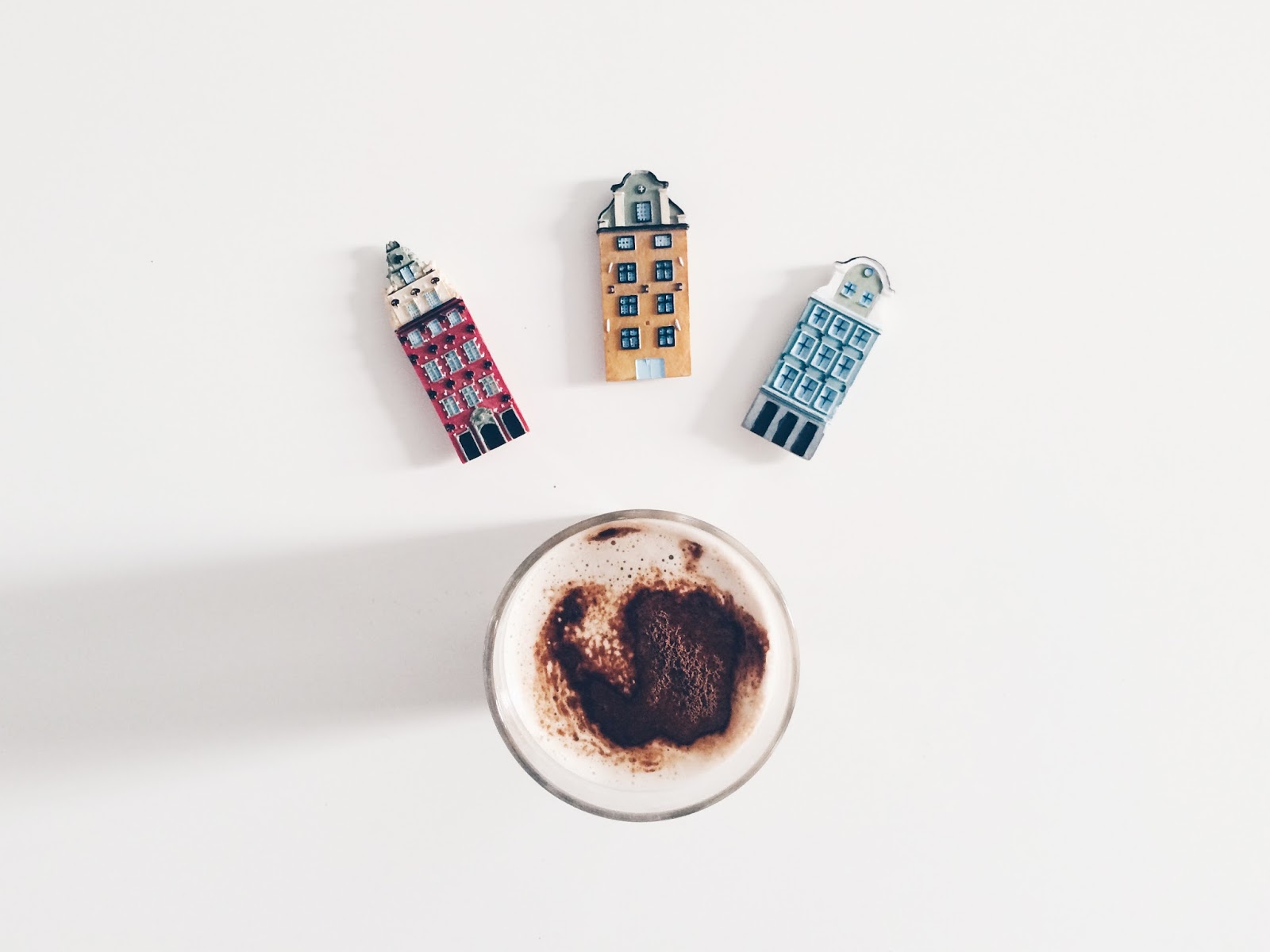 Clogs are as Dutch as tulips. Although you probably won’t see people in Amsterdam wearing them, as it is a more rural tradition, you can still find them in the city, and get them custom made or ready to wear. Clogs (klompen) are made from various types of wood and are sometimes painted, so you can either wear them or keep them as decorations. Either way, you will have no problem finding them. In fact, according to iamsterdam.com, approximately six million souvenir clogs are made in Holland every year. You can also find miniature clogs and clog fridge magnets.

The amount of beer brewed in Amsterdam is staggering, the most famous of which is world-renowned Heineken. However, if you are looking for the best, some of the most respected and coiffable beer, according to Amsterdam Breweries, includes Allmouth, imperial smoked porter; Offline, white ale; N.E.I.P.A., New England IPA; Big Fat Double 5, IPA; and Gajes, tripel. If you love variety, buy an Amsterdam beer pack to take or ship home. And don’t forget to take a tour of the world-famous Heineken brewery, where you can purchase all manner of Heineken souvenirs as well as the beer. This beer giant has been making its celebrated brew in Amsterdam since 1864. 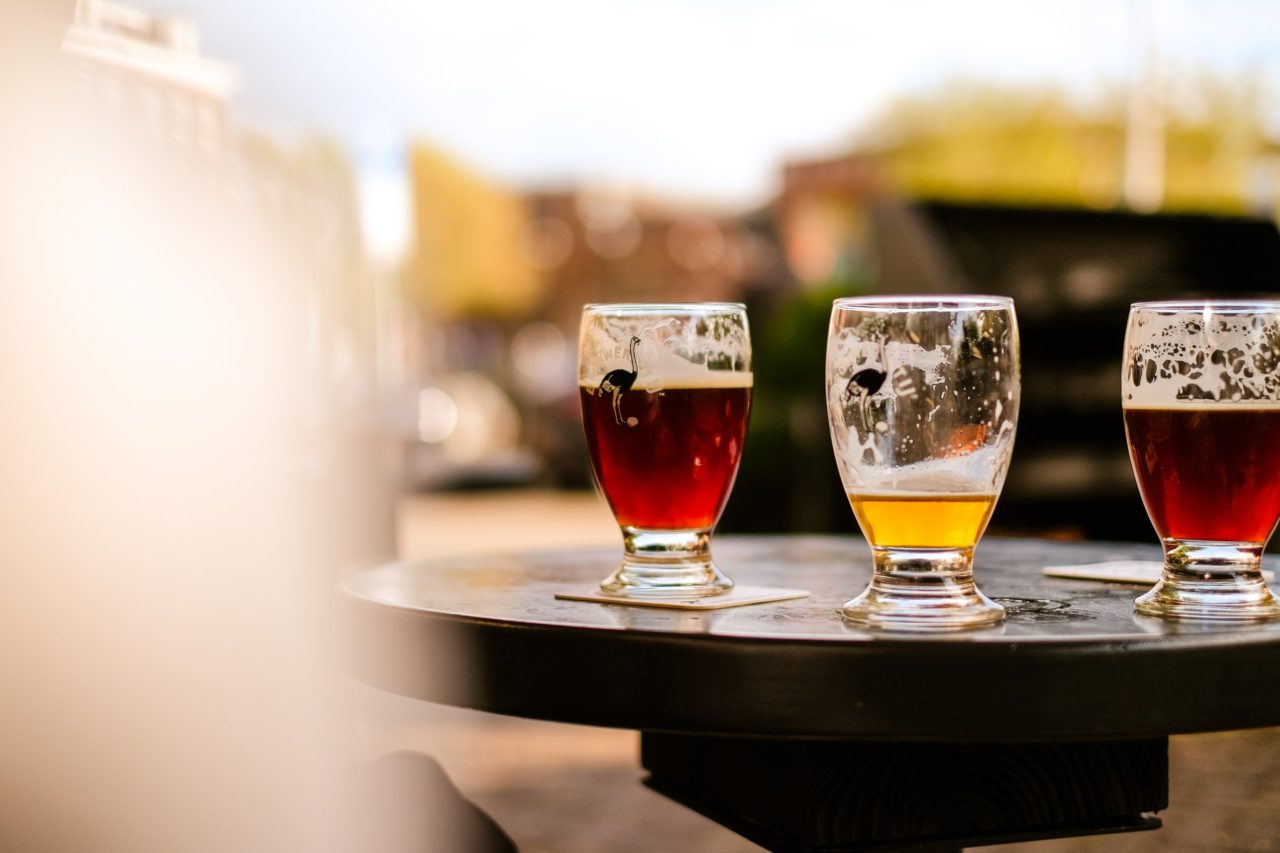 Anne Frank is Amsterdam’s most beloved and historic figure. Anne’s diary, “The Diary of a Young Girl,” which chronicles her life from 1942-1944 hiding from the Nazis in an Amsterdam building, has sold more than 30 million copies and been translated into more than 70 languages. Today, 75 years after her death in a concentration camp, over 1 million people visit the Anne Frank House in Amsterdam, located at Westermarkt 20, 1016 GV, every year. The historic house/museum sells copies of Anne’s diary, a perfect and sacred Amsterdam souvenir. More Anne Frank souvenirs you can buy at the house/museum include postcards, DVDs and other books.

Similar to clogs, windmills are also synonymous with the Netherlands. Unlike clogs, however, you can’t take them home with you, unless it is in miniature souvenir form. Windmill souvenirs range from the basic unadorned wood to those with working electrical lights and rotating wings, which are ornately carved and painted. You can also find musical windmills, fridge magnet windmills, windmill keychains, windmill puzzles, necklaces, Christmas ornaments and even windmill earrings.

The Netherlands has the highest per capita consumption of liquorice in the world, so finding that tasty treat in Amsterdam will not pose a problem, as more than 20% of all candy sold in the country is liquorice. Be aware that some Dutch liquorice is both sweet and salty, but is also available in a plethora of tastes, as well as shapes and sizes, hard and soft. One of the best places to find this edible Amsterdam souvenir is Het Oud-Hollandsch Snoepwinketje, whose glass jars overflow with a cornucopia of liquorice to suit any taste.

Amsterdam is the proud home of many museums, and the Van Gogh Museum is one of its most popular. Here you will not only find the largest collection of works by Vincent van Gogh in the world but artistic Amsterdam souvenirs relating to the master, such as “Masterpieces,” a book containing high-quality images of over 100 masterpieces from the museum’s collection, Vincent van Gogh figurines, jewellery, posters and more.

Despite Amsterdam being well-known the world over for its more adult activities, it is also a great place for kids, and Amsterdam souvenirs for children abound. One of the most sought after is Nijntje Knuffel, a popular bunny stuffed animal, which is based on the famous Dutch cartoon rabbit. The best place in Amsterdam to find them and other bunny-themed items is De Winkel van Nijntje, which only sells Nijntje products. Other souvenirs from Amsterdam for kids include T-shirts, puzzles, toys and, of course, chocolate.

Amsterdam is an open-air museum of bicycles, from the antique to the modern. In fact, Amsterdam has more bikes than people, and bicycles clog its canal-lined streets every day. On the plus side, due to the city’s obsession with bikes, the visiting cycling enthusiast can find a plethora of Amsterdam-themed bike souvenirs. These include miniature bicycles, bicycle seat covers, keychains, T-shirts and other apparel and much more. If you want the ultimate Amsterdam souvenir why not buy a full-size bicycle? You’ll have no problem finding the right one at one of the city’s numerous bike shops, whether it be old school or brand new and top of the line.

Even if your trip to the Netherlands doesn’t include a visit to Delft, you can still find world-famous Delftware in Amsterdam. Delftware, that iconic blue and white earthenware, is available all over Amsterdam. Delftware items range from lamps, plates, cups and jars to bracelets, necklaces, windmills and even clogs. If you’re searching for more antique lamps, tableware and more then check out Kramer Kunst & Antiek. This quaint Prinsengracht antique shop specializes in Dutch tiles, earthenware, glass, jewellery, old blue Delftware, lighting, artefacts and much more.

People the world over love jeans, and there are seemingly endless brands to choose from. But if you’re visiting The Dam, you have to purchase a pair of G-Star Jeans. This cutting-edge Dutch designer denim is de rigueur streetwear for the trendy and hip of Amsterdam, are made for men, women and children, are popular throughout Europe and can be found at almost any Amsterdam clothing boutique.

In addition to world-class iconic beer, Amsterdam is renowned for its liquor, particularly genever, the traditional liquor of Holland. Genever, aka “Dutch gin,” is juniper-flavoured. Amsterdam is home to numerous genever distilleries, with Bols, the planet’s oldest distilled liquor brand that was founded in Amsterdam in 1585, being the favourite. Pick up a bottle just about anywhere in town for a great Amsterdam souvenir.

The motto of Amsterdam’s adored Pip Studio is “Happy products for happy people,” and their colourful and cosy bathrobes will make you ecstatic. In addition to bathrobes, which are 100% cotton velour and come in all sizes, Pip Studio, quickly becoming a household name around the globe, offers bath towels, bedding, bags, tableware and stationery, all of which make for great Amsterdam souvenirs.

Last but not least, you can’t leave Amsterdam without tulip bulbs, whether real or wooden. The best place in the city to pick up a bag of tulip bulbs is the floating flower market. However, keep the season in mind, and remember that midsummer, August to September, and not spring, is the best time to buy them. If you do find yourself in Amsterdam in spring and must have tulip bulbs, you can order some from Keukenhof and they will ship them to you when the bulbs are ready in the fall.

The Mysterious Dutch City With 224 Names