Hawaii’s tropical climate and laid-back Pacific Island atmosphere are just part of what makes the state so special. Occupying the tops of massive volcanic mountaintops jutting from the sea, these islands have a diverse and beautiful landscape that varies from the stark lunar surface of the Kilauea volcano to lush green forests filled with exotic flowers. Waterfalls stream down the mountainsides like tears on the dramatic Na Pali coast, while ancient rivers have carved deep into the rock of Kauai to create the Waimea Canyon. The Big Island is home to an active volcano, and Oahu is home to Pearl Harbor and its rich history. Surrounding them all, the mighty Pacific is home to a plethora of ocean life, providing endless opportunities to snorkel, scuba dive, surf, or simply go for a swim after sunbathing. Perhaps the most special part of the islands, however, are its people, whose welcoming attitude makes you truly feel like you are in paradise. 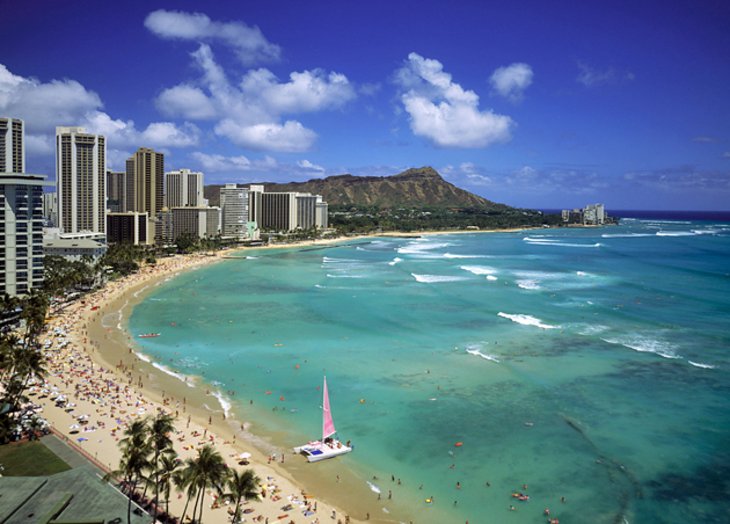 Waikiki, with its beautiful stretch of oceanfront beach, is Hawaii’s biggest tourist attraction. A suburb of Honolulu, Waikiki is popular for its big resorts, dining, entertainment, and shopping. The Waikiki Historic Trail includes historic markers made of surfboards, inspired by Waikiki’s own Duke Kahanamoku, an Olympic gold medalist swimmer, and avid surfer. The boardwalk, known as the Waikiki Beach Walk, is lined with cafes and entertainment venues, while Kuhio and Kalakaua Avenues are where the bulk of the area’s restaurants and boutiques can be found. Diamond Head State Monument sits at the end of the crescent-shaped beach, creating a distinctive profile on the coastline. It was once an important vantage point for the island’s coastal defense, and a steep hike to the top brings you to the old bunkers and artillery control station and rewards your efforts with panoramic views. 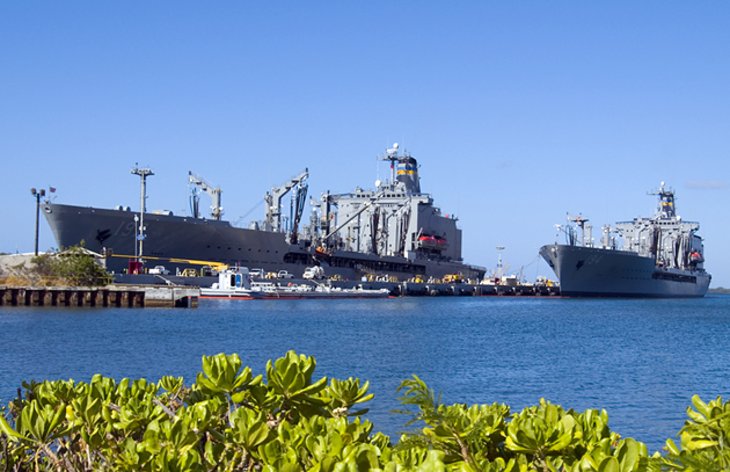 Pearl Harbor is a National Historic Landmark and active military base that earned its place in history for the 1941 attack, which killed 1,177 servicemen on the USS Arizona. The site is now home to several attractions that are part of the World War II Valor in the Pacific Monument, including the USS Arizona Memorial, which floats above the remains of the sunken ship – parts of which can be seen protruding from the water. There is no cost for a tour of the memorial, however, reservations are recommended due to its popularity. The Pearl Harbor Visitor Center has free admission and is the meeting place for tours, including transportation to the Pacific Aviation Museum on Ford Island, where visitors can see WWII aircraft and artifacts, as well as experience, landing an airplane on an aircraft carrier in a flight simulator. Other attractions include the USS Oklahoma, USS Utah, and the Battleship USS Missouri whose deck can be toured by visitors. 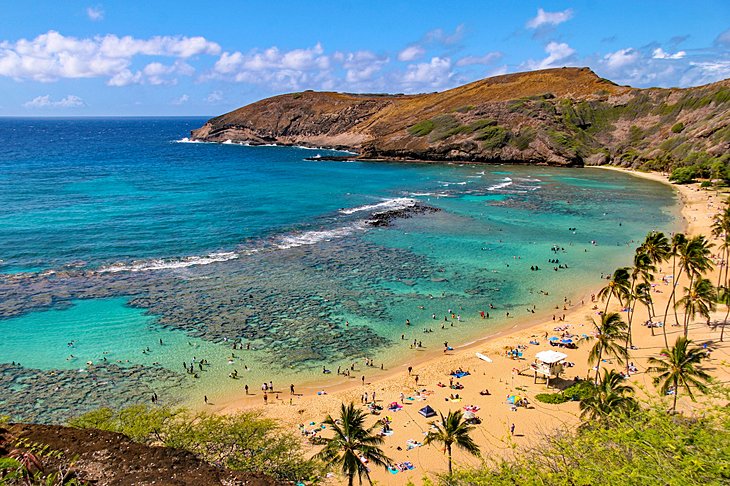 Formed within the crater of a volcano on the island of Oahu, Hanauma Bay is a unique protected bay, which has been popular with snorkelers for a long time. After overuse caused pollution and damage to the delicate reef ecosystem, restoration efforts have restored the bay to its original splendor, and it is again open to visitors. The Hanauma Bay Education Center is a great place to learn about the bay, and there are several snorkeling rental shops that offer lessons so that visitors can see the breathtaking reef system and its inhabitants up-close. 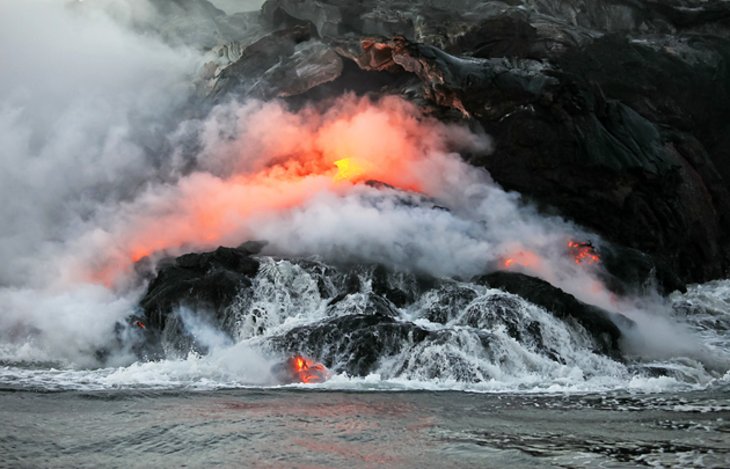 The park’s centerpiece, Kilauea, has been active as recently as 2018, and visitors should be aware that portions of the park are closed during periods of seismic activity that might pose a threat.

Located on the Big Island of Hawaii, Volcanoes National Park offers a unique, close-up look at an active volcano system where lava seeps from fissures in the earth. The surrounding landscape is shaped by cooled lava rock, both old and new, which has flowed over roads in a display of its unstoppable force. During the area’s most active periods, tourists have the chance of experiencing the thrill of feeling seismic activity, hearing the boom of gas emissions, or even seeing a pillar of ash escaping into the air. The park has many things to do and see, including the Thurston Lava Tube, the Jagger Museum, Devastation Trail, and the steaming Halema’uma’u crater. Address: 1 Crater Rim Drive, Hawaii National Park, Hawaii 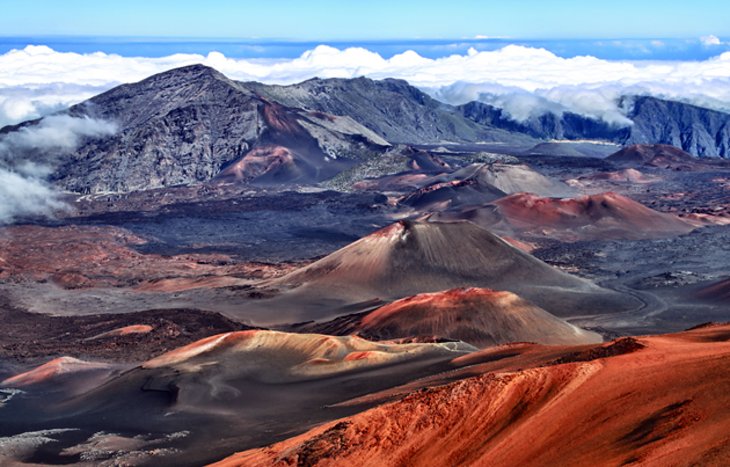 Located on Maui, Haleakala National park offers access to the inactive Haleakala Volcano, which stands at over 10,000 feet. Views from the summit stretch across the entire island and are particularly beautiful at sunrise. The dormant crater is exposed, showing a lunar-like landscape, while other areas of the park are covered in subtropical rain forests, which are home to endangered species. Visitors can explore the many hiking trails freely or sign up for guided ranger-led tours, and the more adventurous can spend the night in the park, surrounded by one of Hawaii’s most impressive landscapes. 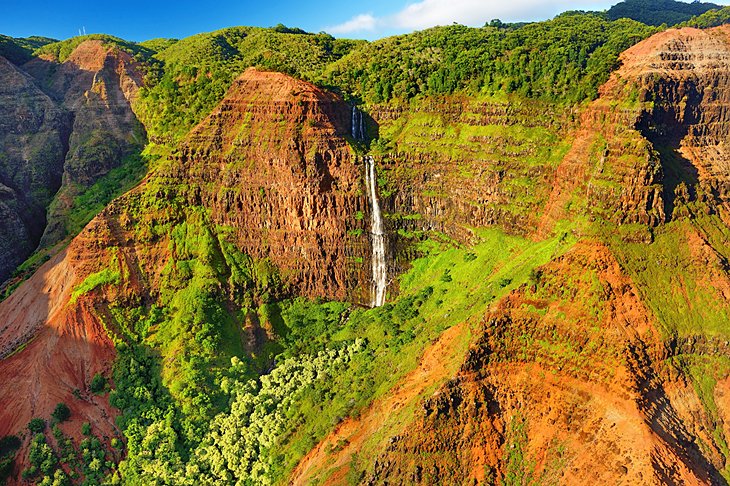 Waimea Canyon, located on the west side of the island of Kauai, is often referred to as the “Grand Canyon of the Pacific.” The canyon stretches over ten miles long, reaches depths of 3,600 feet, and is a mile wide at some points. This dramatic spectacle can be viewed best from the two main lookouts, Puu ka Pele and Puu Hina Hina. The canyon’s landscape features rock strata in varying colors and several stunning waterfalls. Guided tours along the many challenging hiking trails and rafting tours that explore the river below are available, and there are additional trails for all skill levels at the nearby Kokee State Park. 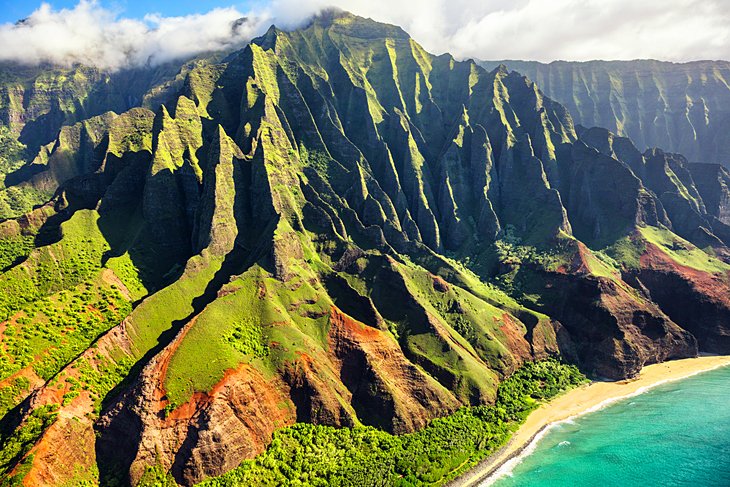 The Na Pali Coast State Wilderness Park on the island of Kauai contains some of the world’s most dramatic landscapes. These were made famous in the film Jurassic Park, which shows a dramatic coastline with cliffs that seem to ripple and the “Wall of Tears” on Mount Waialeale, named for the way in which hundreds of waterfalls weep from the slopes of the mountain. Some of the best ways to take in the scene are to approach by water or to take a helicopter tour to view the simply breathtaking sight from above. Expert hikers can try the Kalalau Trail, an eleven-mile trek, which traverses five valleys and takes a full day each way. 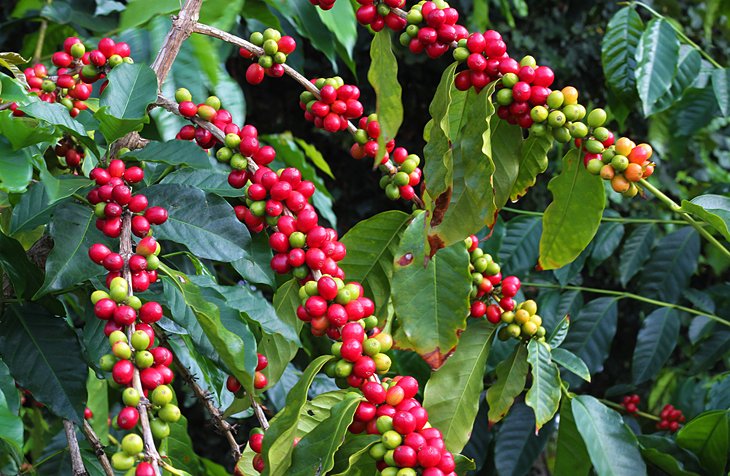 The Kona Coffee Living History Farm is the only living history farm in the nation that is dedicated to the history and traditions of coffee farming. Costumed interpreters can be found throughout the grounds, going about daily tasks, from food preparation to farming chores, always happy to answer questions. Visitors are also free to explore the plantation, which still produces coffee, where you might even spot a Kona Nightingale. Visitors can also find tours of modern Kona coffee producers, including plantation tours at Hula Daddy and roasting facility tours at Mountain Thunder Plantation. 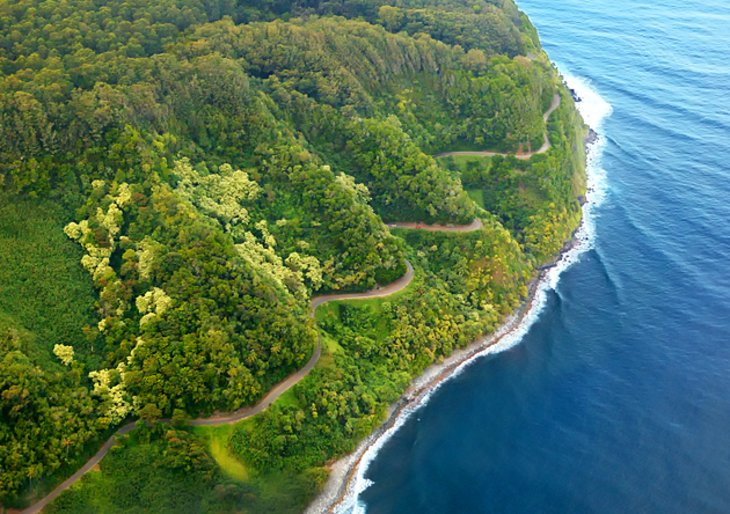 The dramatic Hana Road, officially named Hana Highway, is a scenic 52-mile stretch of highway on the island of Maui that winds from Pāʻia through lush forests and along the coast to the remote town of Hana. This trip is worthwhile both for the sightseeing along the stunning drive, the things to do along the way, and the visit to the town itself. Attractions along the route include numerous hiking trails, waterfalls, scenic overlooks, and beaches. Hana’s location, relatively cut off from the rest of the island, has allowed it to maintain more of a traditional Hawaiian culture than other towns. 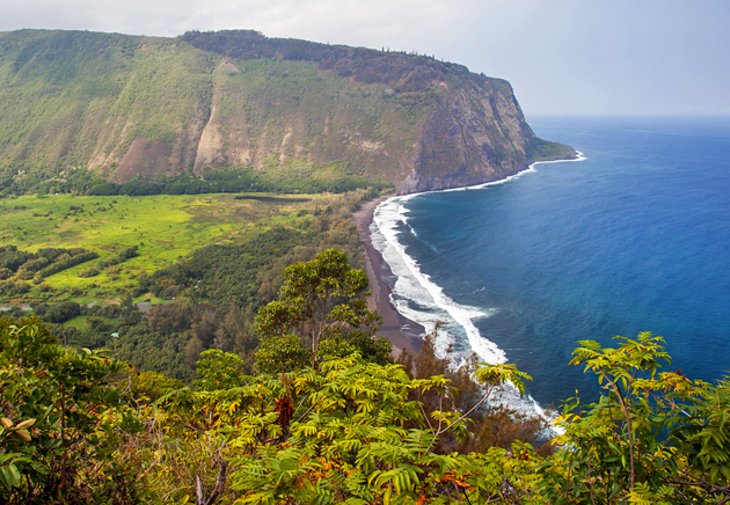 One of the most scenic spots on the Big Island of Hawaii is the lookout over Waipio Valley. Surrounded by lush cliff walls, the fertile valley opens out to the ocean, where the black-sand beach is met with white waves and blue water. Hiking in Waipio Valley is considered some of the best in the state, and many of the trails are suitable for beginners. For an extra special experience, local guides provide horseback riding tours of the valley, allowing you to enjoy the sights from a different perspective. 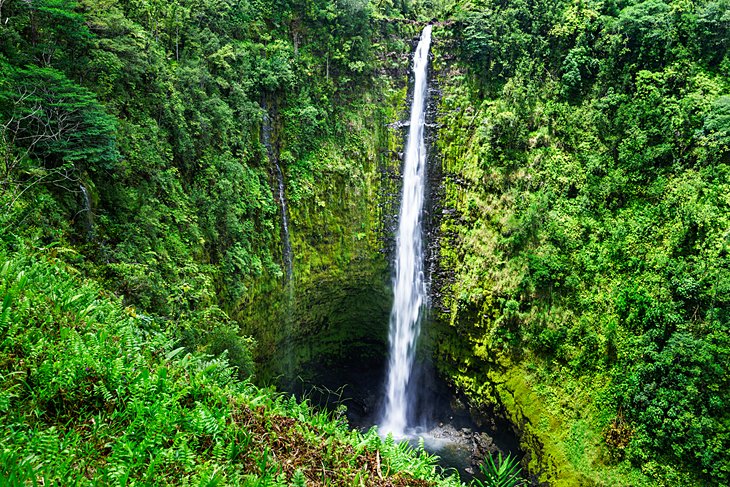 This scenic drive along the Hamakua Coast stretches from Hilo to the Waipio Valley Lookout on the Big Island of Hawaii. In addition to spectacular views of the coast and the region’s lush landscape, several top Big Island attractions reside along the way, making this an ideal sightseeing excursion. From Hilo, tourists take the Onomea Scenic Drive past Onomea Bay and the renowned Hawaii Tropical Garden, which houses more than 2,000 species of tropical plants. As the route heads north, it continues past the 442-foot Akaka Falls and its sibling Kahuna Falls, and then the World Botanical Gardens, where you can view a triple waterfall named Umauma Falls, as well as Mauna Kea. Other attractions along the way include a Pacific lookout at Laupahoehoe Point, hiking at the Kalopa State Recreation Area, and the quaint town of Honokaa. The drive ends at the legendary Waipio Valley Lookout, once home to King Kamehameha. 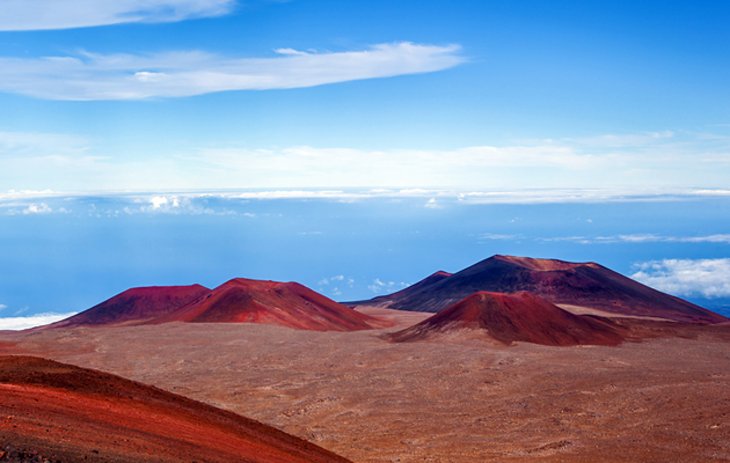 The highest mountain in Hawaii, Mauna Kea, on the Big Island of Hawaii, is a world away from the tropical paradise below. The summit, which can only be reached in a 4WD vehicle, is often very cold, with snow in the winter months. The Mauna Kea Observatory is an active research facility, which welcomes tourists during daylight hours. Only expert hikers should attempt a climb to the summit on the six-mile trail, which rises to an altitude of 13,800 feet from the Visitor Information Station. Evening stargazing programs, held at the visitor center, which sits at around 9,200 feet, are popular with tourists and locals alike. 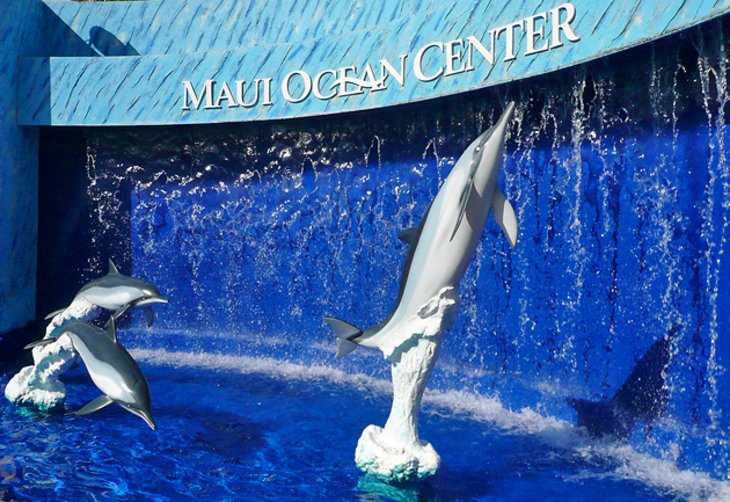 The Maui Ocean Center allows visitors a chance to see close up what lies beneath the ocean’s surface and learn about the unique marine life and ecosystems that surround Hawaii. The aquarium’s centerpiece is the massive Living Reef, which is home to more than 40 Pacific coral species and thousands of fish. The 750,000-gallon Open Ocean exhibit gives visitors the chance to walk through an underwater tunnel, surrounded by ocean life including sharks, stingrays, and other marine animals. The center’s Turtle Lagoon is another popular spot, and behind-the-scenes turtle feeding encounters can be booked. 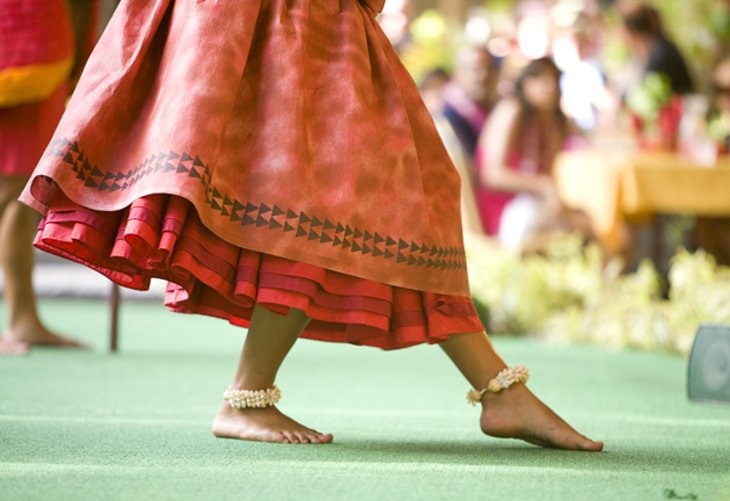 Located on Oahu, less than an hour’s drive from Honolulu is the Polynesian Cultural Center. Through music, dance, craft demonstrations, and games, the center portray the culture and daily life of the Polynesian islanders in Hawaii, Tahiti, the Marquesas Islands, Tonga, Samoa, and Fiji, as well as that of the Maoris in New Zealand. The center is divided into sections representing each of these locations. Many of the performers come from the islands that they represent, providing a high degree of authenticity. Visitors can tour the facility during the day or see a show in the evening. 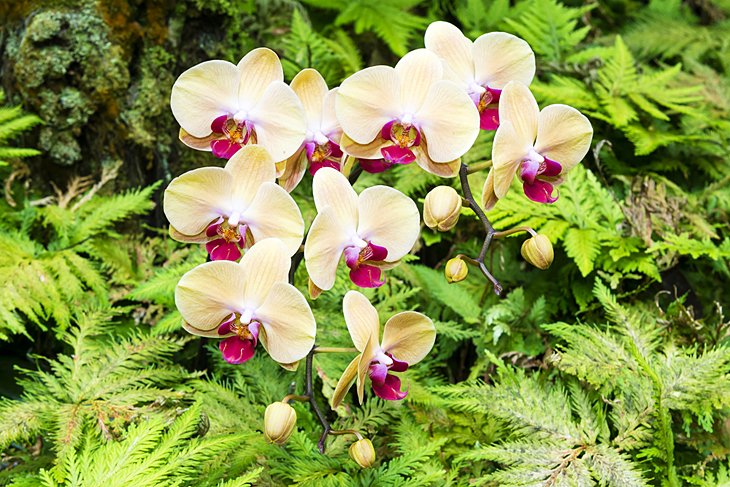 The Princeville Botanical Gardens is a family-operated facility, which grows a wide variety of exotic flowers, medicinal plants, and food-bearing plants. Visitors are able to enjoy the gardens via guided tours and learn about the plants, their uses, and other interesting facts while seeing cacao trees, stunning flora, and working beehives. The tour also includes the opportunity to taste both raw and processed cacao (in the form of gourmet chocolate), as well as honey made from the nectar of the tropical flowers.

By: Lana Law and Lura Seavey

The 7 Best Burgers In Hawaii