The aqua blue alpine lakes are the visiting card of Bavaria. The richest federal land of Germany has over 300 lakes from small mountain reservoirs to the real “Bavarian Sea”. Many of the most beautiful lakes in Bavaria originated during the ice age. Fortunately, since then it has become much warmer, and today you can enjoy beach recreation, windsurfing, scuba diving or sailing, without leaving the Bavarian region.

“Bavaria is the first step of paradise,” says Prime Minister Horst Seehofer. Anyone who has ever been to Bavaria is unlikely to argue with him. The Bavarian nature can boast fresh air of Allgäu, untouched forests of Franconia, and endless valleys of Upper Bavaria. But above all, Bavaria is the land of lakes, including mountainous ones.

When sitting on the lakeshore in the Bavarian countryside, you can see not only the top of the Zugspitze, the highest mountain in Germany but also smaller mountains — Karwendel and Benediktenwand. Wondering what lakes to visit in Bavaria? Look no further! 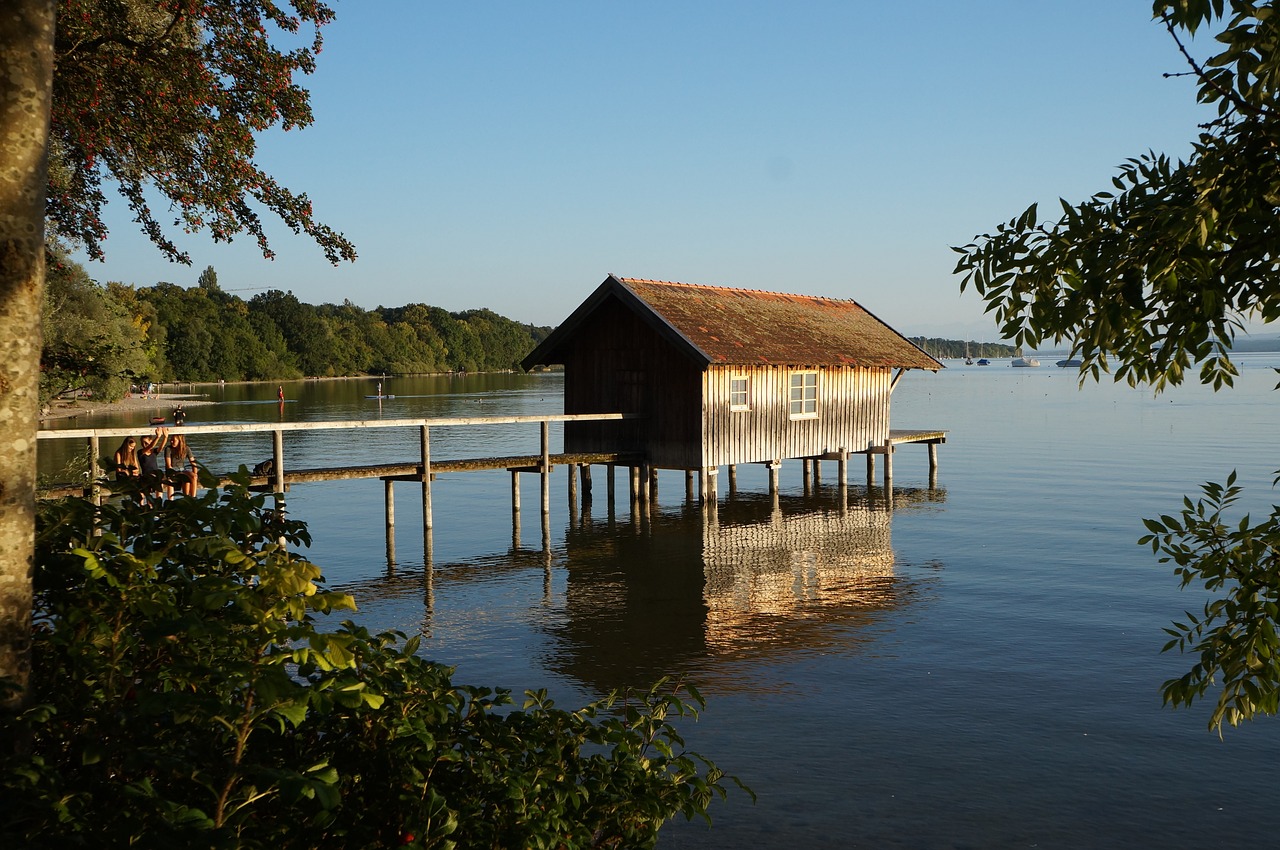 The most popular lake to visit is Ammersee – this is the third-largest among lakes in Bavaria, as well as one of the warmest and cleanest. Moreover, it is only half an hour’s drive from Munich, Bavaria. Like other lakes in the Alpine foothills, the Ammersee appeared as a result of glacier melting about 14 thousand years ago. Forested moraines all along the coast are reminding us of that process.

Today Ammersee lakes is a Bavarian Mecca of sailing and windsurfing thanks to a large area of almost 50 square kilometers. Those who don’t care about water sports will find other activities to their liking: there are plenty of hiking trails in the surroundings of the lake, Andechs Abbey of the XV century being among local sights.

This area is also perfect if you want to go camping in Munich area. 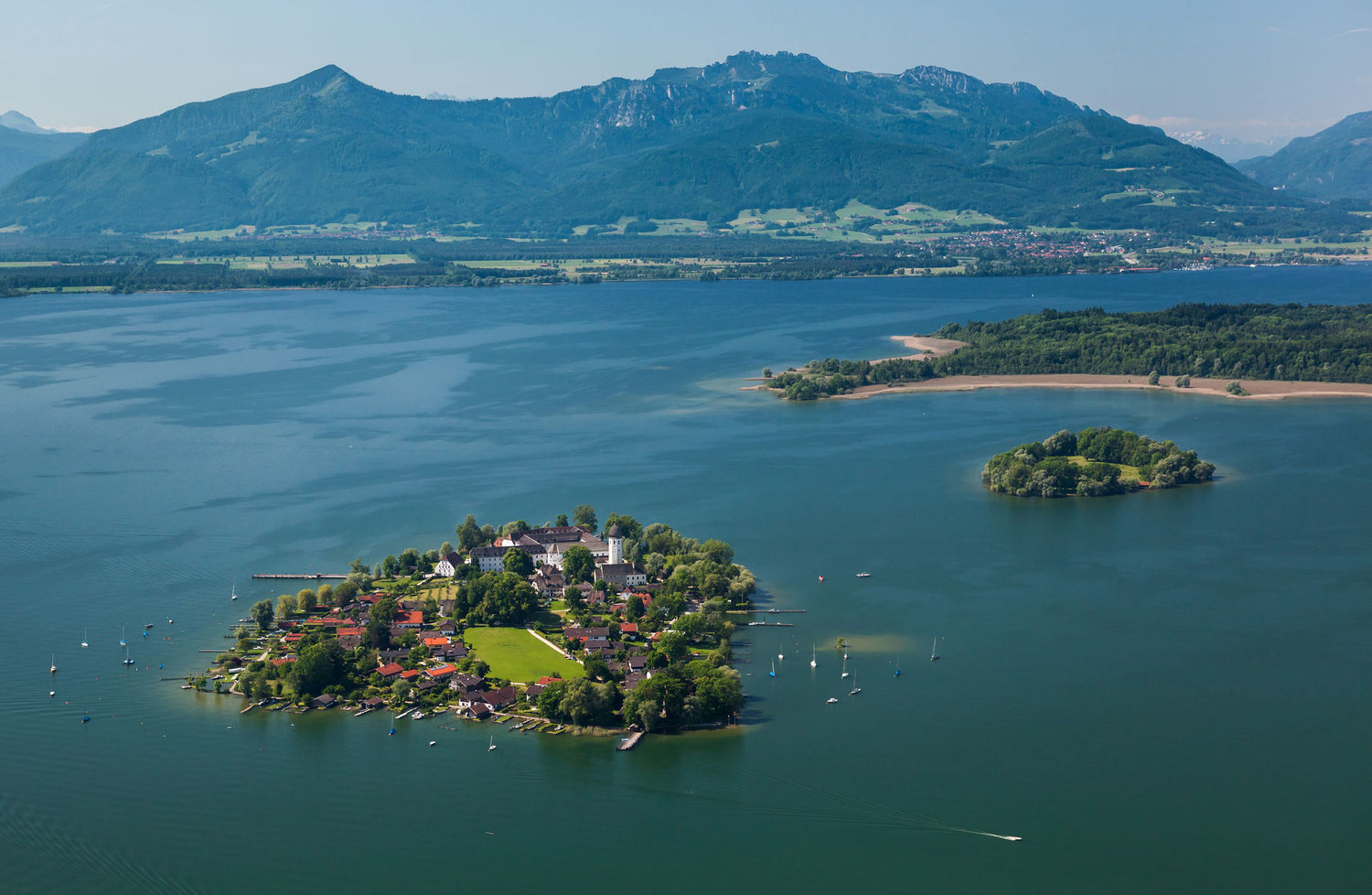 “Bavarian Sea” is Chiemsee lake, located in the Chiemgau region, between Munich and Salzburg. Its area is almost 80 square kilometers, and it is the third-largest among lakes of Germany after Lake Constance and Lake Müritz. Local nature is so picturesque that it has more than once served as a source of inspiration for German artists.

Chiemsee has two islands – the Female (Fraueninsel) and the Male (Herreninsel), where the “fairytale king” Ludwig II built himself a luxurious country residence, following the example of the French Versailles. 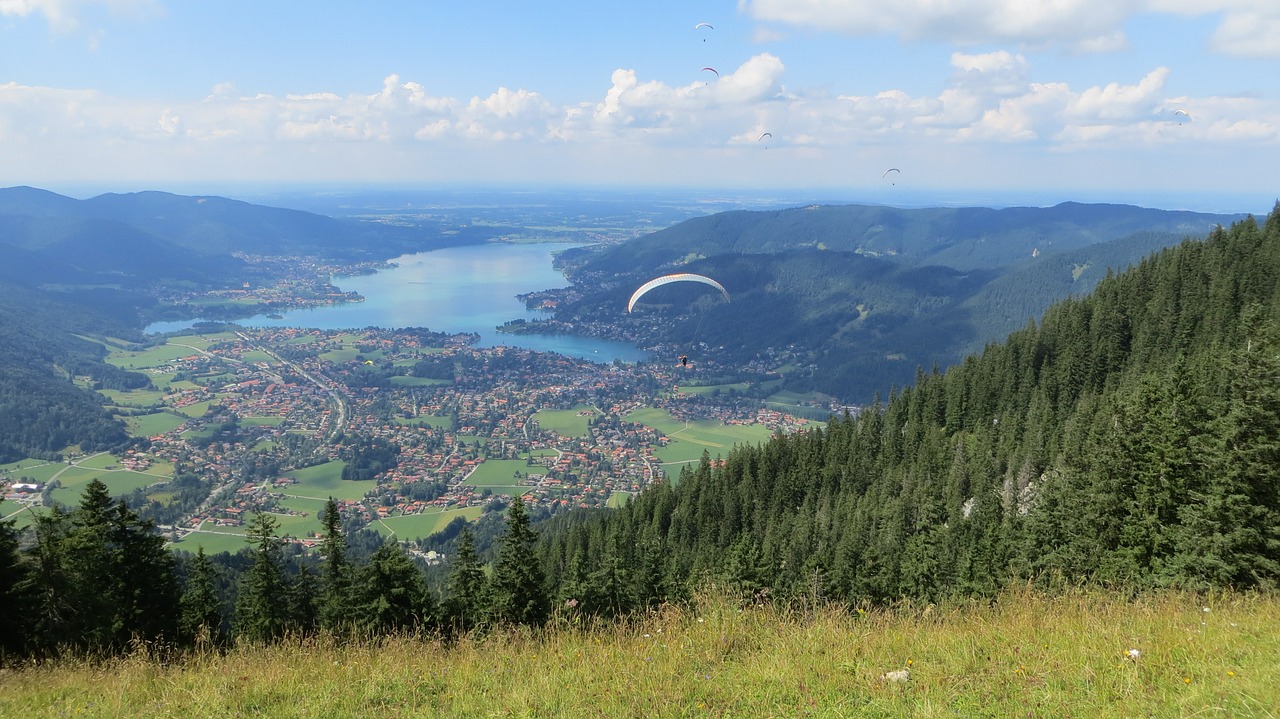 Another “gift” of the Ice Age is located in the foothills of the Bavarian Alps – the azure lake Tegernsee. The slope of the nearby mountain was chosen by paragliders, and in good weather, their bright domes adorn the sky above the azure waters of Tegernsee. Local attractions include the former Benedictine monastery and its brewery.

Throughout the years, many prominent people have lived on the bank of Tegernsee including the ex-chancellor of Germany and the father of the German “economic miracle” Ludwig Erhard, publisher Hubert Burda, and the German millionaire Gunter Sachs.

Today, owning a house near Tegernsee is perhaps the greatest luxury in Germany. Prices for ready-made villas there start from a million euros, and to build your own house you have to wait for permission for months!

This place is great for a lake holiday in Germany if you are ready to splurge! And, of course when there, you can miss all the gorgeous German food and authentic sides like Himmel un Ääd and Knödeln. 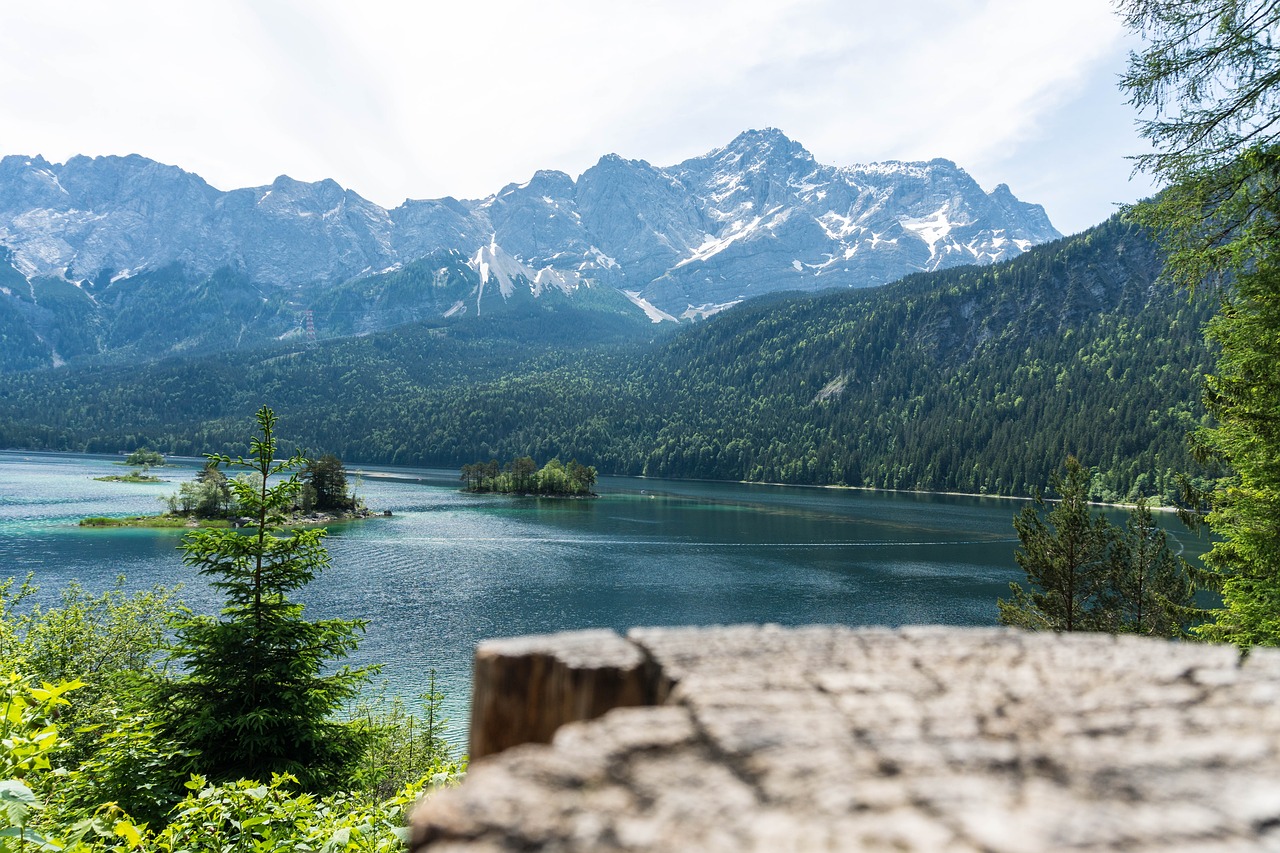 Eibsee is one of the few lakes in Bavaria that is privately owned. In 1884, it was acquired by Augustus Terne at the auction for ten thousand marks. He was so fascinated by the clear green waters of the Eibsee that he decided to turn it into a luxury resort.

Local authorities laughed at him and didn’t believe in the success of the event. Earlier, Eibsee was popular only among fanatic fishermen – it was too difficult then to reach the lake located at an altitude of almost a thousand meters. However, soon the news about the idyllic corner where the azure sky merges with the turquoise waters spread across Munich. And for more than a hundred years there has been no end of tourists. Even on the hottest day, the breeze here is pleasantly cool and Bavarian mountain lake flowers here are gorgeous.

Even the Dalai Lama left a thank-you note in the guestbook, which means the state of Zen on Eibsee is guaranteed. 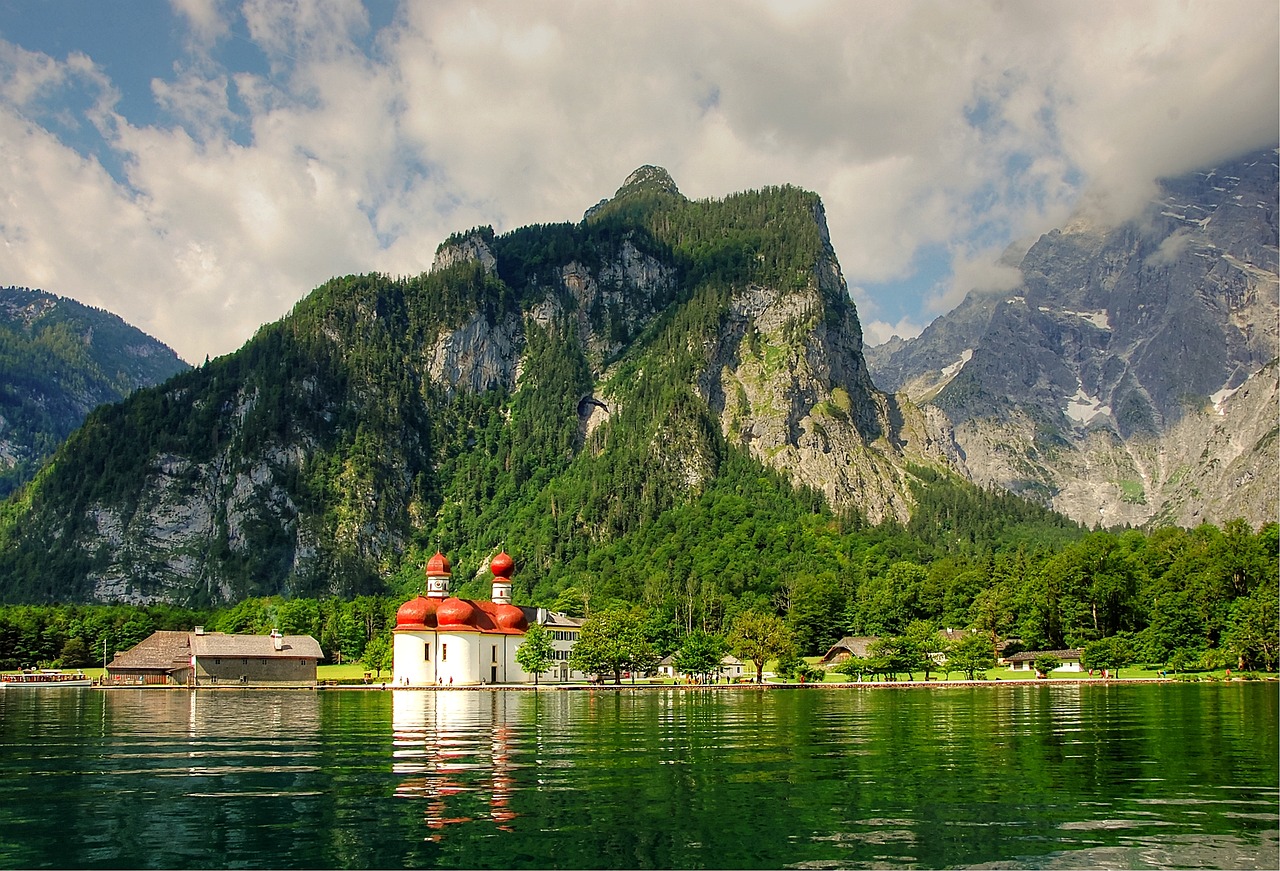 Lake Königssee (“King’s Lake”) is one of the most beautiful natural attractions in Germany. It is located in southeastern Bavaria and belongs to the Schönau am Königssee community. Most of the lake lies on the territory of the Berchtesgaden National Park. Due to the unique nature and picturesque surroundings, the lake is very popular with travelers and tourists, and is perfect for lakeside holidays in Germany!

Can you imagine trying some of the best German food in a cafe with such a gorgeous view?! This can be your next vacation!

Königssee is famous for its clear water and bears the status of the cleanest lake in Germany.

Lake Obersee is truly Germany’s wonder which is considered to be the main attraction of the Berchtesgaden National Park – one of the most beautiful national parks in Europe. The lake looks like an emerald among the Alpine rocks and forests.

Obersee is so calm that its smooth surface is a perfect mirror! This is a truly secluded area of wildlife in Bavaria, where you can find relaxation for your soul and feel the unity with mother nature. It is a joy for your eyes, with the purest mountain air for your lungs!

There are no settlements, only a small farmhouse and several cows grazing in an alpine meadow.

Gothensee can boast soft sand and beautiful panoramas of the lake. To get some aesthetic pleasure, go on a tour around the lake, and if you want to be active, then rent a women’s road bike for beginners and explore the surroundings.

There are so many wellness resorts around the lake, and they provide all kinds of programs and services for health and beauty. Bioenergy, shiatsu, thalassotherapy, classical physiotherapy, osteopathy – these are just some of the services offered.

The island of Usedom is located twenty minutes from Lake Gotensee. Usedom Island is Germany’s second-largest and sunniest island and is known as “German Switzerland” for its landscapes. The island is home to the town of Albek. 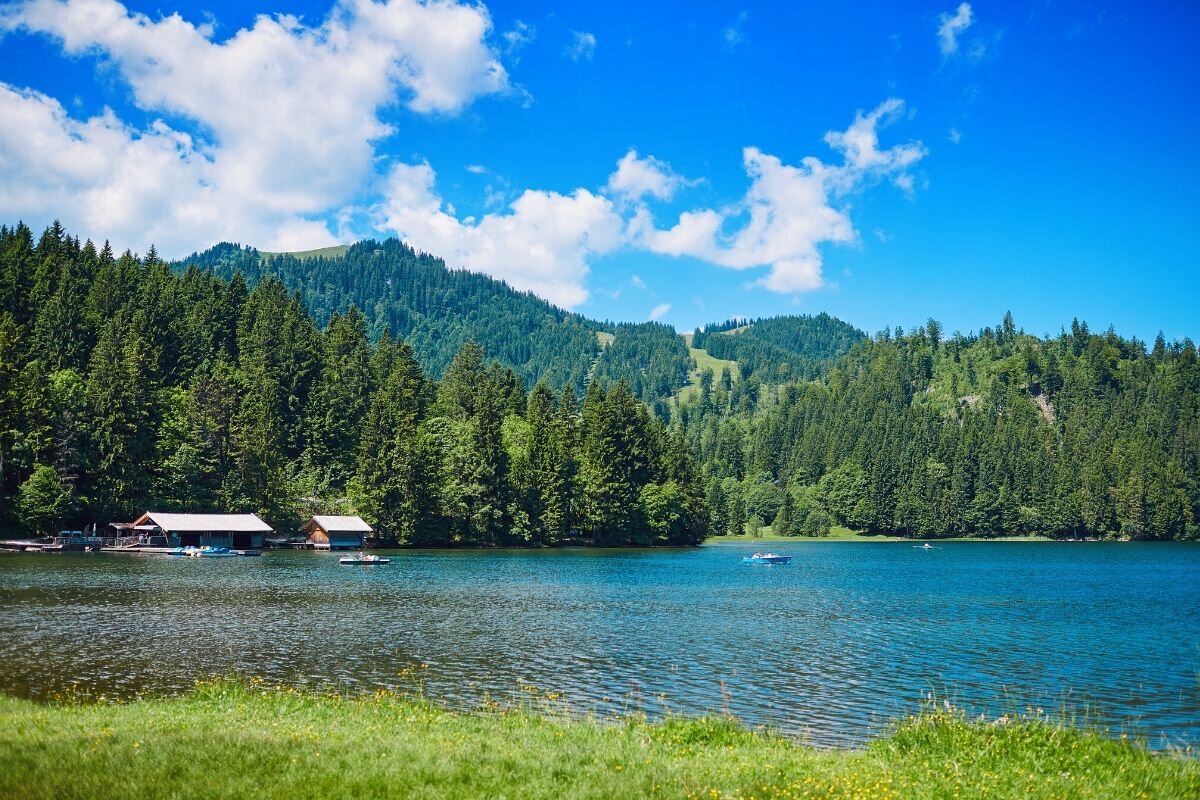 Spitzingsee is a small mountain lake located at an altitude of 1084 meters above sea level in the Bavarian Alps. The maximum depth of the lake is 16.5 meters.

The lake is part of the famous ski resort Schliersee and Spitzingsee, and therefore is a very popular holiday destination for tourists and local residents, there are also children’s camps and language schools. 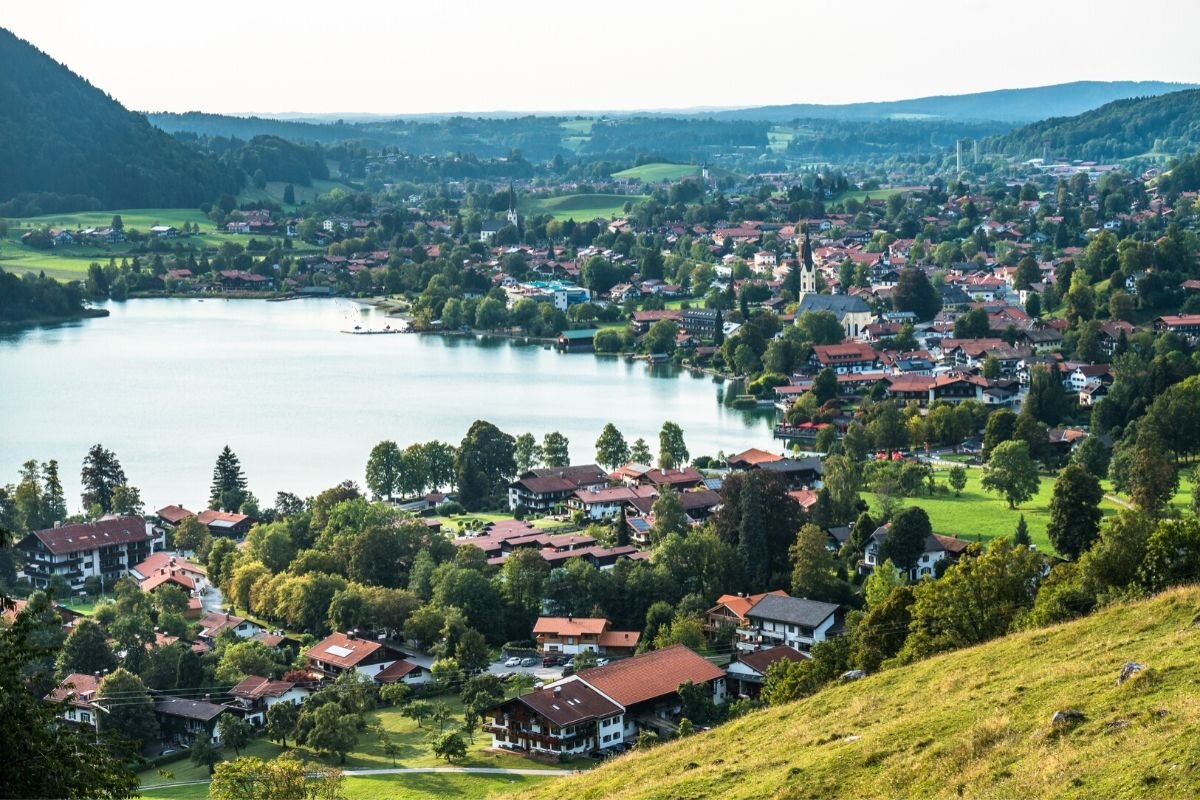 This lake will be great for you if you love eco-tourism. All walking routes are marked by signs that describe in detail the local flora and fauna. 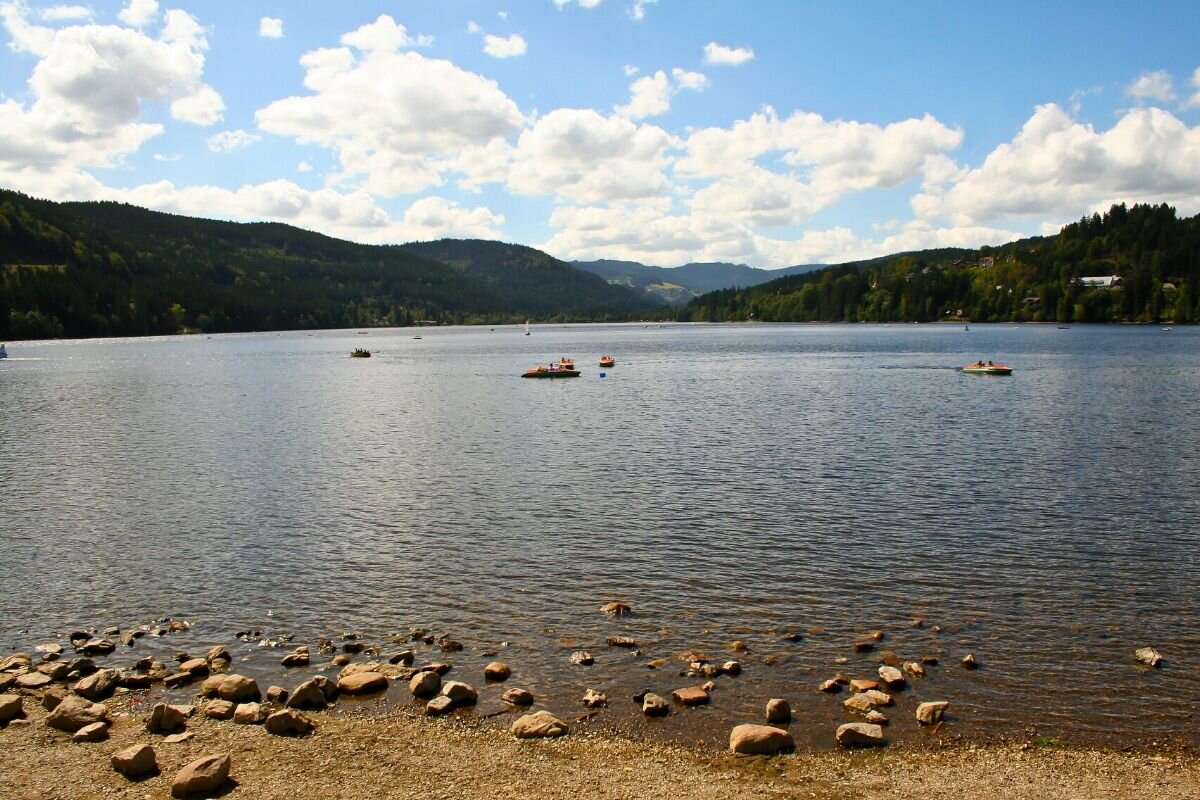 Lake Titisee is located in the Black Forest highlands, in the southeastern part of Freiburg. Thanks to the clear water and clean beaches, this place is very popular among local and visiting tourists.

The main tourist city on the lake is Titisee-Neustadt, it is also the most convenient to get here from major cities in Germany. The closest major city, located 25 km away, is Freiburg, which is why tourists often combine a visit to Freiburg with a vacation on Titisee.

Where to stay on Titisee

Titisee-Neustadt is a relatively small resort town, so it is customary to stay here not in hotels but in apartments or so-called holiday homes.

Funtensee is a small picturesque alpine lake. It is located in the Berchtesgaden National Reserve and is part of the biosphere reserve, which was included in the UNESCO World Heritage List in 1990.

The lake is surrounded by picturesque mountains, including the famous ridge Stone Sea, magnificent alpine meadows, as well as the healing salt caves.

The lowest temperature indicators in the country’s history were recorded at this lake. This is a kind of cold pole in Germany. 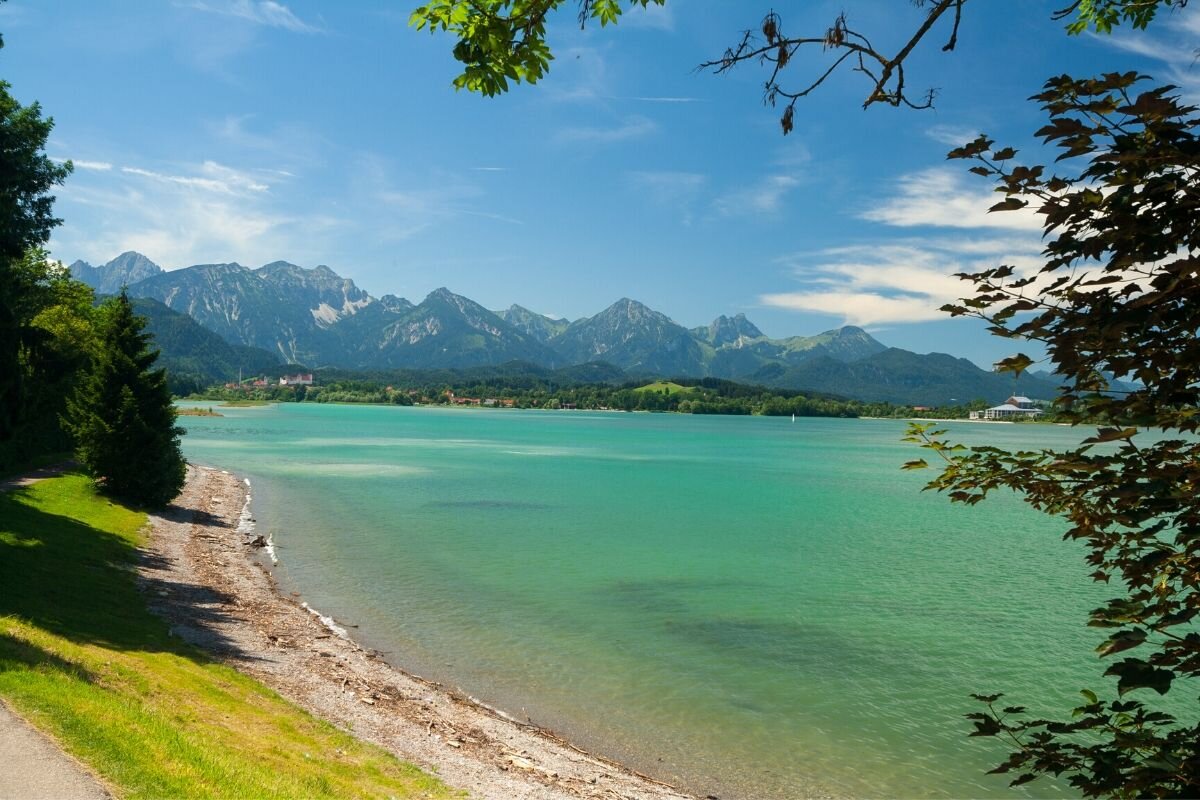 Forggensee is a mountain lake located at the foot of the Bavarian Alps. This is the fifth-largest among lakes in Bavaria, as well as one of the cleanest. Unlike most local lakes, the Forggensee reservoir was created artificially by building a dam on the Lech River, there is a hydroelectric power station on the lake too.

The lake has ideal conditions for windsurfing, sailing, as well as other water sports, speedboat and boat rentals are available. For an additional fee, you can go fishing and try to catch trout, pike or eel that are bred in the lake. 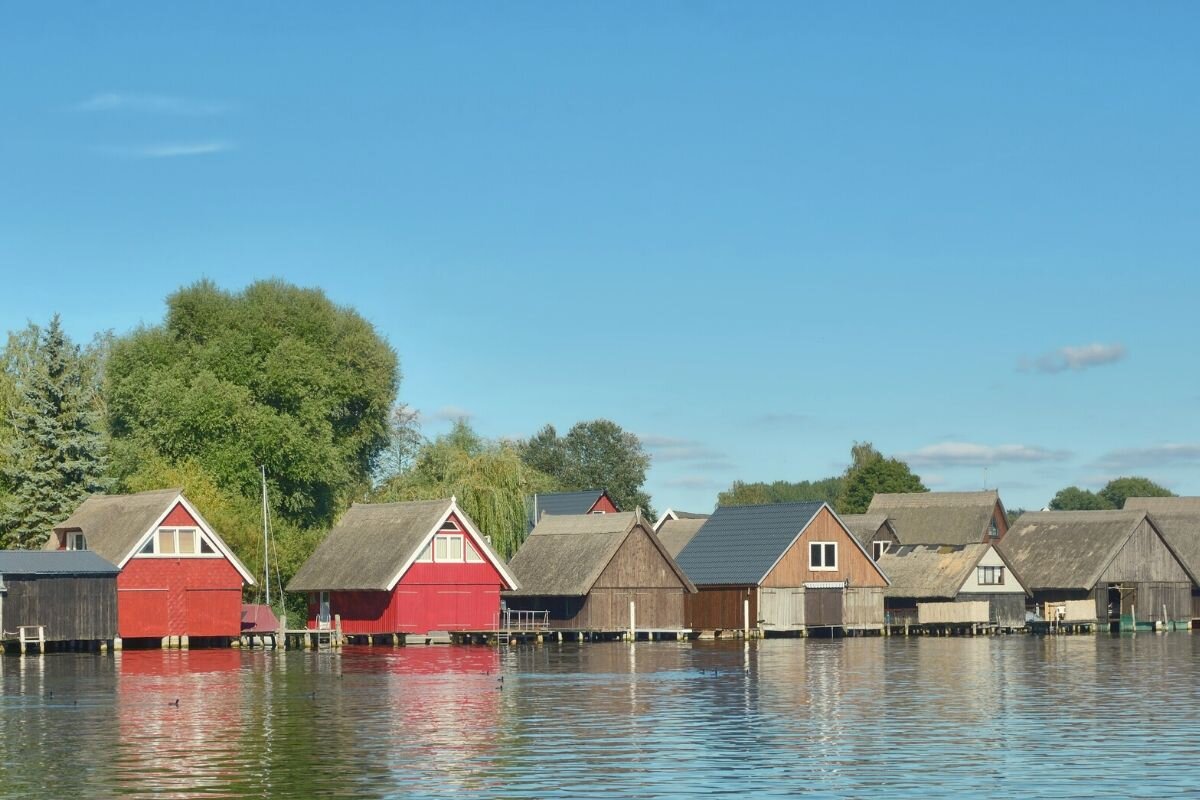 Lake Müritz, located in Mecklenburg, will conquer your heart with its huge size of 117 square kilometers, crystal water, and amazing fishing, a wide variety of flora and fauna. Mecklenburg is one of those cute little lake towns near Munich. The lake’s area is 117 square kilometers and there is a Müritz nature reserve on the east coast of the lake where you can see rare species of plants and animals.

You can also visit the small picturesque towns around the lake – Waren, Ankershagen, Rechlin, which will offer you many cultural attractions.

Schwansee Lake is one of the lakes surrounding the famous Bavarian castles of Hohenschwangau and Neuschwanstein. Schwanze is the smallest of them, but the most famous. It was a source of inspiration for P. Tchaikovsky’s famous ballet “Swan Lake”.

The Alpsee is a crystal clear lake, nestled between the castles of Hohenschwangau and Neuschwanstein in Bavaria. It is located about 4 kilometers southeast of Füssen.

You can take a boat trip or walk around the lake in just two to three hours. There are tourist vacation rentals on the coast which is perfect for a quiet family vacation.

6 Cultural Sites in Germany for your Bucketlist

The Most Beautiful UNESCO Sites In Hesse, Germany