Volcanoes, geothermal springs, alpine lakes, snowy mountains, limestone caves, fjords, sounds, forests, islands, beaches…it’s fair to say that New Zealand’s geographical features are some of the most diverse in the world. The country’s striking landscapes have enticed filmmakers and nature lovers alike to cherish its unspoiled horizons. Now it’s your turn to experience some of these exquisite terrains: here are 15 natural wonders you simply will not find elsewhere.

When you think of Fiordland National Park, Milford Sound is the first sight that comes to mind. But the breathtaking showcase of unspoiled wilderness along with its lesser-mentioned sibling, the Doubtful Sound, is definitely worthy of a visit too. Along with being the deepest, and quietest, of the area’s fjords, Doubtful Sound is filled with unique wildlife, flora, and fauna. Piha is the most famous of Auckland’s beautiful black-sand west coast beaches. Renowned for its cinematic appearance in the dramatic feature film The Piano, Piha’s natural remoteness makes it a desirable escape from the city rush. The area is surrounded by lush rain forests, along with comprising two surf beaches, a sheltered lagoon, a waterfall, and the Lion Rock that separates Piha’s northern and southern ends. Tongariro National Park is a UNESCO World Heritage Site that’s home to some of the land’s finest forces of nature. Volcanoes, active craters, glacial lakes, and astonishing alpine views have made this site a must-visit for hikers. In fact, the park is where you’ll find one of New Zealand’s ever-popular Great Walks: the alpine-based Tongariro Northern Circuit. 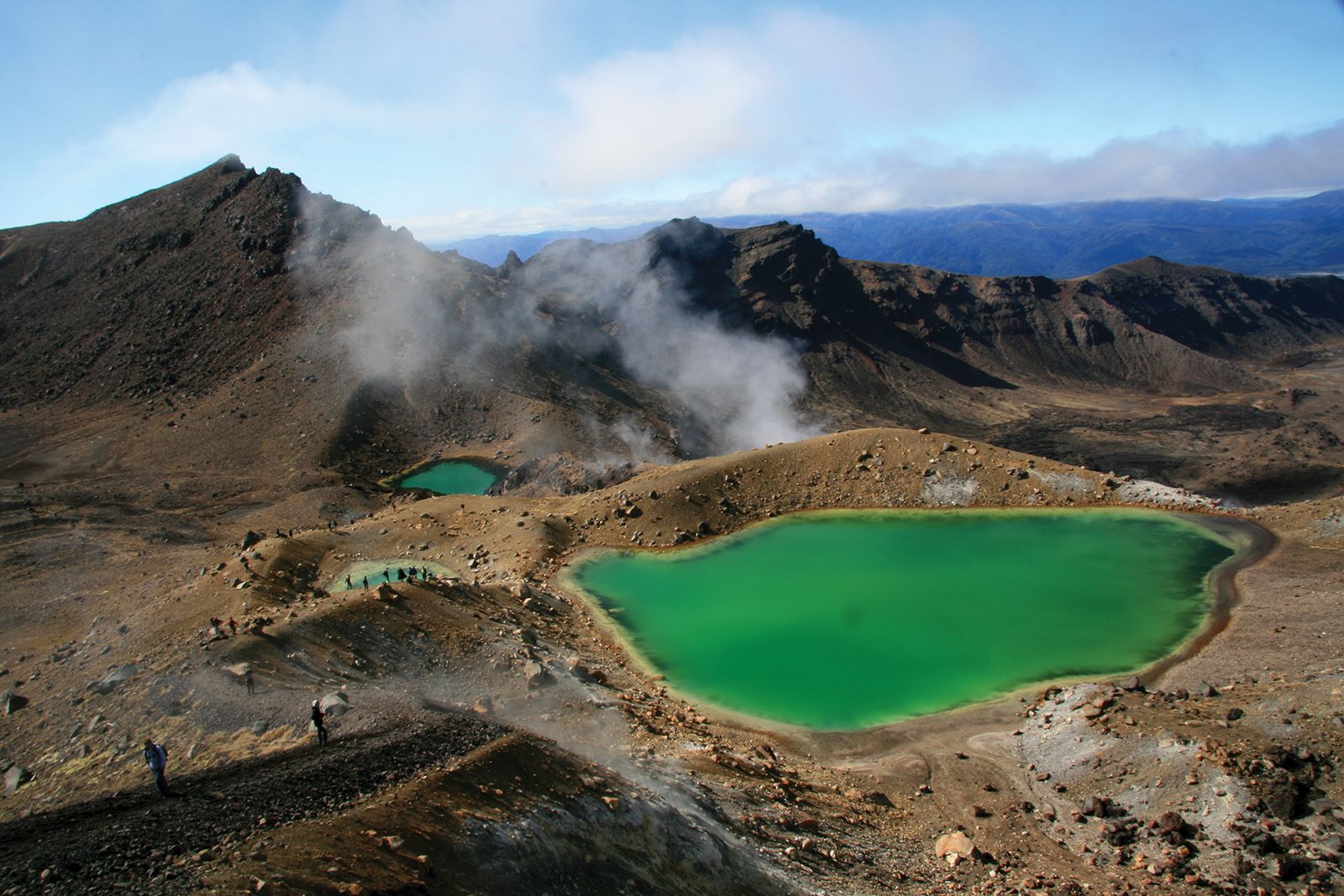 You don’t have to be an adrenaline junkie to fall in love with the Waitomo Caves. A cruise along the underground cave systems will bring you up close and personal to New Zealand’s unique glowworm species, the Arachnocampa Luminosa, who light up the limestone formations to create a sublime starry-night setting.

This national park is home to a number of exquisite mountains, including the two tallest in New Zealand: Aoraki/Mt Cook and Mt Tasman. The area is also home to two glaciers, the Hooker and the Tasman, and has a range of walking trails for hikers of all levels.

Rotorua is world-famous for its geothermal springs, and Wai-O-Tapu is the one that gives visitors the most to talk about. A collection of spouting geysers and intriguingly colorful pools invite travelers to cherish the natural masterpieces that can be carved out of centuries – if not millennia – of volcanic activity. 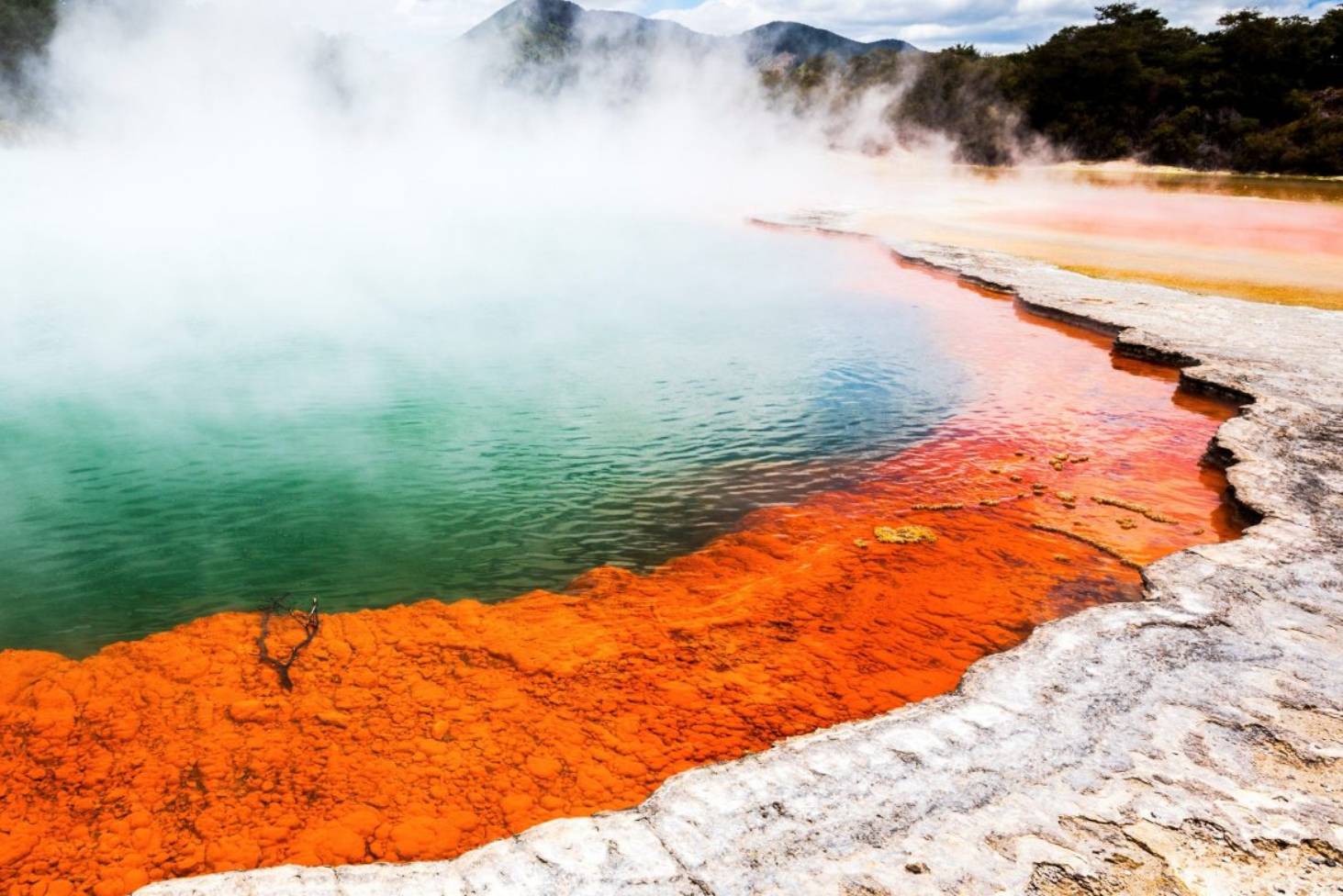 Venture into the South Island’s Otago coast to discover some of the largest spherical boulders you’ll ever see. Coastal erosion is the scientific explanation given to these compelling rock formations, but local Maori legends depict the Moeraki Boulders as the remnants of eel baskets, calabashes, and kumara (sweet potato) that were washed ashore after an ancestral canoe was wrecked along these shores.

The Mackenzie Basin in the Canterbury region is home to three glacially-fed lakes: Tekapo, Pukaki, and Ohau. These breathtaking lowland lakes are doused in a crystal-blue tinge as they are fed into the Godley, Tasman, and Hopkins Rivers, which subsequently flow into the Southern Alps. Also known as the Mackenzie Country, the basin is the largest in New Zealand. 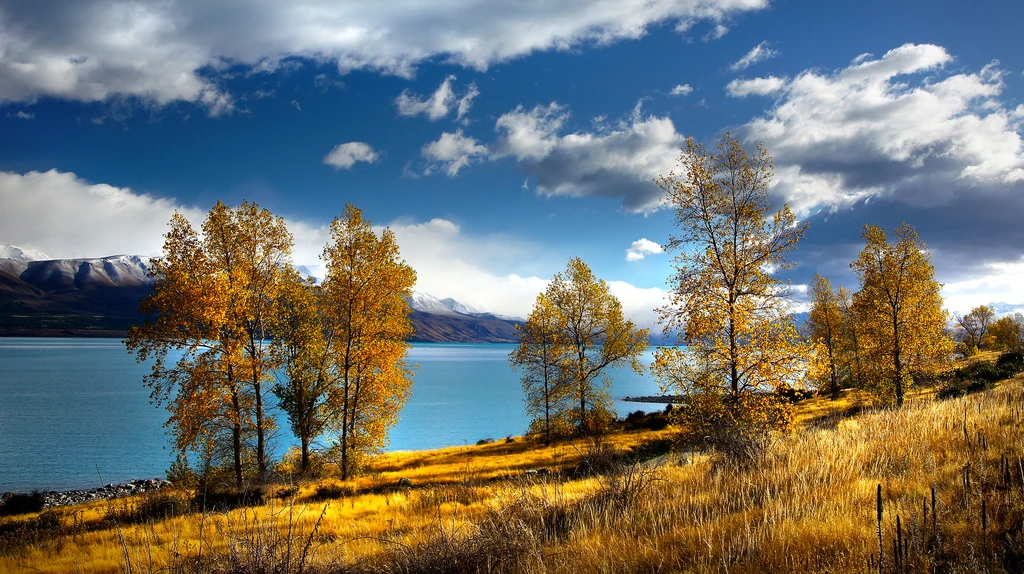 The aptly-named Remarkables mountain range dominates the beautiful backdrops around Queenstown. These majestic mountains are quite popular with local skiers in the winter months, and a year-round attraction for landscape lovers visiting New Zealand’s adventure capital.

Cape Reinga sits at the northern tip of the North Island. Many are deceived into thinking this is New Zealand’s northernmost point, but it’s the North Cape’s Surville Cliffs that wins the honor. Still, Cape Reinga is renowned for its lighthouse and spiritual Maori connection – local tribes believe that this is the place where people leave the Earth after passing. 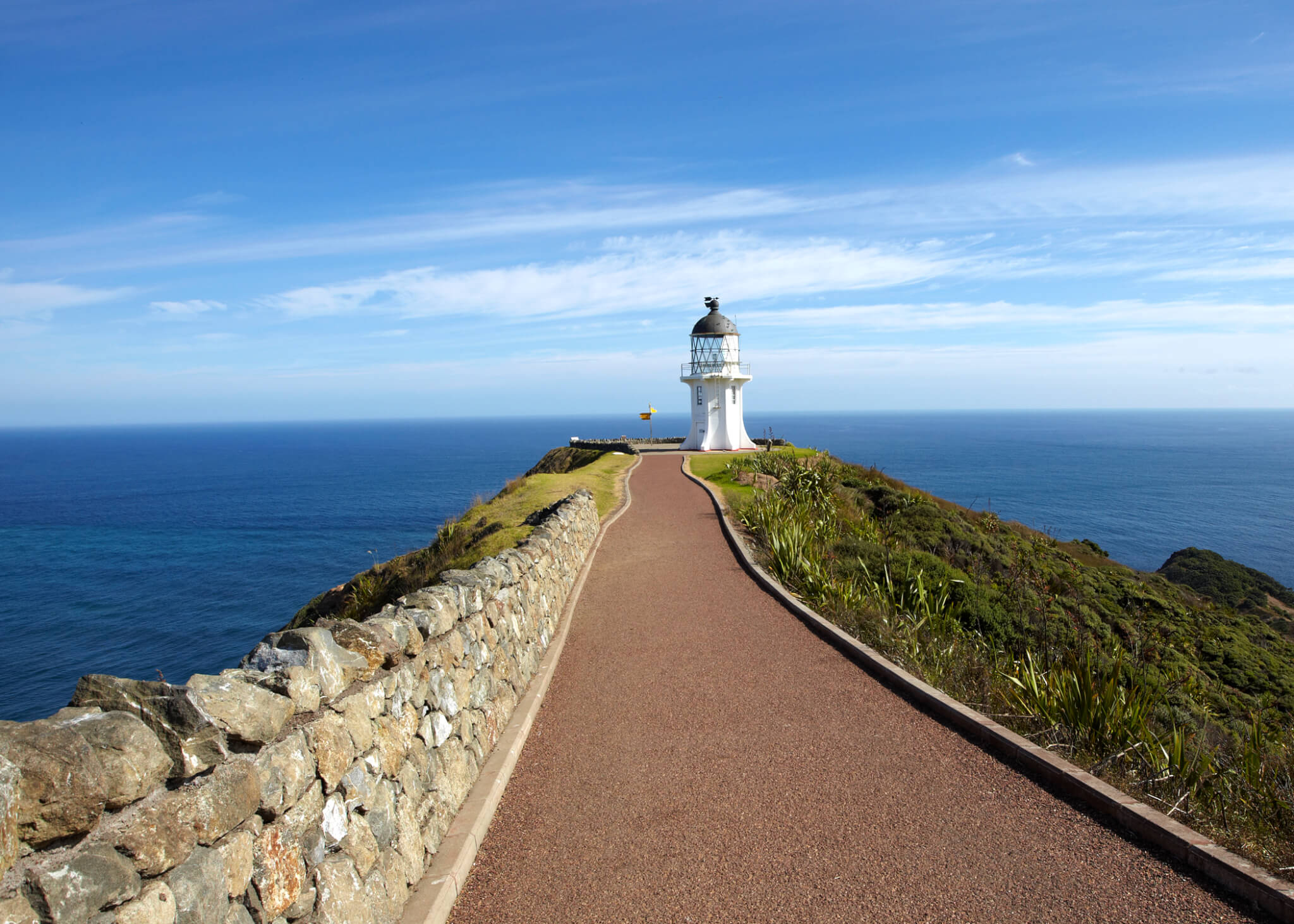 Located just a couple of hours from Auckland, the Coromandel Peninsula attracts local and international visitors alike because of its largely untouched coastal treasures. Highlights include the Hot Water Beach, Cathedral Cove, and the stunning temperate rainforest of the Coromandel Ranges. 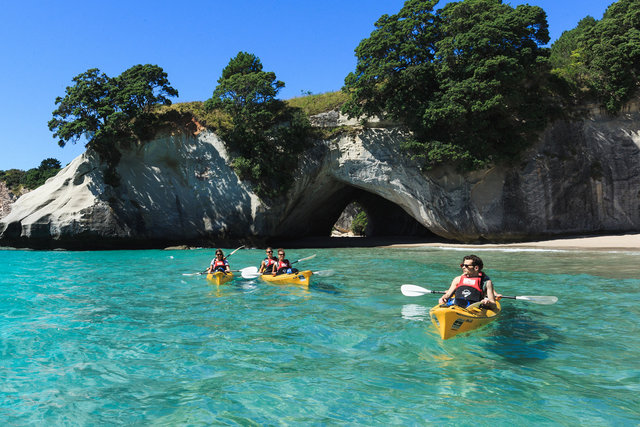 The three-tiered Purakanui Falls are an iconic feature of the South Island’s Catlins region. They are reached via a short 10-minute walk from the carpark of Waikato Valley, off the Owaka-Invercargill road. Part of the river’s outflow goes straight into the Pacific Ocean, and the waterfalls are enveloped by native plants like podocarp and silver beech.

A collection of rugged, turbulent beaches contours the western part of the South Island. The windswept West Coast scenery is composed of a myriad of contrasting geological features, including the Punakaiki Pancake Rocks, Haast Pass, Fox, and Franz Josef Glaciers, as well as the Heaphy Track and the Tasman Sea.

A hiker’s, kayaker’s and boat lover’s paradise, Abel Tasman National Park is a definite must-visit for those traveling around the Nelson/Tasman region. Hidden beaches are a strong part of the area’s mass appeal: the pristine golden sands and emerald green waters are guaranteed to leave a long-lasting impression. With a wonderful mesh of high mountains, river valleys, and remote wilderness, Mt Aspiring National Park is a World Heritage site that offers its explorers plenty of hiking and rock climbing opportunities. Its namesake mountain is a spectacle in itself, comprising glistening glaciers, lush beech forests, braided rivers, and wondrous waterfalls. 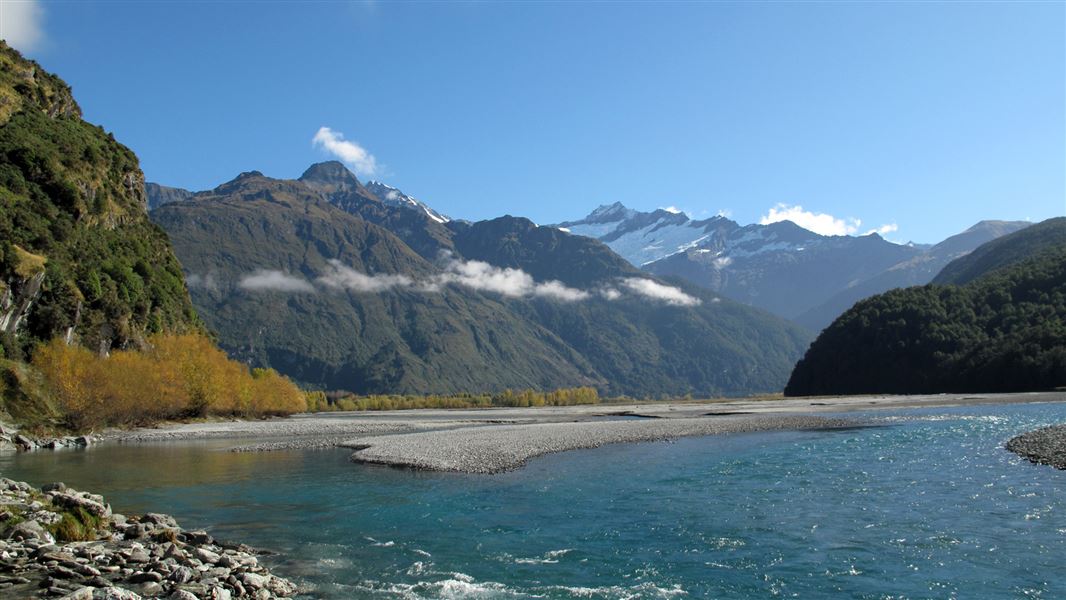 The 10 Most Important Historic Sites in New Zealand

The 15 Best Places to Visit in New Zealand