You don’t have to only like mountain climbing to visit the Harz Mountains. In fact, it’s better if you like toy towns with fairytale castles, UNESCO World Heritage Sites, fortresses and monasteries from the Middle ages or seeing wild animals in their natural habitat. So what are you waiting for? Here’s our list of things to see and do in this spectacular part of the world.

Take in the beautiful architecture 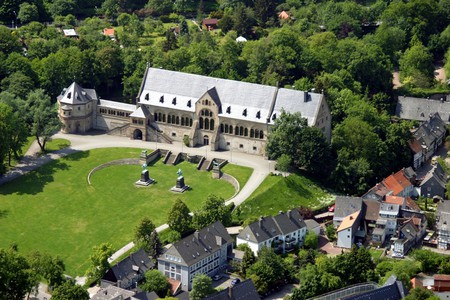 One of the best-preserved towns in the world, the former Imperial city of Goslar is a UNESCO World Heritage Site. Once an administrative outpost of the Holy Roman Empire and a thriving mining economy, the town now houses some of the most beautiful public buildings in Germany. In Goslar’s case, 1500 half-timbered houses, a Romanesque church, a highly elaborate Rathaus and, of course, a massive palace. It’s also home to various stone houses, known as bowers, that were built in the 12th century. 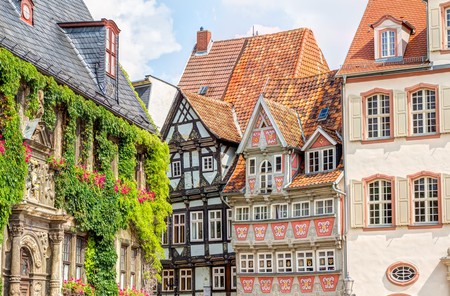 With the combination of Gründerzeit and Art Nouveau villas, the Old Town of Quedlinburg makes for a highly Instagrammable destination. It’s the number and high quality of the timber-framed buildings that convinced UNESCO to declare Quedlinburg an exceptional example of a medieval European town. Come Christmastime, the town is replete with festivities and twinkling lights. If medieval religious relics are your thing, then the Collegiate Church St. Servatii on the castle hill is a must-see. This ‘masterpiece of Romanesque architecture is home to some of the most valuable trinkets of the Middle Ages. 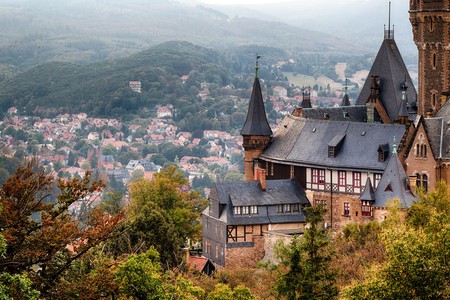 Wernigerode was first mentioned in official records in 1121. Wandering through its picturesque alleys, visitors can gaze at the examples of traditional architecture; a spectacular town hall with a timber facade, the ‘crooked house’ with a tilted foundation, and the city’s smallest house, which is only three metres wide and just over four metres tall. High above the city, and visible from afar, Castle Wernigerode lures you into a fairy tale of its own.

Centre of religious power and influence 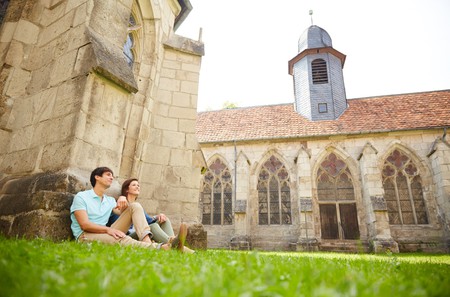 You’ll find many churches and monasteries nestled in the Harz Mountains. Visit one of the most valuable and comprehensive collections of church treasures outside the Vatican, housed in the Halberstadt Cathedral of St Stephen and St Sixtus. Alternatively, if you want to enjoy some time outdoors, take a stroll through the beautiful gardens of the Brubeck Monastery, once a nunnery. In the southern Harz Mountains, the Cistercian Monastery Walkenried used to be the most influential church in North Germany, but today it’s home to a large museum where you can dive into the history of monastic life. You can also see brewing traditions and centuries-old recipes from the Middle Ages come to life in the Woeltingerode Monastery near Goslar. 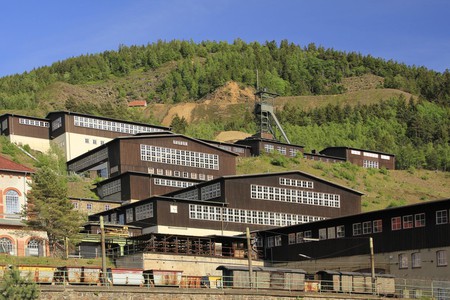 For 3,000 years or so, much of day-to-day life in the Harz Mountains took place underground. Central to this significant period is the Rammelsberg Mine in Goslar, which operated continuously for more than 1,000 years. Since its closure, the site has transformed into a monument celebrating manual labourers and man’s ingenuity, offering tours above and below ground. When granted UNESCO status along with the Old Town of Goslar in 1992, the Rammelsberg Mine became Germany’s first UNESCO World Heritage Site of technology. Eighteen years later, the Upper Harz Water Management System was added to the UNESCO ensemble, stretching it across an area of over 200 square kilometres. Today, visitors can explore this unique site through guided hiking tours across the 107 lakes and 310 km of water ditches.

Explore nature at its best 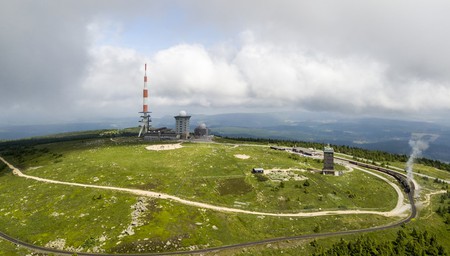 The Harz National Park occupies 247 square kilometres, 95% of which is spruce and beech forest. Here nature is left to its own devices, creating refuges for wild plants and animals. Mount Brocken, the highest peak in northern Germany, is covered in mist for roughly 300 days out of the year. Make your way straight to the top for a chance to Instagram the spooky optical illusions created by your shadow being cast onto the fog. A once in a lifetime experience. 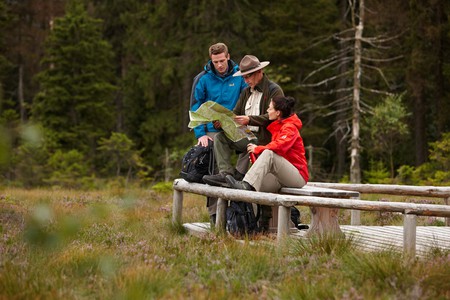 Explore unspoilt forests, deep valleys and lush meadows by choosing from over 9,000 kilometres of hiking trails, many of which have inspired poets in the past. The Goetheweg is a trail up the Brocken, and follows the path German poet Johann Wolfgang von Goethe took when he climbed the mountain in 1777; and the Devil’s Path, beginning in Bad Harzburg and passing the Brocken, ends in Elend. 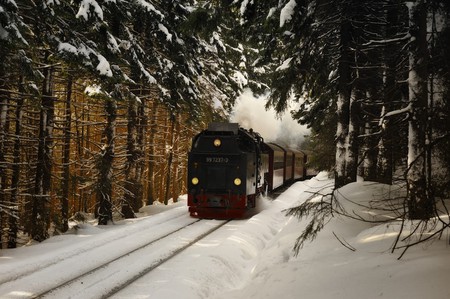 Not a hiker? Luckily for you, the Harz Narrow Gauge Railways operate a fleet of 25 steam locomotives and historic coaches, which take you through the countryside and offer jaw-dropping vistas of the mountain peaks. Train enthusiasts can enjoy the thrill of riding a unique steam engine, while also taking the opportunity to snap some stunning photographs, as the train circles the mountain one and a half times before stopping at the top almost 50 minutes later. 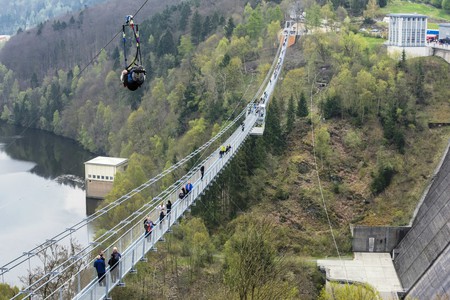 Mountain bike fans will fall in love with the mountains’ surrounding landscape; over 2,200 kilometres of narrow trails, forest track and rocky passages with jumping opportunities, as well as five bike parks, put your technical abilities on trial. At the Rappbode Dam, ride the Mega Zipline, which reaches a speed of up to 55 miles per hour. Alternatively, take a steep walk down Germany’s largest concrete dam or experience the Gigaswing, a 75-metre drop from one of the longest pedestrian suspension bridges worldwide. 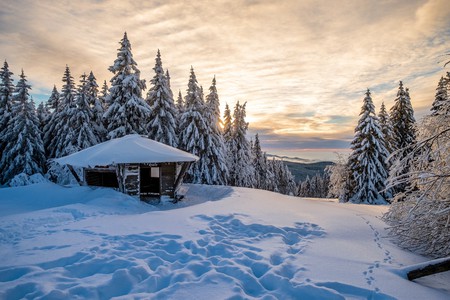 Although the Harz Mountains are not the Alps, the snow-covered areas allow for guided sledge dog tours, tubing, snowboarding, skiing and skating on the lake. Fans of cross-country skiing can experience the beauty of the winter landscape, making use of 500 kilometres of trails. Don’t miss a truly authentic experience – tobogganing using a traditional wooden sledge. 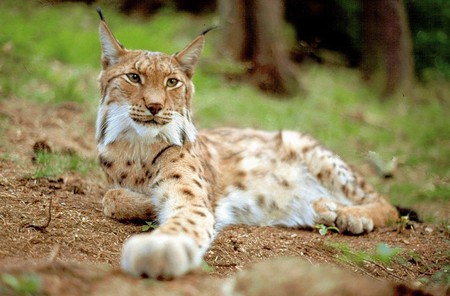 On a clear day, you can watch peregrine falcons glide from thermal to thermal until they are hungry enough to pounce on any unfortunate rabbits wandering the area. In the forest itself, keep an eye out for red deer, roe deer and wild boar – as well as lynxes, which, although hard to spot, have recently been re-introduced to the area. Or you can accompany one of the Harz National Park rangers to watch the magnificent stags fight each other during rutting season.

Learn the myths and magical tales of the Harz underworld 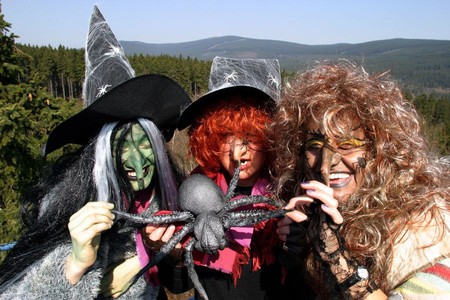 Given its remote geographical location and relative isolation, masses of spooky, dark forest mean that local folklore in the area is all about ‘witches, warlocks, fire, brimstone. Otherworldly activities supposedly peak on April 30 during the Walpurgisnacht (May Day’s eve) celebrations. Towns and villages in the Harz Mountains follow each their own Walpurgis traditions. The most famous celebrations are the ones held in Schierke, the last stop on the Brocken train before the summit, and in Thale with the legendary Witches Dance Floor. Join in, if you dare.

Take a history lesson on the Iron Curtain 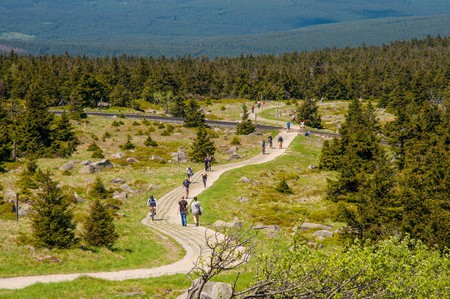 Most tourists know about the Berlin Wall, but few have any idea what the division throughout the rest of the country looked like. Nowadays, due to its high biodiversity, the area that was previously known as the Iron Curtain acts as a greenbelt. Barbed with two rows of twin electric fences, the now open-air museum in the former border village of Sorge once formed part of the barrier that divided the country. Visitors will gain a snapshot into a past that isn’t taught in textbooks.

Visit the town that gave birth to revolutionary thinking 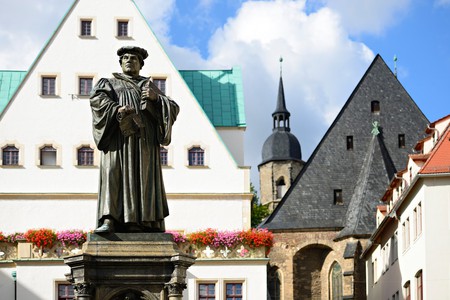 If learning about the Iron Curtain and the Cold War wasn’t enough, the Harz Mountains were also home to one of the most famous figures of the Protestant Revolution, Martin Luther. Lutherstadt Eisleben, where Luther was born in 1483, prides itself on being the original birthplace and source of inspiration for the first waves of the Protestant Reformation. As ‘authentic locations of the Reformation of outstanding universal significance, the local Luther memorials were given UNESCO World Heritage site status in 1996.

Pour him a Ca-pooch-ino! German Shepherd launches into excited frenzy whenever owner mentions the word ‘coffee’