Get ready to take a journey through some of the finest historic towns in Scotland.

We are asked time and again for our ultimate list of the most beautiful and historic towns in Scotland. It is difficult to narrow it down to a select number of places when you consider that Scotland boasts so many towns renowned for their history, as well as plenty of lesser-known hidden gems. It’s a tough choice to make, but here is a helpful list of some of the country’s finest historic towns. 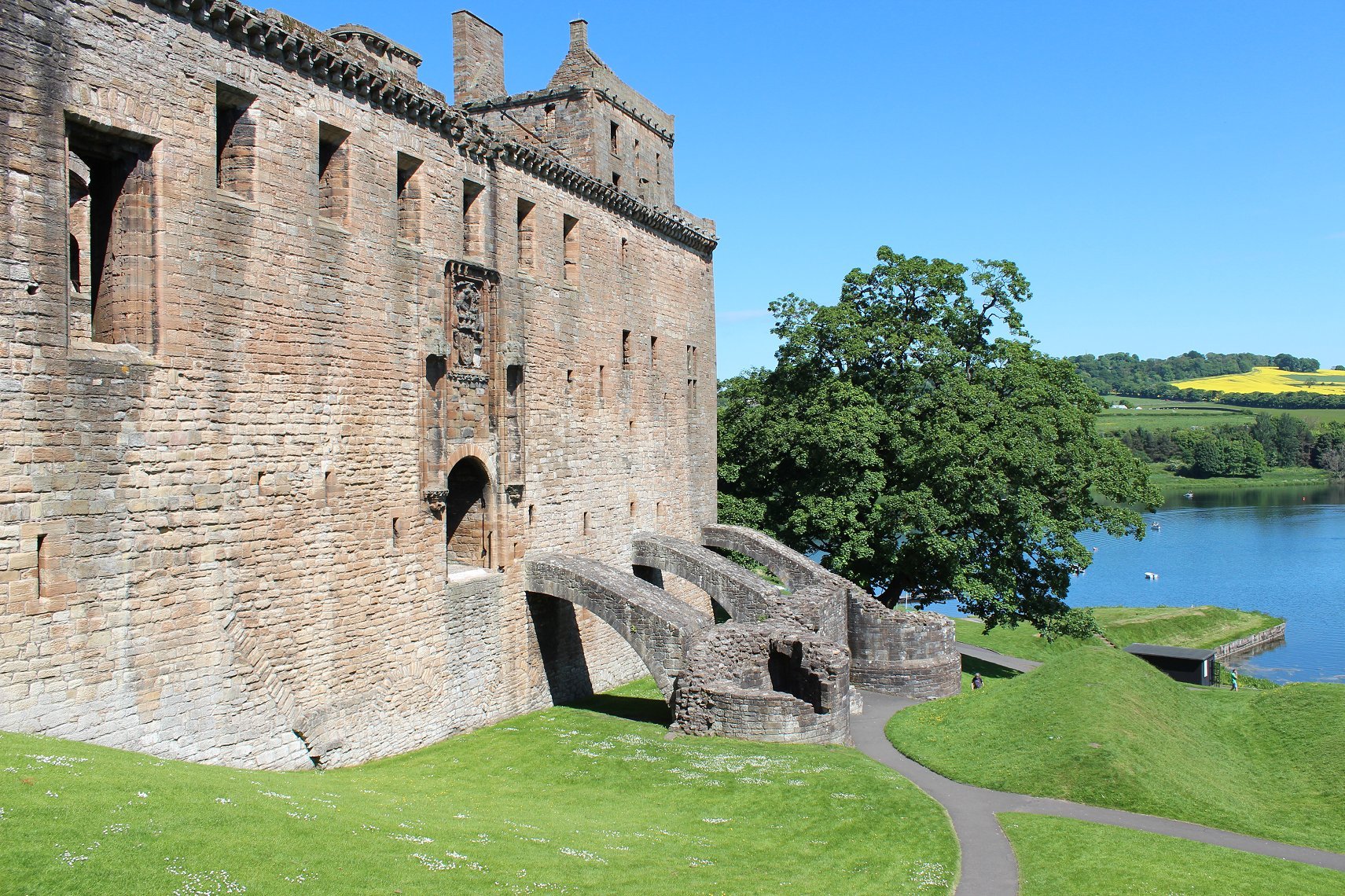 Located approximately 19 miles from Edinburgh, Linlithgow is what is known in Scotland as a ‘royal burgh’, a special title granted by King David I in 1130 which endowed the town with certain rights and privileges. The magnificent shell of Linlithgow Palace overlooking the loch harks back to its regal past when the Stewart kings and queens resided here during the 15th and 16th centuries. The south side of its High Street survives mostly intact with some buildings, including independent shops, pubs and cafés, dating as far back as the 17th century. You can discover more at the new Linlithgow Museum in the town’s High Street, which opens in spring 2019. 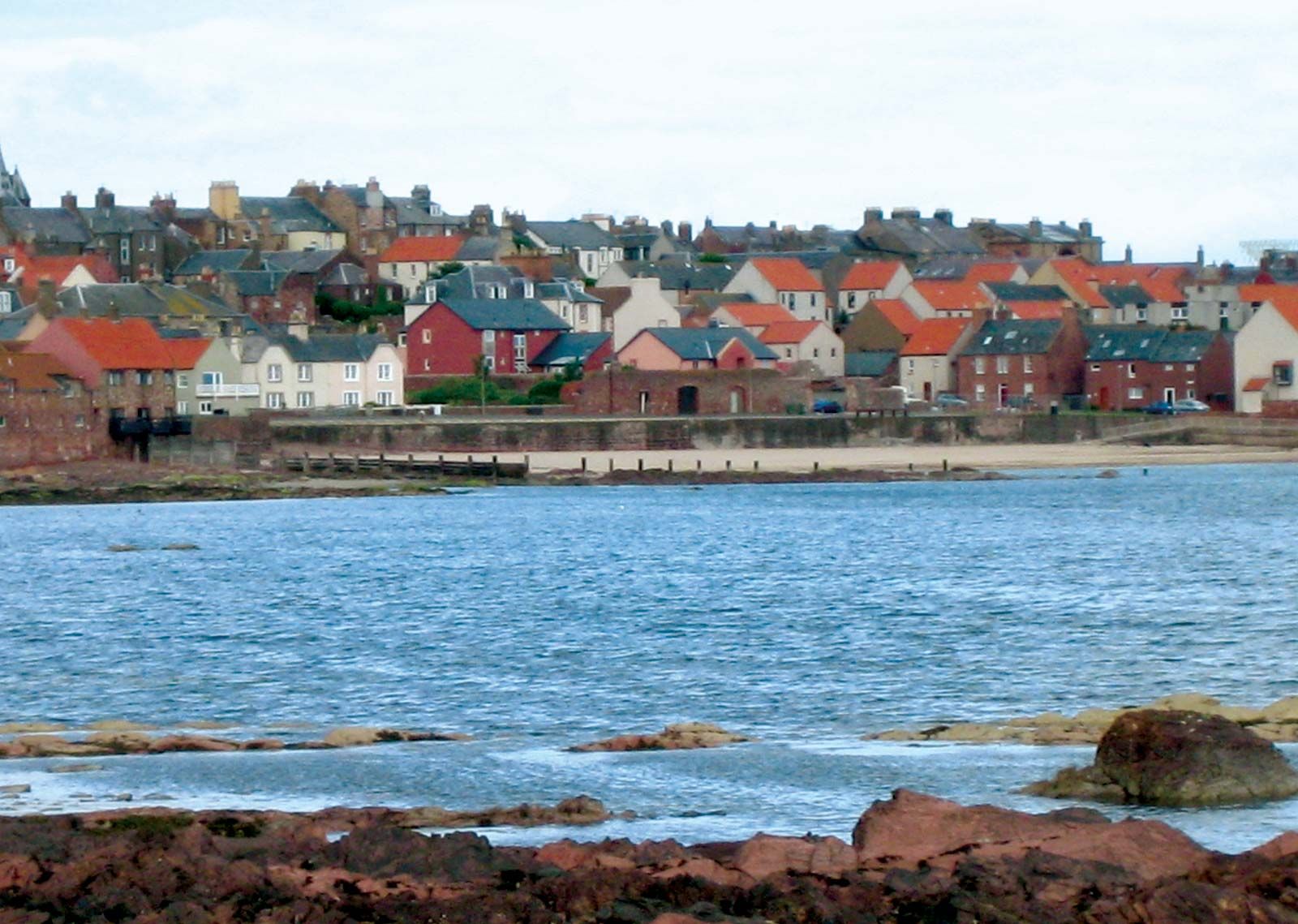 It may not be as well-known as its grander neighbor North Berwick, but this seaside town with its natural red sandstone harbor and the remains of what was the mighty fortified Dunbar Castle is worth a day trip. The High Street is pleasingly well-preserved with colorfully painted buildings and an eclectic array of local businesses, some of which have been trading for generations. Pay a visit to the old Town House or Tolbooth, now John Muir’s Birthplace, a museum that celebrates the life and legacy of the world-renowned naturalist. And wander the windswept Belhaven Bay with its iconic landmark, a beautiful cast-iron bridge named ‘The Bridge to Nowhere’ by locals. 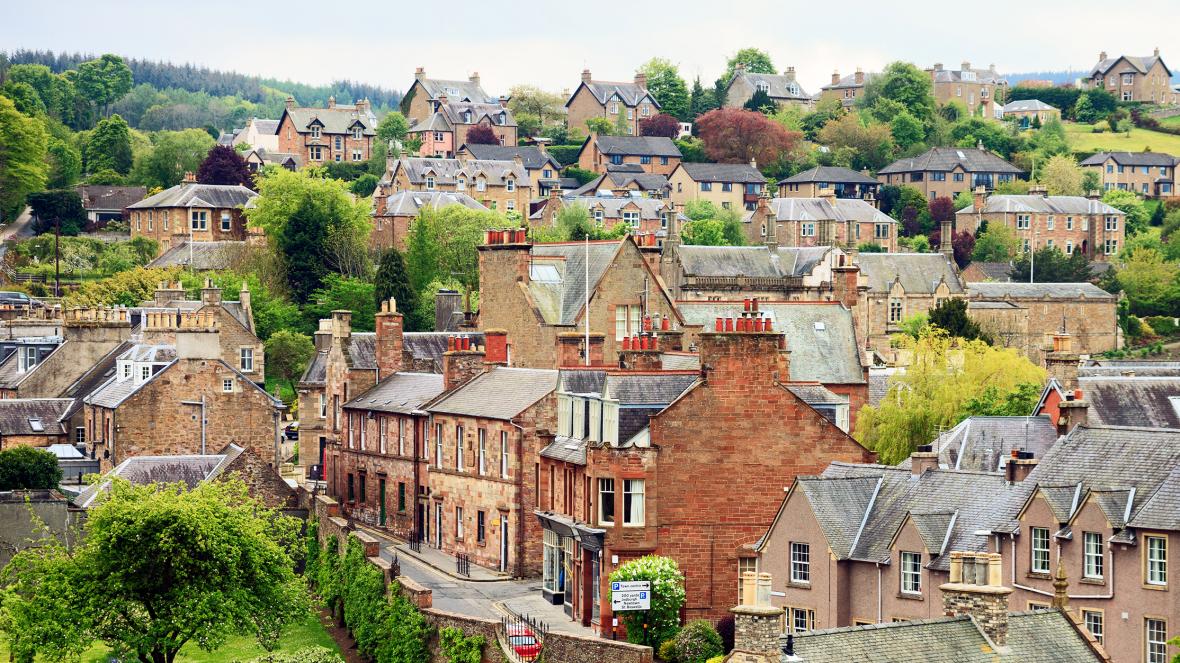 Melrose is a town steeped in beauty and legend. A short walk from its bustling medieval marketplace, with its unicorn-topped Mercat cross, stands the serene ruins of one of the great Borders Abbeys, Melrose. Built by Cistercian monks in the 12th century, it is believed that a lead casket unearthed by archaeologists here contains the embalmed heart of Robert the Bruce. You can learn about the abbey at the Commendator’s House Museum, home to the largest collection of medieval artifacts on display in Britain. Melrose is also located near to Abbotsford House, the beloved home of the great romantic novelist Sir Walter Scott, and the remains of the Roman settlement of Trimontium.

Castle Douglas is an ideal base for visitors exploring south west Scotland. It is also a designated Food Town with around 50 businesses serving and selling delicious locally grown produce. Just to the southwest of the town is Threave Garden, run by the National Trust for Scotland, and just over a mile to the west is Threave Castle, spectacularly located on an island in the River Dee.

Nestled in the lowland region of Dumfries and Galloway, nearby Castle Douglas on the banks of the River Dee, Kirkcudbright was a former site of pilgrimage and became a royal burgh in the 15th century. Today, this country town has grown into a thriving artists’ colony which encircles the ruined MacLellan’s Castle. Many of the Scottish Colourists spent time working in Kirkcudbright, including Samuel Peploe and Francis Cadell. Visit Broughton House, the former home of Scots impressionist artist Edward Atkinson Hornel, now a museum dedicated to his life and work. The Tolbooth is now an arts center, while the newly opened Kirkcudbright Galleries is situated in the former Town Hall.

Officially classified as a town, these two Perthshire communities set on the banks of the flowing River Tay retain a distinctly ‘village’ atmosphere. Boasting both a cathedral and the remnants of the ancient wood depicted in Shakespeare’s in Macbeth; artists, writers and even royalty have long been drawn to the town’s rich heritage, natural beauty, salmon fishing, and Shakespearian connections. Admire the beautifully restored houses on a walk down Cathedral Street and around The Cross, and cross the bridge over the river to find the path leading to the Birnam Oak.

Elgin is one of the most picturesque towns in northern Scotland. In the 14th century, Scottish royals would holiday here on account of its dry and balmy – by Scottish standards – climate. It remains a popular place for visitors exploring Moray who comes wander its genteel Victorian streets lined with elegant houses of grey stone, browse an array of independent shops, and stop for lunch or a coffee in one of the cozy pubs and cafés. Highlights include the cathedral known locally as ‘The Lantern of the North’ which boasts stunning views from the top of its tower, and old-fashioned independent bookshop Yeadons Bookseller and Stationers.

The delightful fishing town of Pittenweem has to be one of the most unspoiled spots in Scotland. Located on the east coast in the East Neuk of Fife, its name is said to be derived from the ancient language of the Picts and means ‘Place of the Caves’. Over the centuries it became an important trading port for ships carrying cargo from the Low Countries, and in 1541 James V granted the town the status of the royal burgh in recognition of this. Admire the pretty buildings and you can still find traces of this European influence with plenty or red and white architectural details and charming crow-stepped gables reminiscent of Holland and Belgium. 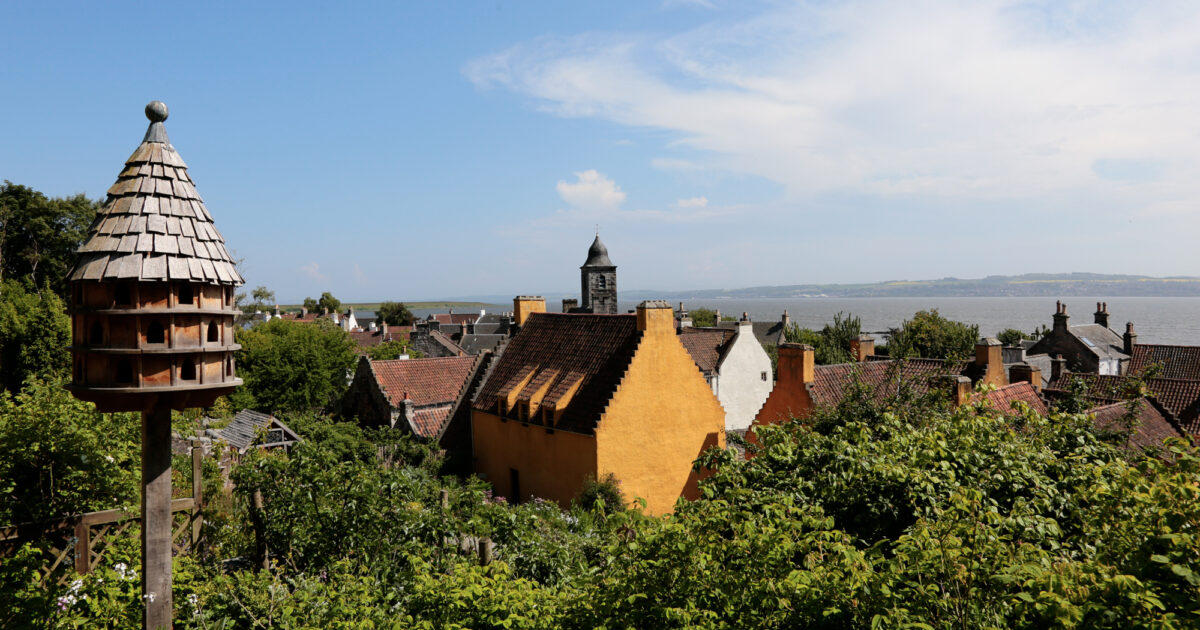 As you leave the East Neuk and head towards Fife’s south-western tip of Fife, you will arrive at Culross which you might recognize from Outlander. Lovingly maintained by the National Trust for Scotland, a visit to this cobbled town is like traveling back in time. There is a 13th-century abbey, a 16th-century mustard-yellow palace which was a favorite of Mary Queen of Scots with a flourishing kitchen garden, and a 17th-century townhouse; all open to the public. Once you’ve finished exploring, visit the Biscuit Café at Culross Pottery and Gallery for delicious organic pies and cakes and fragrant specialty teas. 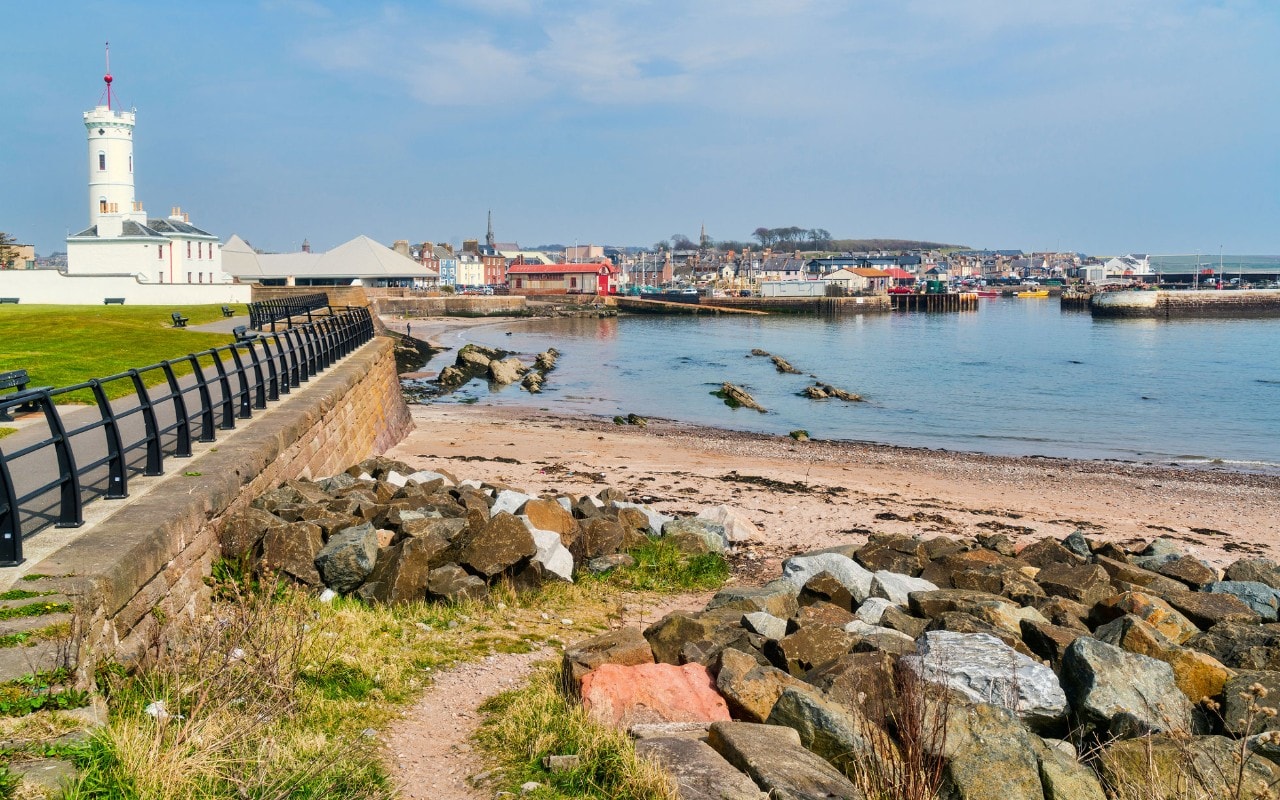 The Declaration of Arbroath is an important document in Scottish history that declared Scotland’s status as an independent sovereign state. Its name is derived from the abbey where it was written in 1320. The red sandstone ruins of Arbroath Abbey with its distinctive ‘Round O’ window is the town’s main attraction, but there is plenty more to see. Wander the pretty harbor, explore inside the Georgian Signal Tower Museum, and try an Arbroath smokie – a succulent smoked haddock and a local delicacy.

The town of Dunfermline flourished during the 11th-century reign of Malcolm III and saw the founding of its great Romanesque abbey by his wife Saint Margaret. From then until the 15th century it was the capital of Scotland and a stronghold of royal power. The abbey ruins and the remains of the once-great palace still inspire awe while the cobbled streets and antiquated buildings including Abbot House (currently closed for renovations) are a pleasure to explore on foot. Dunfermline is also famous for being the birthplace of the American steel magnate Andrew Carnegie who rose from humble origins to become the richest man in the world. You can visit the cottage where he was born at the Andrew Carnegie Birthplace Museum.

Set on the shores of Loch Fyne, Inverary is what is known as a ‘planned’ town which was designed and built by the Duke of Argyll in the 18th century. Consequently, Inverary possesses a grandeur that makes it unique among Scotland’s small historic towns. The town’s Front Street and harbourside are remarkably pretty while the Georgian Inverary Jail is now an intriguing museum. Other notable landmarks include All Saints Church, the 38 meter-high Duke’s Tower which you can climb to the top, and the Inverary Cross at the harbourside, an ornately carved stone pillar dating from the 12th or 13th century. 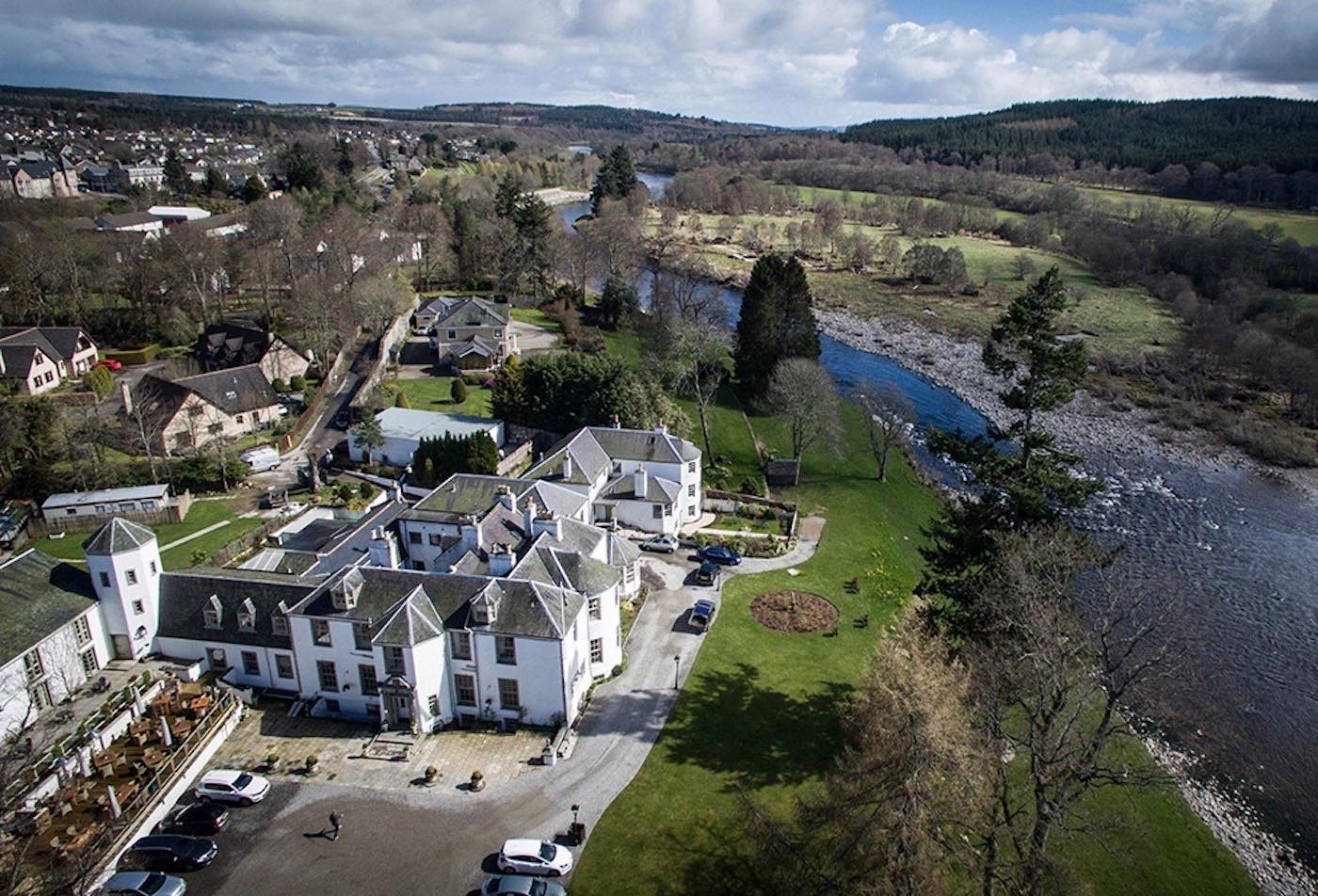 The gateway to Royal Deeside, the wee town of Banchory is usually somewhere visitors stop on their journey through Aberdeenshire. There are plenty of castles to explore and unique golf courses to play in the area, but make sure you allow enough time to immerse yourself in this delightful town. Perched on slopes above the banks of the River Dee, outstanding restaurants which serve dishes prepared using the region’s exceptional local produce, while beautifully maintained streets and buildings stand practically unchanged since the Victorian era. It also boasts one of the region’s best-kept secrets: the spectacular Falls of Feugh where salmon return each year to battle their way up against the rushing water of the rivers Dee and Don. 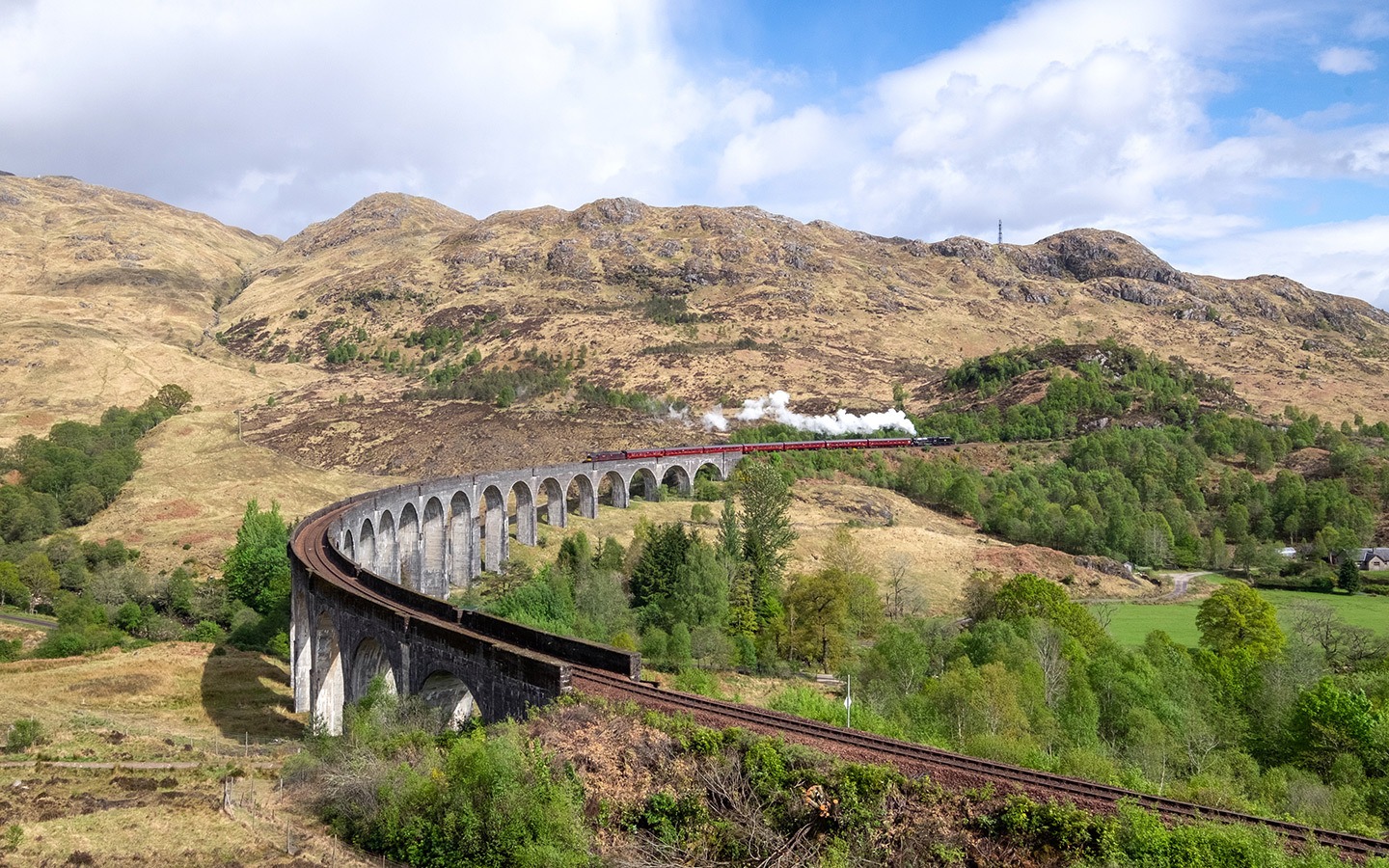 Blessed with some beautiful natural landscapes in the world, Fort William allows access to many scenic Highland walks and makes an excellent base for visiting landmarks such as historic landmarks such Old Inverlochy Castle and the Commando Monument, or for Harry Potter fan to hop aboard the Jacobite steam train. Set against the towering backdrop of Ben Nevis with its elegant Victorian townhouses and villas overlooking Loch Linnhe, the town of Fort William is home to historic hotels, traditional pubs and restaurants, charming churches, and the West Highland Museum filled with Jacobite artifacts and other treasures.

Sunny or rainy? Find fun things to do come rain or shine

Hidden Things to See and Do in Edinburgh