There are so many fantastic and amazing things to see in Porto. I’d even go as far as saying it’s is one under-rated Portuguese gem.

Scratch that! This ‘under-ratedness’ (not a real word) is perhaps less and less so.

Everyone seems to be pretty clued up more and more these days on how a visit to Portugal is much needed on the good old travel plans.

For those that still need a bit of convincing on things to see in Porto, here’s a quick lowdown.

Porto is the second-largest city in Portugal, one of the oldest in Europe, well its Port wine (hello!) and with an old city centre that’s so amazing its been declared a UNESCO World Heritage Site.

There’s a treasure trove of things to see in Porto and we’ve got some of the essential vying for your attention.

Known for being the riverside quarter of Porto, Cais da Ribeira is the place to come if you want to stroll along sun-dappled streets. The quayside has a plethora of cafes and restaurants to choose from and fresh seafood is usually the order of the day.

There really are loads of things to see in Porto – especially around this quarter.

2. The Church of St Francis 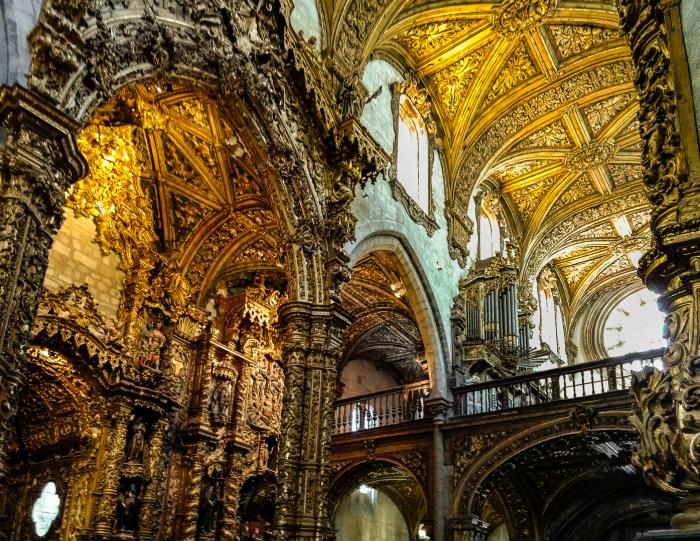 This 18th-century Baroque-style church is known for being one of the glitziest sites in Porto (do people still say glitzy?).

The intricate Gothic architecture and long history have all culminated in this being recognized as a UNESCO World Heritage site. As well as pretty mandatory travel viewing.

You can’t go far in Porto without catching a glimpse of this Baroque tower that dominates the skyline.

It is possible to climb to the top of the tower but seeing as its 240 steps to the top, you might wanna limber up first. (Don’t worry, you’ll be rewarded with a great view of the city once you get to the top). Crossing over the Douro River, the Dom Luis I Bridge is one of the most iconic sights in Porto due to its sheer size. This has to be one of the biggest things to see in Porto; at least by size.

The bridge was built by a student of Gustav Eiffel, of Eiffel Tower fame, and is similar in style and design.

You can walk across the top of the bridge and in fact, I’d highly recommend it as it has got one of the best views in the city.

The former stock exchange of Porto, Palácio da Bolsa building dates back to the 19th century. Although, fairly young when you think of it and yet it is one of the city’s best known historical gems.

There are several staterooms that you can tour inside including the famous Portrait Gallery so be sure to leave enough time to explore this place fully. 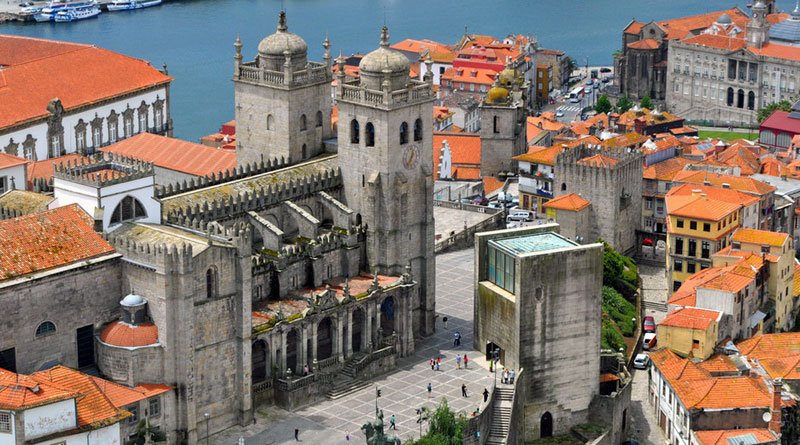 Porto Cathedral is one of the oldest sights to see in the city and one of its most important.

It’s almost 800 years old and the architecture here is without a doubt, quite the sight to behold. When you visit, be sure not to miss the real reason to come here, the gold and silver vaults in the Treasury.

Okay, maybe not the main reason to visit but it’s still a pretty good one.

Porto’s national museum is not to be missed by those who are even vaguely interested in the history of Portuguese art.

The comprehensive collection here dates from the 16th to the 20th century and features paintings, porcelain and even furniture. To mention but a few.

If you find that it’s raining in Porto when you visit, this is easily the perfect place to while away the time as you wait for the rain to clear. See, there are even things to see in Porto when those downpours occur.

Carmo Church is one of the most iconic in Porto thanks to the white and blue tiles that make up its façade.

The inside, however, is equally beautiful so do pop in when you’re in the city.

You can’t miss Cafe Majestic as you walk past, which is probably for the best as you definitely need to visit this almost 100-year-old cafe in Porto.

It’s got a beautifully colorful history and is a fun little way of tapping into some of Porto’s history and culture.

Mosteiro da Serra do Pilar not only has one of the best views of the city. It’s also a UNESCO World Heritage site to boot. You can hike up here from the city centre or if you’re feeling lazy take the funicular (see below) to the top.

When you’re done here, you should definitely walk across the Dom Luis I Bridge (if you haven’t already). A glass of wine beside the river is an important part of any trip to Porto (if you want to one-up’ this, go for lunch or dinner by the riverside).

The Douro river is the same one that feeds the famous Douro Valley – home to some of Portugal’s best wines!

I would normally not recommend visiting railway stations – partly because, they’re not always that pretty.

To be honest, it is also partly because chances are that you arrived there in the first place but São Bento Train Station is definitely an exception to the rule.

This station is a beautiful example of stunning Portuguese architecture.

This bookshop in Porto is a rather special one – it’s one of the oldest, not just in the city but in all of Portugal and is so intricately and ornately designed inside, its worth a gander, even if don’t care much for bookshops.

In fact, I’d say think less ‘bookshop’ and more ‘grand hall’ when it comes to this one.

If you don’t care much for climbing mountains but still want a great view of the city, the Funicular is definitely the way to go.

Not only will this save you the hike up to Mosteiro da Serra do Pilar and the top of Dom Luis I Bridge, but it also offers pretty great views of the city as you ascend the mount.