Gorgeous canals, tulip fields, cute clogs, endless cheese… and that’s only scratching the surface of what makes the Netherlands so irresistible. From the vibrant cities and masters of fine art to the beautiful countryside and delicious food, here are 13 reasons why you’ll fall in love when you travel to the Netherlands. 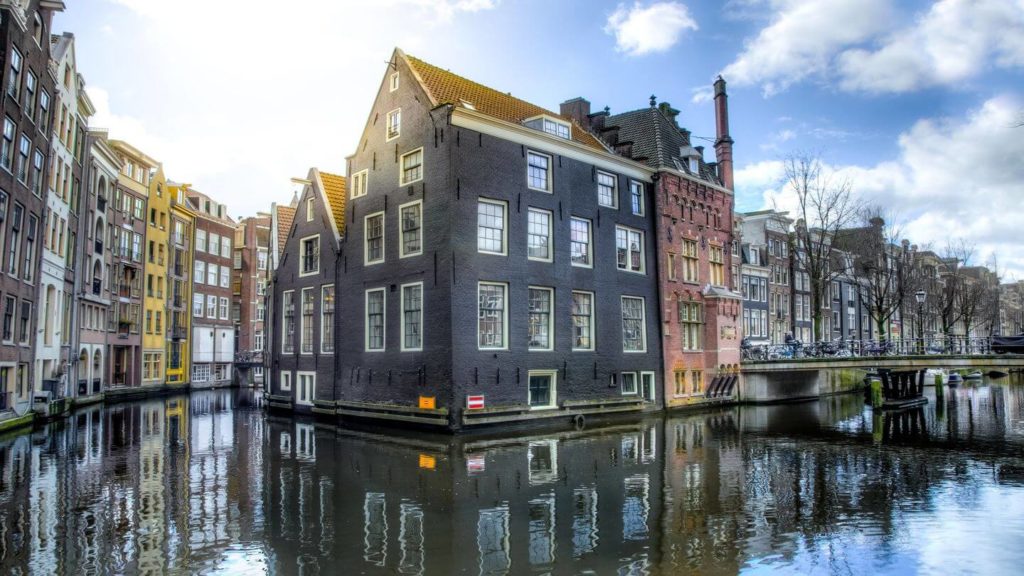 Amsterdam is the most famous Dutch city and one of the world’s most visited cities, thanks to its picturesque canals, world-class museums and lively nightlife. But Amsterdam is just a fraction of what the Netherlands has to offer. Other fantastic cities include Rotterdam, a port city with fascinating architecture, while Utrecht has pretty canals and gothic architecture. 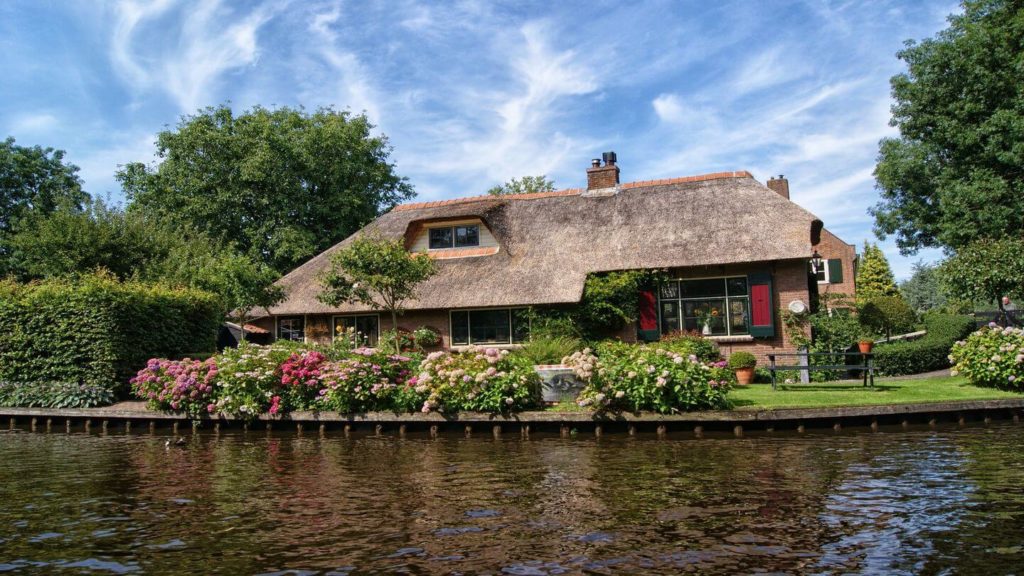 Besides the cities, the Netherlands also serves up stunning towns and villages. Take a trip into the countryside to discover some of the most charming places to visit in the Netherlands, like the car-free Giethoorn (known as the Venice of Holland) and the historic Haarlem near Amsterdam.

You can also visit the traditional fishing villages of Yerseke and Urk, the fortified town of Naarden, and other wonderful towns like Middelburg, Volendam, Goes, Zierikzee and Alkmaar. Each town is different and worth a drive to check them out. 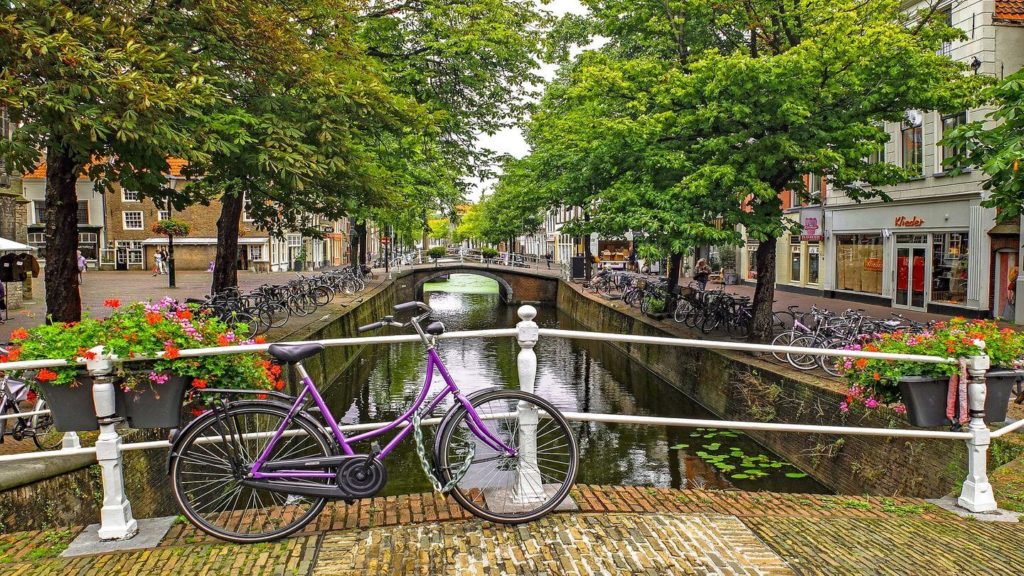 It’s easy to bike around the towns and cities because the country is so flat, plus it’s one of the cheapest and greenest ways to get around. No wonder the country consistently ranks as one of the healthiest in the world! The Netherlands was also declared the most bike-friendly country in Europe in 2013. With more than 35,000 kilometres of bicycle paths, there’s plenty of space to hop on your bike and explore the country too! 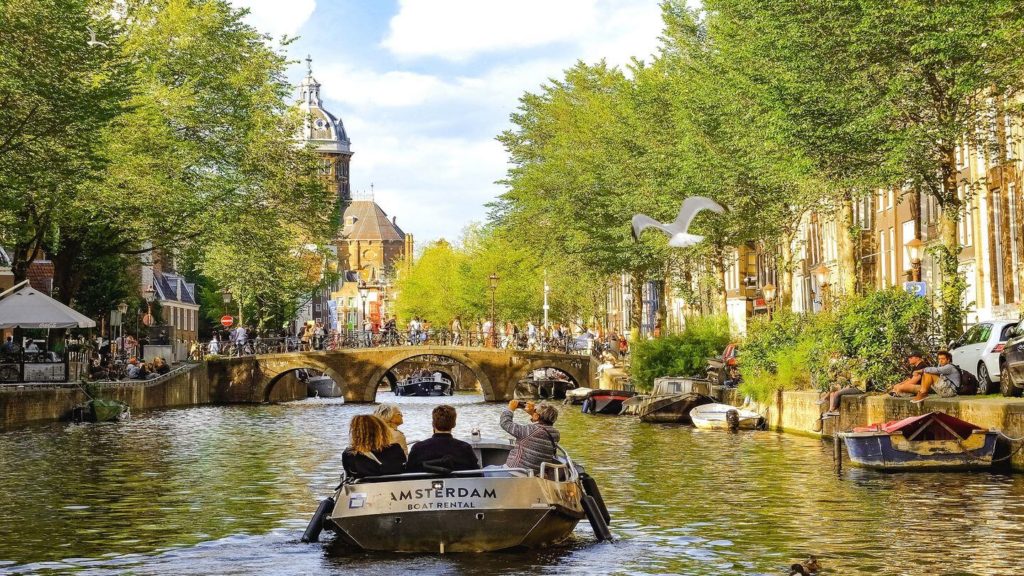 When you think of the Netherlands, you’re probably picturing the gorgeous canals. Most visitors fall in love with them and there are few experiences in the Netherlands that are more romantic than taking a boat ride down the pretty waterways.

They’re a bit different in every city, so you’ll never tire of exploring the canals. Plus there’s plenty of interesting history behind them, including Amsterdam’s famous canal belt. Your Amsterdam Travel Director will tell you all the fascinating stories behind this UNESCO-listed wonder. 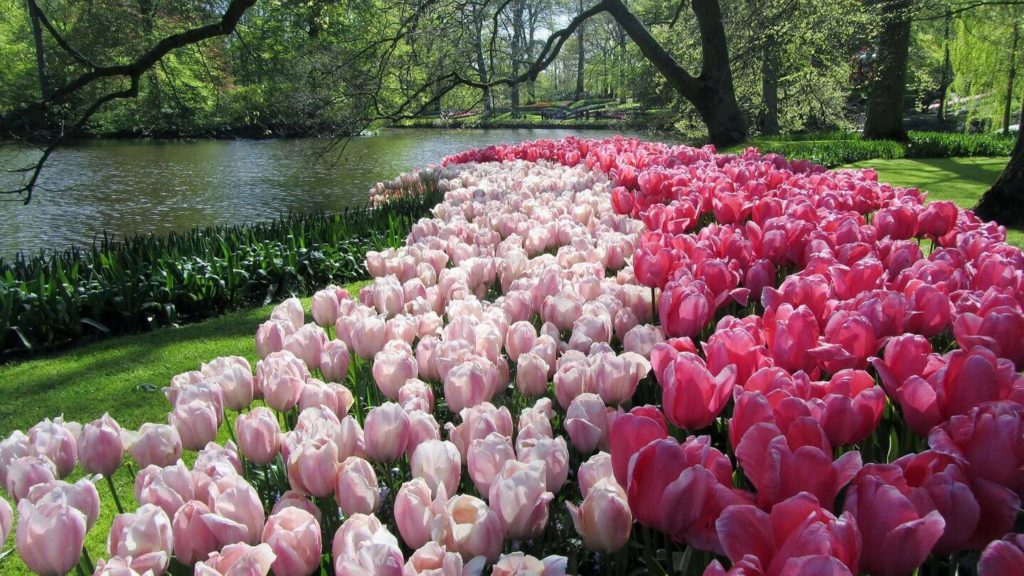 There’s a reason why the Netherlands is known as ‘the flower shop of the world’. The tulips of the Netherlands are unrivalled, with sweeping fields of glorious blooms and stunning gardens. Thousands of people flock to see the beautiful flowers each year.

One of the best places to see them is Keukenhof Park, the largest flower garden in the world. It’s known as the ‘Garden of Europe’ and has 800 varieties of tulips, with around seven million tulips planted annually. The best time to travel to the Netherlands for this amazing experience is from mid-April to mid-May. 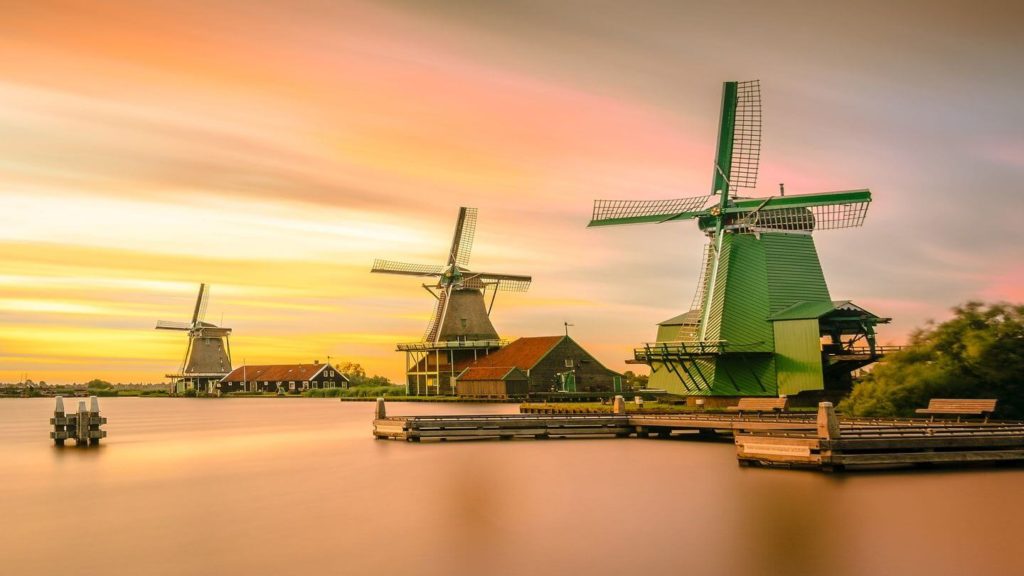 Windmills are one of the most iconic sights in the Netherlands. But did you know that there are over 1,000 windmills spread across the country? They were traditionally used for grinding grain, pumping water, and harnessing the wind, and there are still a few in commercial operation today.

The best place to see Dutch windmills is the UNESCO-listed Kinderdijk area, where you’ll find 19 charming windmills. But you’ll soon notice that windmills pop up everywhere throughout the country. 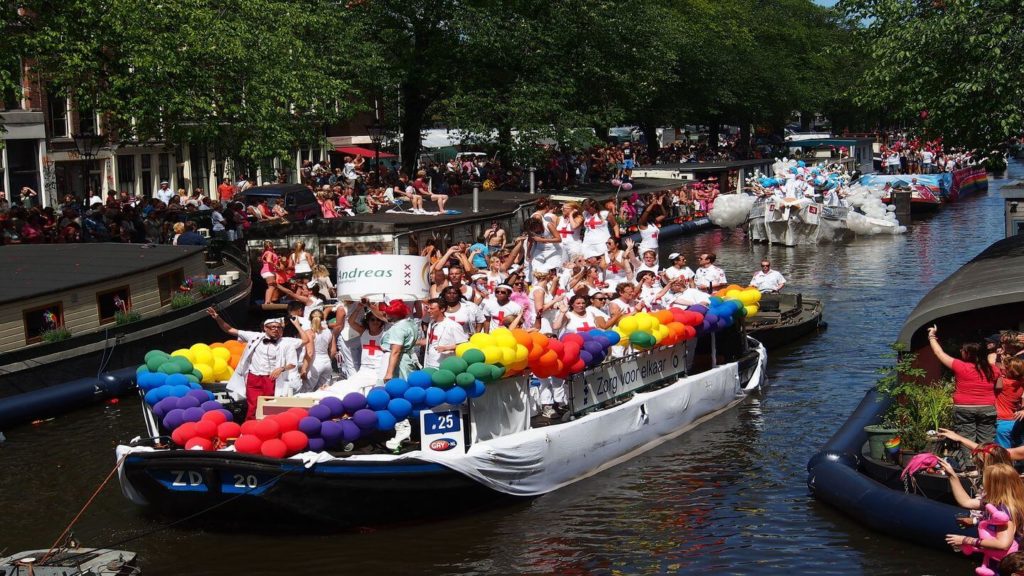 There’s also King’s Day which is celebrated every year on 27th April, to commemorate the Dutch monarch King Willem-Alexander’s birthday. Everyone gets the day off and the streets overflow with people dressed in orange, waving orange flags and blasting music.

2020 is a particularly good time to party when you travel to the Netherlands. The Eurovision song contest will be held in May in Rotterdam, one of the best places to visit in the Netherlands. Liberation Day will also be a big celebration in 2020, as the country will be commemorating 75 years since the end of WWII.

8. The masters of art 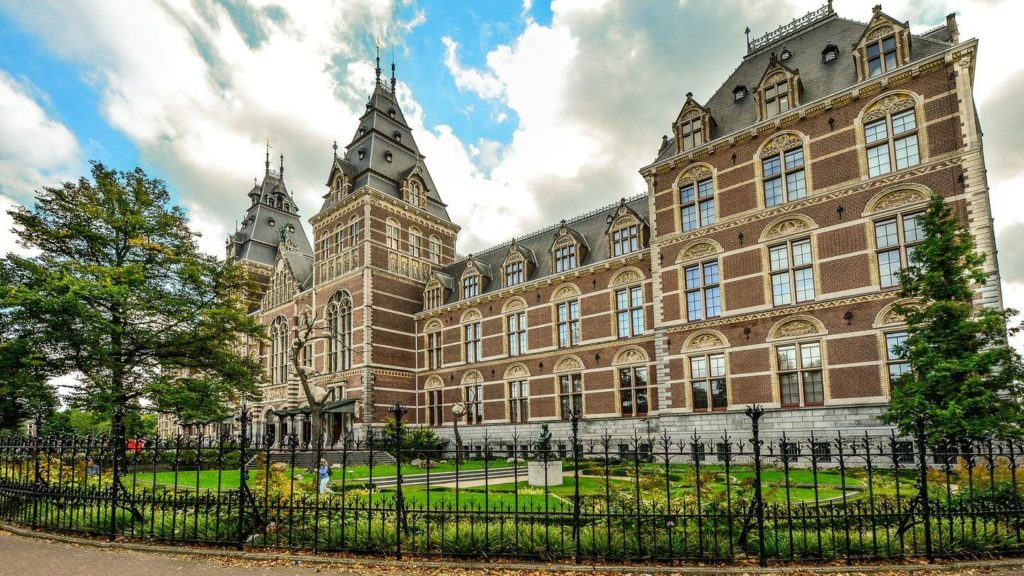 Many of the world’s most acclaimed artists have come from the Netherlands. With the likes of Vincent Van Gogh, Rembrandt van Rijn and Johannes Vermeer, you’ll always be in good company as you explore the art museums around the country.

You can admire the Dutch masters and foreign artists at top museums like the Rijksmuseum, Van Gogh Museum and Stedelijk Museum. But there are excellent museums with impressive artworks in every major city.

Quick tip: The lines are always super long at the famous Rijksmuseum. Be sure to get a skip the line ticket before you arrive.

9. It’s one of the safest countries in the world 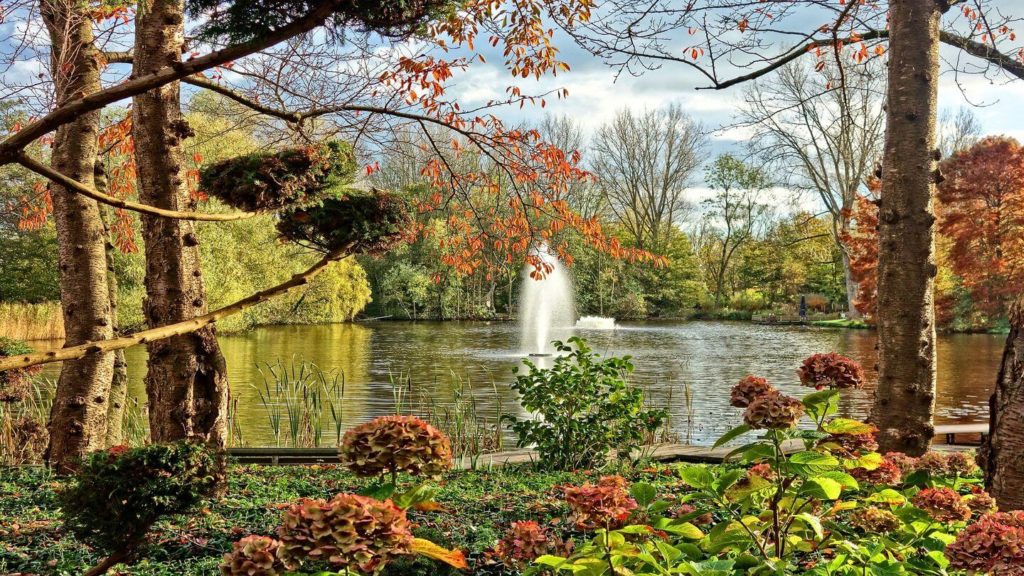 The Netherlands consistently ranks as one of the safest travel destinations in the world. The Global Peace Index, which ranks 163 independent states and territories according to their level of peacefulness, ranked the Netherlands as the 17th safest country in 2019.

The annual study by Berkshire Hathaway Travel Protection (BHTP) ranked the Netherlands as the fifth safest country to travel in 2020. With low levels of crime, great political stability, and welcoming attitudes to travellers, you can travel to the Netherlands with peace of mind. 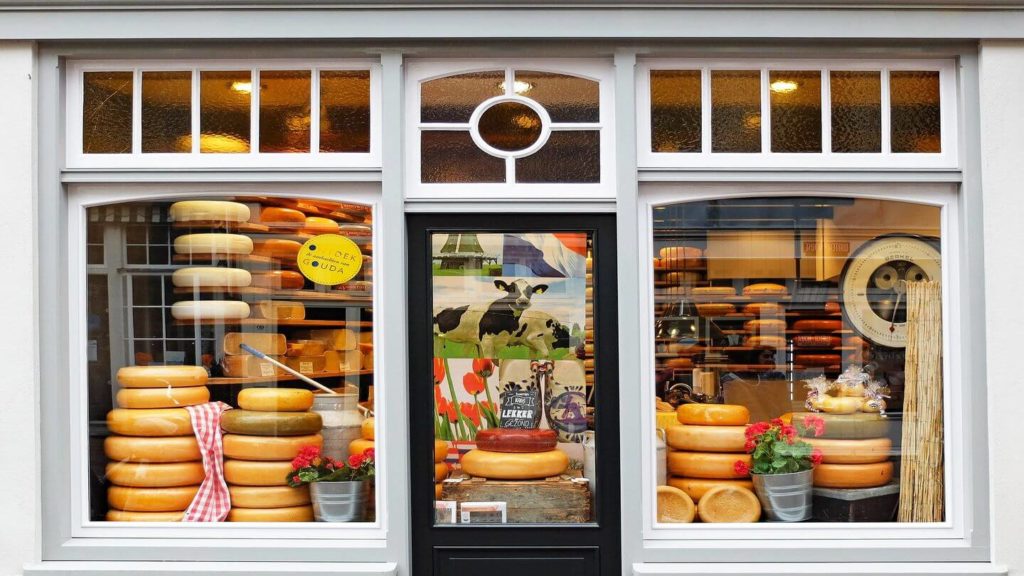 If you love cheese, you’ll adore the Netherlands. The Dutch are the original makers of Gouda and Edam, two of the most beloved creamy cheeses on Earth. But with the country producing 650 million kilos of cheese per year, there are so many more varieties to explore.

You’ll love exploring the charming cheese shops, with walls stacked high with vintage rounds of cheese. Many Dutch towns even have their own cheese markets where you can buy fresh balls of cheese straight from the farm. Yum! 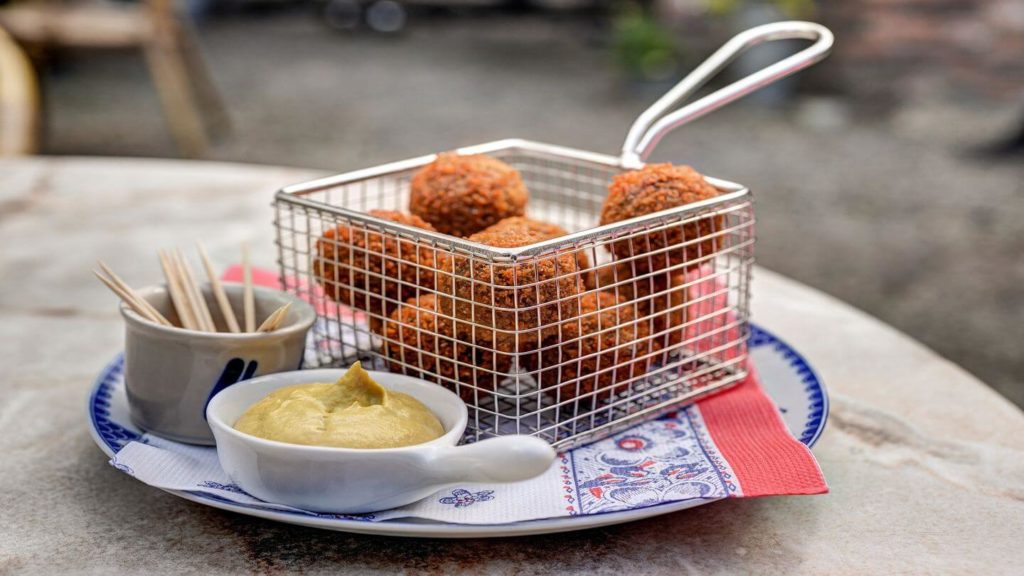 We bet you won’t be able to resist gorging on the best Dutch snacks. From cones of delicious poffertjes (mini-sized pancakes served with dripping butter and powdered sugar) to bitterballen (tasty fried balls made from meat roux and served with tangy mustard), you’ll likely need to loosen your belt after a trip to the Netherlands.

If you can tear yourself away from the poffertjes, don’t forget to try stroopwafels! These sweet waffles are made from two thin layers of baked dough with a heavenly caramel syrup in the middle. Buy them fresh from the market, or take them with you as a souvenir or a treat for later. 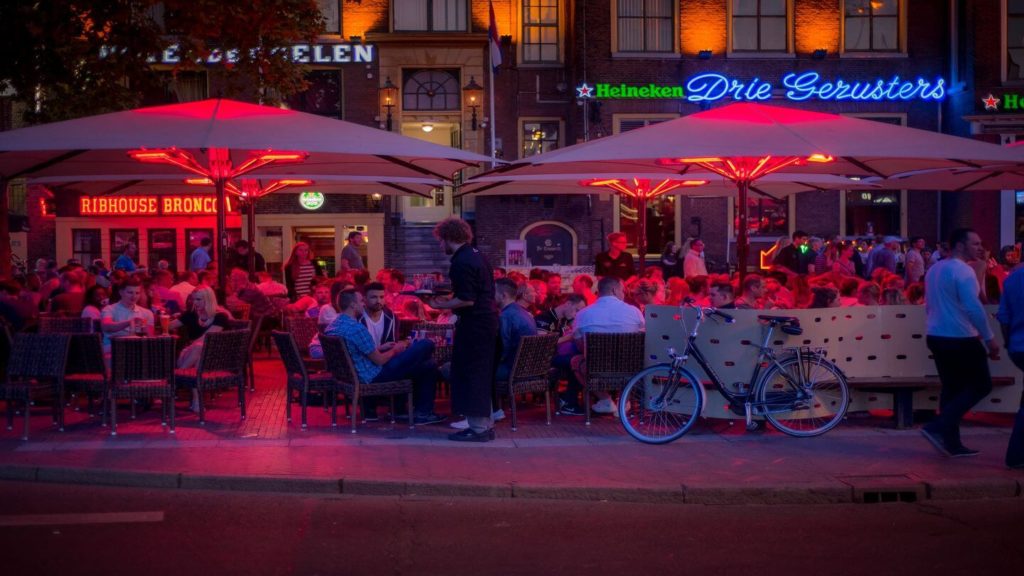 Speaking of beer, the Netherlands certainly holds its own when it comes to this frothy brew. The country has a massive beer selection, including the famous Heineken that originated in Amsterdam, and many delicious brews from neighboring Belgium.

You’ll also find a superb Dutch craft beer scene. Many local breweries still use traditional methods to produce their beer. Some of the best breweries are Kaapse Brouwers in Rotterdam, and Jopen in Haarlem. We also love Brouwerij ‘t IJ, located under the huge windmill in Amsterdam. The Netherlands even has the largest pub in all of Europe, the Drie Gezusters (Three Sisters) pub in Groningen.

The UN recently named the Netherlands the sixth happiest nation on earth, and the country regularly lists among the best places to live in the world. With all that delicious food and scenic cycling, it’s no wonder the Dutch are some of the world’s happiest people.

The Dutch are known to be friendly and straightforward, plus they’re great at speaking many languages. A recent report revealed that the Dutch are the best non-native English speakers in the world, with around 90% of Dutch people able to speak English.

So if it isn’t the canals or tulips, the Dutch people will surely steal your heart on your Holland adventure.

Where are your favourite places to visit in the Netherlands? Let us know in the comments below…

Ten Most Unique Festivals in The Netherlands