Austria’s second largest city, Graz lies on the River Mur and has long been a popular stopover for tourists. Highlights include exploring its many historical buildings, particularly in the Old Town with its numerous Baroque façades. Another big draw is the Schlossberg, a large hill that rises behind the picturesque town.

While excavations reveal the area was settled as far back as AD 800, the city was first mentioned in 1128, after which time it passed into the hands of the Habsburgs. Soon after, it rose in importance as a place of trade and commerce. Many of the surviving buildings were influenced by Italian architectural styles, including Schloss Eggenberg.

As a result of this abundance of historically significant buildings, Graz is today an important cultural center that was added to the list of UNESCO World Heritage Sites in 1999. Graz is also the birthplace of Hollywood star Arnold Schwarzenegger, and a little museum here is dedicated to his career.

To help you make the most of your Austria travel itinerary, be sure to review the best places to visit in Graz in this list of top tourist attractions in the city. 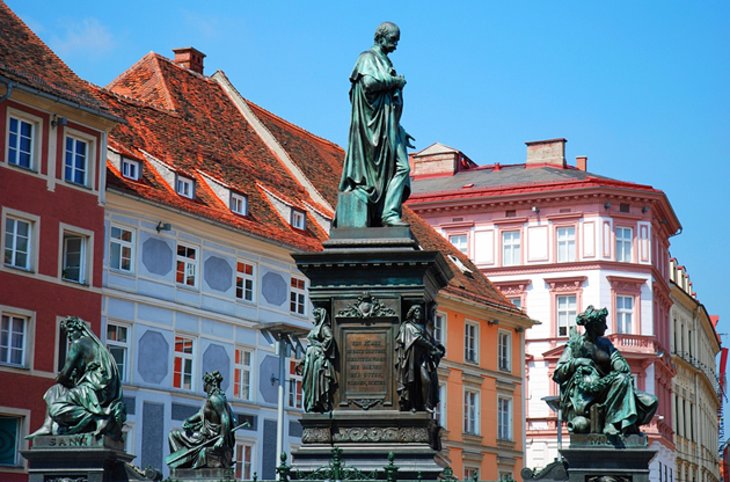 The UNESCO-designated Old Town center of Graz is filled with historical architecture, and is a pleasure to explore on foot. Highlights include the Hauptplatz, the Main Square, on the left bank of the River Mur. Here, you’ll see a fine statue of Archduke Johann (1782-1859), who did much to bring industry to the region and improve communications and trade. Also of note are the Town Hall (Rathaus), built in 1893, and the 17th-century Haus am Luegg, with its attractive arcaded and stucco-decorated facade.

To the west of the Main Square is the Gothic Franciscan Church (Franziskanerkirche), notable for its west tower from 1643 and its Late Gothic nave with a ribbed vaulted ceiling. The church’s Chapel of St. Anthony, separated from the main building by a Baroque grille from 1650, is worth seeing for its pietà from 1720.

Finally, be sure to stroll along the Herrengasse pedestrian precinct with its many handsome old mansions, including the lovely Painted House (Gemaltes Haus) with its frescos from 1742.

2. Schlossberg and the Clock Tower 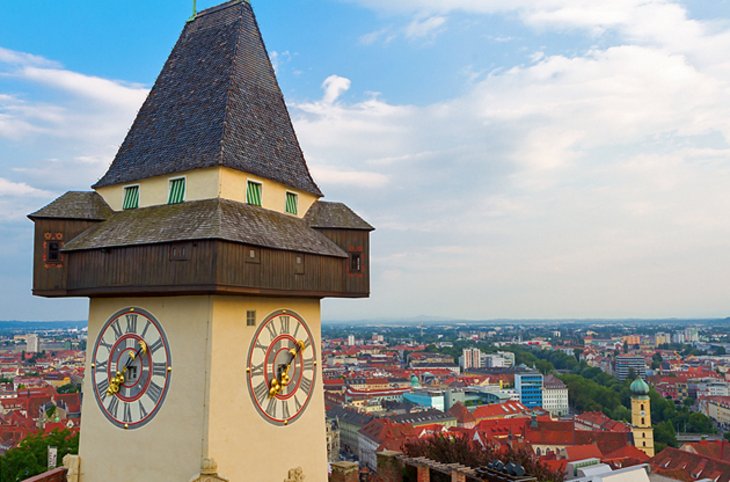 Above Old Town Graz rises the Schlossberg. This 473-meter-tall hill can be ascended by a funicular railway that takes just three minutes to get to the top. Alternatively, it can be reached by a pleasant 20-minute walk.

Highlights include the superb 28-meter-tall Clock Tower (Uhrturm), the city’s best-known landmark. Built in 1561, it’s all that’s left of the massive fortifications that once stood here and which were dismantled after the Treaty of Vienna in 1809.

Several other attractions are here as well. These include the 94-meter-deep Turkish Well (Türkenbrunnen) and the 35-meter-tall Belfry (Glockenturm) from 1588 with its eight-ton bell affectionately known as Liesl.

The café offers superb views over Graz, and there’s an open-air theater. Traveling with kids? They’ll love the miniature railroad. 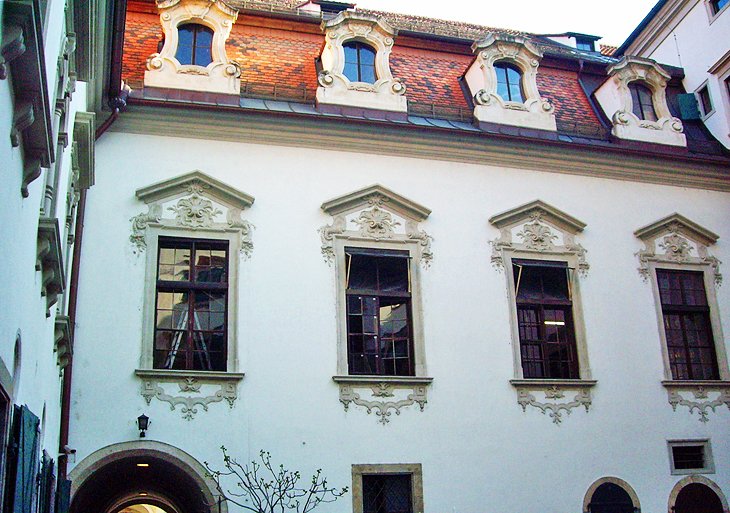 Located on Graz’s Herrengasse, the Styrian Armoury (Landeszeughaus) is, like many of the town’s other top attractions, a part of the Universalmuseum Joanneum collection of museums. This important historic site has, in fact, been home to the provincial arsenal since 1644.

Known to be the worlds’ biggest historical armory, its permanent collections include 13,400 small arms and accessories, of which 4,259 are pistols. The artillery collection contains volley guns, mortars, cannons, falconets, and their accessories, and there are more than 2,000 edged weapons – swords, broadswords, and sabers.

Most impressive is the display of armor, showing how soldiers of all ranks protected themselves from the weapons of their time. These range from shields, armored sleeves, and chain mail to full suits of armor. Among the 3,844 items is a horse armour made around 1510 in Innsbruck.

The collections are dramatically displayed in traditional armory style, without signs or placards that would ruin the historic appearance of the setting. Pick up a free visitor’s guide in English at the entrance or rent the inexpensive audio guide for descriptions and background on the exhibits.

4. The Landhaus and Courtyard 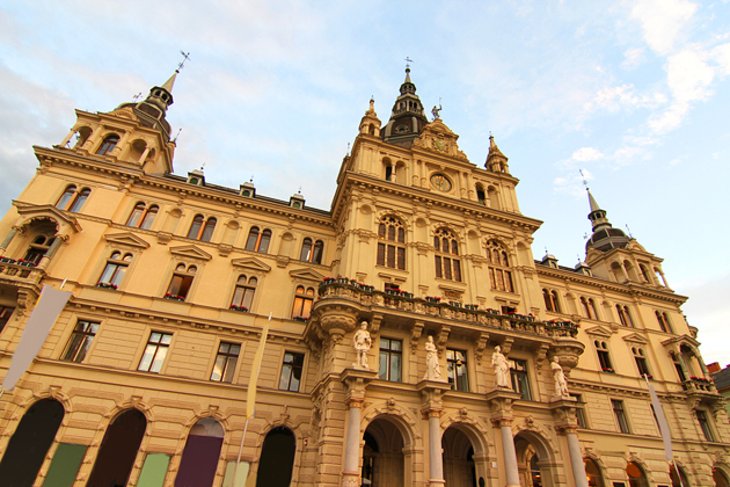 In the heart of Graz’s pedestrian-friendly Old Town stands the majestic Landhaus, home to the Styrian provincial government. Built in Renaissance style in 1565, it’s widely regarded as one of the finest such buildings in Austria.

Passing through the splendid main façade, dominated by rounded windows and a loggia, you’ll end up in the superb arcaded courtyard with its three-storied pergolas on two sides. There’s also a beautiful Renaissance fountain.

If possible, try to time your visit to coincide with one of the regular outdoor concerts or theatrical performances held here. Interior highlights include the sumptuous Knights’ Hall with its exquisite stucco ceiling from 1746.

Another government building to visit is Graz Burg. This old palace is famous for its 15th-century double spiral staircases (the Staircase of Reconciliation), which meet on each floor, creating a bizarre optical illusion. 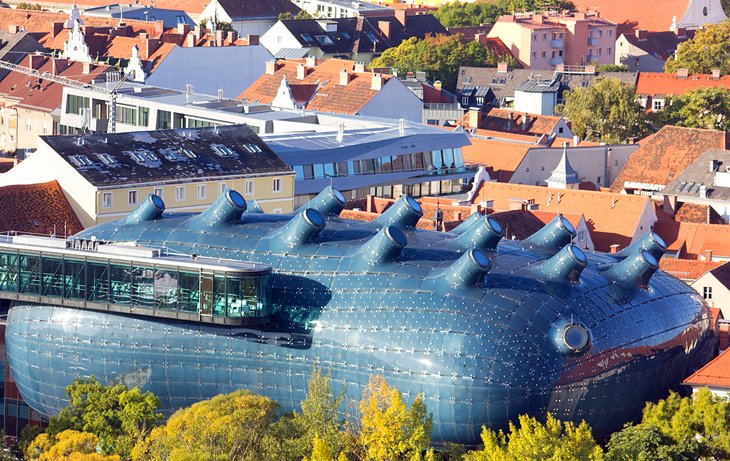 Looking a little like some alien life form plunked in the middle of Graz’s splendid old architecture, the ultra-modern Graz Art Museum (Kunsthaus Graz) was built in 2003 to mark the city’s choice as the European City of Culture. Focusing on works of contemporary art of the mid-20th century, the gallery hosts artists from around the world with regularly changing temporary exhibits. 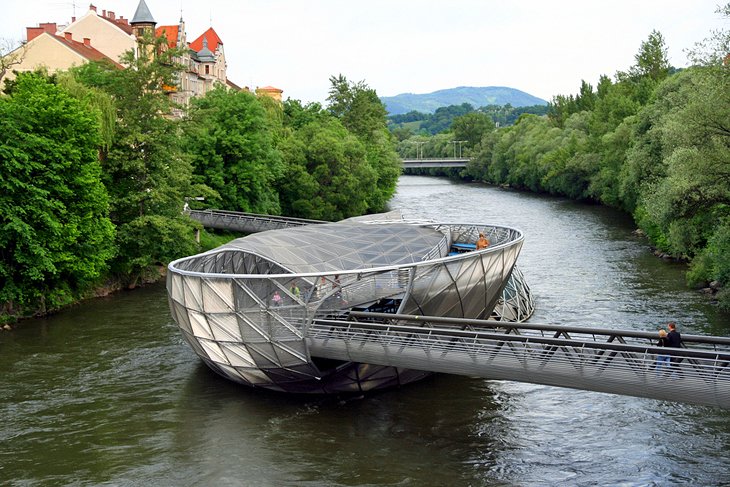 Another Graz landmark built to commemorate the city being granted the role of European Capital of Culture in 2003 is a man-made island known as the Murinsel, or Mur Island. Made entirely of steel and resembling a large upside-down seashell, it’s really a 47-meter-long floating island in the middle of the River Mur that’s tethered to its banks by two footbridges.

The middle section consists of a unique amphitheater used for concerts and other events. There’s also a café here, as well as a children’s playground with a rope maze and slide. 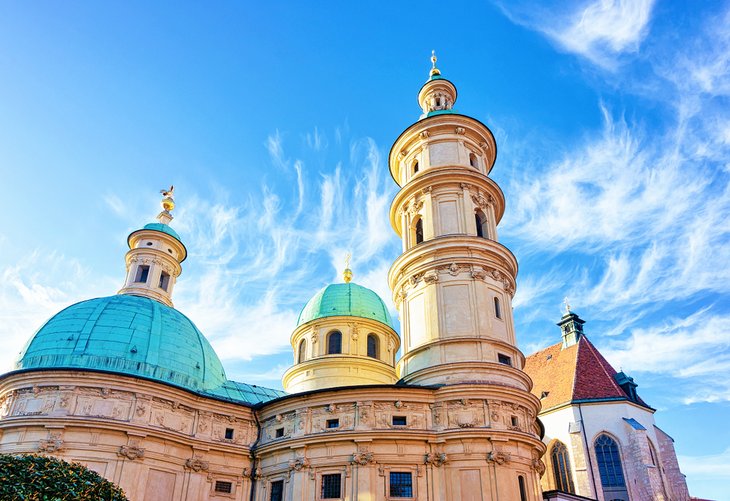 One of the top things to do in Graz for free, Graz’s Late Gothic St. Gile’s Cathedral (Grazer Dom) is a must-visit. It was built between 1438-62 on the site of an earlier church dedicated to St. Giles and which was first referred to in 1174.

Of particular note is the main doorway, which is decorated with the coat of arms of its builder, Emperor Frederick III.

On the south external wall, facing onto a small square, are the remains of a Late Gothic fresco. Dating from 1485, it’s called the Landplagenbild and depicts Graz threatened by pestilence, the Turks, and a plague of locusts.

The mainly Baroque interior is equally impressive, its wide nave separated from the choir by a narrow triumphal arch flanked by two fine reliquaries from 1477. The choir, dominated by a high altar, is notable for its altarpiece portraying the Miracle of St. Giles, while in the aisles are many fine monuments and altars. 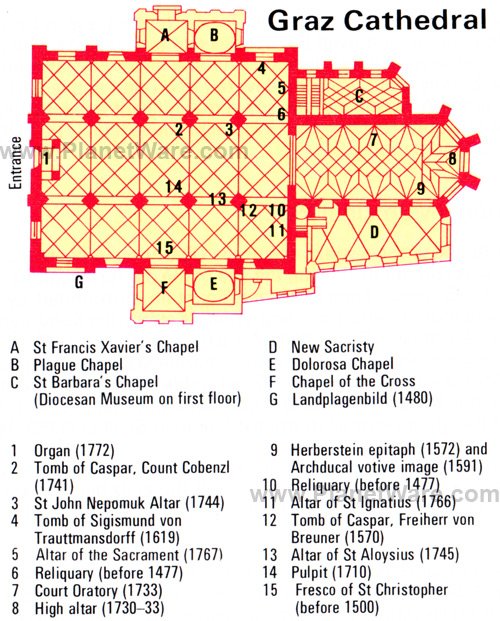 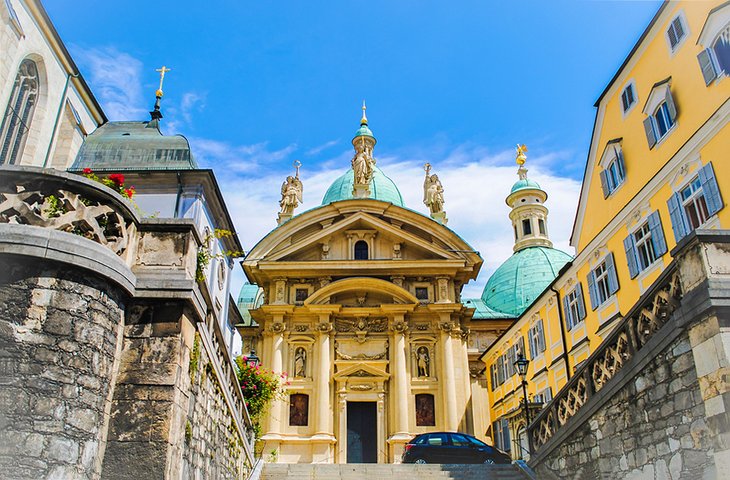 After visiting the cathedral, be sure to also visit the adjoining mausoleum. Built in the early 1600s next to the cathedral and St. Catherine’s Church (Katharinenkirche) for Emperor Ferdinand II, it’s also where you’ll find the Tomb Chapel with exquisite artwork and sculptures.

It’s known among locals as “the crown of the town” for its elevation and spectacular views. The steps leading up to the mausoleum make for the perfect selfie-spot. 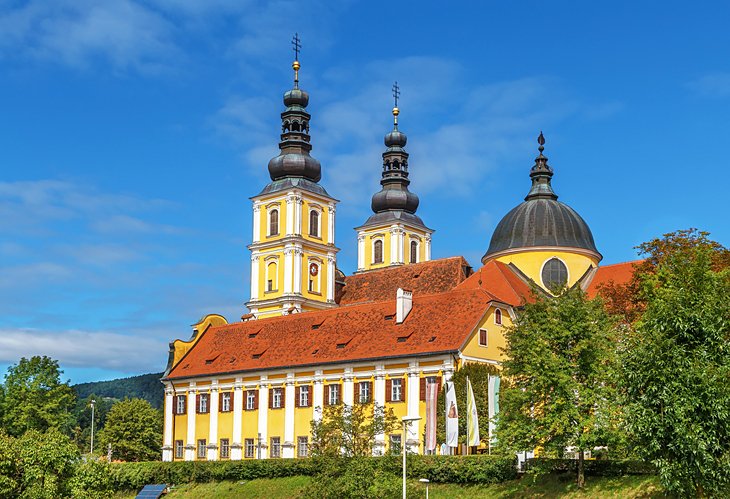 The Baroque Mariatrost Basilica sits at the top of a hill, ascended by more than 200 steps that pilgrims climb, reading the messages as they go. The interior of this popular pilgrimage church is Baroque, although the Madonna on the high altar is late Gothic in origin.

Highlights are the 1779 pulpit by Veit Königer, the inlaid side altars, and the frescoes. There are sweeping views from the basilica, and it’s a favorite place to watch the sunset. To reach it from central Graz, take Tram 1, marked Mariatrost, to the final stop. 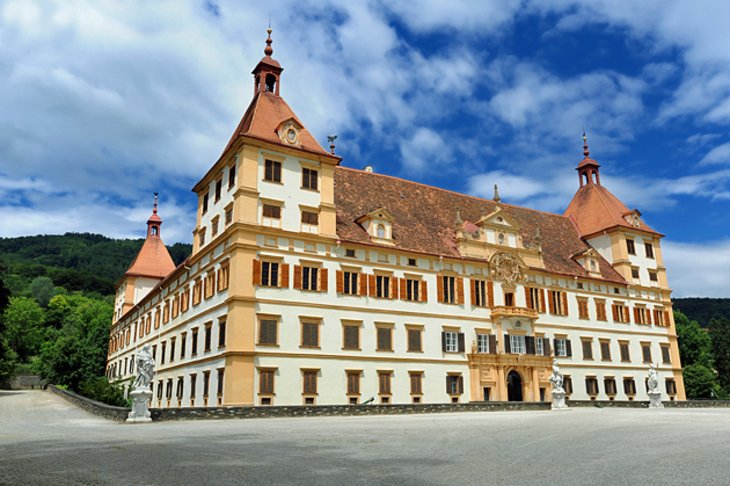 Interior highlights include the walls and ceilings of the banqueting hall, a masterpiece of Baroque architecture richly painted with more than 600 superb works, including the signs of the zodiac and the planetary system.

This theme is continued in the Reception Room, known as the Room of the Planets, part of a suite of 24 staterooms decorated by Styrian artist Hans Adam Weissenkircher.

Also of note is the Alte Galerie, a collection of magnificent artwork, including the famous Admont Madonna from 1320, the Lambrecht votive tablets from 1440, and numerous Baroque sculptures and paintings. English language guided tours are available. 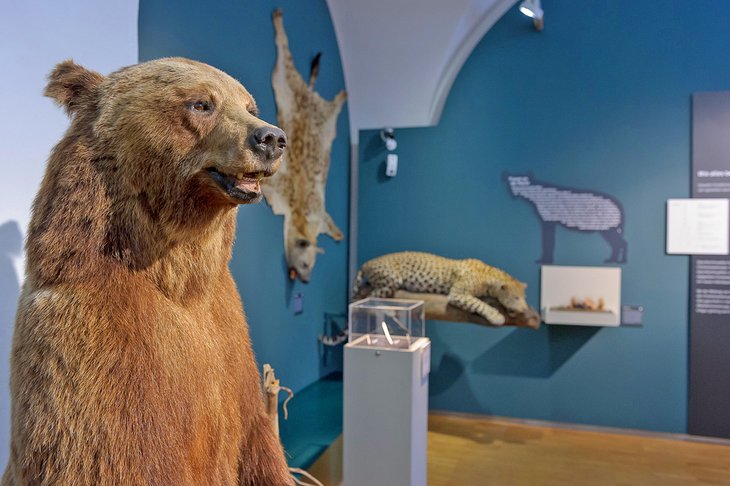 Endowed by Archduke Johann in 1811, the Natural History Museum – also a part of the larger Universalmuseum Joanneum group of city-owned cultural institutions – is one of the most important museums in Graz. Spread over several floors, its large collections include many artifacts, specimens, and displays relating to geology, zoology, and botany.

You’ll also learn about the history of the region since the time of the earth’s formation thanks to its fascinating displays of fossils and exhibits on Ice Age creatures and ancient volcanoes.

12. The Municipal Park and Botanical Gardens 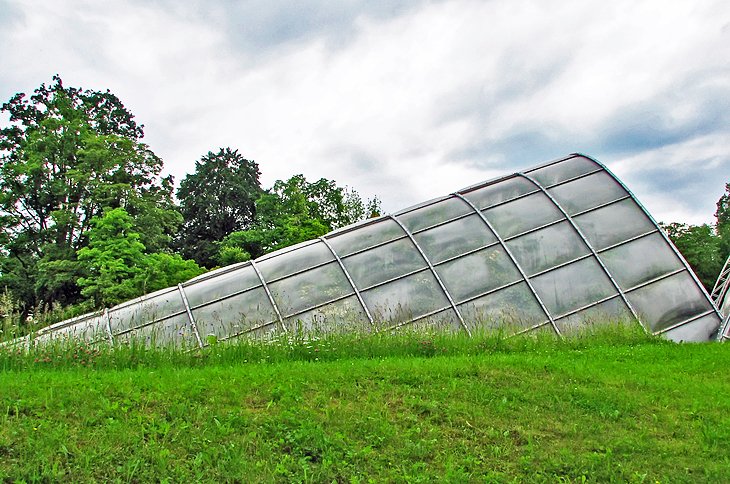 Graz Stadtpark, at the eastern end of the Opernring with its modern Opera House, was laid out in 1869 on the site of the city’s old fortifications. A highlight of this large municipal park is the Emperor Francis Joseph Fountain surrounded by numerous figures and monuments, including many famous Austrian writers, scientists, and politicians.

The city’s other important park is its botanical gardens, tucked away in the city’s poshest residential area. Noted for its ultra-modern greenhouse with exotic flora from around the world, the garden’s displays are broken down into four main climatic zones: tropical, Mediterranean, temperate, and alpine. Each of these are accessible over a series of fun wooden gangways and bridges.

15 Best Things to Do in Lienz, Austria