Austria may be a landlocked nation, but it does have several stunning bodies of water. There are many lakes in Austria, and they are popular both with travelers and local residents. Whether you want to soak in some waterfront views or make a splash under the shadow of the Alps, Austrian lakes fit the bill. If you’re fortunate enough to head to Austria sometime soon, plan to visit at least one of these incredible lakes in the country. 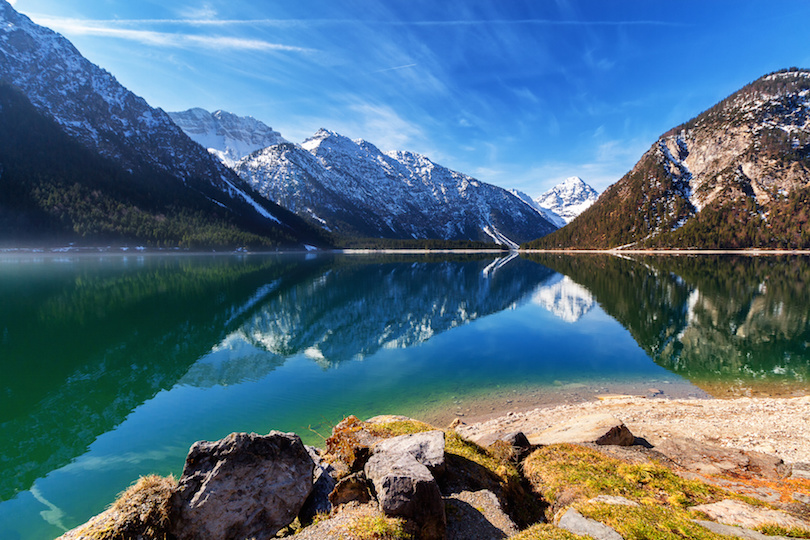 Lake Plansee, found in the Tyrol region of Austria, is a large body of water connected to another lake, called the Heiterwang, via a canal. That makes the Plansee a popular spot for boating, since the lakes are both accessible via several rivers. The lake is an unparalleled spot for outdoor enthusiasts, and miles of paved pathways are ideal for jogging, cycling and inline skating. Surrounded by the Lechtal Alps, you can also scuba dive or go fishing for trout and perch. There are also passenger ferries available that cross the lake. 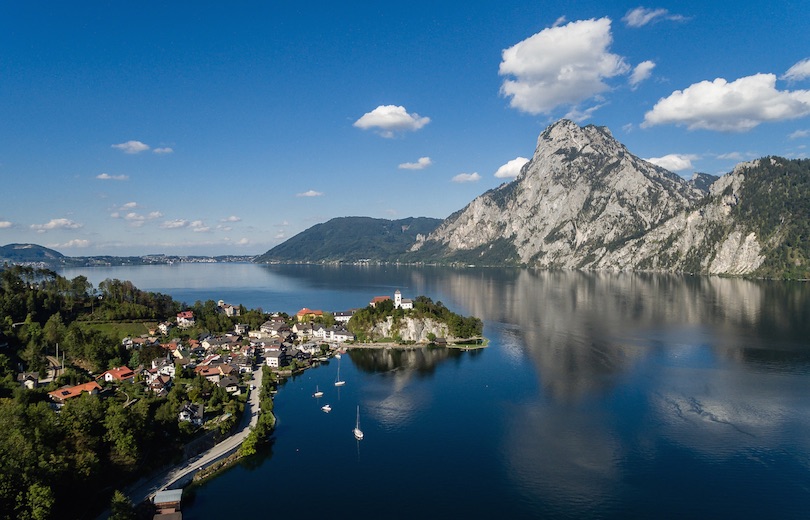 Another of the lakes in the Salzkammergut region is the Traunsee. This expansive lake is popular for outdoor activity, but it is best known for having its own underwater mythical creature called the Lungy, which may be comparable to the stories of the Loch Ness Monster in Scotland. There are also countless attractions on the shores of the Traunsee that include villages like Altmünster and Traunkirchen as well as Schloss Ort, an amazing medieval castle. 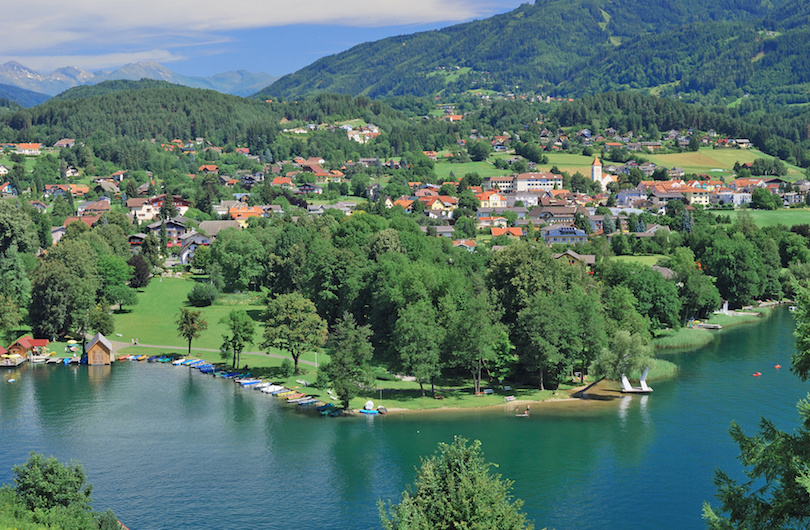 In the Carinthia region of Austria is the Millstatter See, whose steep shoreline makes it look just like a fjord. Helping to create the incredible terrain are the Nock Mountains and the Drava Valley, and the Hochgosch area to the south is wooded, creating even more lush greenery and visual interest. The mountains protect the lake from cold winter winds, which means that the water temperature is suitable for swimming during the summer. Don’t miss the village of Millstatt next to the lake, which is home to an amazingly preserved 11th century abbey. 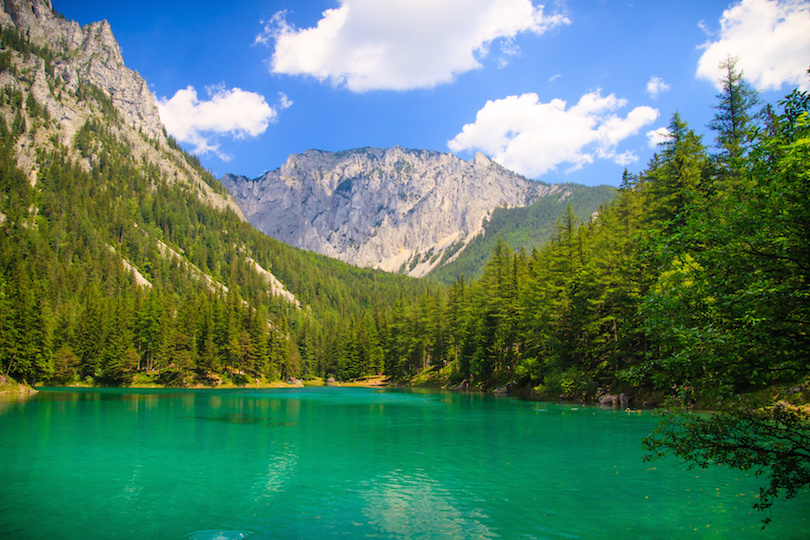 Just outside of a village called Tragöß is the Gruner See, which translates literally to the Green Lake. The name is no mistake, and the waters of the lake are a vibrant green color with incredible visibility. The water is comprised of melted snow from the Karst Mountains, so even in the summers the temperature is very cold. However, the Gruner See is a remarkable sight, and it is even possible to go scuba diving in the lake with a local guide and a wet suit. 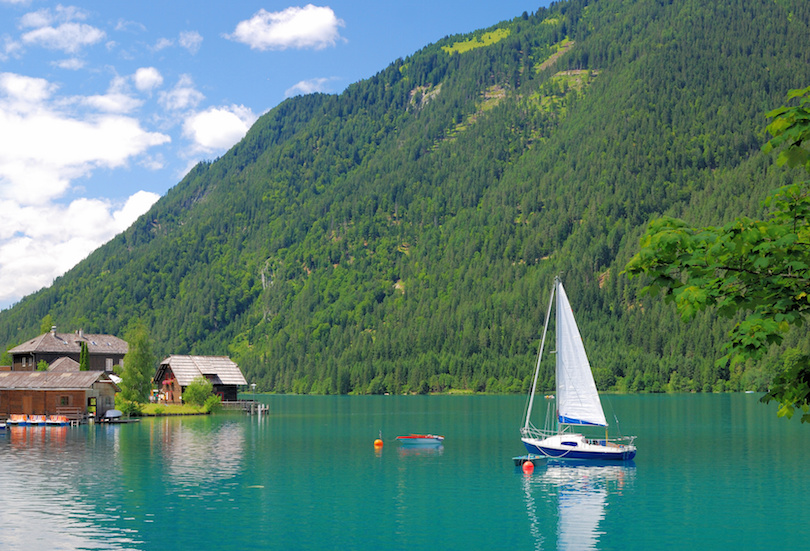 In the Gailtal Alps is the Weissensee, or White Lake. This glacial lake is an incredibly popular destination for all types of activities, and a ban on private motor boats means it retains its peaceful atmosphere and abundance of wildlife. In the summer, visitors can ride on passenger boats across the lake, canoe on its surface, fish for trout and perch and hike around the shores. In the winters, a spot next to the Weissensee becomes a prime skiing area, and there are even speed-skating competitions on parts of the lake. 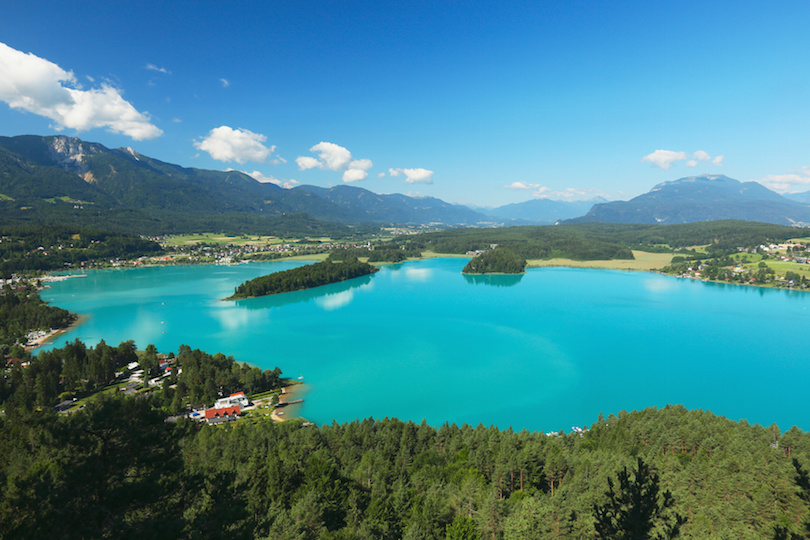 The Faaker See is considered to be the lake in Austria with the cleanest, most drinkable water. As you might imagine, that means the water quality is incredible, and there is plenty of visibility throughout the lake. There are several beaches on the Faaker See where you can pay a small fee to relax, swim and soak up the sun. The lake is also a hub for events, including the annual European Bike Week, which is the largest rally of motorcycles on the continent. Fishing is also a popular pastime, and ice skating is a thrill when the lake freezes during the winter. 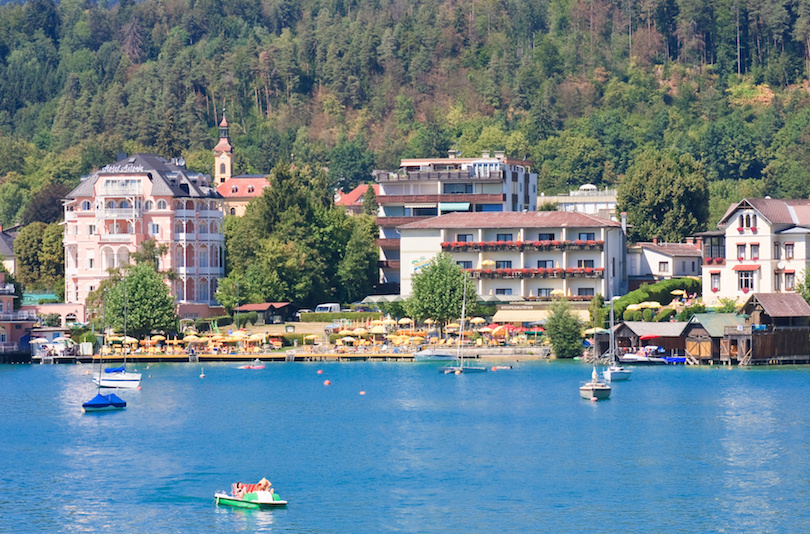 To find this stunning lake, head to the region of Carinthia in Austria. As early as the 19th century, the Austrian aristocracy have been spending their summers on the Wörthersee, which definitely encouraged Austrians and visitors alike to relax on the lake’s shores. The Wörthersee boasts some of the warmest waters in the country, which makes the lake the perfect swimming spot in summer. You can rent a bicycle from the small city of Pörtschach to tour the region, and there are also seasonal summer ferries that take passengers across the lake to various destinations. 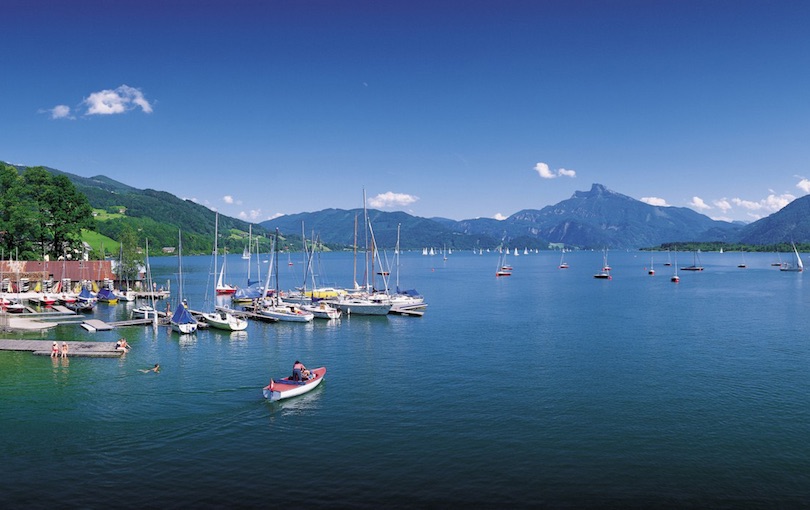 Mondsee is one of the largest privately owned lakes in Austria, and it is a stunning retreat that lets visitors escape the hustle and bustle of everyday life. Mentioned in a James Bond novel, Mondsee is the epitome of scenic. From vantage points around the shore, you can see the Northern Limestone Alps and the Northern Sandstone Alps. From the town of Mondsee on the shores of the lake with the same name, you can also get a full view of the mountain known as Drachenwand, or Dragon Wall. 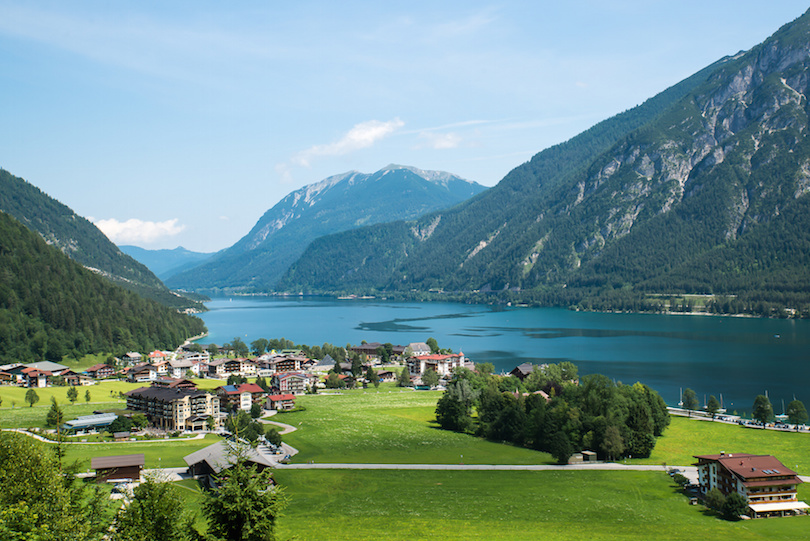 The largest lake in the Austrian district of Tyrol is Achensee, which also goes by the nickname Fjord of the Alps. The lake itself is stunning, thanks in part to the location right at the base of a mountain. However, it is the color and clarity of the water that makes it such an unusual and unforgettable destination. The Achensee can look green or aquamarine, and in parts you can see up to 10 meter (30 feet) down. Top ways to enjoy the scenery include sailing and windsurfing on the lake, which is popular thanks to windy conditions, as well as hiking nearby at the Bärenkopf Mountain for panoramic views of the lake. 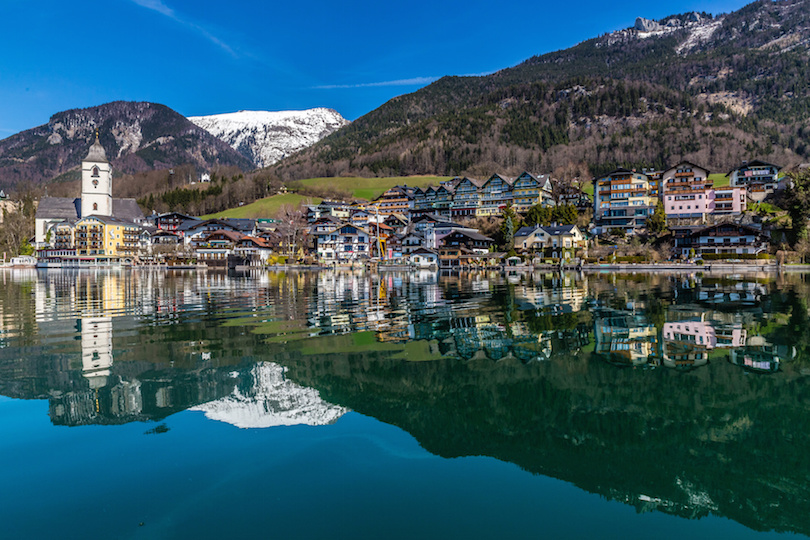 The Salzkammergut is a resort region near Salzburg where people from around the world flock for the lush green landscape and the abundance of spectacular lakes. One of the best is known as the Wolfgangsee. The lake is named for the 10th century Saint Wolfgang, who allegedly built a church near the lake’s shores more than 1,000 years ago. For the best views over the lake, ride the railway called the Schafbergbahn to the peak of the Schafberg itself, which gives you incredible perspective over the waters of the Wolfgangsee. 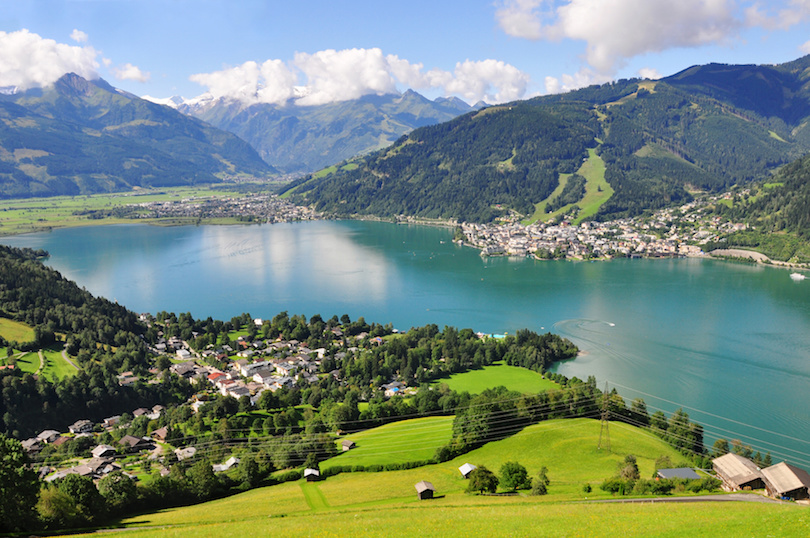 In the Austrian Alps is the Zellersee, or Lake Zell, which is a relatively small but beautiful freshwater lake. Because of its size, Zellersee freezes in the winter, making it perfect for year-round fun. During the summer, you can swim, fish or kayak in the clear water of the lake. In the winter, expect crowds of locals skating across the frozen surface of the Zellersee. The lake is named after the nearby town Zell am See, which is home to a stunning 16th century castle as well as an impressive church built in the Romanesque style. 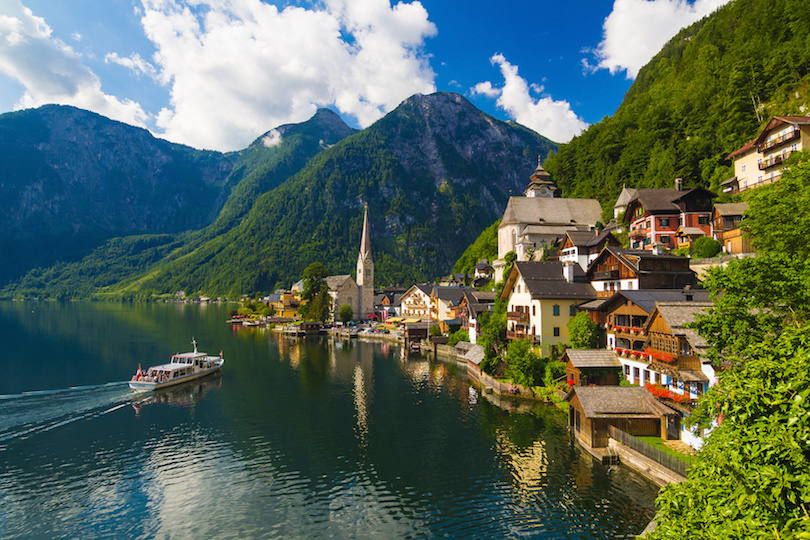