Who Says There Aren’t Interesting Things to Do in Eindhoven?!

It’s come to our attention that people wonder if Eindhoven is a good place to visit. So, we went to check it out! To out surprise, this smaller Dutch city (actually the 5th largest) is full of free and unusual things to do! There are a ton of museums in Eindhoven given that the city has a rich history that dates back centuries.

If you didn’t know, Eindhoven was badly destroyed during World War II. When it was rebuilt, the city adopted an industrial design and has since become a hub for design and innovation. As a result, the city uses and reuses its modern space very uniquely.

There are lots of great cafes and food places – and you’ll also find quite the area to go out at night! So, if you are wondering if Eindhoven has a good nightlife – you’ll have to find out for yourself! We explored during the day but we got to check out many things to do in Eindhoven – so here we go!

Things to Consider When Visiting Eindhoven

If you are heading to the Netherlands and considering a visit to Eindhoven, here are a few tips/pointers to help you plan your trip. This is especially helpful for those who are unfamiliar with the country and the city of Eindhoven.

How to Get to Eindhoven? 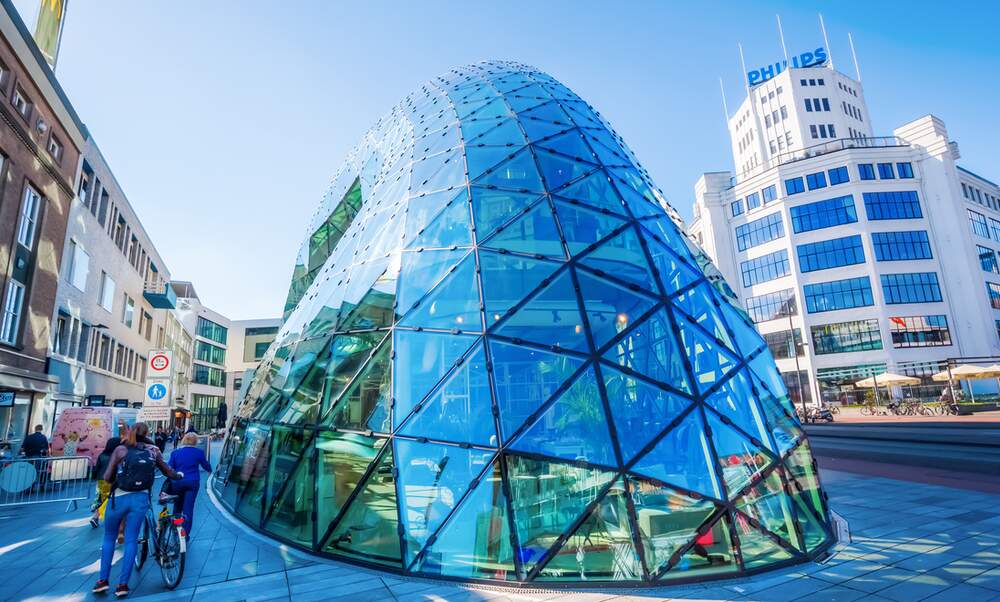 Eindhoven is located in the geographic bottom/middle of the Netherlands. For a traveller measuring distances, Eindhoven is about a 1.5-hour drive south of Amsterdam, the same distance southeast of Rotterdam, an hour north of Maastricht, and about 1.5 hours across the border from Brussels in Belgium. Eric explored this region in 2015 on a classic Europe Trip so he knows how close these places really are.

Getting Around in Eindhoven

As with most Dutch cities/towns, the cycling infrastructure is absolutely impeccable. That means that if you rented a bike you would have a super easy time navigating the city safely and efficiently.

Beside biking around Eindhoven, the city is very walkable and not overly large so you could definitely count on your two feet to get you around. If walking isn’t really your style, there is also an extensive bus system around Eindhoven – with a large bus station right at the central train station. The official website is in Dutch, so here is the 9292 page for the Eindhoven Bus Station.

Where to Stay in Eindhoven

Even though the city is smaller in size, there are still quite a few places to stay if you want to explore the city for a few days. Many of the hotels are situated in the city centre so you will have no problem booking something within walking distances to many attractions, museums, etc.

If you are passing through on a backpacking trip (or just want to keep things cheap) there are very few hostels in Eindhoven. That said they are high-rated on Hostelworld.

Things To Do In Eindhoven, The Netherlands

To help you plan your trip to Eindhoven, here are a bunch of the top attractions, sights, eats, and drinks. We had a great time wandering around the city and definitely need a second full day to take in everything on this list.

Eindhoven, if you didn’t know, has a massively long street of just bars, pubs, and clubs. It’s called Stratumseind – and it’s actually the longest “nightlife” street in the whole of the Netherlands! Take that, Amsterdam. We wandered through Eindhoven in the daytime so we obviously didn’t get to experience Eindhoven nightlife but we really want to head back so that we can give it a go at least once. 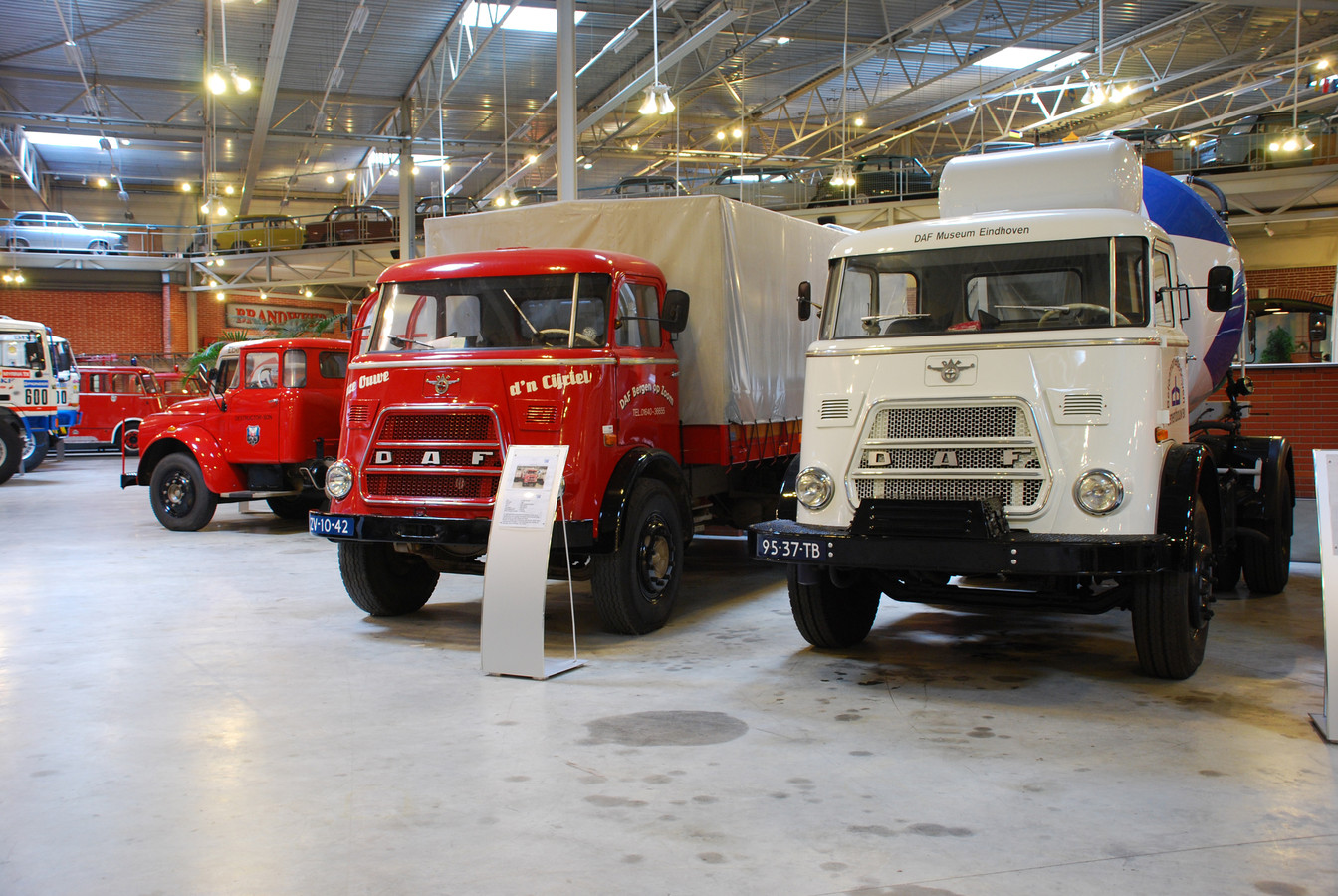 DAF – or once officially “Van Doorne’s Aanhangwagenfabriek N.V.” is the famous Dutch truck and manufacturing company founded in 1928. You’ll see DAF trucks on the road if you drive around Europe on the highways! Their headquarters are in Eindhoven, and you can visit them in the DAF Museum.

Here, you’ll learn about the history of the company, the brand, and get to check out truck models, cars, and prototypes that never hit the road. Pretty cool if you are into understanding how a fast-growing truck company has influenced the industry for decades. You can learn about admission prices and opening hours if you visit the DAF Museum website.

Dedicated to St. Catherine of Alexandria, this beautiful cathedral was built in 1867. The Neo-Gothic design has changed with renovations over the years (mainly due to damage from World War II bombing).

These days, the church is known for its beautiful stained glass windows which were put in during restorations. It has been a national monument since 1972 and has one of the largest Dutch pipe organs in the country.

The church has merged with local music performance groups. As such, there are weekly concerts which you can attend. Check out the website for more information and the performance schedule. 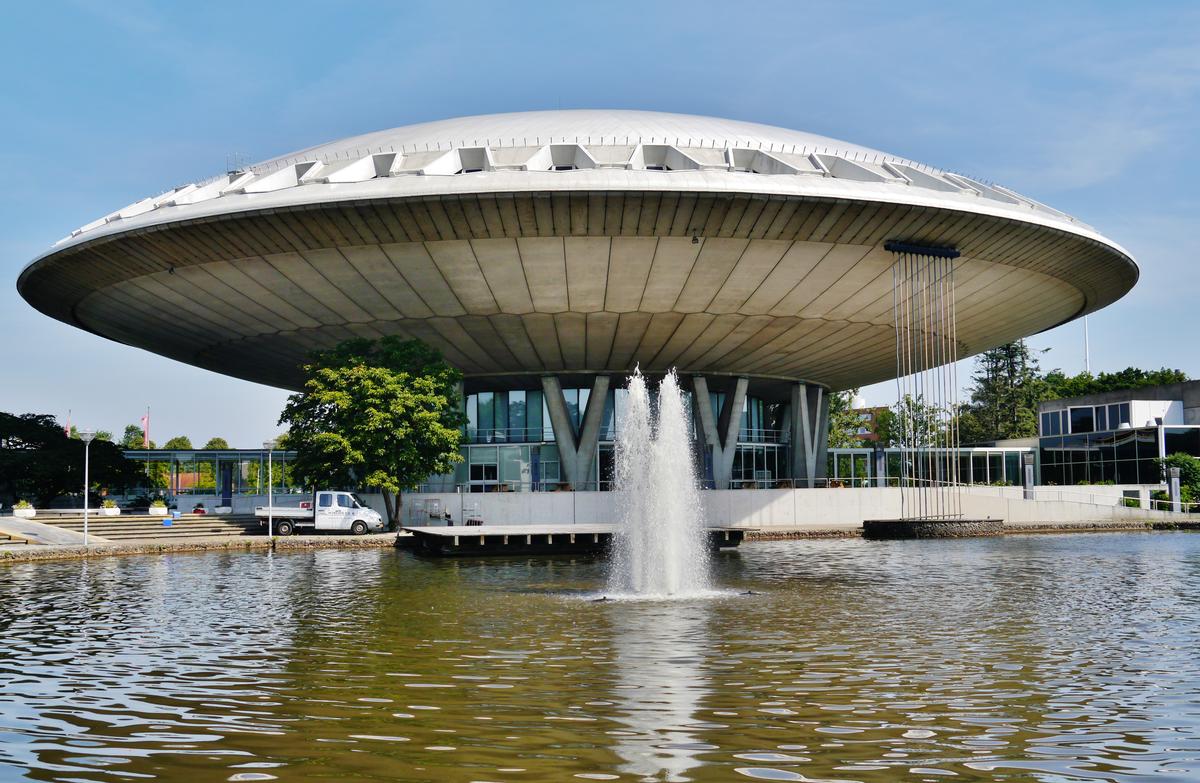 Eindhoven has a spaceship – or more specifically a “flying saucer” that you should definitely see. Let’s be serious – this is just a very cool building. The futuristically designed building was completed in 1966 by Philips – and you’ll learn more about the company as we go.

These days, it’s a conference centre that gets used quite frequently. It was also the location of a former science museum. In any case, the building has come to represent the technology and innovation happening in the city – so go and check it out. It’s just a quick walk from the Strijp-S Area (which we mention below). 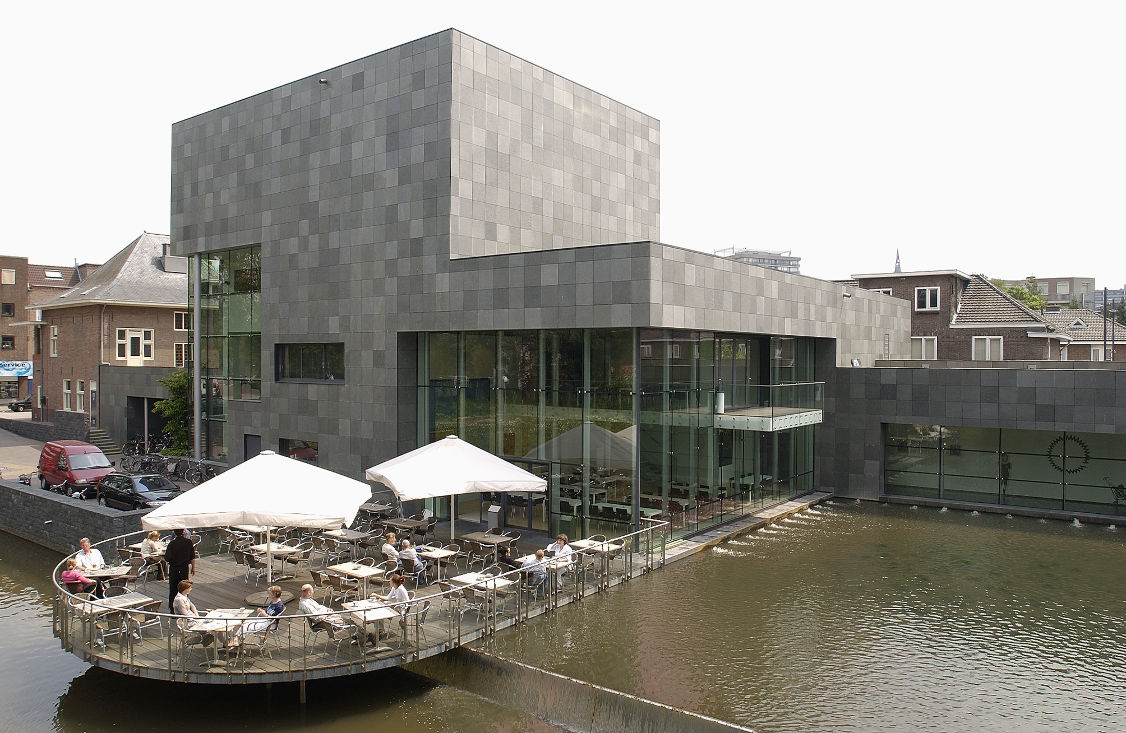 Opened in 1936, this unusually designed building is one of the best museums of modern and contemporary art in Europe. There are over 2700 pieces of art – ranging from paintings to sculptures and created famous artists like Picasso, Mondrain, and Kandinsky.

The Van Abbe is very easy to get to. We had a wander around the entire building but didn’t go in due to time constraints. It’s just south of the train station about a 10-minute walk through shops/bars and located beside the Dommel Rover in the Stratumseind District. If you want to learn about opening hours and admission prices, you can visit the Van Abbemuseum website.

Stadswandelpark has tons of green space and also has a statue garden, well-trimmed lawns, and walking trails. There is even an Observatorium, a few nice ponds, and a pavilion with a restaurant! This public park is also close to Genneper Park which we’ll mention further down.

Genneper Park is over 200 acres of green space. This makes it a great place for walks with lots of ponds, bridges and old architecture – you’ll be sure to get some great photos here. Close by, other areas of the park include a sports complex, swimming pool, skating track, and golf and country club so there is a definitely a sports side to the park space as well! 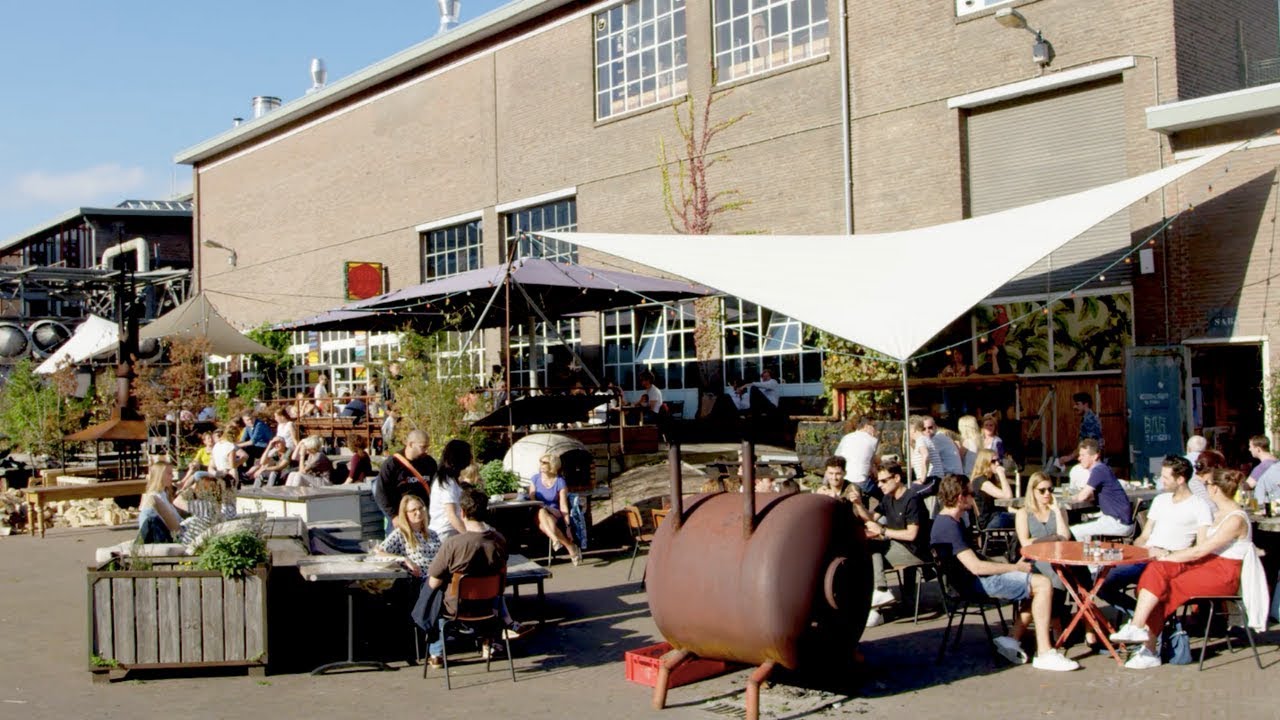 This post-industrial area of old factories and buildings has been converted into shops, restaurants, workspaces, innovation labs, and a network or apartment buildings. As a result, the area is a thriving centre outside the city centre of Eindhoven.

We originally headed to the area for the famous market hall (Veem Market – see right below). But it is here that we stumbled upon most of the venues for Dutch Design Week and had an absolute blast exploring the vintage shops and other things the area has to offer!

Try Food At The Veem Market

One of the reasons we headed over to the Strijp-S Area in the first place was to check out the market. As it turns out, Veem Market (or Vershalveem) did not disappoint. We have a thing for food markets given that Lisa lived in Copenhagen and we made a point of exploring the Danish food market culture there as well!

When you walk into Veem, the atmosphere is awesome. It’s just a large local food market with vendors selling everything from bread, cheeses, meats to vegetables, fruit and coffee, wine and beer – you name it. They also have a few places that do food right there – form “American style” hamburgers to Indonesian and Japanese cuisine.

In the end, we had a great wander out to the market and with Dutch Design Week happening, we really got to explore the area to its full potential!

Sample at the Bottle Distillery

Do you have a taste for the gin, brandy, vodka, and more? Then the Bottle Distillery is for you! Located in the Schellensfabriek (old textile factory) in the city centre, it’s easy to walk to from the train station.

Founded and run by a couple that is passionate about creating top-quality alcohols and the experience that goes into crafting it, they run a gin-making workshop, guided tours, and tastings. There is also a shop to be able to purchase the ones you enjoyed the most!

Since they have some structured tour times and other times when you can just pop in and they will accommodate, we’d suggest booking ahead/researching before your visit on the Bottle Distillery website. 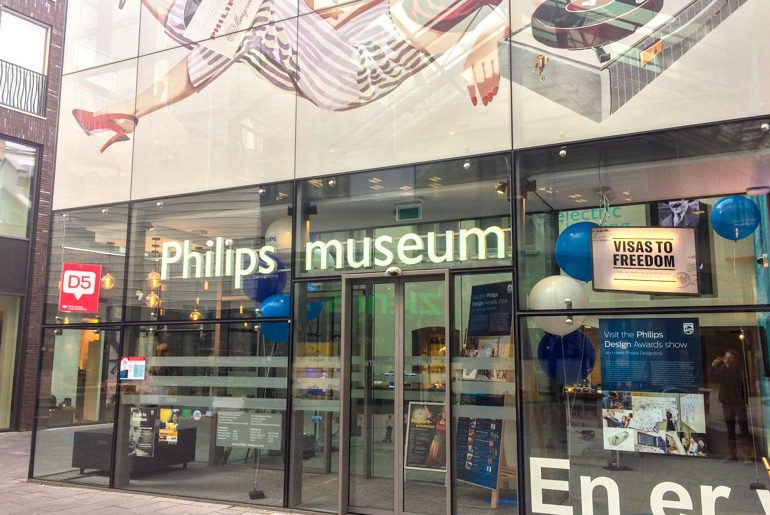 Eindhoven is the city that gave birth to the world-famous innovative electrical company, Philips! Founded back in 1891 making bulbs and lamps, the brand has shifted over the years to become a leader in technology. In the museum, the permanent exhibition walks you through the company’s interesting past. There are many stories and actual products on display, as well as exhibitions that come and go to add to the museum experience.

We thought that it was pretty cool to think that a global brand like Philips was started in Eindhoven. Just goes to show the significant impact the city has had on shaping our world. For the prices and opening hours, check out the official museum website.

Learn About The Past At PreHistorisch Dorp

The PreHistorisch Dorp is a large “theme park” open-air museum that lets visitors learn about 6 significant historical eras in the region – from prehistoric times to the Middle Ages! The interactive museum is located near Genneper Park and featured live actors that you can chat with to learn all about.

The museum places an emphasis on the Iron Age and the Middle Age since those periods are particularly fascinating for the history Dutch region. So, if you want to know what life was like back then – check out the prices and opening hours for PreHistorisch Dorp.

If you are a football fan (soccer for North Americans), then checking out Philips Stadium and the Museum might be for you. The stadium is home to the Philips Sport Vereniging (or PSV Eindhoven football club, for short). Fun Fact: the stadium is actually the third largest in the country!

The club itself was founded on the very same grounds where the stadium stands today back in 1913. So watching a PSV match is a great idea if you are in town. Because of this rich history to the club, you can also visit the PSV Museum – which has many jerseys, trophies, and a free audio guide – and/or do a stadium tour.

And there you have it – 12 of the top things to do in Eindhoven. We had a nice day walking around the city exploring everything that it has to offer. There is something for everyone – from history to drinking, to shopping, sports, food, and museums. We definitely need another day to cross everything off the list but since we live so close we can make the trip easily!