Lake Tekapo is one of the smallest yet most beautiful towns you’ll likely stay in during your New Zealand trip but has plenty of things to do. If you haven’t visited before, you’ll likely recognise it from the the pictures of the incredibly picturesque Church of the Good Shepherd overlooking the lake – it is the most photographed church in New Zealand. 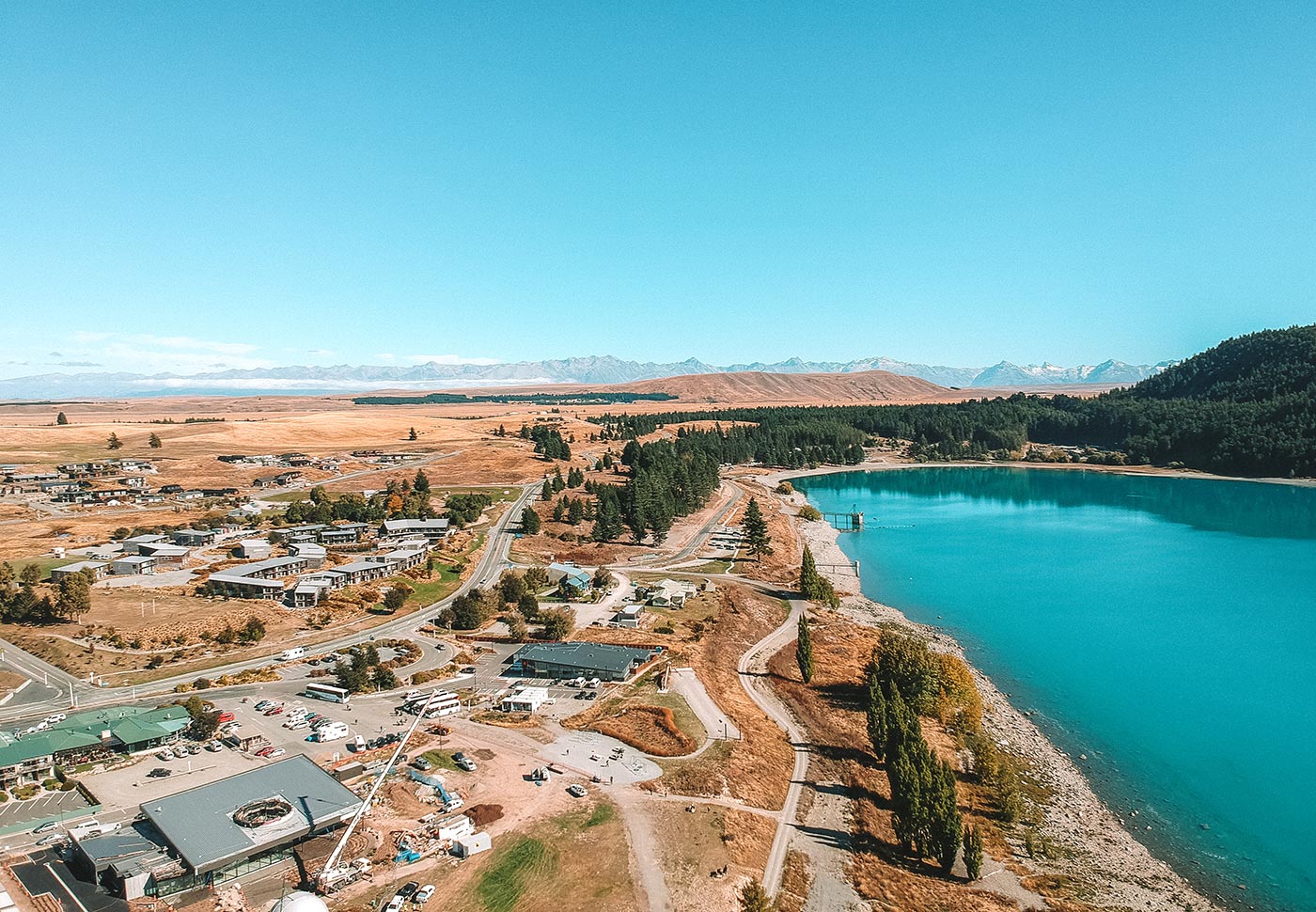 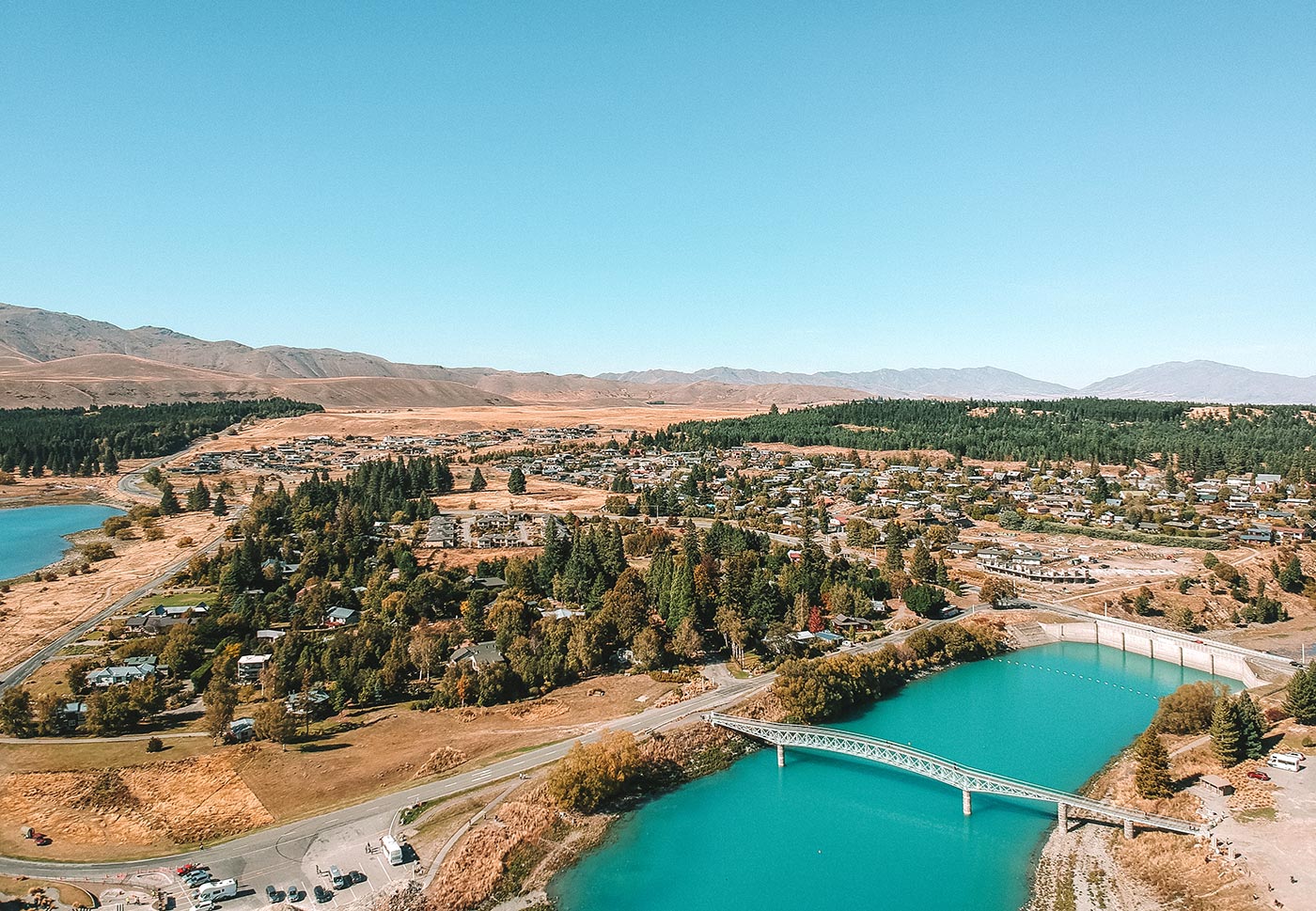 After several previous drive by visits, this was our first overnight stay in Tekapo. We had planned our south island itinerary months in advance and so were able to book cheap private hostel rooms this time – our advice is to definitely book ahead as accommodation options in this town are limited!

12 things to do in Lake Tekapo

Known for its crystal clear turquoise blue waters (a product of the surrounding glaciers), Lake Tekapo lies below the southern alps in New Zealand’s south island and is picture postcard material from every angle. It is a huge lake, covering 32 sq miles! 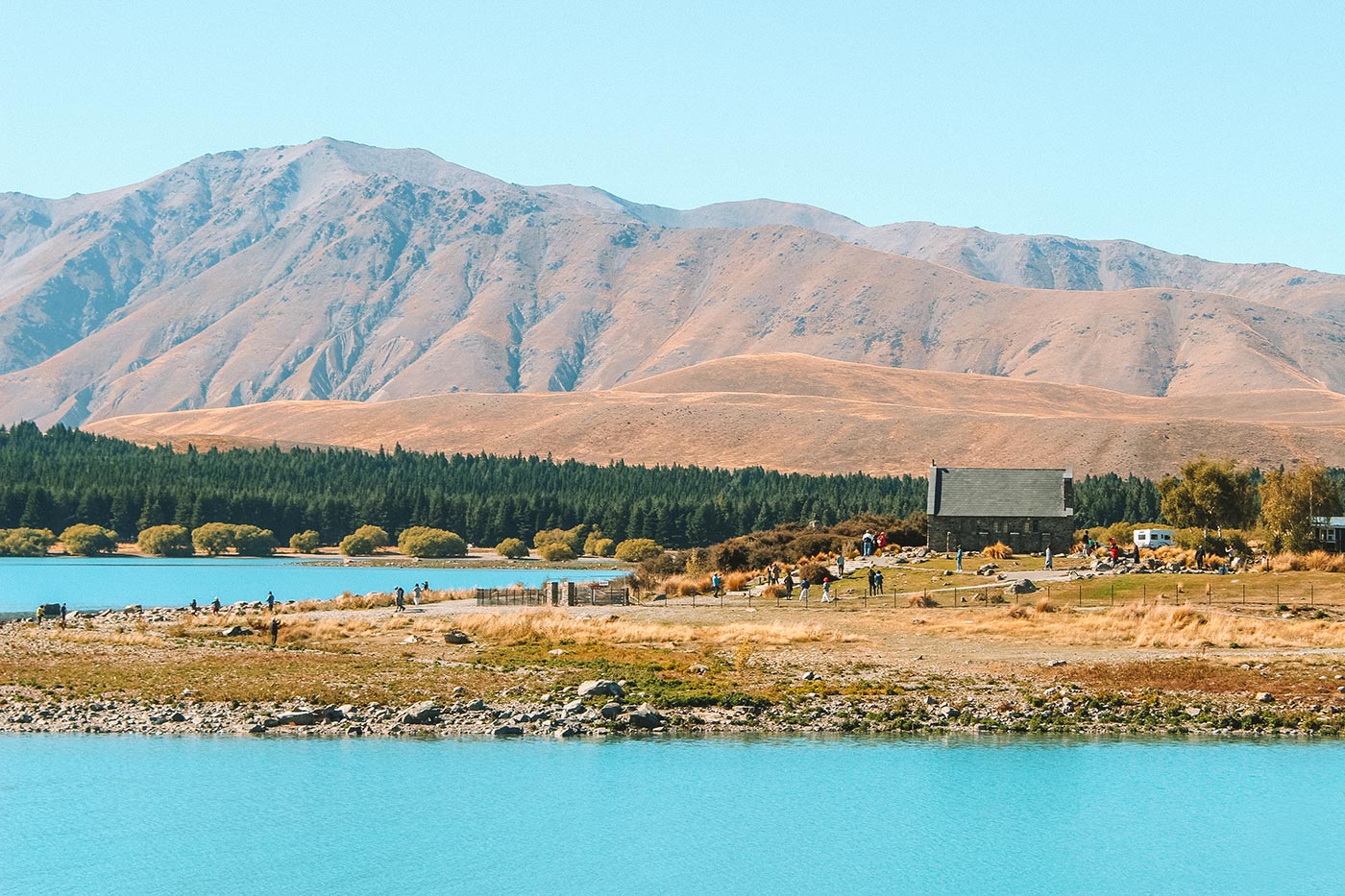 If you can time your visit to coincide during the ‘peak’ lupin season (November to December) do so as the sight of the blue lake with the pink and purple lupin flowers is like an explosion in a rainbow factory. We visited in March 2019 so had to contend ourselves with the odd isolated lupin. 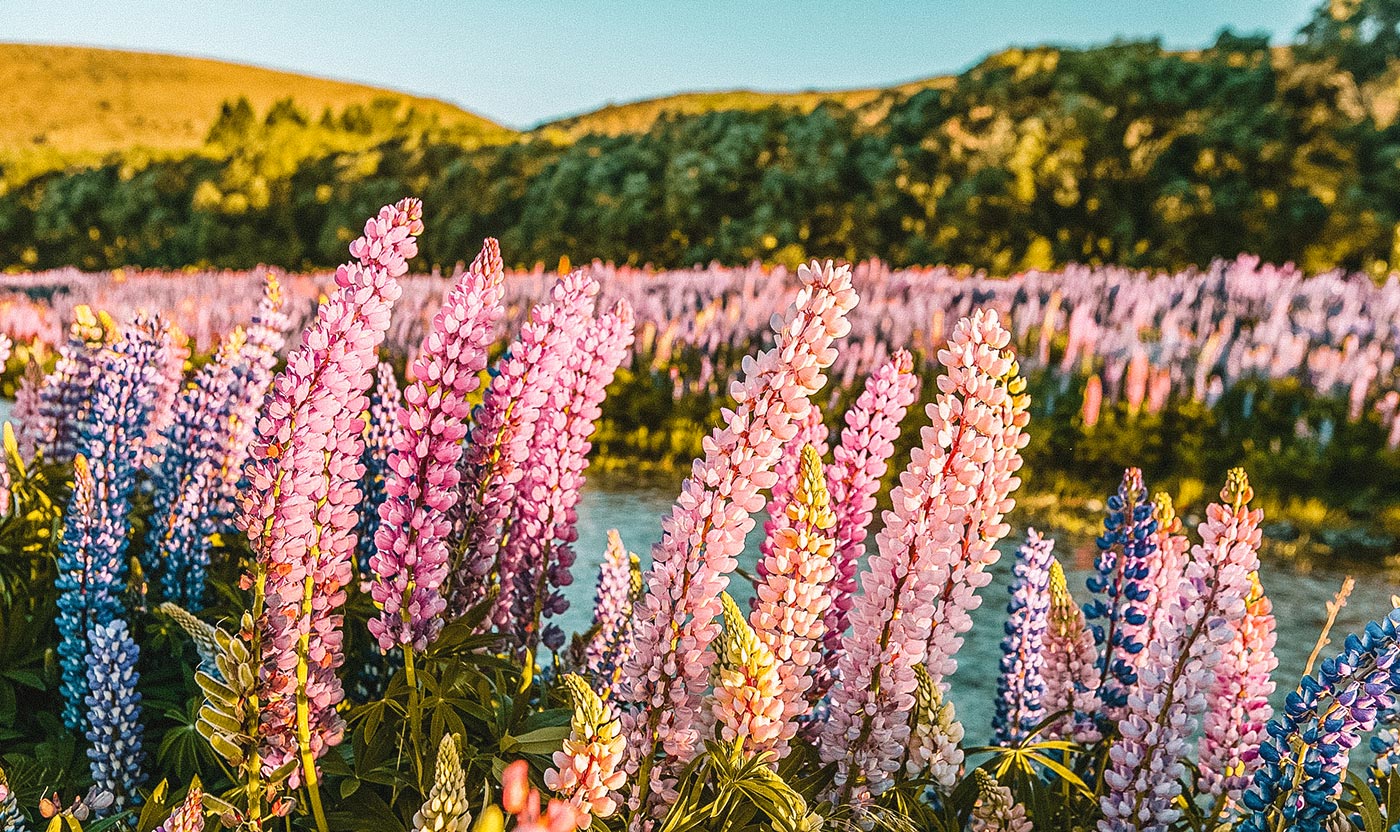 3. Church of the Good Shepherd

Is there a more picturesque church in New Zealand (if not the southern hemisphere) than the Church of the Good Shepherd? Instantly recognisable from Instagram, this is the one place in Tekapo where you won’t be feeling the tranquility of other Tekapo sights. The church is sooo lovely but we always try and plan our visits for very early in the morning, or early evening, when the tour buses have gone.

The church was built in 1935 and if you are lucky enough to go inside, you’ll see the main altar window frames spectacular views of the lake and surrounding mountains. It was also the very much church built in the Mackenzie Basin, and can be hired privately for weddings and ceremonies. 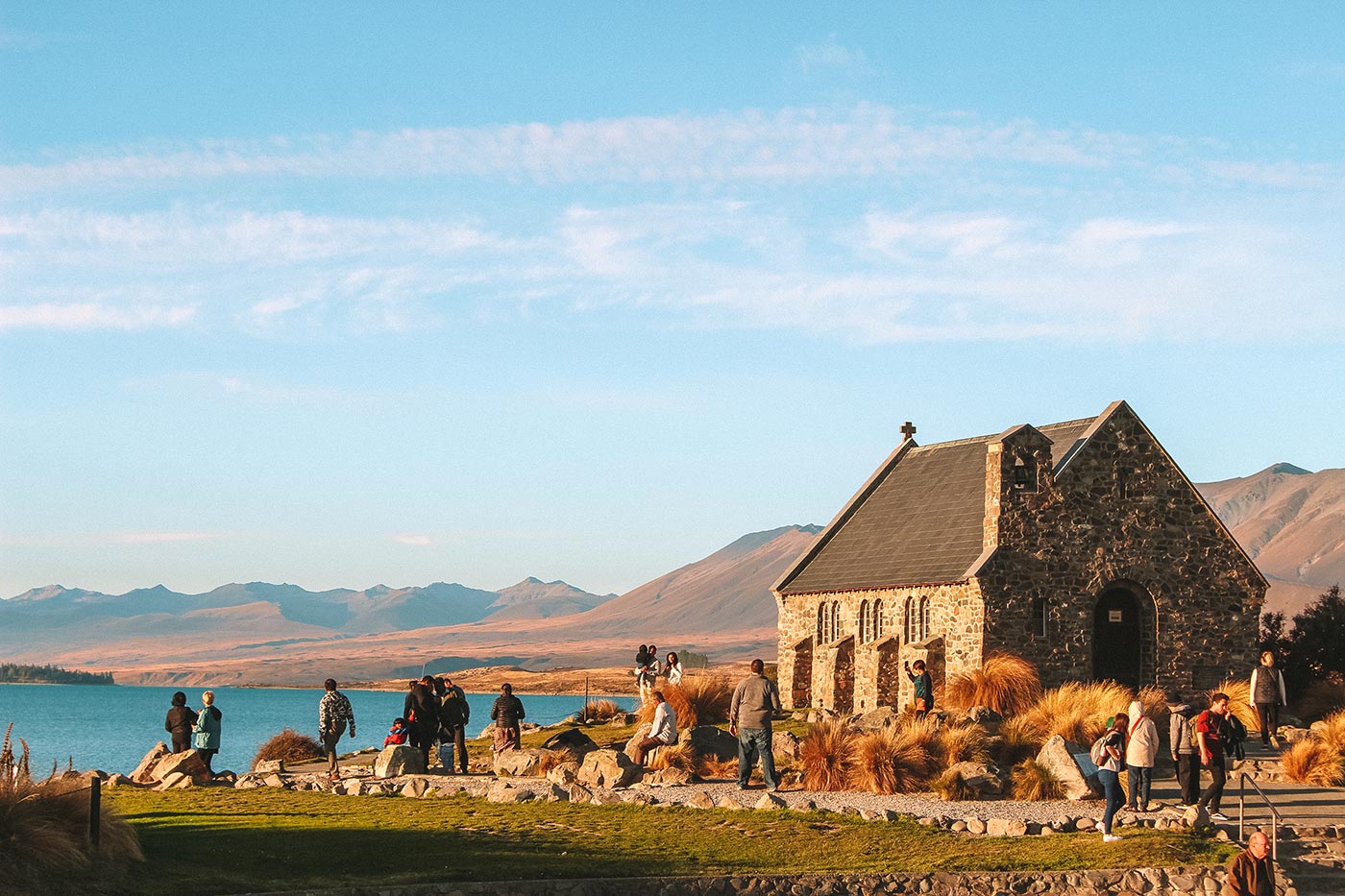 We were fortunate enough to see a small wedding take place on the day we visited – this was nice as we’d never seen a bride and groom at the chapel before, but it did mean the church and grounds were closed. We’ve also heard stories of wedding photographers trying to fly drones through the chapel to get the ultimate couple, church and lake shot – hmmmm.

Relaxing hot springs with mountain and lake views, you say? What isn’t to like about that! Just a short drive or fifteen minute walk from the township, Tekapo Springs is a really enjoyable way to spend an afternoon, unwinding, contemplating your next glass of Kiwi Sauvignon Blanc (was that last bit just me?) 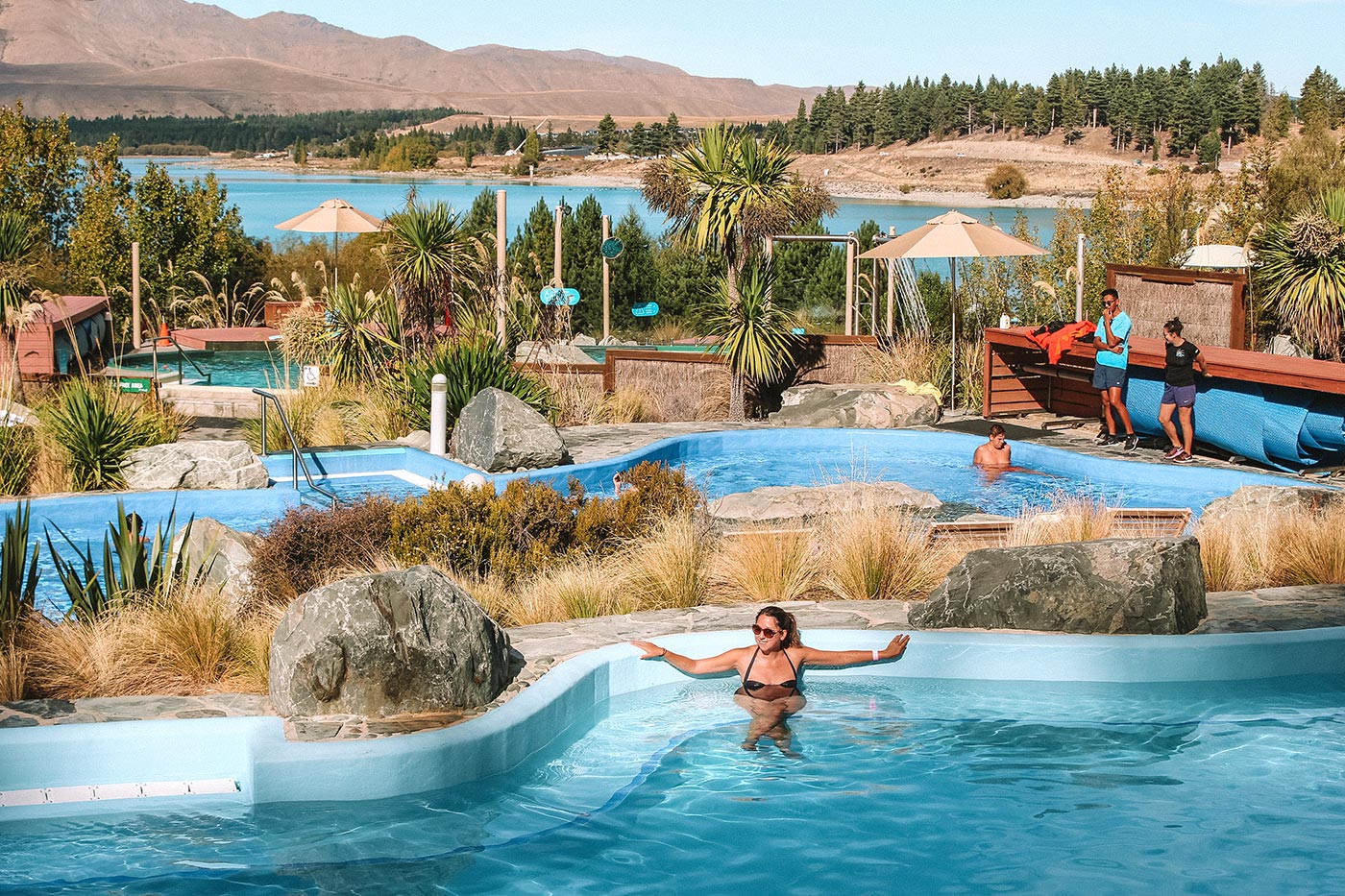 The complex comprises of several pools, all with slightly varying temperatures – we generally stayed in the warmest adults only pool. There is also a spa with heaps of treatments, sunbeds liberally scattered around the poolside plus an onsite cafe. We visited one weekday afternoon and were surprised how much room we had to swim and soak up the mineral goodness.

In winter activity options at Tekapo Springs include a snow tubing park and an outdoor ice skating rink!

After visited the Tekapo Springs by day, we then returned in the evening for an ‘out of this world’ experience…

Did you know that Lake Tekapo is part of a UNESCO Dark Sky Reserve, one of only two in the southern hemisphere, making it one of the best spots in the world for stargazing, due to very limited light pollution.

We weren’t aware of this until we took part in Tekapo Spring’s nightly stargazing sessions – this is a chance to see a galaxy far, far away with guidance from astronomy experts before a hot pool session under the stars. 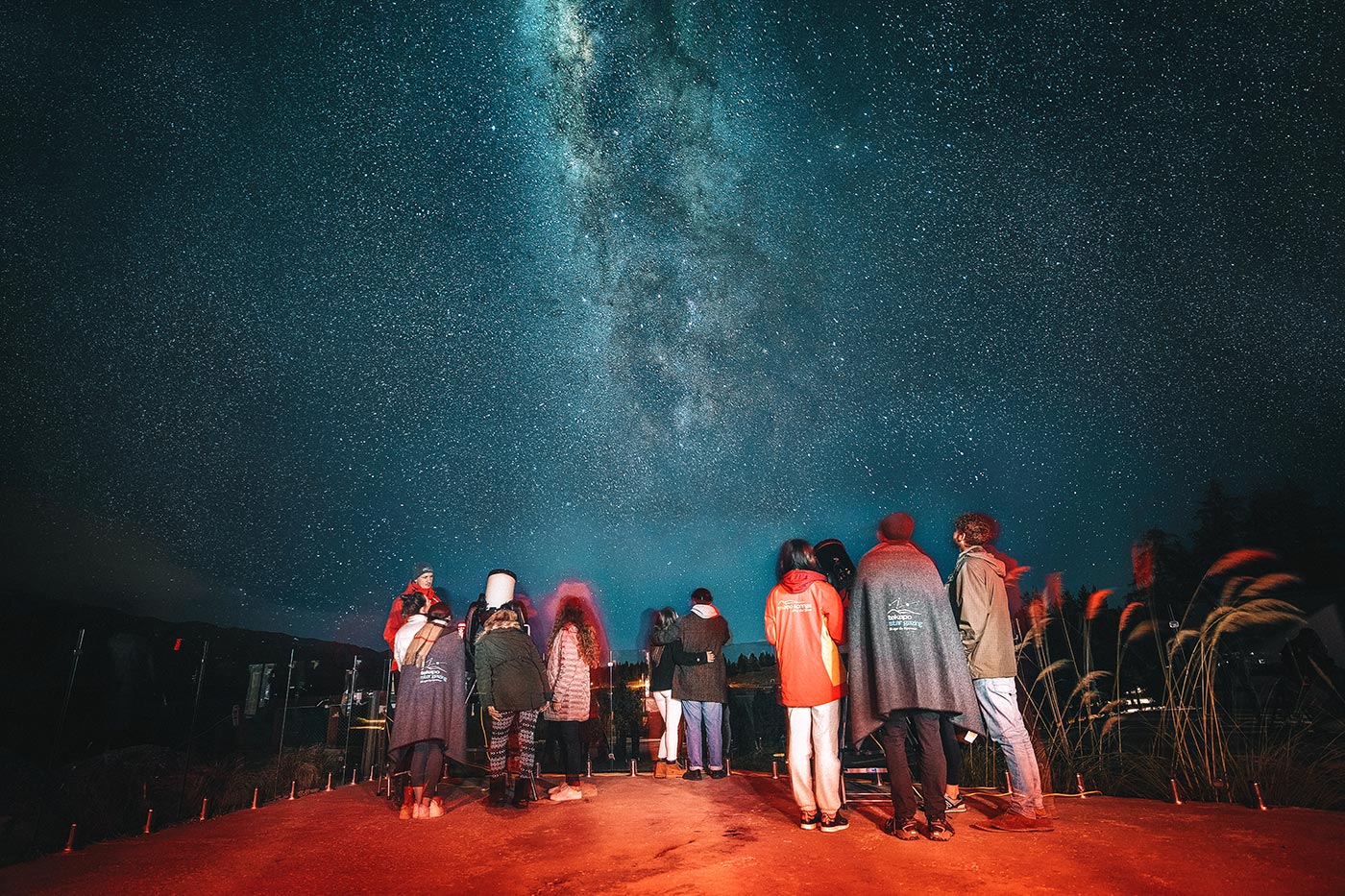 Your night-time adventure begins by being picked up from a central point in Tekapo town before being whisked away under the cover of darkness to Tekapo hot springs (it felt and looked so different compared to our daytime visit). After an initial indoor briefing (with some hot chocolate – nice!), we ventured outdoors and got to learn more about what we could see in the skies above us, plus use one of four telescopes (each one lined up to show us a different constellation or star etc).

The highlight of the night is then lying back (with the use of a floating hammock) in the hot pool, and looking up into the night sky, watching all the stars slowly focus into view – it takes a while for your eyes to adjust, but as they do, you have to pinch yourself to make sure this is really happening. 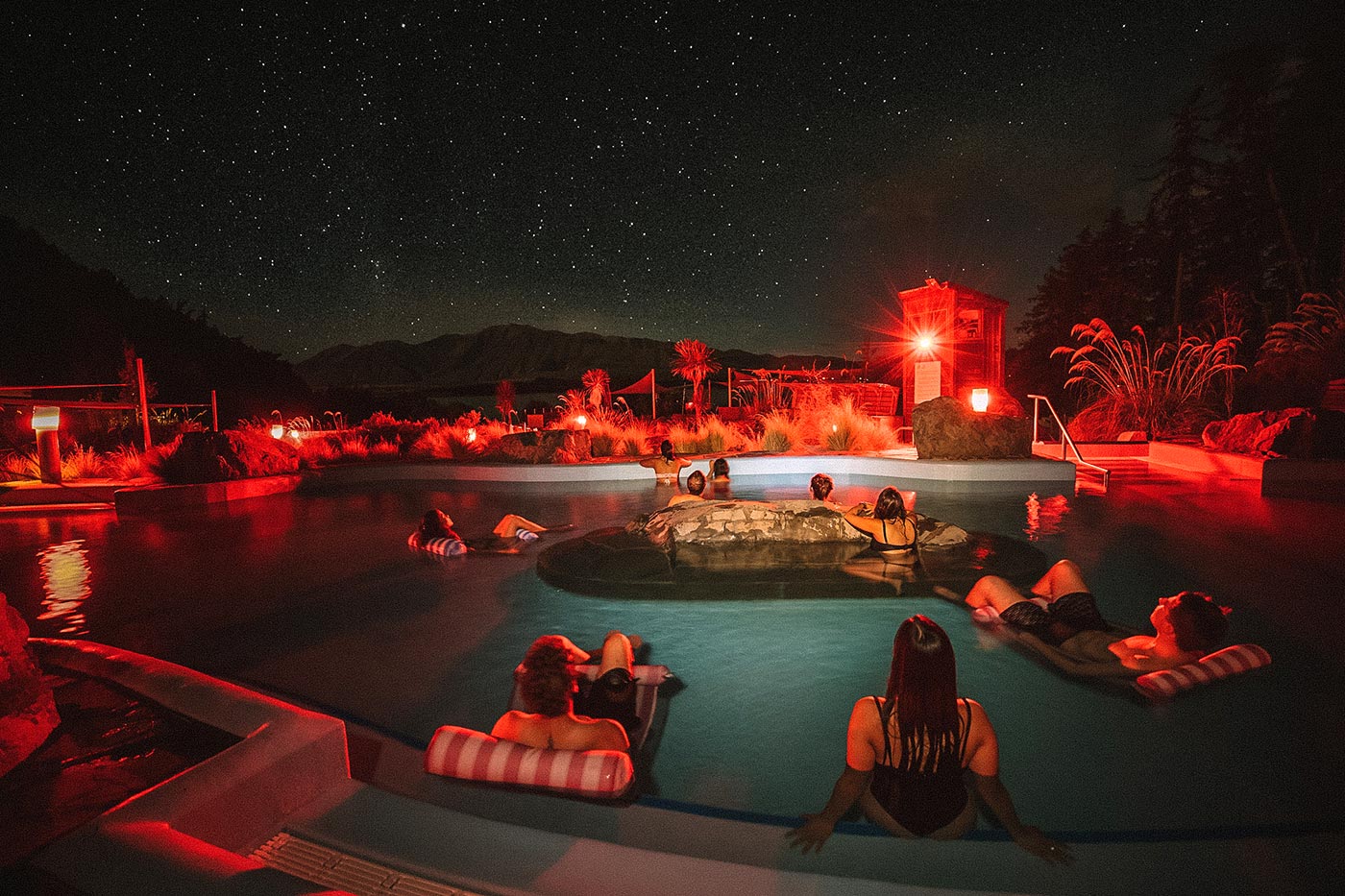 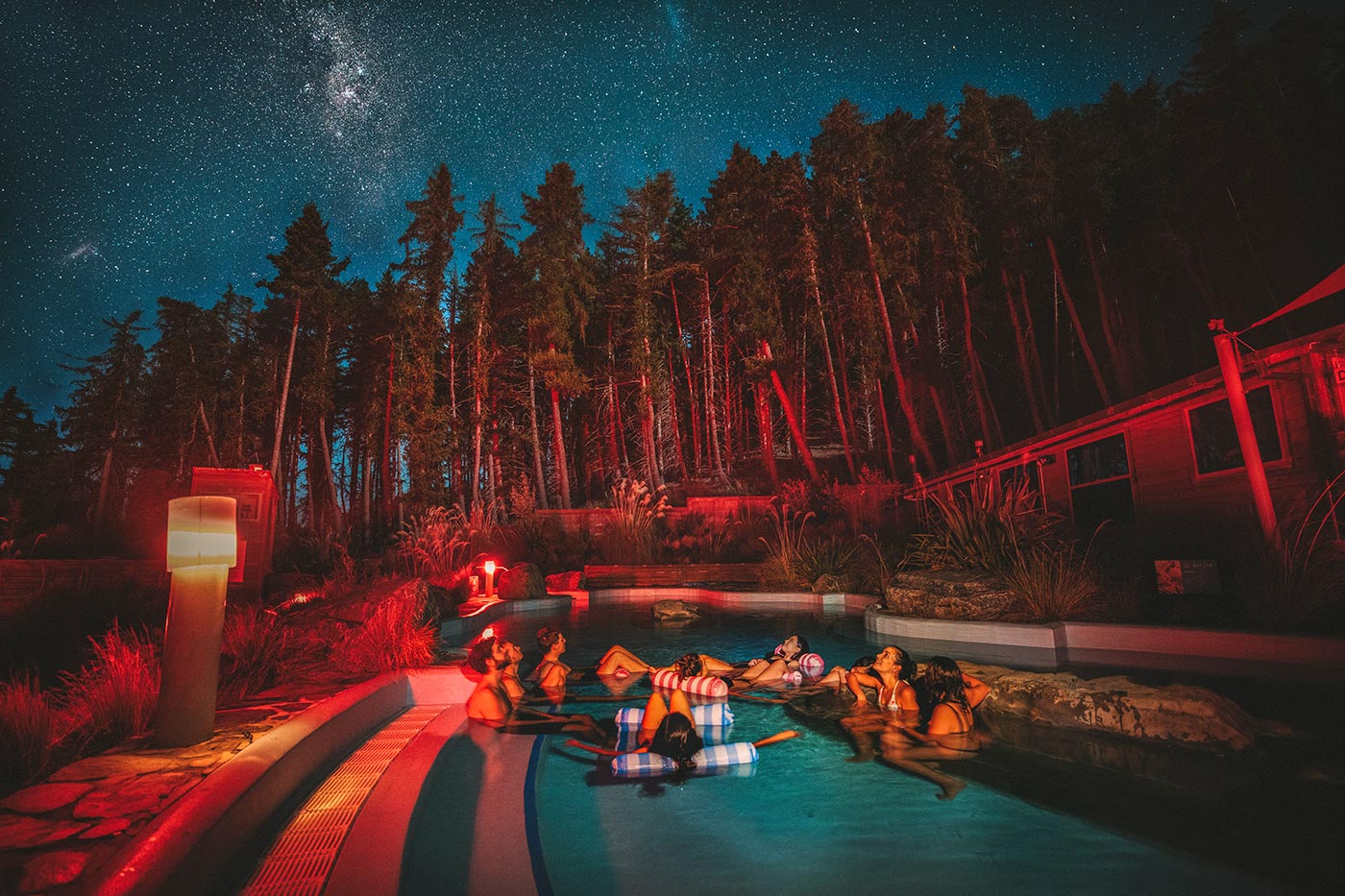 It is magical to see so many stars in the night sky from the swimming with your naked…eyes (you’ll hopefully be wearing a swimmingcostume). As you drift around on your floating hammock, staff regale you with stories of Maori legend and folklore plus there is a brief quiet time, when it is just you and the stars. A truly ‘stellar’ experience! 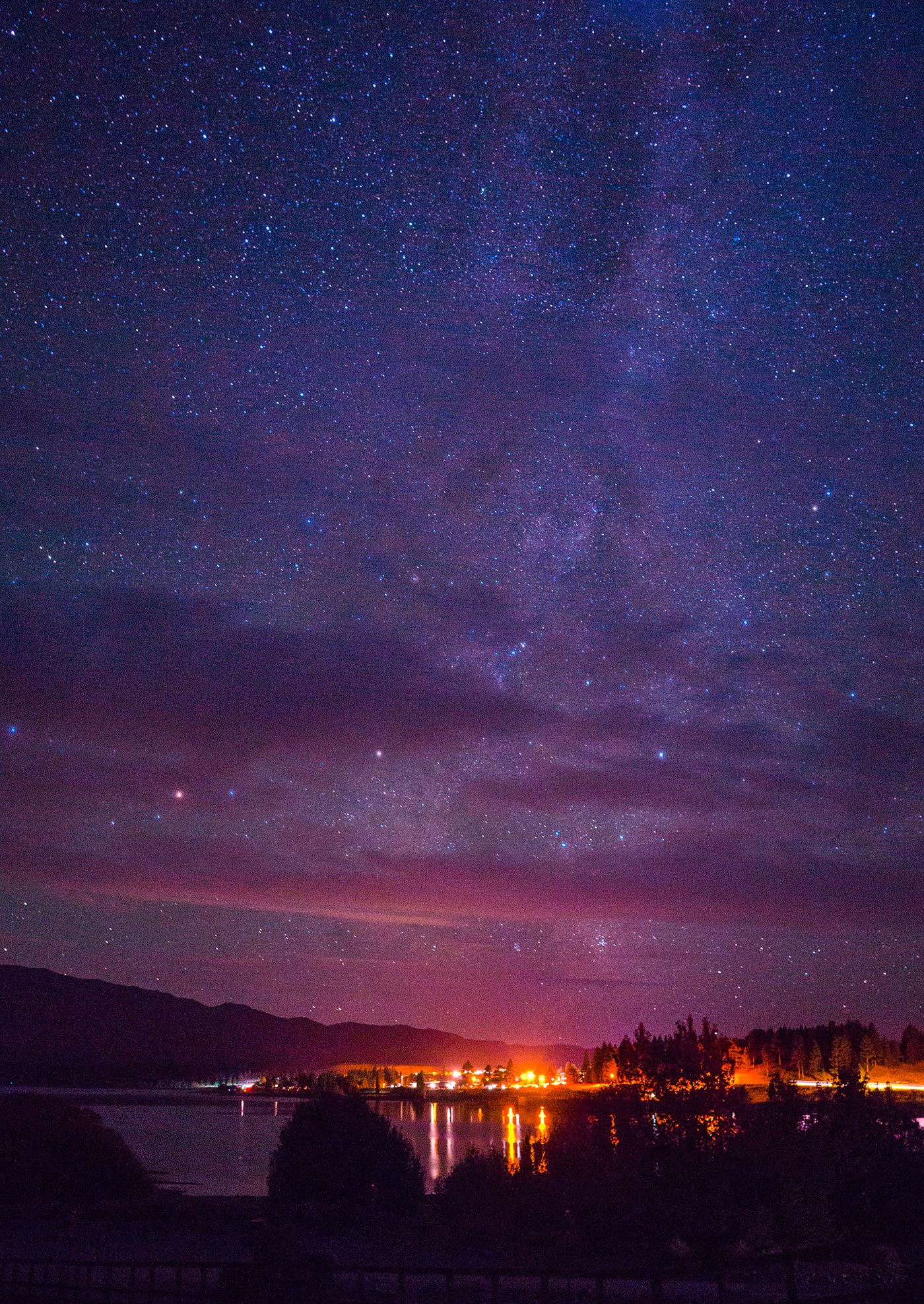 If night time hot pools aren’t your thing, then you can also observe the stars at the University of Canterbury Mount John University Observatory on the top of Mount John. This is billed as New Zealand’s premier astronomical research centre and you can use some of the country’s most powerful telescopes to spot up to 50 million stars and explore the observatory. Summit experience tours cost 149 NZD for an adult (including pickup and drop-off from their Lake Tekapo Office).

Make sure you dress up warm as it can be quite chilly at night!

They also have a brand new attraction down by the lake which is an indoor educational interactive experience which is prefect for families. Tours run 5 times a day and lasts 45 minutes

Enjoy breathtaking views as you fly high above the Southern Alps mountains with views of the turquoise blue water of Lake Tekapo and the braided river systems of the Mackenzie basin. There are multiple tour operators offering trips in either a helicopter or if you have a bigger budget – a small plane.

There are a range of short walks in the area with views of the lake and surrounding mountains that last from 1 hour to 4 hours long.

One of the most popular walks is the Mt John Summit Circuit – the track starts next to Tekapo springs, and an uphill zig-zag climb through forest will take you to the top of Mt. John for amazing views of the lake and surrounding mountains (and a cafe!).

No trip to New Zealand is complete without a jet boating trip where you can enjoy thrilling manoeuvres and 360 degree spins. If you missed out doing one in Queenstown then Lake Tekapo also offer rides which take in gorgeous views of ancient glacial valleys, and includes stops at some of Lake Tekapo’s iconic landmarks. The trips takes approximately 1 hour including pick up and drop off in their 4WD bus.

Immediately to the right of the Church of the Good Shepherd is the famous bronze statue of a Kiwi sheepdog, to recognise the important role of working dogs in the local area. The sculpture was based on a sheepdog called Haig, who belonged to the neighbours of sculptor Innes Elliot. The piece took 15 months to make, with the final bronze sculpture cast a little closer to home in London, UK in 1966 (it probably took longer than expected as we were likely still celebrating the England World Cup win that year!) 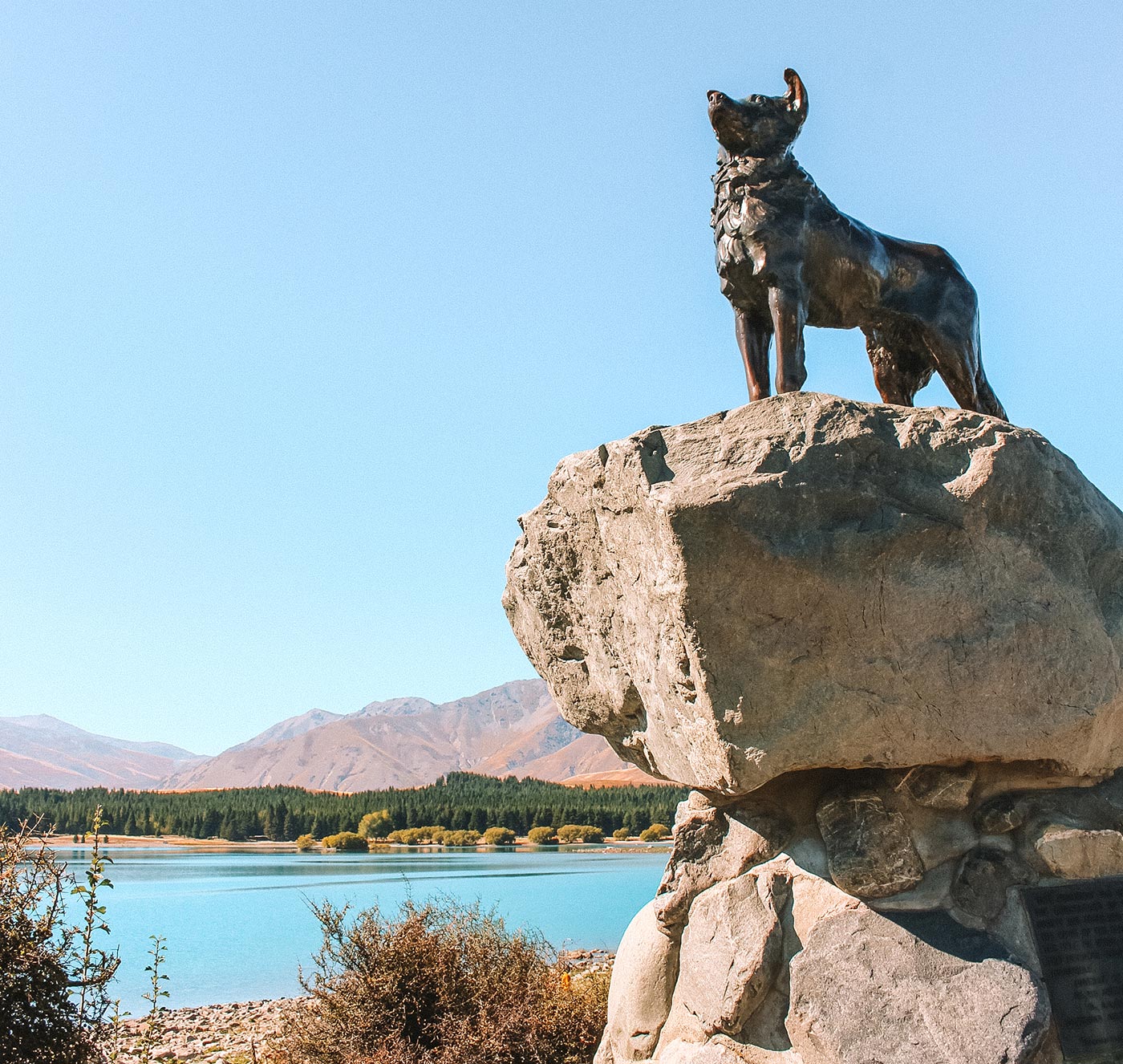 Lake Tekapo has 2 boutique ski resorts open during the winter months with spectacular scenic backdrops and views over the Southern Alps and Lake Tekapo.

Lake Alexandrina is a south island hidden gem – a far more peaceful lake than the larger Lake Tekapo which also has beautiful blue waters. The lake lies immediately to the west of Tekapo, a short 13 minute scenic drive from the village via Godley Peaks Road and Lake Alexandrina Road. There is a very tiny village there with a campsite and some Kiwi baches (holiday homes), but no shops, so make sure you bring some picnic supplies with you from Lake Tekapo.

Tip – walk up the 4WD trail next to the car park for amazing views of both Lake Tekapo, Lake Alexandrina and also Lake McGregor.

Lake Tekapo accommodation (especially private rooms in hostels) book up very quickly especially during the summer months (December – February), so make sure you plan any overnight stays well in advance. In the past we have always just driven through Lake Tekapo purely because we were too late to book budget hostel accommodation. Worst case and if you leave it last minute, this will give you an excuse to treat yo’ self…

As we were on a backpacker budget, we stayed at the Tailormade Backpackers Lake Tekapo Hostel – we had a nice quiet private ensuite room away from the main building and it was a great place to stay. The huge bunnies they kept in the garden which you could play with were a lovely added bonus. The only thing we didn’t like was how busy the kitchen could get (only 3 stove tops for a heck of a lot of backpackers), plus our cabin was freezing when we woke up in the morning. It is also located a bit of a walk from the lakefront so only recommended if you have your own transport.

The summer months of November – March are by far the best time to visit with long sunny warm days. The iconic colourful lupin flowers are also in full bloom in summer but can only be seen from mid November to mid December.

The winter months of June – September are very cold and snowy but equally pretty with snow capped mountains and a range of fun snow activities such as skiing, snowboarding and ice skating on offer.

Shoulder seasons between September to November and March to May are pleasant to visit as accommodation prices will be lower and crowds smaller.

Just try and avoid New Zealand school holiday dates as it can get very busy in this small town!

Lake Tekapo village is very small but it does have a decent Four Square supermarket, large gift shop and a good selection of cafes and restaurants including pizza, burgers, traditional kiwi cuisine, Korean, Chinese or Japanese.

Why I Loved Living In Wellington