The Netherlands is known everywhere as a land of windmills, canals, and tulips, and today’s visitors certainly will find these among its many tourist attractions. But along with the country’s many breathtaking gardens and picturesque villages, that sightseeing here will also find the vibrant capital city of Amsterdam filled with museums showcasing a rich heritage of artists (think Rembrandt and Van Gogh). Other places to visit include numerous medieval castles and cityscapes, along with a 13,800-acre national park, and a tide control system that’s been named one of the Seven Wonders of the Modern World.

Given the relatively small size of The Netherlands, all these attractions and fun things to do are within a relatively compact area, and the landscape is quite flat (the highest elevation is barely a thousand feet above sea level). Consequently, it’s extremely easy to do at least a little of your sightseeing the Dutch way: by bicycle. Many communities actively encourage the use of pedal power and provide free bikes to explore the sights.

However you choose to see the Netherlands, you’re guaranteed a great time in one of the friendliest and most liberal cultures in Europe. Be sure to plan your travel itinerary with our list of the top-rated tourist attractions in The Netherlands. 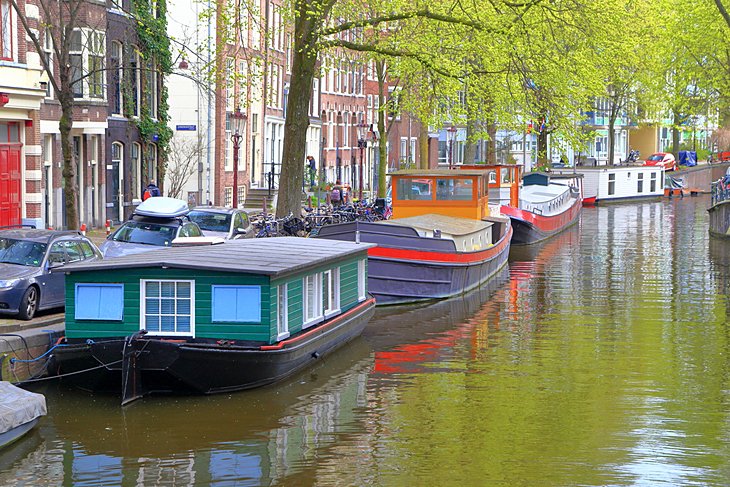 Canals are as important a part of Amsterdam’s cityscape as they are to the city of Venice, and some of the most enduring memories for any visitor are the time spent exploring the city’s wonderful waterways. While many of Amsterdam’s best tourist attractions can easily be accessed by boat tour or water taxi – including most of the major museums and art galleries – nothing beats strolling along the smaller, quieter streets that line the waterways.

Particularly charming is the Jordaan, a neighborhood built in the early 1600s to house workers and immigrants drawn here for the city’s religious tolerance. Along with its small canal-side houses, look for the neighborhood’s many “hofjes,” the quaint inner courtyards hidden behind the buildings.

Another photo-worthy neighborhood is the Grachtengordel, with its many small bridges and quaint 17th-century homes. You’ll be rewarded as you explore these 400-year-old streets with examples of beautiful architecture, small boutique shops, cafés, and gardens. Be sure to look out for the many houseboats moored along the canals.

Just a 10-minute stroll away is Dam Square, a must-visit when in Amsterdam. In addition to its numerous restaurants, cafés, and shops this vast public square is home to some of the city’s most-visited tourist attractions, including the spectacular Royal Palace (Koninklijk Palace); the attractive New Church (Nieuwe Kerk); and the country’s most important war memorial, the National Memorial Statue. 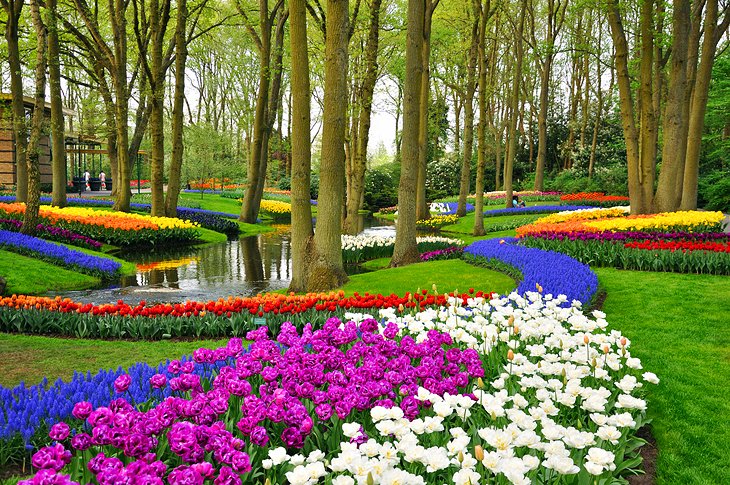 Think of the Netherlands, and you’ll inevitably think of tulips, the country’s most popular flower. And one of the most beautiful places to visit in the Netherlands showcases these and other spring bulbs in spectacular abundance.

Keukenhof, otherwise known as the “Garden of Europe,” is located on the outskirts of the town of Lisse in what’s widely considered the “bulb belt” of the Netherlands. The largest public garden in the world, encompassing more than 70 acres of what was once the former kitchen (or “keuken”) garden of a large country estate, Keukenhof displays more than 700 varieties of tulips, which are at their height in April and May.

But thanks to its massive commercial hothouses, the display continues almost year-round. In these, you’ll see endless rows of flowering tulips, along with thousands of hyacinths, crocuses, and daffodils. 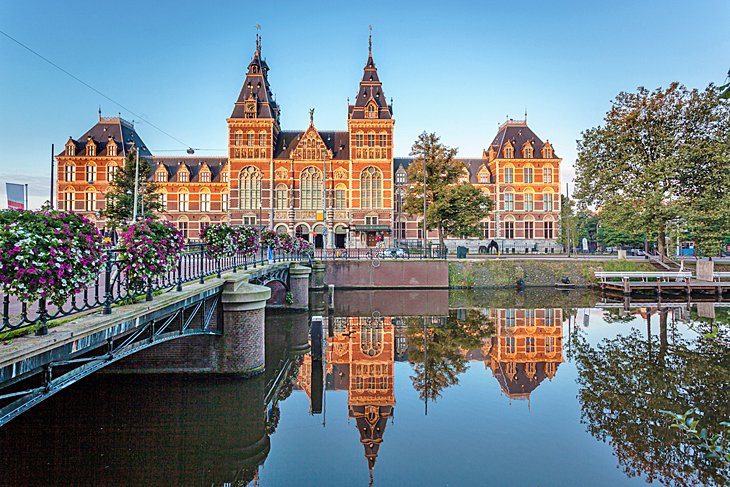 The spectacular Rijksmuseum – aka the National Museum – in Amsterdam’s Museumplein (Museum Square) has been collecting rare art and antiquities since 1809. Not surprisingly, its extensive collection today amounts to nearly seven million works of art, including 5,000 paintings in more than 250 rooms, as well as a vast library with some 35,000 books.

Apart from its unique collection of old masters, this spectacular museum offers an exhaustive account of the development of art and culture in the Netherlands and is especially rich in traditional Dutch handicrafts, medieval sculpture, and modern art. Be prepared to spend the best part of a day – or longer – exploring this museum’s endless treasures.

If you’ve time to squeeze a little more Rembrandt into your Amsterdam travel itinerary, here’s a must-visit for you: the Rembrandt House Museum, located in the city’s historic Jewish Quarter. Many of his best-known works were painted during the 20 years the great artist spent here, with some still recognizable scenes from the neighborhood. The house remains much as it would have been during Rembrandt’s life (guided tours are available). 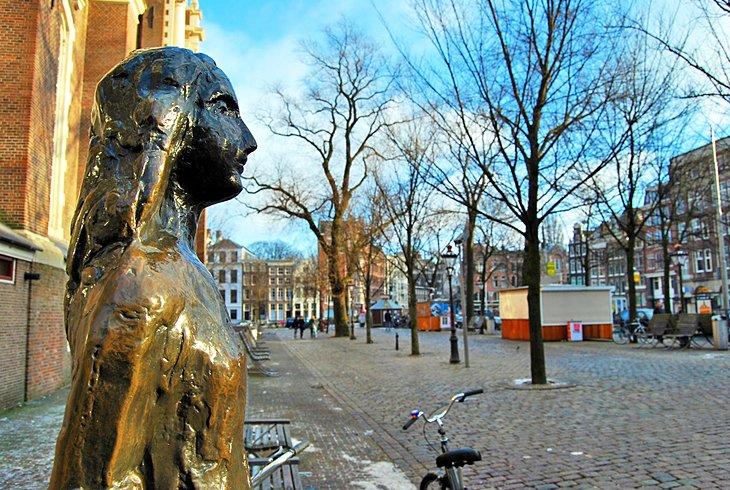 The Anne Frank House is a must-see when in Amsterdam. On Prinsengracht, in the home where Anne’s family hid for much of WWII (they were Jewish refugees from Frankfurt), is where this remarkable girl wrote her famous diary. Although she died just two months before the war ended, her legacy lives on through her words, which have since been translated into 51 languages.

The back of the fully-restored house where the Frank family had their hiding place has been kept in its original state as much as possible and is a poignant monument to a tragic slice of world history and a brave young woman who continues to inspire people around the globe. A word of caution: tickets for this must-see attraction do sell out, so be sure to reserve yours online well ahead of time. As befits one of the world’s greatest artists, the spectacular Van Gogh Museum in Amsterdam is ranked an impressive #2 in a leading list of the top art museums globally, attracting almost 1.5 million visitors each year.

Home to the world’s largest collection of Van Gogh paintings – many donated by the artist’s family – this impressive gallery and museum were specially built to showcase the more than 200 paintings, 500 drawings, and 700 letters in its vast collection.

Works by his contemporaries are also on display. A highlight is participating in the museum’s new “Meet Vincent Van Gogh Experience,” which offers a fascinating, high-tech, interactive look at the artist’s life and times, as well as his best-known work.

6. The Windmills of Kinderdijk 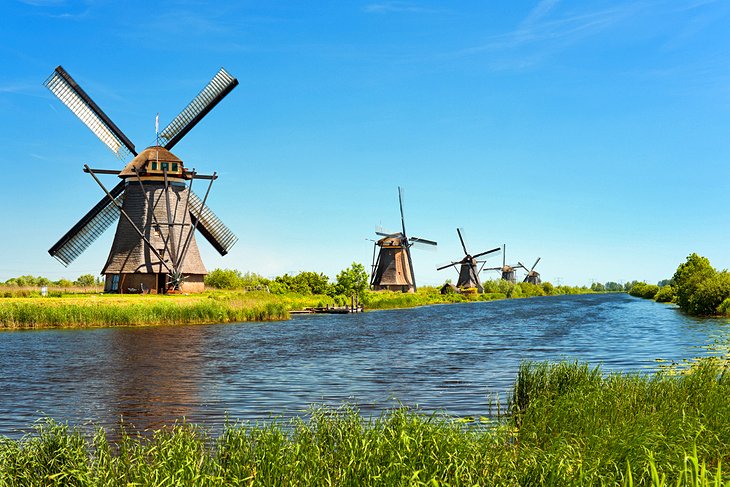 On the River Noord between Rotterdam and Dordrecht is the famous village of Kinderdijk (“Children’s Dike”), which takes its name from an incident during the St. Elizabeth’s Day flood of 1421 after a child’s cradle had been stranded on the dike.

The big draw these days is the fantastically preserved 18th-century windmills. Now UNESCO World Heritage Sites, the 19 Kinderdijk windmills, built between 1722 and 1761, are the largest surviving concentration of windmills in the Netherlands. Originally used to drain the fenlands, these majestic buildings with their impressive 92-foot sails are open to the public from April to October, including special Mill Days when the sails are set in motion. 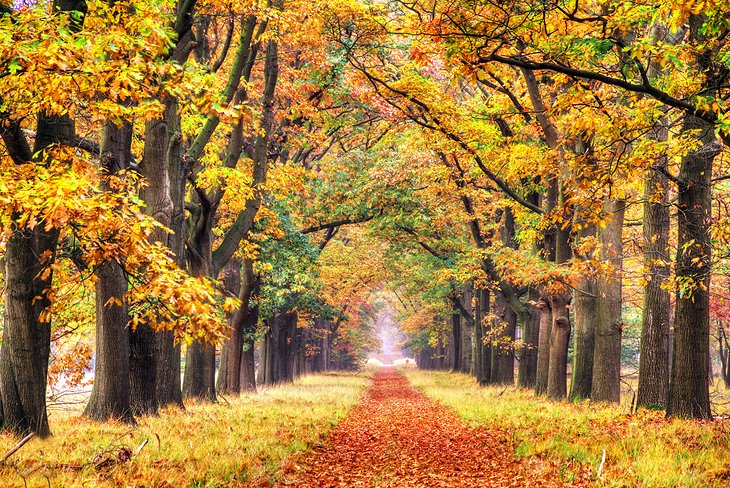 You may be surprised to learn that the Netherlands, a relatively small country, boasts one of the world’s most diverse national park programs. The largest is De Hoge Veluwe National Park (Nationaal Park De Hoge Veluwe), between Arnhem and Apeldoorn. Covering nearly 13,800 acres, this national park is the largest continuous nature reserve in the country, as well as being one of the most popular day trip destinations for locals and visitors alike.

Featuring dense woodlands in the north, as well as a fascinating sculpture park, the area was once a country estate and hunting reserve, and to this day is home to much red and roe deer. The best-preserved part of the park encompasses an area of dramatic dunes interspersed with heath and woodland and interrupted in the south and east by moraines up to 100 meters high. It’s also a popular area for bird-watching, as well as hiking and biking (use of bikes is free to visitors).

The highlight of this beautiful park for many – and the reason many people choose to come here – is the outstanding Kröller-Müller Museum (Rijksmuseum Kröller-Müller), housing the world’s second-largest collection of works by Van Gogh. In addition, the collections include Impressionist and Expressionist paintings by Cézanne, Manet, Monet, and Renoir. Outdoors, one of Europe’s largest sculpture gardens shows works by Rodin, Hepworth, Dubuffet, and others. 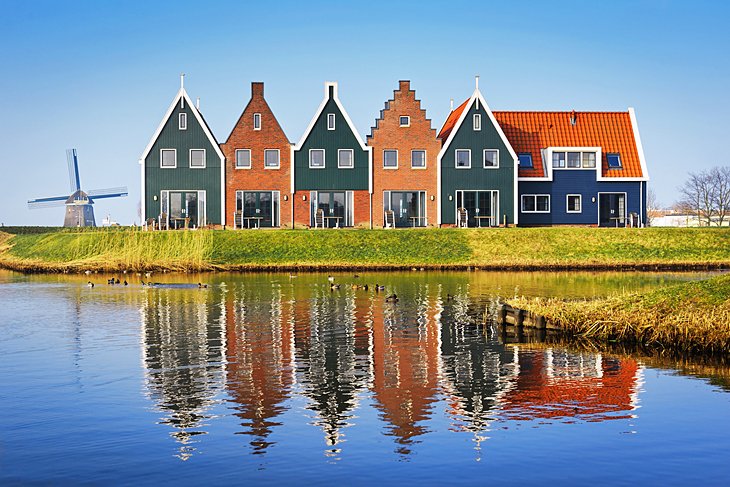 Among the most beautiful villages in the Netherlands are the small hamlets along the Ijsselmeer (Lake Ijssel), the freshwater lake that resulted from the closing of the sea entrance to the Zuider Zee. These towns flourished during Amsterdam’s Golden Age, when they had access to the Atlantic and prospered as fishing and trade centers, but lost importance as the harbors silted up.

Time seems to have stood still for the fishing village of Marken and the seaports of Volendam and Enkhuizen, where many of the colorful houses have become museums and shops. Enkhuizen has preserved many of its buildings and seafaring industries in the open-air Zuiderzee Museum, where the cultural heritage and maritime history of the old Zuiderzee region are preserved. Here, you can see craftsmen at work learning old maritime skills. In Volendam’s harbor, you can see a collection of colorful old wooden boats. 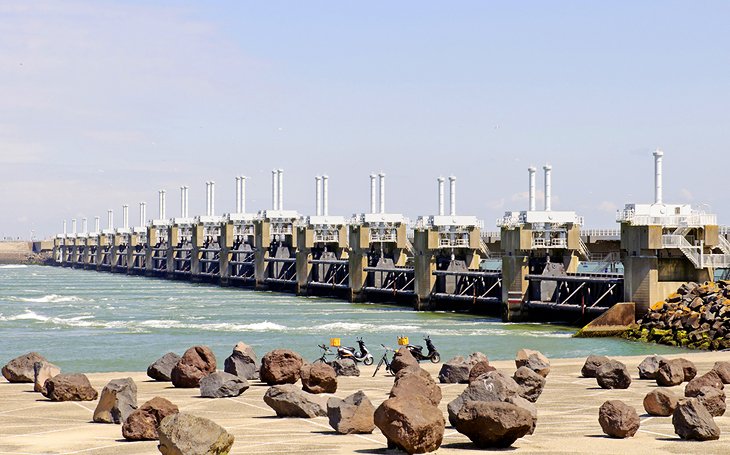 Incorporating the deltas of the Rhine, the Maas, and the Schelde Rivers, Zeeland includes the numerous islands and peninsulas of the southwestern section of the Netherlands. Much of this area of recently formed land is below sea level and therefore reliant upon impressive dikes, as well as modern flood prevention techniques.

As you travel the area, you’ll see evidence of the mega-engineering project known as the Delta Works. These massive structures – basically hi-tech dams – can control how much water enters the area’s key estuaries from the North Sea. Consisting of dams, sluices, locks, dikes, and storm-surge barriers, this awe-inspiring US$7 billion project has been declared one of the Seven Wonders of the Modern World. 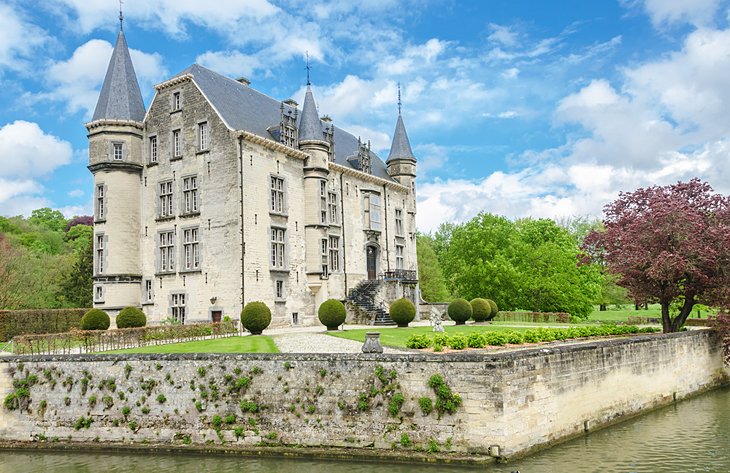 For those looking for a little ancient history, the Netherlands is not without its own medieval (and earlier) attractions. Romantic little Valkenburg, in the picturesque Geul Valley, boasts the country’s only hilltop castle. Long a popular holiday resort, the town’s other big draws are its many caves and the spa facilities at Thermae 2000, one of the largest such establishments in the Netherlands.

In addition to the ruins of the 12th-century castle on Dwingelrots (Castle Rock), there’s also the interesting 14th-century St. Nicolaaskerk Basilica. Another highlight is the town’s famous Christmas Market (mid-November to December 23rd) held in the Velvet Caves, the maze of old passageways leading to and from the castle. 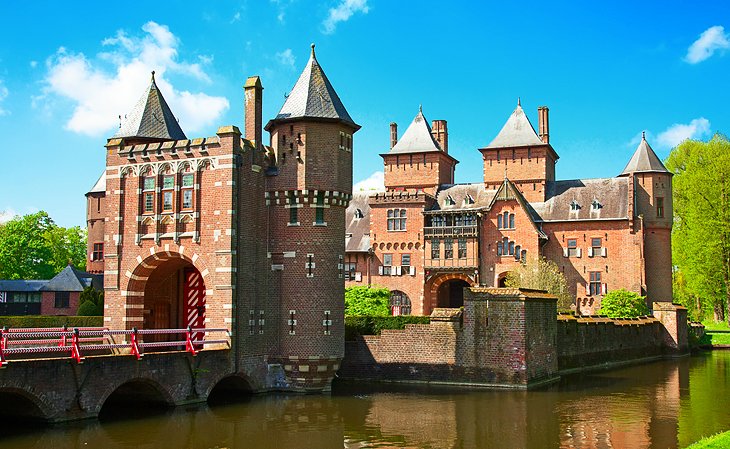 Near the lovely old city of Utrecht, the fourth largest in the Netherlands, De Haar Castle (Kasteel De Haar) is the largest fortification in the country. This spectacular castle, built by the famous Dutch architect PJH Cuypers, required so much land (it sits on a spectacular 250-acre park) that the entire village of Haarzuilens had to be relocated to accommodate it. While the original castle site was established in the 14th century, this newer structure dates from 1892 and is well worth taking the time to explore.

Inside, you’ll be rewarded with impressive collections of antiques, furniture, paintings, and tapestries, but it’s the gardens that really draw the crowds – along with the castle’s fairy-tale looks.

Best Time to Visit the Netherlands 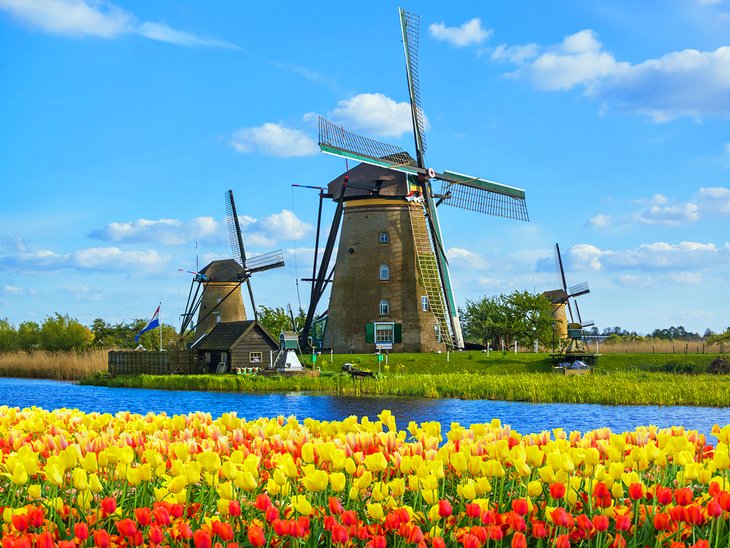 As one of the most visited countries in Europe, the Netherlands – in particular Amsterdam – can get pretty busy during the peak summer months, especially in July when the schools break up. The spring shoulder months of April and May are a great time to visit, with many of the country’s best parks and gardens bursting into life with an abundance of greenery and flowers (tulips are everywhere in the Netherlands!).

7 cities in the Netherlands “attracted” tourists

1 thought on “11 Top-Rated Tourist Attractions in the Netherlands”