Situated at the point where the River Danube enters the Wachau Valley, the picturesque little town of Melk is best known for its massive Benedictine Abbey, one of the most splendid monastic houses in Austria.

Originally a Roman fortified post called Namare, Melk was later occupied by a castle built to defend the border. In 1089, the castle was handed to the Benedictines and in 1113, the bones of St. Koloman were moved there, ensuring its fame as a place of pilgrimage.

By the 13th century, Melk had become an important market town. After the original abbey had been damaged several times by fire, the present magnificent Baroque structure was built between 1702 and 1738. Melk remains one of the best places to visit in Austria for its many historic buildings, particularly its old town center, which has preserved much of its original architectural heritage.

The countryside surrounding Melk also has several attractions for tourists. The Donauradweg cycling path is one of the loveliest bicycle routes in all Europe, connecting riverside towns and scenic natural areas. Several castles are within a few kilometers, including the 900-year-old Renaissance Schloss Schallaburg; Schloss Schönbühel; and Aggstein Castle, in romantic ruins.

To learn more about these and other points of interest in the area, be sure to read through our list of the top tourist attractions in Melk. 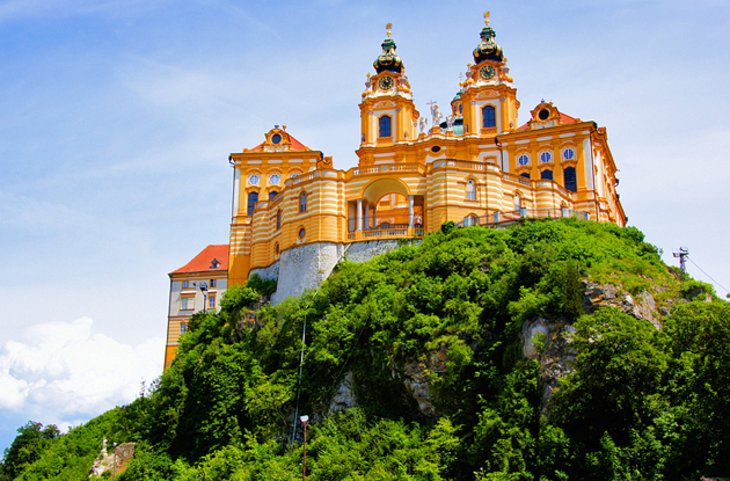 Standing grandly above the Danube and looking more like an imperial palace than a monastery, the buildings of Melk Abbey (Stift Melk) are laid out around seven courtyards.

The most prominent part of the complex, which has a total length of 325 meters, is the west end. Here, its twin-towered church rises above a semicircular terrace. The abbey’s octagonal domed entrance gate, flanked by the statues of St. Koloman and St. Leopold, leads into the forecourt (Torwartlhof), with superb views of its magnificent east façade.

Interior highlights include the Imperial Staircase (Kaiserstiege), the banisters of which are decorated with cherubs and stone statues, and the Imperial Rooms (Kaiserzimmer), now home to the abbey’s museum. Also notable is the 196-meter-long Imperial Corridor (Kaisergang), with its portraits of Austria’s rulers.

Anther important feature is the exquisite Marble Hall (Marmorsaal). This sumptuous room features fine ceiling paintings showing mythological scenes extolling the virtues of the ruling house of Austria. The library is also worth viewing, with its beautiful ceiling paintings and more than 90,000 volumes and rare manuscripts.

The Abbey Church is considered the finest Baroque church north of the Alps. It’s famous for its twin towers surmounted by helm roofs, along with its outstanding interior with superb 18th-century ceiling paintings. Also noteworthy are its ornate choir stalls and confessional chair, and the artistically carved pulpit and high altar with figures of the patron saints of the church, St. Peter and St. Paul. English language guided tours are available.

Also of note are the abbey’s superb gardens, with a Baroque Garden Pavilion (separate admission required). The attraction also boasts a regular program of organ recitals. For a truly memorable visit, consider a stay at the Abbey’s Guest House. 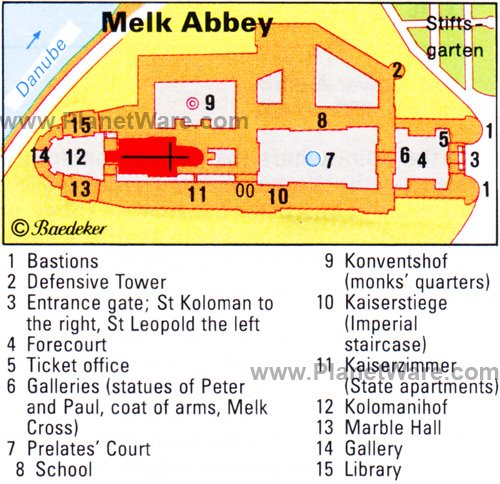 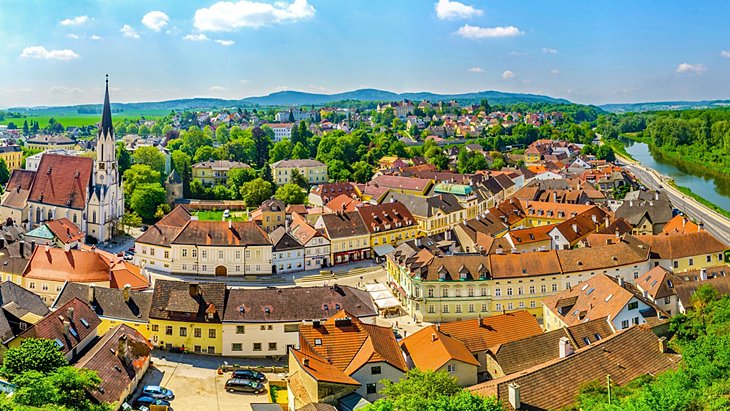 Take some time to stroll through the narrow streets of Old Town Melk, below the Benedictine Abbey. The Town Hall Square (Rathausplatz), the Hauptstrasse, and the Main Square (Hauptplatz) form the village center, together with Kremser Strasse and Wiener Strasse.

In Rathausplatz stands the old House for Itinerants (Lebzelterhaus) from 1657 with its fine painted windows, and the Rathaus bearing the town’s coat of arms. In Sterngasse is the old abbey tavern dating from 1736 with its stone statue of the Coronation of Our Lady, while parts of the old town wall and the Nibelungen Memorial Tablet (Nibelungen-Gedenktafel) can be visited in Kremser Strasse.

Be sure to venture down to the banks of the Danube, home to the old shipping master’s house and great views of the river. Finally, south of Linzer Strasse stands the old post office built in 1792 and now a local museum. 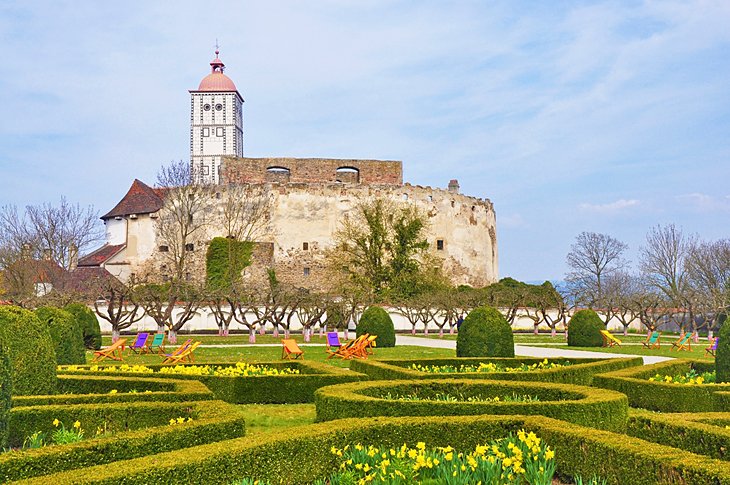 A mix of Romanesque palace and Gothic chapel, the schloss features elegant cantilevered staircases and numerous terra-cotta decorations depicting characters from mythology. Most notable of these are depictions of the legendary Hundefräulein, a woman with the head of a dog, along with ancient gods and animals.

English language guided tours, including exclusive evening tours, are available upon request. Afterwards, be sure to explore the flowerbeds and orchards of the superb castle gardens. 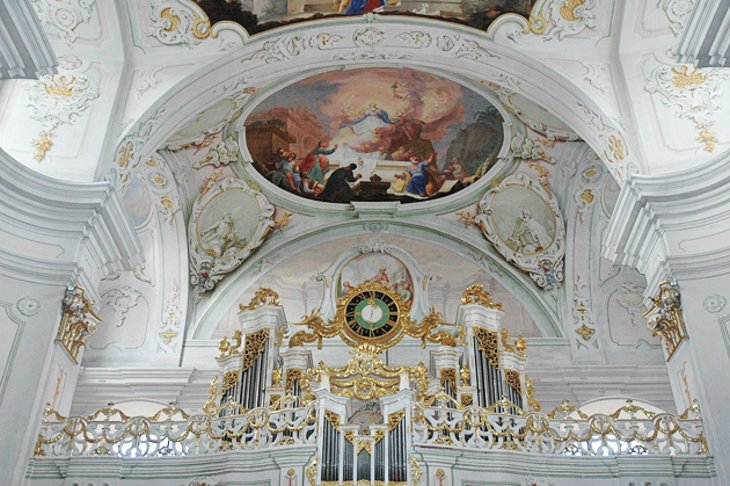 Just 12 kilometers northeast of Melk and also on the Danube is the small town of Aggsbach-Dorf, famous as the home of the Servite monastery of Maria Langegg. Perched 550 meters above the Danube, this stunning structure was rebuilt in Baroque style in 1773, with some interesting old frescoes and a fine library added.

A highlight of this popular tourist attraction is the pilgrimage church with its imposing north tower façade and rich interior with many wall paintings, a Baroque pulpit, and a fully-restored 18th-century organ. Also worth visiting is the Pilgrimage Museum (Wallfahrtsmuseum) with its history of Maria Langegg and artifacts from the monastery’s library and treasury.

After exploring the abbey church and the village, cross the Danube to Aggsbach Markt. This popular holiday resort is notable for its Late Romanesque 13th-century parish church. 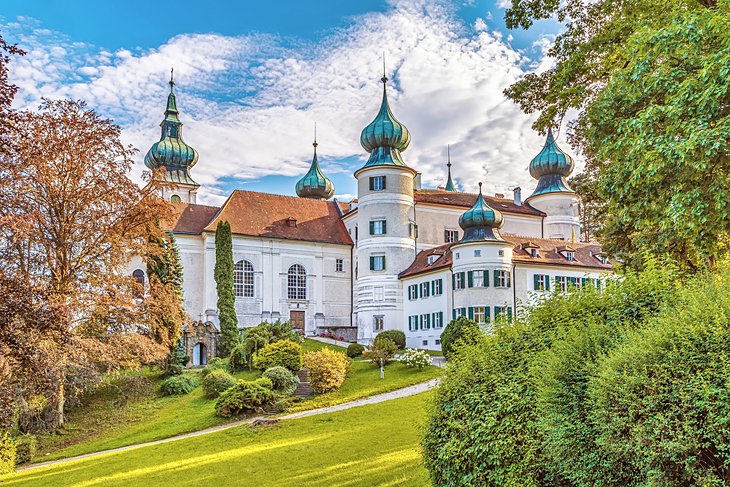 Visitors with a feel for history will be fascinated to tour Artstetten Castle (Schloss Artstetten). This stunning chateau was the hereditary castle of Archduke Franz Ferdinand of Austria, heir to the Hapsburg throne, whose assassination precipitated World War I. He and his wife are interred in the crypt here, and the castle is filled with historical objects relating to the archduke and the Hapsburg family.

Although signage is not in English, the audio guide follows the visitors’ route with information about the exhibits in each room. The gardens and park are known for the outstanding display of peonies, with more than 1,000 plants blooming in May and June.

6. The Ruins of Aggstein Castle 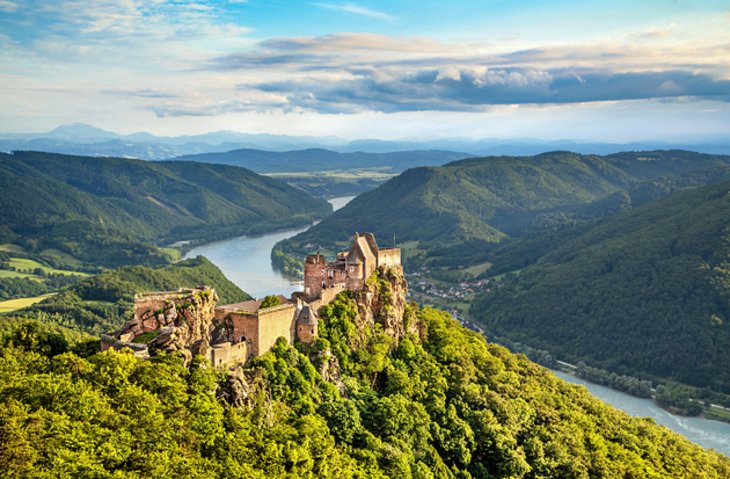 About 16 kilometers north along the Danube from Melk are the spectacular ruins of Aggstein Castle (Burgruine Aggstein). Standing more than 300 meters above the river on a steep-sided crag, the castle offers magnificent views of the Wachau Valley.

The castle was founded in 1231 and several times destroyed (and rebuilt). Surviving sections include parts of its towers, kitchen, and dining hall, along with the chapel and its mighty walls. The site is infamous as the place where the “robber barons,” known as the Kuenringer lived, using the site as a base from which to attack and plunder ships and wagons as they passed through the valley below.

Opposite the ruins of Burg Aggstein, on the left bank of the Danube, is the village of Willendorf. Here, you can see the famous Venus of Willendorf, a Paleolithic image of a female figure, that was found in 1909. 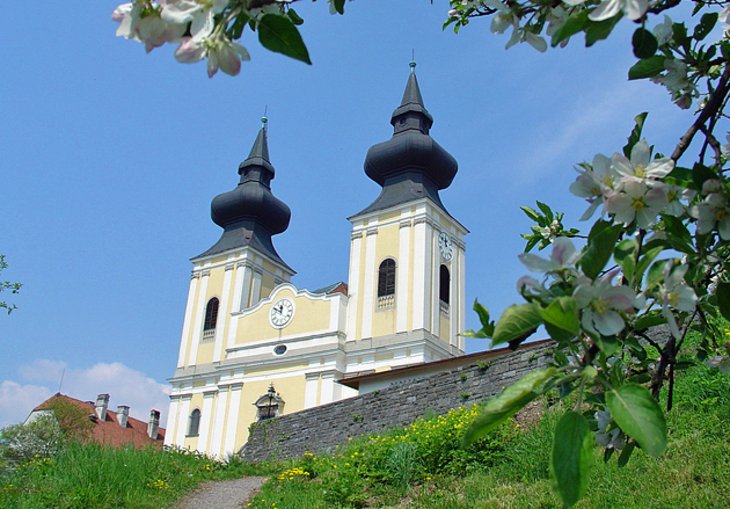 In the village of Maria Taferl, high above the Danube and offering fine views of the Danube Valley, stands a handsome Early Baroque pilgrimage church. The Basilica of Maria Taferl is said to have been built on the site of an oak tree with a revered image of the Virgin, and the old twin-towered church – built between 1661 and 1711 – has long been a place of pilgrimage.

Notable features of the pilgrimage church are its marble doorway, its Baroque ceiling paintings, and other frescoes depicting scenes from the life of St. Joseph and the legend of the Virgin. The decorated pulpit, with its multitude of figures, and the organ, with its rich gold decoration, both from the 18th century, are notable highlights. So, too, is the high altar with its revered figure of the Madonna, and a pietà surrounded by a garland decorated with cherubs. 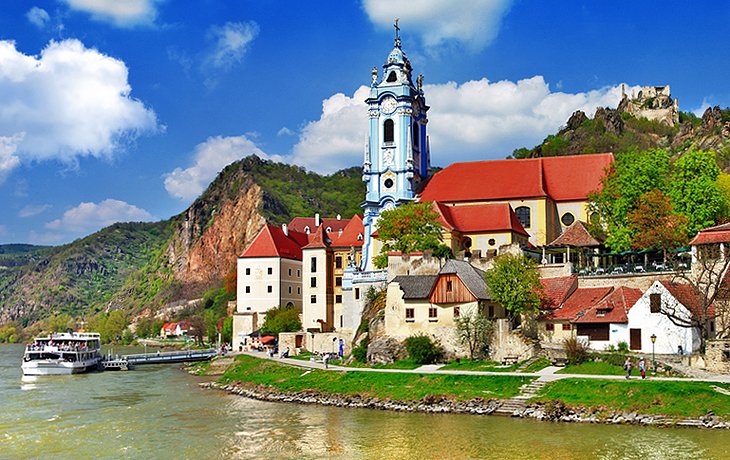 The Wachau Valley is the name given to the 30-kilometer stretch of the Danube between the towns of Melk and Krems. Here, the river cuts a narrow, rocky valley between the foothills of the Bohemian Forest and the Dunkelsteiner Wald.

Undoubtedly the most beautiful part of the Danube, the area is noted for its many ancient little towns (including picturesque Dürnstein) nestling below historic old castles and castle ruins.

At the time of the Renaissance, some 31 monasteries were known to have operated here, and as early as 1784, the valley was already becoming popular with travelers. Then, as now, the big draw was the stunning scenery and the many inns, known as Buschenschenken, set up by Emperor Joseph II.

A particularly pretty town is Maria Laach, famous for its richly decorated Pilgrimage Church with an image of the Virgin with Six Fingers from 1440. Also of interest are the Late Gothic winged-altar from 1490, and the tomb of Freiherr Georg von Kuefstein who died in 1603. 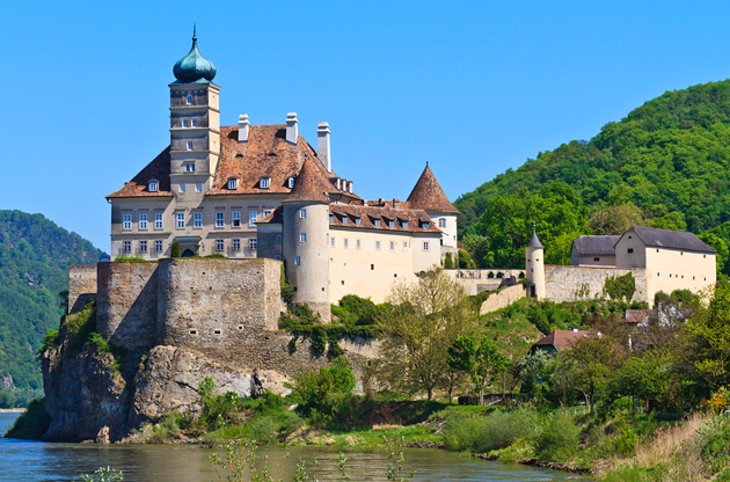 Just five kilometers below Melk on the right bank of the Danube, Schloss Schönbühel stands on a crag rearing high above the river. Built in the 12th century on the site of a former Roman fort, the castle has been remodeled several times and dates in its present form – incorporating the old walls – from the early 19th century.

Highlights of a visit include a relief of The Last Supper on the external wall, while nearby stands the Rosalien Chapel and a convent built in 1674. At the foot of the Schloss lies the market town of Schönbühel, well worth exploring given its position overlooking the Danube. 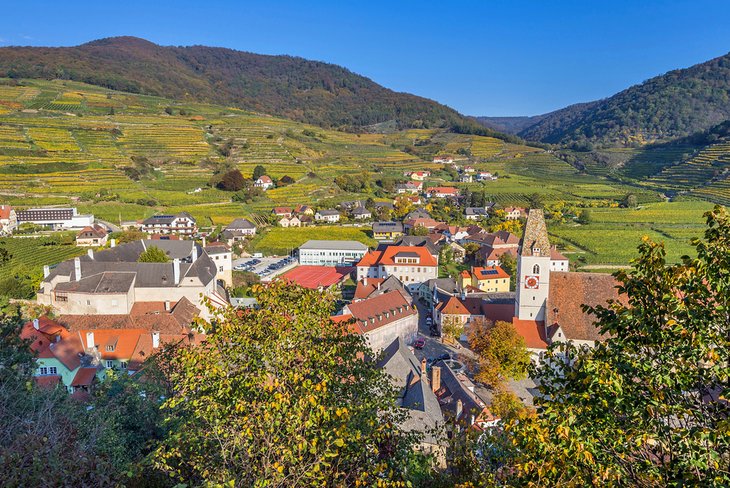 About 18 kilometers north of Melk is the enchanting town of Spitz. Located on the left bank of the Danube, this old market village has been occupied since the time of the Celts and was first mentioned in AD 830. It has been fortunate in retaining many of its beautiful Renaissance and Baroque houses, a fact that adds to the charm of its quaint streets.

Spitz is also famous for the vine-clad hill rising above it, known as the Tausendeimerberg. Another sightseeing landmark is the Late Gothic church of St. Maurice, with its fine group of Apostles from 1380 and an altarpiece by Kremser Schmidt on the high altar.

Other highlights to explore are the nearby ruins of Hinterhaus Castle, and the Teufelsmauer – the Devil’s Wall – a curious spur of rock that projects into the river on the left bank. 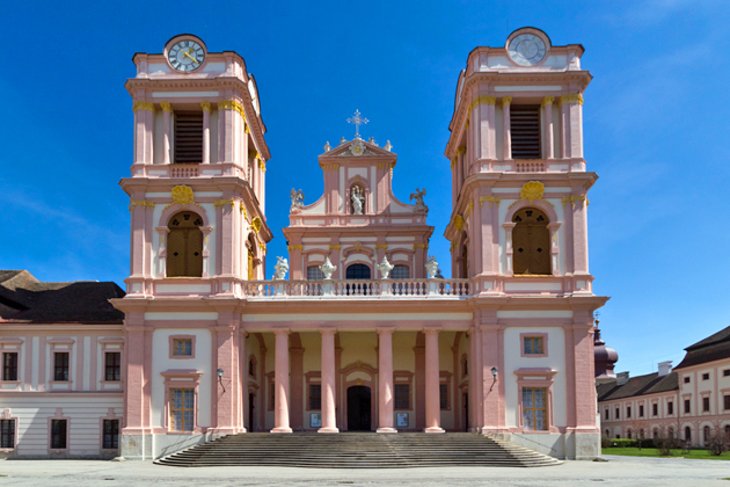 South of the picturesque town of Krems and 40 kilometers northeast of Melk is the magnificent Göttweig Abbey. Perched prominently on a wooded hill 269 meters above the Danube, this former Benedictine abbey – now a UNESCO World Heritage Site – was founded in 1704 by Bishop Altmann of Passau.

The present buildings were begun in 1719, and work continued until 1783, leaving the plan unfinished. The parts completed were the east and north fronts with the Kaiserstiege, one of the finest staircases of the Baroque period, and its superb ceiling painting from 1739 depicting the transfiguration of Emperor Charles VI. The

Abbey church also impresses, particularly its imposing Baroque façade with twin towers and a spectacular entrance. Interior highlights include the Baroque decorations and furnishings, stained glass, and the choir stalls with their intricate inlaid work.

Other highlights include the convent buildings north of the abbey church, in particular the Altmann Room with its superb Grand Hall, as well as its ceiling frescoes and paintings. The four Imperial Apartments are worth seeing, too, and include the Napoleon Room and the Cecilia Room with paintings by Andreas Altomonte and Kremser Schmidt.

Top 6 Best Cultural Highlights & Things to Do in Austria + Tips