Melding a lively character with a cherished seafaring tradition, Lagos basks in its reputation as one of southern Portugal’s favorite holiday destinations. In the western Algarve, about 90 kilometers from the regional capital Faro, this attractive resort town is celebrated for its scenic coastline of beautiful beaches and stunning natural rock formations.

The town has a young, cheerful vibe and a wealth of historic attractions and fun things to do, with facilities that include a modern marina, nearby zoo, and even a science center for kids. By navigating Lagos’ old town visitors can also savor the hospitality of some excellent cafés and restaurants. Alternatively, amble the waterfront promenade or indulge in a sightseeing cruise and explore the fantastic sea caves and grottoes that have placed Lagos well and truly on the Algarve tourism map.

For more ideas on the best places to visit, read our list of the top attractions in Lagos. 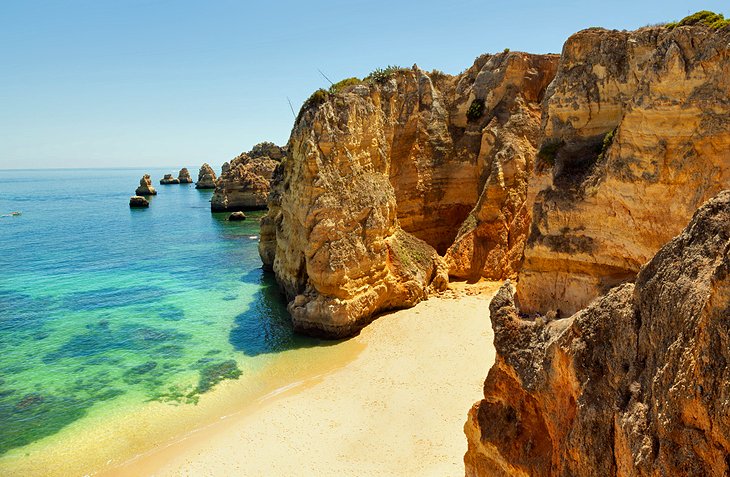 Some of the Algarve’s most celebrated beaches are located in the Lagos vicinity, with two easily reached on foot.

Two kilometers southwest of the town center, Praia do Camilo is the postcard favorite. Framed by outcrops of fantastic rock formations, this sheltered slither of sand is illuminated in spring by a mantle of colorful flowers that cling to the cliff edge above. Arrive early during the summer to bag a spot, and note that by late afternoon, the beach is cast in shadow as the sun starts to dip behind the promontory.

The vast Meia Praia starts its run behind the marina and stretches four kilometers to the east. Its name in English means “Half Beach” – a curious moniker given that this is the longest beach in the region. For sun-seekers, however, this translates as more sand, and there’s ample space to relax and bronze up. It’s an exposed beach, though, and popular with water sports enthusiasts. A number of restaurants line the dunes and a regular bus service from Avenida dos Descobrimentos serves its entire length.

Out of town lies Porto de Mós. A fabulous coastal footpath leading from the Ponta da Piedade lighthouse will take walkers to this lovely beach, but allow an hour to hike the trail. 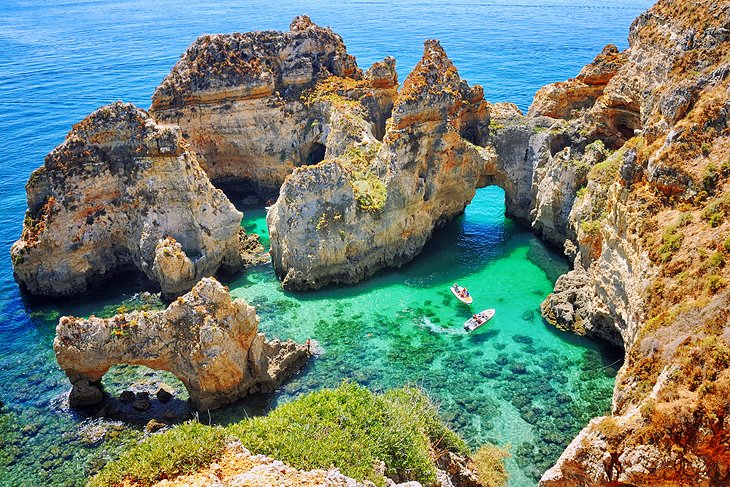 One of the most recognized natural landmarks in Portugal, the mournfully named “Point of Pity” is a scenic headland that juts out into the sea on the western edge of Lagos Bay. The dramatic sandstone cliffs appear burnished with gold, such is the vivid brilliance of their burnt ochre hue.

Rising out of the transparent waters below are huge rock formations, some arched and contorted as if melted by the sun. Out of sight, tucked under the cliff face, is a series of caves and grottoes, their bellies carved out by restless Atlantic swells. These hidden caverns can be explored by boat on a fun-packed Ponta da Piedade grotto sightseeing cruise from Lagos, or an equally rewarding kayak tour.

Back on terra firma meanwhile, sightseers can follow footpaths that snake around the headland to reach a number of viewpoints with dizzying views over the gnarled stacks and craggy pillars – a bizarre and beautiful seascape.

For a romantic end of day finale, gather by the lighthouse that crowns the promontory and wait for the sun to set over the western Algarve coast.

3. Kayak Tours along the Coast 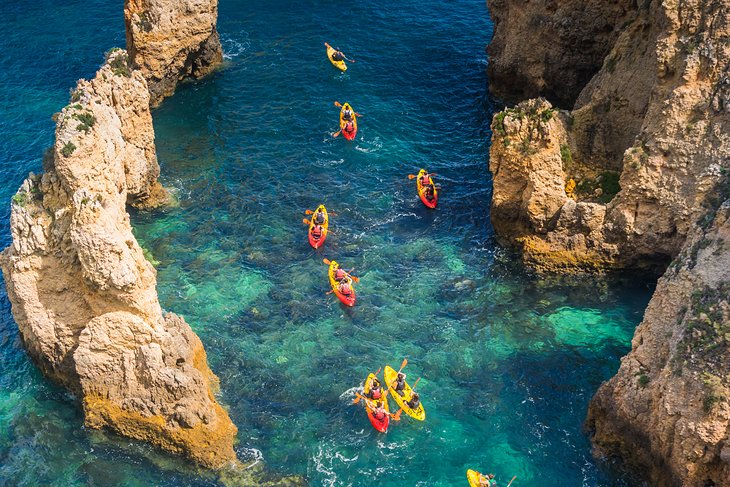 Kayak Tours along the Coast

The coastline west out of Lagos is straight out of a pirate adventure picture book. The scenic, honeycombed cliffs; weird chimneystack rock formations; and the dozens of hidden sea caves and ancient grottos at Ponte da Piedade make for exhilarating exploration and are tourist attractions in themselves.

One of the most exciting ways of charting a course along this incredible seascape is by joining a guided kayak and snorkel trip excursion. Paddle out over warm turquoise shallows for fisheye-views of this wonderfully evocative environment. Later, plunge into the Atlantic’s alluring waters and marvel at the undersea world alive beneath you. Between forays, kayakers have the chance to soak up the sun on a deserted beach. 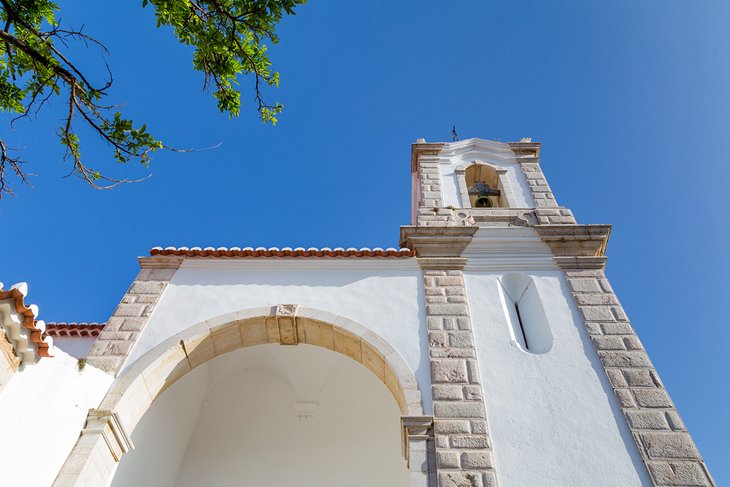 One of the Algarve’s most inspiring cultural combinations is the coupling of Lagos’ church of St. Anthony with the town’s municipal museum. Together they represent one of the most rewarding sightseeing experiences in the region.

Visitors first enter the museum – an ethnographic miscellany of oddities, rarities, and curios. Artifacts on permanent display include a beautiful mini altarpiece, whittled from cork, and a collection of priest’s vestments, one dating from 1578. A magnificent near-complete Roman mosaic is startling in its centuries-old detail.

Visitors can spend an hour or so absorbing this fascinating exhibition, going backwards and forwards through each gallery before entering the adjacent 18th-century church to gaze upon one of the most dazzling interiors of any religious site in the Algarve. The Baroque rhapsody of ornate gilded wood carvings and decorative tiles is impressive and a suitably ebullient way to end the tour.

A radical activity attraction for all the family, the Lagos Adventure Park is all about following high ropes courses set at different heights and at various degrees of difficulty through a canopy of swaying, lofty trees.

Testing nerves and physical ability, daredevil patrons have to surmount a number of challenges along the way, such as traversing bridges, navigating rope nets, and riding giant ziplines. The ropes courses are set at three levels of complexity: Curious, Adventurous, or Fearless.

There’s no need for any limbering up, just the will to overcome each obstacle. Fun lovers’ safety is guaranteed under the watchful eye of highly qualified personnel, leaving you free to complete each circuit under your own steam. Afterwards, the sense of accomplishment will be palpable. 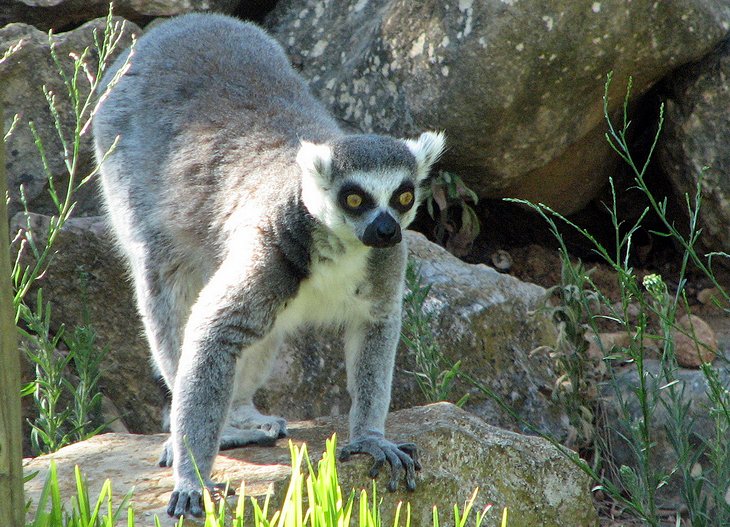 Rubber-limbed gibbons, marble-eyed lemurs, and fur ball marmosets are just some of the animals waiting to greet visitors at Lagos Zoo. Joining the primates in this semitropical park, approximately eight kilometers north of Lagos, are other residents, like the sleek bobcat, and rare species such as Indian muntjac deer. Heading up the entertainment is a troupe of cheeky meerkats.

The variety of birdlife is impressive, and the colorful and exotic flocks include channel-billed toucans, rainbow lorikeets, and the wonderfully named chattering lory. Owls and assorted waterfowl can also be admired.

In addition, the zoo’s countryside setting is an ideal showcase for its farm stock: animals like sheep, goats, and horses.

Near the “monkey lake” is a picnic area, where visitors can observe the primates’ antics while enjoying an alfresco lunch. There’s also a rustically-styled on-site restaurant. A playground for toddlers makes sure the entire family remains amused at this cheerful and engaging facility. 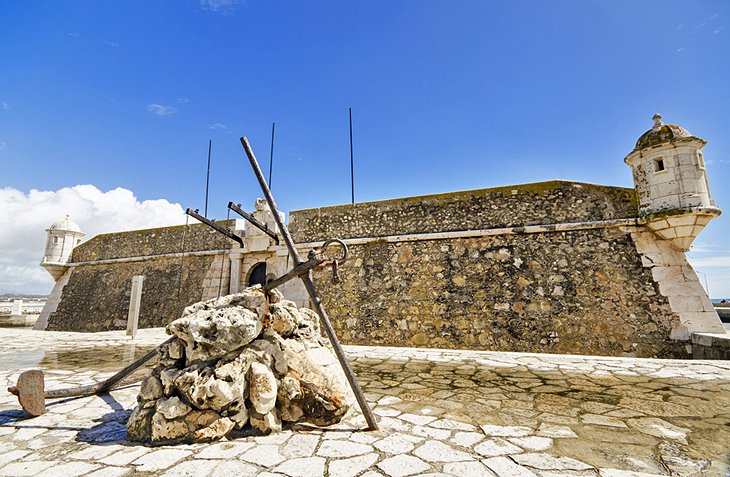 Built in the 17th century to defend the approaches to Lagos harbor, this square-shaped, pocket-sized fortress remains in remarkably good condition considering its age.

Situated over a wedge of sand overlooking a shallow bay, four turrets shaped like spinning tops set at each corner help distinguish the fort’s squat profile. A narrow moat lends the stronghold an impregnable quality, and sightseers have to cross a drawbridge to reach the inner courtyard.

The visitor experience is limited to a small 18th-century chapel lined with pretty azulejos tiles, and exhibition space dedicated to Portugal’s era of discoveries. From the ramparts however, visitors can enjoy uninterrupted views over the water and back across the avenue towards the castle walls and fortifications that uphold the medieval character of the vicinity. 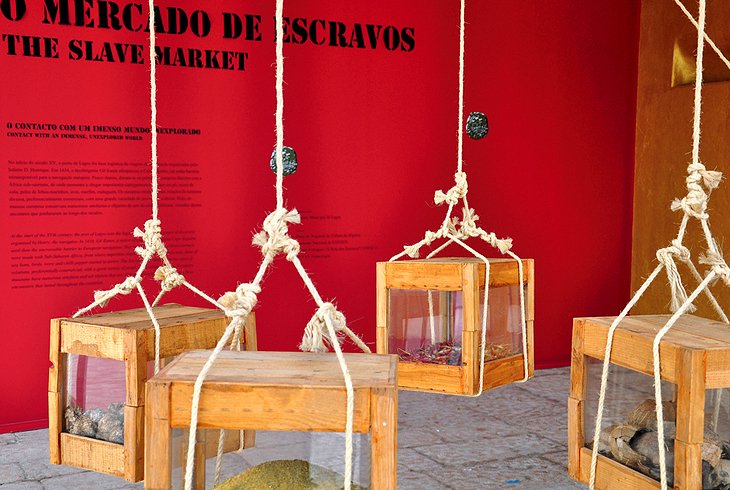 The Slave Market in Lagos marks a less salubrious chapter in the town’s history, and represents a darker side to Portugal’s otherwise golden Age of Discovery. On this site in 1444, Europe’s first slave market opened, selling slaves that were captured and transported from Africa. The arcaded building seen today dates from 1691 and served as a customs office.

Abandoned for many years, the small gallery now hosts a permanent exhibition charting Portugal’s shameful trade in human cargo, and the role Lagos played in its proliferation. Displays include confiscated personal possessions and a skeleton of one of the hapless individuals, unearthed nearby. The exhibition is limited in scope but nonetheless sobering and rather moving – and the authorities have classified the building as a Monument of Public Interest.

The theme of this engrossing Live Science exhibition and cultural center is “The Portuguese Maritime Discoveries,” and it provides a fun-filled and educational way of keeping children happy and entertained, especially if the weather is overcast and the beach is out of the question.

Portugal’s seafaring heritage is brought to life by a series of games, puzzles, and interactive modules that bridges the gap between the discoveries of past and present, and youngsters are invited to embark on their own voyage of discovery. They can help crew a 15th-century caravel, or don an eye patch and join a pirate ship. Meanwhile, the submarine takes everybody to new depths of exploration.

The center is situated on the top floor of Lagos market, so naturally there’s a lighthouse to visit, and kids can have great fun learning how to use semaphore flags to send signals. All the time they are finding out more about navigation, communication, and life on board various seagoing vessels. The concept is simple but hugely enjoyable, and a team of enthusiastic multilingual staff is at hand to offer advice and answer questions. 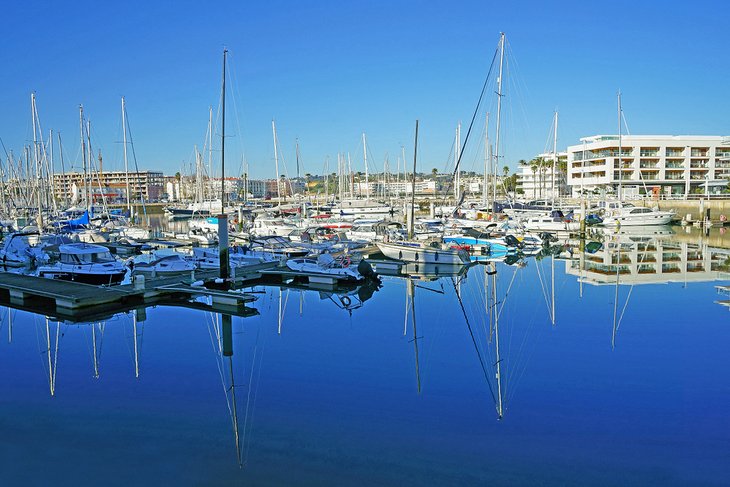 Yachts and motorboats of all shapes and sizes tie up at this first-class mooring facility, but Lagos Marina provides far more than just a safe haven for visiting watercraft. Anchored along the boardwalk are several very good eateries where customers can relax and soak in the seaside atmosphere. At night, some of these cafés host live music performances.

Numerous coastal cruise companies are based here, offering anything from exhilarating sightseeing excursions to the rock stacks, sea caves, and grottoes around Ponta da Piedade to fantastic dolphin “seafaris” that head out into the bay.

A swing bridge connects the marina with Avenida dos Descobrimentos, the town’s main avenue. The 462-berth yacht basin is also within walking distance of the sweeping Meia Praia beach. 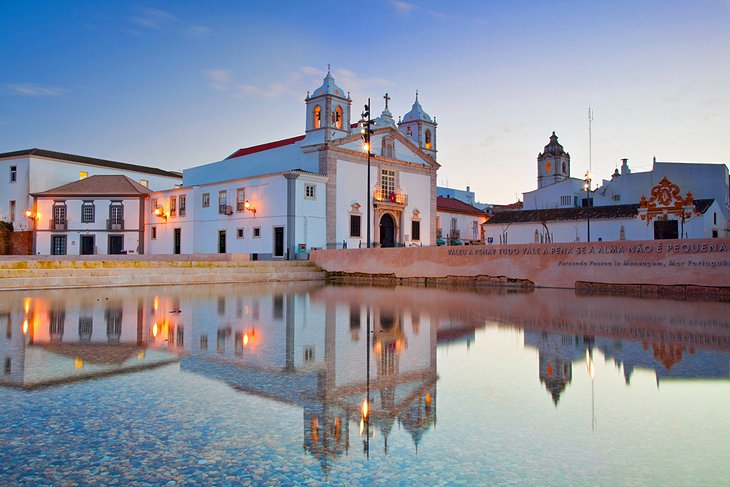 Lending dynamic perspective to Praça do Infante D. Henrique is the late 15th-century church of St. Mary. Set in the northwestern corner of the square, the church still retains a Renaissance doorway, which fortunately survived the great earthquake of 1755.

The building was renovated during the latter half of the 16th century and considerably expanded in the 18th century, so what visitors see today is an interesting amalgamation of architectural styles.

Of note inside is a statue of São Gonçalo of Lagos, a fisherman’s son born in 1360 who became an Augustinian saint. The square, embellished with water features, is named after Prince Henry the Navigator, who laid the foundations for Portugal’s maritime expansion in the 15th century and became governor of the Algarve. He sits, cast in bronze, on a plinth in the middle of the concourse.

This is a wonderful area to relax in such noble company, but it’s worth strolling across to the Castelo dos Governadores to admire the beautiful Manueline window set in the façade.

7 dishes that prove no one does seafood like Portugal