Stephanie Launiu is a Native Hawaiian lifestyle and cultural writer. She has a degree in Hawaiian Pacific Studies. She lives in Hilo.

Many merely think of Hawai’i as the 50th state of the United States—a place where the weather is sunny all year long and there are hula dancers, beaches, luaus, surfers, and a TV show called Hawaii 5-0. However, there’s so much more to this land than what is depicted in pop culture.

This article will go far beyond what you thought you knew about Hawai’i. Read on to discover more about the relationship between the U.S., Hawai’i, and its native people. It’s a complicated one that a majority of people have not learned about.

1. Native Hawaiians Are a Race of People

Native Hawaiians, also known as Kanaka Maoli, are the indigenous or aboriginal people (and their descendants) of the Hawaiian islands. Their ancestors were the original Polynesians who sailed to Hawai’i and settled the islands around the 5th century AD.

“Native Hawaiian” is a racial classification used by the United States. In the 2010 Census, 527,077 people reported that they were Native Hawaiian or of a mixed-race that includes Native Hawaiian. There may now be as few as 8,000 pure-blood Native Hawaiians remaining in the world.

Hawaiians are not named for the state (think Californians, New Yorkers, Texans, etc). Unlike these other states, Hawai’i is named after its native people. Living in Hawai’i doesn’t make you Hawaiian, it makes you a resident of Hawai’i. 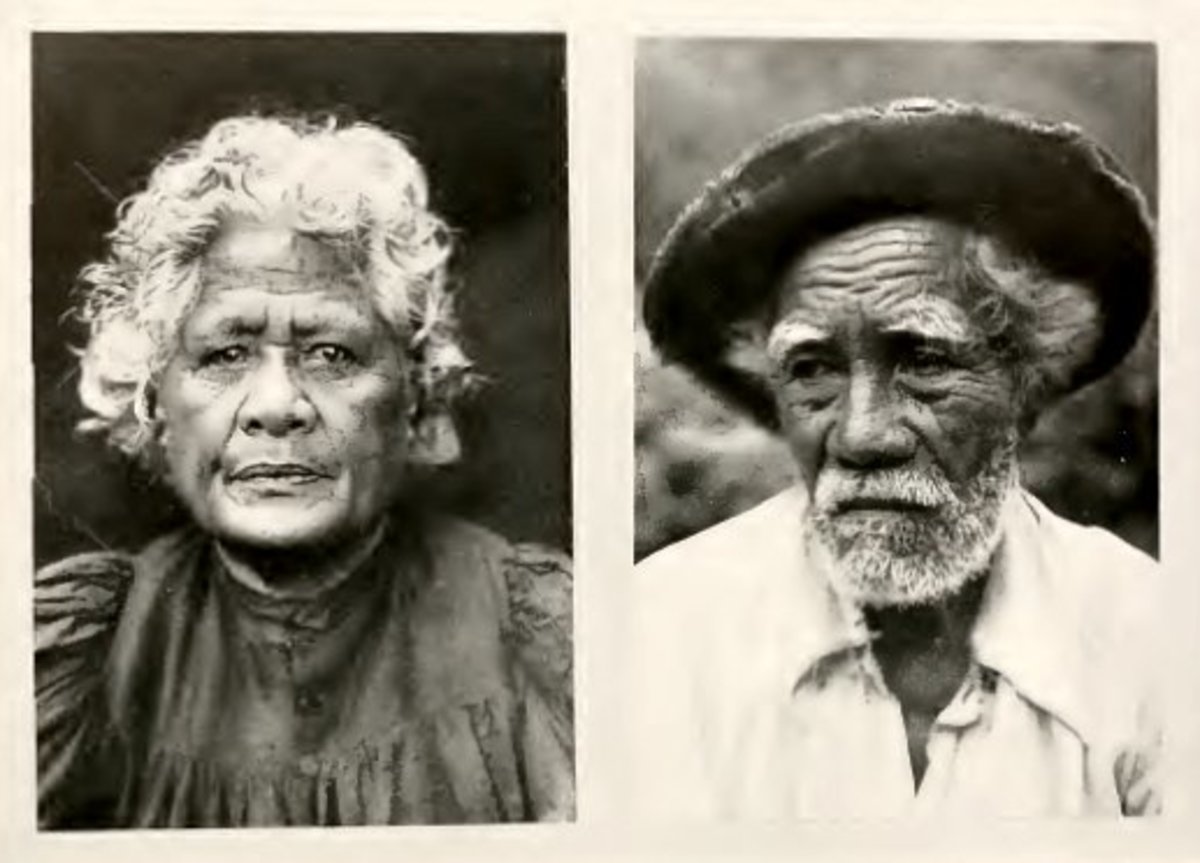 The first recorded western contact with Hawai’i was in 1778 when Captain James Cook, an English explorer, sailed on the HMS Resolution into Waimea Bay on Kaua’i. The next year he sailed into Kealakekua Bay in Kona on the Big Island of Hawai’i. It is estimated that between 400,000 and as many as one million Native Hawaiians were living on the major Hawaiian islands when Cook landed in Hawai’i.

Because Hawai’i is a group of islands isolated from other landmasses and people, diseases that afflicted the rest of the world were not known in Hawai’i. Within a century after Cook first landed, however, the Native Hawaiian population had been decimated, dropping down to about 40,000. Deaths were attributed to a number of “new” diseases including smallpox, measles, influenza, sexually-transmitted diseases, whooping cough, and the common cold. 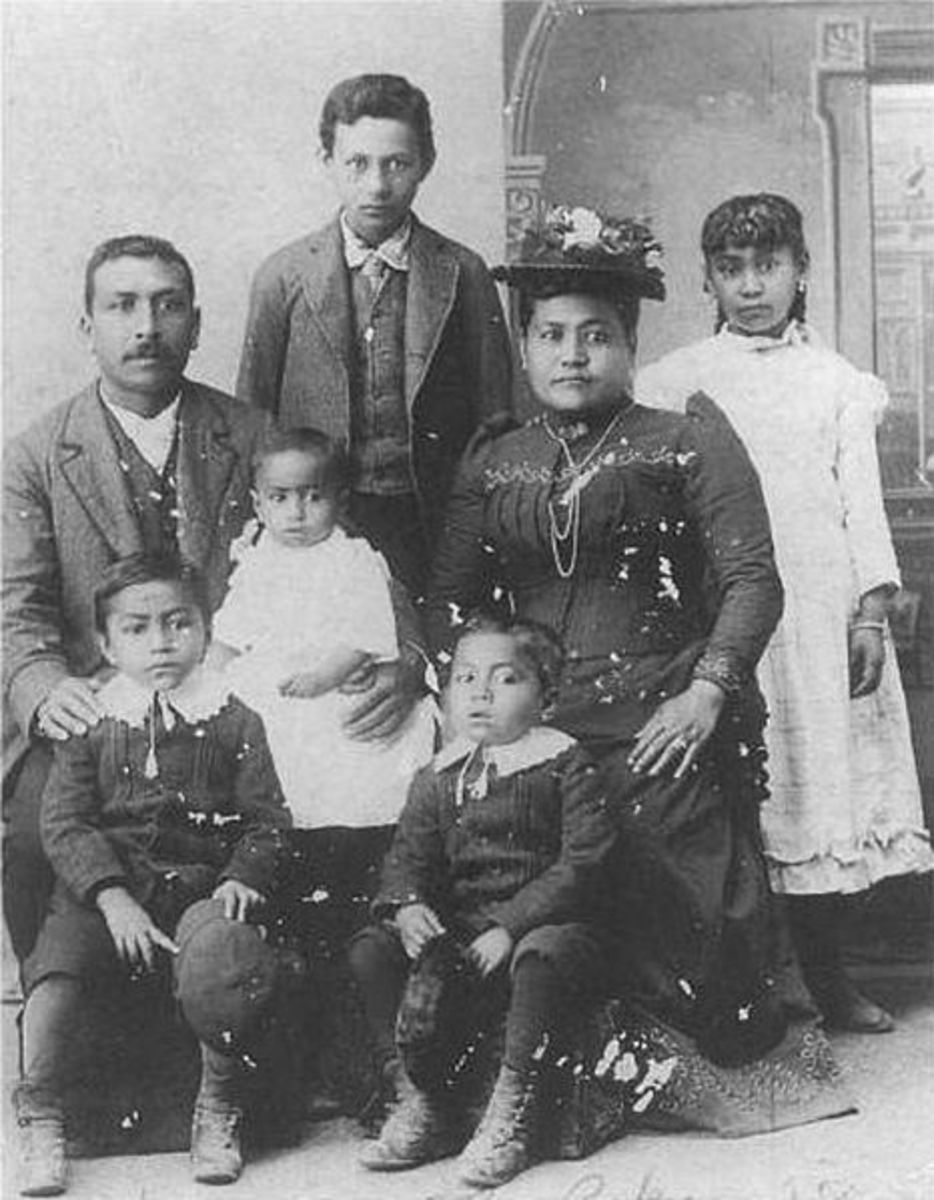 3. Hawai’i was an Independent and Sovereign Nation

The Kingdom of Hawai’i was an internationally-recognized monarchy that entered into bilateral treaties of trade and friendship with other countries including: 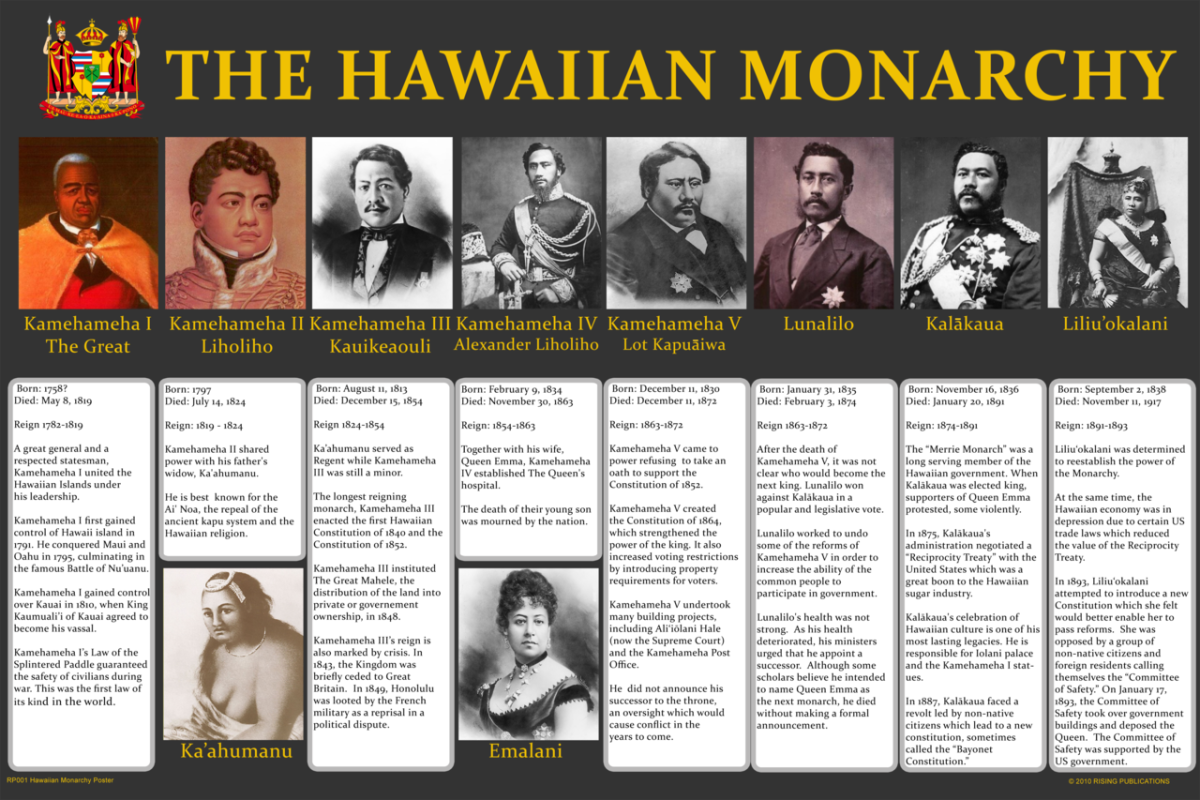 The first Christian missionaries came to Hawai’i in 1820. Soon after, Hawaiian children began attending school and learned to read and write in the Hawaiian language.

In 1869, a newspaper article reported that Hawai’i was the only government from the Pacific area to attend a Paris exposition. At the event, Hawai’i displayed newspapers, Bibles, textbooks, books of law, agricultural products, and other examples of “civilization.”

Meanwhile, European visitors to the Islands were reportedly astounded that in Hawai’i, the common man was taught the same sorts of things that only the European elite of the time was entitled to learn. 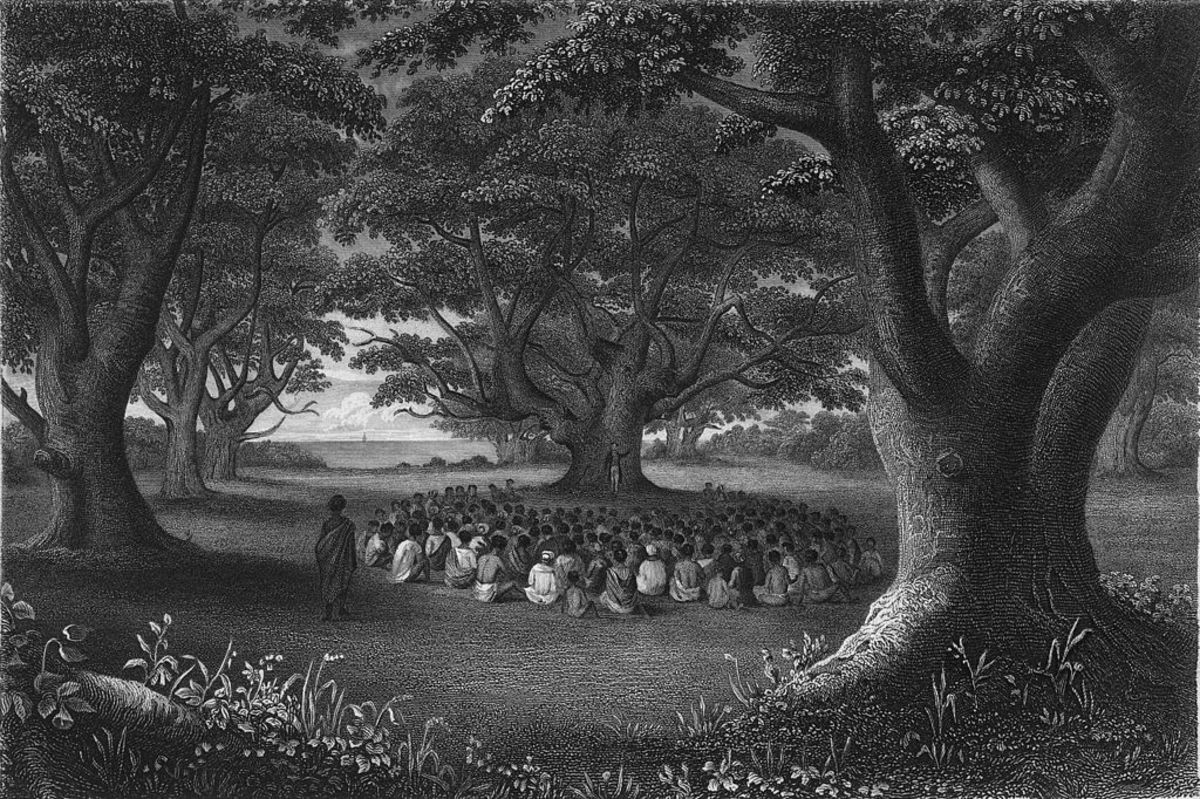 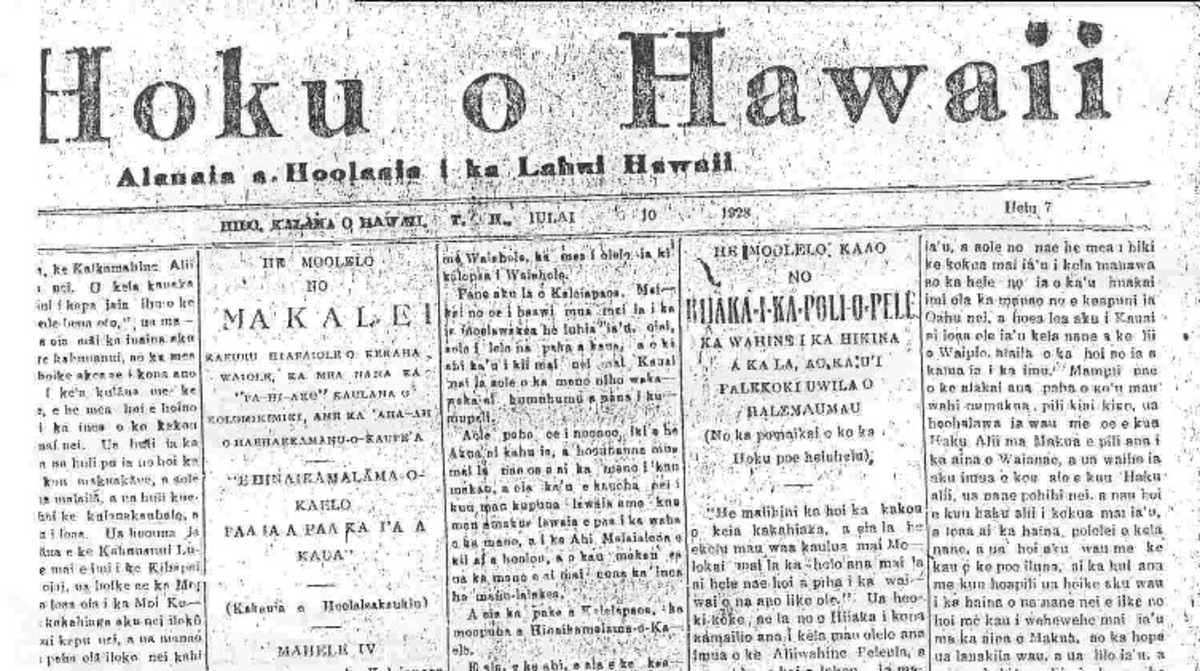 Hawaiian language newspapers were published in Hawai’i for over a century beginning in 1834 at Lahainaluna School on Maui. It is believed that the last newspaper in the Hawaiian language was Hoku O Hawai’i, which printed their last issue in 1948.

5. Hawai’i’s Government was Illegally Overthrown by the United States of America

On January 17, 1893, an illegal overthrow of Hawai’i’s government took place. U.S. Marines from the USS Boston, two companies of U.S. sailors, and U.S. Government Minister John L. Stevens landed at Honolulu Harbor and, along with U.S. and European businessmen, effectuated an illegal coup against Queen Lili’uokalani.

What were their motives? Greed, control over cheap land, and control over the sugar industry. The businessmen and sugar planters were led by Sanford Dole, who some refer to as a “sugar baron.” Sanford’s cousin, James Dole, sometimes called the “pineapple king,” began the pineapple industry in Hawaiʻi with his Hawaiian Pineapple Company. The Dole brand is undoubtedly familiar to you.

In the following years, Native Hawaiians were colonized and had to learn to live with their homeland being lost to the largest superpower in the world. This loss was accompanied by an endless influx of tourists and immigrants from other states and foreign countries. Additionally, Pearl Harbor was bombed during World War II because America used (and continues to use) Hawai’i for its Pacific fleet. 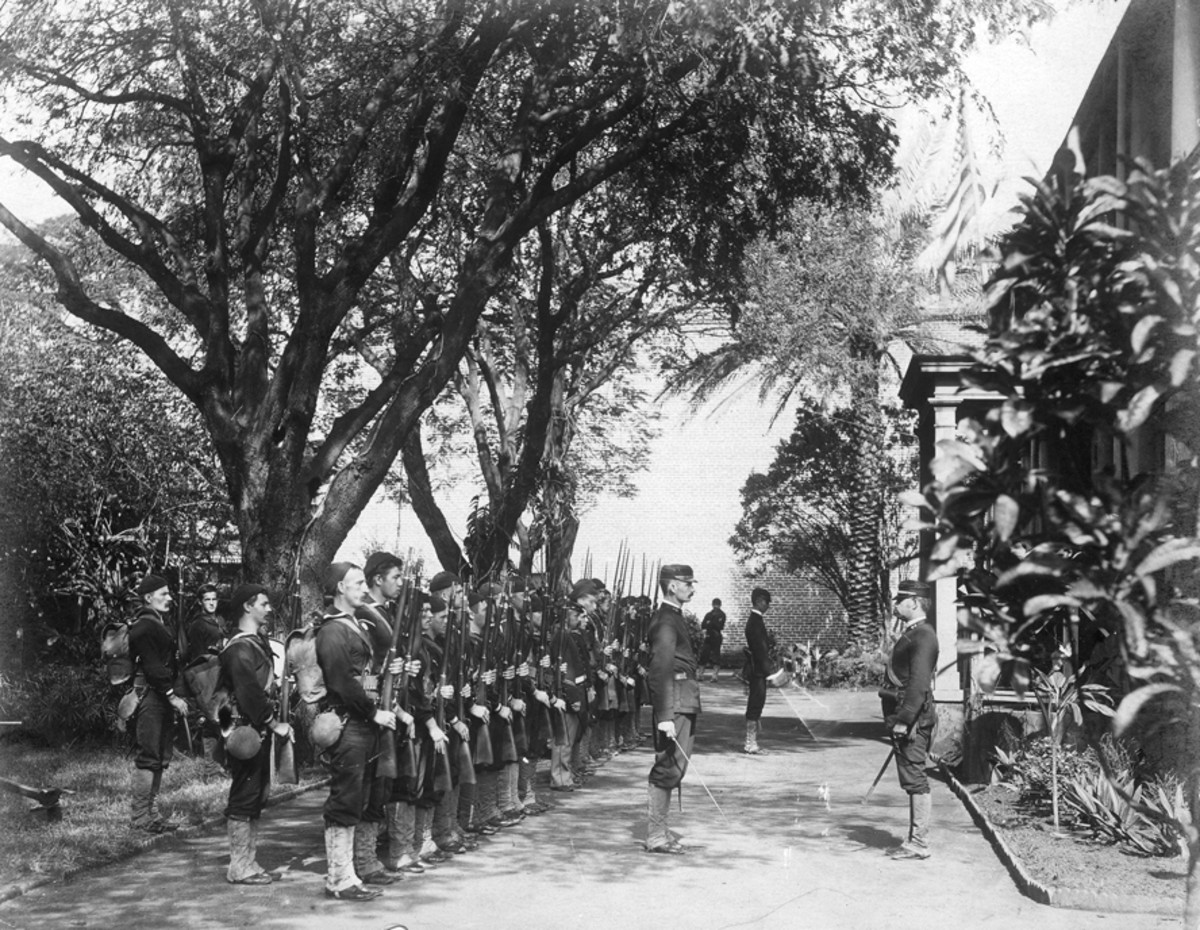 The USS Boston’s landing force on duty at the Arlington Hotel, Honolulu, at the time of the overthrow of the Hawaiian monarchy, January 1893.

6. The Hawaiian Language was Banned

Three years after the Hawaiian government was overthrown, a law was passed that made it illegal for school classes to be taught in anything but the English language. English replaced Hawaiian as the official language of government, business, and education.

So began the colonization of the Native Hawaiian people; children were punished in school for speaking Hawaiian, and those who spoke Hawaiian at home were ridiculed. This systematic suppression of Hawaiian culture and language took place for four generations, and the language was almost lost due to parents and grandparents who were uncomfortable passing the language on to younger generations.

It was not until a constitutional amendment passed in Hawai’i in 1978 (!) that it was once again legal to teach Hawaiian in the school system. Even still, Hawaiian wasn’t taught in public schools until 1987, when a Hawaiian Immersion Program began. At the time, it was estimated that fewer than 1% of the population could speak Hawaiian. Today, the percentage of Hawaiian speakers is approaching 6%, and the language is taught in public and private schools at all grade levels as well as in college.

The College of Hawaiian Language at the University of Hawai‘i at Hilo, Ka Haka ‘Ula O Ke‘elikōlani, was the first college in the United States administered and conducted entirely in an indigenous language. In 1999, Ka Haka ‘Ula began offering a Master’s degree that was followed in 2004 with a doctoral program in Hawaiian language. 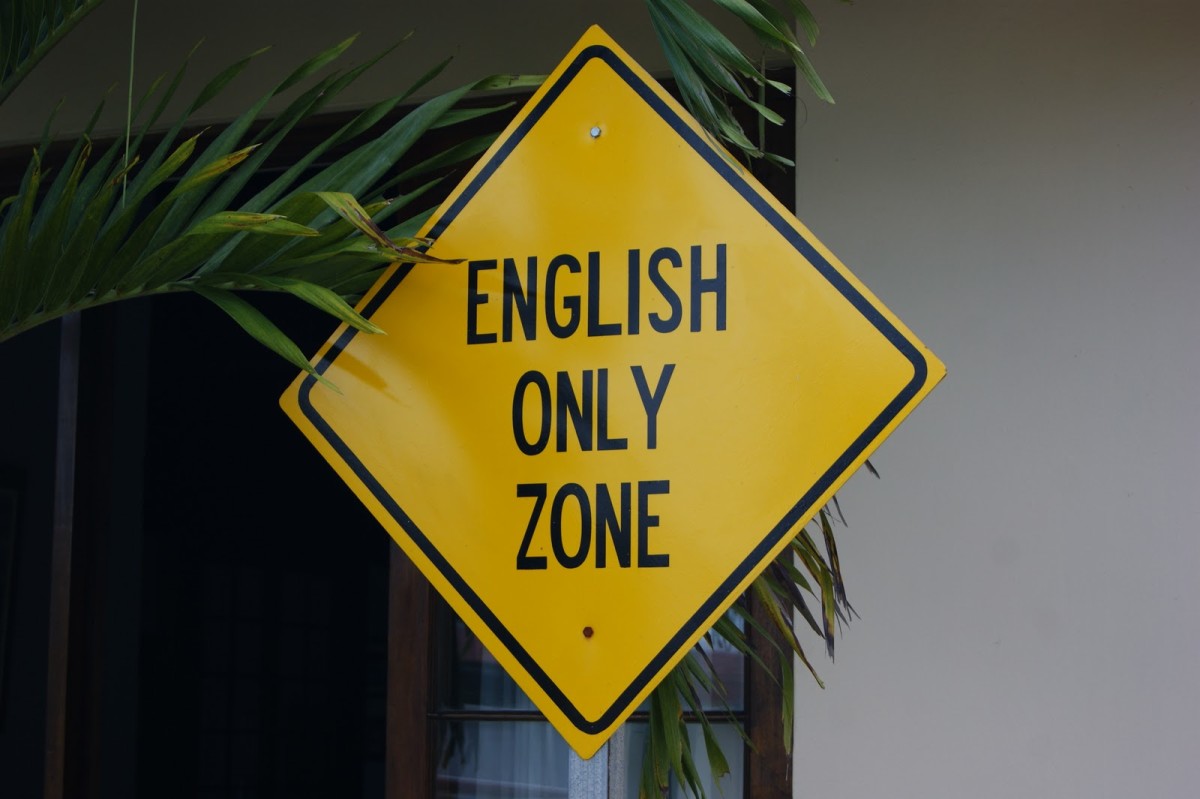 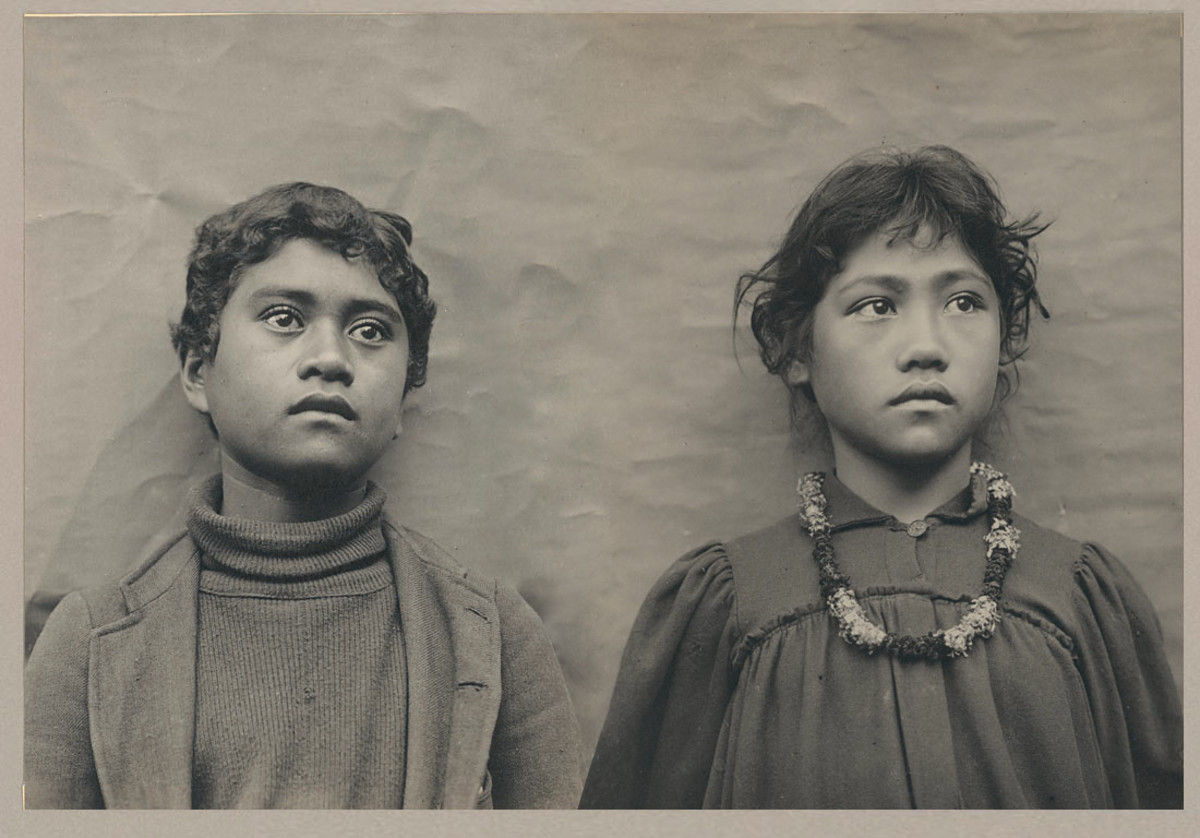 7. Native Hawaiians Tried to Fight Back

After the overthrow, Native Hawaiians tried to fight back through the U.S. legal system in the following ways:

In spite of the efforts of the Native Hawaiians and their Queen, Hawai’i was illegally annexed as a U.S. territory in 1898, along with 1.2 million acres of Hawaiian crown lands that had belonged to the monarchy and to the nation of Hawai’i. No compensation was paid to anyone.

Ironically, the only person who saw any jail time from the overthrow was Queen Lili’uokalani. In 1895, a clandestine group of supporters of the monarchy attempted an unsuccessful counter-rebellion against the government led by Sanford Dole. There was no bloodshed, but weapons were discovered on the grounds of the royal palace, and Lili’uokalani was found guilty of treason against the government that had illegally overthrown her. Although she was sentenced to five years of hard labor, she only served nine months of house arrest.

During this time of incarceration, she wrote several songs, but “Aloha ʻOe” (“Farewell to Thee”) is her most famous composition. Lili’uokalani originally wrote “Aloha ʻOe” in 1878 as a love song, but it is now commonly sung as a farewell song.

The territorial government eventually voted to give her an annual pension of $4,000, though the United States never compensated her for personal lands that were taken.

Lili’uokalani died in 1917 at the age of 79. In her will, she ordered that all of her belongings be sold with the proceeds going to the Queen Lili’uokalani Children’s Trust for orphaned and indigent Hawaiian children. Her trust still operates today. A statue of Queen Lili’uokalani was erected on the grounds of the Hawai’i state capitol. 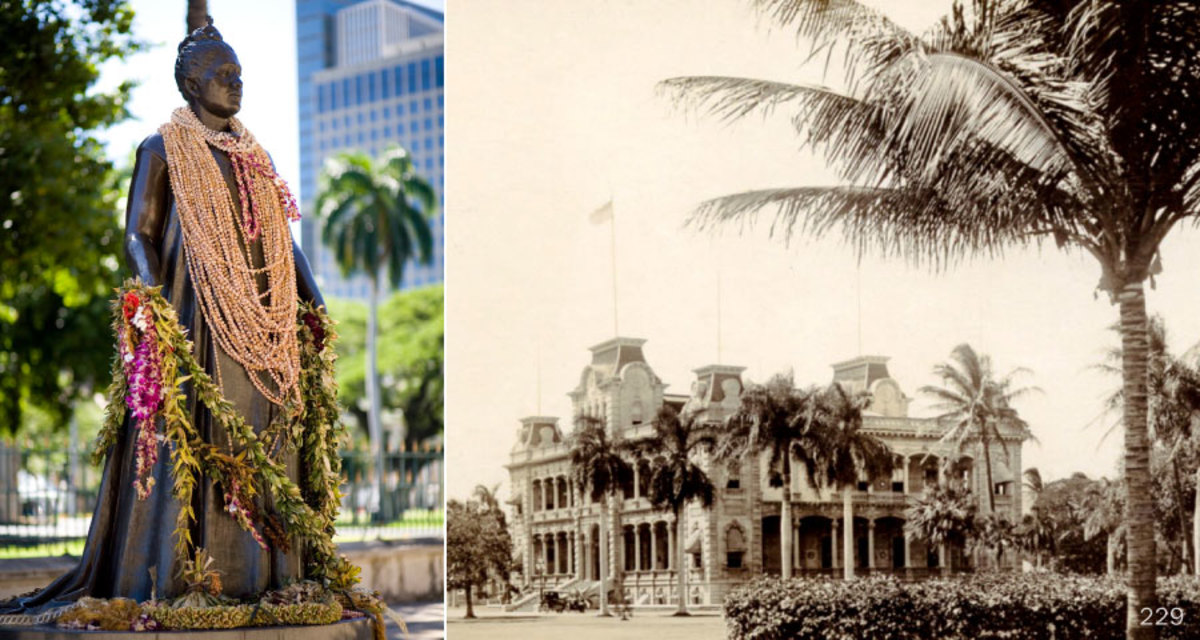 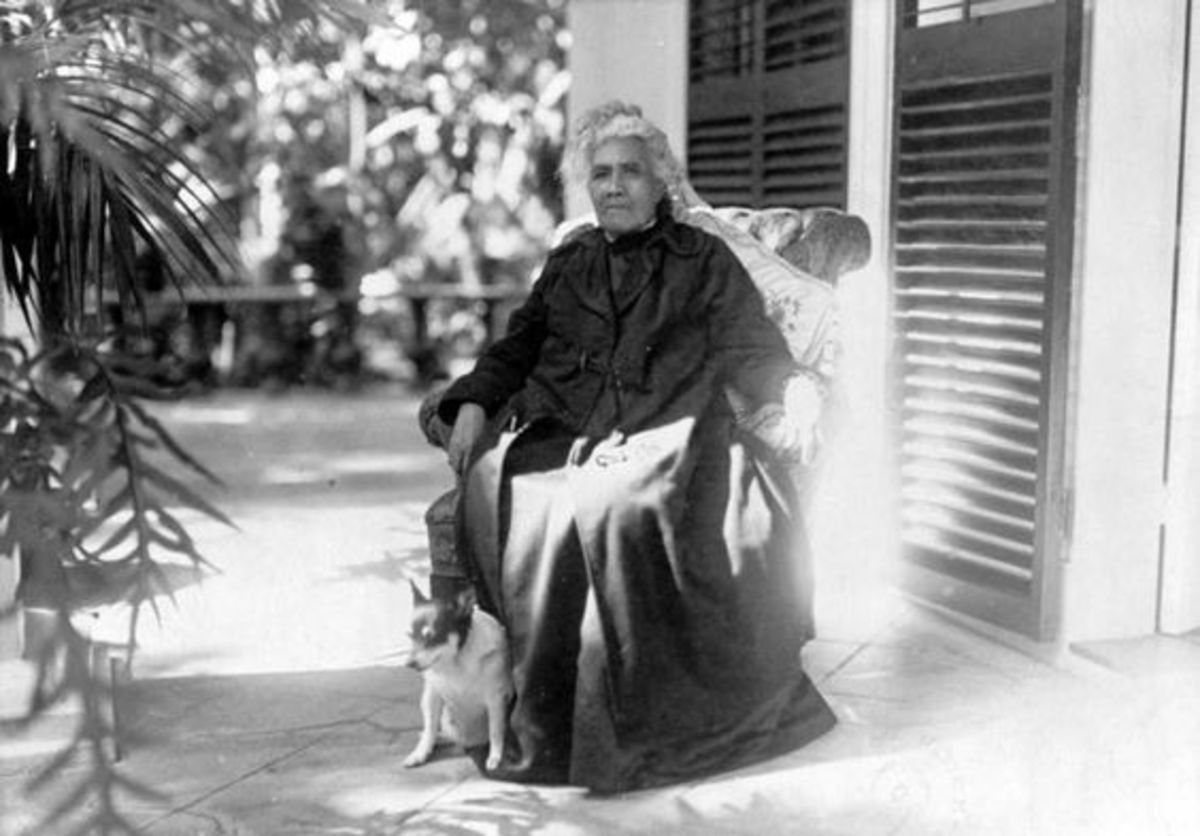 9. The U.S. Officially Apologized for the Illegal Overthrow

In 1993, President Bill Clinton signed an official apology to Native Hawaiians for the illegal overthrow of their nation. Public Law 103-150 was passed by a joint resolution of Congress in 1993 to acknowledge the 100th anniversary of the overthrow. Stipulations in the law stated that:

10. Native Hawaiians Are Revitalizing Their Language and Culture

Although they make up about 21% of Hawai’i’s population according to the 2010 U.S. Census, Native Hawaiians continue to work towards finding their rightful place in modern-day Hawai’i and regaining self-governance in some form. This includes rightful compensation for the illegal overthrow and a nation loss.

Here are some milestones and examples of their efforts: 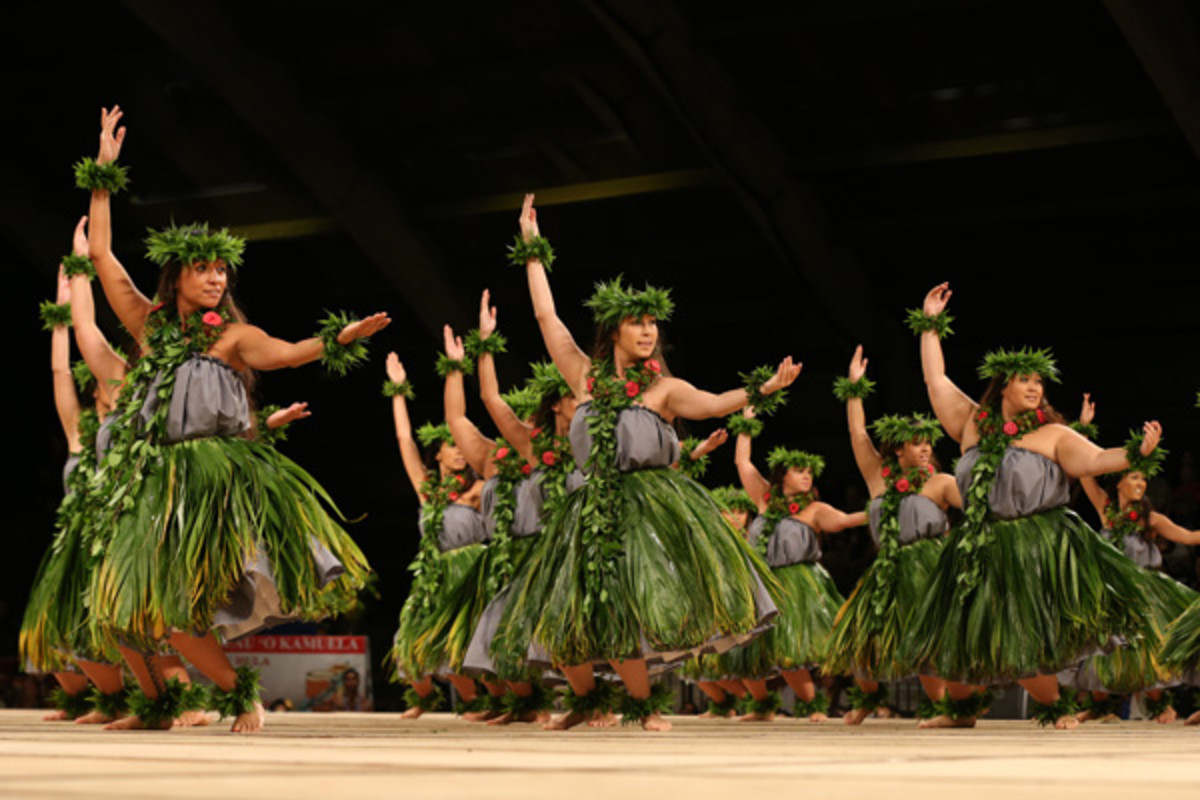 In today’s Hawai’i, the turbulence of a people who love their nation is palpable. Opinion and fact sometimes collide, and the menace of generational colonialism continues to penetrate the hearts and minds of many. This turbulence is a natural reaction to more than a century of frustration with America’s apparent disregard for native rights.

There are ongoing efforts to restore Hawai’i to its rightful place in the global community of nations. If you would like to learn more about Native Hawaiians, along with the sovereignty and de-occupy movements in Hawai’i, below are a few links to explore.

You have been forewarned: Everything you thought you knew about Hawai’i will be challenged. It is far more than sun and surf.

The Best Authentic Luaus To Experience In Hawaii