‘European Capital of Culture’ in 2003 and ‘City of Design’ in 2009, Graz is Austria’s second-largest city. It is one of the best-preserved historical areas in Europe, and filled with grand institutions and exciting new attractions. We list the 1o best things to see in this fascinating city. 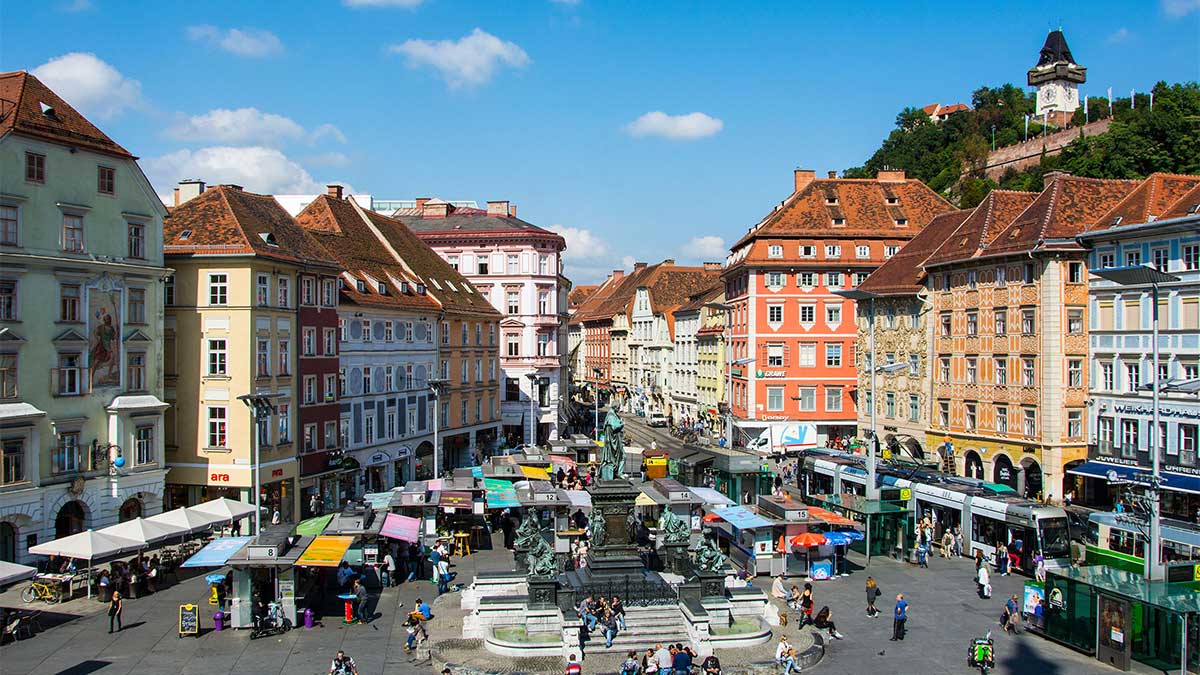 A UNESCO World Heritage Sight, Alstadt von Graz (Old Town) is immediately striking for its well-preserved medieval and Italian Renaissance buildings. Hauptplatz is the main square, flanked by the stunning Rathaus (town hall). During the holidays, don’t miss the local Christmas markets. Walk along Herrengasse to see the store windows, and turn down any of the small alleys to discover a charming café or interesting independent boutique. 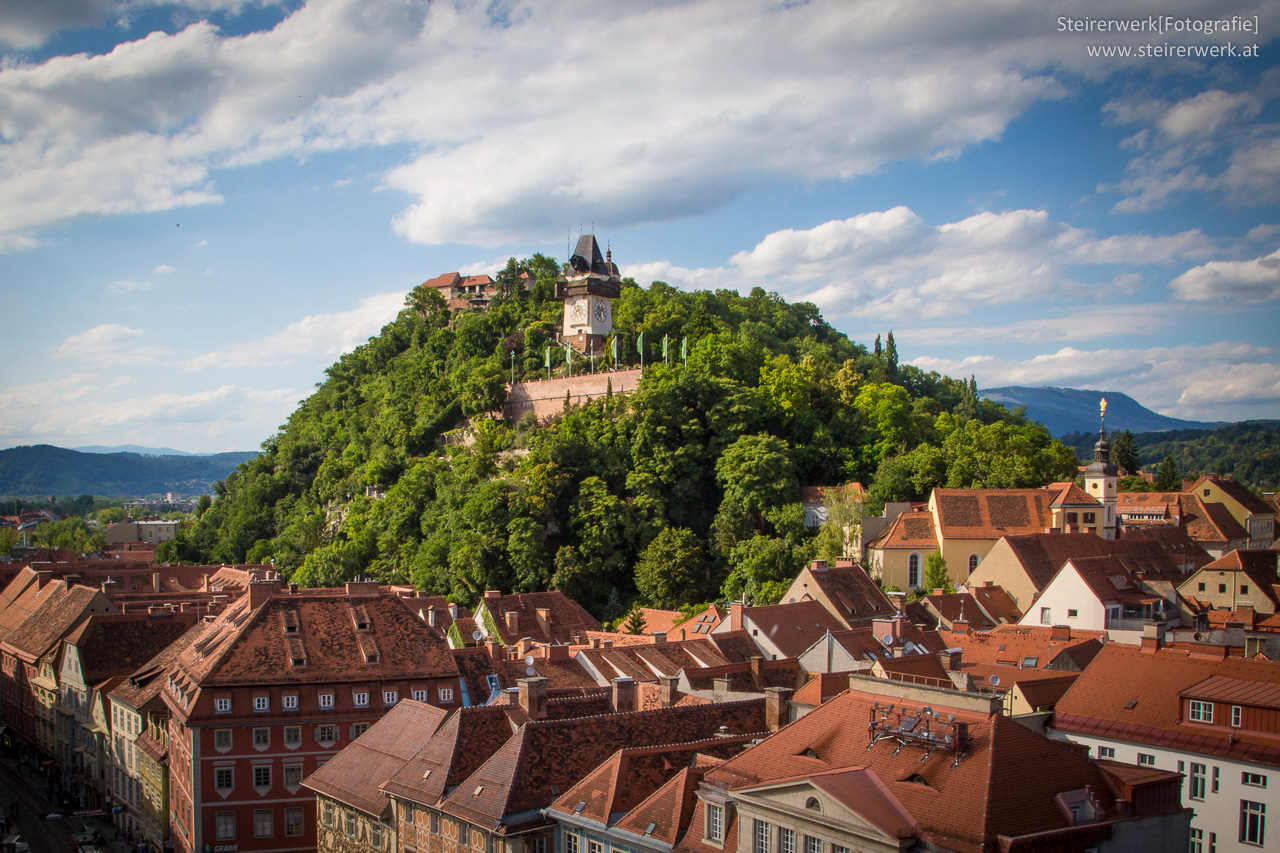 Literally translated to ‘castle-mountain,’ Schlossberg is one of the city’s most popular destinations located in the heart of Graz right by the Old Town. Formerly the site of a fortress, almost all of the original structure has been leveled and has since been transformed into a peaceful public park. Look out for the Clock Tower, the Bell Tower, the Chinese Pavilion, the Turkish Cistern, and the Open Air Theater, which makes use of the fortress’s original cellars. This part of town is also home to a number of great cafés and restaurants along the park pathways, with scenic views of the Old Town from the top of the towers. A lift is available for those who can’t or don’t wish to walk. 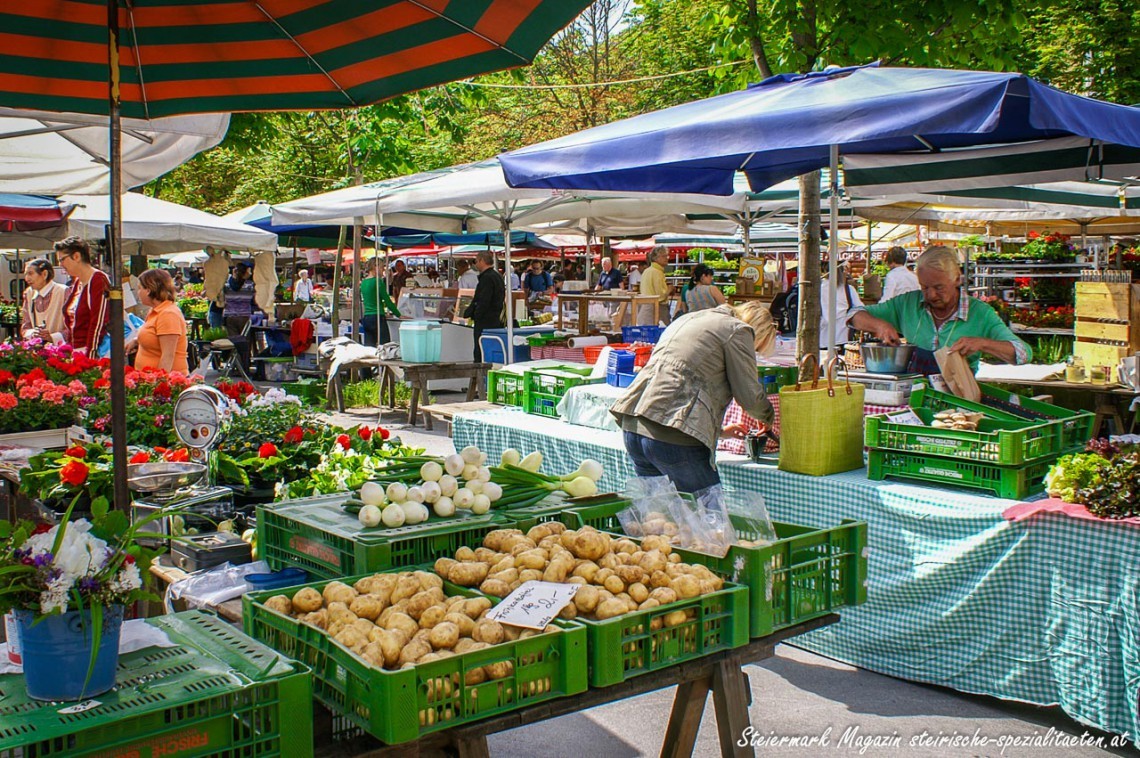 This daily market is located in the square originally called Holzmarketplatz or (‘Wood Market Square’), but in the 19th century was renamed Kaiser-Josef-Platz after the Emperor who granted the Protestants religious freedom. All the food is organic and/or is traditionally Styrian. Look out for the local aromatic apples such as Kronprinz Rudolf, Schafnase, or Ilzer Rose, and wonderful unctuous pumpkin seed oil. 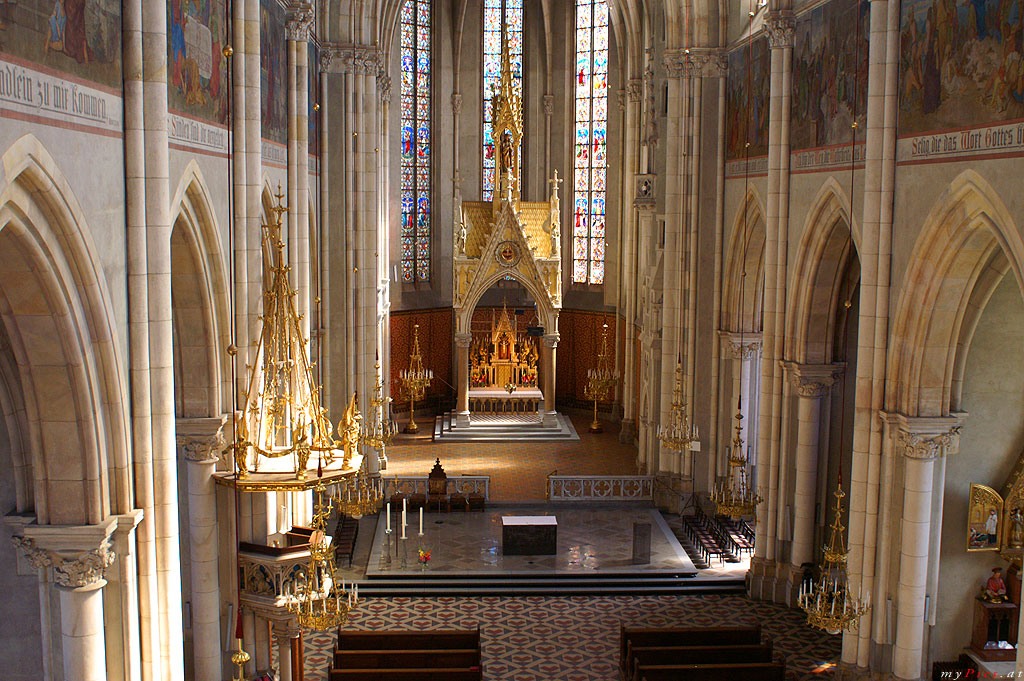 Herz Jesu Kirche (‘Church of the Sacred Heart’) is the largest church in Graz and has the third-highest church tower in Austria, measuring in at 109.6 meters. It was designed in the Neo-Gothic style by architect Georg Hauberrisser, and constructed from 1881 to 1887. The stained glass windows are breathtaking from inside, and admission to the church is free. 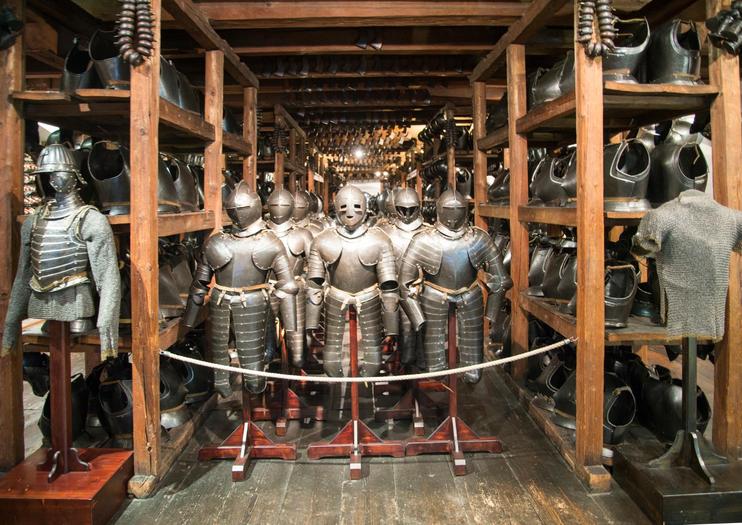 Because of its geographical position in the southern Alps and status as the capital of inner Austria, Graz was party to many attacks from the east. To defend the city’s people, Antonio Solar erected a Zeughaus (armory) in 1642, and it now stands as the only originally preserved armory in the world, with an impressive 32,000 exhibits ranging from the 15th to early 19th century. Weapons for ordinary soldiers and elaborate sets of armor for nobility are displayed inside, while the outside boasts an impressive façade with two Baroque statues of Mars and Minerva, the god and goddess of war. 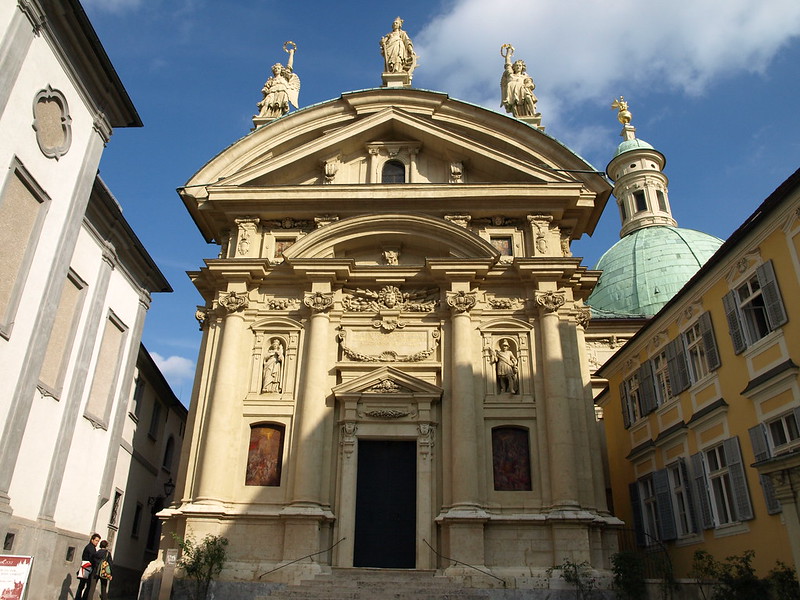 Commissioned by Emperor Ferdinand II in 1614 to his Italian court painter and architect, this mausoleum includes the first dome to be seen outside of Italy. It was to become one of the most important buildings in the 17th century, and is conveniently located right next to two equally impressive structures: St. Catherine’s Church and the Cathedral, where admission is free. The interior of the mausoleum is arresting, with intricate murals and a red marble sarcophagus for Ferdinand’s mother, Maria of Bavaria.

Murinsel (Island in the Mur)

Commissioned after Graz was voted European Capital of Culture in 2003, this impressive steel entity and artificial island was designed by American artist Vito Acconci. It’s actually a ship anchored in the water, and is connected to the city by footbridges on either side. This half-shell structure contains an amphitheater on the outside and a charming café inside, with an “island adventure” in between the two for children to enjoy. The entire island gives off a beautiful blue glow at night.

Eggenberg Palace is an architectural wonder at the edge of the city center. The main palace was commissioned in 1625 by Prince Hans Ulrich von Eggenberg to embody the newly instated Gregorian calendar. It intersects with the medieval castle from the 13th century, and there are picturesque gardens with peacocks roaming around the structures. There are a variety of galleries to explore within, including a Lapidarium with one of the largest collections of Roman stones in Austria, a coin collection, and the Alte Galerie, which showcases artwork from the Romanesque to late Baroque period. 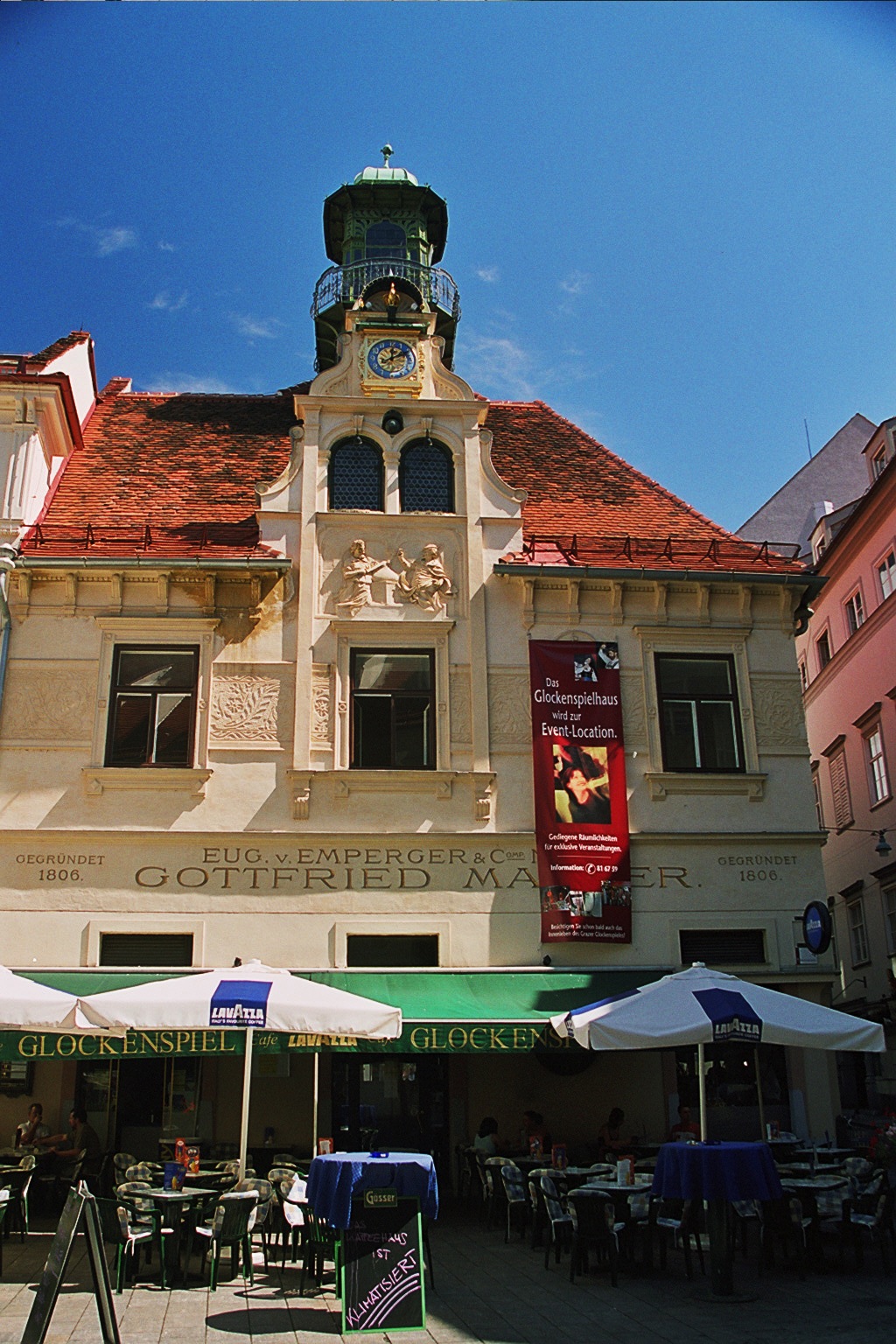 Originally built as an advertisement for a brewery, the Glockenspiel is a clock with daily shows at 11am, 3pm, and 6pm. When the clock strikes these hours, a dancing couple made of wood pirouette as the 24 bells chime. There are three different melodies, and they alternate from Christmas carols to Alpine folk yodeling and contemporary tunes. It’s a sweet spectacle to break for while you stroll the city, especially during Christmastime. Note that the female figure is holding a towel instead of a beer; it used to be illegal for women to consume alcohol in public.

Called ‘the friendly alien’ by the locals, Kunsthaus Graz is a masterpiece of innovative design, commissioned to celebrate the city’ period as European ‘Capital of Culture.’ Designed by British architects Peter Cook and Colin Fournier, this singular structure has 1,066 acrylic elements in its ‘skin,’ and is a distinctive part of the city. The Kunsthaus exhibits Austrian and international contemporary art shows, and the views from inside the building are truly spectacular.

7 Austrian Villages That Are Just As Beautiful As Hallstatt