Combining small country towns with gorgeous natural phenomenons and Unesco World Heritage sites, the Kimberley region offers a truly remote wilderness experience in Australia. We round up the best things to see and do here.

Located in the northernmost part of Western Australia, the Kimberley region is three times the size of England, but home to fewer than 30,000 people. Consisting of dramatic coastlines, sandstone gorges, natural wonders and powerful waterfalls, here are 10 attractions you must see when visiting remote Kimberley. 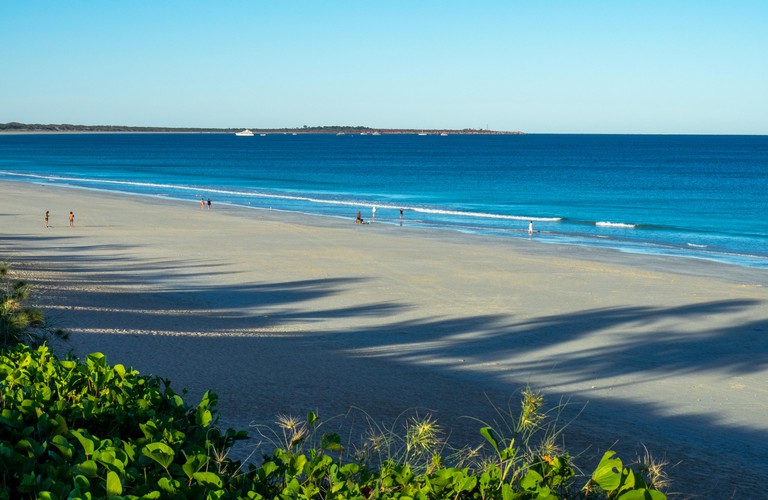 Broome is one of Western Australia’s top tourist destinations with several must-visit attractions, including Cable Beach. Looking just as good during the day as it does at sunset, evening camel rides along the sand are a popular activity. There’s also the Malcolm Douglas Crocodile Park, The Sisters of St John of God Heritage Centre and Roebuck Bay. In winter, the moon is reflected in the tidal flats at Roebuck Bay, creating an ethereal natural phenomenon called the Staircase to the Moon.

Fly over the Bungle Bungle Range in Purnululu National Park 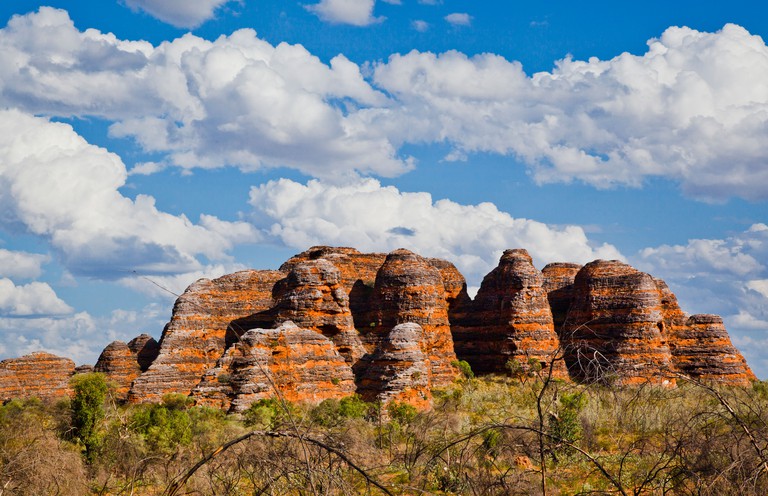 Amazingly, the Bungle Bungle Range’s unique set of beehive-shaped karst sandstone domes were only discovered in 1983. However, the orange and black striped domes have existed for around 350 million years and have been revered by local Indigenous people for approximately 40,000 years. Consequently, Purnululu National Park was established in 1987 and declared a World Heritage Site in 2003. One of the best ways to see the Bungle Bungles is via a scenic flight. Otherwise, there are local guided tours, lead from an Aboriginal perspective, and overnight options from Broome.

Lake Argyle is Western Australia’s largest freshwater man-made reservoir. Lake Argyle Cruises does half-day cruises (with a swim stop), sunset cruises to see the lake’s sandstone cliffs change colour, plus fishing and birdwatching tours. They also offer stand-up paddleboard, kayak and dinghy hire. A friendly warning, Lake Argyle has the world’s largest population of Johnstone River Freshwater Crocodiles, but they’re considered harmless to humans. A final attraction to check out is the infinity pool at Lake Argyle Resort & Caravan Park, for impressive views that are fortunately available to everyone.

Sir David Attenborough called Horizontal Falls “one of the greatest natural wonders of the world”. Home to one of the world’s largest tidal changes, crazy tidal currents pushing through tight parallel coastal gorges create this natural spectacle. Located in isolated Talbot Bay in the Buccaneer Archipelago, the best way to experience it is via a seaplane and jet boat tour with Horizontal Falls Seaplane Adventures. The Buccaneer Archipelago itself consists of approximately 800 isolated islands. 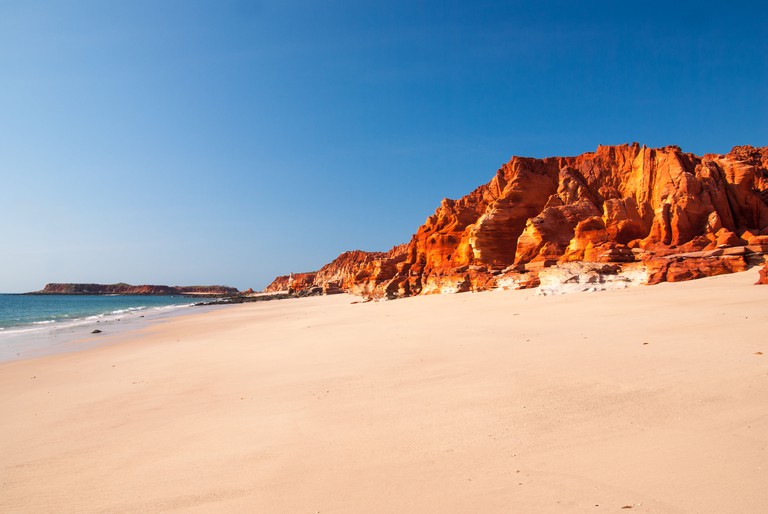 Cape Leveque is the northernmost tip of the Dampier Peninsula and home to rugged red cliffs, which look striking against the white sand and turquoise waters. The best way to experience Cape Leveque is through Kooljaman, a remote wilderness camp run by the local Bardi Jawi people. Featuring low-impact accommodation, popular activities at Kooljaman include fishing, snorkelling, self-guided walks and seasonal whale watching.

El Questro is 700,000 acres (283,280ha) of ancient landscape in the heart of the Kimberley. It has several accommodation options available, ranging from campsites to suites. There’re also a variety of activities on offer, including guided half- and full-day tours, helicopter rides, scenic flights and self-guided hikes. Top attractions include soaking in the thermal pools at Zebedee Springs, cruising through Chamberlain Gorge, swimming at Emma Gorge and seeing the sunset from Saddleback Ridge.

Mitchell Falls is located within Mitchell River National Park, home to 50 mammal species, 220 types of birds and 86 amphibian and reptile species. The four-tiered waterfall – created when the Mitchell River carved through the sandstone cliffs thousands of years ago – is a Kimberley icon. Although swimming isn’t permitted in Mitchell Falls’ plunge pool, if you walk the Punamii-unpuu Trail (an 8.6km (5.3mi) round trip) there are other swimming holes along the way. A pricier alternative to see the falls is via a helicopter tour, which is a Kimberley specialty. 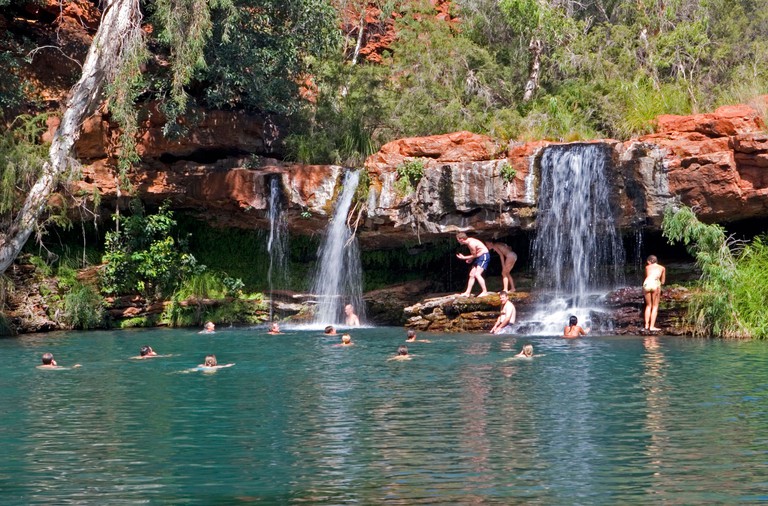 Western Australia’s second largest national park, Karijini National Park is home to freshwater pools, an eco retreat and gorges galore. The best swimming holes are the spring-fed Fern Pool, Fortescue Falls in Dales Gorge, Circular Pool, and the heart-shaped pool at Hamersley Gorge. Learn about the park’s Aboriginal history at the Karijini Visitor Centre and don’t miss the view from Oxer Lookout, which overlooks four different gorges. For the adventurous, it’s about a six-hour return trip if you want to hike Mount Bruce as well. 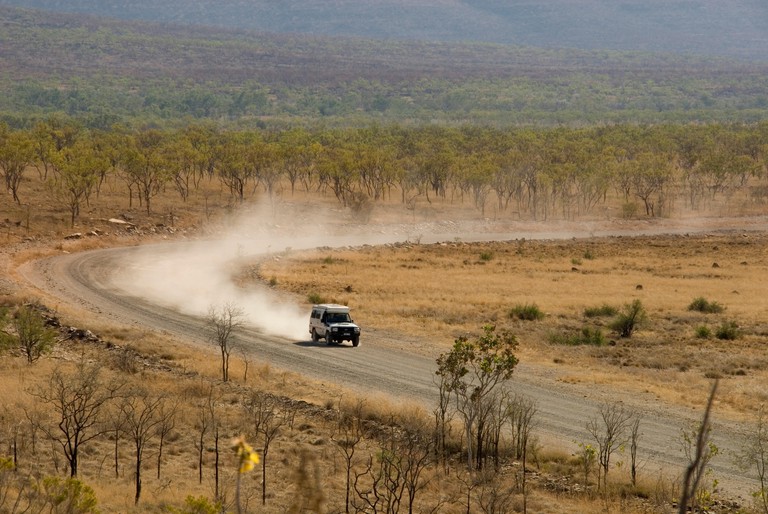 Known as one of the top attractions in Kimberley, the Gibb River Road stretches for 660km (410mi) and connects Derby to Kununurra. Only accessible by four wheel drive, Gibb River Road is surrounded by red sandstone cliffs, boab trees and national parks. Popular stops include Windjana Gorge National Park, which is one of the best places to see wild freshwater crocodiles. Stop for a swim at Bell Gorge or Manning Gorge, or spend a night at Home Valley Station. A final stop could be impressive El Questro.

Yes, another Kimberley waterfall you must check out, this one was created by the King George River plunging over ancient sandstone cliffs. King George Falls is the highest set of twin waterfalls in Western Australia. The river is culturally significant to the Balanggarra Indigenous people, as they believe the falls are the male and female Wunkurr (Rainbow Serpents). Located within the remote North Kimberley Marine Park, the best way to experience King George Falls is with a scenic flight or a cruise from either Broome or Wyndham.