Wondering what are the best small towns to visit in Portugal? You came to the right place. Here we share a list of the best towns in Portugal.

Portugal is a wonderful country that is filled with a variety of different artistic traditions, foods, and celebrations.

Like many other European countries, Portugal also has an extensive amount of history that has been preserved well over time.

However, many people who visit the country do not see these historical gems due to tourism mainly crowding around the major cities of Lisbon or Porto and thereby ignoring the small towns in Portugal that make up the majority of the country.

While this is still a good way to see some of the Portuguese cultures, it does not give you an accurate view of these smaller cities in Portugal that solidify the country’s identity. After all, only visiting Lisbon and Porto would be like going to the United States and only visiting New York City and San Francisco!

This is why we recommend that those curious about visiting Portugal should consider visiting some of these beautiful small towns in Portugal.

To give you a thorough list of all of the towns that are truly worth seeing, we did our research and have created this list of the 10 most charming small villages in Portugal that you must visit. 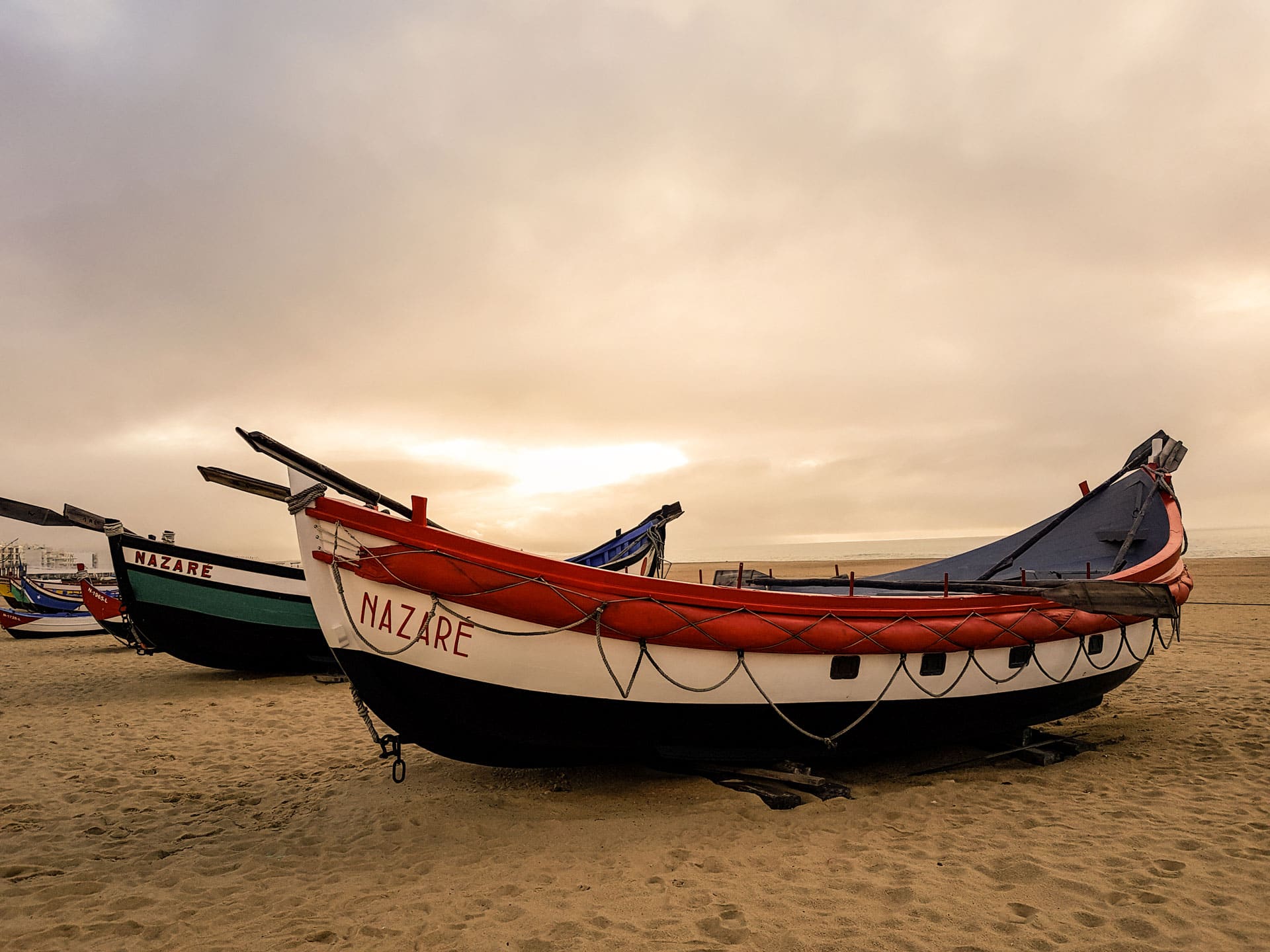 Lamego is a town located in the northern region of the Douro that is largely known for its extensive history reaching all the way back to ancient Rome.

It’s one of the best small towns in northern Portugal.

In contemporary times, Lamego has become well-known for its wide variety of cultural monuments alongside beautiful scenery and rural views.

Those who want to learn about the history of the town can go to the Lamego City Museum, while those wanting to immerse themselves in local art can visit the Ribeiro Conceição Theatre.

Lamego is also a town that has beautiful local parks, with the Remédios Park being one of the most well-known parks of its kind in northern Portugal. Over the years, Nazaré has built up a reputation for being one of the most beautiful places in Portugal.

Whether you want to go to the beach, partake in some fishing or simply admire the view, this unique coastal town is a great place to be.

Praia da Nazaré is often rated as one of Portugal’s top beaches, with many locals flocking there during the summer to get away from the tourist crowds of busier beach towns.

This beach is also unique in the sense that there is barely any wind there due to the incredibly high mountain that protects Nazaré from more tumultuous weather conditions.

However, Praia da Nazaré is most well-known for having some of the largest waves in Portugal due to the impressive underwater canyon that causes some waves to even reach 100 feet high.

After you’re done surfing, go into town for some nice and affordable local cuisine!

Tavira is a town in the Algarve known for some of its incredible historical landmarks that have been well maintained through the present day. It’s one of the best places to visit in the Algarve.

For example, the Tavira Castle still exists as a monument to the town’s Moorish history, being a great example of historical architecture that is still in good condition.

Even those who are not a fan of castles will still appreciate the beautiful garden that shows off some of Portugal’s most wonderful plants (such as the Centennial bougainvillea).

What makes Tavira especially unique when compared to other towns in Portugal is that it has a camera obscura!

This device was built in 1931 and stands in a large water tower.

If you’re tired and want to take a break from walking around, the Praça da República is a great place to go to try some new food, sit down and do some people watching for a bit!

There are also some beautiful statues and fountains that truly give this area a unique ambiance. 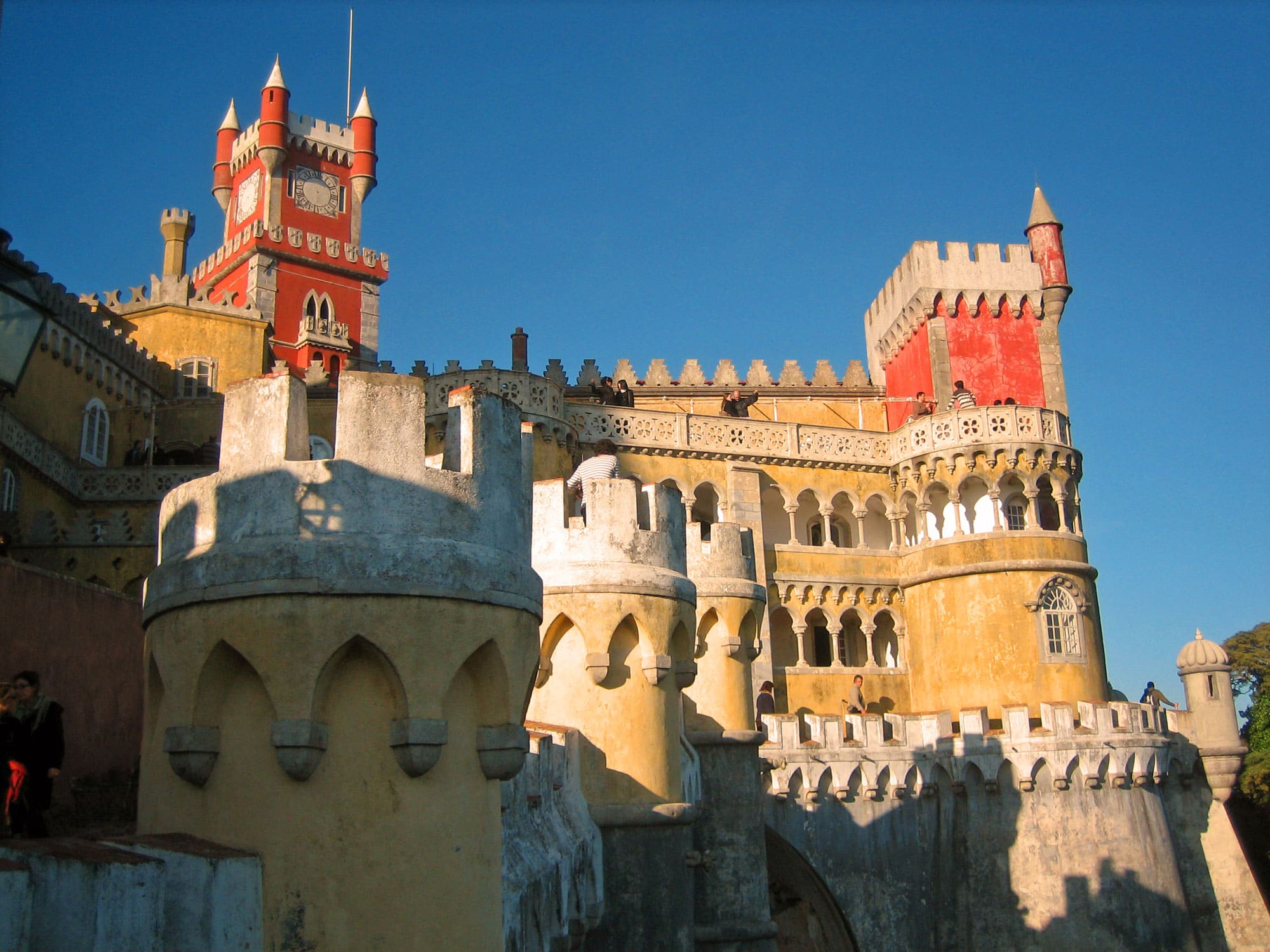 If you’re somebody who wants to see a truly traditional Portuguese town, you can’t do much better than Obidos, one of the many medieval cities in Portugal.

Originally given as a gift to Queen Urraca in 1214, the town has retained a surprising amount of infrastructure since its Medieval days.

Even just entering the town forces you to be confronted with some beautiful art with the Porta da Vila welcoming to you to the town with its intricate murals.

Those looking to see the bright colors that Portugal is known for will love the hidden cobbled back-streets that form the core of the city and lead visitors through alleyways filled with colorful buildings. 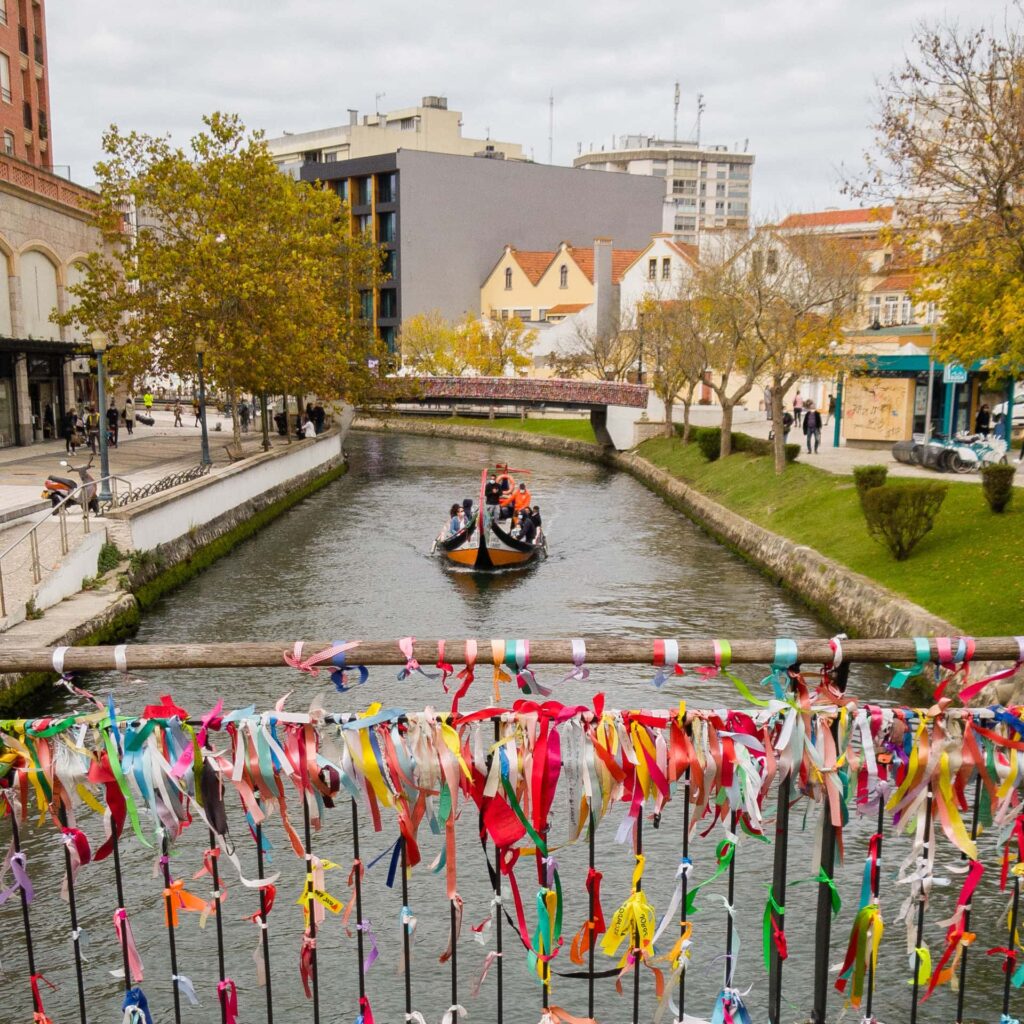 Those interested in religious relics will appreciate the town of Sintra.

This is one of the most religious places in Portugal with the centerpiece being the Quinta da Regaleira, a gorgeous mansion packed with religious symbolism.

Not only will it be one of the most gorgeous experiences you’ll come across during your time in Portugal, but you’ll also be able to surround yourself entirely with history!

If you can’t stay for an entire day, we recommend that you arrive in the afternoon and stay through the morning—this will give you time to avoid the midday crowds that make the town quite packed and tourist-filled. 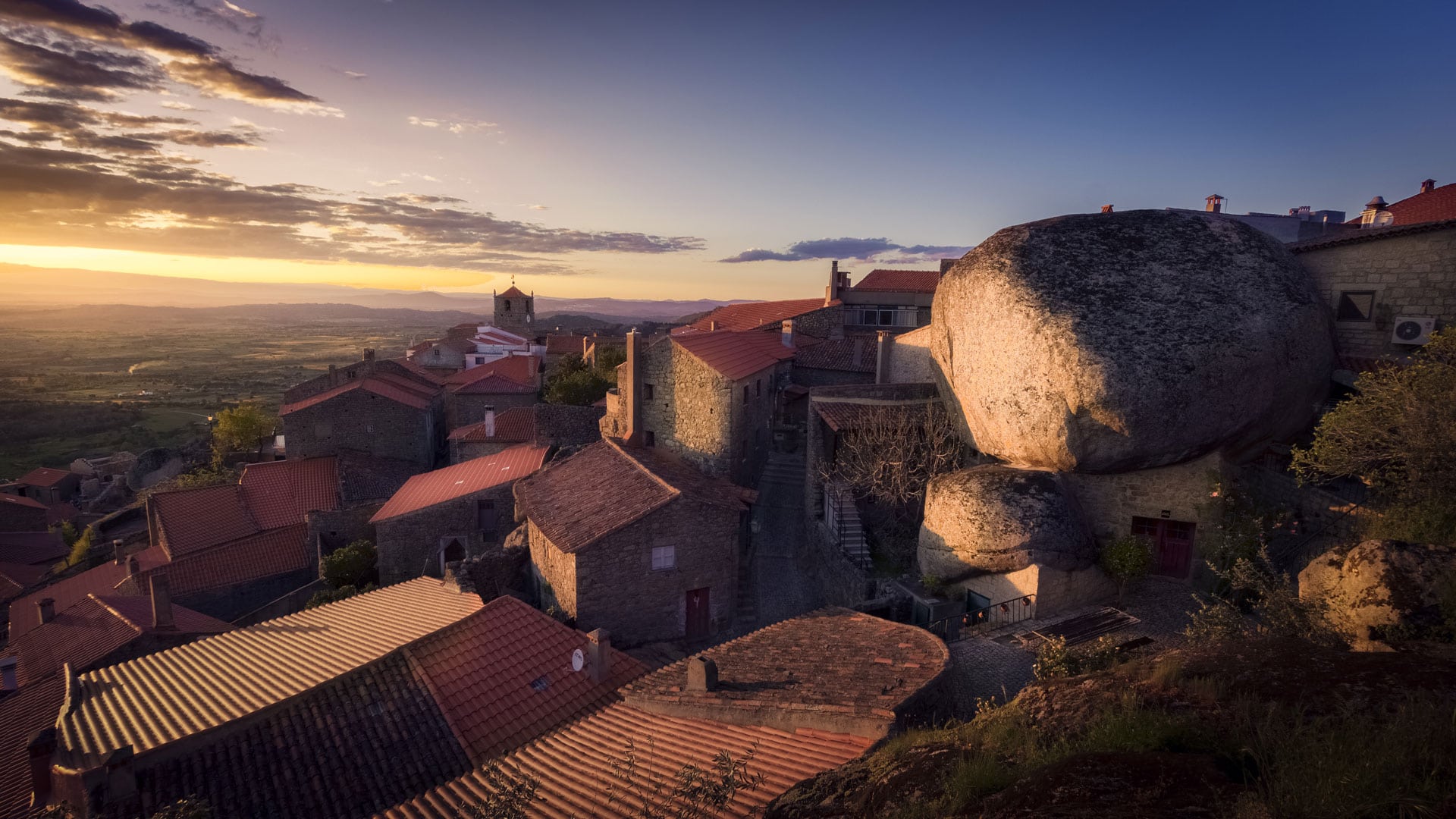 As a place that is next to a lagoon and intersected by various canals, Aveiro is a truly classic maritime town with a lot to see. It is one of the best towns in Portugal to visit.

If you want to get up close and personal with the water, all you have to do is take a ride on a moliceiro (a Portuguese gondola) or take a quick dip in the lagoon!

Those wanting to look at the historical aspects of this town should check out the Mosteiro de Jesus, a gorgeous monastery in the middle of Aveiro that used to also be the home of one of Princess Joanna of Portugal.

The woodcarving and tile floors in the monastery are especially gorgeous and an important reminder of a time when religious art was the identity of the entire area.

If you want to see more traditional Portuguese art, you should definitely go to the Museu de Aveiro where you can find some truly wonderful Renaissance sculptures and paintings. 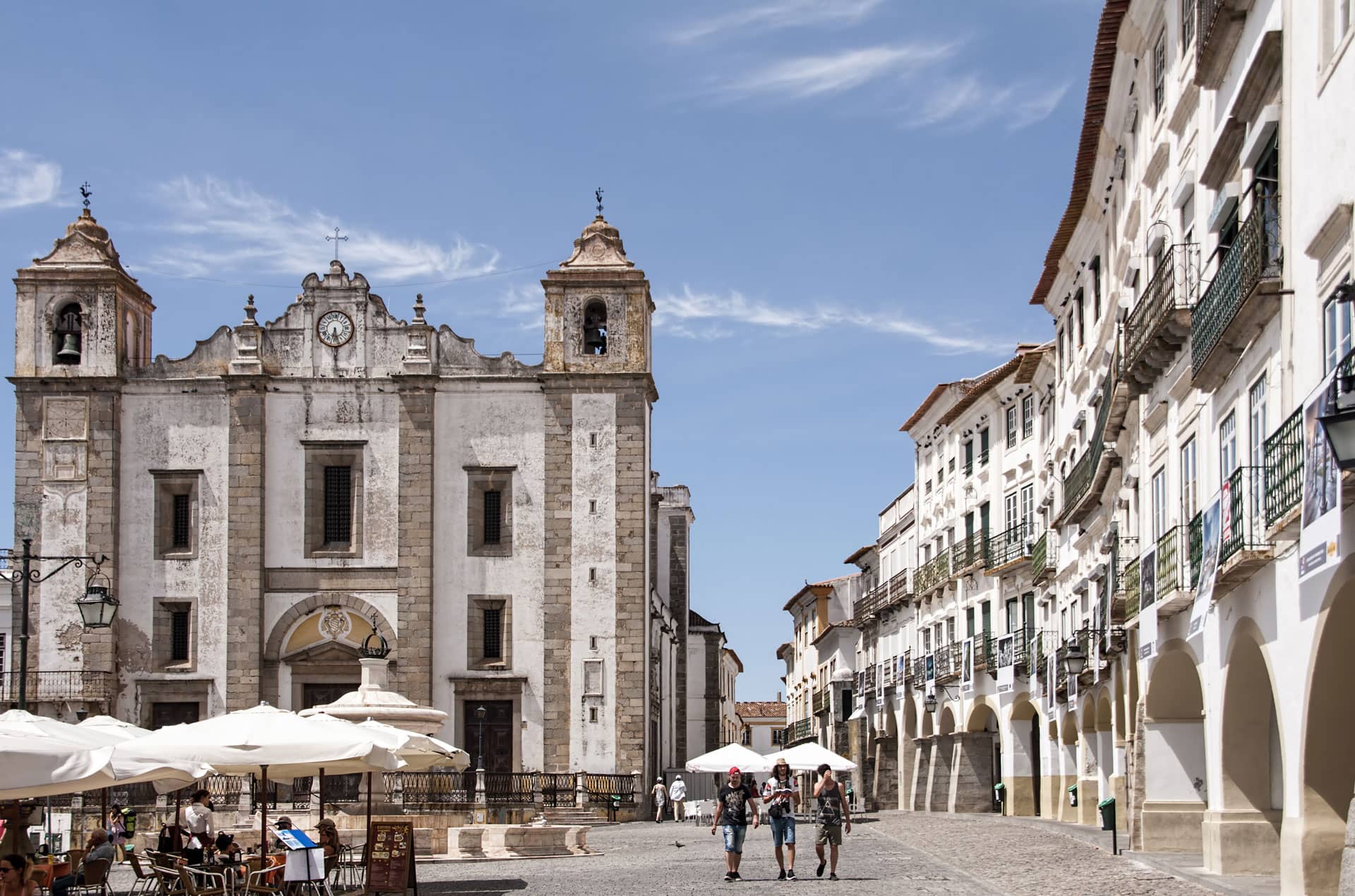 Monsanto is one of the most beautiful places in Portugal simply due to the fact that it blends in effortlessly with the surrounding nature. The town is nestled against a mountain slope and counts numerous winding roads and houses nestled into the side of the mountain’s structure.

Those who visit this town will be impressed by how large boulders are seamlessly integrated in the cities architecture. The rocks are squeezed in between buildings and lay on top of roofs. As you wander through the charming small streets you will come across many other examples of unique architecture that have been built around the local natural elements.

Perched upon the mountaintop is also the stunning site of the Templar castle, a monument that still stands to this day.

Architecture geeks will appreciate the buildings that closely resemble the Portuguese Manueline style buildings alongside even earlier cottages.

The town itself is also very accessible, only being a short bus ride away from either of the major cities. 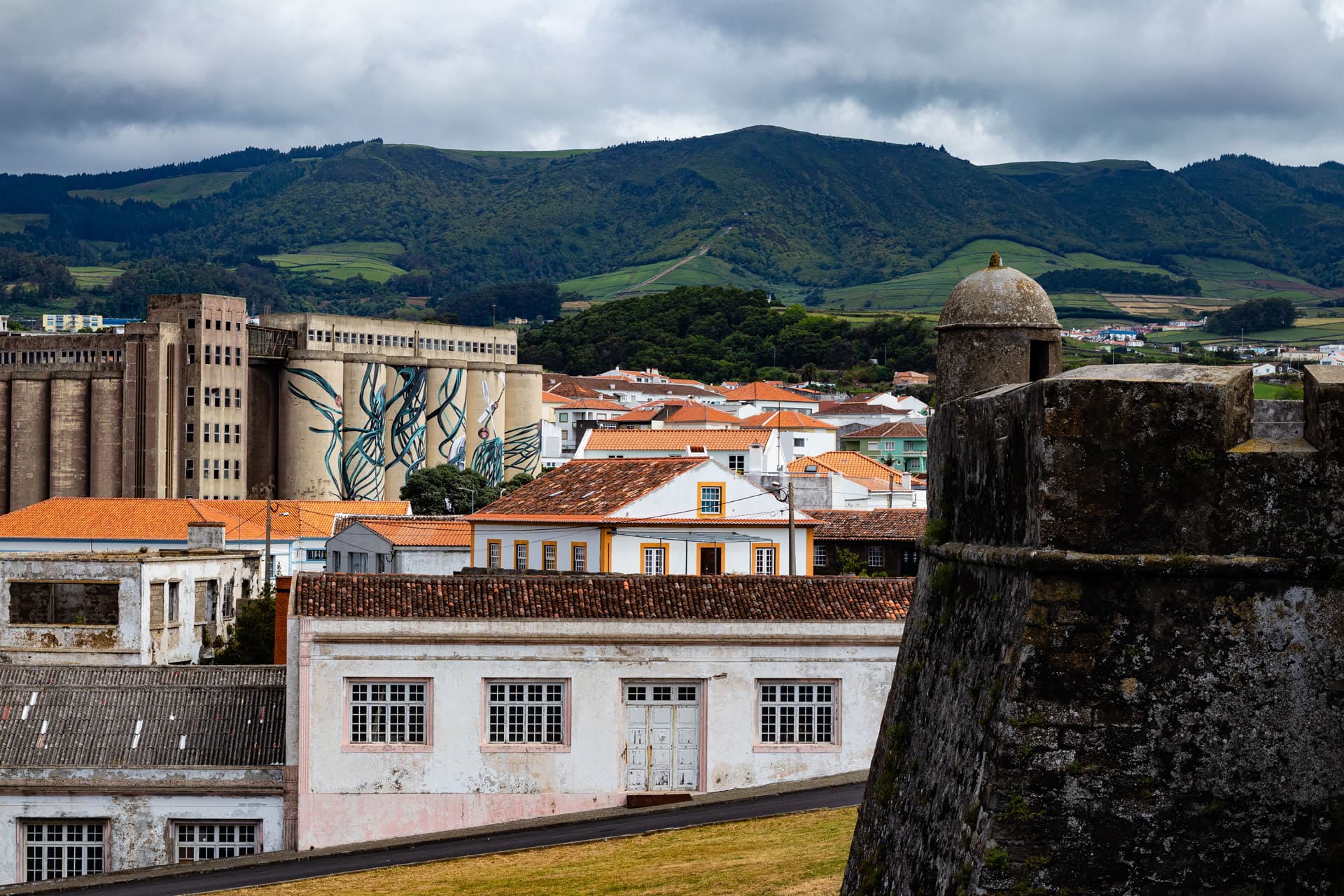 Évora is a beautiful town that has many different types of authentic Portuguese details.

One striking example is the historic town center which is considered a UNESCO Heritage site. Visiting the old town can easily take up an entire day if you want to explore every nook and cranny. There are many entrancing, winding streets cheered up by floral terraces. Be sure to look around every corner as you may be rewarded with colorful patios full of colorful flowers and plants.

When it is time to take a break from your exploration you can recharge in a variety of wonderful restaurants or hunt for souvenirs in the many shops.

If you decide to go to the center, though, we recommend doing so either in the early morning or at night, as it can get quite crowded!

Visitors to this town won’t be able to avoid the staggering profile of the Évora Cathedral that overlooks the entire town.

The Gothic design of the 13th-century cathedral boasts an astounding amount of gold and silverwork as ornamentation. If you want to come close to an even older structure, we recommend that you visit the Évora Roman Temple.

Another unique aspect of this town is that it is a university town, with Évora University attracting college students from all over Europe.

This university is also the second-oldest university in the country, giving you another detailed idea of what historical Portuguese architecture looks like. 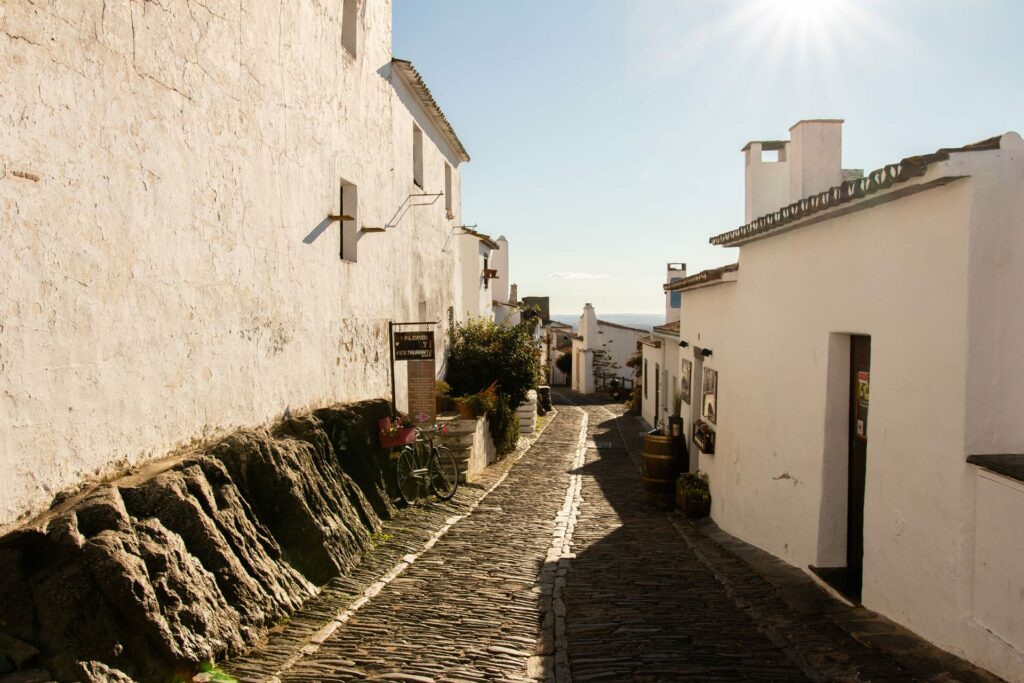 Angra do Heroísmo is a town filled to the brim with Portuguese heritage, even being listed as a World Heritage town.

Visitors to Angra do Heroísmo can come face-to-face with the town’s unique history through the Monte Brasil, a mountain that was formed due to a volcano, the Guilherme Moniz, erupting in ancient times.

In modern-day society, Monte Brasil is now a great scenic destination for both locals and tourists.

It offers scenic views of the city and if you’re lucky you might even spot some wildlife.

Whether you are interested in taking a camping trip up the mountain or just going on a day trip, we recommend that you walk up to fully appreciate the atmosphere.

Of course, renting a car is also possible if you aren’t able to walk up the mountain.

Another important historical site in the town is the Praça Velha, otherwise known as the oldest civic space in town.

Sure, the buildings are beautiful in this area of Angra do Heroísmo, but you will also want to pay attention to the tiling and floor patterns that you’re walking on.

Though it’s a community gathering space, it is quite beautiful and is a great example of the care consistently put into Portuguese design!

Monsaraz is one of those towns that truly feels isolated from everywhere else in Portugal, giving you a feeling of complete serenity.

Those who decide to stay in Monsaraz will be treated to a stunning view of the Guadiana Valley and get to have a truly authentic view of what rural Portugal looks like, with surrounding farms being within walking distance.

If you’re somebody who appreciates historical infrastructure, you’ll be glad to know that Monsaraz is entirely surrounded by large walls that were originally built in Medieval times to keep out intruders.

This doesn’t serve a purpose in modern times, but it is incredibly beautiful and shows you what traditional Portuguese brickwork looks like.

Monsaraz is also a great town to visit if you’re somebody who is interested in the art of winemaking.

As one of the most notable wine destinations in Europe, Monsaraz boasts an impressive amount of wine-centric businesses and cooperatives that you can visit.

If you want to experience this culture firsthand, you can schedule a wine tour and learn more!

As much as we loved Porto and Lisbon we had the impression that we only experience the truly Portuguese vibe once we exited these towns and headed into Portugal’s extensive countryside.

Driving from one small town in Portugal to another on the narrow winding roads we really could unwind and we started to appreciate the laid-back lifestyle that makes the Portuguese such a hospitable and loveable people.

We really hope you will find the time to visit and stay in these charming little towns in Portugal.

5 Places To Live In Portugal; 2 To Avoid