One of the oldest cities built by European settlers in North America, Quebec City hosts a good range of things to do. The original French settlement dated back to the early 17th century and has left many historical buildings around the picturesque Old Town.

From the impressive, majestic Montmorency Waterfall to the lively Petit-Champlain neighbourhood, and from Dufferin Terrace to Notre-Dame de Quebec Basilica-Cathedral, the capital city of the Province of Quebec offers a true trip back in time. Meanwhile, gourmands will certainly enjoy local food specialities like poutine and maple syrup grandfathers. Take a look at what else Quebec City is famous for.

What are the best things to do in Quebec City?

1.Start the day in Place Royale
Step back into history in a lively square 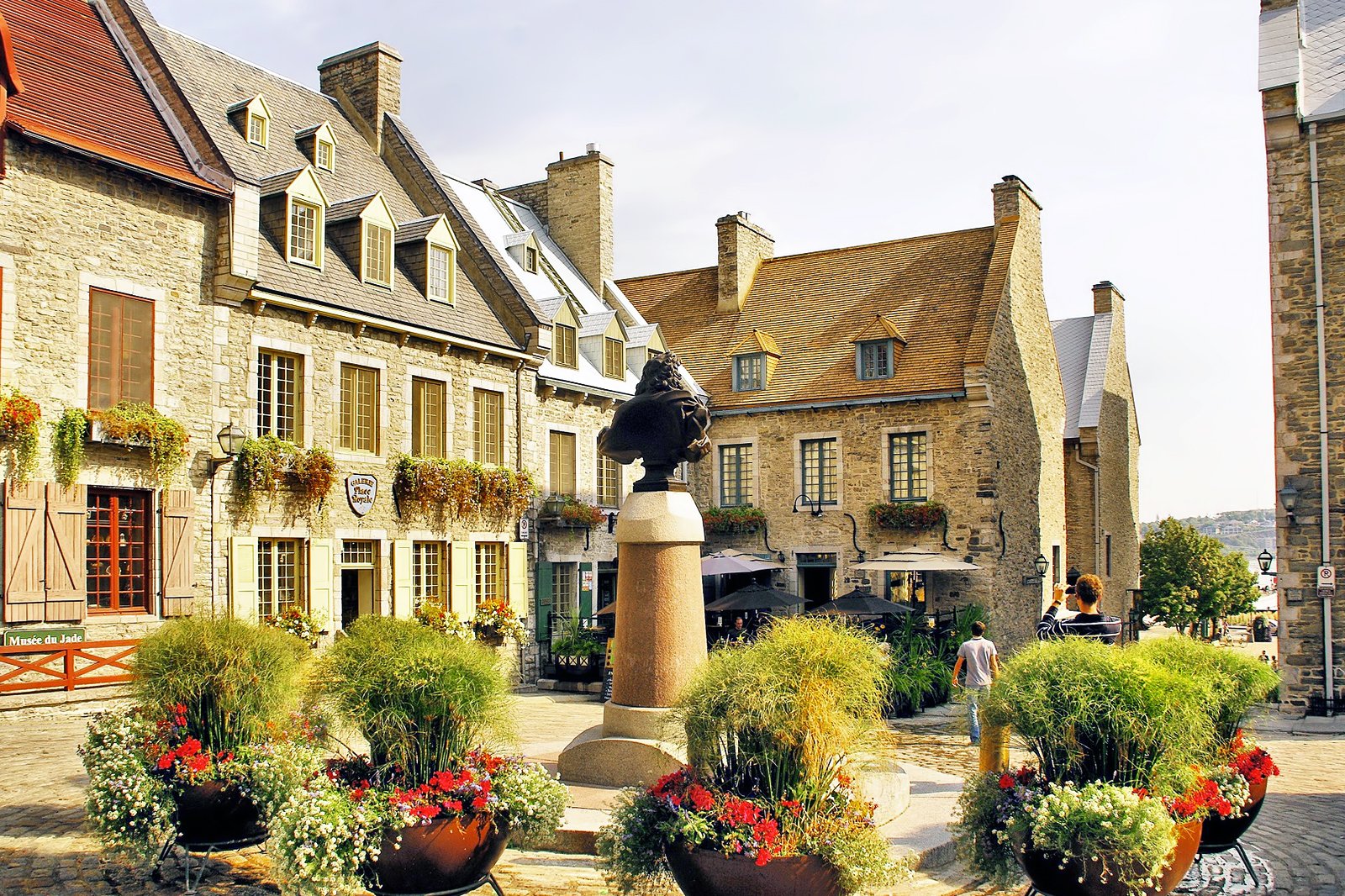 Place Royale is a cobblestone square that offers you a journey back in time as it’s the place where Samuel de Champlain founded New France in 1608. Lined with vintage stone buildings housing shops, bars and restaurants, the square is also home to Notre-Dame-des-Victoires, the oldest church in North America. While you’re here, don’t miss the stunning eye-deceiving mural known as La Fresque des Québécois – the Quebecer’s Fresco – which retraces the history of Quebec City. 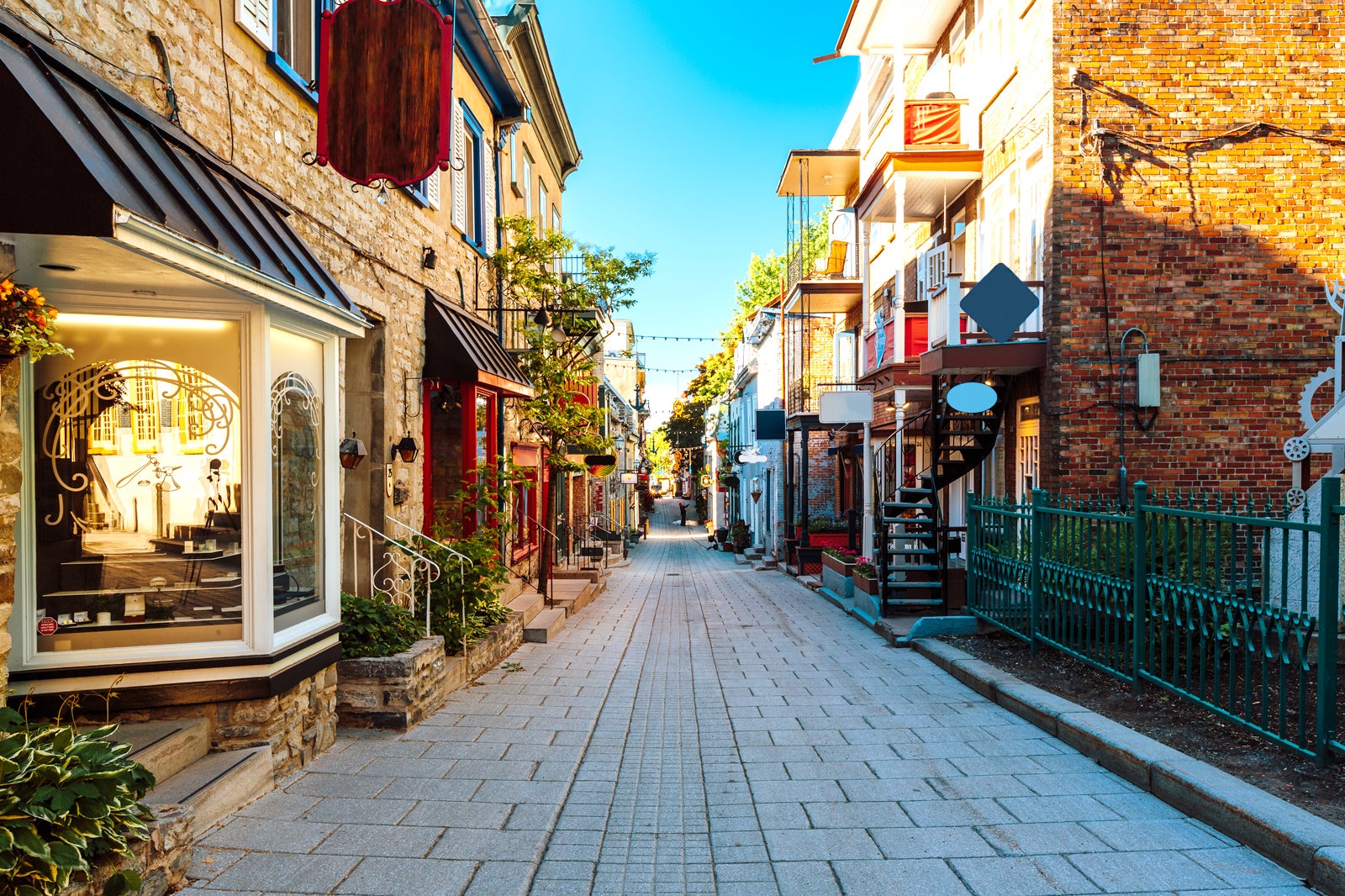 Old Quebec is the place where everything started in Quebec and Canada. Established in the early 17th century, Old Quebec is a UNESCO World Heritage site split into the Upper Town and the Lower Town and connected by a funicular. Filled with quaint boutiques, bars and restaurants, the narrow, cobblestone streets of the Old Town are also home to many attractions, like the Fort Museum, the Dufferin Terrace, and many other. Spice up your visit with a tour of the Old Town on a horse-drawn carriage.

3. Admire the view from Dufferin Terrace
See Quebec City from above 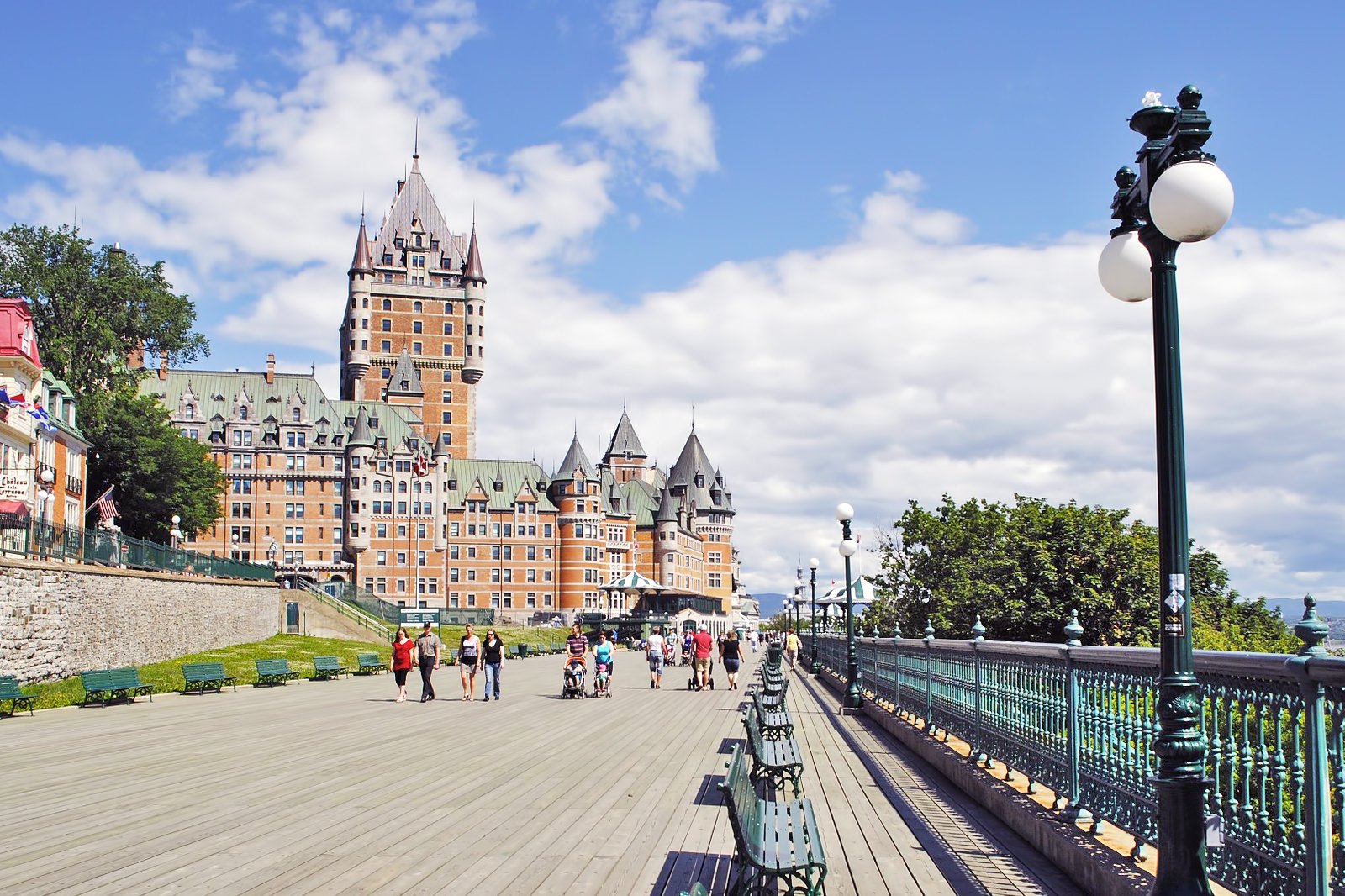 Overlooking Old Quebec and the Saint Lawrence River, Dufferin Terrace is one of the most popular vantage points in Quebec City. Dominated by the magnificent Fairmont Le Château Frontenac, the wooden terrace gives strollers plenty of space to wander, meditate or relax on a bench while enjoying the views. In winter, do not miss the rush ride downhill on the slides, which are open from mid-December to late March. 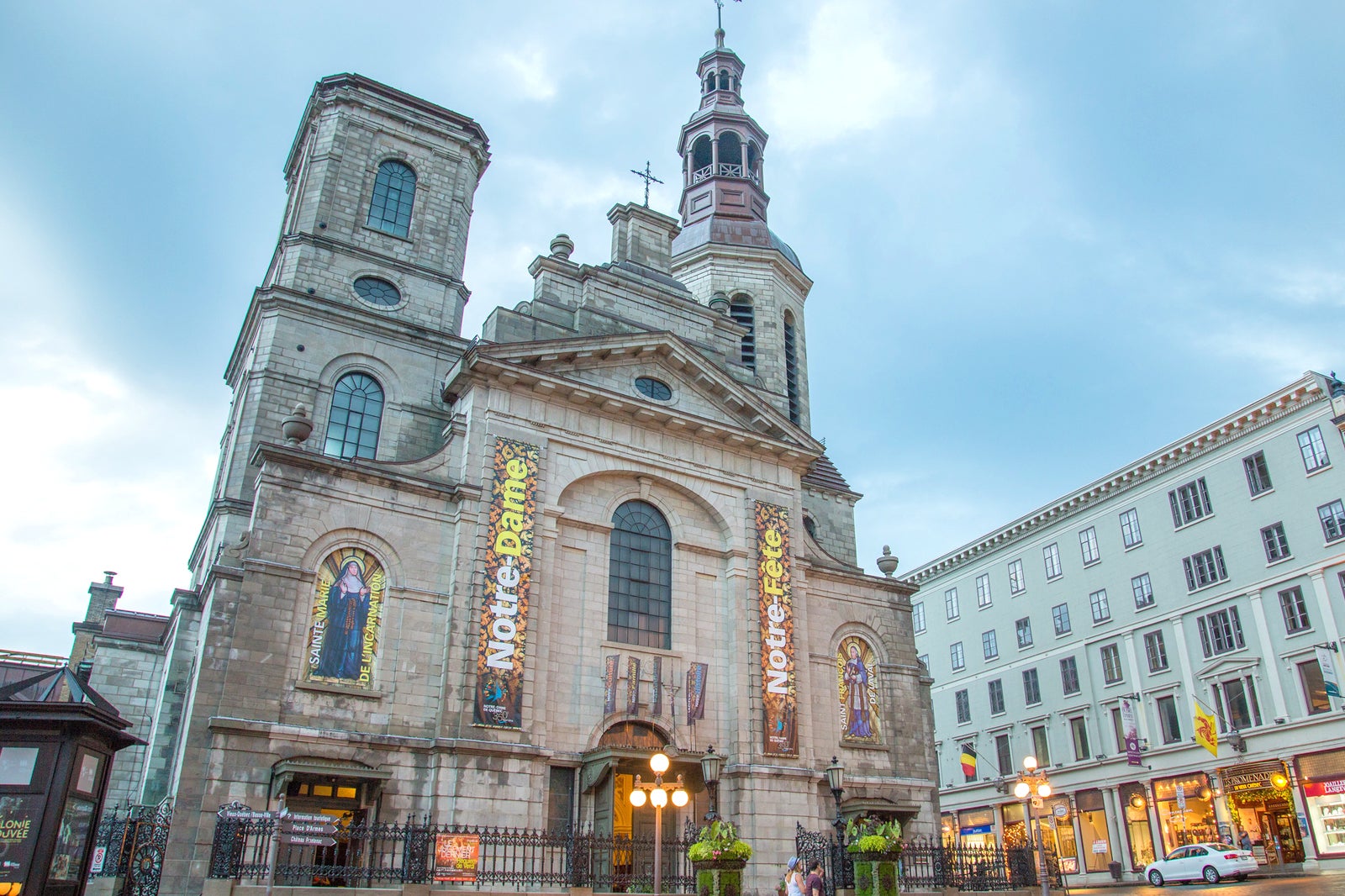 Erected in the heart of Old Quebec, Notre-Dame de Quebec is a 17th-century Basilica-Cathedral that’s listed as a National Historic Site of Canada. One of the oldest churches in North America, it’s richly ornamented and features a splendid Neo-classic façade. Don’t forget to visit the attached museum and the crypt, which houses the graves of New France governors and Quebec bishops.

5. Stroll in Promenade de Champlain
Take a walk along the Saint Lawrence River 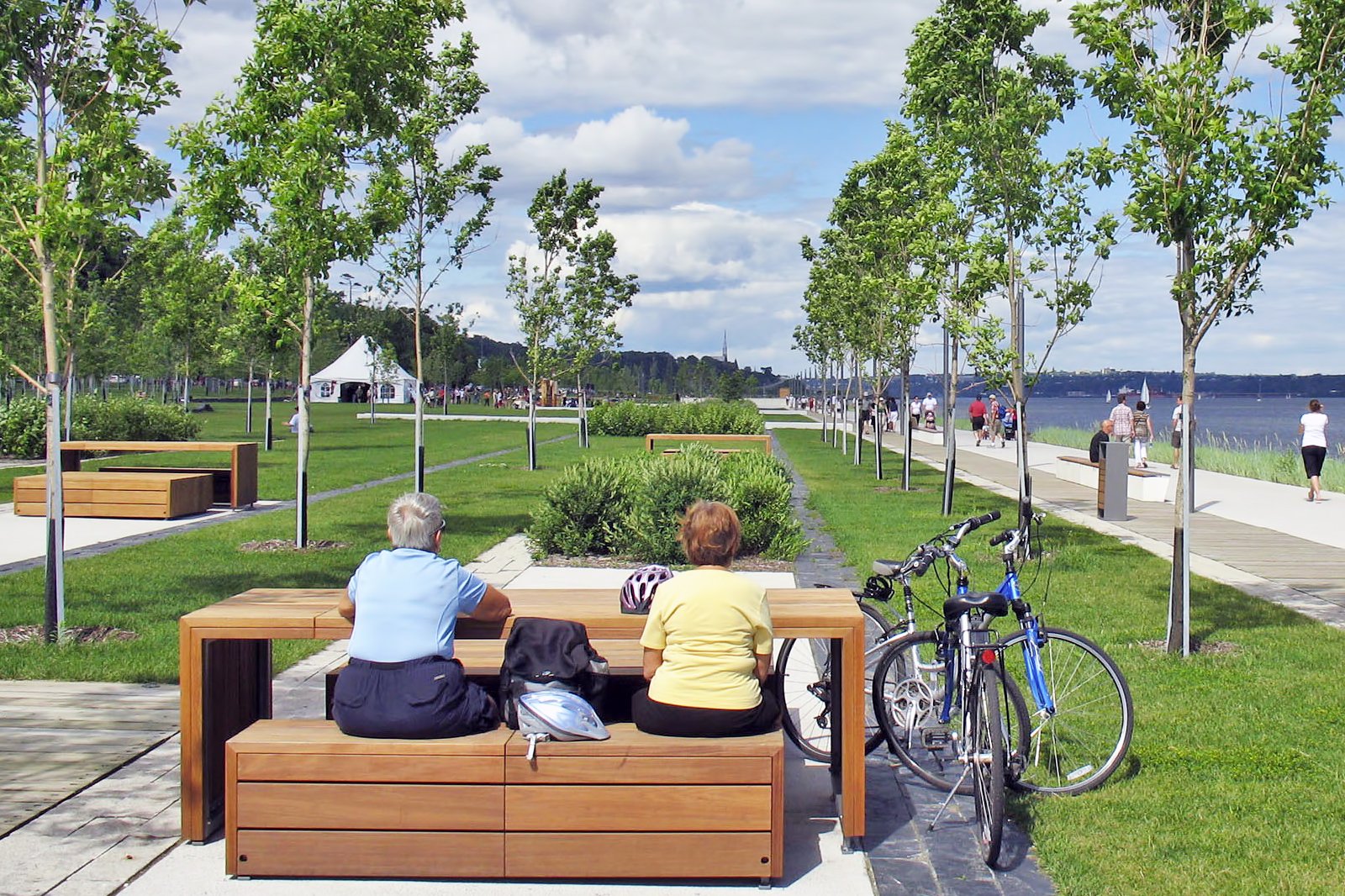 Stretching for 2.5 km alongside the Saint Lawrence River, Promenade Samuel de Champlain is a very pleasant place for a stroll. Established on a former industrial wharf, the promenade features 5 distinct areas: the Cageux Station, the Tequenonday Wood, the Sports Station, the Shore Trail and the Quay Station. Art and nature meet at Promenade de Champlain, which is also a cool spot for nature photography. Do not miss the view from the observation tower at the southern end. 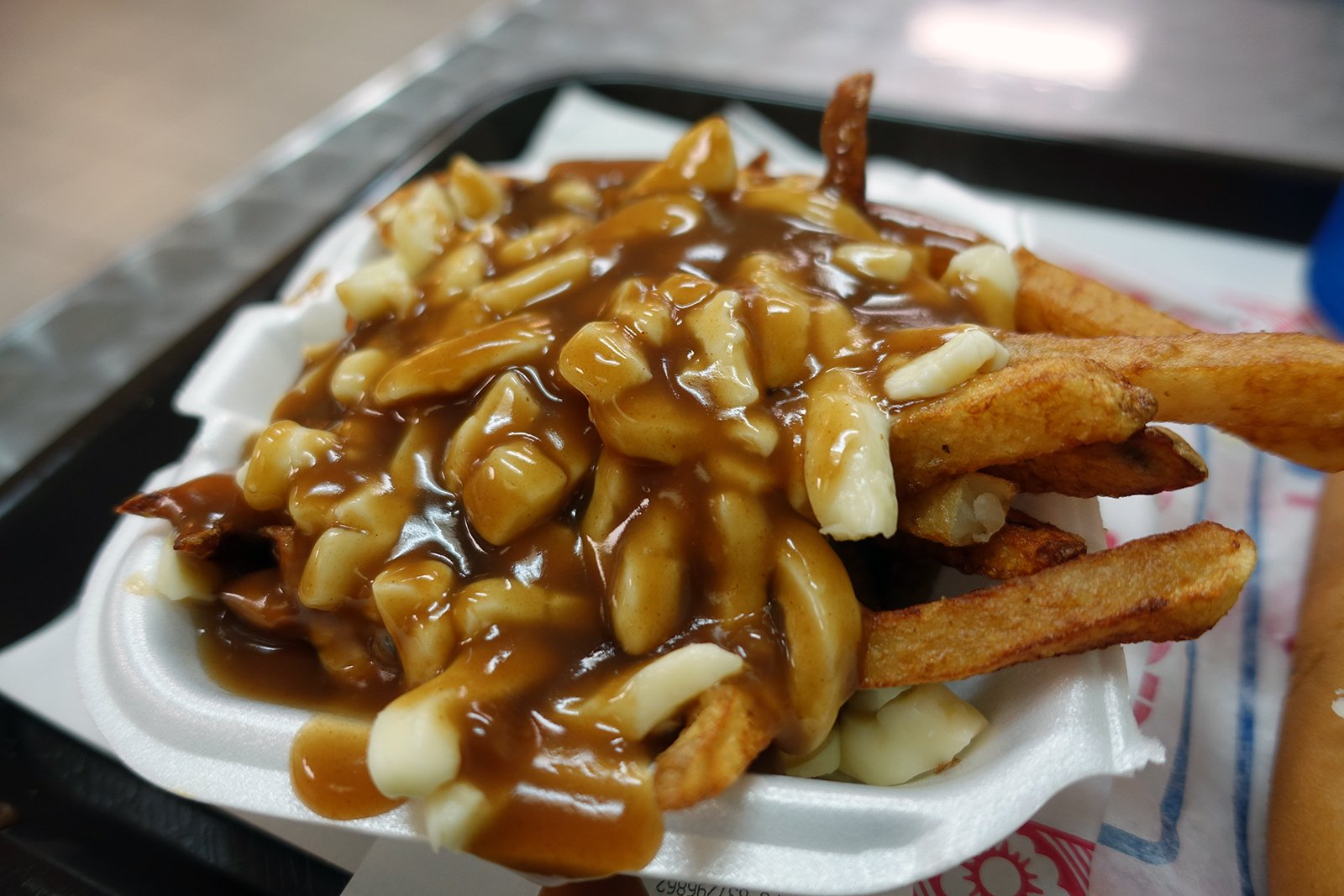 Originating from the Province of Quebec, poutine is often referred to as Canada’s national dish. Made of French fries and white cheddar cheese curds in a brown gravy sauce, it’s fair to say that poutine is a hearty, filling dish. Another local speciality that you should not miss is the sweet dessert known as maple syrup grandfathers. This basic dish, consisting of dumplings simmered in maple syrup, is simply delicious. Both of these local dishes, and many more, can be found in most restaurants in Quebec City.

7. Shop in Petit-Champlain neighbourhood
Soak in the vintage décor and atmosphere of Old Quebec City 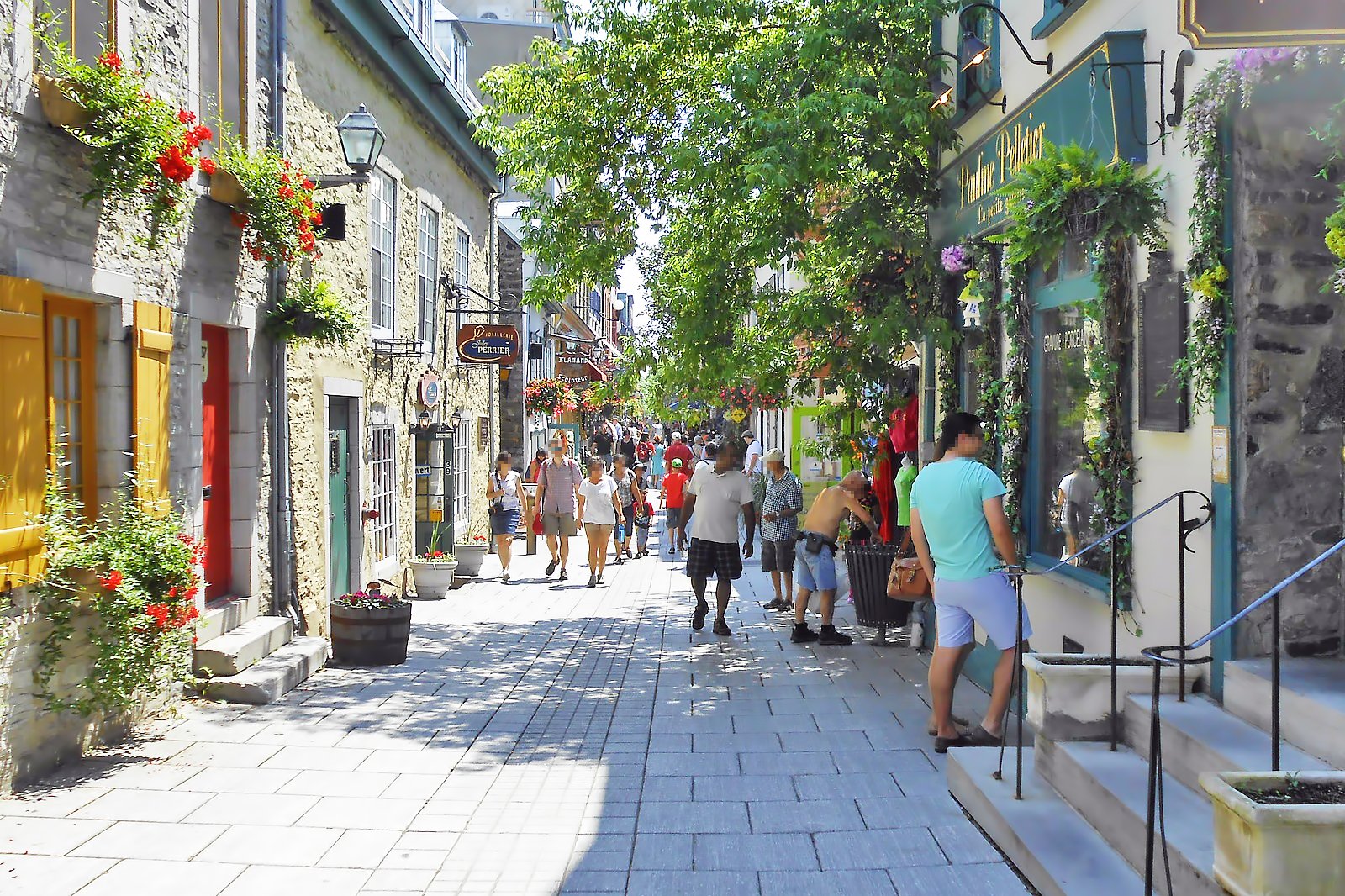 The Quartier Petit-Champlain, as it’s known in French, is a lively shopping area at the foot of Dufferin Terrace in Old Quebec. You’ll find quaint boutiques selling quality crafts, clothes, jewels and more here. You’ll also have the opportunity to enjoy pleasant pauses during your shopping spree as the area is home to a lively dining scene. It’s a great place to take a leisurely walk and just soak in the vintage décor and atmosphere of Old Quebec City. 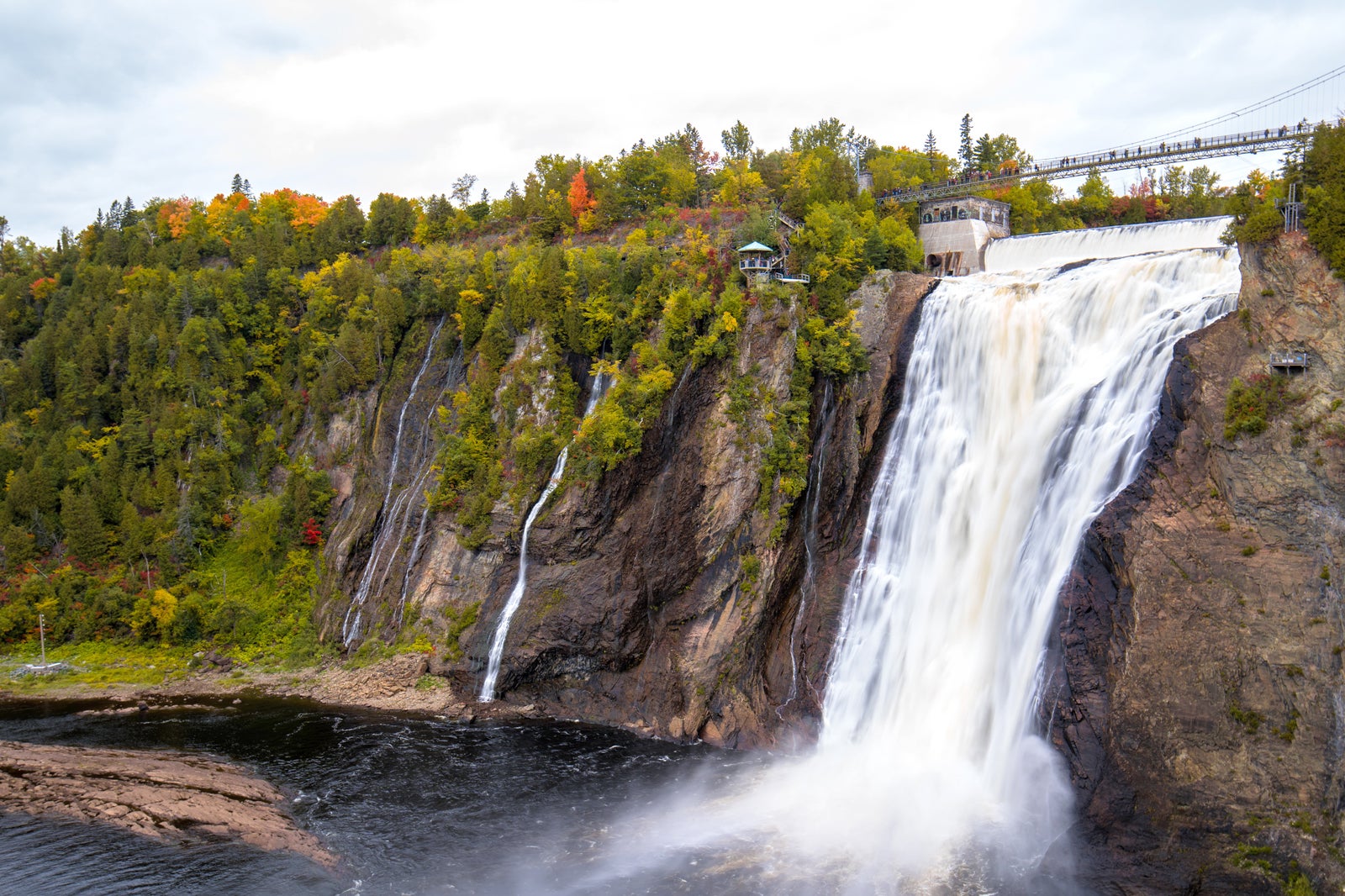 Located 10 km north of the city centre, Parc de la Chute-Montmorency is a great place for a first encounter with the spectacular and extensive natural environment of Canada. One of the most visited sites in Quebec, it has a waterfall that’s 30 metres taller than the famed Niagara Falls. Easy to get to by bus from the city centre, the site features many observation platforms offering great photo opportunities. Zip-lining and rock climbing are 2 activities at hand for thrill-seekers, and a restaurant offers a cool spot for a pause, especially on its terrace. Entrance to the park is free. 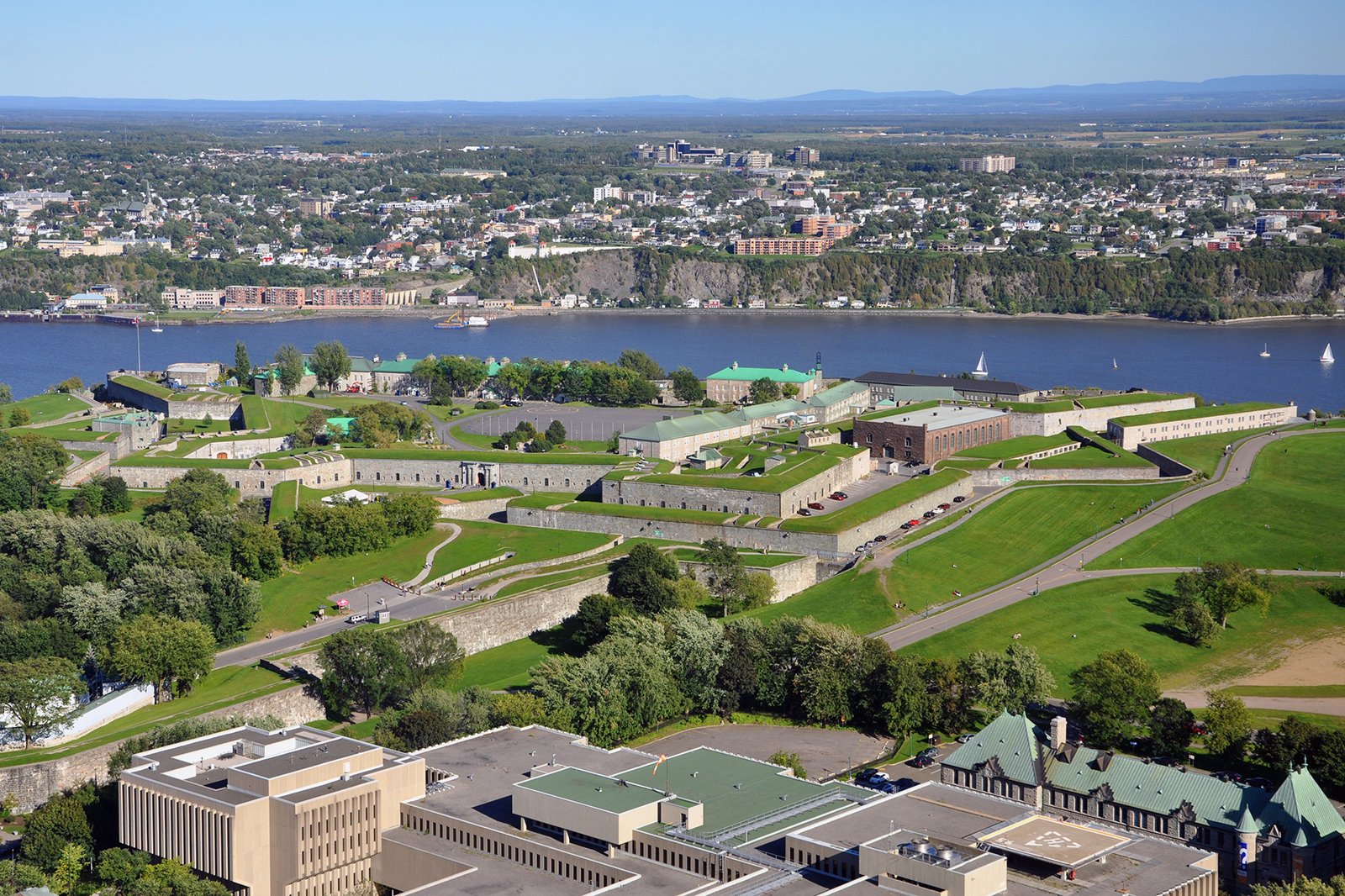 Quebec Citadel is the oldest army building complex in North America, and remains an active military base to this day. Established in the early 17th century, the star-shaped complex is home to the monarch’s and Governor General of Canada’s residence, and to the Royal 22nd Regiment Museum. Like at Buckingham Palace in London, the changing of the guard ceremony is one of the main highlights of Quebec Citadel. Take the guided tour to make the most of this National Historic Site of Canada.

10. End the day bar-hopping in the Old Town
Enjoy a drink at some of the most popular night spots in Quebec Old Town 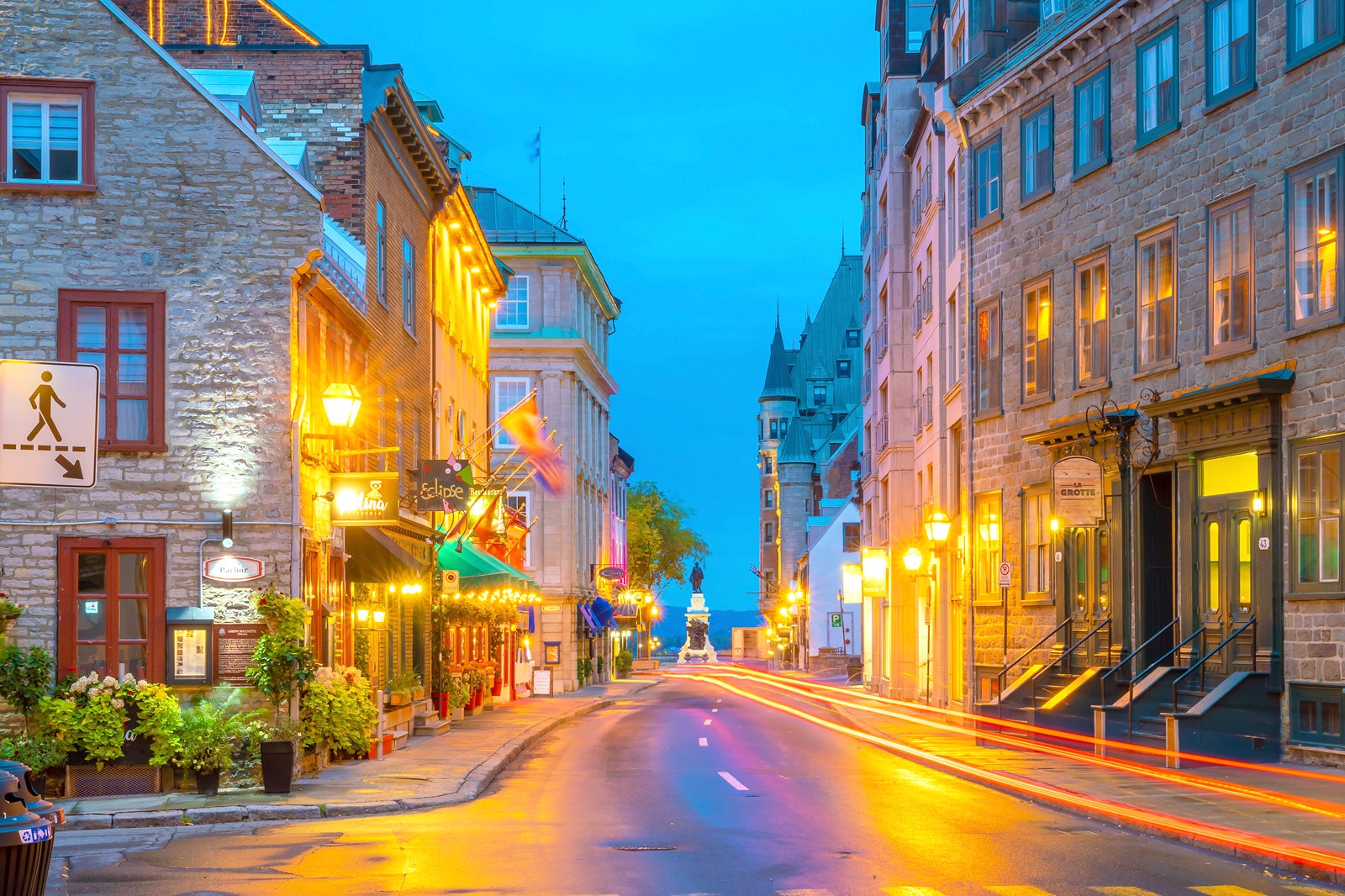 Quebec Old Town is home to a vibrant scene of bars and restaurants that offer great spots for a late-night drink. Head to Le Sacrilège Bar on Saint-Jean Street and enjoy a selection of over 20 draught beers in this quirky vintage pub. For an artier ambience, you can go to Le Cercle on Saint-Joseph East Street. This multifaceted complex is as cool as it is trendy. Last but not least, Pub St-Patrick on Saint-Jean Street is a genuine Irish pub, at which you can dine on classic pub grub in a friendly atmosphere.

F.i.g.h.t.i.n.g for a mate, elk r.a.m.m.e.d each other violently causing an uproar on a street