When people want to experience the Netherlands, chances are they go to Amsterdam. There’s plenty of things to see in Amsterdam, but what makes it a great destination for tourists is how it opens up the rest of the country for them. By staying in Amsterdam, you can spend some of your time exploring the city and the rest of your time on all the things to see in the Netherlands outside of Amsterdam. And trust me there’s plenty to see outside Amsterdam. From other major Dutch cities to quaint villages built along canals and full of windmills, the best day trips from Amsterdam may not take you far but they’ll still show you somewhere completely new.

Just a short trip from Amsterdam, a visit to the quaint university city of Utrecht couldn’t be easier. Start your visit here at the central square of Domplein and gaze up at the soaring Dom Tower. After a walk through the Pandhof Domkerk, head up the tower for city views and a chance to listen to the melodic bells of the carillon. Take a walk through the city’s University Quarter to find great cafes and markets, before finding the fantastic Oudegracht waterfront in the Stadhuis Quarter. Whether you take a cruise along Utrecht’s canals or simply walk along them, you’ll find some of the city’s prettiest spots here. Down by the water, you’ll find plenty of bars and art galleries that actually sit in cellars beneath the road. And of course don’t miss the psychedelic lights of the Ganzenmarkt Tunnel which heads down to the canal.

Getting there: With a train ride from Amsterdam to Utrecht only taking 30 minutes, it’s the easiest way to make this great day trip. 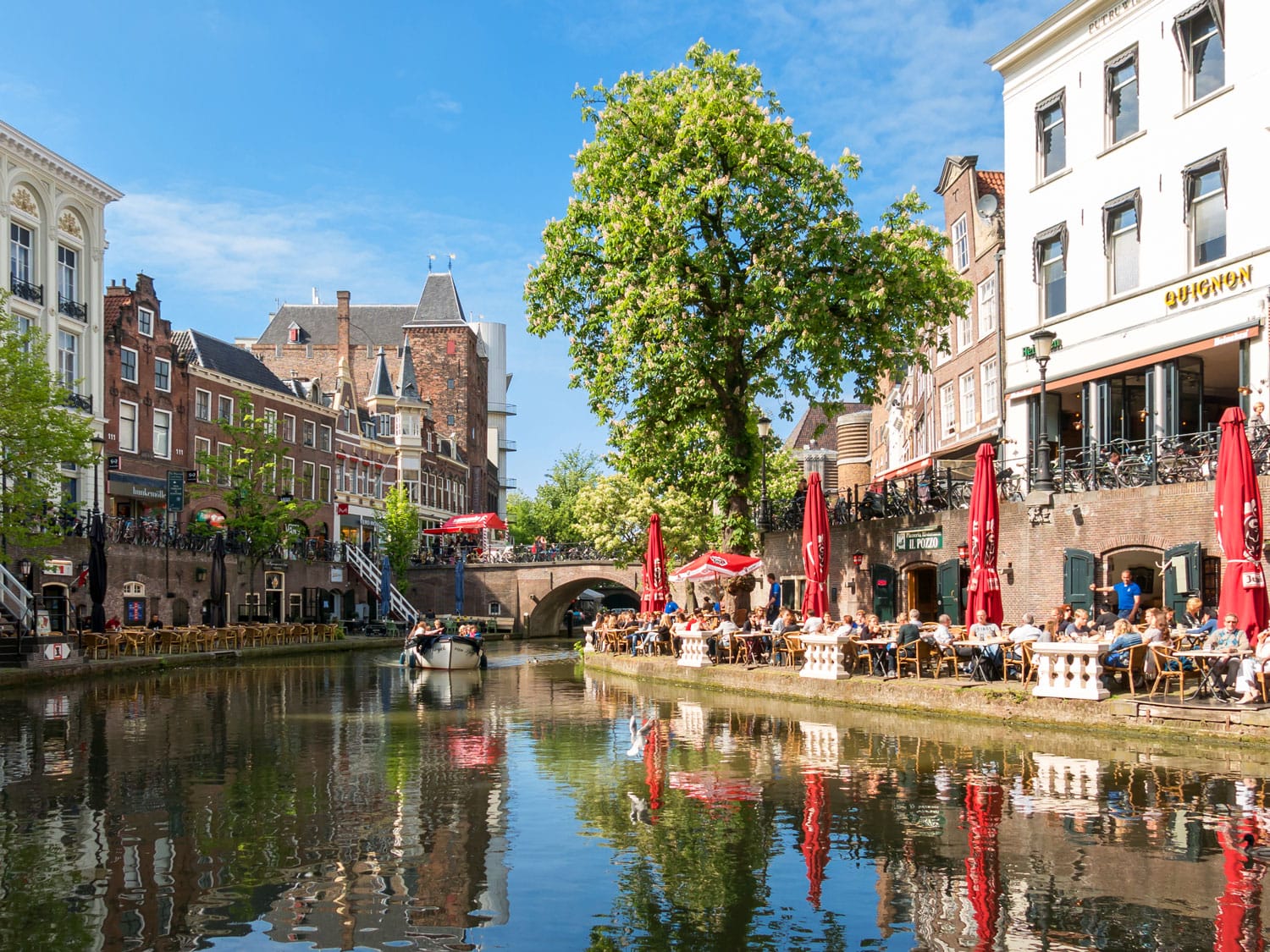 The Netherlands is famous for its tulips and there’s no better place to see them than at Keukenhof. Officially the largest flower garden in the world, you’ll see not just tulips but all sorts of flowers in Keukenhof, surely one of the best Amsterdam day trips possible. Located in the small town of Lisse, the gardens are only open in Spring from mid-March to mid-May. You don’t need to have a green thumb to appreciate these gardens as the flowers are often arranged in large patterns and simply bursting with color. Then there are the flower fields, where long stripes of bold colors run for row after row and create vibrant rainbows, best seen from the air, or at least from the small windmill on the grounds. At Keukenhof everywhere you look is full of life and color, it’s an ideal spot for avid photographers.

Getting there: The easiest way to get to Keukenhof is with this guided tour, especially since the tour includes fast track entry. Coming on public transport is a little trickier depending on where you are in Amsterdam, but the frequent 852 bus from Europaplein will get you to Keukenhof in around 30 minutes. 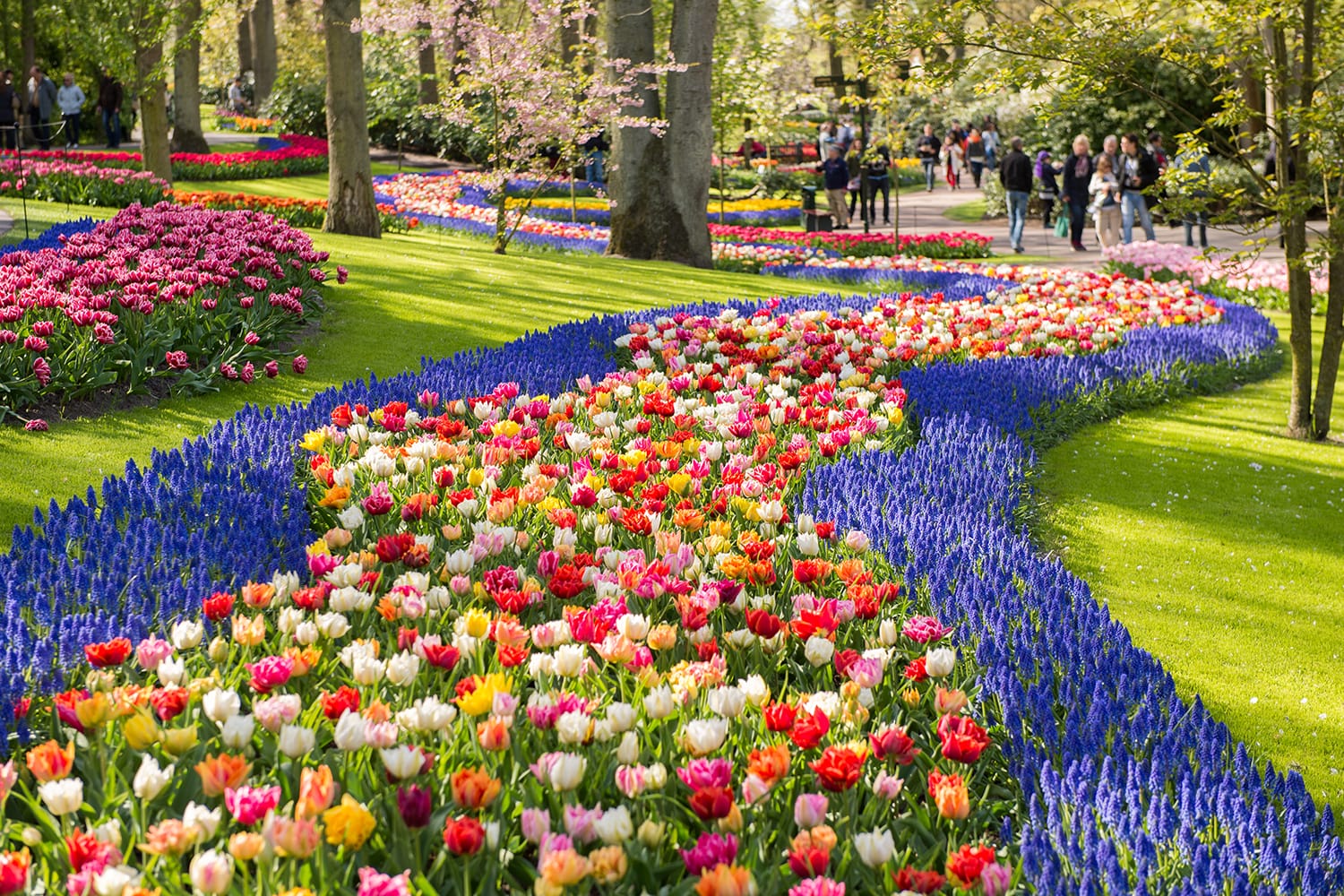 Often dubbed the “Venice of the Netherlands”, there’s no doubt that the canal village of Giethoorn is one of the best day tours from Amsterdam. Like something out of a fairytale, in this green village the best way to get around is by boat since there aren’t really any roads to speak of. To add to the charm of Giethoorn, the houses here are mostly beautiful old cottages, retaining the atmosphere of days long past. The cottages here are particularly well-known for their thatched roofs, further affirming Giethoorn’s idyllic nature. While you won’t want to miss a boat ride, there are also some paths through town for you to walk or cycle along as you soak up the village’s beauty.

Getting there: Giethoorn really isn’t the most convenient place to reach from Amsterdam, so joining a day tour really cuts down the stress of a visit. That’s because going by public transport involves a 3 hour journey of two trains and a bus to get there. 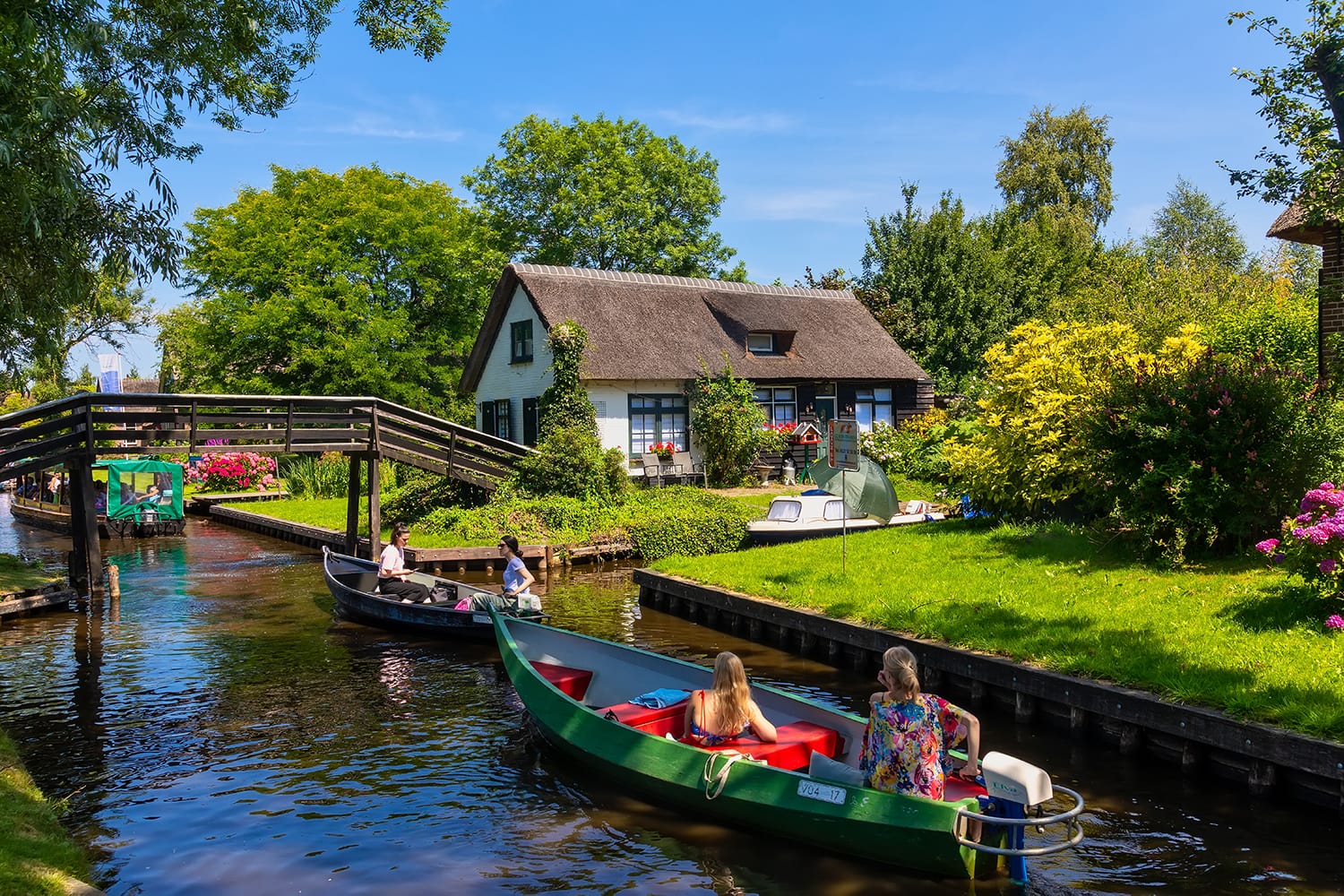 People love to see the windmills when they come to the Netherlands, and Zaanse Schans is ideal for those looking for their fix. A small village, Zaanse Schans is one of the best places to visit from Amsterdam thanks to its scenic collection of traditional houses and windmills along the river Zaan. Not only can you view this quintessentially Dutch scene of 18th and 19th century windmills, you can also learn more about the heritage of the windmills and the area in the Zaans Museum. While in the village, it’s also possible to learn how the iconic Dutch wooden clogs are made, as well as visit local bakeries and cheese shops. To get a glimpse into the traditional heritage of Holland in a convenient half-day trip, Zaanse Schans is the way to go.

Getting there: Zaanse Schans is only a 20 minute train ride from Amsterdam Centraal station, making it an easy trip to make. However, visiting with a guide for a half-day trip will give you a better sense of the history and culture behind the village. 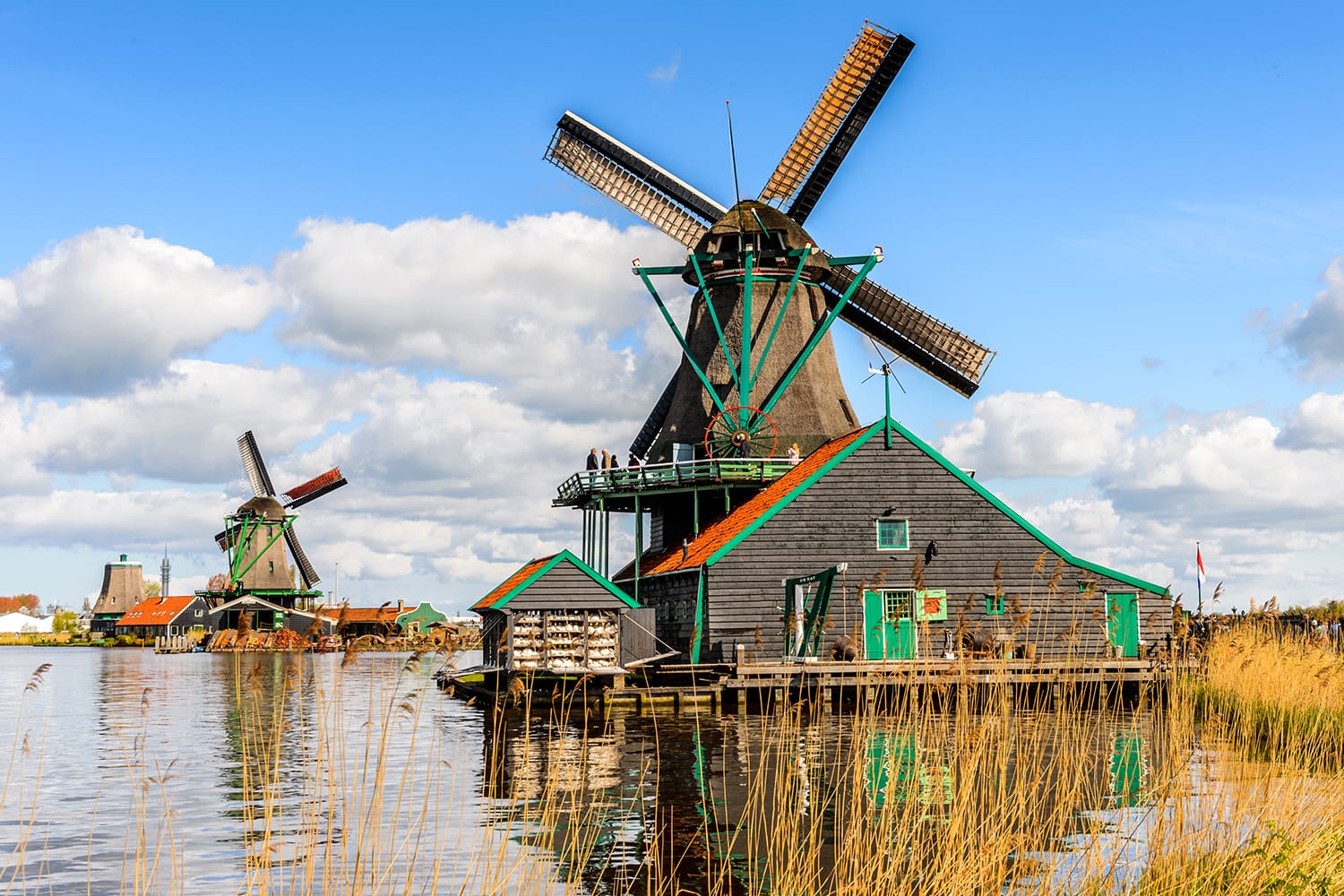 For a small city experience in the Netherlands, the best candidate is Delft, one of the best places to visit in the Netherlands. Although best known for its signature blue and white Dutch ceramics, Delft is also home to its fair share of interesting city scenery. Among the city’s small network of canals, consider beginning with Markt square, as that way you can see both the Town Hall and Nieuwe Kerk. At two different edges of the Old Town, seek out the Windmill, the Rose, and Oostpoort gate, each striking in their own way. One of Delft’s claims to fame is as home to renowned artist Johannes Vermeer, who’s life and work can be seen in the city’s Vermeer Centre. Of course, the other is Delft’s ceramics the story of which you can uncover in the Royal Delft factory, the last of its kind in the country.

Getting there: The simplest way to reach Delft from Amsterdam is by taking the regular 1 hour train that connects through Rotterdam. However, if you want to combine Delft with other nearby cities, a guided tour will be a simpler approach. 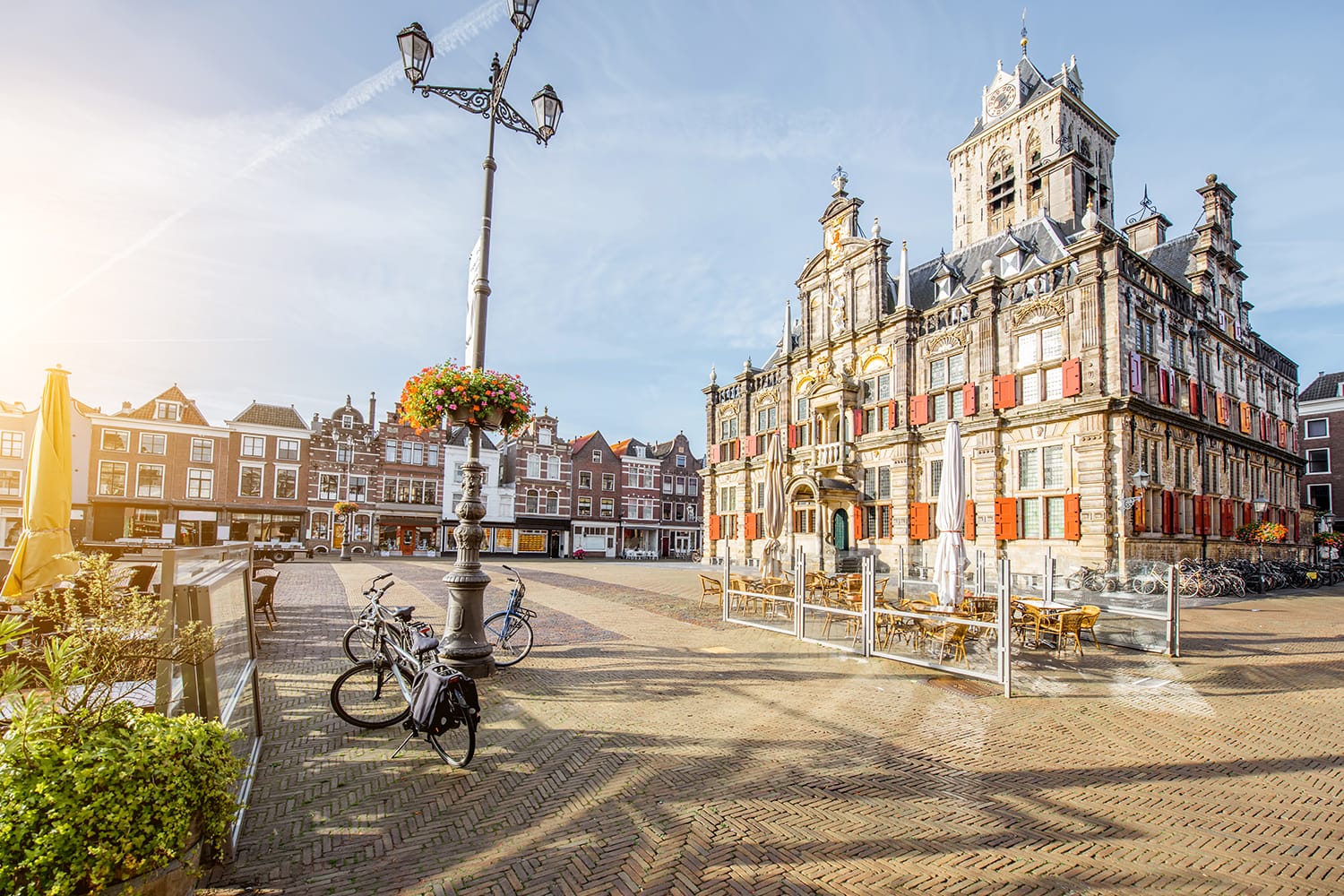 A rising star in the Netherlands, more and more people are being drawn to the modern port city of Rotterdam. Lacking the historical charm of other Dutch destinations, Rotterdam instead impresses travelers with its flair for modern architecture. A great place to start with is the geometric magic of the Cube Houses, they are a sea of bright yellow cubes in which people actually live in. Right nearby is the Market Hall shaped like a horseshoe, with a huge painted ceiling and all sorts of food stalls. Watching over Rotterdam is the Euromast tower and its observation deck which allows you to admire the city skyline from 104 meters up in the air. You’ll find culture too in Rotterdam with places like the Museum Boijmans van Beuningen, an art museum with works by Rembrandt, Van Gogh, and Monet.

Getting there: Rotterdam is a simple 40 minute train journey from Amsterdam. A guided tour on the other hand makes it easy to then move onto nearby destinations like Delft and the Hague. 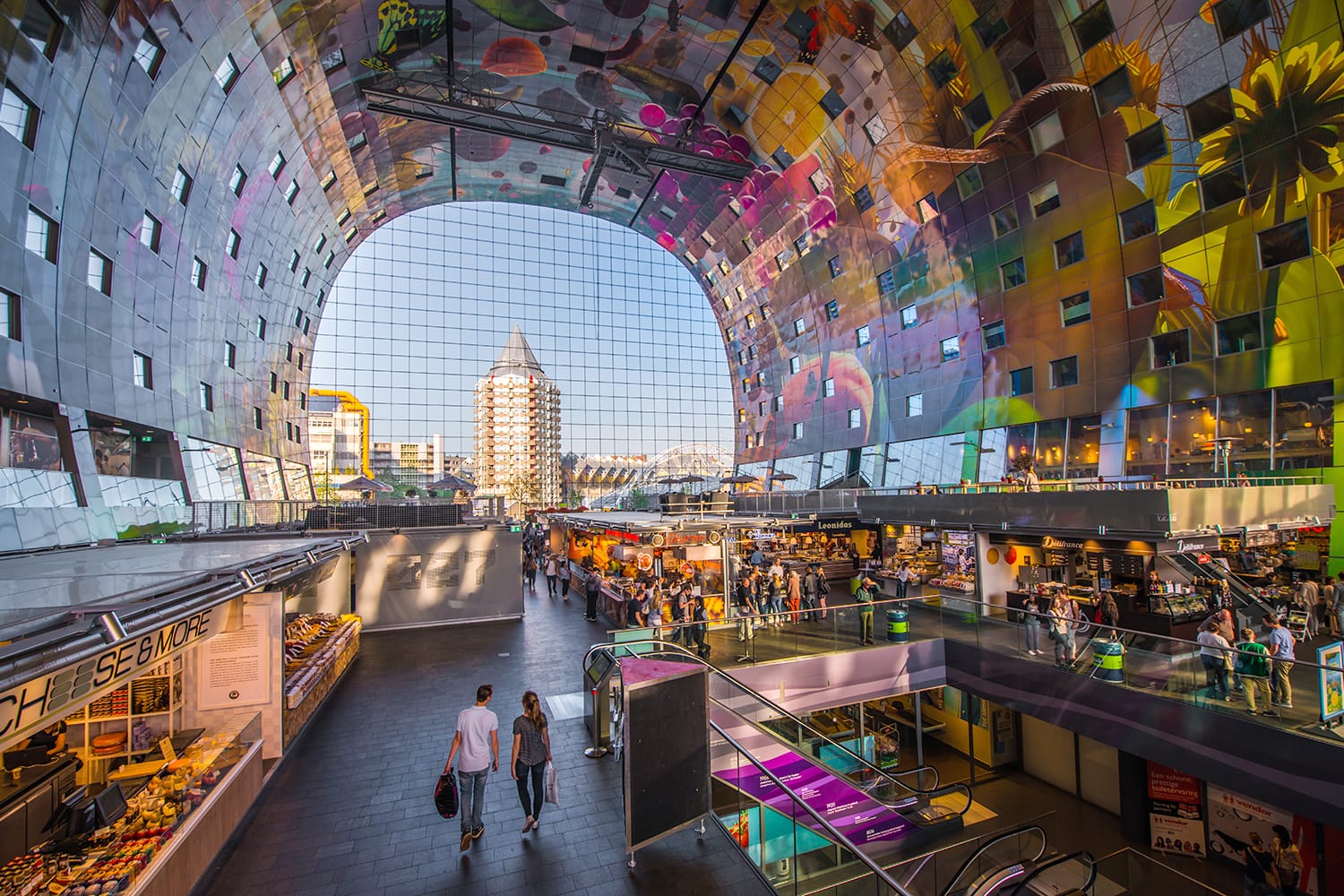 Yet another great city destination in South Holland is the city of the Hague. A city of culture and national importance, the Hague is riddled with museums, art galleries, and major institutions. For instance, you’ll find the Dutch Parliament inside the stately Binnenhof building across the scenic Hofvijver lake. Then there are all the embassies and grand buildings which line the Lange Voorhout boulevard. It’s here that you can see mind-bending art at the M. C. Escher Museum or the classical works in the Mauritshuis. We can’t forget to mention Noordeinde Palace where the Dutch Royal Family lives, nor the Peace Palace which houses the International Court of Justice.

Getting there: Again, one of the easy train trips from Amsterdam, the Hague is only 50 minutes by train from Amsterdam. But to see the Hague as well as Rotterdam in just one day, this multi-city tour is the smart choice. 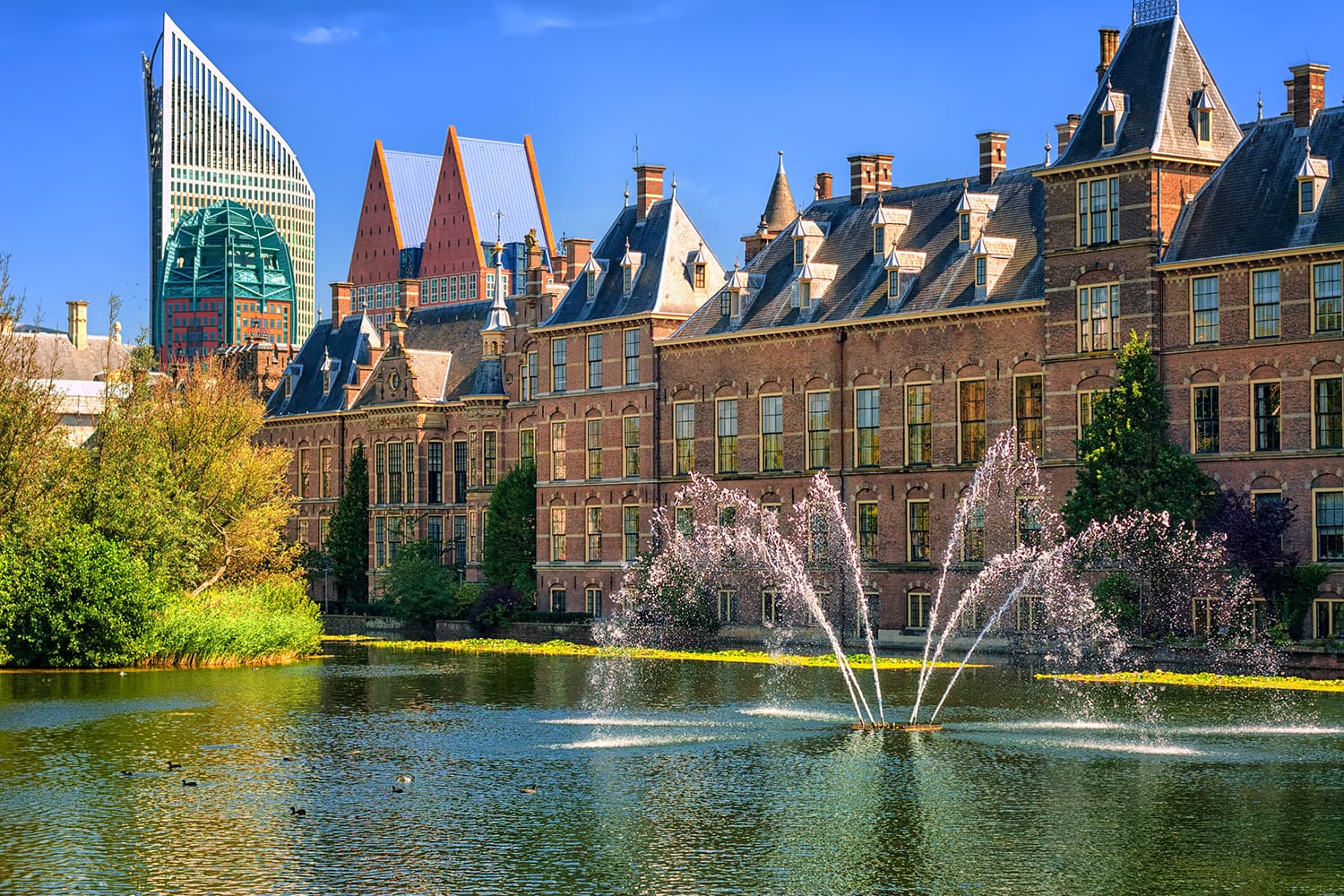 The Netherlands has no shortage of great countryside villages for you to visit, with Edam, Volendam, and Marken being three of the best. Each of these villages shows you what an authentic Dutch village looks like. While Edam may be best known for the local cheese, the village is quite a pretty place for a stroll boasting medieval streets and plenty of canals. Close to Edam, further down the coast, is Volendam, a picturesque fishing village. After a short walk around the harbor you can head into the village’s complex network of streets, finding St. Vincent’s Church along the way. Then there’s Marken, once an island, this fishing village is now packed with quaint buildings, some of them on stilts to cope with rising tides.

Getting there: While each village can be reached from Amsterdam by bus in under 30 minutes, it’s also possible to get between Marken and Volendam by ferry, so you can get out onto the water for a bit. Another, more relaxed way to see all of the villages in one day is on this guided Dutch countryside tour. 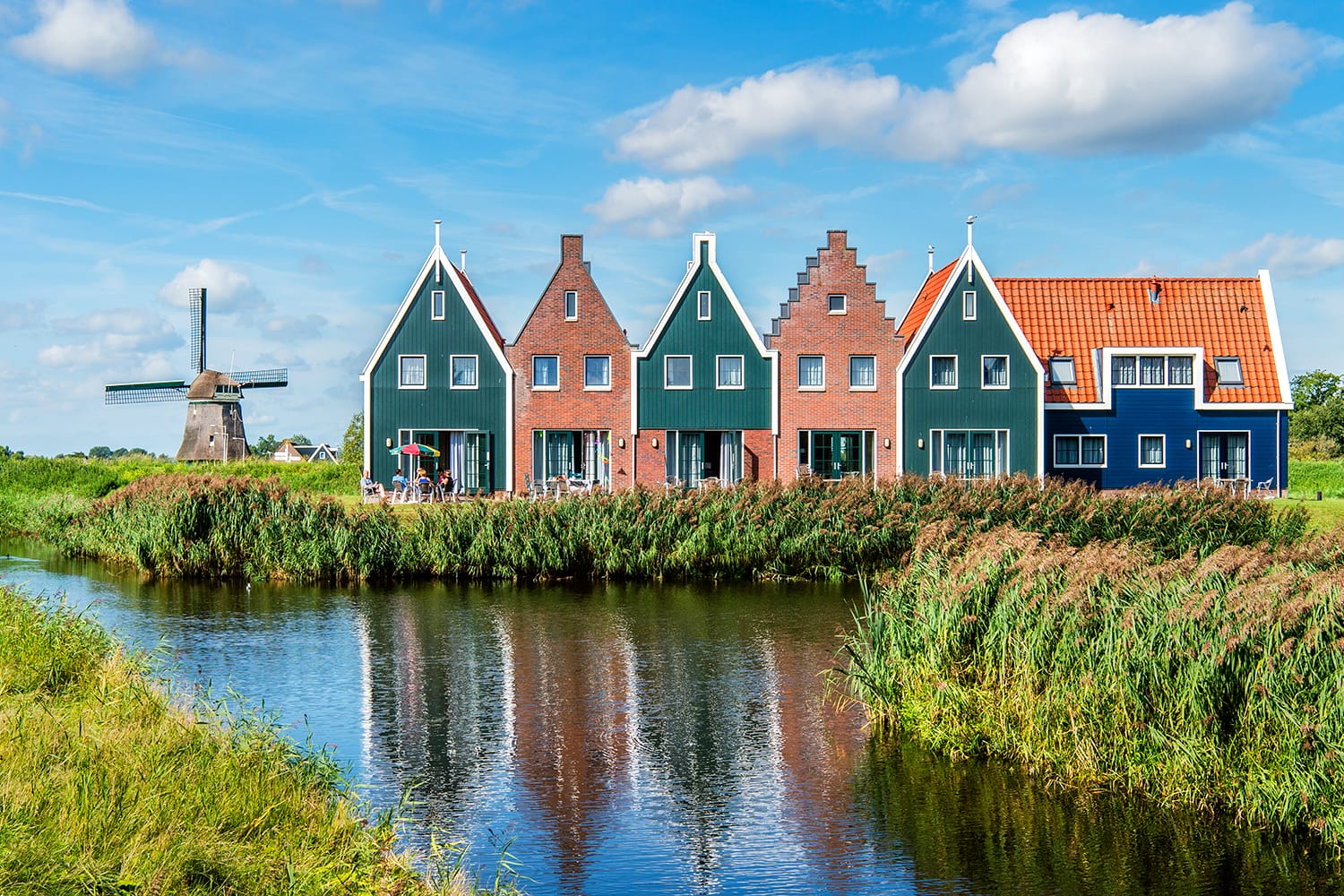 A stone’s throw from Amsterdam, the city of Haarlem may well be one of the best side trips from Amsterdam and one which few actually know about. Full of medieval history and character, Haarlem is a perfect place to further explore the beauty of Holland’s cities. Starting on the Grote Markt square, you’re already surrounded by plenty of interesting sights, not the least of which is the Gothic Grote Kerk cathedral. You can then delve into the local culture and art history at the Frans Hals Museum and Teyler’s Museum. For a great photo, be sure to seek out the Molen de Adriaan windmill and then climb up it to see the rooftops of Haarlem. If you’re tired of sightseeing, why not take advantage of the city’s renowned shopping district full of boutique, independent, and antique stores.

Getting there: Haarlem couldn’t be easier to get to with trains only taking 19 minutes from Amsterdam and running every 15 minutes. 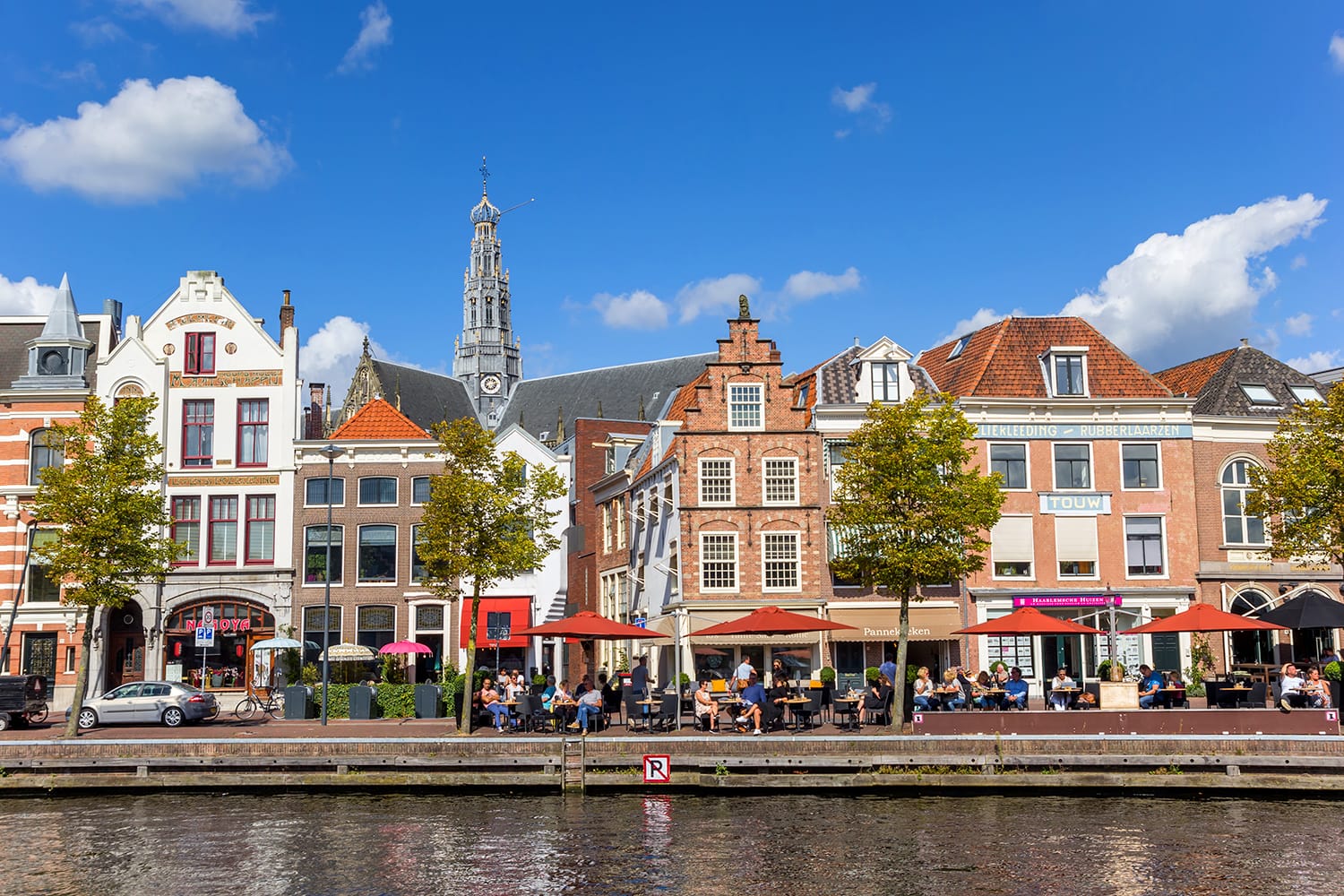 One of the joys of certain parts of Europe such as the Netherlands, is how easy it is to hop over to a neighboring country. Case in point is a visit to charming Bruges, in Belgium, even from Amsterdam this trip is manageable in a day. Coming to Bruges, head for the Markt square where colorful houses sit beside the city’s standout Belfry and Provincial Court. From there it’s a short walk to the Basilica of the Holy Blood, said to house a cloth stained with the blood of Christ. From holy relics to calm canals, you can’t leave Bruges without a cruise down its winding, picturesque canals. Back on land, don’t miss cute spots like the Bonifacius Bridge and Walplein Square, where you can find plenty of delicious Belgian chocolate to taste test.

Getting there: The best way to make the most of your time actually sightseeing is with a guided tour to Bruges. Otherwise, you’re going to spend quite a bit of time, 3 hours 30 minutes, taking the train from Amsterdam via Antwerp. 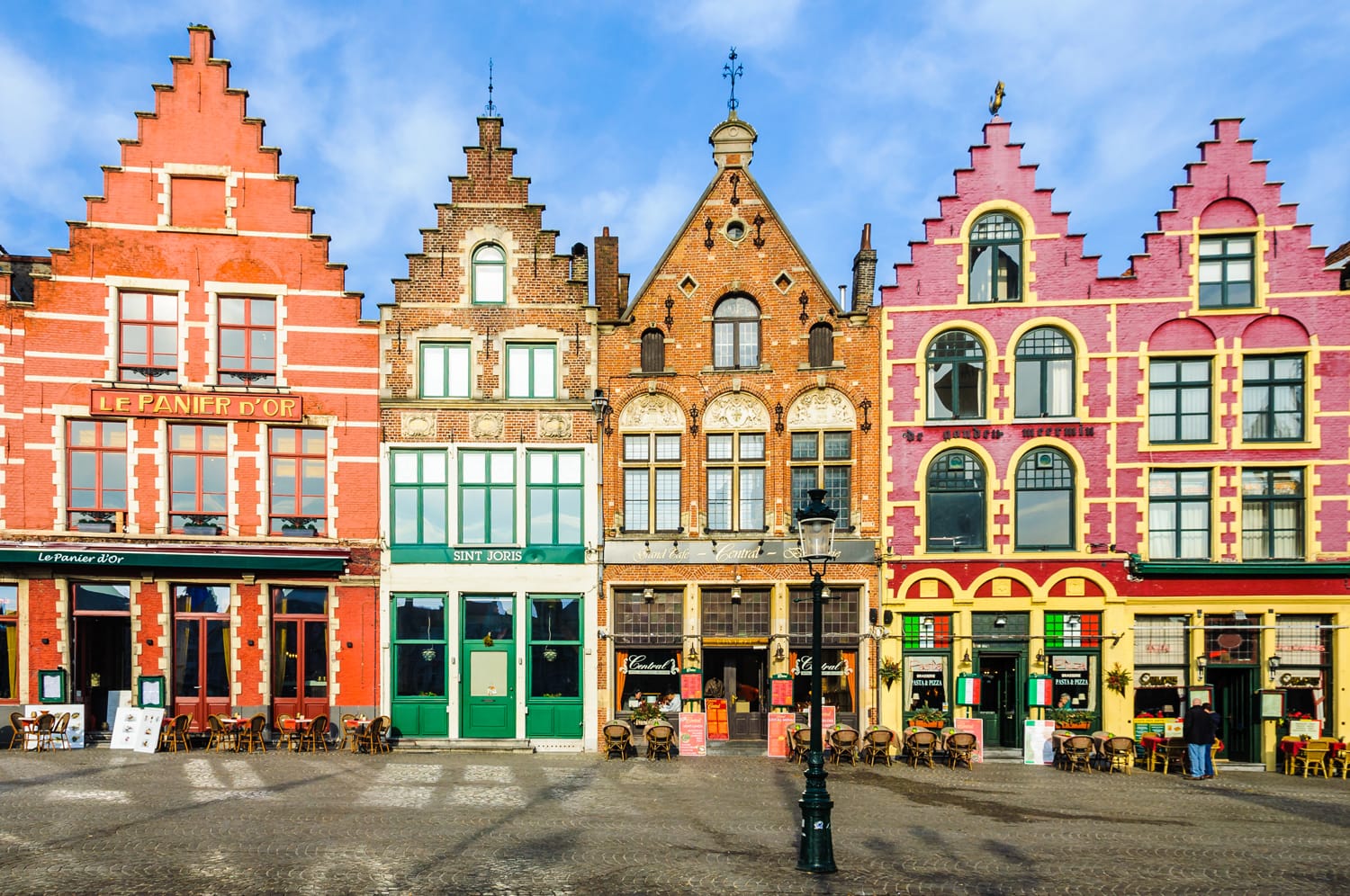 So there you have it – all the best day trips from Amsterdam. From Amsterdam you have the opportunity to explore not only different parts of the Netherlands but also the different elements which make it so wonderful.

And the most beautiful village in the Netherlands is…

Some Cities in the Netherlands Have Less Than 1,000 Residents, Here’s Why