Beaches in Canada may not be the first thing that you think of when imagining a vacation to this northern country. But, as the country with more shoreline than any other in the world, you can be sure Canada has its share of sandy spots to spread your towel. Long Beach is one of the most scenic beaches in Canada located in one of the country’s most stunning natural environments, the Pacific Rim National Park. Long Beach is actually one beach of several that make up the Long Beach Unit. Many resorts and cottages line the shores, with the Wickaninnish Inn being the most famous and luxurious. Long Beach sits between the funky, laid-back town of Tofino and Ucluelet on British Columbia’s Vancouver Island. You have to take two ferries to get to Hornby Island, but the effort is well worth it if you like a tranquil, laid-back island experience.

Around the southern point, at Little Tribune Bay, locals and visitors relax on Hornby’s nude beach. 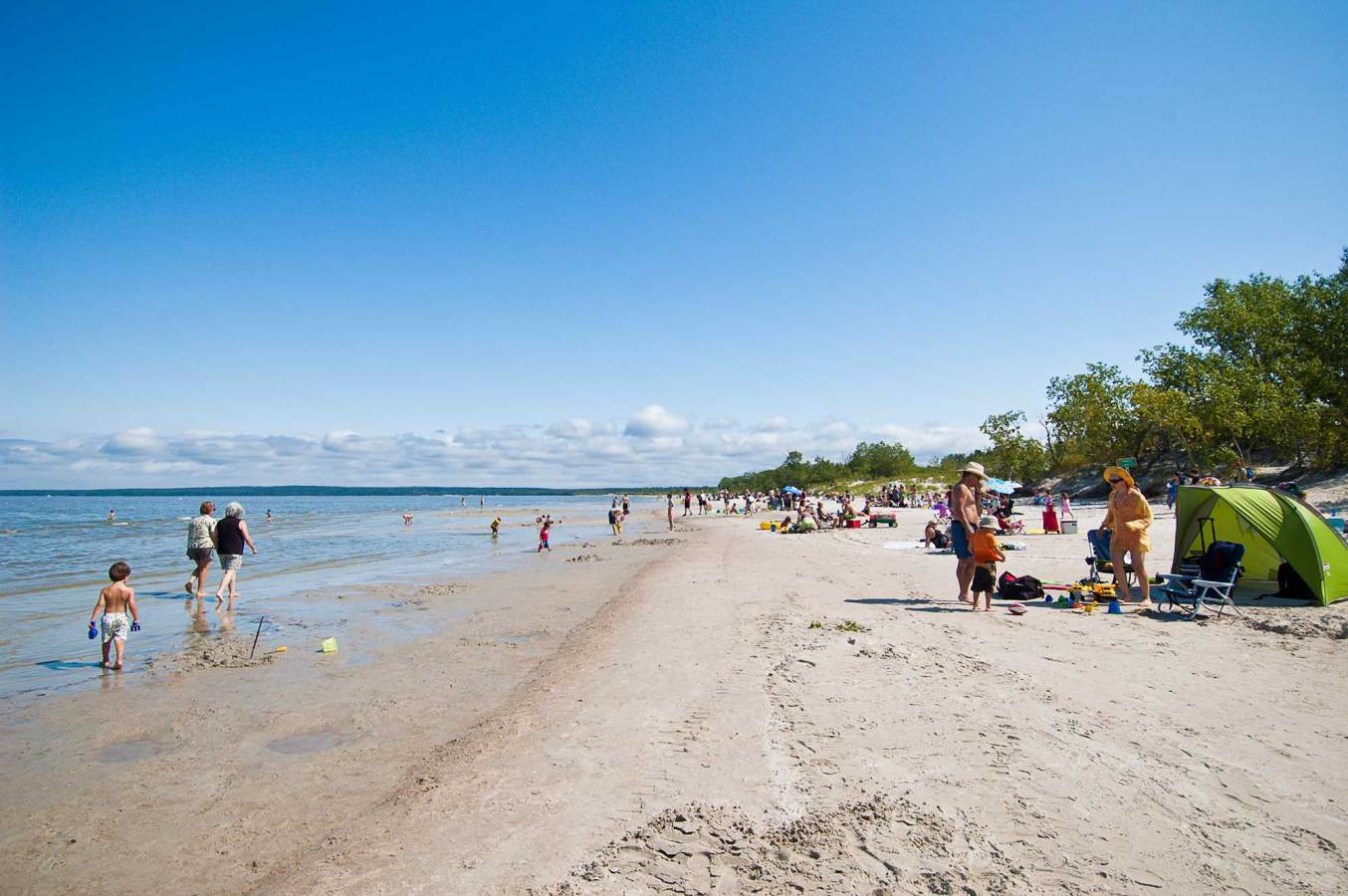 Less than an hour from Winnipeg, Grand Beach has 3 km of fine, white sand backed by 12-meter sand dunes on the edge of the town of Grand Marais in Grand Beach Provincial Park. It sits on the eastern side of Lake Winnipeg, North America’s sixth largest freshwater lake. Fourteen kilometers (8.7 miles) of white sandy beach draws throngs of people to Wasaga Beach every summer. The Wasaga Beach strip is reminiscent of Florida during March Break, with lots of trinket and clothing shops, scantily clad teens and twenty-somethings, but there are also plenty of quieter spots along the beach and cottage rentals are plentiful. Sandbanks Provincial Park comprises three beaches with loads of dunes and sandbars that is a delight for kids. Camping is available but ​you should book way in advance. Sandbanks is located in Prince Edward County, a charming region of Ontario that has an abundance of organic farms, wineries and antique shops. Like Wasaga Beach, Sauble Beach is high on the teen and twenty-something radar as a party destination. But with 11 km of pristine sand, good wind and kite surfing, golf, fishing, an amusement park, restaurants, and some of the best sunsets in Ontario, Sauble is attractive to a wide variety of people. Families looking for quiet may want to explore some of the cottage rentals out of the center of town. The Magdalen Islands are an archipelago of a dozen islands with over 300 km of beach in the Gulf of the St. Lawrence. The temperate maritime climate means mild winters and summers, with warm water temperatures through September. The sandstone cliffs and sand dunes lend drama and interest to the coastline. The warm, salty waters off of Parlee Beach draw crowds of people in the summer months – sometimes 25,000 people visit the 1 km long beach in one day. The beach offers many facilities for its throngs of visitors, including washrooms, change rooms, lifeguards and daily scheduled sports activities. Top off your day at the beach in nearby Shediac – the Lobster Capital of the World. Part of Prince Edward Island National Park, Brackley Beach is just 15 mins outside of the provincial capital, Charlottetown. Miles of sandy beach and majestic sand dunes are the big attractions here, but nearby attractions include restaurants, galleries, and the province’s only drive-in theatre. The national park also features wetland, forest, and sandstone cliffs.